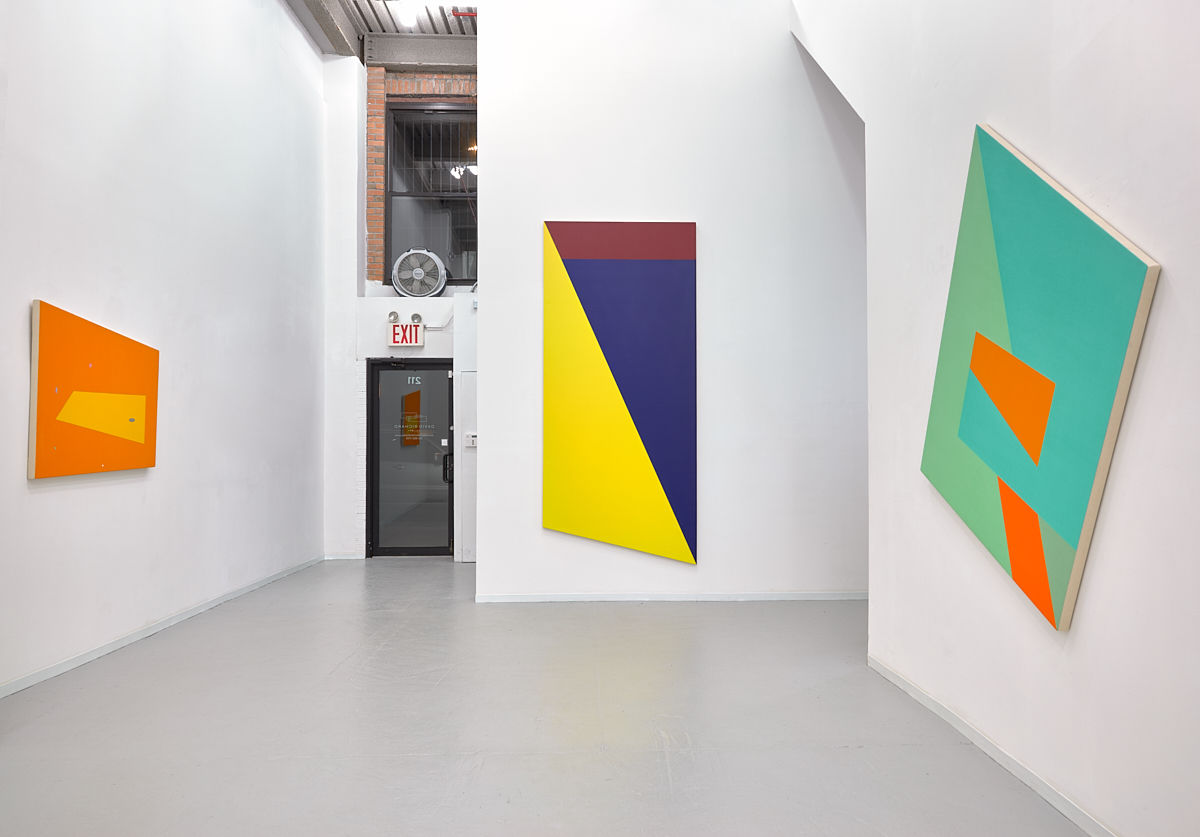 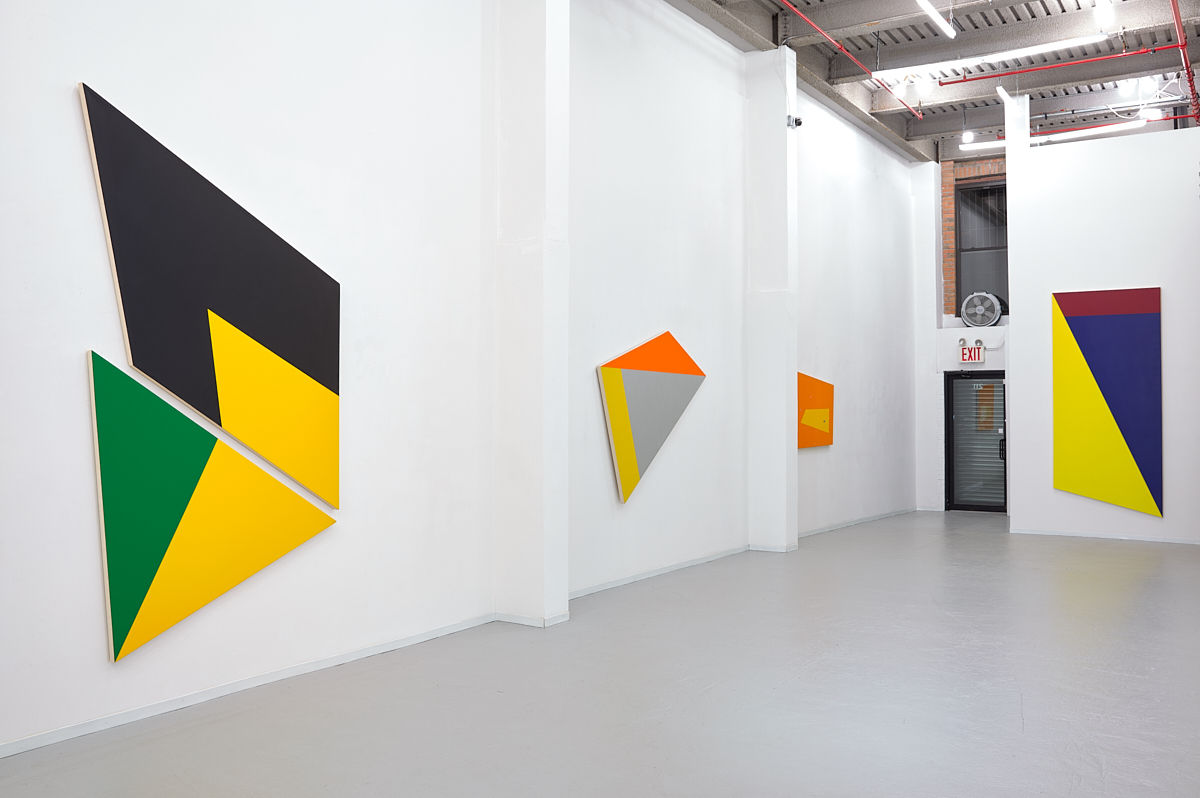 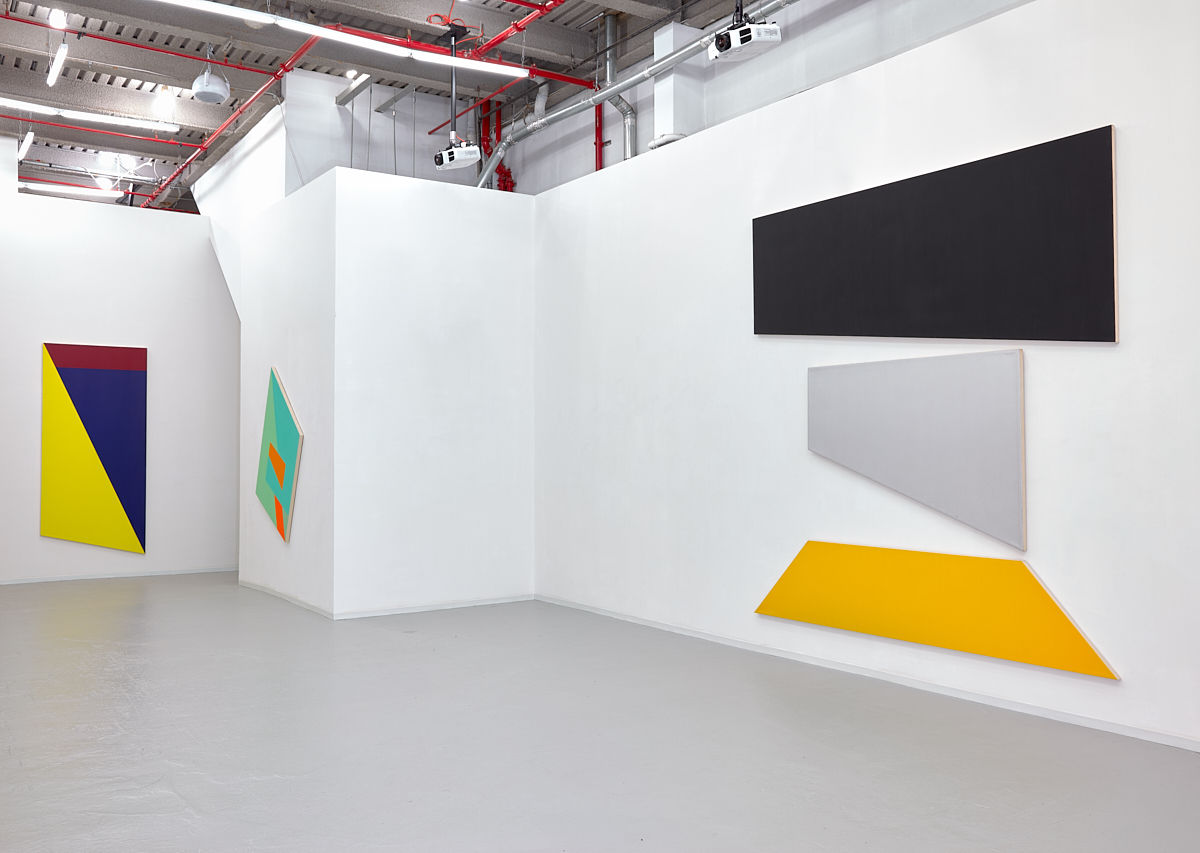 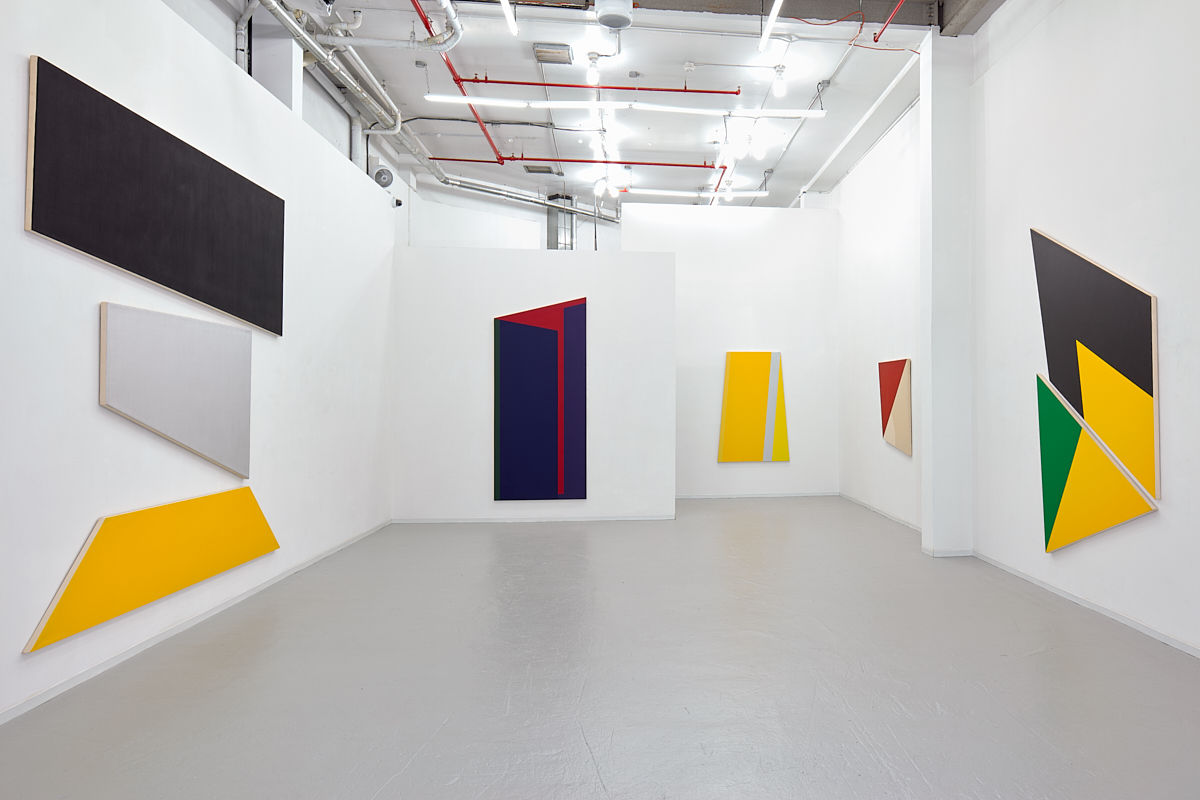 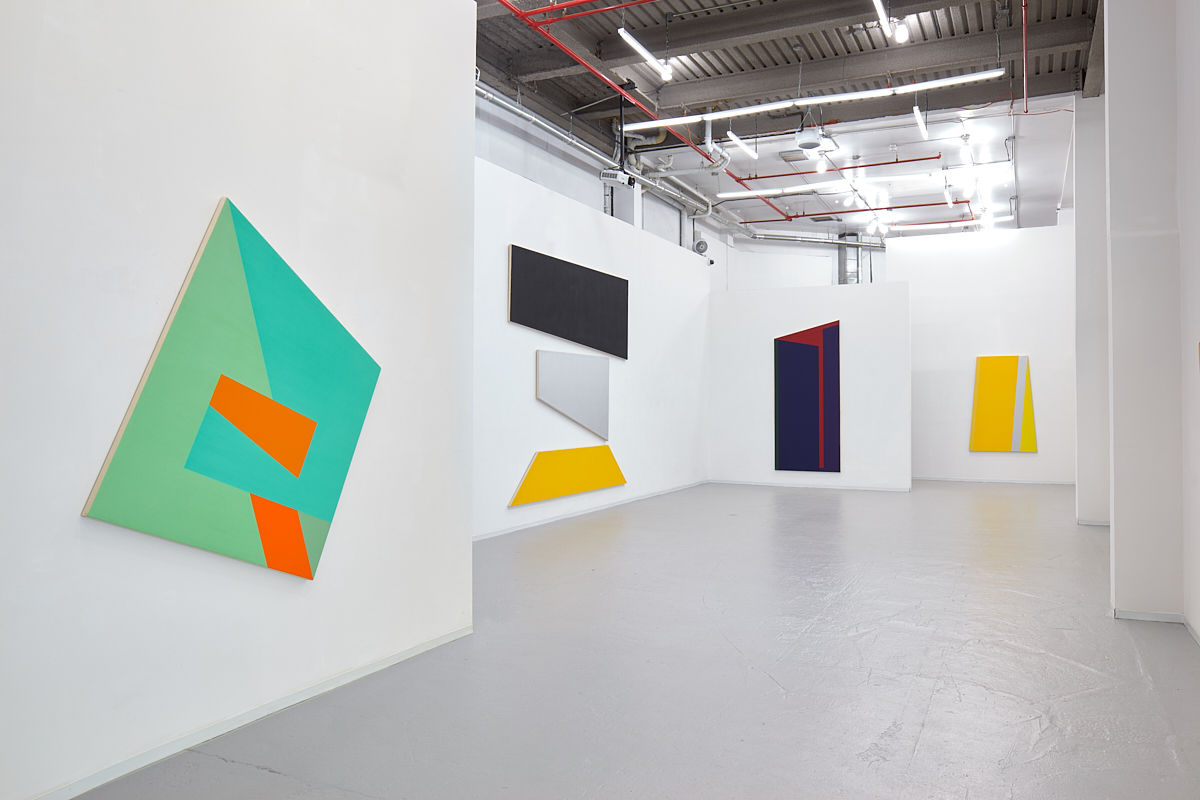 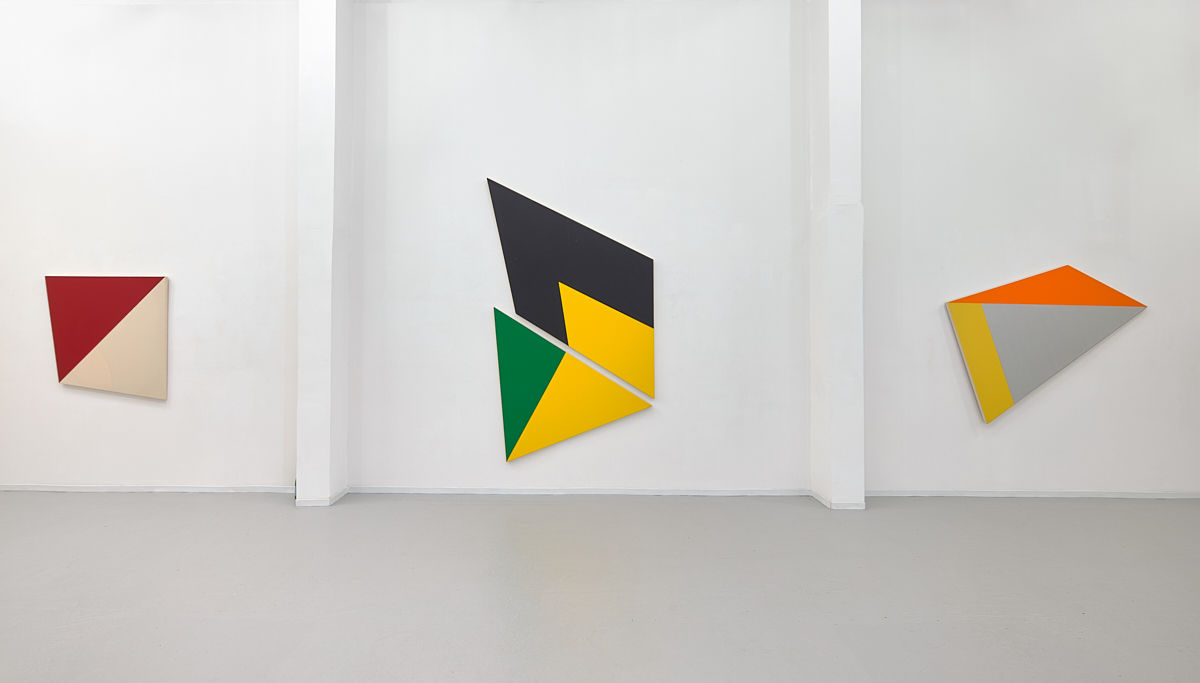 The current presentation, Dimensional Space, focuses on rectilinear forms with slanted and angled perimeters at the intersection of vector geometry, reductive planar shapes, minimal palettes and shaped canvases to create illusions of extreme perspectival and three-dimensional space in a two-dimensional picture plane.

This presentation, together with the Gallery’s previous solo exhibition for Valledor in 2018, Curved, which focused on the curvilinear and circular shapes as well as multi-component canvases from the 1950s through the 80s, make clear the importance of Valledor’s paintings as the channel for his life-long pursuit of geometry and color and fusion of the complexity of space, rhythm of jazz music and awareness of poetry using his unique visual language in pictures. Quite simply, those elements defined Valledor’s career: initially as part of the Bay Area Beat Scene in the Fillmore district, then Park Place Gallery and artist collective in New York in the 1960s, then back in his hometown of San Francisco for the remainder of his career. Valledor thought that the paintings from the 1980s represented the pinnacle of his painting career; they were the culmination of his decades of explorations in visual art and his passion for and the influence of music and poetry on his art making practice. The paintings in the current presentation, Dimensional Space, were produced in that final decade before he passed away far too young in 1989, but more specifically, from the first half of that decade in the years1980 through 1984.

Leo Valledor (1935-1989), a Filipino-American artist who grew up in the Fillmore district of San Francisco, studied Abstract Expressionism at the California School of Fine Arts (currently, San Francisco Art Institute) and was part of the “Beat” scene—the cross cultural and dynamic fusion of visual art, jazz music and poetry. He exhibited his artwork at the 6 Gallery in San Francisco from 1954 to 1957 alongside Jay de Feo, Manuel Neri and Peter Forakis, among others. His first exhibition was the same year and location of Alan Ginsberg’s first public reading of his poem, Howl.

The late 1950s marked a dramatic shift in Valledor’s art to a reductive palette and simple geometric shapes. In 1961 he moved to New York and in 1962 was a founding member of the Park Place Group, an artist collective and exhibition venue for experimental art in Lower Manhattan. The founding members, many also transplants from the West Coast, were comprised of five painters: Dean Fleming, Tamara Melcher, David Novros, Edwin Ruda, Leo Valledor and five sculptors: Mark de Suvero, Peter Forakis, Robert Grosvenor, Anthony Magar and Forrest Myers. The gallery director was Paula Cooper. The group formed to explore their mutual interest in literal and illusory space, music and social concerns. In New York, Valledor’s new minimalist tendencies were appreciated by and exhibited with Sol Le Witt, Robert Smithson, Ed Ruda, Mark di Suvero, Peter Forakis and Tamara Melcher, among others. In 1968, Valledor returned to San Francisco where he continued to explore his unique abstract painting that extended musical harmonies and rhythms to shaped canvases and colors.