Lenz Geerk’s third solo show with the gallery is a deeply psychological exploration of the complexity of desire. Simmering tension permeates every work. Illicit relationships unfold on borrowed time against the sun-drenched light of summer. Geerk explores the shifts from attachment to separation, between closeness and distance, and fuses perception with touch by suggesting an edge that is loath to reveal itself completely. We wonder about, then question, what each relationship means. 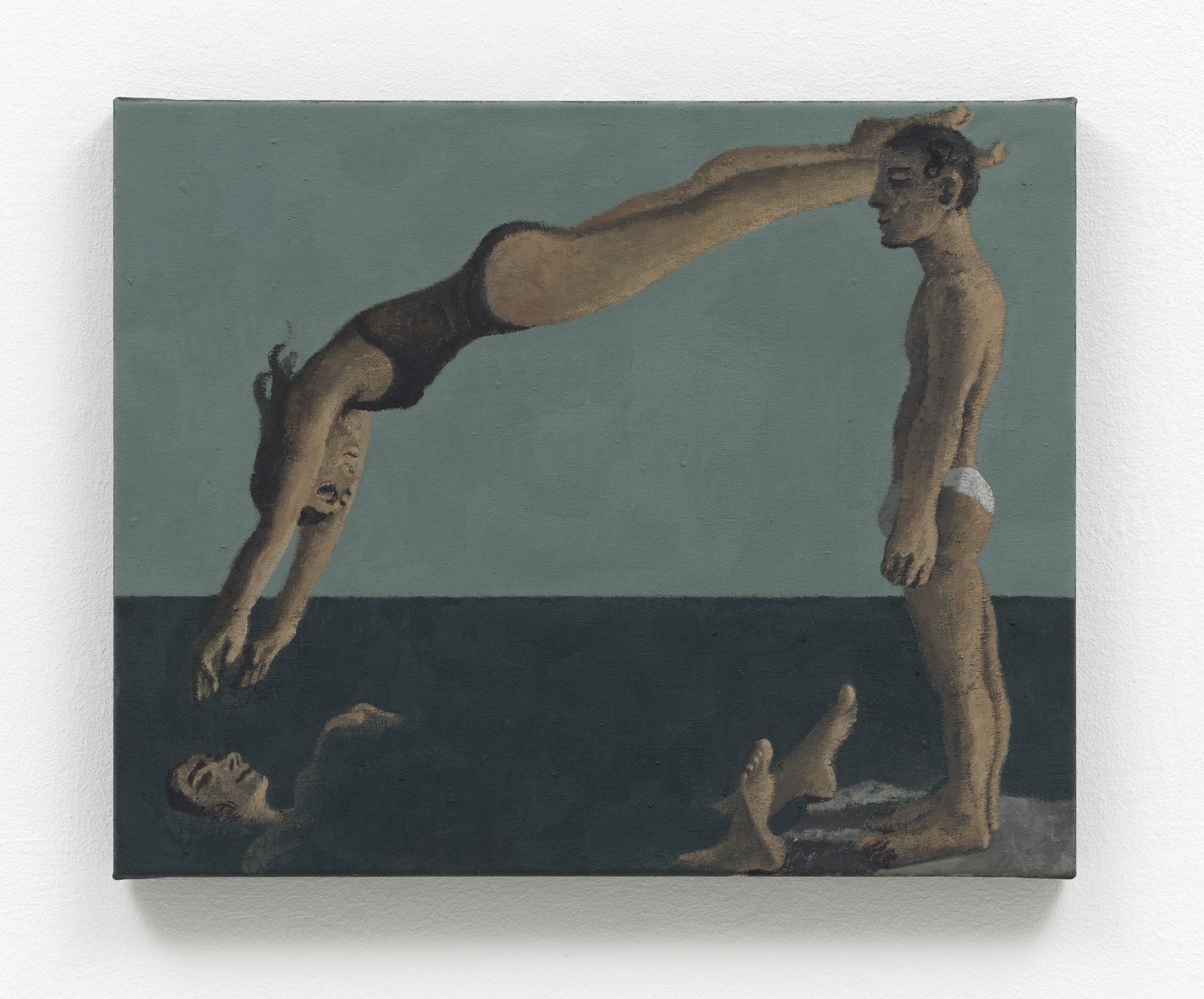 The exhibition is like experiencing a dreamy, beautiful, unsettling coming-of-age story, not unlike Luca Guadignino’s Call Me By Your Name (2017), Barry Jenkins’ Moonlight (2016) or Abdellatif Kechiche’s Blue is the Warmest Color (2013), set against the lush backdrop of Godard’s noirish Pierrot le Fou (1965).

The use of the beach conveys a continuous experience of space, through the implementation of a nearly-abstracted compositional arrangement, and explores relationships between artist, subject, and viewer. This significant motif is key to understanding Geerk’s new work. Unlike the paintings in The Table Portraits (2018) and Mixed Blessings (2019), his first two solo shows with the gallery which emphasized sensuous curves and rippling forms, the works on view are notable for their strong architectural compositions.

Together, Beach Couples form an obvious grouping: identical in scale with a cool blue-gray palette, they all display a pictoral field neatly divided into parallel lines of beach, sea, and sky. Visual depth is achieved by the diagonal positions of his subjects, whose branching, overlapping forms add emotion and complexity to the rigid structure of each painting. This exploration of line and form is further continued in oversized paintings of postcards.

As to his subjects, Geerk takes license with his fictional characters, setting them within imagined scenes of his own making. There is nothing self-consciously aspirational about them. They aren’t from anywhere specific. They just are. It invites us, as viewers, to speculate wildly.

On occasion, he alludes to art historical references though he doesn’t represent the exact reference itself, just his vision of it. Falcon (2022) embodies the spirit of Eugène Delacroix’s La Liberté guidant le peuple (1830) while retaining the cool detachment of Lynette Yiadom-Boakye’s The Ever Exacting (2018). Hotel II (2022) hints at Édouard Manet’s La Lecture (1865), without the cloying sweetness, while Moon Couple (2022) echoes the waves of Utagawa Hiroshige’s Six Jewel Rivers from Various Provinces (1857). Geerk’s work stylistically mirrors the sensibility of Baroque Old Masters—Artemesia Gentileschi’s expressive portraits come to mind—but manages to showcase a technique that is recognizably his own.

Twin themes of intimacy and estrangement are reoccurring themes in Geerk’s body of work. His paintings are full of long pauses and quiet moments, which conceal the emotional turmoil illustrated within. The liberal use of nudity is not inherently sexy, rather, it’s a sexiness by proxy, a psychological game of hide and seek where all participants thoroughly enjoy the experience. Every character, every participant, every painting offers us different views of their, and our, experience.

Geerk manipulates traditional techniques to bring distinct render to acrylic color, creating psychologically-charged paintings that are removed from any specific time or place. Emphasizing his subjects in such a way as to draw out the hidden emotions of the human psyche, Geerk depicts people at the threshold of excitation and in the throes of exploration. With postures and gestures crafted through a fictionalized lens of representation, Geerk imagines how a certain fragile moment can be expressed through atmosphere and gesture. The restrained palettes add to the aura of emotional tension, transporting the viewer into his otherworldly universe.

Arrival is the artist’s third solo show with Roberts Projects. In conjunction with the exhibition, the first monograph surveying the artist’s career, Paintings, Prints and Ceramics 2018-2021, will be released. The catalogue provides an in-depth overview of the artist’s oeuvre, as selected by the artist, illustrating rarely-seen paintings, as well as early ceramics, etchings and works on paper from Geerk’s archive.