Alison Jacques presents the second of two exhibitions by pioneering textile artist Lenore Tawney (b. 1907, Lorain, Ohio; d. 2007, New York). Part two features rarely seen assemblages and collages from Tawney’s later years, as well as a monumental ‘Cloud’ installation that has not been exhibited since 1978. The two sequential exhibitions, Tawney’s first in the UK, follow a landmark survey at the John Michael Kohler Arts Center, Wisconsin (2019). 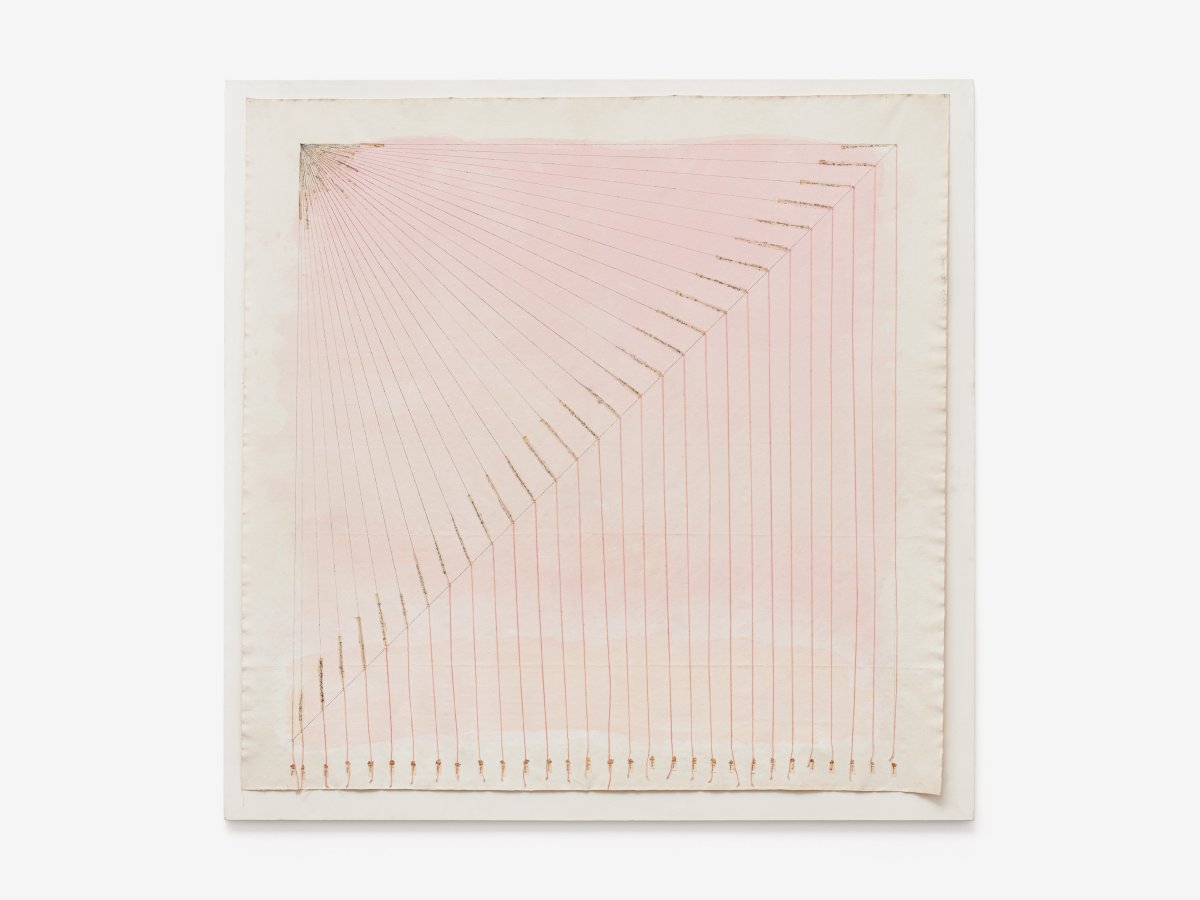 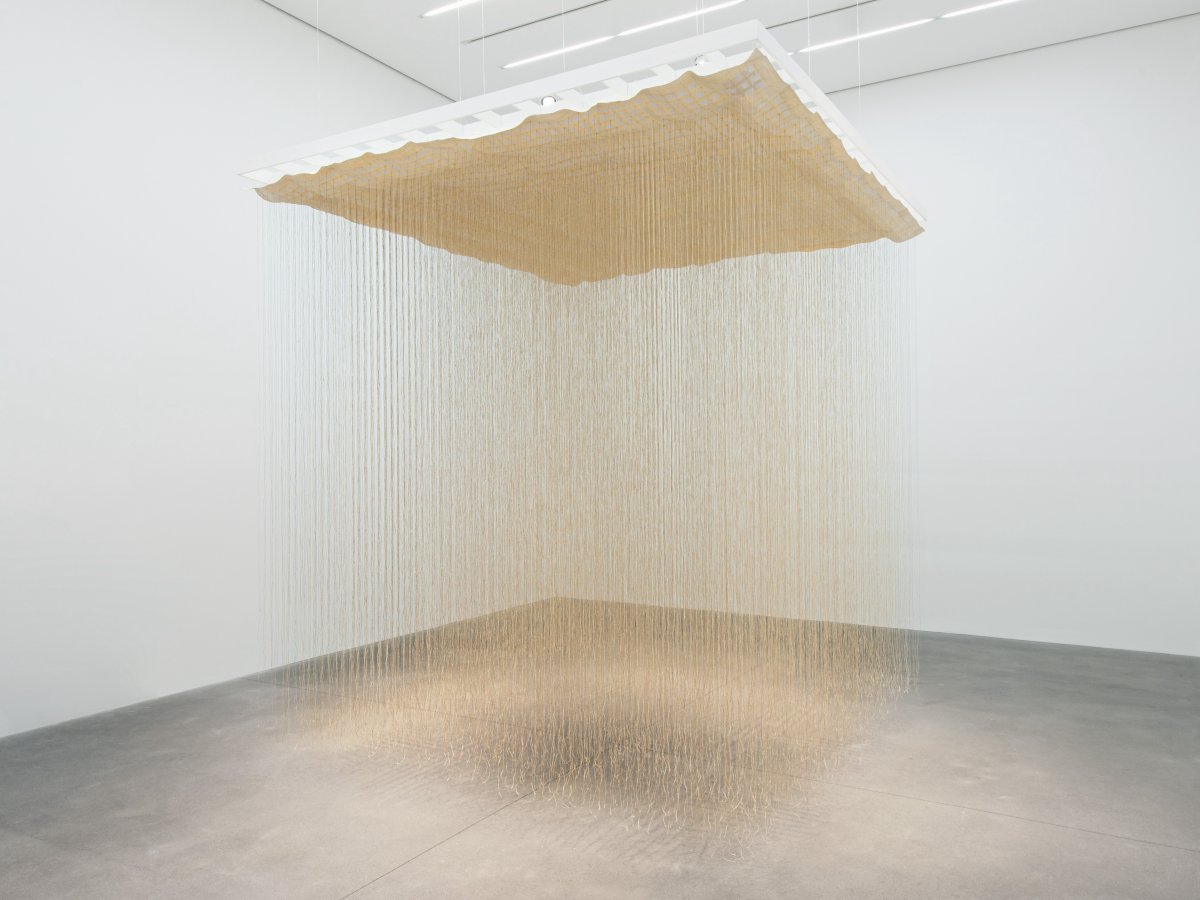 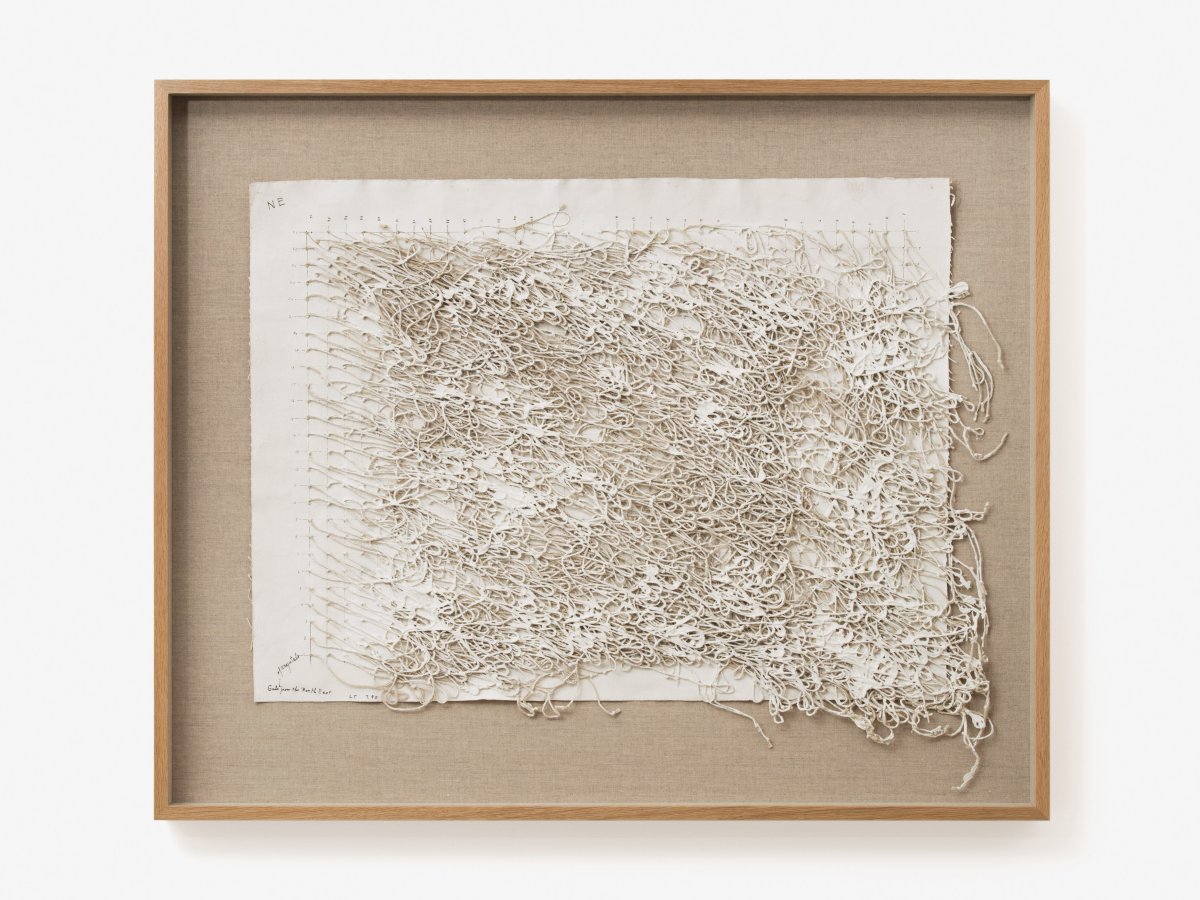 Lenore Tawney
Gale of Crystals from the North East, 1990 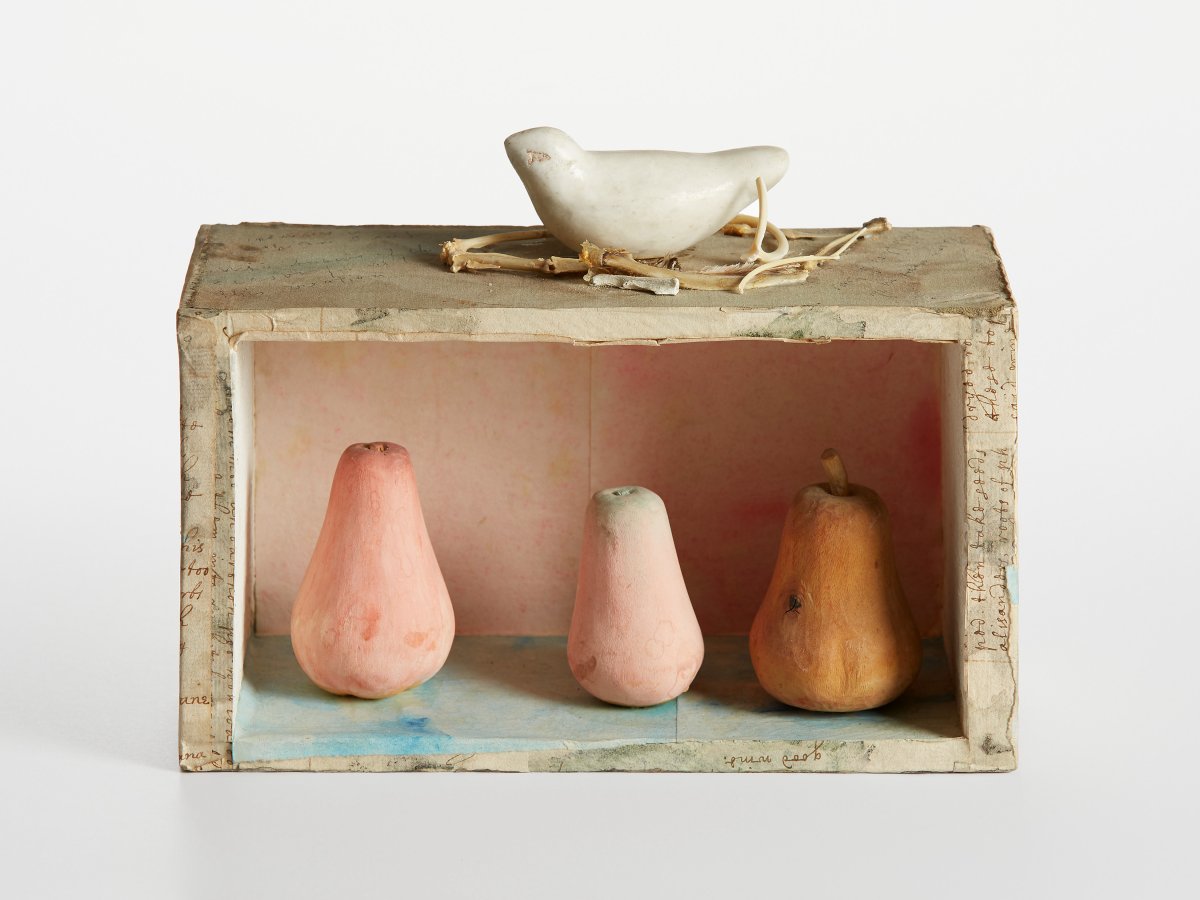 Lenore Tawney
And Whom Is My Dearest One, 1988 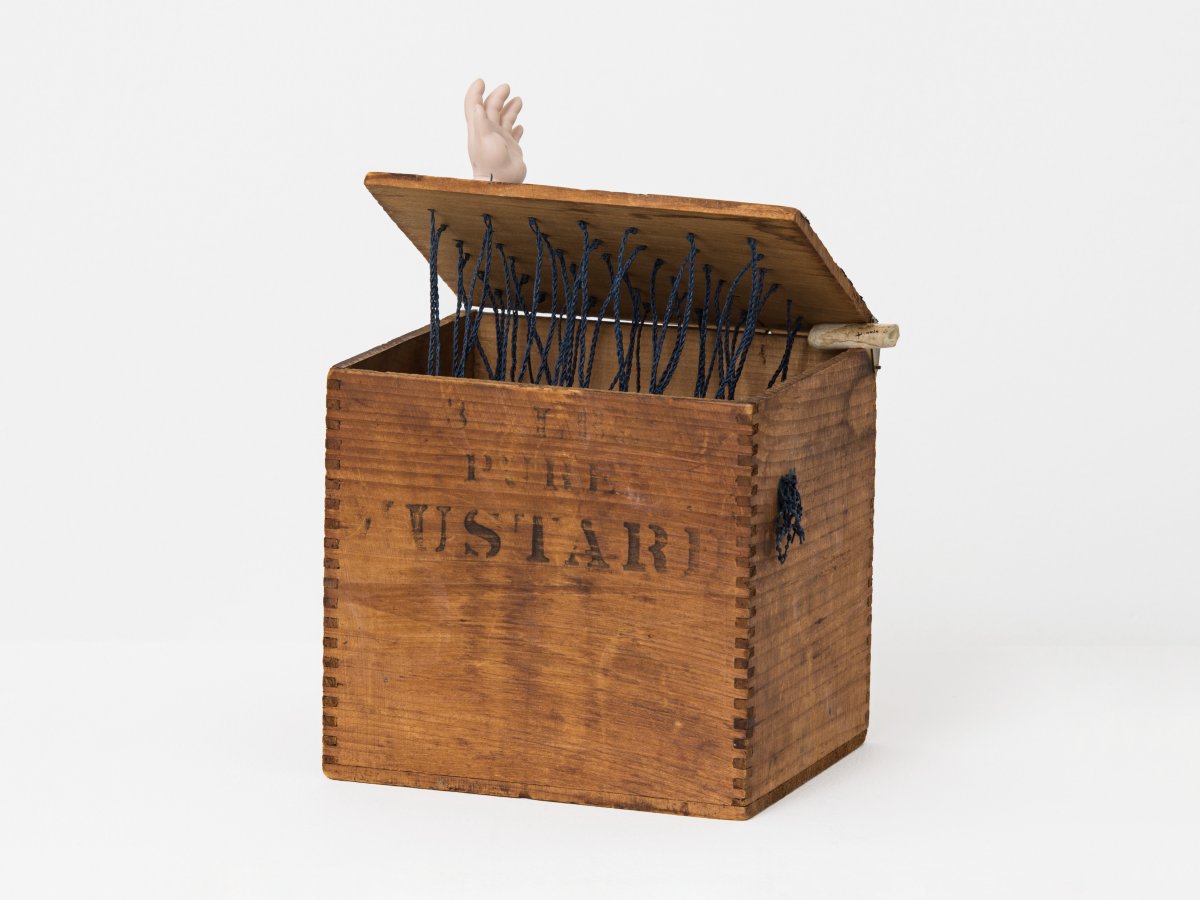 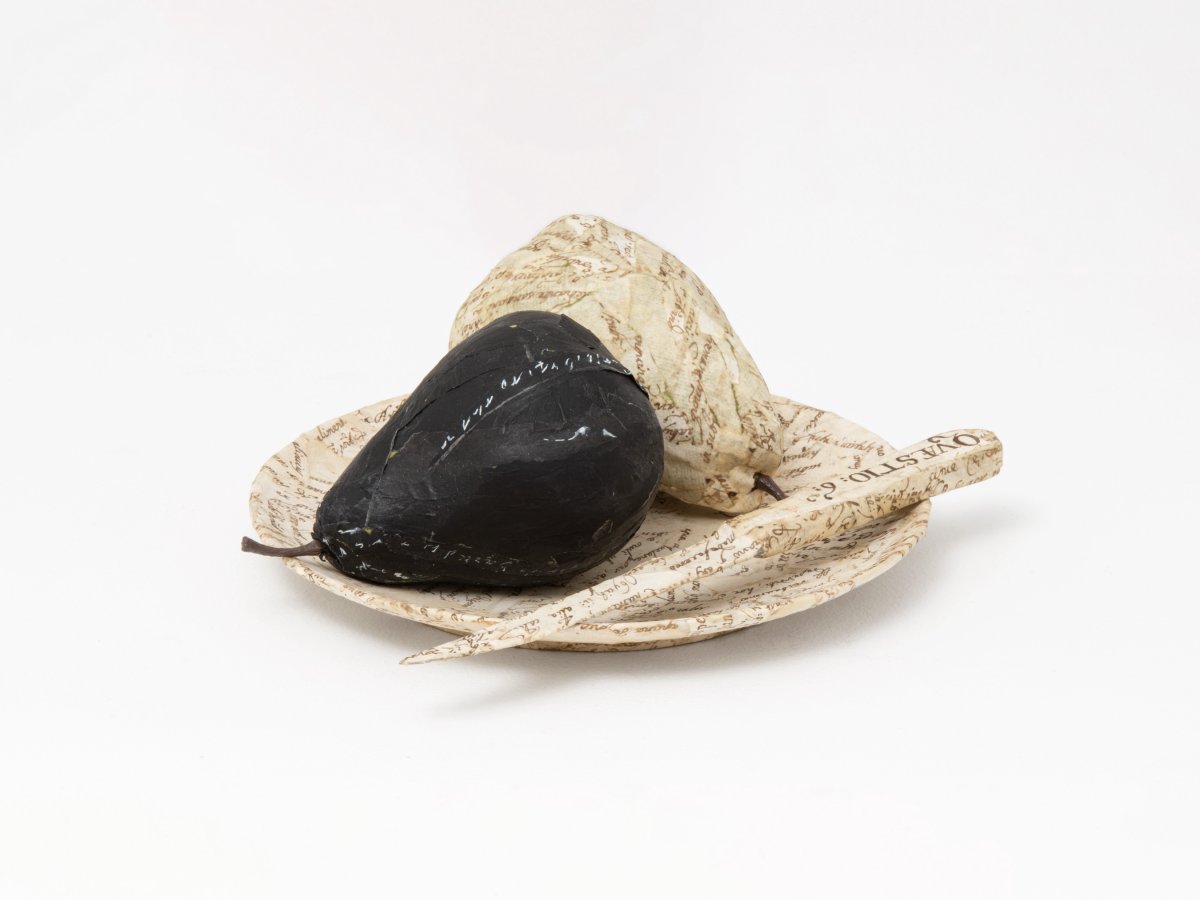 Lenore Tawney
Or to an Illegible Stone, 1989 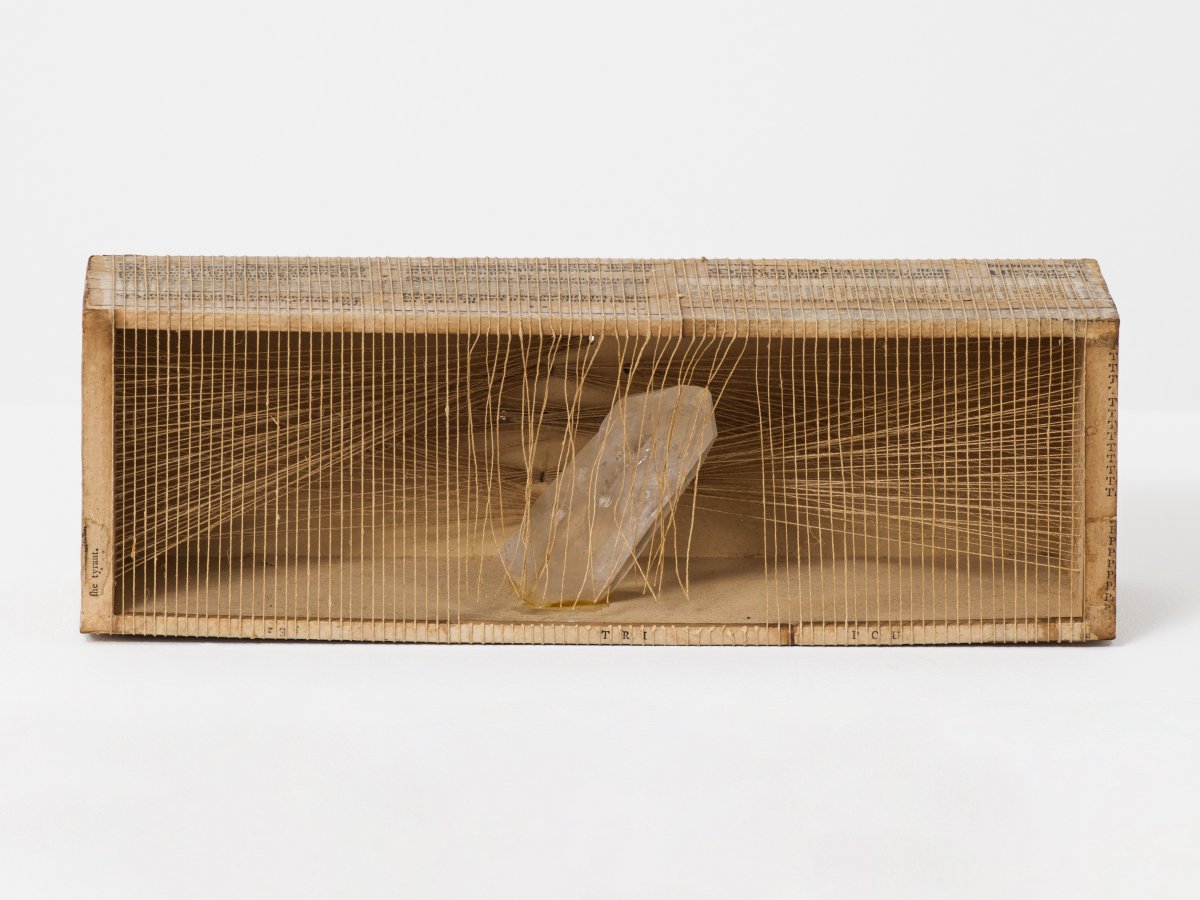 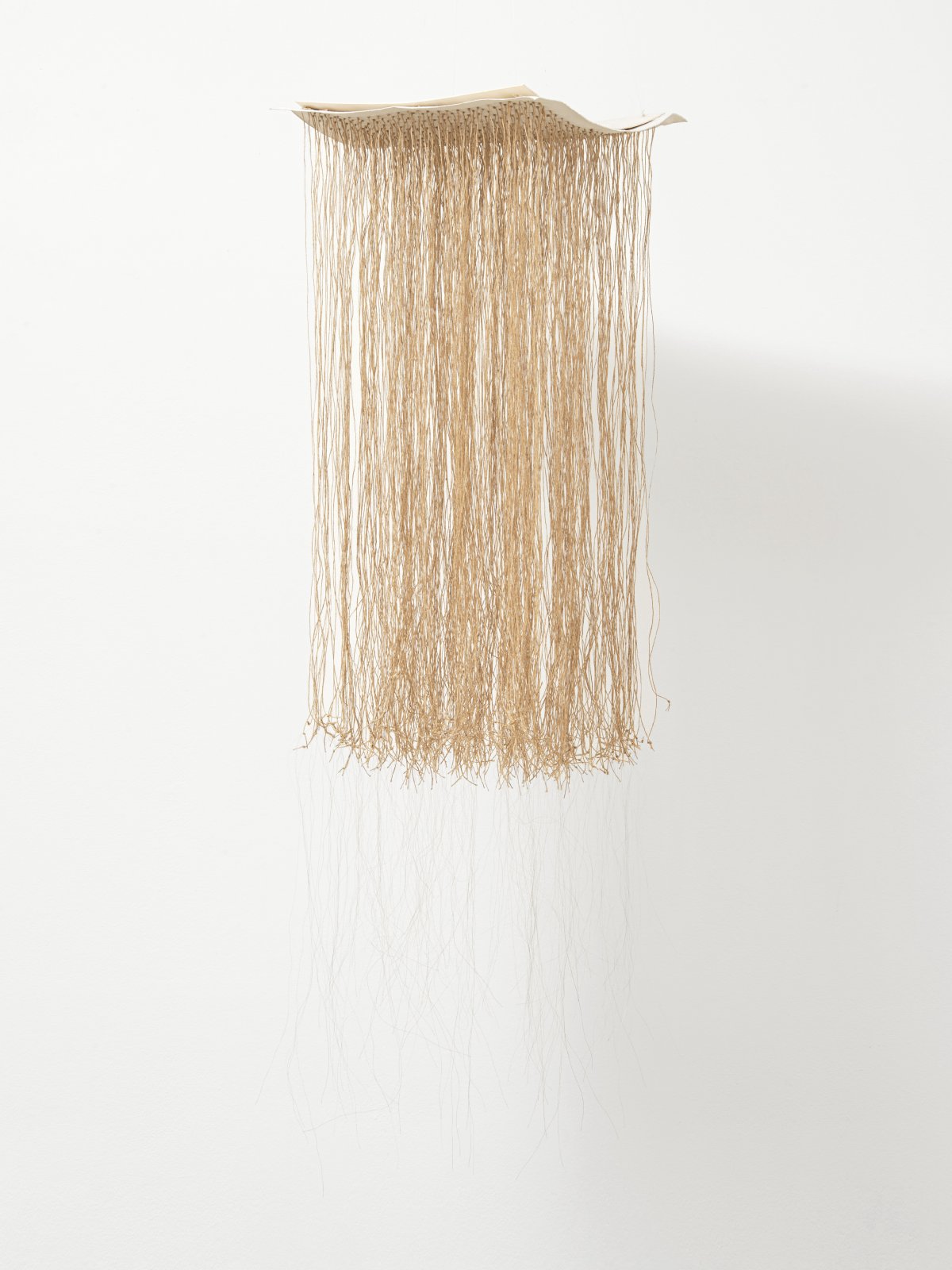 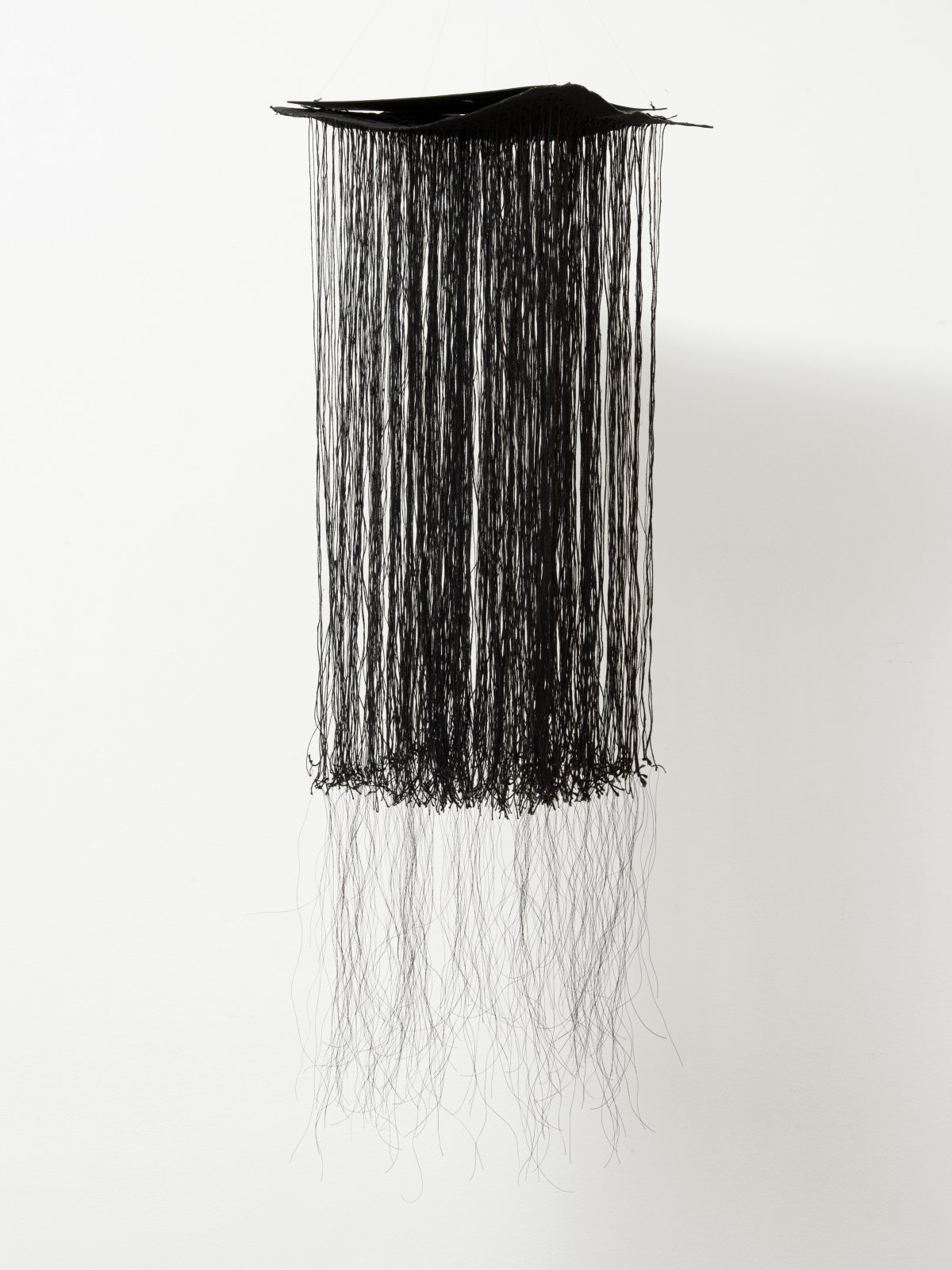 Lenore Tawney
The Lilies Have Frozen and the Lake is Dark, 1993 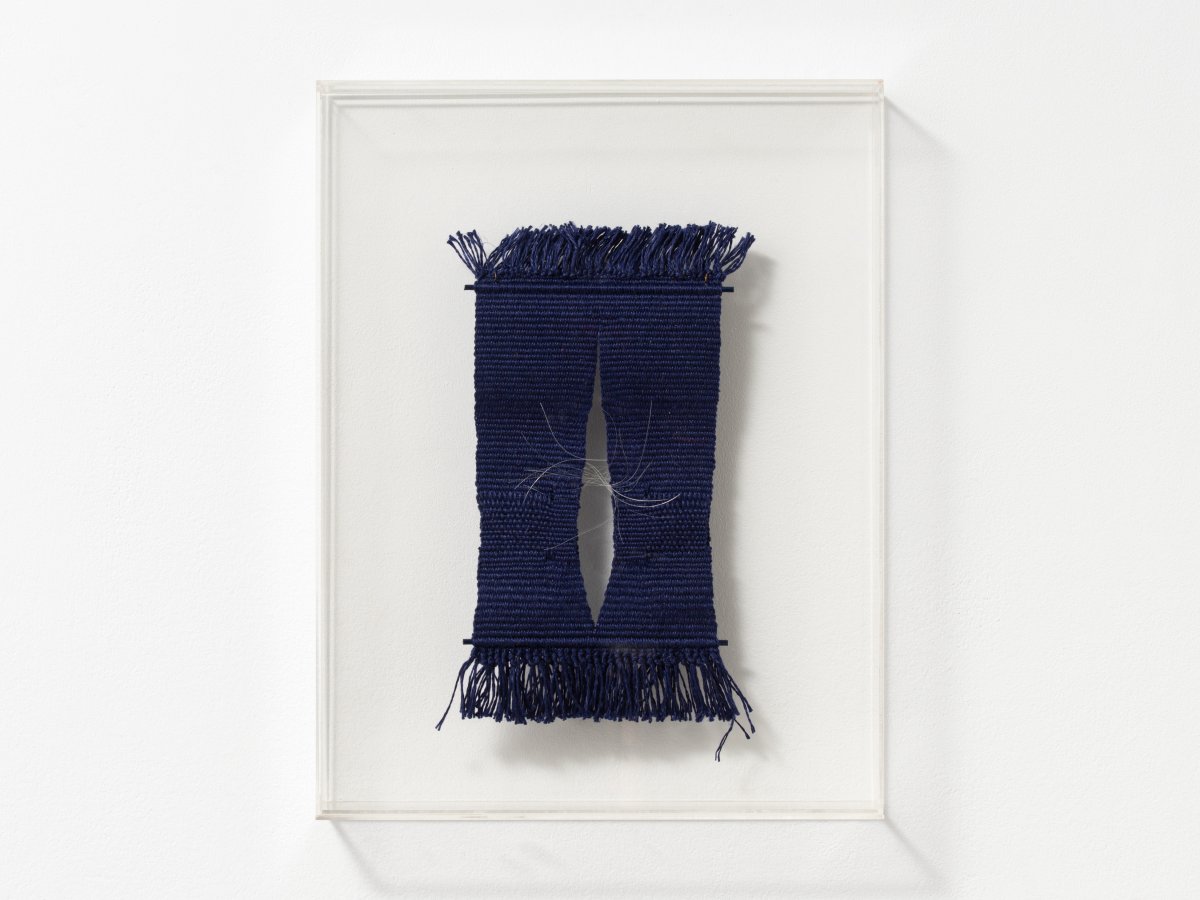 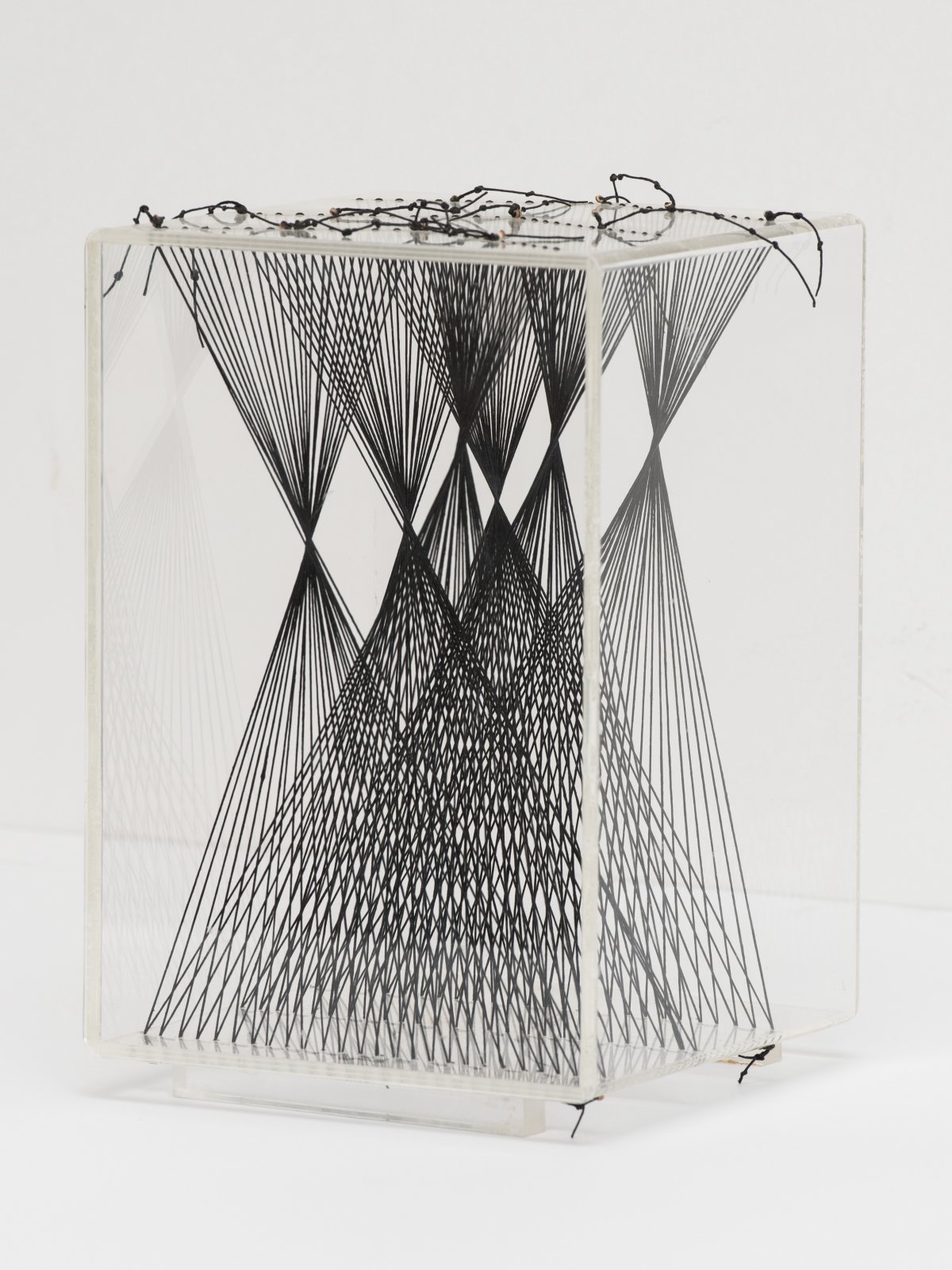 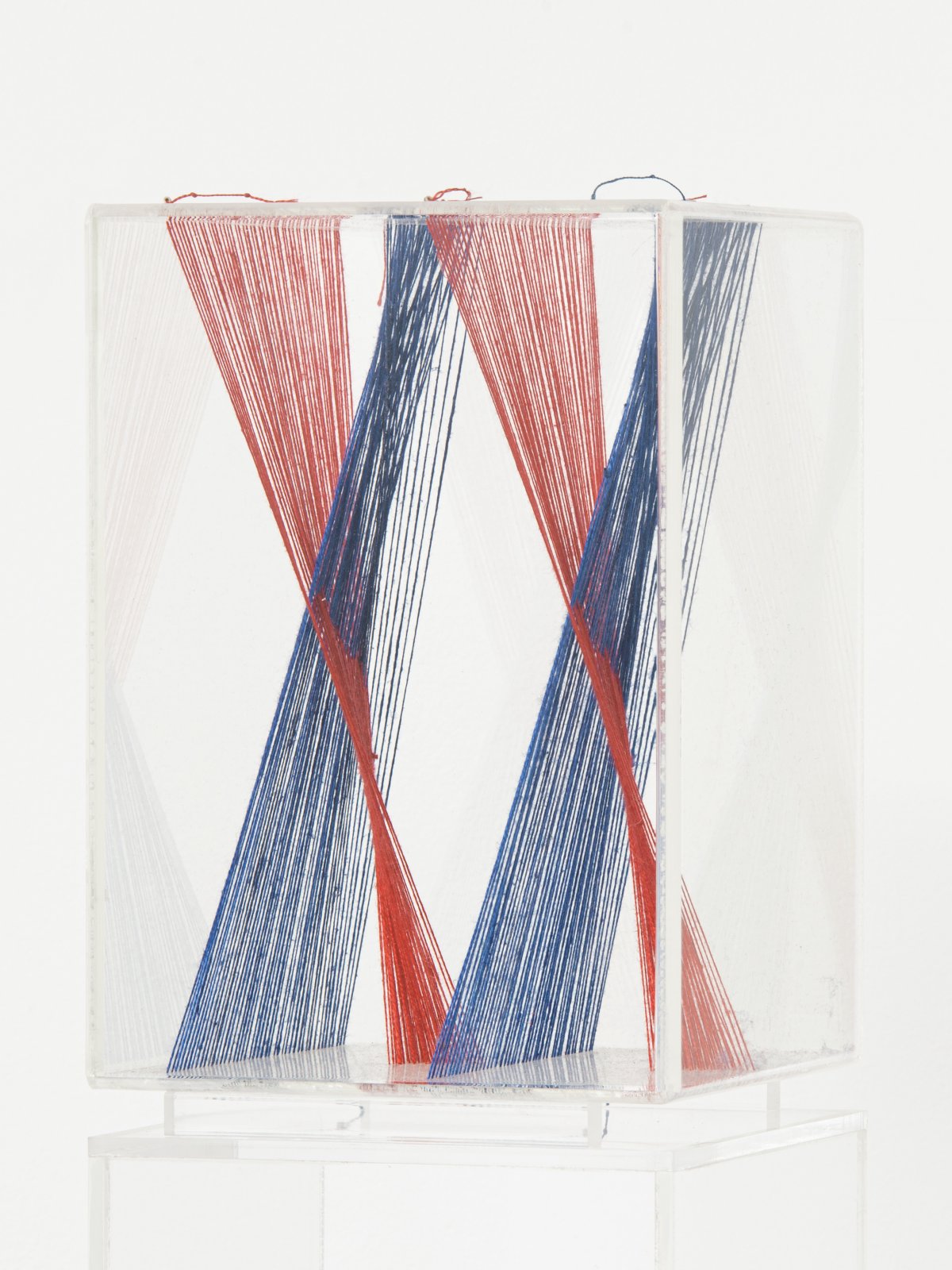 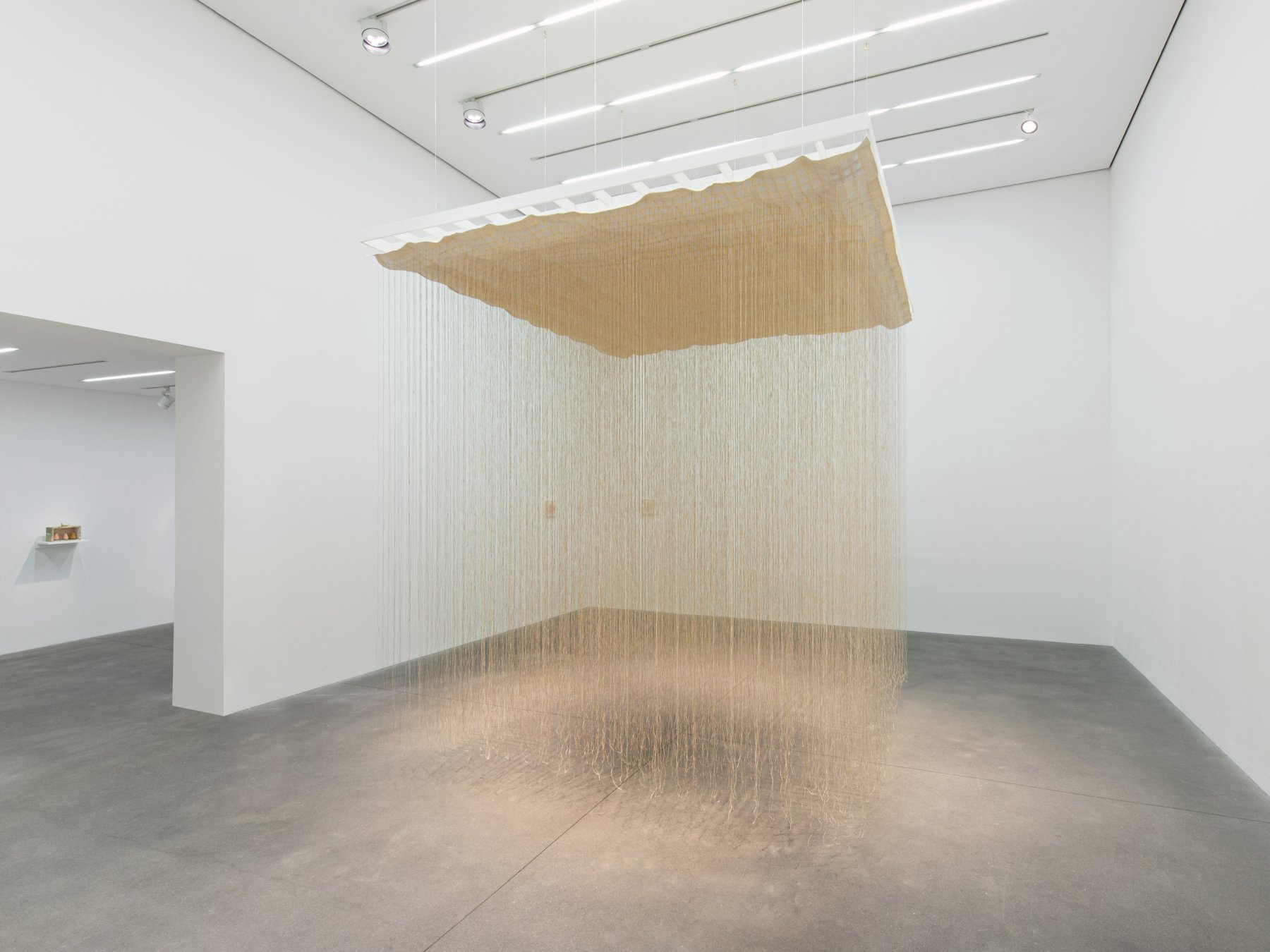 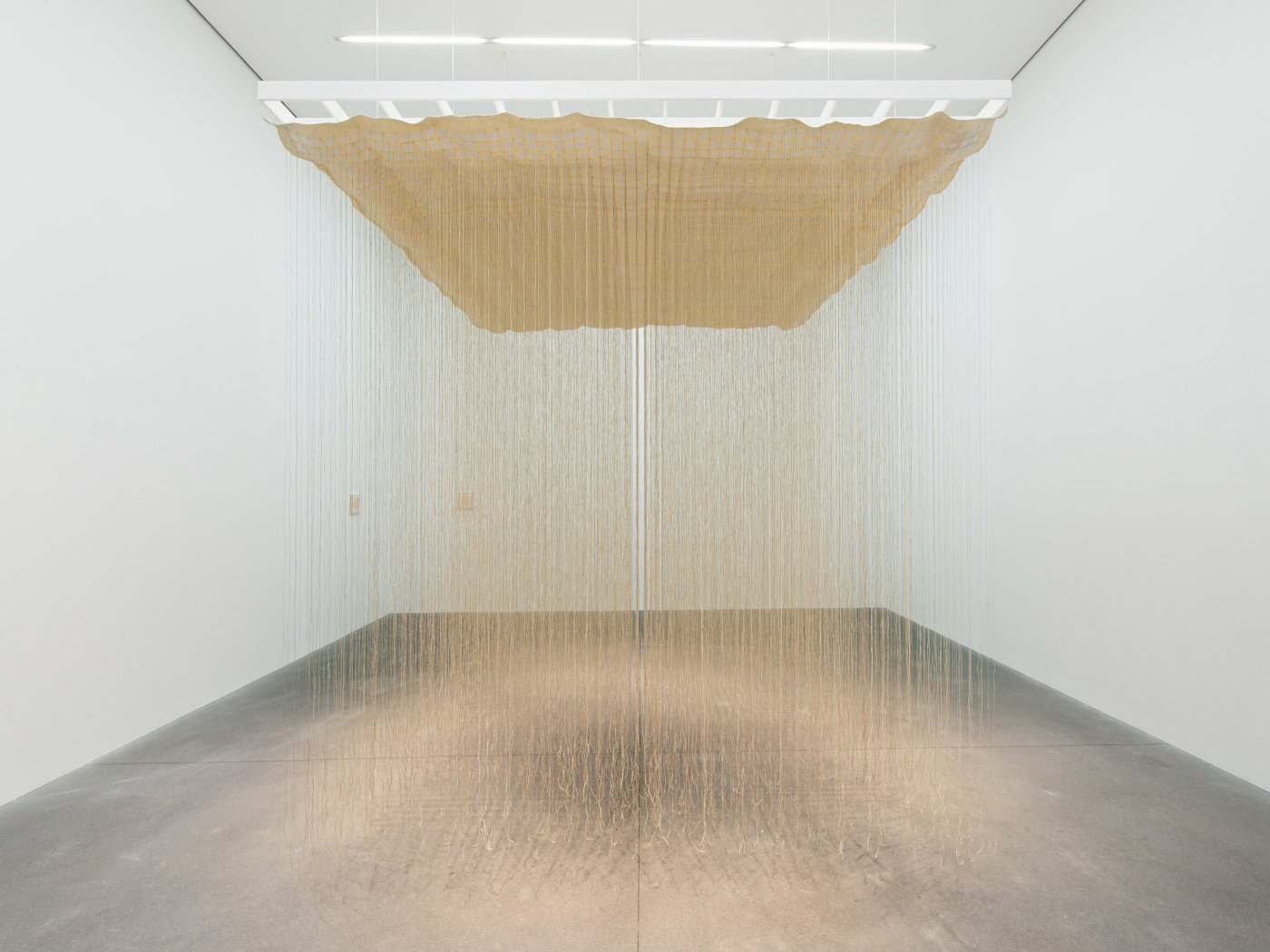 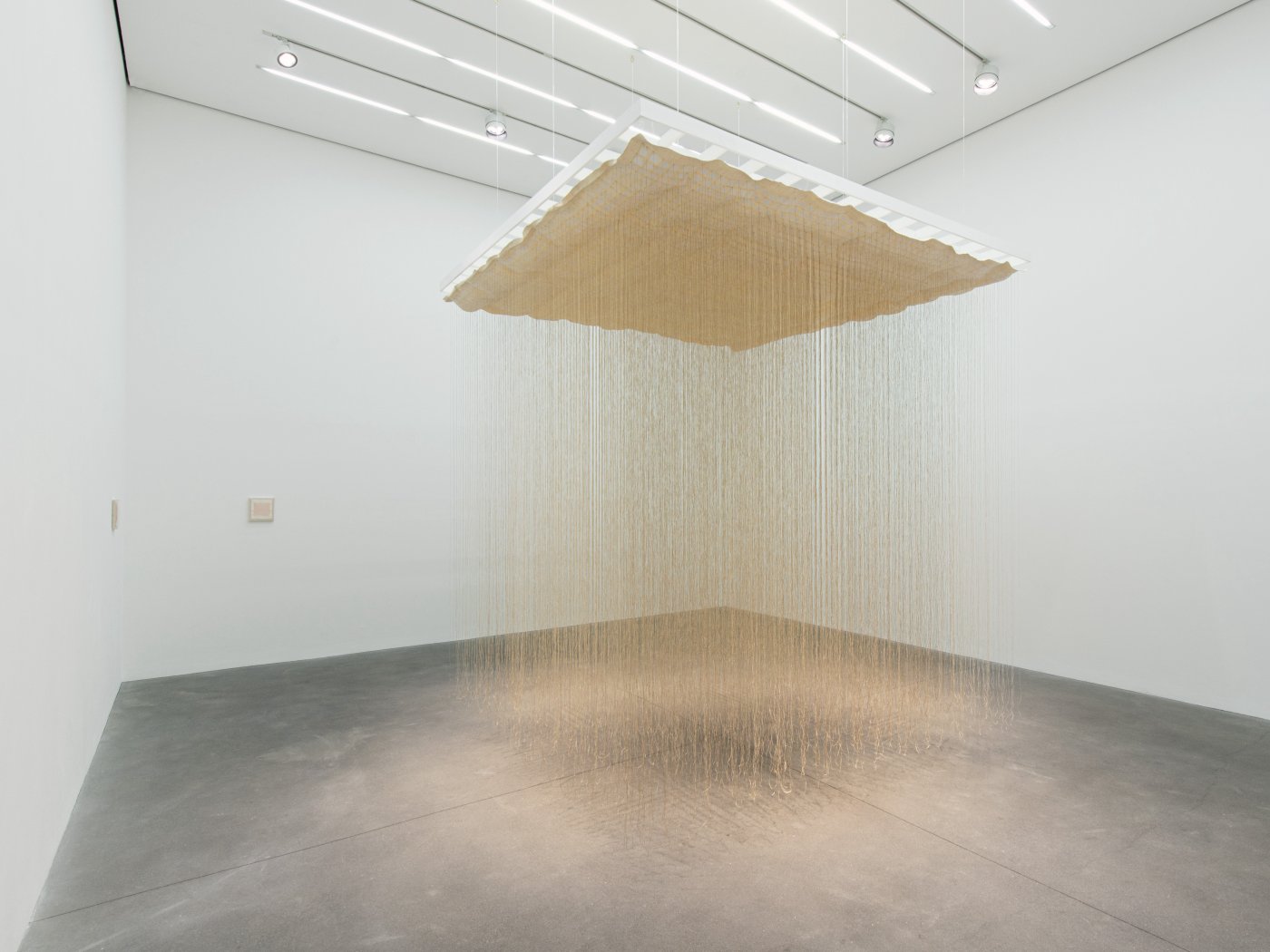 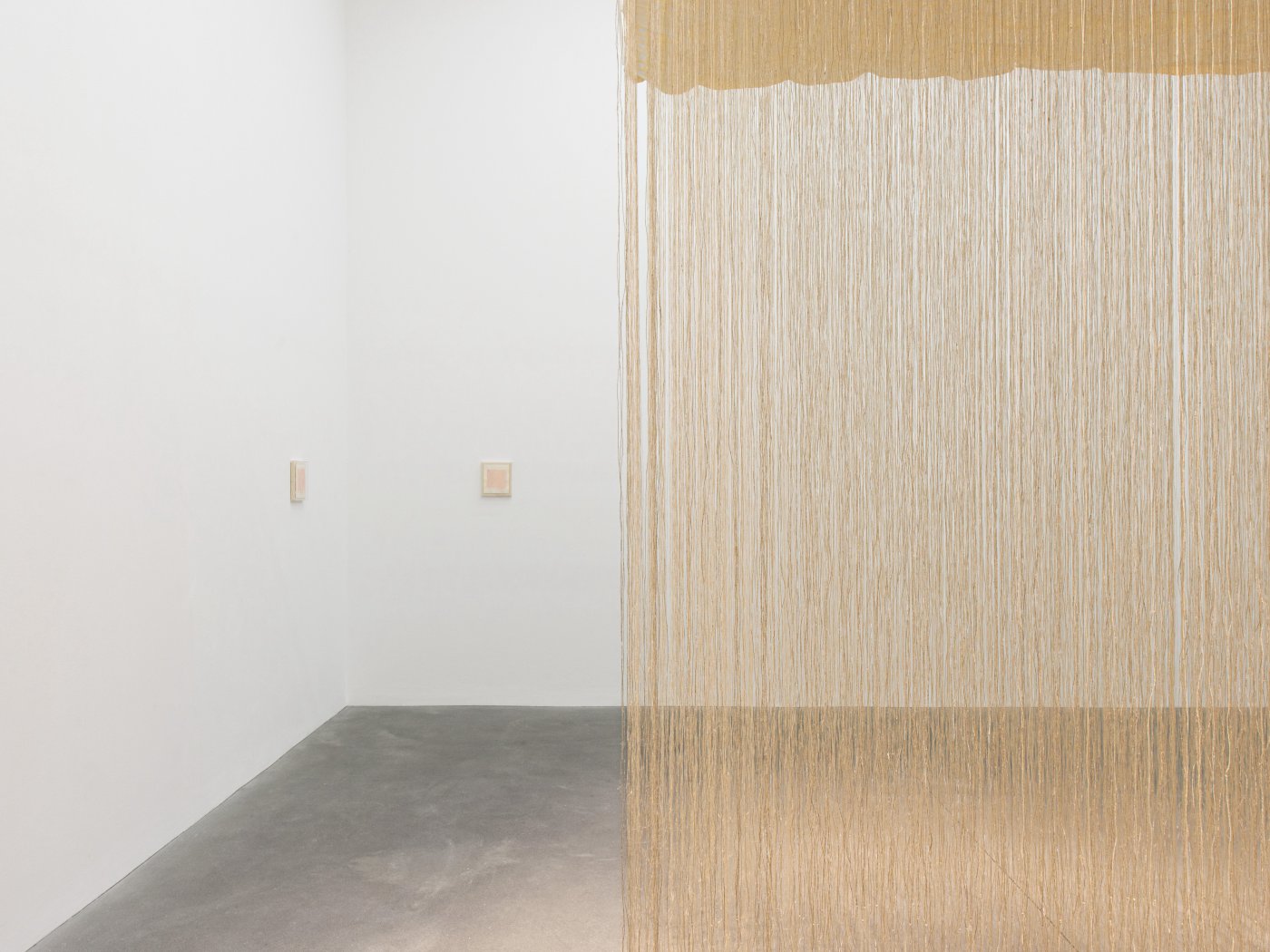 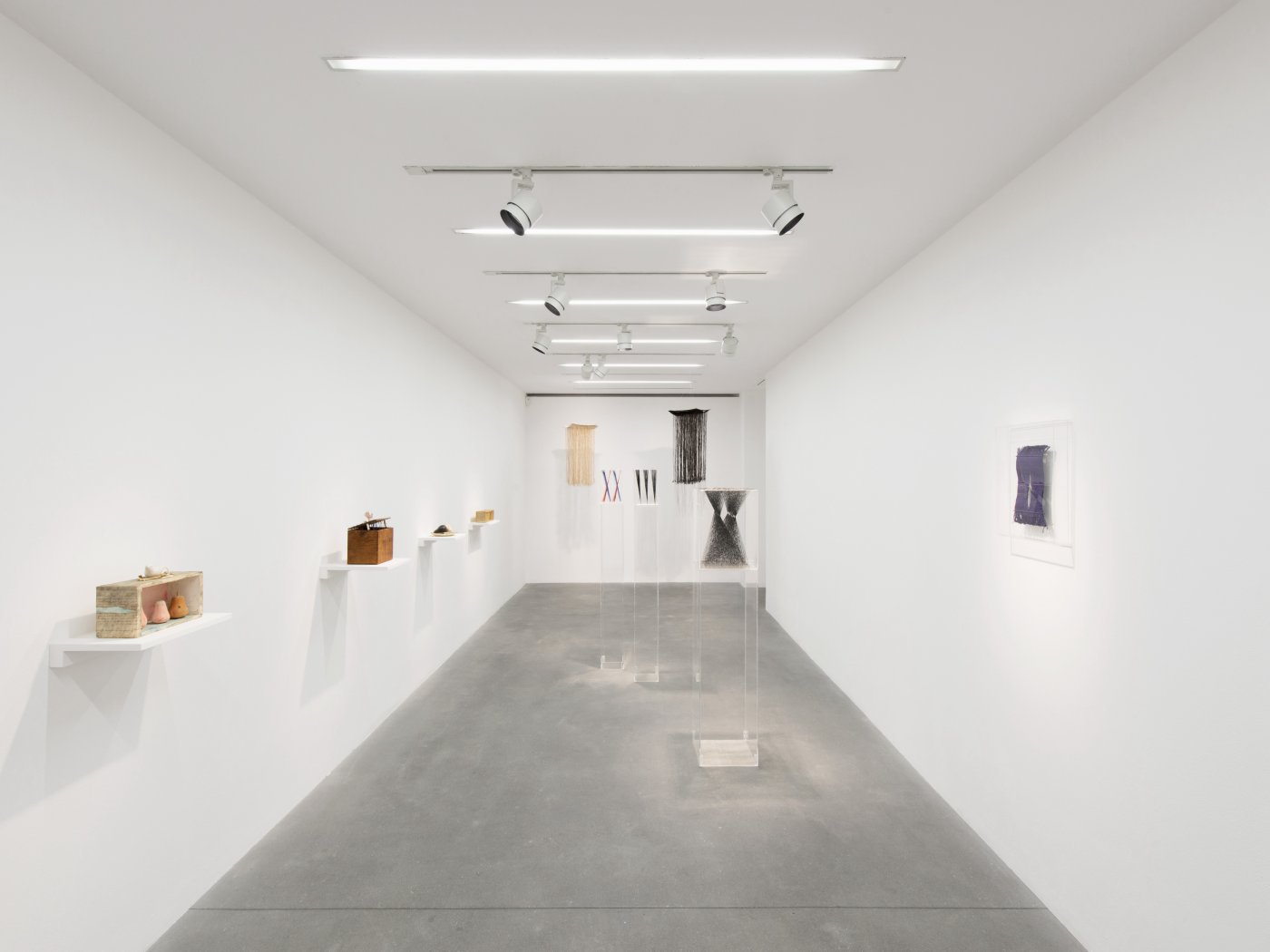 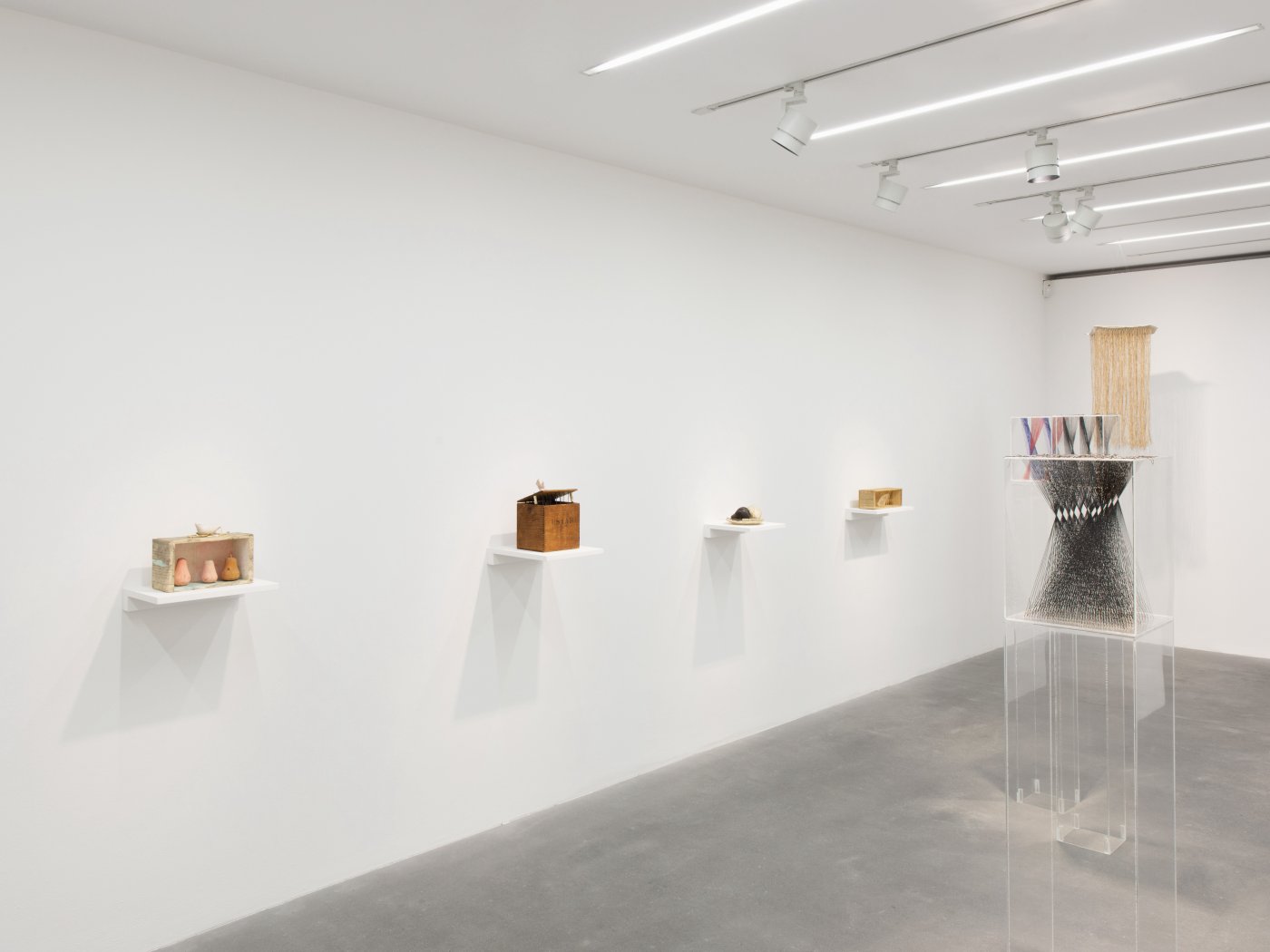 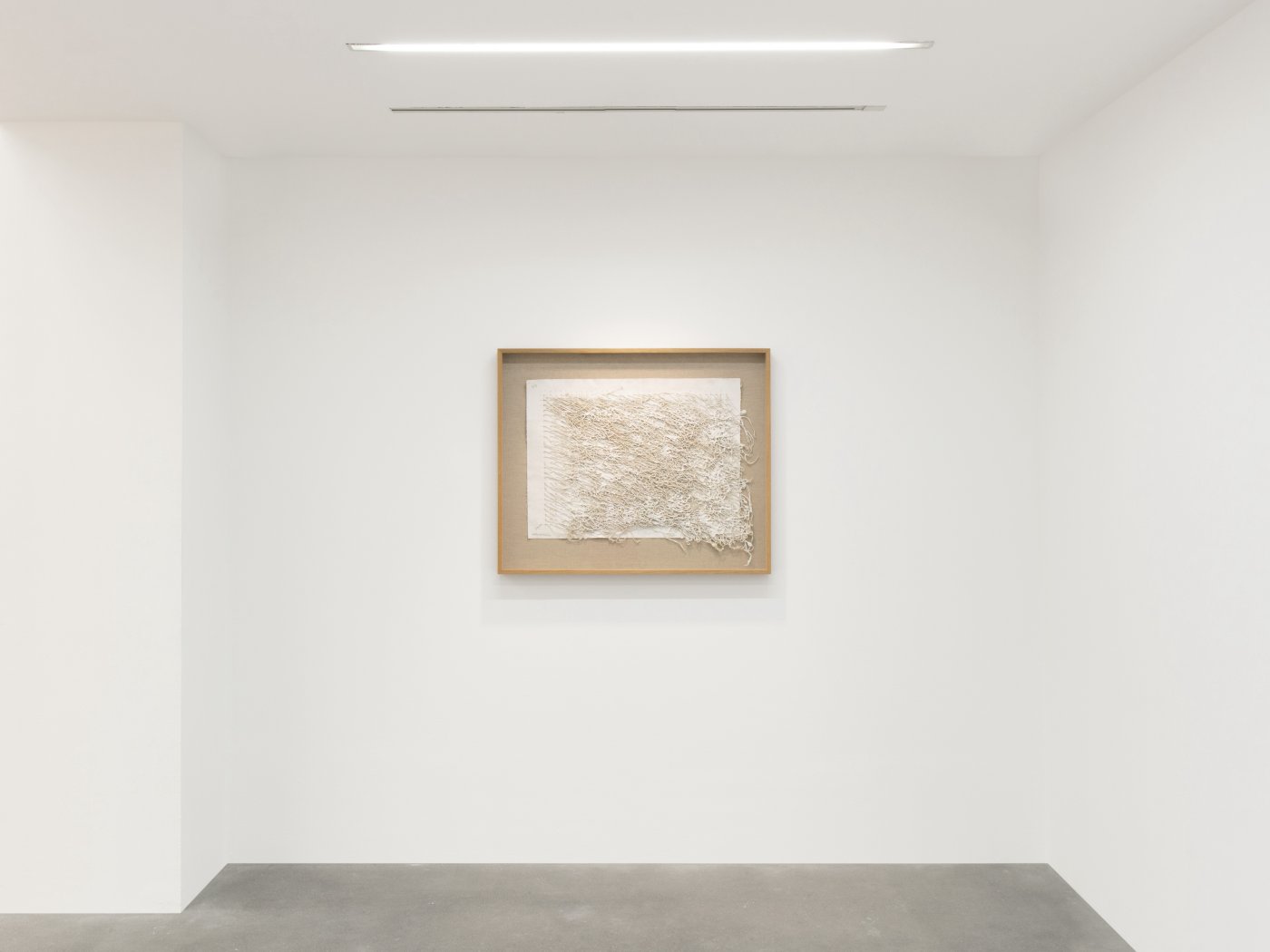 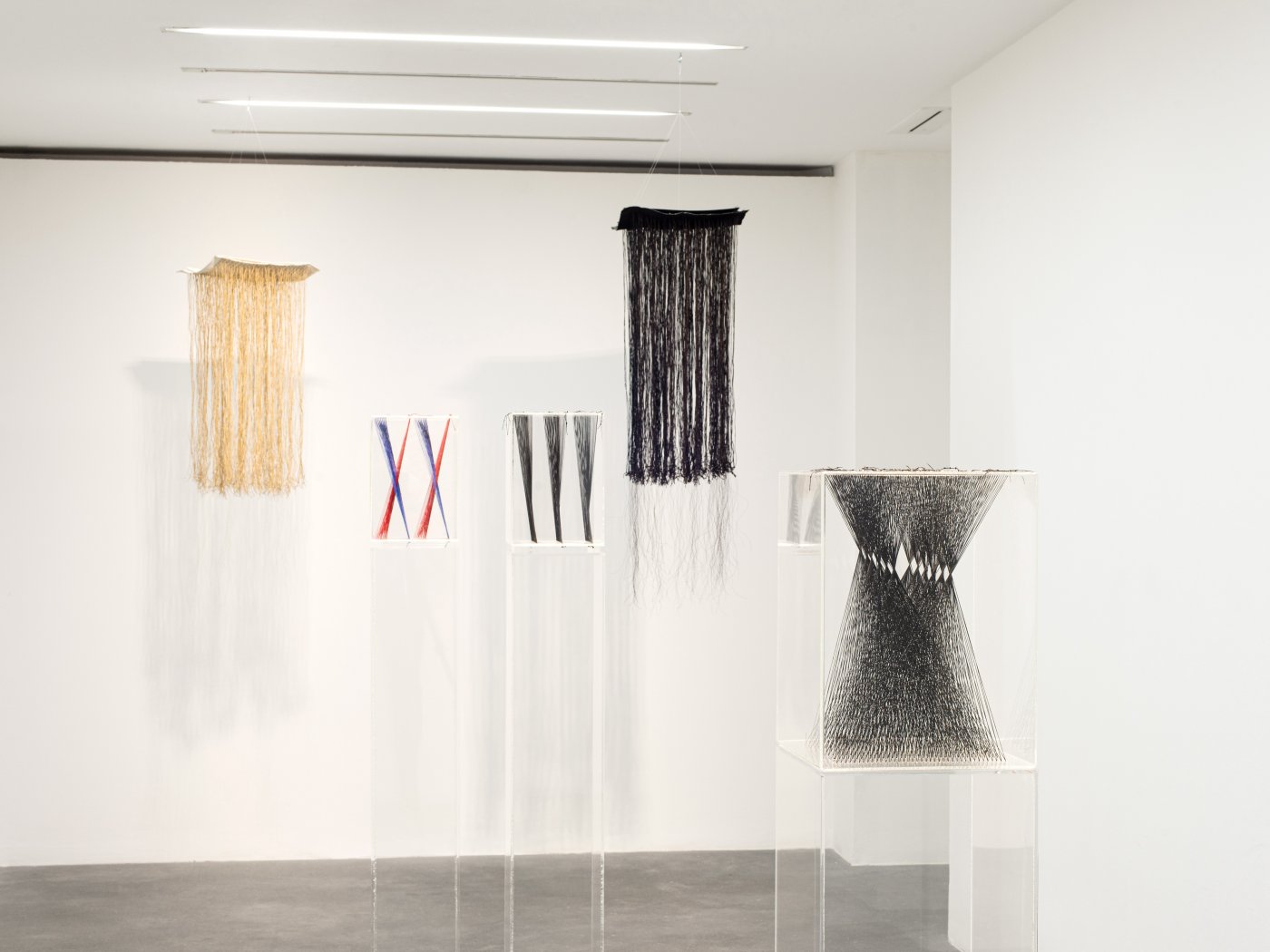 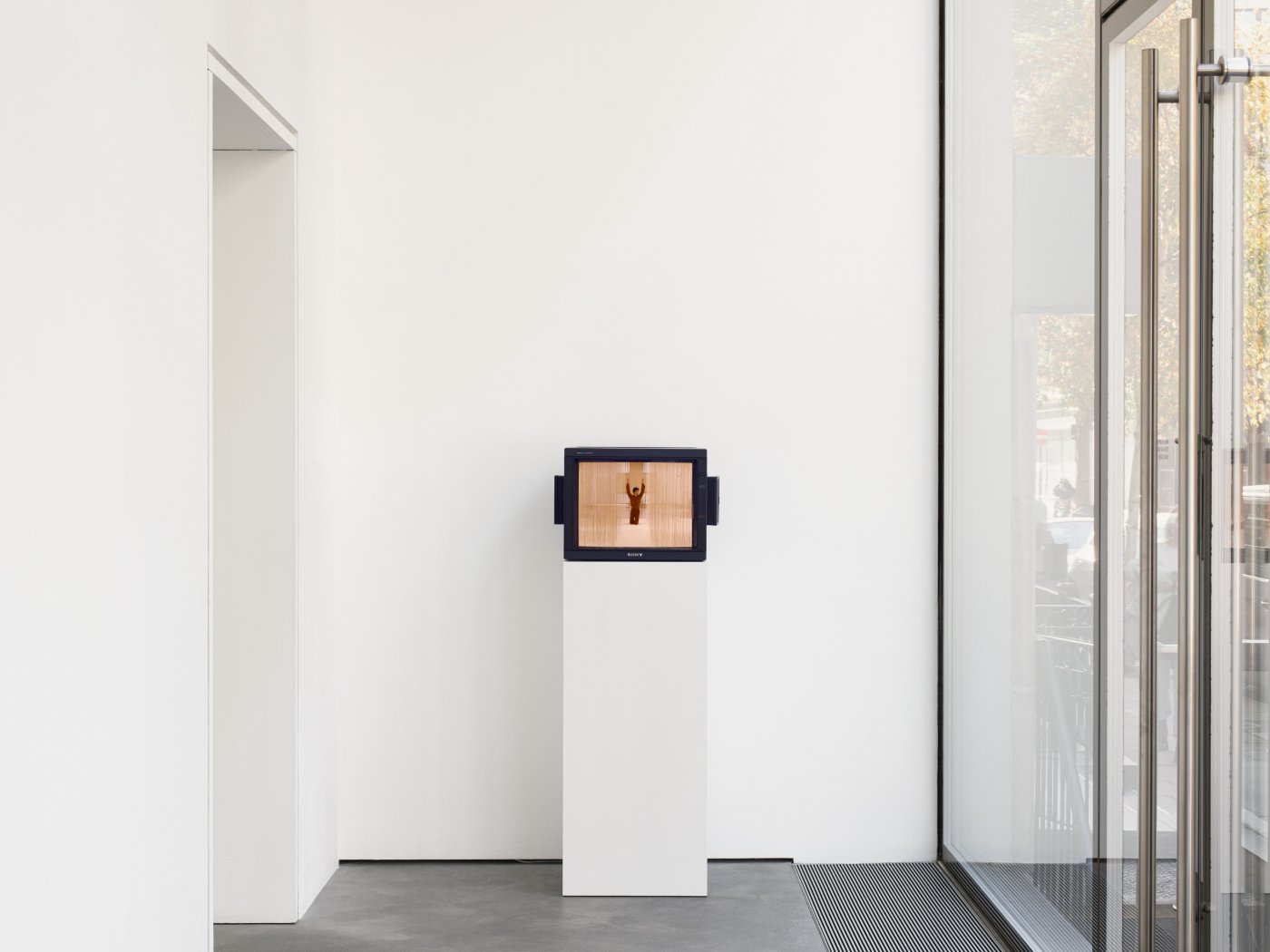 In 1957, Tawney lowered her beloved cat Pansy into her Daimler and drove from Chicago to Manhattan. At the age of 50, she was leaving her home of 30 years in the search of ‘a barer life, closer to reality, without all the things that clutter and fill our lives.’ Tawney may not have earnestly committed herself to her artistic practice until relatively late in life, but this move initiated a total immersion. ‘The truest thing in my life was my work’, she later recalled. ‘I wanted my life to be as true.’

Upon arriving in New York, Tawney settled on Coenties Slip, home to such luminaries as Jasper Johns, Ellsworth Kelly and Agnes Martin, before moving to the nearby South Street, where she leased three floors of a former sailmaker’s loft. It was here, free to experiment at unprecedented scale, that a nascent idea crystallised, one that would define Tawney’s work for the coming half decade. ‘The idea of weaving in volume floated up to consciousness this morning’, she wrote in 1958. ‘I awoke nervous and excited all day thinking about it.’

Tawney was born in Lorain, Ohio, in 1907, and raised on the shore of Lake Erie. She spent her formative years as a proofreader for a legal publisher in Chicago, but the imprint of Ohio lingered. Her work – weaving, collage, mail art – is strewn with birds, feathers, stones; she never shook ‘the blue of the water and the sky.’ Finding equal value in Zen Buddhism and such Western thinkers as Erich Neumann and Carl Jung, Tawney lived as a modern-day pantheist, finding within nature an all-encompassing and immanent spirit.

While it took Tawney 50 years to embrace her work, she had been nurturing it long before. Following the untimely death of her husband George in 1943, she moved to Urbana and studied art at the University of Illinois. In 1946, she enrolled in The New Bauhaus, Chicago, under the tutelage of László Moholy-Nagy, Marli Ehrman, Emerson Woelffer and Alexander Archipenko, and spent the following summer studying at Archipenko’s Woodstock studio, where she created figurative sculptures heavily influenced by modernist trends. (Upon returning to Chicago, she destroyed much of this work.)

Only in 1954, during a fleeting period studying with Martta Taipale at Penland School of Crafts, did Tawney experience her ‘eureka moment’. It was not Taipale’s work that inspired this, but the Finnish weaver’s openness to the phenomenological potential of textile: the way in which thread might mediate between the objective world and subjective experience. With Taipale, Warren Seelig writes: ‘Tawney saw […] not only the potential of woven cloth to be a filter of light but also a natural and organic process’.

In the ensuing years, Tawney’s material negotiations of light, weight and spirit would establish her as a central figure in the fibre art movement of the 1960s. In the mid-1950s, Tawney gained notoriety for her open-warp weavings, which met with acclaim and criticism from an artworld wary of the encroachment of ‘craft’. In the early 1960s, undeterred, Tawney pushed her experimentation further, altering her loom’s reed to startling effect. With a simplicity that belied its daring, this gesture released her warp threads from their structural verticality and introduced to Tawney’s work an idiosyncratic fluidity. These liberated threads were, in the artist’s words, ‘expanding, contracting, aspiring forms – sometimes expanding at the edges while contracting in the center.’

This sensitivity to balance was fundamental to Tawney’s practice – balance of thread, primarily, but also spirit. For Tawney’s was a spiritual art: repetition is meditative, it requires a settled mind. This is exemplified by the ‘Cloud’ series, a key example of which will occupy the main gallery for ‘Lenore Tawney: Part Two’. Tawney embraced this series in 1977, having received a commission from a federal building in Santa Rosa, California. In response to the site’s architecture, Tawney expanded her work into three dimensions, binding over 2,550 descending threads to an elevated plane and creating a translucent cloud that flickered with the breeze. As Sid Sachs writes, these works are ‘less phenomenological matter than meditative presence […] equally of matter and yet of air’.

And just as air is restless, so too are Tawney’s ‘Cloud’ works animated by the environments in which they are hung. In 1979, for an exhibition at the New Jersey State Museum, Trenton, Tawney opened a cruciform passage within the four cubic elements of Four Armed Cloud (1978–79). Having encouraged visitors to walk the path for the duration of the show, Tawney then invited New Wave choreographer Andy de Groat to perform within the negative space – or, as Katharine Kuh termed it, ‘[the] transparent maze of magical power’. The resulting performance initiated a call and response between De Groat and the filaments around him: a synchronised choreography of slow and measured rotation. In that moment, Tawney found a balance that she had pursued for much of her life: between stillness and movement, weight and weightlessness, movement and stasis. Between spirituality and that which is felt.

Rendered in looping cursive on an undated page from Tawney’s journal is an excerpt from Max Beckmann’s On My Painting (1991): ‘I am seeking for the bridge which leads from the visible to the invisible.’ The topic sentence of this paragraph, omitted from the journal, discloses the illuminating possibility of such a coupling, one that Tawney spent half a century pursuing. ‘What I want to show in my work’, Beckmann writes, speaking through or to Tawney, ‘is the idea which hides itself behind so-called reality.’