‘Goddesses’ is the new body of work created during the lockdown, investigating the Divine Feminine, from artist Lena Peters. 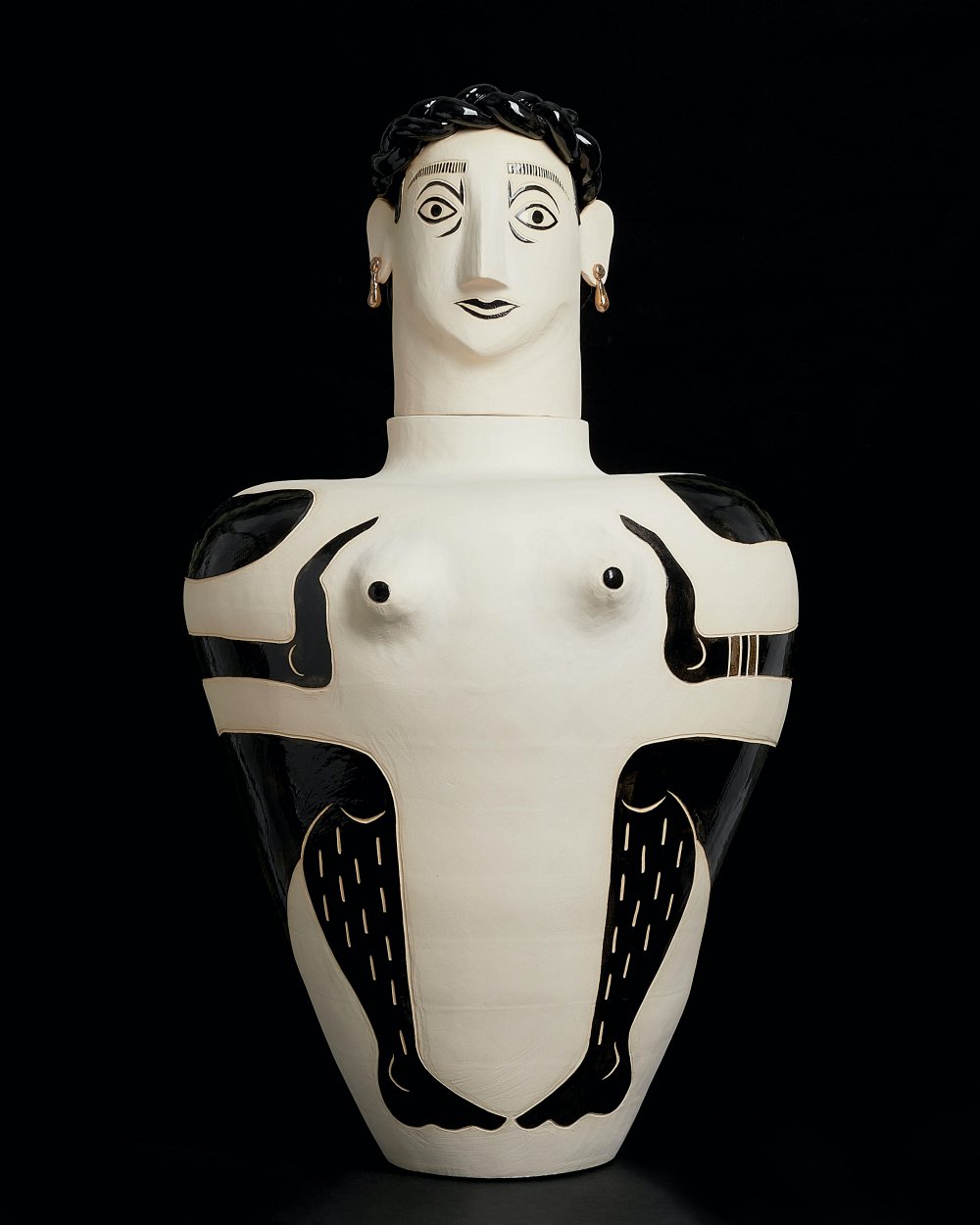 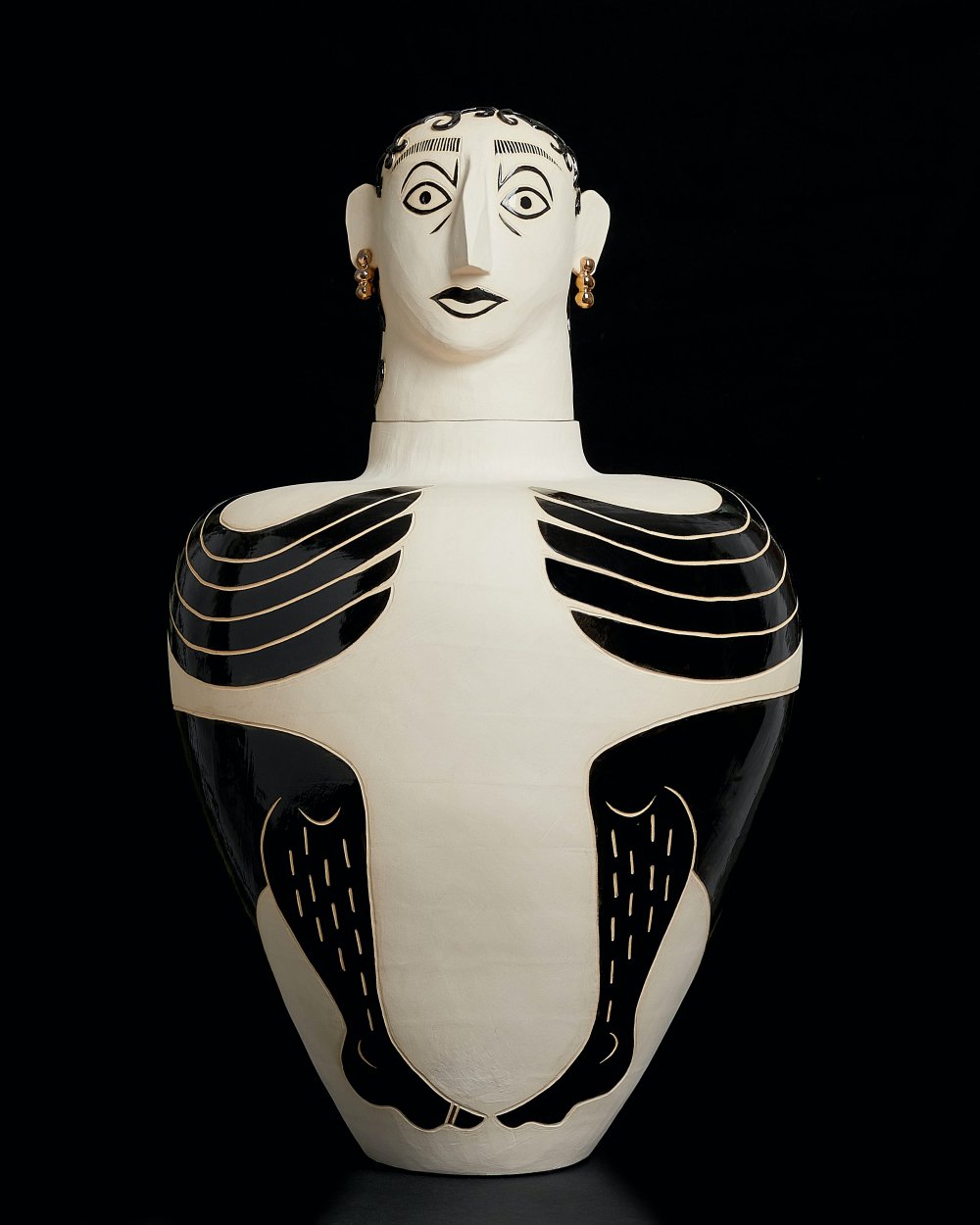 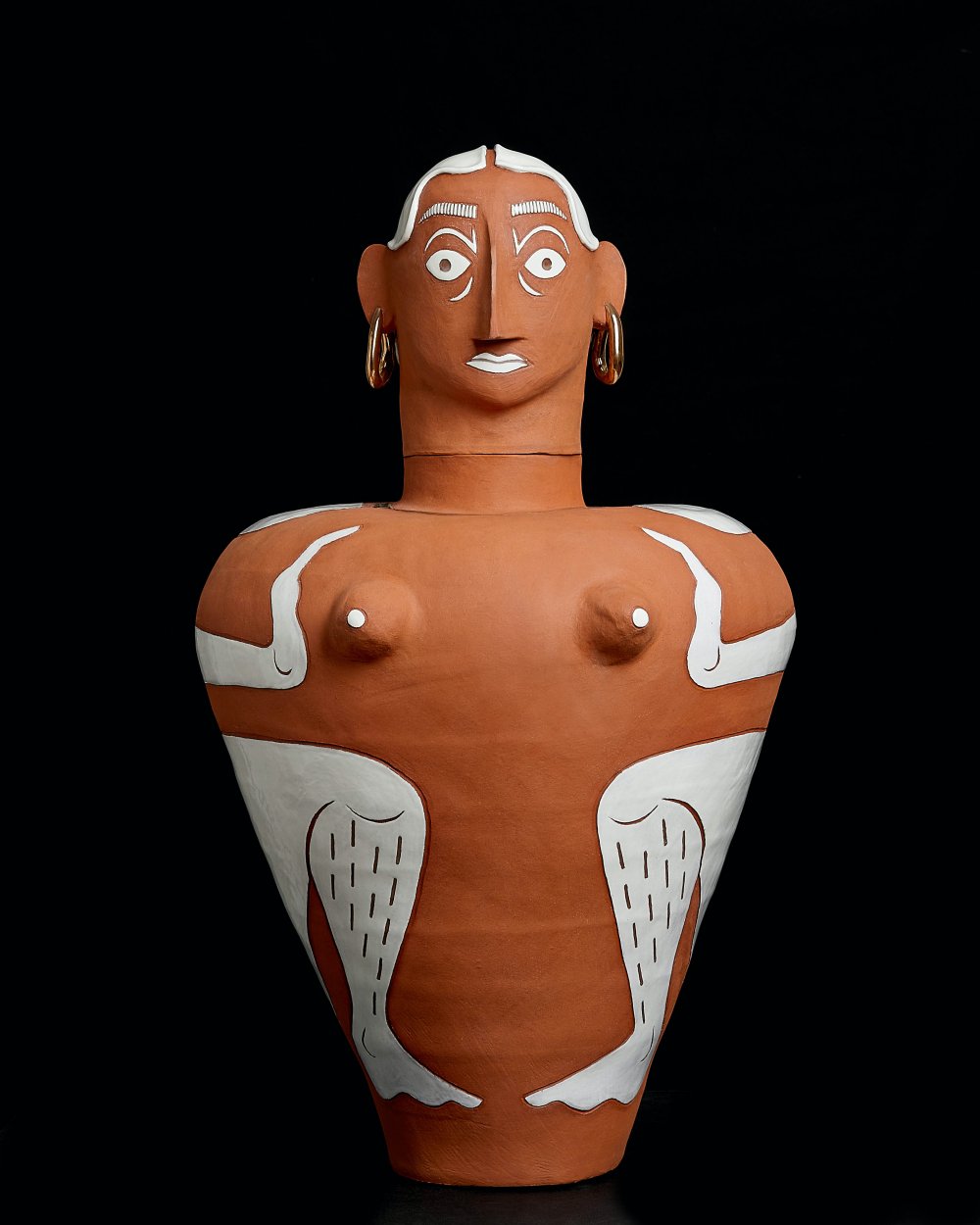 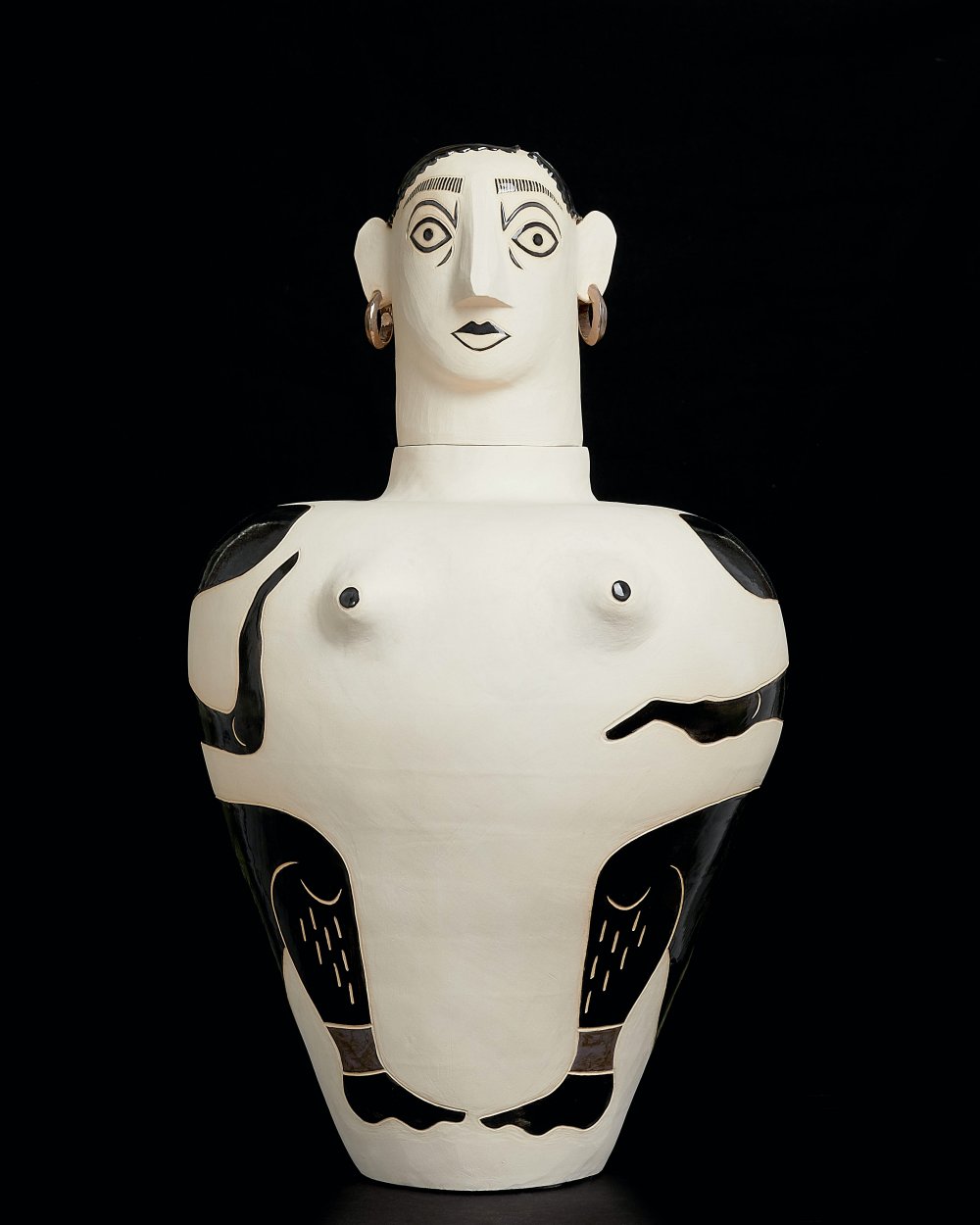 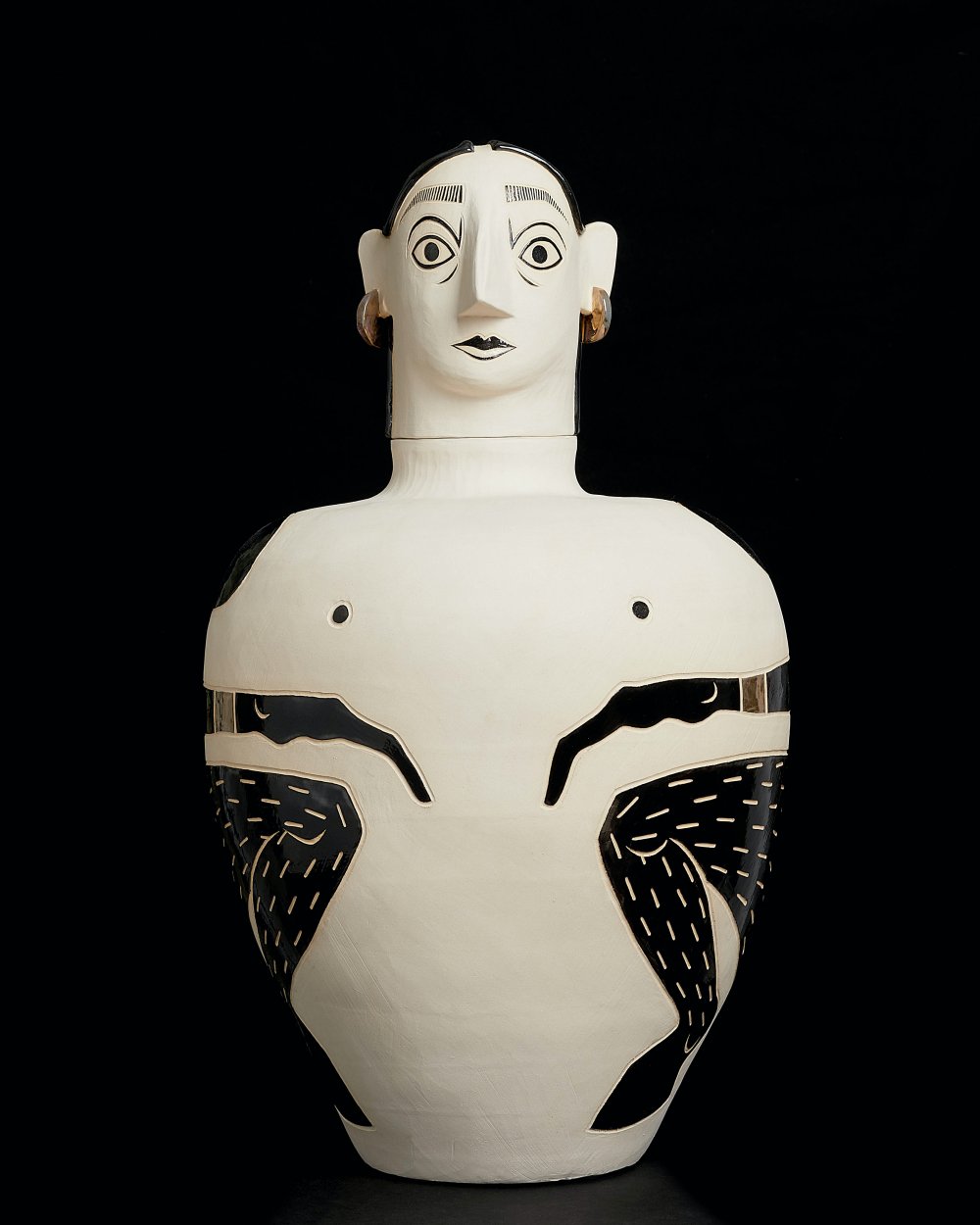 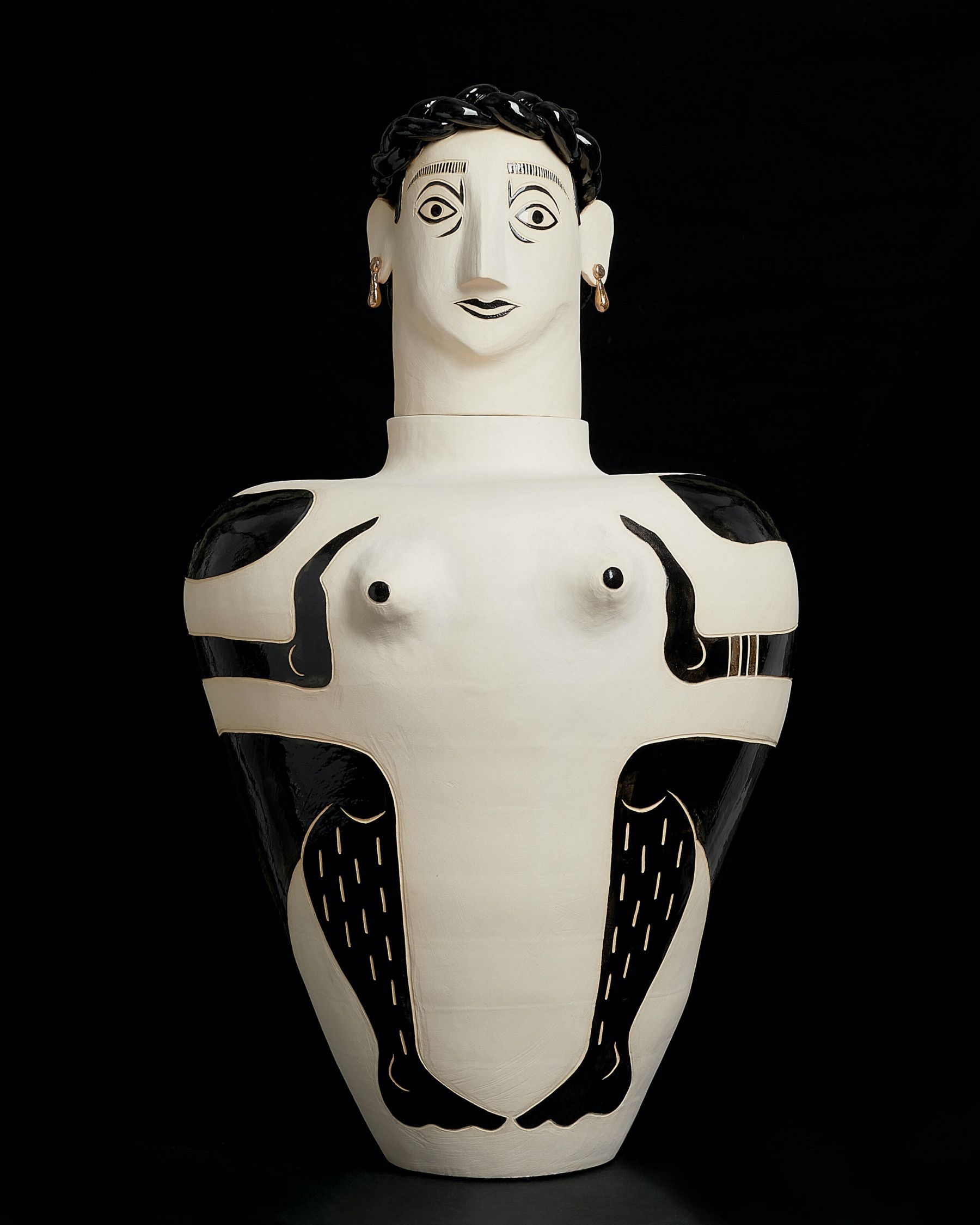 Each of her five pieces, made from Apollo stoneware paper clay and terracotta flax paper clay, has a distinct character but they are very definitely part of a whole. References abound from an artist who has long been fascinated by mythology. The wings on one vessel take their inspiration from Isis, the Egyptian Goddess of the moon, for example, while the cow legs on another piece are derived from another ancient Egyptian figure, Hathor.

Importantly, these large, rounded pieces are lidded vases, drawing on the historical relationship with the female form – something that is surely emphasised by many of the works’ prominent breasts – as well as ceramics’ history of being both functional and non-functional, a vehicle for holding things or for telling stories. The void at the pieces’ heart feels symbolic of fertility, of child birth, and of creation. It’s a potent brew.

Mythology captivated Peters as a child when her parents read bedtime stories of the Greek Gods. As she once explained: ‘They took up residence in my head and never really left.’ It’s a seam she has mined throughout her still-nascent professional career, combining references to ancient cultures with a winning sense of narrative. She graduated from Central Saint Martins in 2017, for instance, with Secrets of the Hidden North. For the collection, she played the role of an archaeologist, who discovered the foundations of a small settlement while rambling in Northumberland National Park, uncovering a hoard of artefacts that combined stories of Romulus and Remus with woodland creatures.

In Saints & Spirits, meanwhile, she spun a yarn about a collection of figures – animal and human, pagan and Christian – that had been uncovered in St Etheldreda’s Church in London’s Holborn. The pieces came with an intricately researched backstory, which suggested they offered the viewer a glimpse into an alternative history, a bastardised form of Christianity, ‘which accepted and absorbed the myriad beliefs and religions across the globe.

There aren’t many contemporary ceramicists who allude to Trojan vases discovered by German archaeological excavator Heinrich Schliemann in 1871 as she does in this latest work. In short, she is a smart, genuinely intriguing and very welcome new voice.

From the artist – Lena Peters

Almost all ancient cultures have at least one goddess myth, and over time the feminine divine has had many names and faces. In Mesopotamia, they called her Inanna; in Ancient Egypt, she was Isis, Hathor or Sekhmet; in Ancient Greece she was Athena and Aphrodite, among others. In the modern day, she is the triple goddess of Wicca; she is Gaia, the earth mother; and she is Lilith, the mother of demons reclaimed from the Old Testament. In Christianity, there are echoes of her in the Virgin Mary, and in the ranks of female saints who are invoked worldwide. These women have carved out a niche and evolved their own cult within the wider monotheistic religion.

This archetype of the feminine divine has roots as far back as paleolithic culture. If we look at ancient art, some of the earliest figurative works are what have been dubbed ‘goddess figures’, with notable examples like the Venus of Willendorf. Her rounded body – curvaceous and undeniably, traditionally feminine – has been the subject of studies and of intrigue since her discovery in 1908. Who does this figure depict? What is her purpose? One theory is that these figures were created by women who looked down at their own bodies and sculpted what they saw – hence their exaggerated shapes, a rarity in a world where the majority of classical art was male dominated. See the myth of Pygmalion, who carved a woman in marble and was so enthralled by his creation that he fell in love with her, convinced that his opus represented the ideal of womanhood.

Because of this varied and far-reaching history, the goddess has always been a powerful symbol for those who wished to harness her. Historically, there have been goddesses of war, of love, of sex, of fertility, of wisdom, who have been invoked from the battlefield to the bedroom. This diverse range of patronages means that the goddess is a versatile symbol; she has been used to promote conflicting ideals, at once appropriated by conservative groups, who wished to promote the idea that a woman’s place was naturally in the home as a mother and then by the feminist movement as a symbol of power and freedom. Her evolution through religion and through popular culture has been all-embracing.

My Goddesses are rounded. Their bodies are vessels, drawing on the long tradition of the vase as representative of the female body. Their form is important, because the vessel has a legacy of being used not just functionally but ceremonially. What they contain – or do not contain – becomes essential to their meaning. These goddesses contain the void; they contain everything and nothing, and so contain potential. This can be seen as the more traditional potential to create life, or the potential to create a multitude of other things; art, music, etc. It is in itself a symbol of divinity, and so the vessel becomes idol.

Their bodies vary. Some have larger, pointed breasts which protrude from the vessel form. Some are flat chested. Some have long hair, and some short, worn in a variety of styles. Their noses vary, as do the positions of their limbs. Some of their limbs are not even human. They wear jewellery, in different places on their bodies, covered in a sheen of valuable gold. This diversity is essential to the nature of these goddesses; they are both a celebration of and a challenge to traditional ideas about how the feminine divine can be represented.

Visually, these goddesses have many references. The animal limbs hark directly back to ancient goddesses; winged Isis, Cow featured Hathor, to name but two. This human/animal hybridity is common in depictions of the divine. Their eyes and hair suggest Etruscan pots and Ancient Greek statues; their forms Mycenean and Cycladic figures; their overall appearance the ‘Athena vases’ discovered by Schliemann at Troy in the late 19th Century, or Moche ceramic pots. These visual traditions help to lend the goddesses a sense of historical weight and help to mark these vases as facets of a single overarching mythology, wearing the faces and bodies of different women.