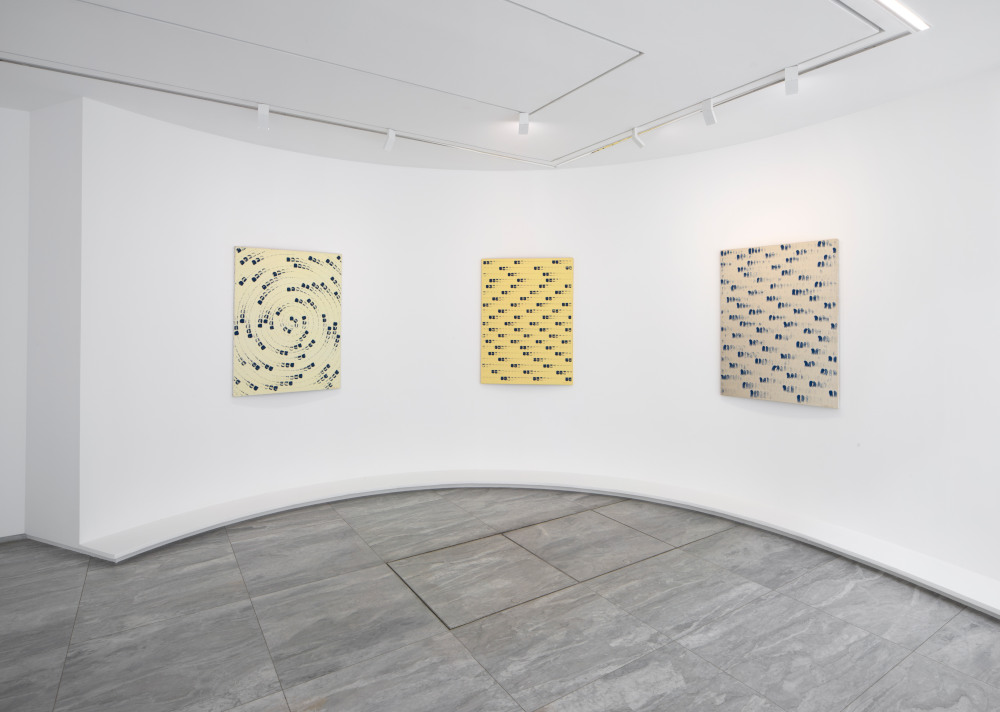 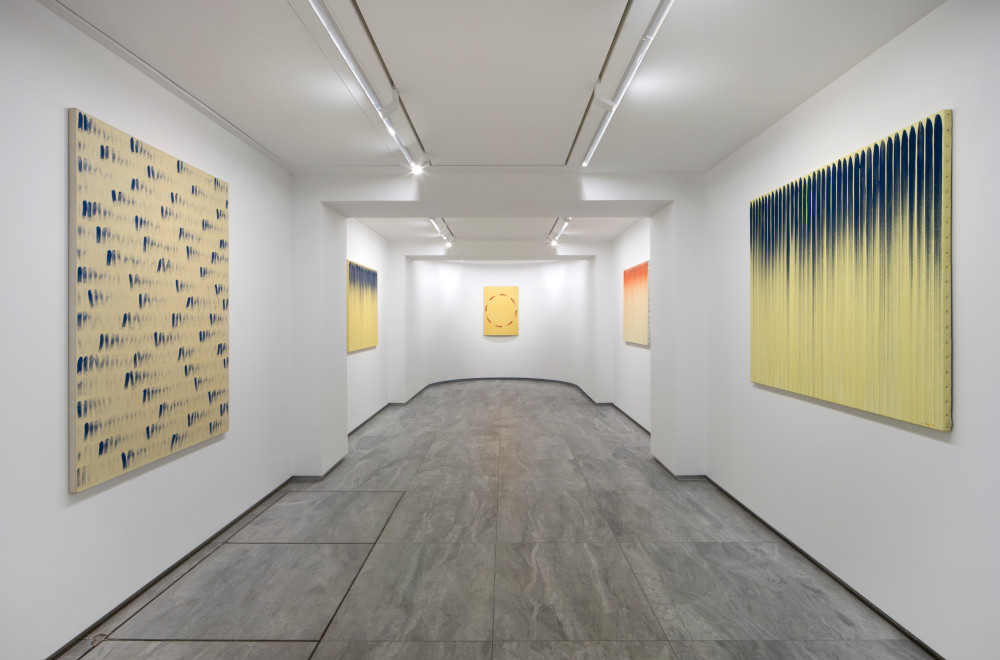 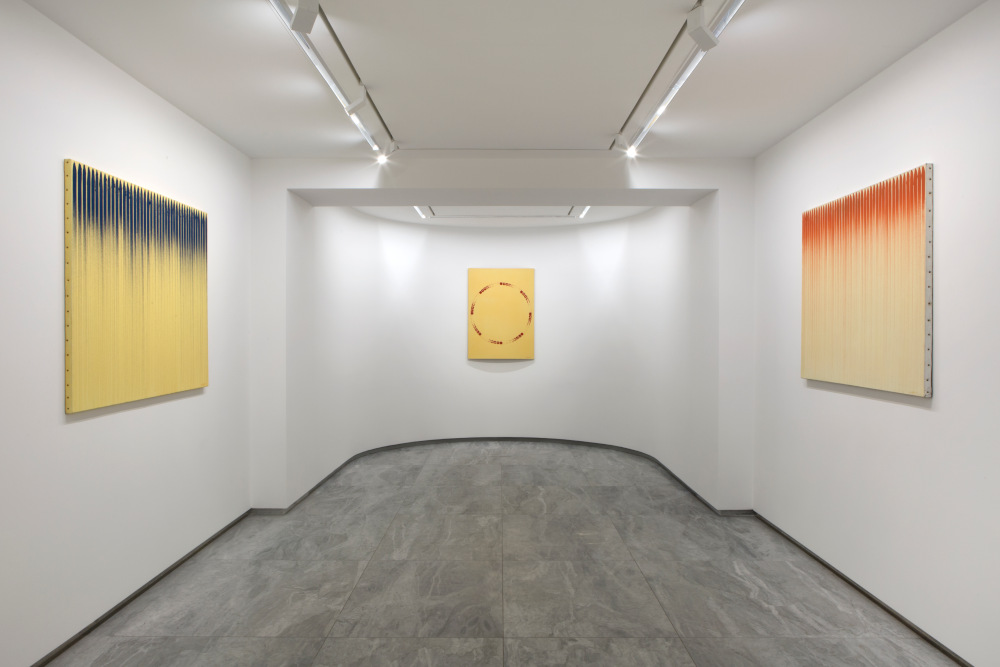 Apparition and existence
What are we looking at? Lines executed in single strokes, slowly extending to the edge of the canvas, like long breaths. Dots, successively repeated until the material on the brush as been exhausted, like notes suffused into silence. Through repetition and difference, the formula appears to lead towards a boundless space and an infinite time. Looking at a work from Lee Ufan’s From Point or From Line series inevitably means imagining a gesture, imagining a brush dipped into a thick mix of mineral pigment, oil, and glue, imagining a hand holding this brush, an arm, a body, imagining the tension in this body’s muscles, imagining the artist’s breath, his concentration, until there is contact between material and canvas, then the moment the wrist is raised. Every stroke of the brush is unique, irreversible, indelible. It marks time. It tries to be a faithful reproduction of the preceding stroke, but, while it resembles it, it is never the same.
The origin of these gestures is to be found in a young Lee Ufan’s apprenticeship in calligraphy in Korea. There is a practice here of telling children to make dots or draw lines on the paper until the ink disappears. In the 1970s and 80s, while he was living between Japan and France, Lee Ufan remembered these gestures from his childhood. It was then that he made these two series of paintings, with which he affirmed his own artistic vision within the context of Mono-Ha, a group of avant-garde Japanese artists the name of which translates literally as ‘the school of things’. Lee Ufan soon became one of the group’s foremost theorists. Their ambition was to reinvest art with a key role through a recourse to simplicity, focusing on the fundamental properties of raw materials and their interactions. They chose to remove themselves from the sphere of representation, the world of images and language, in order to concentrate on sensible experiences. Taking the point and the line as his starting point, Lee Ufan made visible the whole process of the encounter between pure material, blank canvas—still largely visible and intact—, and his body holding the brush. A subtle conflict becomes legible here between reason, aspiring towards the faithful reproduction of the same gesture, and exterior contingency, thanks to which no dot or line will ever be the identical reproduction of the one before.
Time, concentration, and exhaustion of material guide the creation of the work. The place of personal artistic expression is reduced to nothing. The act of painting is no longer that of a heroic ego, instead it is humbly shared with a myriad of parametres, some of which remain uncontrolled: the materiality and the transparency of the paint, the roughness of the canvas, the air in the room, the artist’s form, etc…. Lee Ufan considers each touch of the brush to be unique, alive, appearing then disappearing. Between this beginning and this ending, a negotiation takes place between the canvas, the artist’s body, and the viewer’s attention: this is existence, a fragile balance between fullness and emptiness, sometimes represented by a circle. For Lee Ufan, art is not an end in itself, it is rather a tool, a means for the person who finds herself standing before the canvas to learn to look differently, to become attentive again to the subtleties of the world. With these gestures of point and line, at once extremely simple and richly complex, he invites us to take the time to mentally enjoy, stroke after stroke, the infinite cycle of apparition and existence, until their disappearance.
Jean-Marie Gallais, curator of the exhibition “Lee Ufan. Inhabiting Time”,
Centre Pompidou-Metz

From the VRchives: Lee Ufan: From Point, From Line: 1976 - 1982 @kamelmennour Paris, presented from 3 June to 20 July 2019 For Lee Ufan, art is not an end in itself, it is rather a tool, a means for the person who finds herself standing before the canvas to learn to look differently, to become attentive again to the subtleties of the world - Jean-Marie Gallais click the link in our bio to view the exhibition in VR #360 #360art #360photo #VR #VirtualReality #LeeUfan #kamelmennour #Paris #gallery #exhibition #art #painting #abstract #geometry #koreanart #contemporaryart #modernart #seemoreart #GalleriesNow #ArtPassport #lifestyle #ID15788