Maureen Paley presents the second solo exhibition at the gallery by Lawrence Abu Hamdan. The exhibition includes a newly realised installation of the video work Once Removed (2019) which was first shown in Sharjah Biennial 14, UAE (2019)(commissioned by Sharjah Art Foundation) and was also included in the Biennale of Sydney, Australia earlier this year. 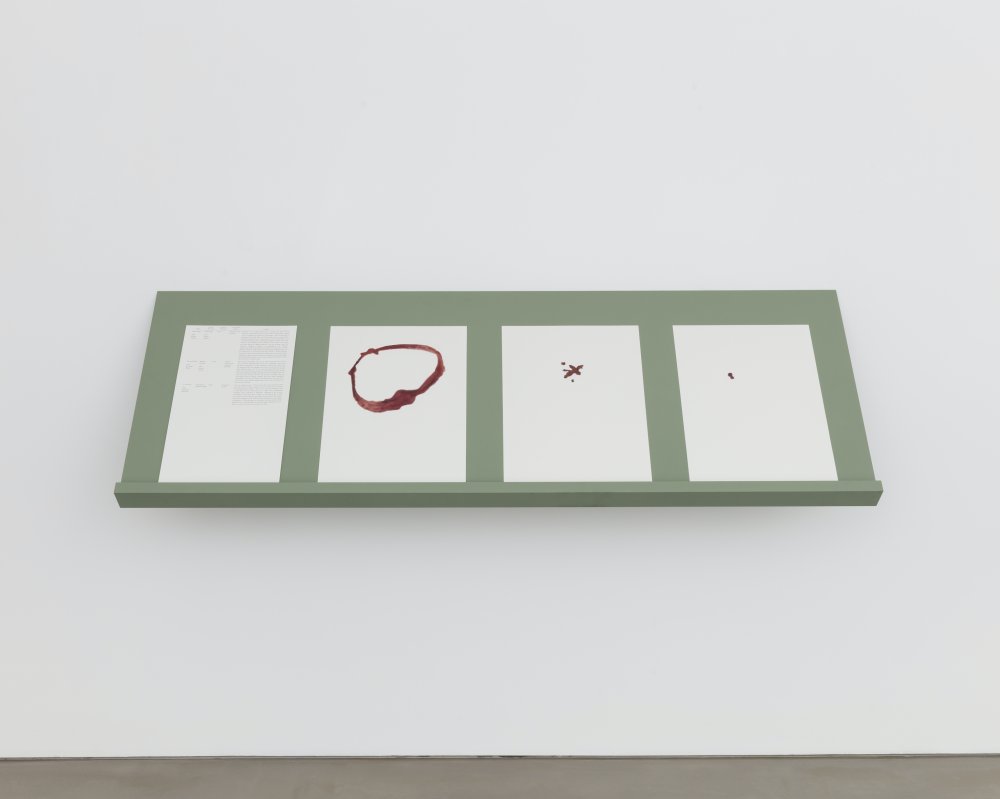 Lawrence Abu Hamdan
For the Otherwise Unaccounted (shelf a), 2020 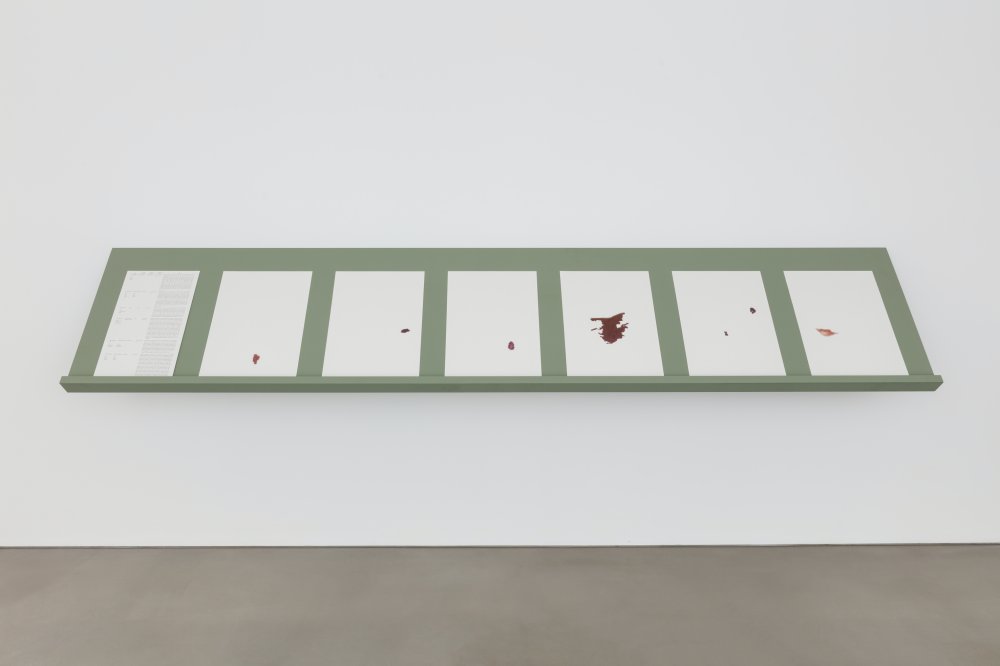 Lawrence Abu Hamdan
For the Otherwise Unaccounted (shelf b), 2020 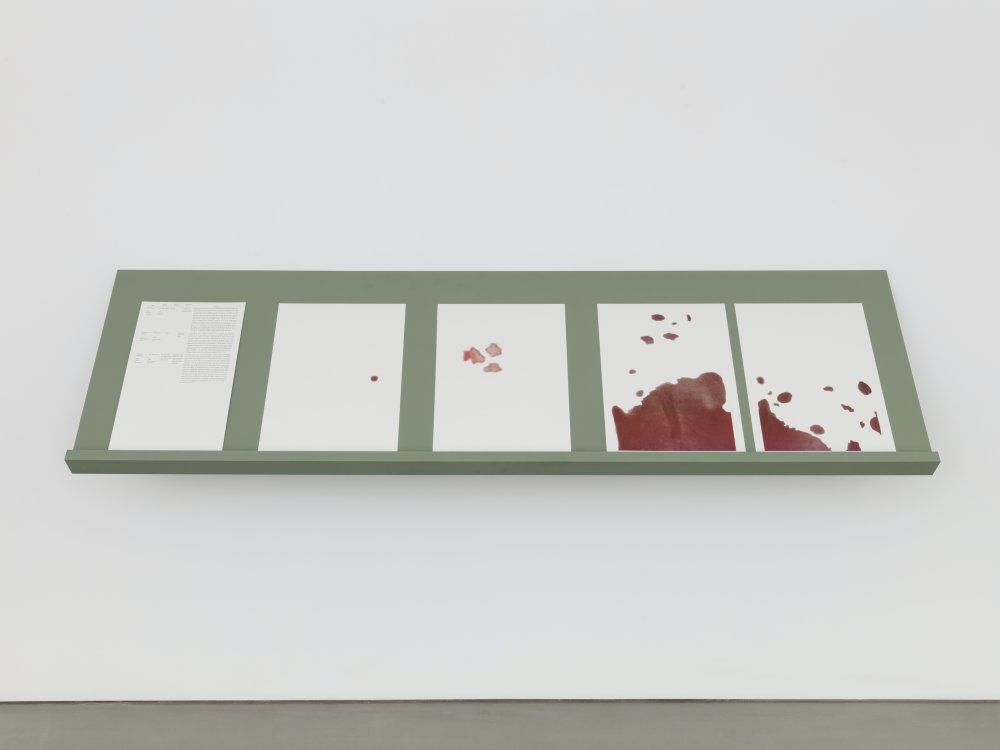 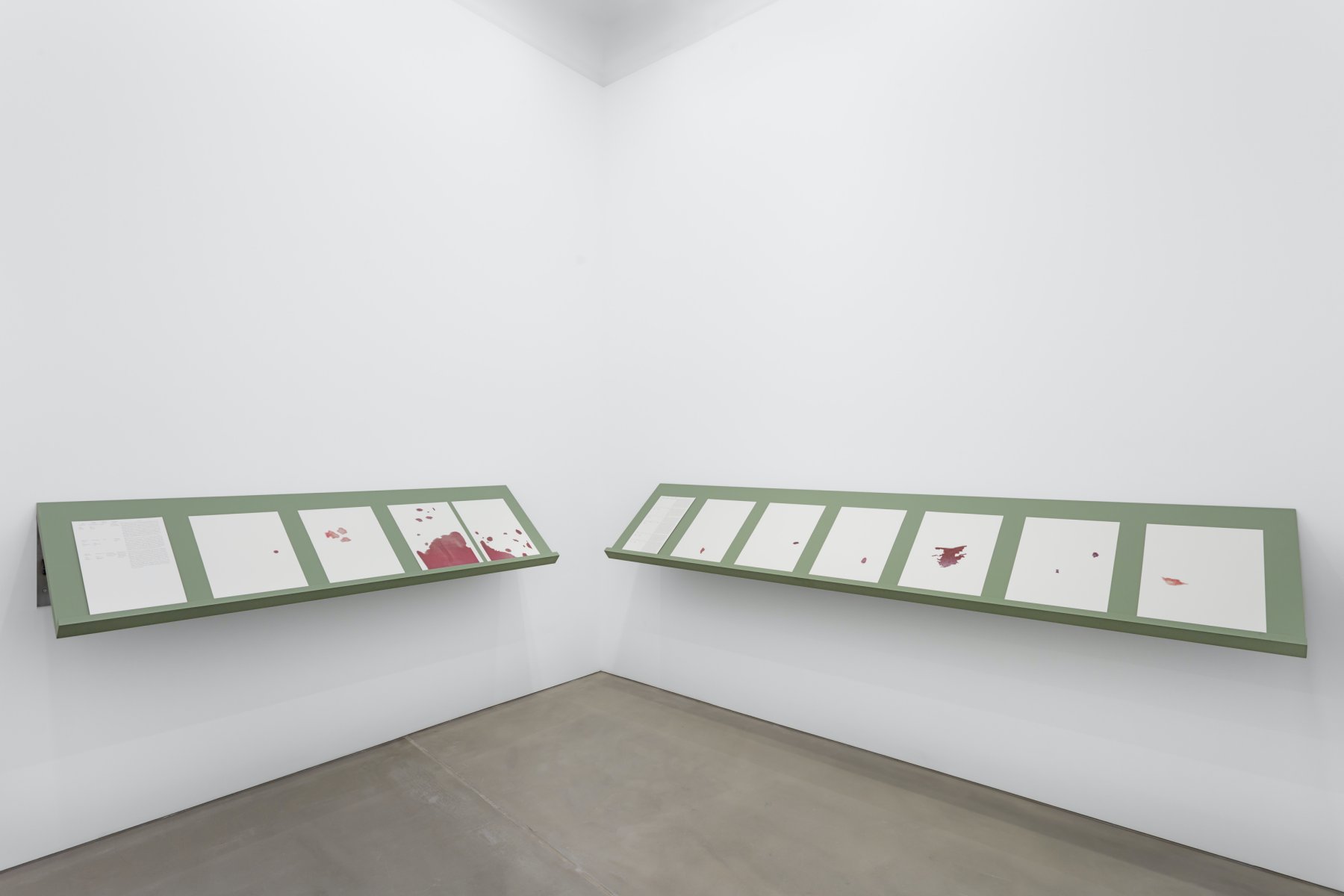 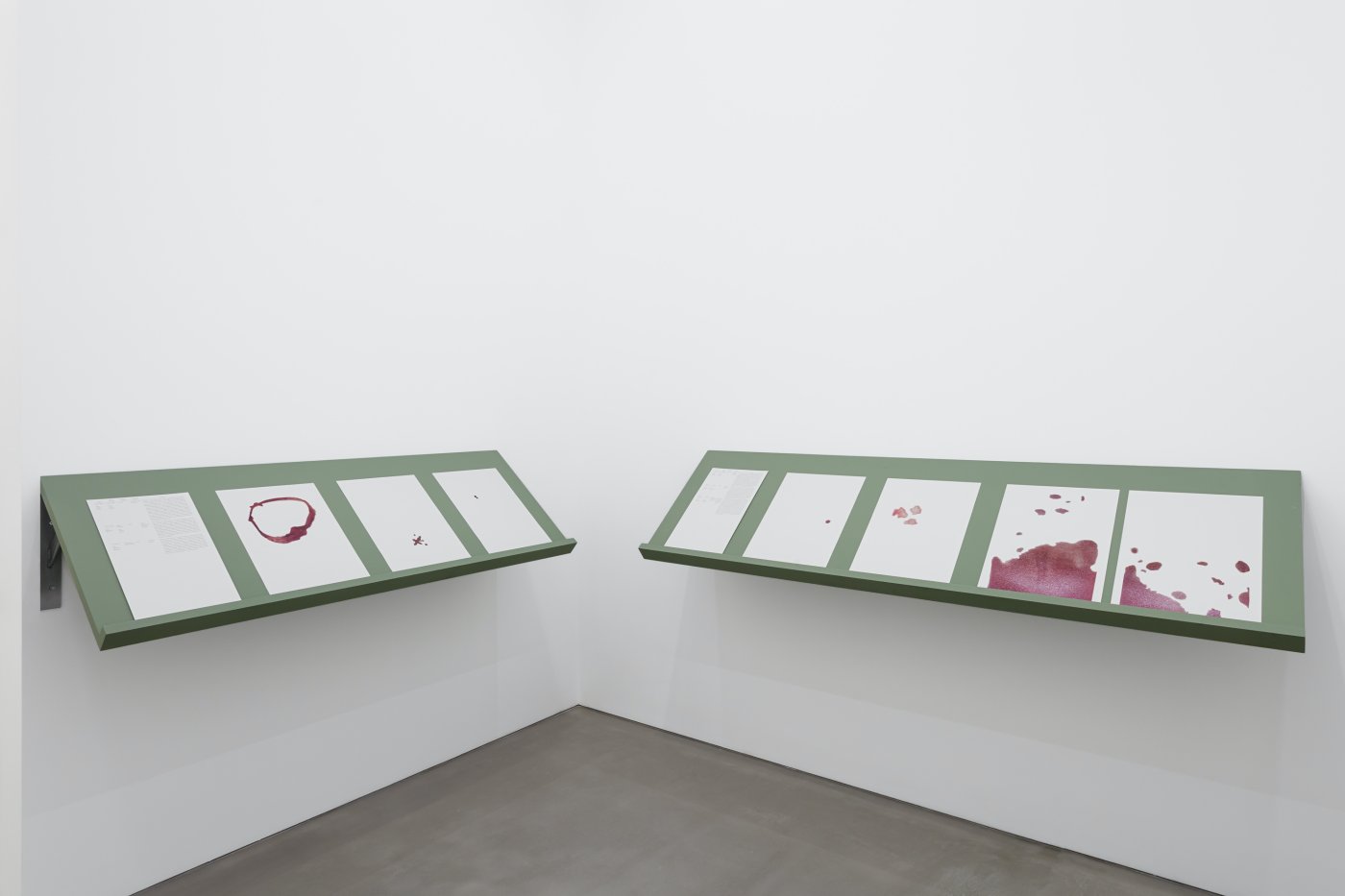 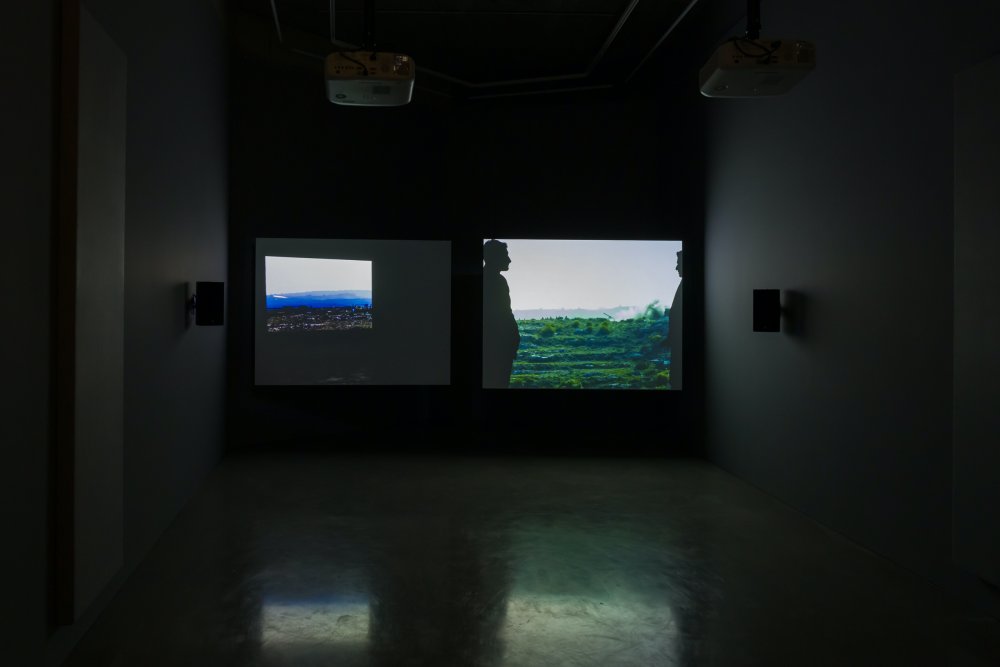 This is the first time it is shown in the UK. As well, the gallery presents pieces from his most recent project, For the Otherwise Unaccounted (2020) that consists of a series of thermographic prints which investigate the idea of birthmarks corresponding to reincarnation. This exhibition presents the first iterations of a new body of work he is developing that investigates reincarnation, not as a scientific fact, but as a medium for justice.

This dual-channel video installation is a portrait of Bassel Abi Chahine, a 31-year-old writer and historian who has managed to obtain the most comprehensive inventory of extremely rare objects, photographs and interviews of the People Liberation Army (PLA) and Progressive Socialist Party (PSP) militia from the Lebanese civil war. His obsessive analysis, collection and unprecedented research into this one militia was done in pursuit of material to reconstitute flashbacks and unexplainable memories from a previous life. Through his research, Abi Chahine realised that his own lucid memories of a war he had not lived were because he was the reincarnation of a soldier Yousef Fouad Al Jawhary, who died aged 16 on February 26, 1984, in the town of Aley. The scenography of the film attempts to establish the conditions to listen to a new category of witness, one that is yet to be accepted into the production of history.

In 1997 the psychiatrist and professor at Virginia School of Medicine, Dr Ian Stevenson published his life work, “REINCARNATION AND BIOLOGY: The Etiology of Birthmarks”. The book was the result of fieldwork in Asia, Turkey, Lebanon, across Africa and Alaska, in which he interviewed and investigated claims of reincarnation with particular attention to the correspondence of birthmarks on the reincarnated subject to the circumstances of their death in their previous lives. Stevenson’s book is a strange and beautiful mix of narrative literature, forensic analysis, biological data, historiography, theology and conflicting scientific hypotheses. In focusing on the claim to reincarnation rather than the ethnography of a single people, Stevenson’s monologue chronicles a collectivity of people who exist at the threshold of the law and for whom injustices and violence have otherwise escaped the historical record due to colonial subjugation, corruption, rural lawlessness and legal amnesty. The raised ink renderings of these birthmarks highlight the ways in which testimony is stored in the body. This work isolates the birthmarks from their bodies, and in this way archives the only surviving remnants of historical erasure, such as forced religious conversions, destruction of language and property, colonial occupation and territorial annexation.

Lawrence Abu Hamdan has a committed interest in sound and its intersection with politics. This originates from his background as a touring musician and his earlier work in DIY music production. His more recent audio investigations have been used (along with informing his art) as evidence at the UK Asylum and Immigration Tribunal and as advocacy for organisations such as Amnesty International and Defence for Children International together with fellow researchers from Forensic Architecture.

He completed his PhD at Goldsmiths, University of London in 2017 and is currently a fellow at the Gray Centre for Arts and Inquiry at the University of Chicago. In 2019, he formed a collective with fellow Turner Prize nominees Helen Cammock, Oscar Murillo and Tai Shani in order to be jointly granted this award. This is the first time such a gesture has occurred. His solo exhibition at Vienna Secession will open in November this year.

A solo publication [Inaudible] – A Politics of Listening in 4 Acts was co-published by Portikus, Kunst Halle Sankt Gallen and Sternberg Press in 2016. Lawrence Abu Hamdan: The Voice Before the Law was published in 2019 on the occasion of his exhibition at Hamburger Bahnhof – Museum für Gegenwart – Berlin. This year, the Jameel Arts Centre produced the publication Artist’s Rooms: Lawrence Abu Hamdan to accompany his solo exhibition.