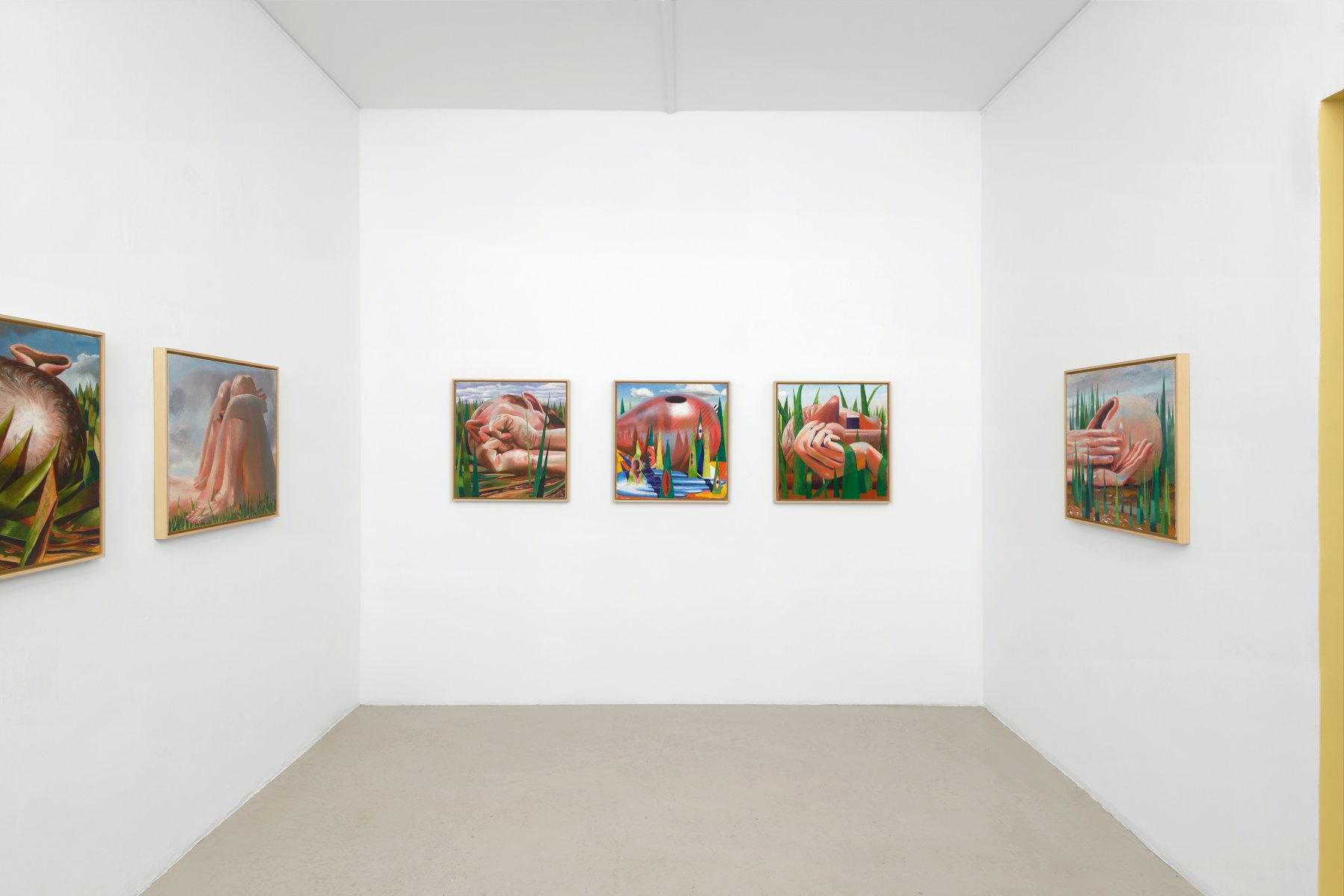 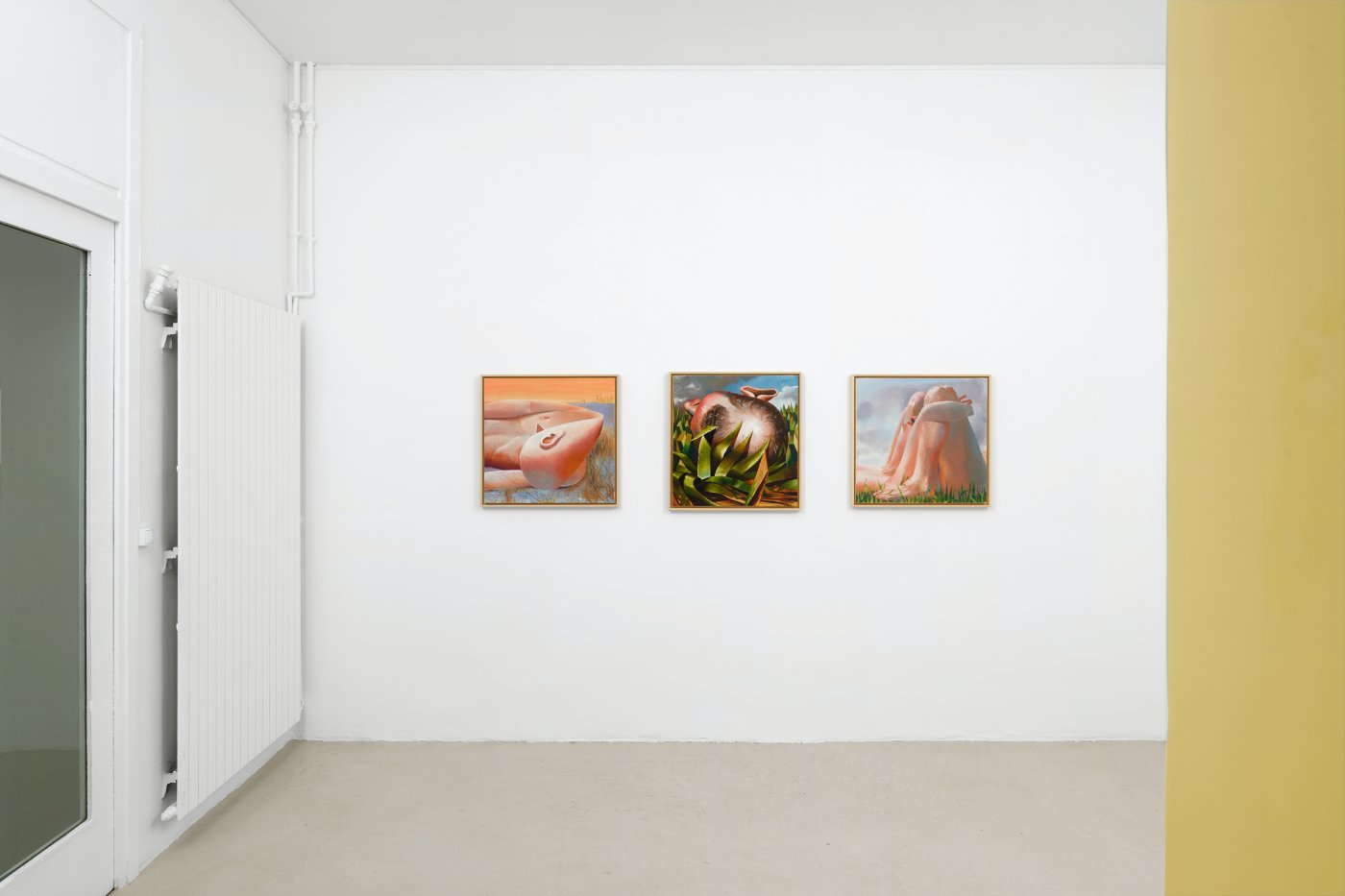 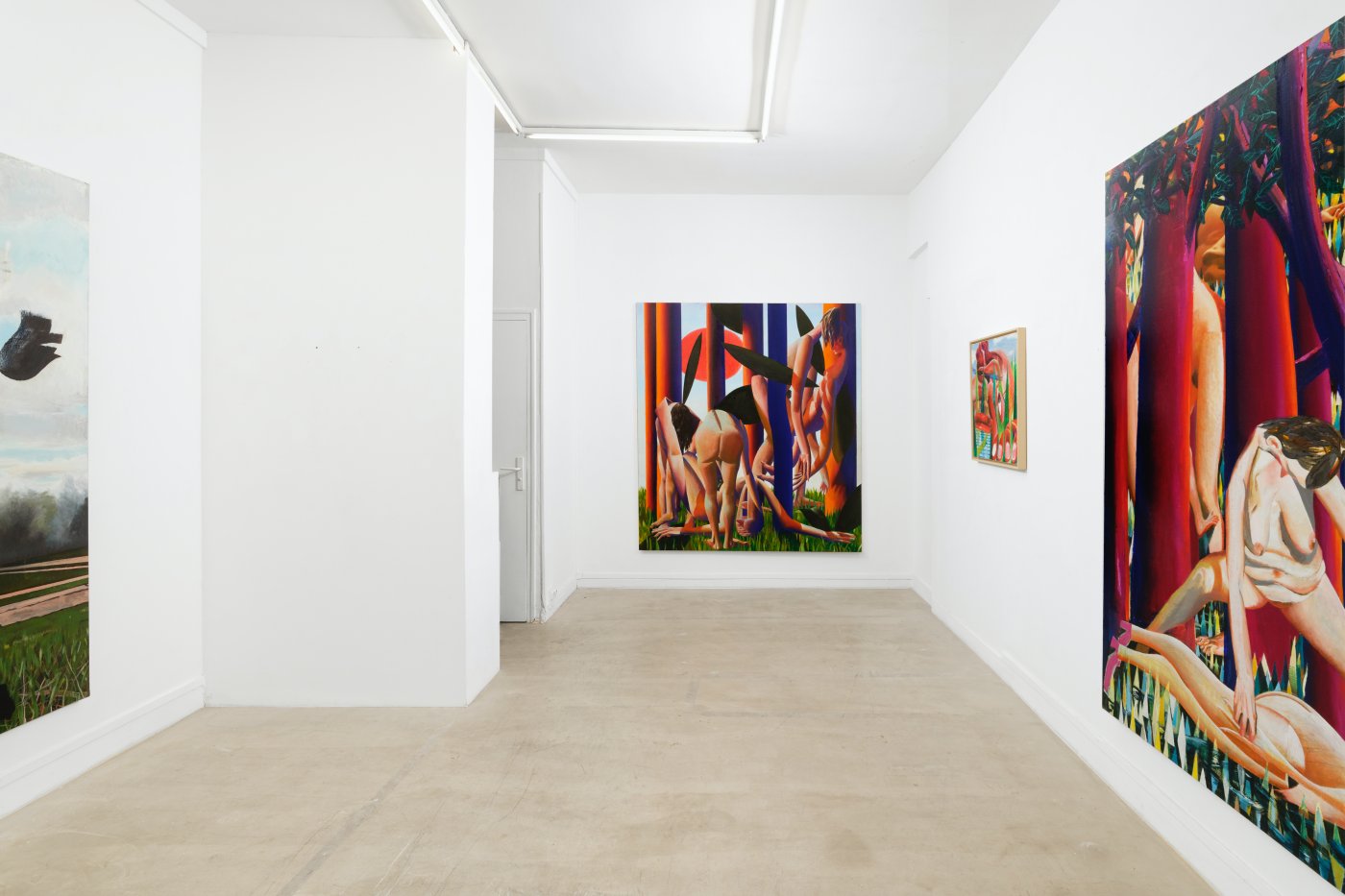 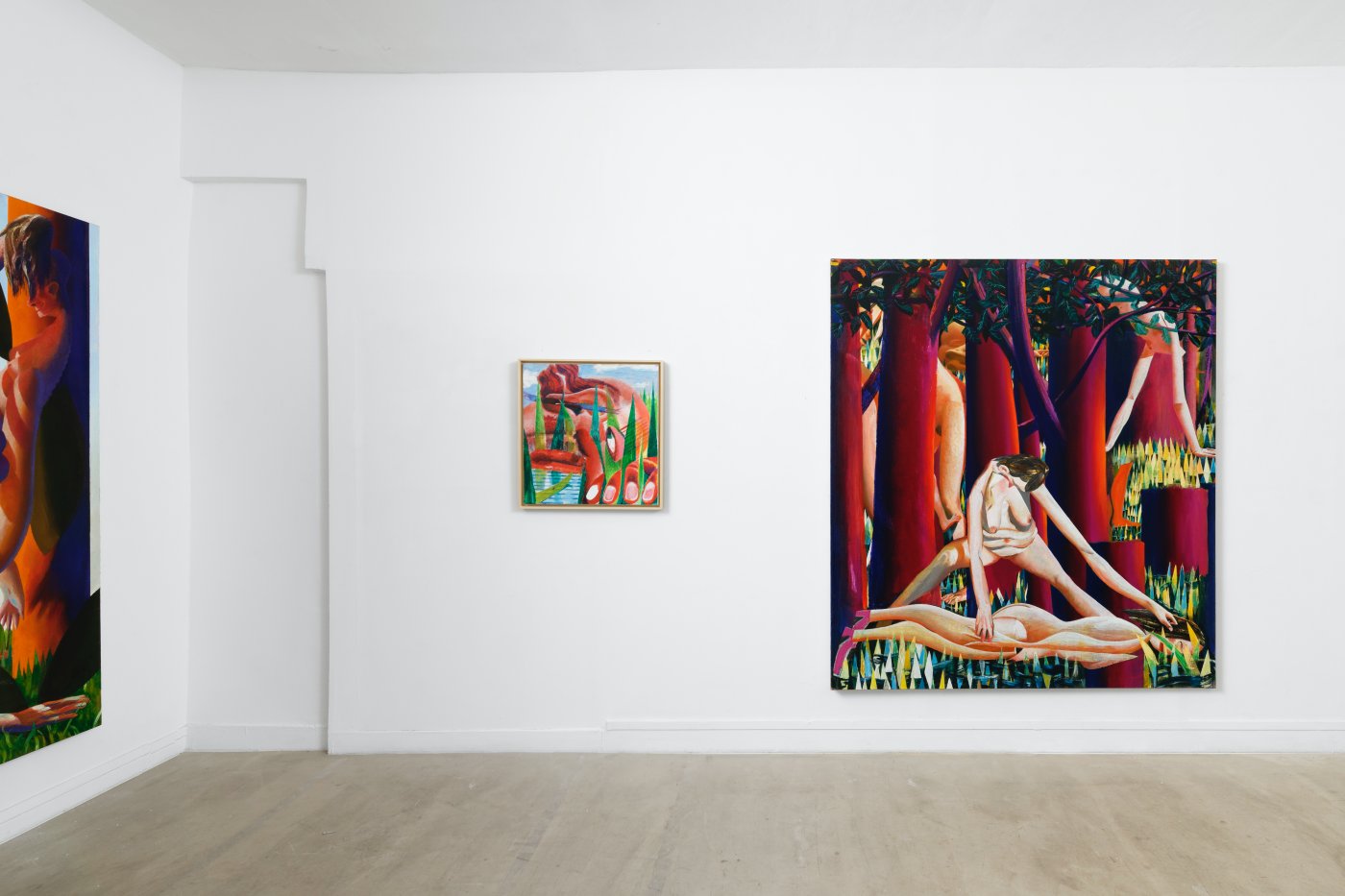 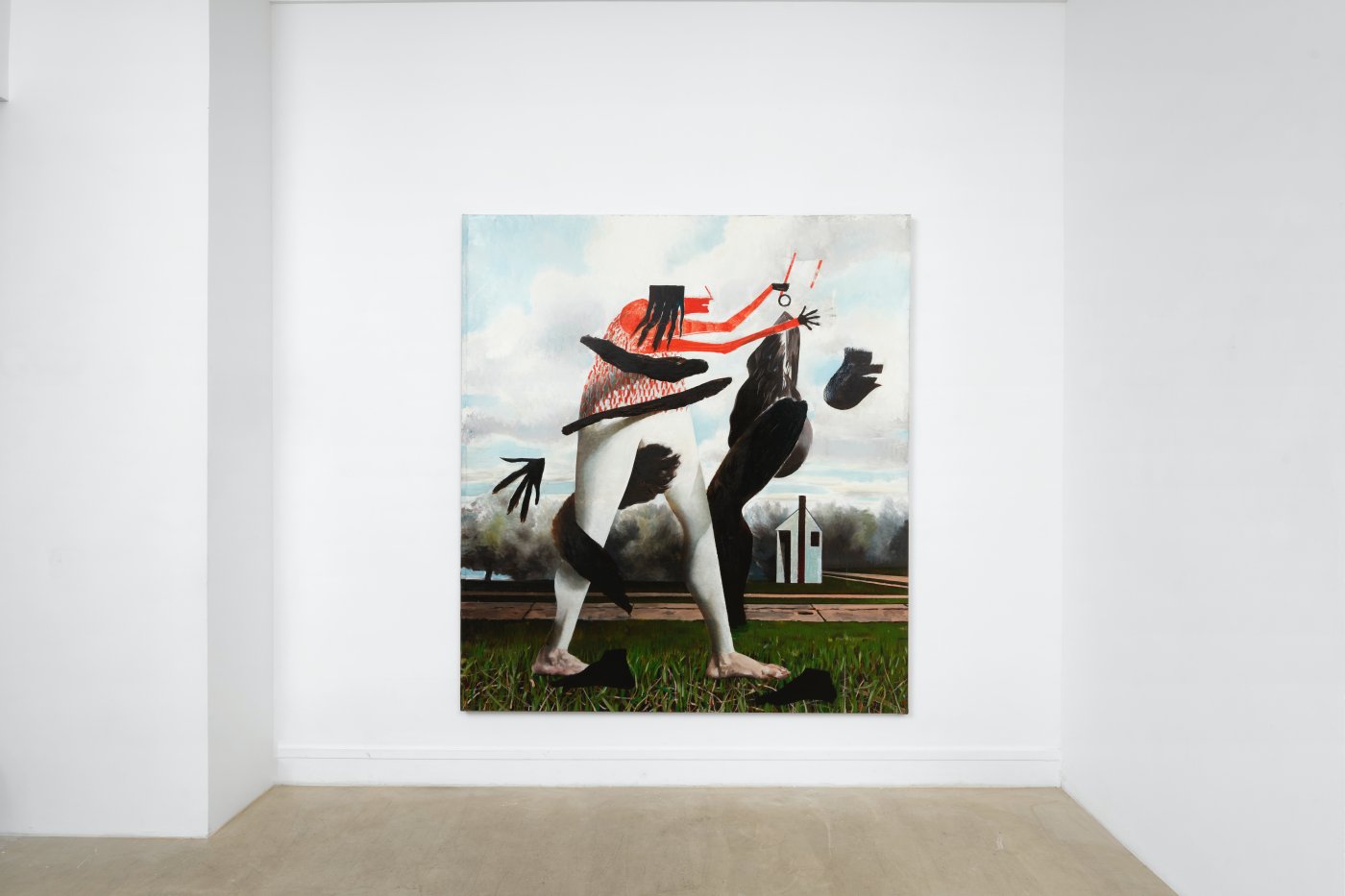 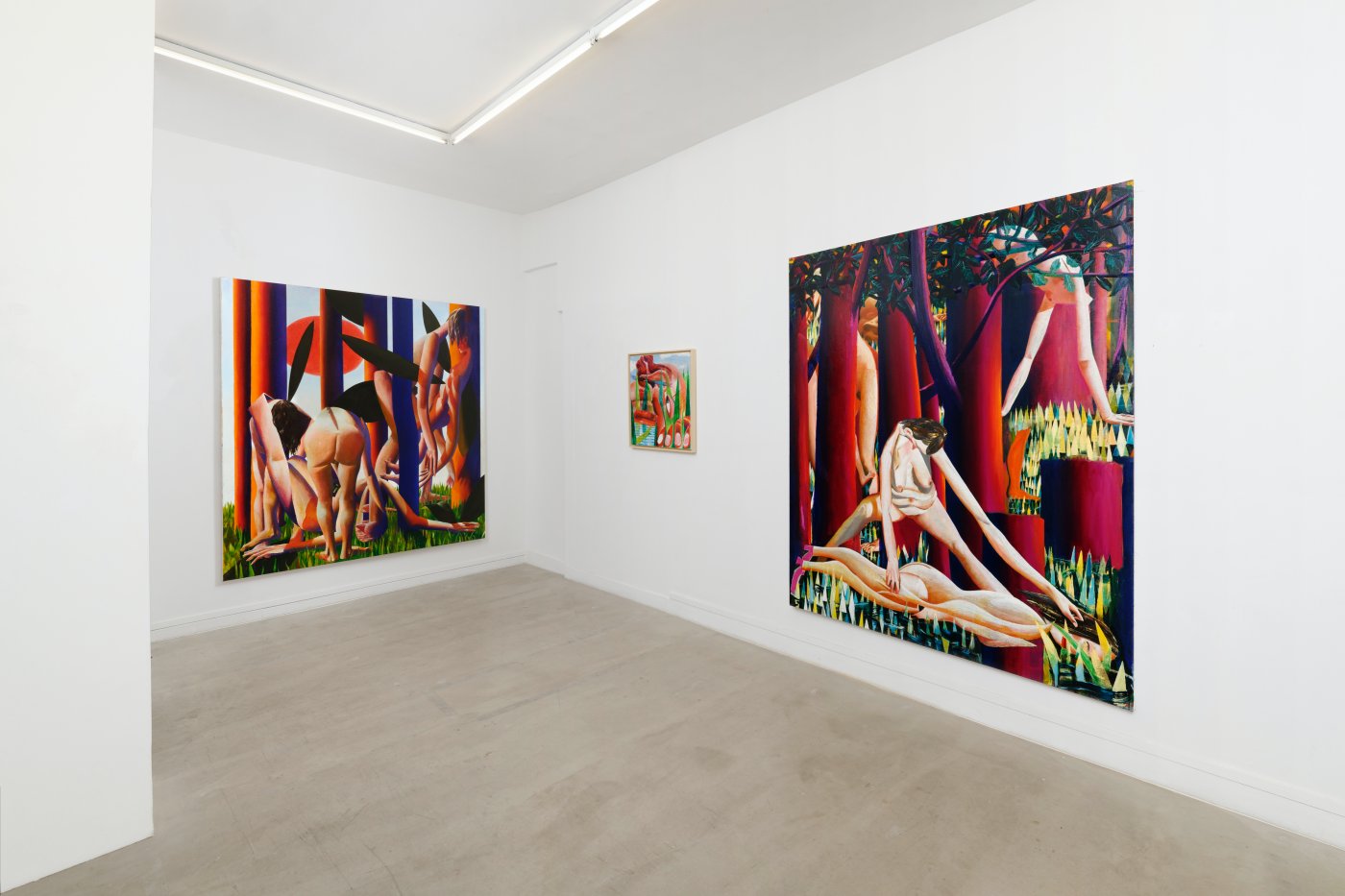 Improbable colors, indescribable lighting, a few impenetrable shadows, physically impossible bodies and remorseless deformations… In short, a perfectly unspeakable scene! An incredibly strange atmosphere emanates from the work entitled Dans la forêt II (2021), where rather than being simply displayed, naked bodies appear to be deforming or even entering into a slow process of dislocation. The action appears to be taking place in a forest of contradictory vegetation, in a welcoming grassy clearing surrounded by trees that are much less hospitable. The problem lies with their dull, unrealistic, almost electric colors, which might be those of a brothel’s neon lights that have decided to take a walk, revealing each other’s coarseness in the hard light of day. A certain electric tension also animates the bodies, whose careful outlines and precise definition do not hide certain physical inconsistencies and unthinkable postures. This ambiguous composition seems partially theatrical, played out on a stage without depth, pushing the protagonists to the forefront in order to fully expose them, while the meticulous staging almost lends them a hint of verisimilitude. Non-Stop Erotic Cabaret is the title of Soft Cell’s first opus that was released in 1981. Transposed into reality, this fantasized scene might well have been the perfect setting for the album!

This work is reminiscent of a previous, similarly staged piece: Dans la forêt I (2020), which is also set in an unrealistically colored wood framing moving naked bodies, some of which can only be partially glimpsed through the foliage. Two female figures dominate center-stage, one grasping the other in a manner that might equally imply tenderness or an act of violence. Both appear close to breaking point or collapse. “All forms of balance between interior and exterior, sensitivity, productivity and public image interest me, such as the ambivalence between pleasure and violence, the indivisibility of the body and its disassembly, that moment where things are in perfect equilibrium but at point where they could easily fall apart yet everything holds fast” (1), the artist notes.

Laurent Proux’s “cabaret” isn’t adverse to a dose of excess, and thus relies on a certain theatricality; just enough to push it in the direction of dramatization but sufficiently contained to avoid any sense of grandiloquence. The whole is reliant on a form of scenography—to be interpreted here as a visual construction—based on a precise composition of elements. So precise that over and above the usual preparatory sketches or photographic collages, the artist has built three-dimensional models, where cutout drawings that are actual miniatures of the forms to be created, are suspended as if above a stage, in order to finalize the scene as a whole.

Amongst Laurent Proux’s intriguing and incongruous works, Querelle (2020) stands out as veritable confrontation between two disparate but similar “bodies.” Similar in that there are two oversized hands facing each other, seemingly weighing each other up. Disparate because they look nothing alike: one is feminine, dark-skinned with long bright red nails, poised in a movement of threatening sensuality, while the other is masculine, white with a dull complexion and with a black glove and mask with a red clown’s nose grafted onto two of its fingers. Once again, the potential for violence emerges. The two could well be in conflict and the threat of escalation looms. Above all there is nothing innocuous about the setting, an industrial production site. The motif of the factory workstation has been a preoccupation of the artist for many years, one he has always imagined as being devoid not only of life but also of any physical presence. On this occasion the space has been reinvested with a new corporality. To be more precise, by bodies that are not really bodies, but which are inserted in confrontation into an industrial setting, sparking questions relating to capacity, productivity and to control… of the body and soul.

In their formal definition—the deformation and restriction of the bodies, the false familiarity yet disturbing strangeness of the atmosphere and décor¬—as much as the social and political message of the works within a global context, Laurent Proux’s painting brings to mind the work of Hans Bellmer. There is not the same touch of surrealism informing Proux’s oeuvre, but rather an approach that seems to be full of affinity with his predecessor, beyond the recurring presence of a latent but never purely explicit eroticism—in the sense that he resists any kind of realism—he maintains his conception of the motif as a product of assembly and disassembly of construction and deconstruction.

This is where a series emerges that at first glance seems to go against everything that has thus far been stated. Soberly entitled Têtes (Heads) (2020-2021), it is made up of ten, almost square, medium format paintings, all based around the same principle of a head lying on the ground outside, nestling in thick and enveloping grass. Benevolence seems to come to the fore once again. In the first place because the setting seem less strange, hostile or threatening, with clear skies in most cases, nature that seems more welcoming and certain positions that indicate rest and even relaxation. Secondly, a closer look at the faces shows their expressions of strength or fragility, which might well elicit certain feelings of empathy from the spectator.

However, without completely negating this impression, an even closer look might leave one feeling more circumspect. Because the “soft grass” sometimes becomes more arid, some of the positions take on an ambiguous air once again, and on closer inspection the tight framing reveals a certain harshness, strangeness and quasi obscenity. Undoubtedly one of the reasons for this is that in Laurent Proux’s work, the characters never appear as identifiable individuals endowed with a potential self; he manages to show us bodies that are not really figures and heads that in fine, resist the depiction of faces. The mind-boggling Tête dans l’herbe (n°5) and Tête dans l’herbe (n°1) seem to be scattered across the canvas in many pieces and freed from any need for physical veracity. They rejoin the figures we have already seen that were formless or deformed, in evoking fascination as well as a certain unease. Bodies and landscapes have disintegrated to re-emerge as an indecipherable entity. Are they fragments from the mise-en-scene of a reality that has shattered because it is impossible to depict?

(1) Conversation between the author and the artist. Pantin, February 6, 2021.

Frédéric Bonnet is a Paris-based art critic and curator. He has contributed to publications such as Le Journal des Arts, Vogue France, L’Œil, Art Press… and was a radio journalist at France Culture between 2011 and 2020. Notable exhibitions he has organized include, Sheila Hicks at the Bass Museum, Miami Beach (US) in 2019 and the Museo Amparo, Puebla, Mexico (MX) in 2017, AA Bronson & General Idea at the Esther Schipper Gallery, Berlin (DE) in 2018, General Idea at the Musée d’art moderne de Paris (FR) and the Art Gallery of Ontario, Toronto (CA) in 2011. Since 2013 he has been part of the Selection Committee of the Jean-François Prat Prize, devoted to emerging painting.