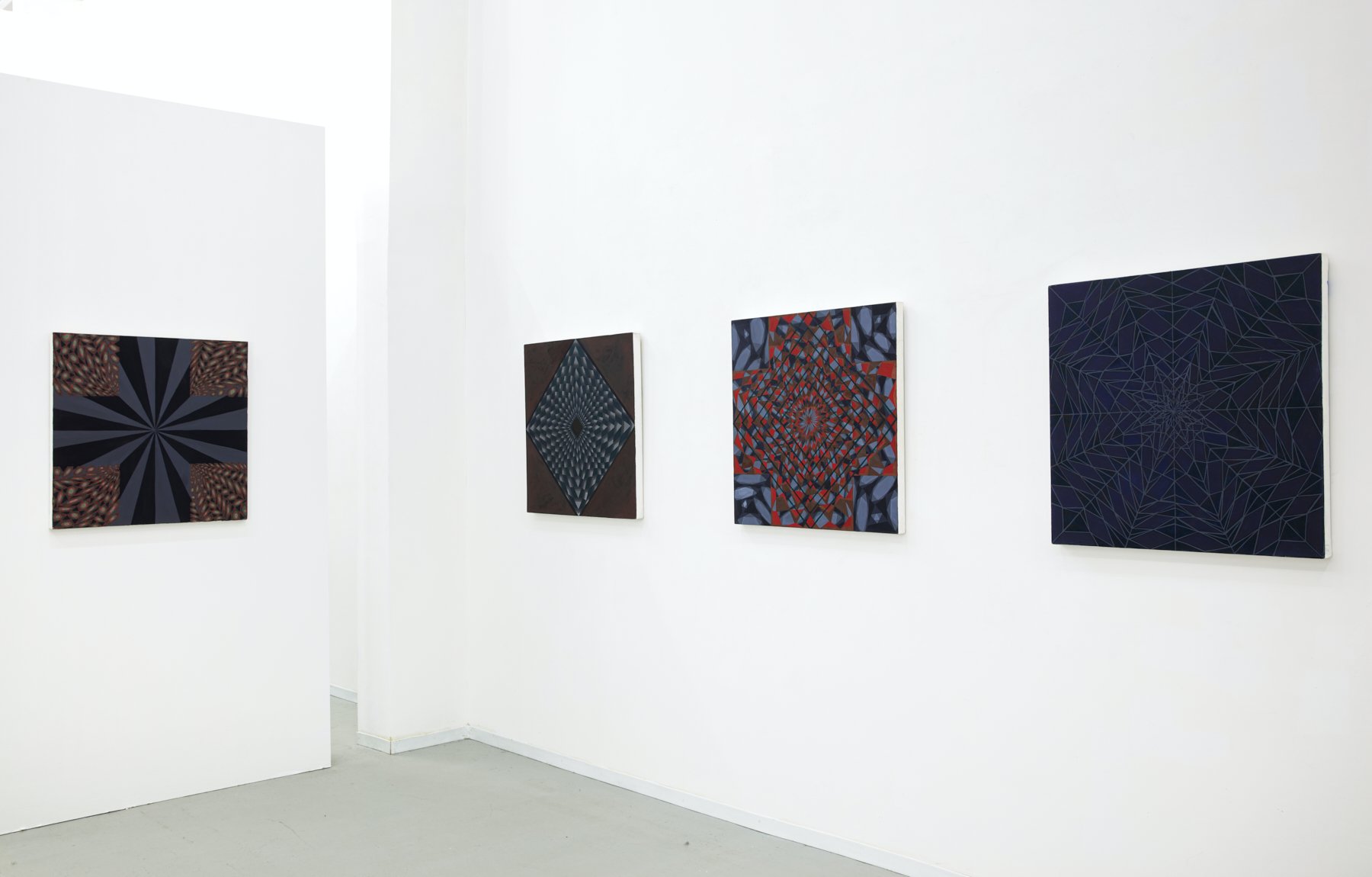 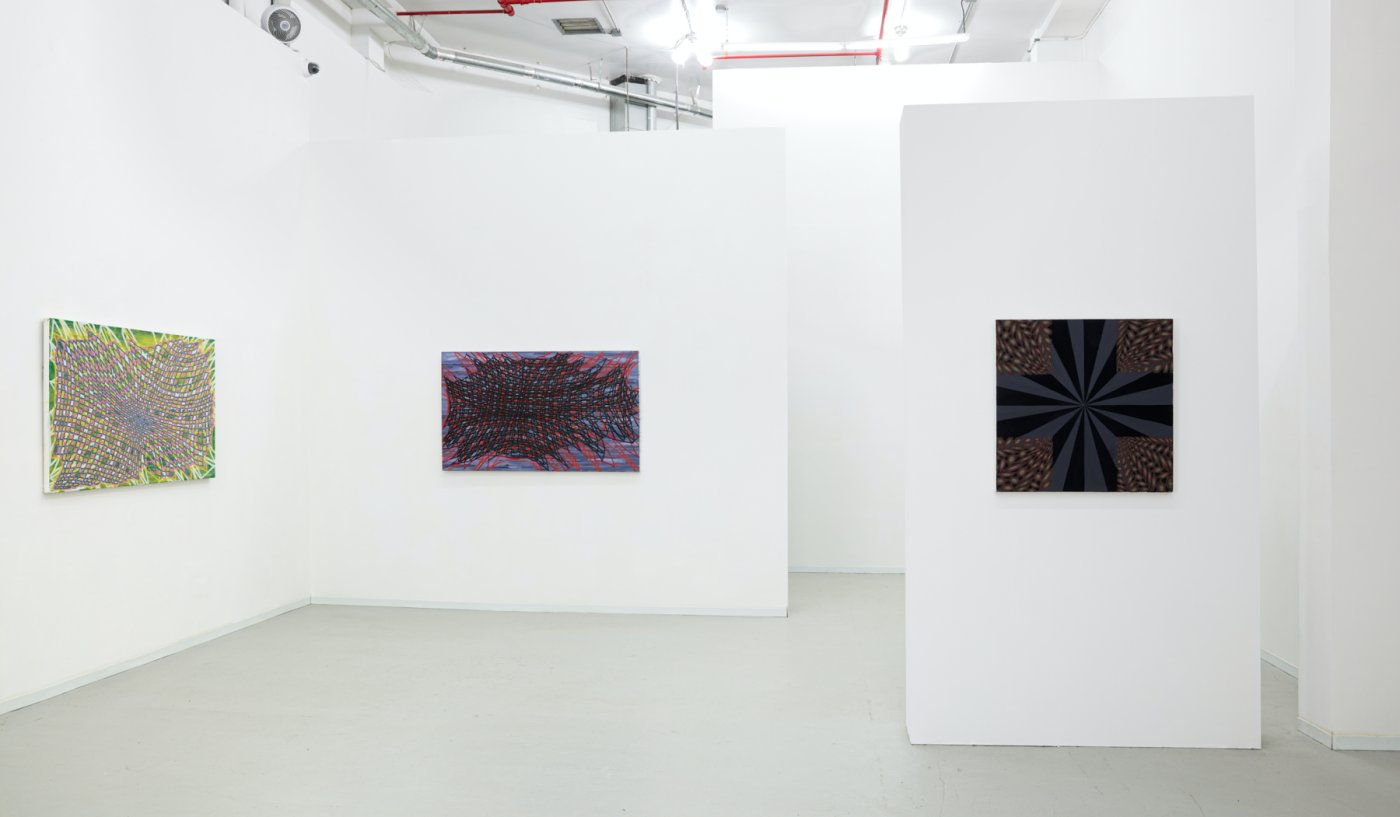 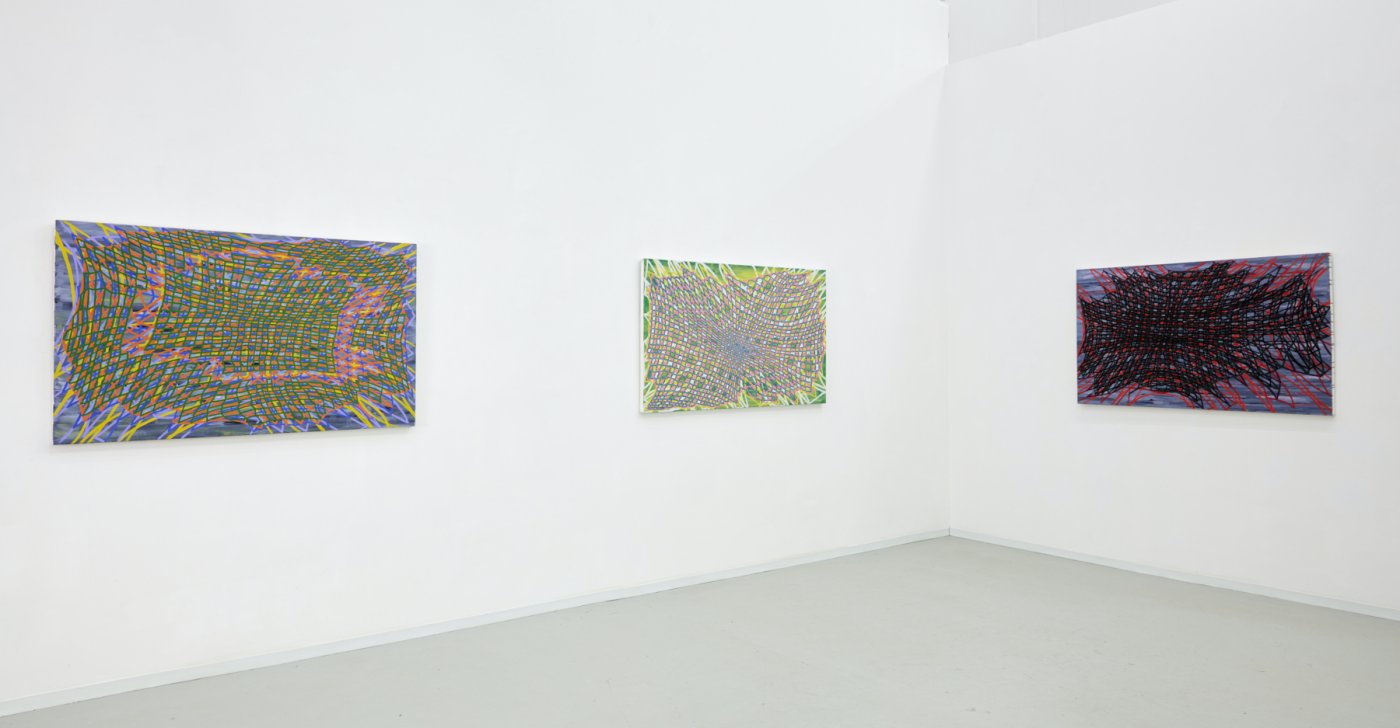 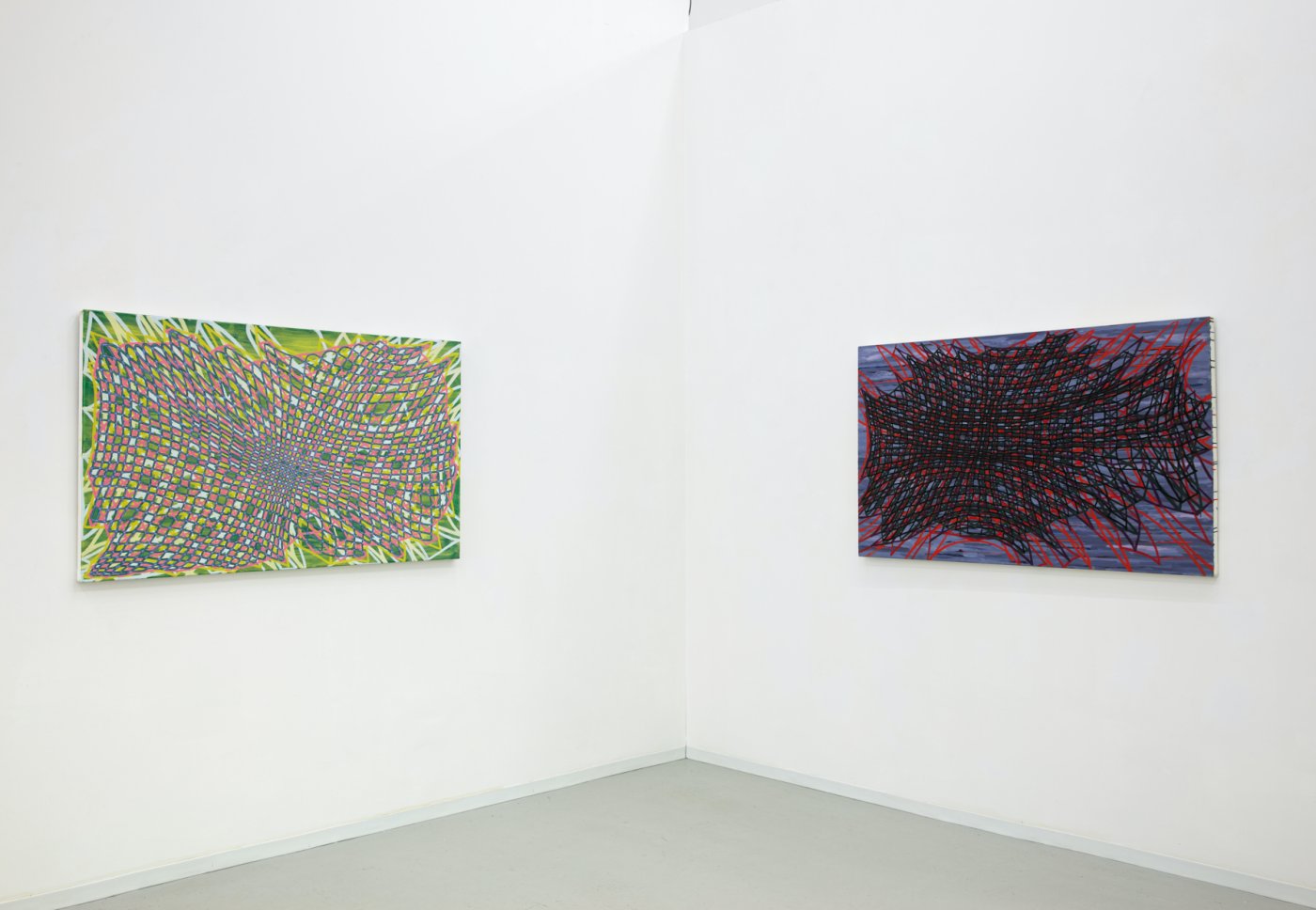 Both series rely on formal elements of lines and modified grids with centrally situated canvas-filling compositions rooted in similar concepts and inspirations. The earlier series painted in 2016, Open Ceiling, includes 6 square canvases each comprised of a grid composition and vector geometry reminiscent of Mandalas and intricate spider webs and measuring 30 x 30 inches in mostly neutral palettes of black, grey, white and brown and only two canvases having the color red. The paintings in the more recent Hide series were painted from 2018 through 2021. The lines are curvilinear with fluid and irregular grid structures that pull loosely toward the four corners of rectangular shaped canvases, evocative of large nets or animal hides. The paintings in the Hide series measure 36 x 60 inches or 44 x 70 inches and each explores a distinct and wide range of colors from bright and colorful to darker and moody.

About the Open Ceiling Paintings:

The impetus for the Open Ceiling series was Watt’s need to understand and work through the mourning process and the “transcendence of that process” following the loss of her mother and a major move to a new state and home in her recent past. She turned to her art and passions to frame her feelings and thoughts and the series emerged in the winter of 2016. Watt stated that, “one of the goals of the paintings is the knitting of interior, psychological space, emotional feeling with line, color and geometry using pattern language to condense and codify these narratives.” Ceilings are an interesting metaphor for many things, they can refer to a physical structure in a building that houses and protects us, providing warmth and comfort as a safe space. They can also be a psychological barrier or limitation perceived in one’s mind. The artist saw this series as, “an antidote to […] clear house, so to speak, and look up at and through the ceiling.”

Watt drew upon her passion for textiles and patterns to create the Open Ceiling series. The paintings earlier in her career were inspired by and evocative of quilts and geometric patterning. The artist’s own choice of verbs conveys this passion still today as she used “knitting” as the best way to describe her process in paint. It is interesting to note that the grounds of the new series of paintings are brushy, somewhat translucent and read as monochrome with dynamic and layered lines and patterns on top with a limited palette—only in 2 paintings does she us the color red and only occasionally a small amount of blue. Otherwise, the palettes are neutral and rely on the use of lighter color values and white to create the bold arrays of patten that either criss-cross diagonally across the canvas or generate bold cross shapes that span edge-to-edge to create distinct quadrants. Watt posits, “As the series progresses 1 through 6, the color moves from liberating the viewer from the monochrome understructures of the ceilings, to the monochrome vector providing a way out of the razzle, dazzle of the colored tiles congregating in the corners.”

About the Hide Paintings:

The Hide paintings began about a year after the Open Ceiling series. The motivation for this work was to focus on the mark and in particular, the gesture as well as the physicality and act of making such gestures. Thus, the large scale of the canvases allowed for longer, fluid curved lines and the resulting robust organic shapes. The layering of multiple grid structures one on top of the other—either perpendicular, in parallel or on the bias—creates complex shapes and negative spaces. The number and density of the grid lines creates interesting patterns as the color of the lines of the grids that were laid down first begin to fill in the voids of the later and uppermost grids. In the most densely layered paintings, the resulting compositions, combined with the use of a wider palette and brighter colors, are reminiscent of topographical views of gardens. In the less dense compositions, as the outer perimeter tugs at the edges of the grids, interesting outer elliptical organic loops emerge as some of the lines recoil on themselves, while others create an outer shape that resembles animal hides as noted above.

The word “hide” has another meaning, to keep out of sight, to conceal something or someone or the use of camouflage to blend in and not be noticed. This dichotomy or binary interpretation of a word, such as “hide”, is also a very common visual and aesthetic method in Watt’s studio practice. It is also apparent in this recent series of paintings as she notes, “The larger hides make a rather grand crescendo to the group, Come to Me is elegant, the mark more formalized becoming decorative in its courting of new forms – the loop/seed. Flashy. Dawn Dread is its “Goth” partner, all atmosphere and mood.” Dual meanings and multiple interpretations of titles and imagery are frequent and a part of Watt’s approach to search for new spaces and content.

In both the Open Ceiling and Hide series, a certain amount of literalism is implied with the use of the words “ceiling” and “hide” as both refer to an outer shell or barrier that provides security and protection. However, as Watt shared the underpinning and influences for these series, it becomes more apparent that she is also using these words as metaphors for psychological boundaries as well as devices to obfuscate from others the fears and insecurities that we all harbor and further, using those devices as personal armor for preservation and protection.

The grid structures in the Open Ceiling paintings create openings for the person on the inside to see breaks and opportunities to go beyond and escape through the ceiling. However, the grid structures are not entirely transparent, they are not a complete barrier, while someone on the outside of the ‘ceiling’ can get a partial view of the person on the inside, they cannot achieve complete access. Thus, metaphorically, the grids function as a partial shield or layer between one person and another (or group), a psychological camouflage that hides some information.

As noted in the Hide paintings, another reading of the compositions is of gardens and yards. A yard is considered a boundary of one’s property and home, thus typically a safe place. However, it is not impervious and the yard can be viewed from outside the boundary. While fencing, shrubbery and gardens can filter the view, they cannot completely prevent spying or taking a peek.

Throughout Watt’s artmaking practice, she has always gravitated toward geometry and combining that rigor and structure with more organic forms and shapes. As artworks or particular compositions and gestures have gotten too pristine or too perfect, she then shifts to “cartooning” and lightening up the work so as to focus only on the essence of her subject and not take the approach or herself too seriously. The artist states that, regarding “both of these bodies of work [Open Ceiling and Hide series] and [her] paintings generally, one of the subjects, actually, the main subject of the paintings is finding new spaces, new structures, and new geometries. Among other things, this speaks to countering hostile, exclusive spaces, structures and geometries.”

Laura Watt was born in Lancaster PA and currently lives and works in Garrison, NY. She studied at Bennington College and earned her MFA from Yale University. Watt”s paintings and drawings have been shown nationally and internationally including exhibitions at: MACA, Philadelphia; St. Joseph’s University, Philadelphia; Phillips Museum at Franklin & Marshall College, Lancaster; State Museum of Pennsylvania; and Lancaster Museum of Art, Lancaster all in Pennsylvania; and Aldrich Museum of Contemporary Art, Ridgefield; New Haven Museum, New Haven; and Stamford Museum, Stamford all in Connecticut. Watt has also exhibited at McKenzie Fine Art, Bridgette Mayer Gallery, Lesley Heller Workshop, Locks Gallery and numerous other galleries and institutions. Her artworks are in the collections of Lancaster Museum of Art and many private collections. Watt taught at Tyler School of Art for 5 years and presently sits on the board of the Vermont Studio Center.