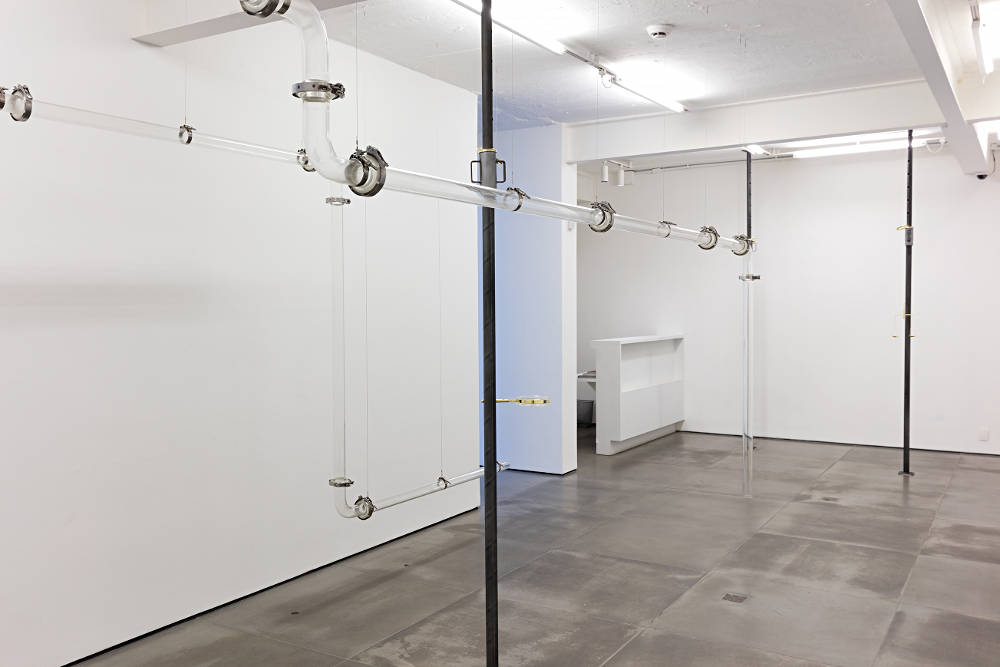 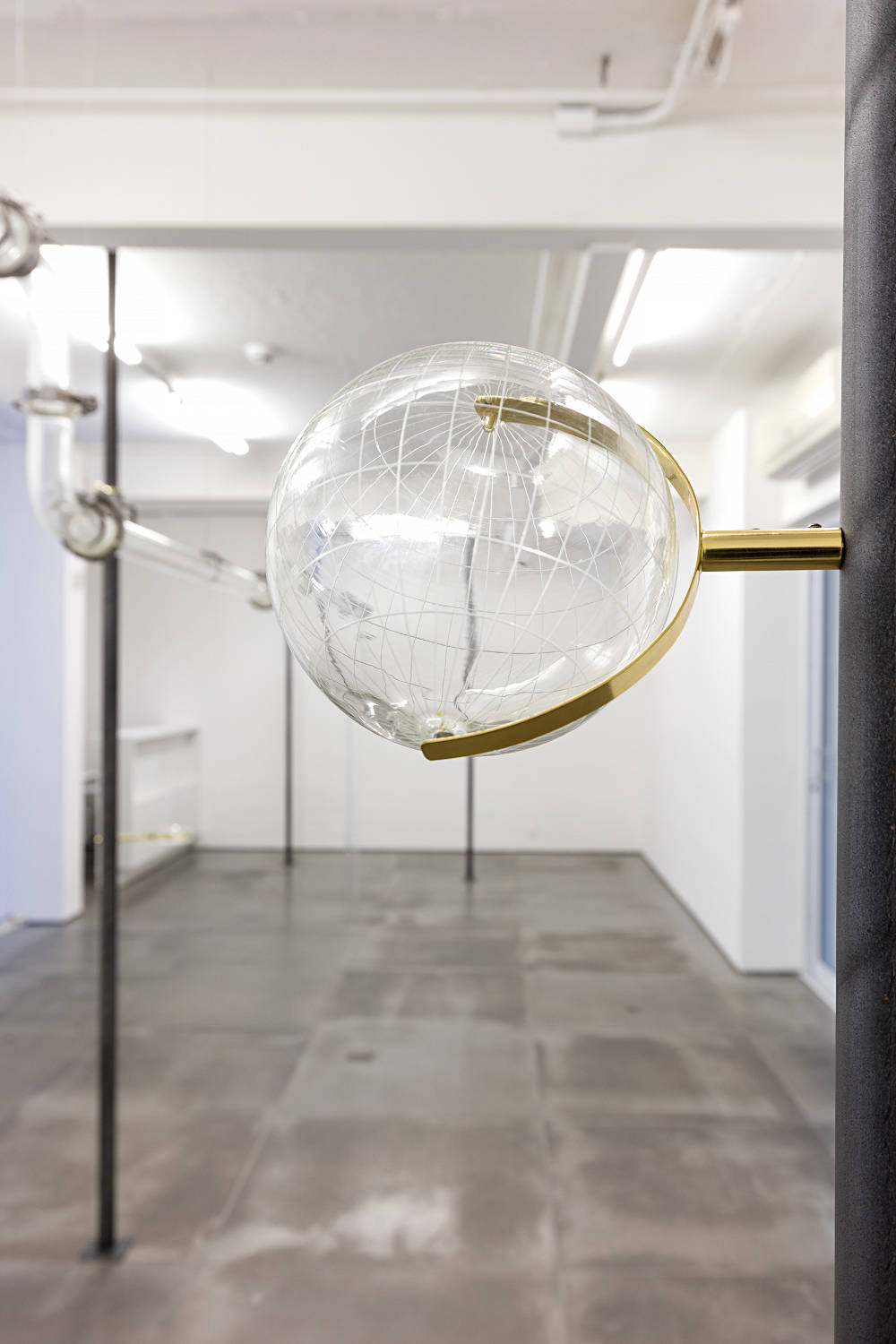 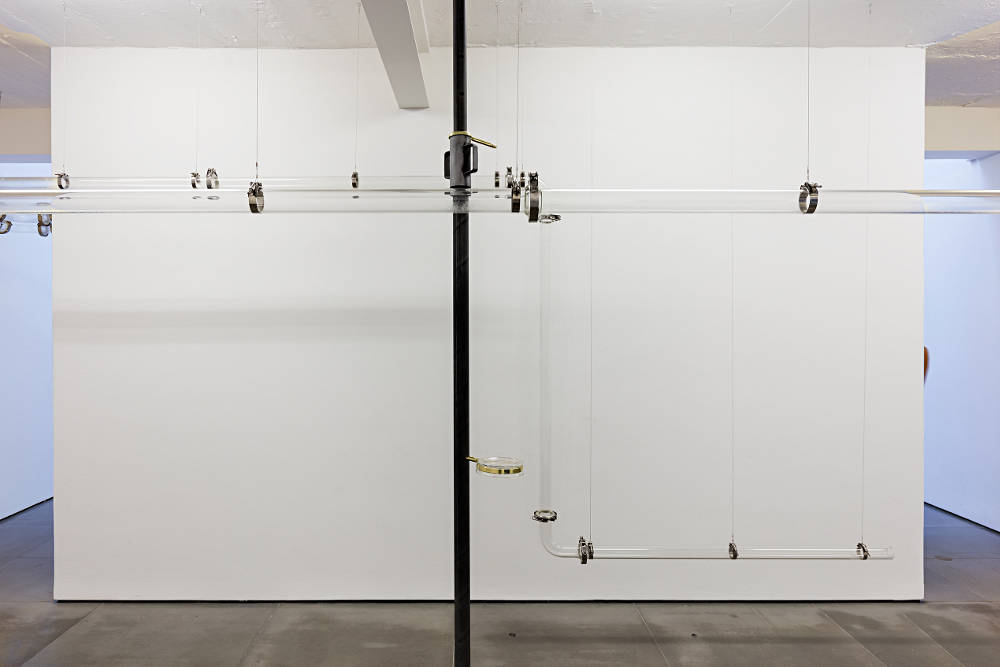 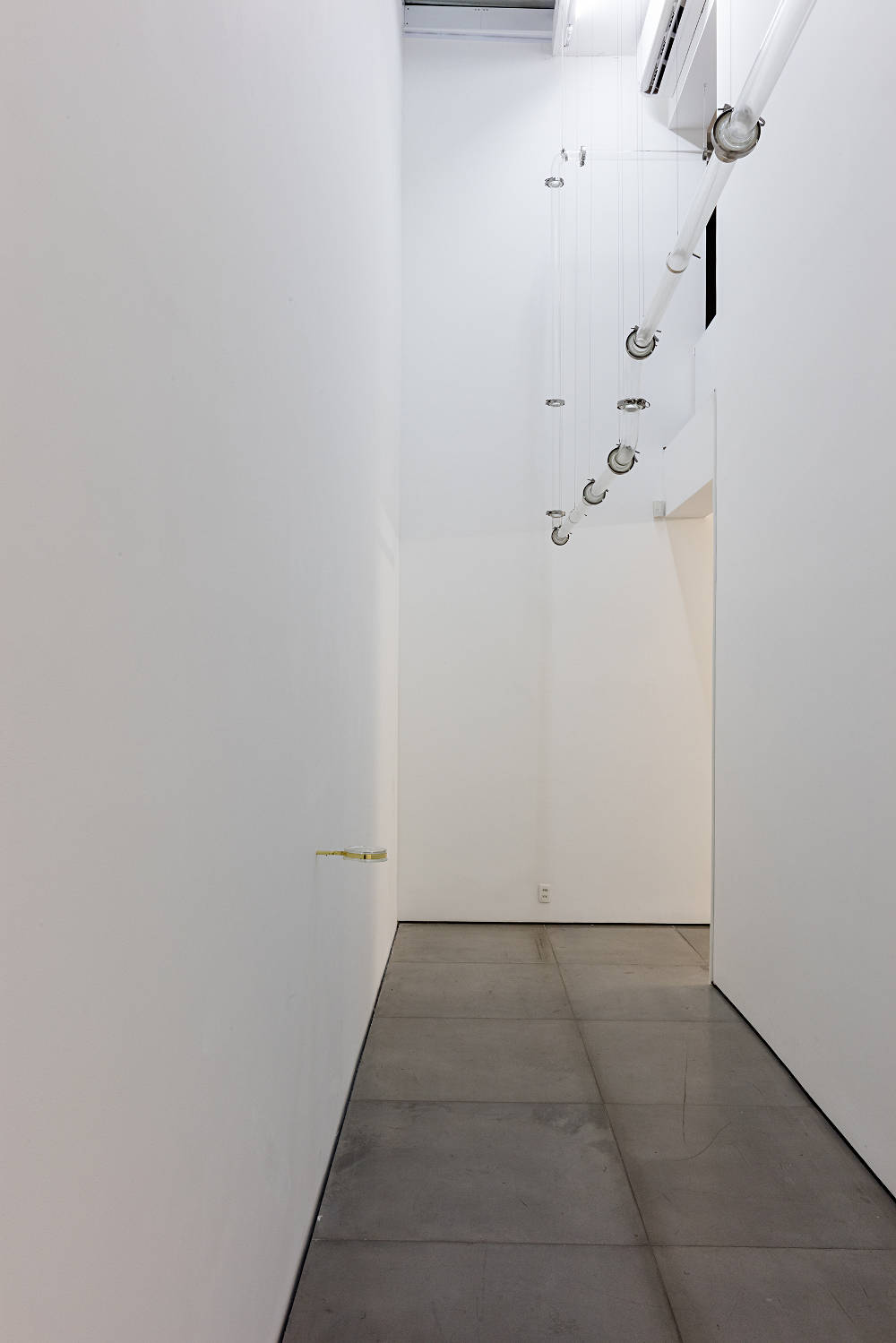 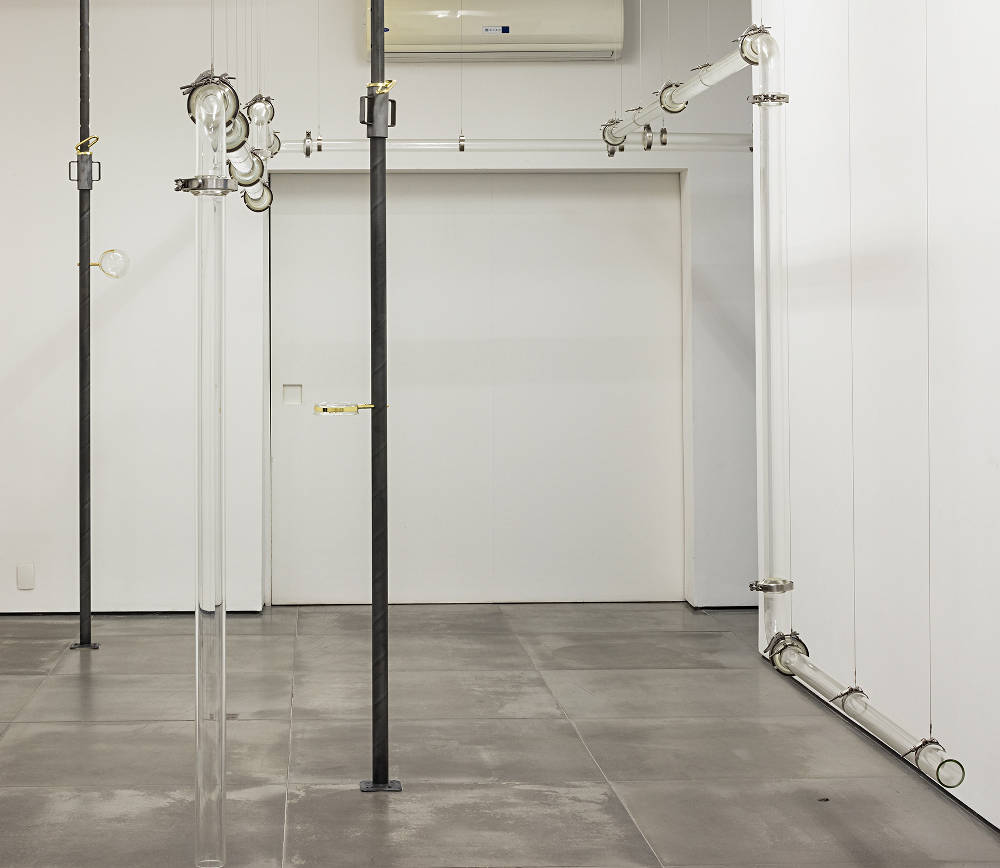 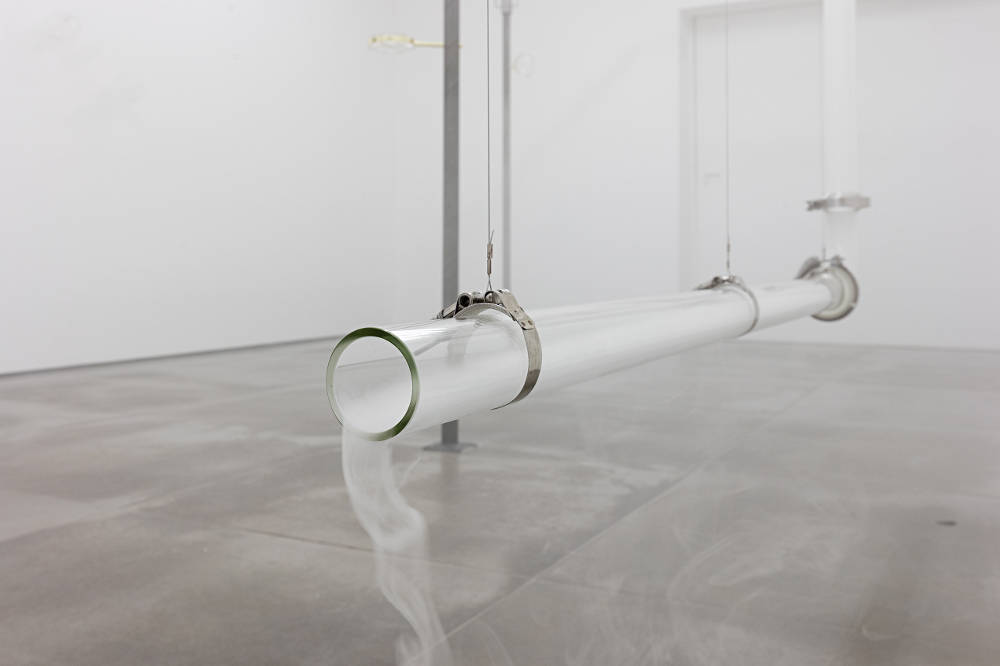 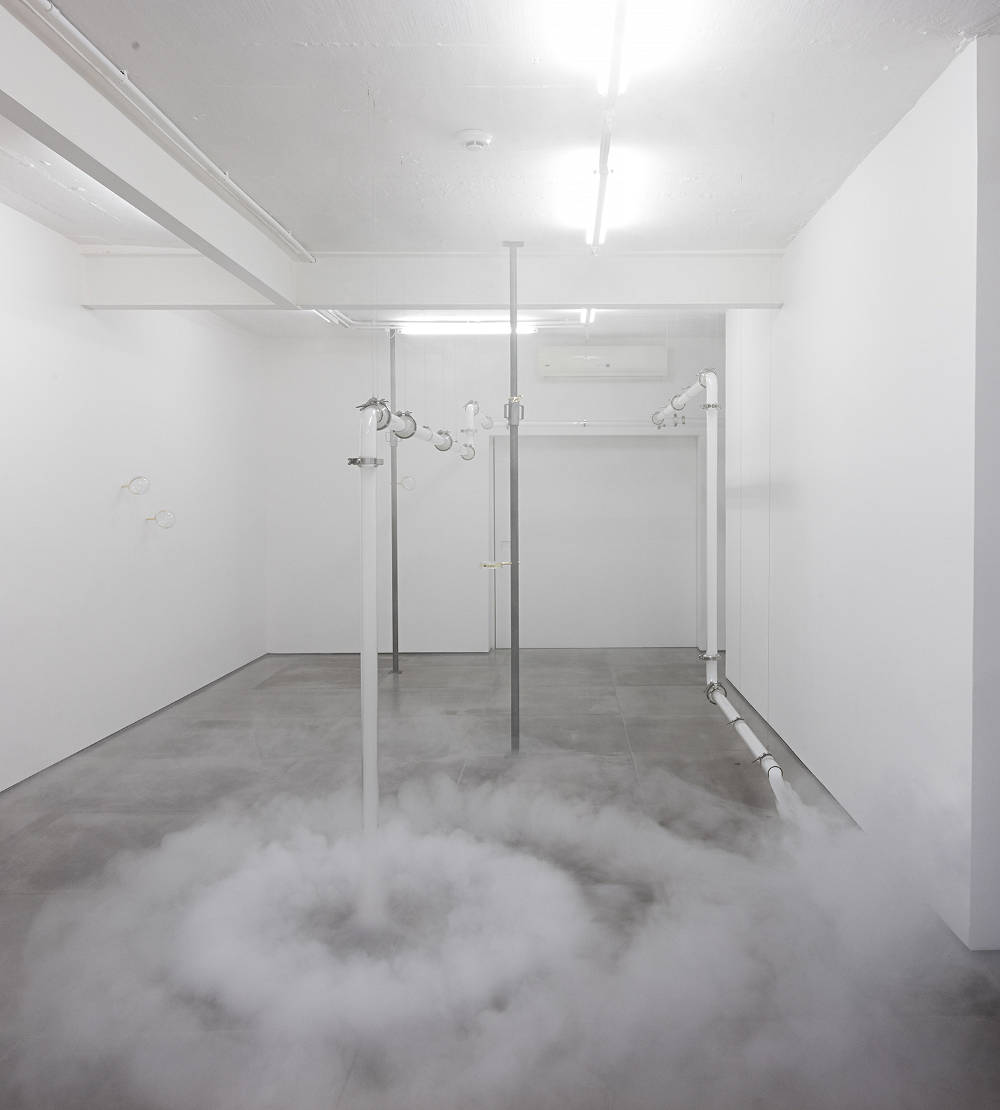 The artist from São Paulo attracted attention in Rio de Janeiro due to her works such as the surprising “chuva de ouro” [“gold rain”], a site specific conceived for the CCBB’s Rotunda in the exhibition “Ouro – um fio que costura a arte do Brasil” [“Gold – a thread that sews Brazilian art”] (2014), and her celebrated scenography. One, for O Duelo [The Duel], the play in which Camila Pitanga returned to theatre after 10 years (2013), and, another, for O Idiota [The Idiot] (2011), both plays produced by Mundana Companhia and staged on Tom Jobim theatre.

Recognized for her particular narrative, poetic and politics, concerning body, space and the ephemeral, Laura Vinci presents her most recent installation. Morro Mundo will occupy the gallery with a smooth white smoke and will invite the visitor to experience spatial disorientation and body reorientation. Her machine programmed to release smoke as its presence sensors are activated, reveals itself to the spectator by its glass pipes that cross the whole exhibition area. Unlike other works that use water vapor, as the artist made in the MuBE and in the Beco do Pinto, in São Paulo, in this installation, the vapor is announced before it is released in the air. This way, the pipes not only announce the experience, but also, are windows in which the eye can catch the smoke in a controlled situation. After it is released, the smoke dominates the space, turning the pipeline almost invisible to those who observe the scene at the same time that are engulfed by the fog.

The installation is composed also by shinning golden objects that hang in the struts distributed in the space, activating the notions of height from the ceiling and distance from the walls. “These tiny objects present themselves as hourglasses, compasses, maps and other measuring tools, that could help us to continue the voyage”, suggests Laura. The pieces carry small samples of granada, rocks that, by symbolizing the impulse and determination, evoke a desire of transformation.

Morro Mundo is another work by Laura Vinci that alludes to the uncertainties of current times by proposing an experience that confuses and exhausts in a space of silence and emptiness. For the artist, maybe another language and another time should be invented: new words, gestures and forms of action. What Laura Vinci proposes in Morro Mundo is a pause, a displacement to the basements of the superstructure, a careful gaze to the transformation processes: of temperature and pressure, of the states of matter, of the bodies and spaces.