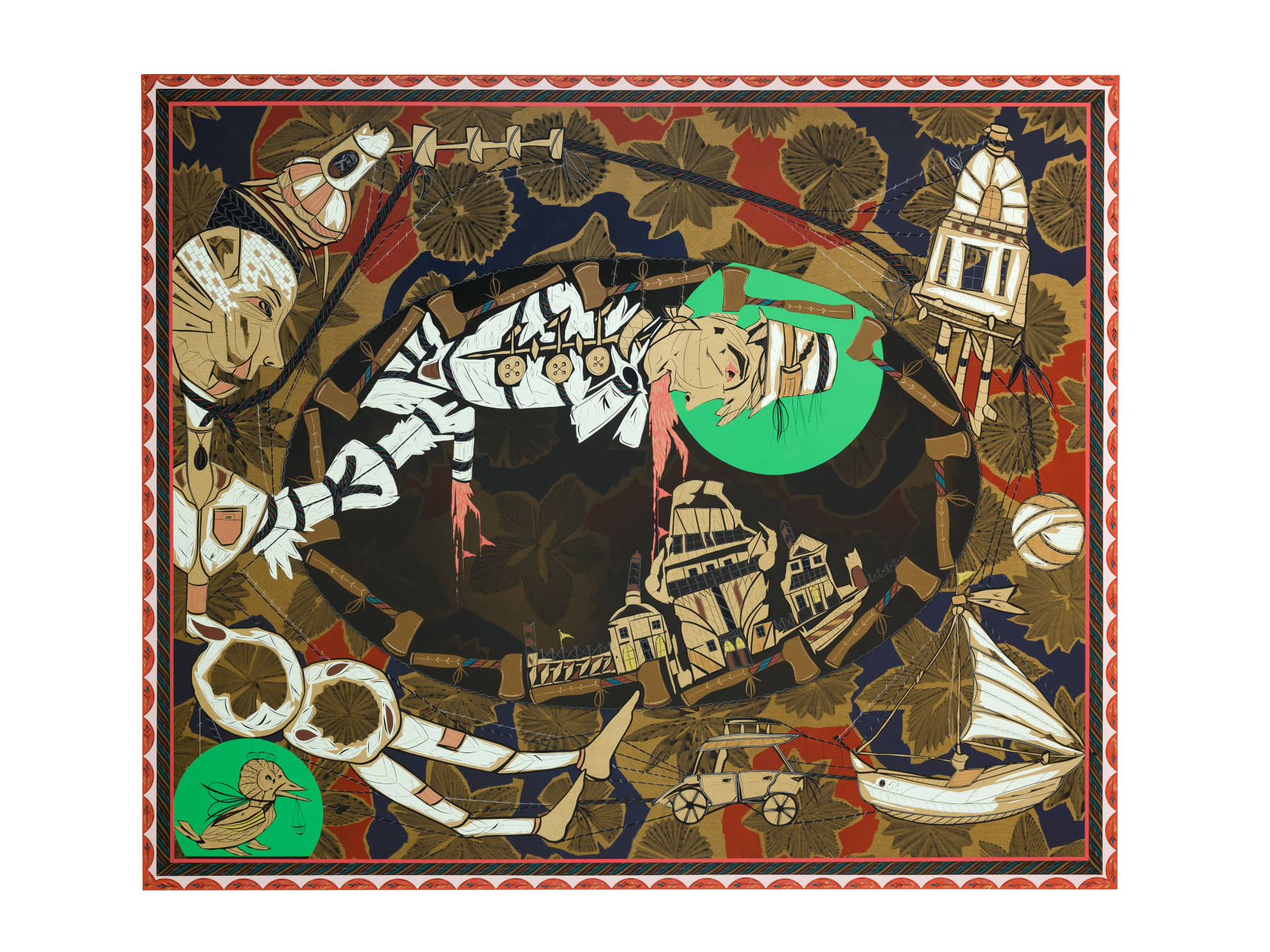 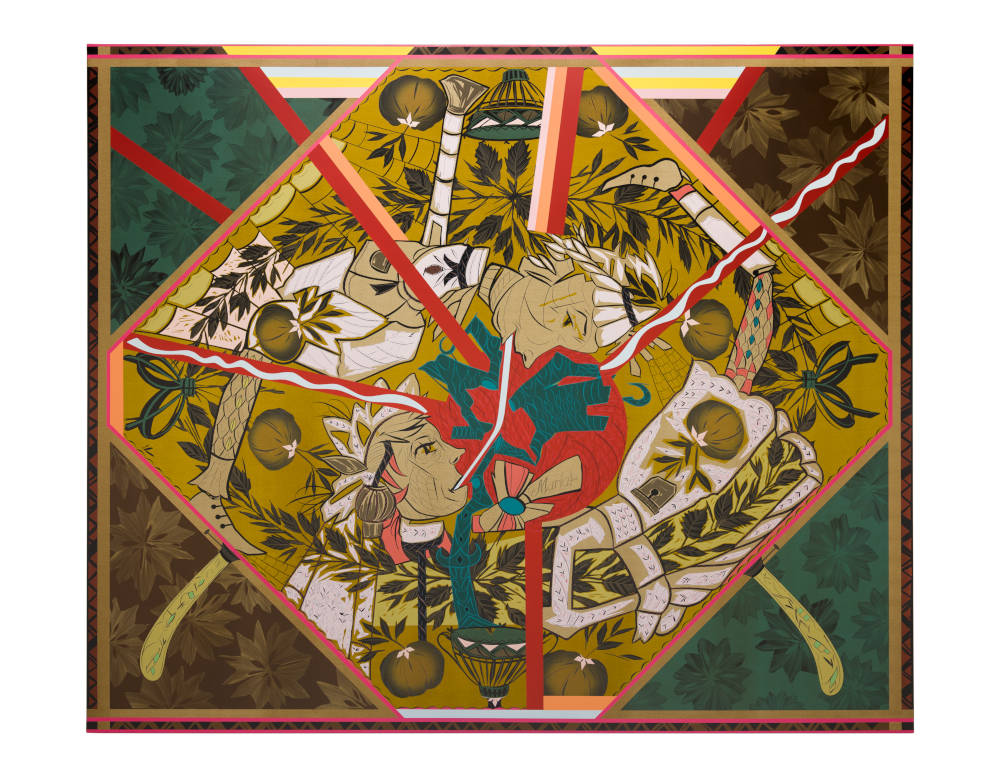 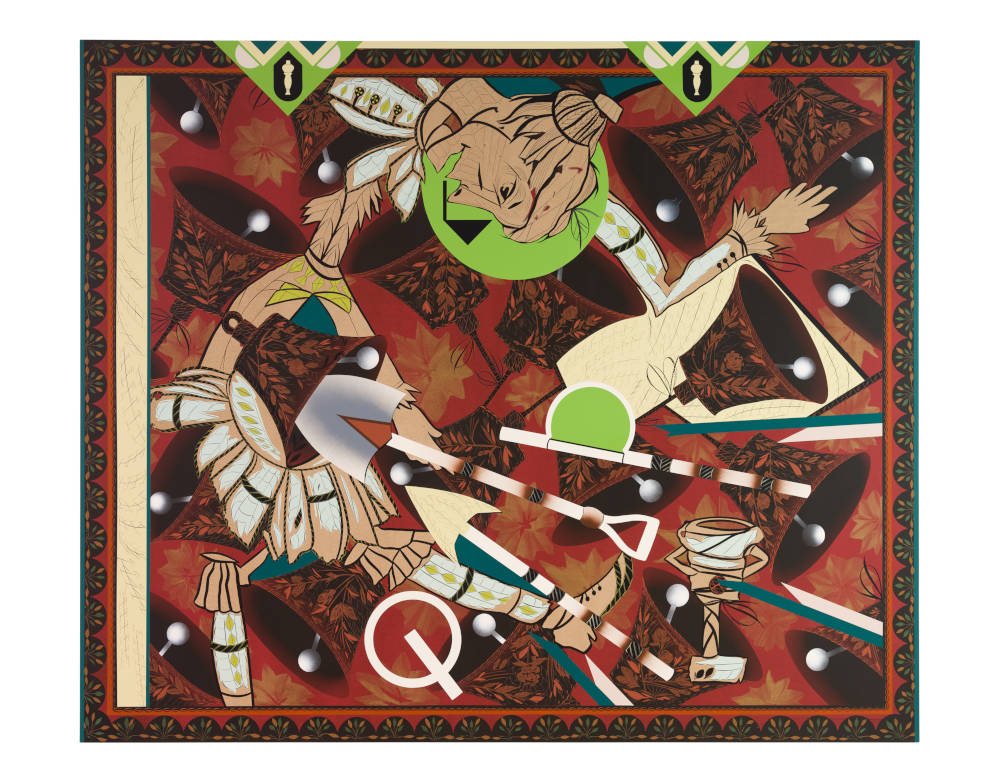 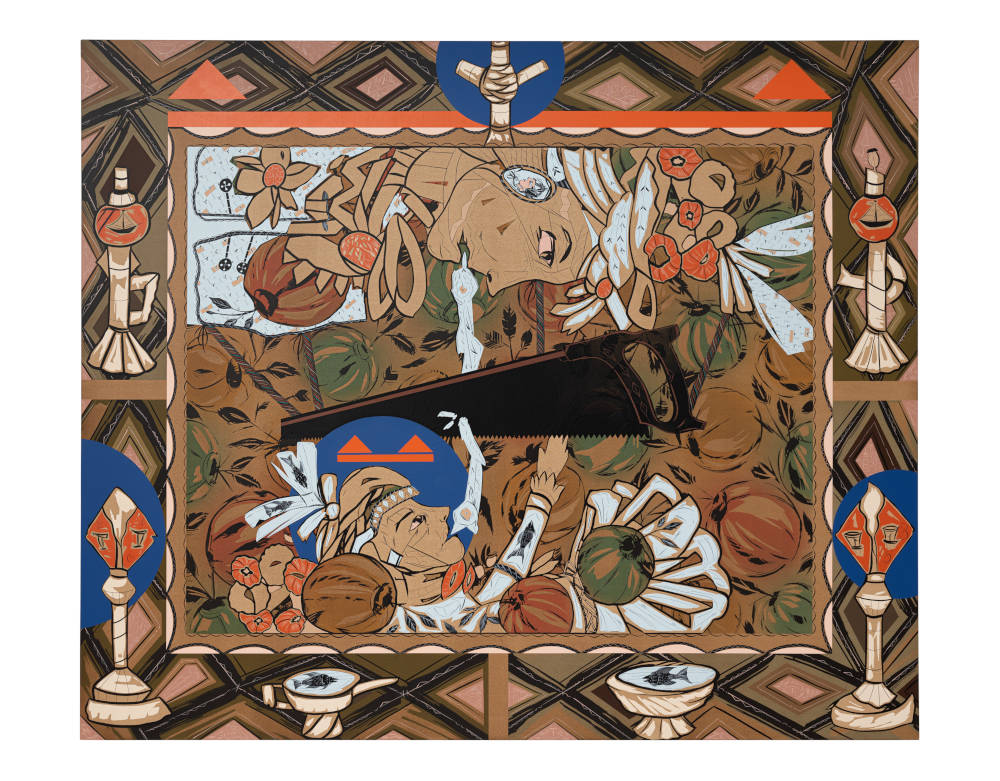 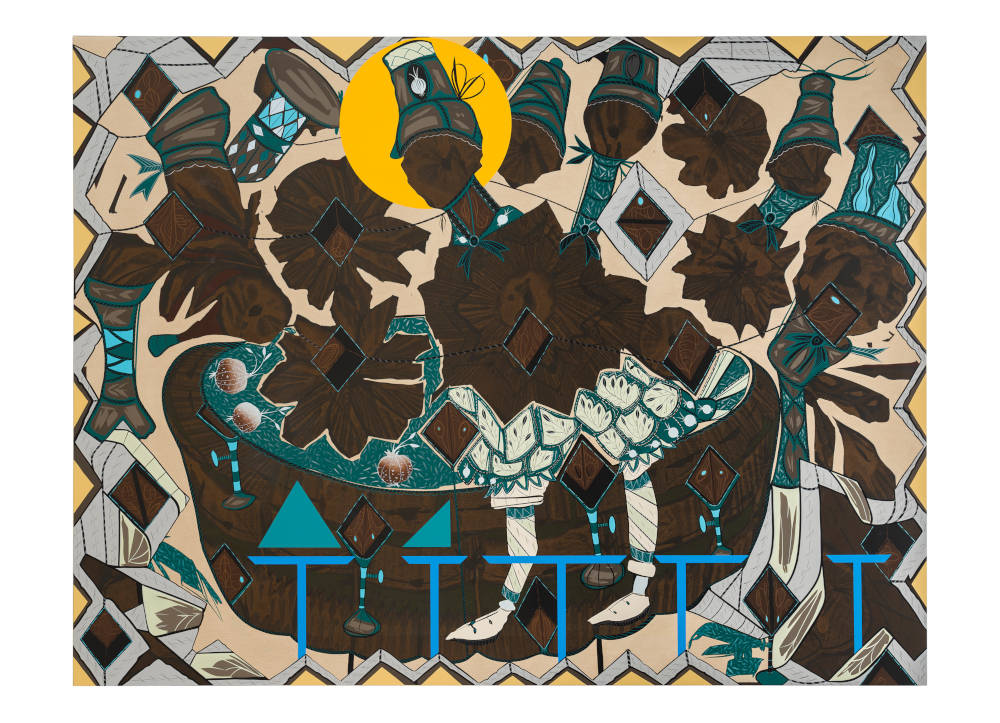 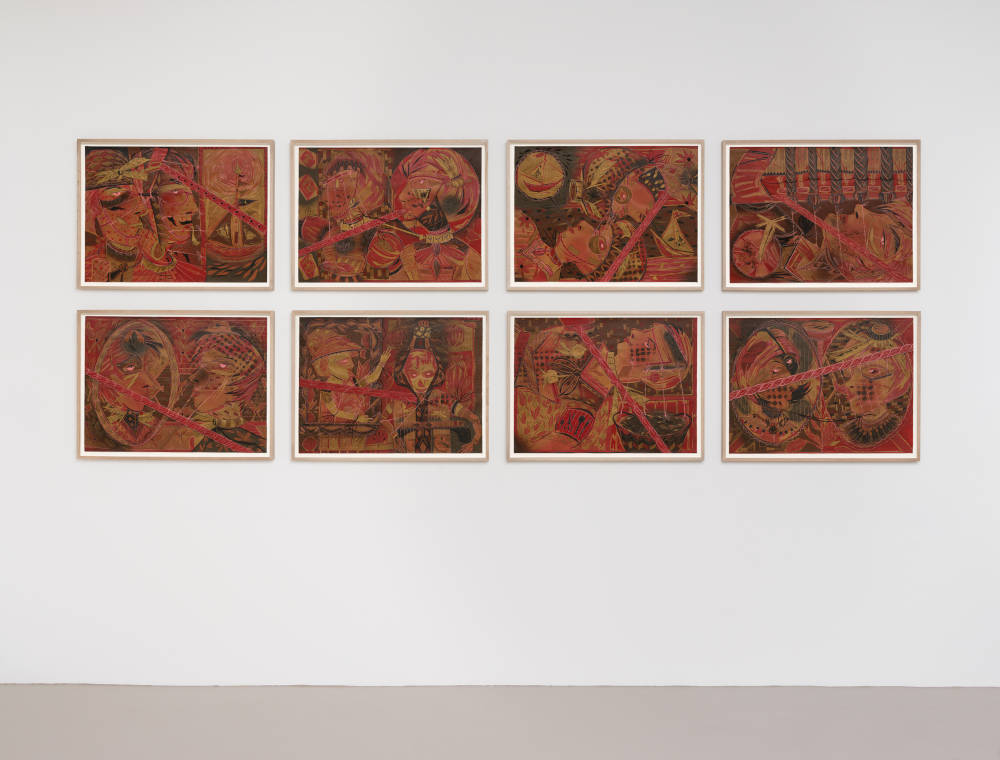 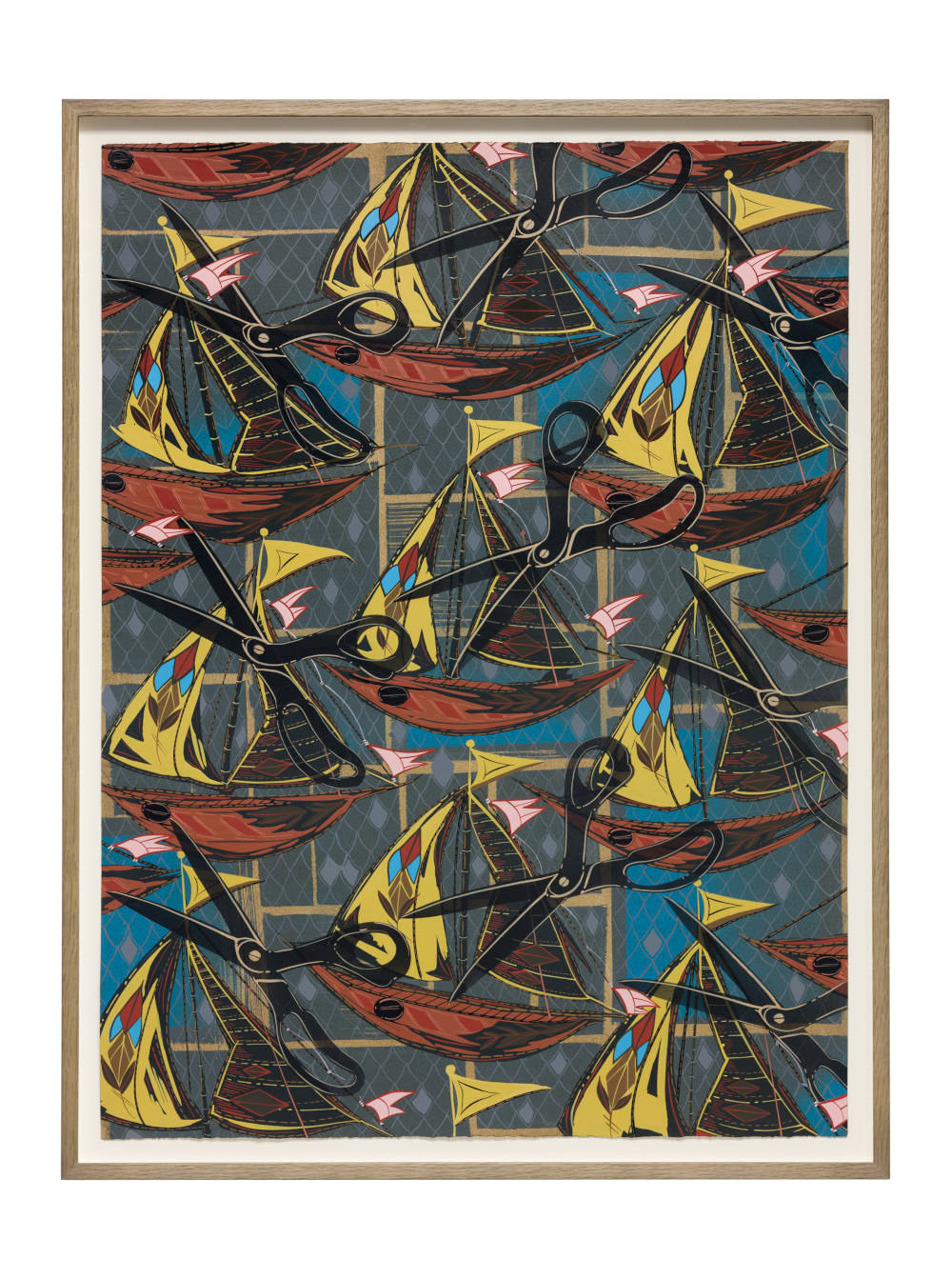 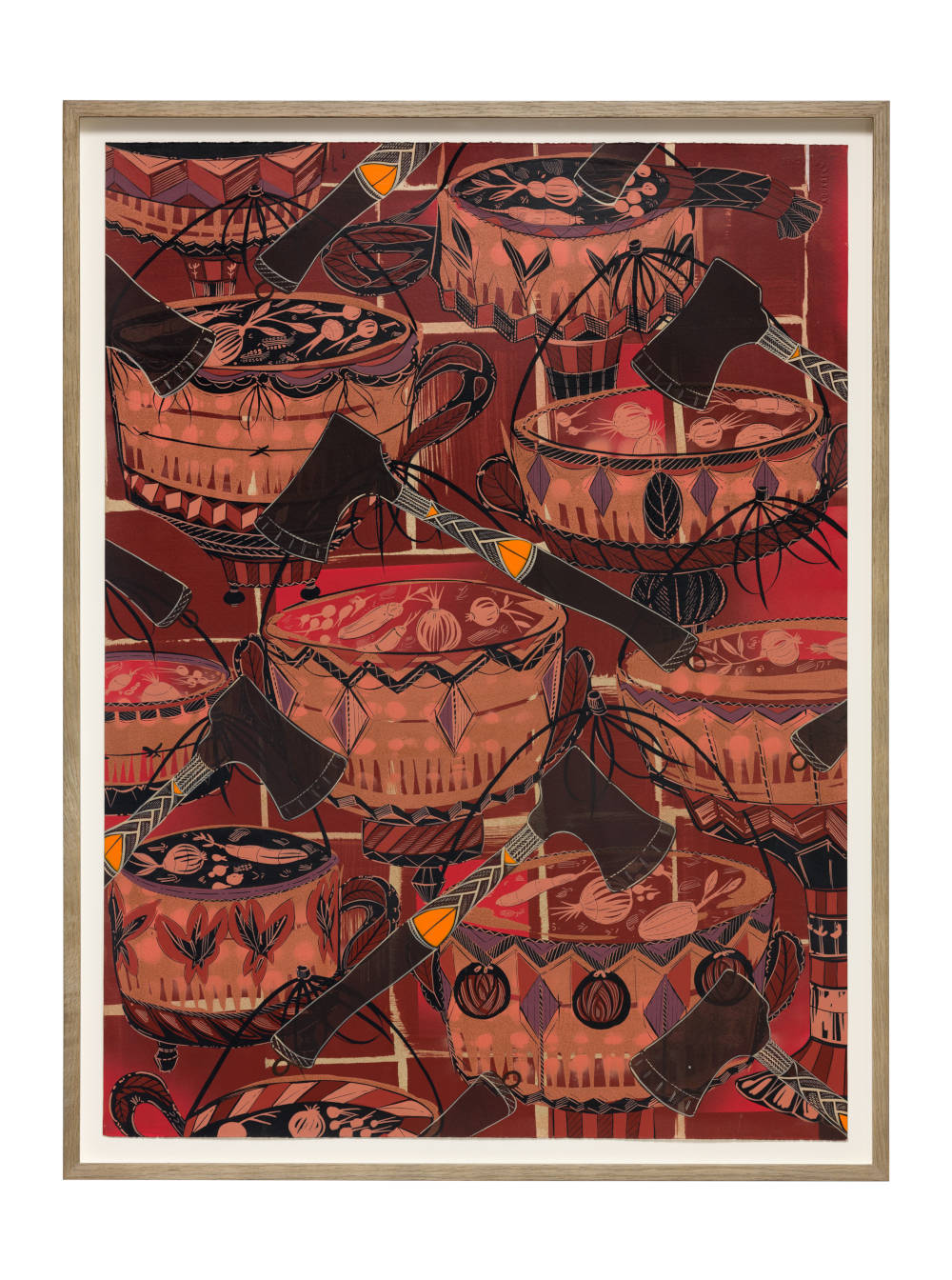 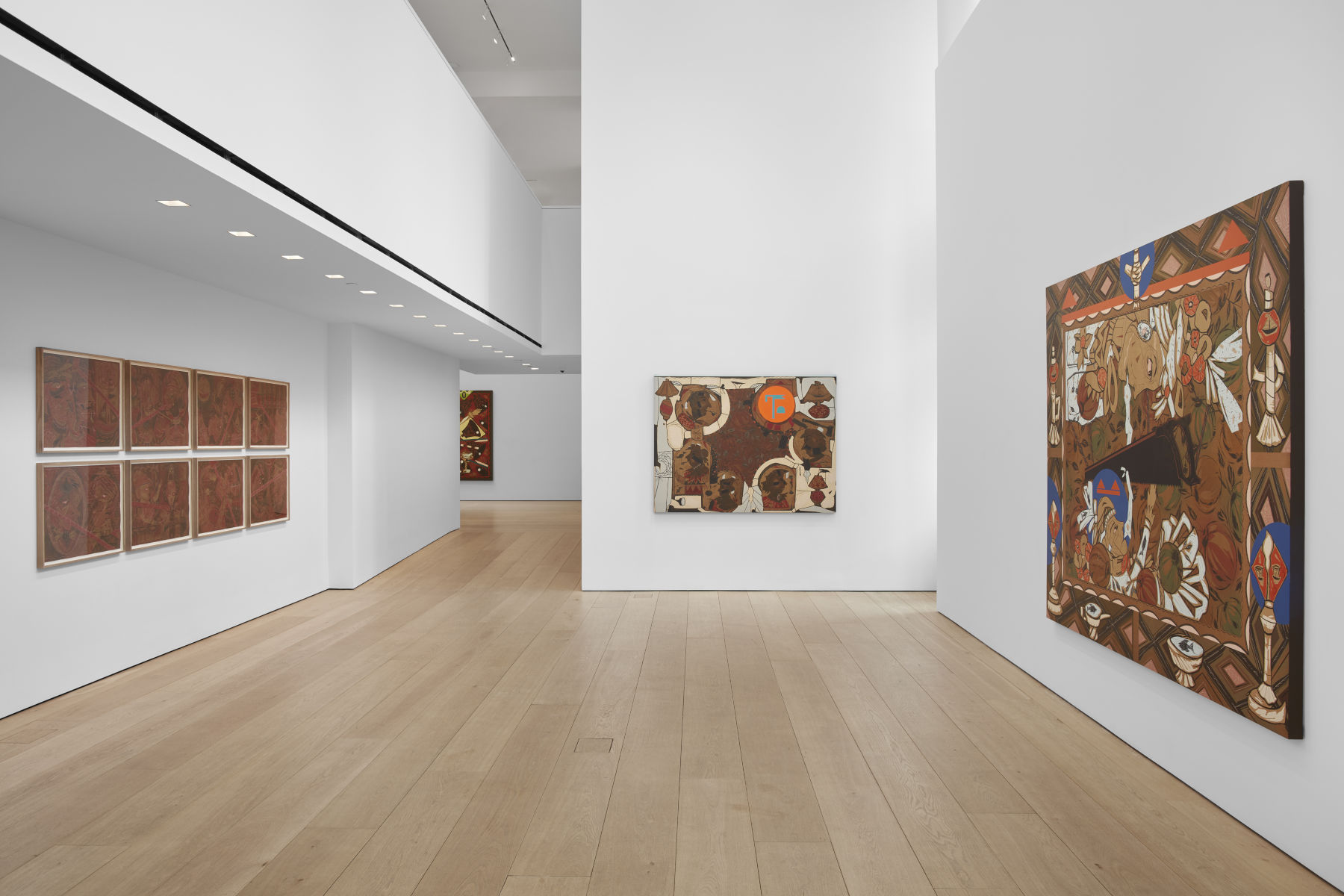 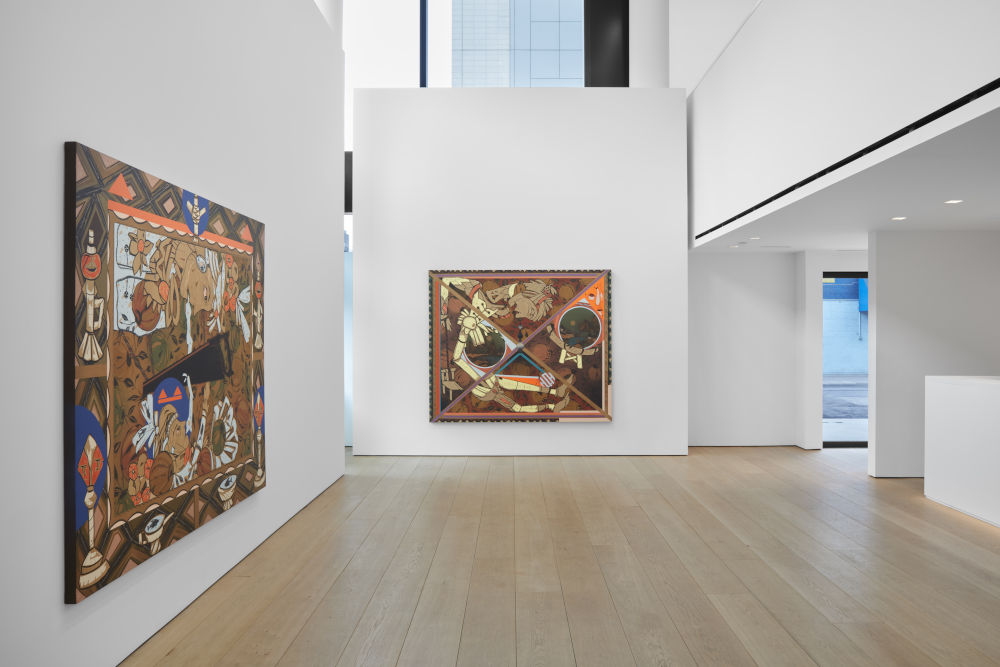 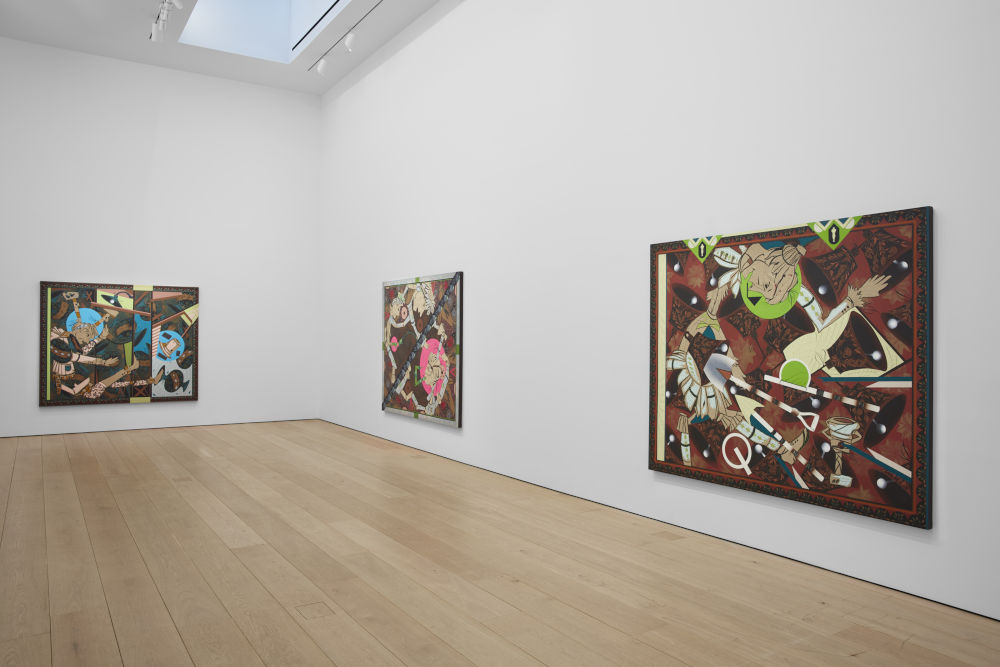 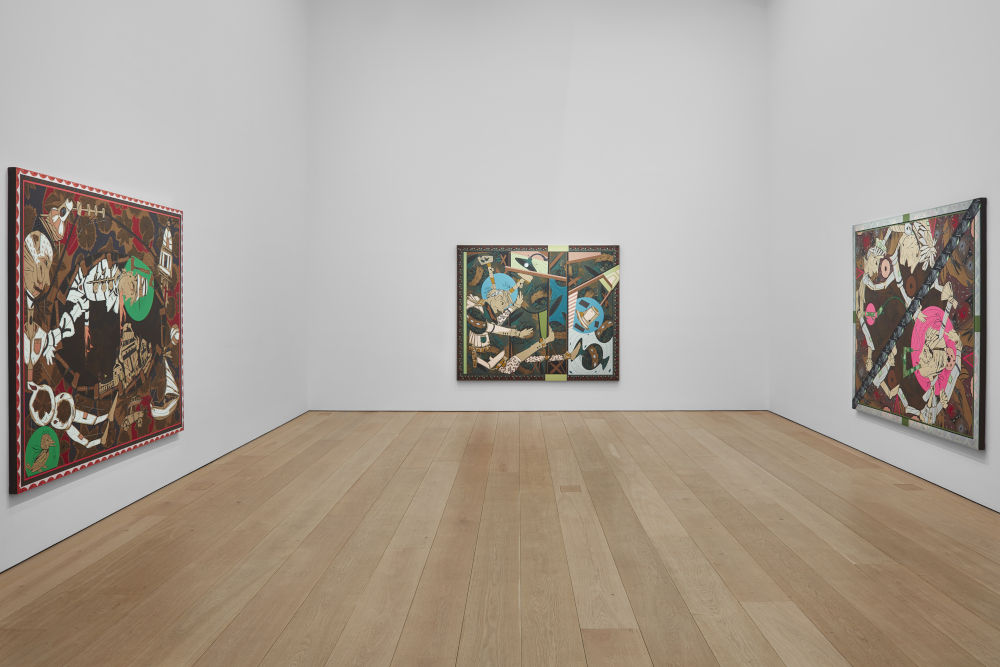 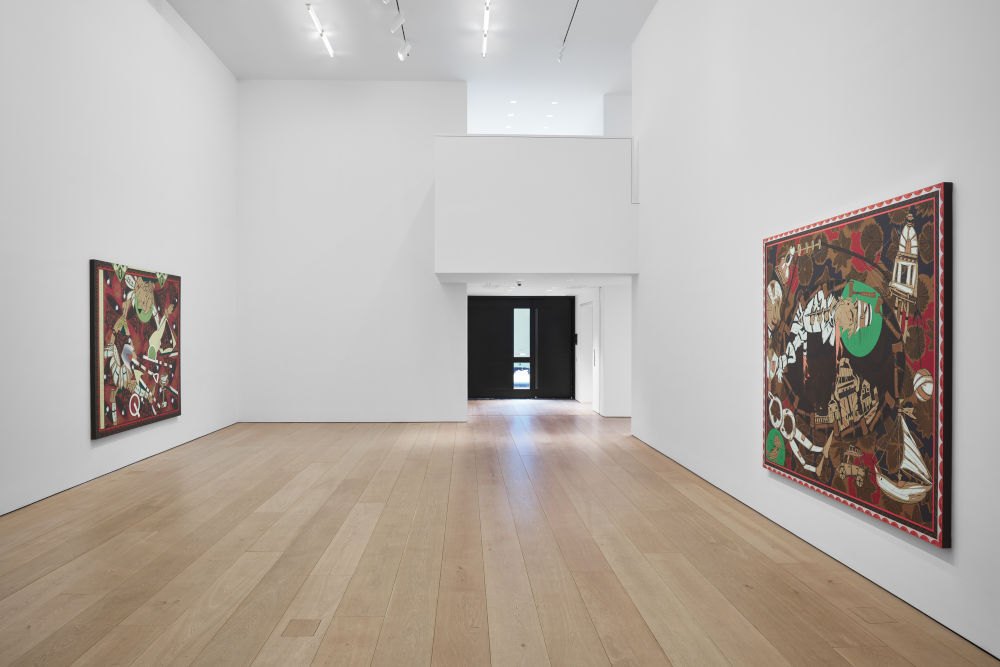 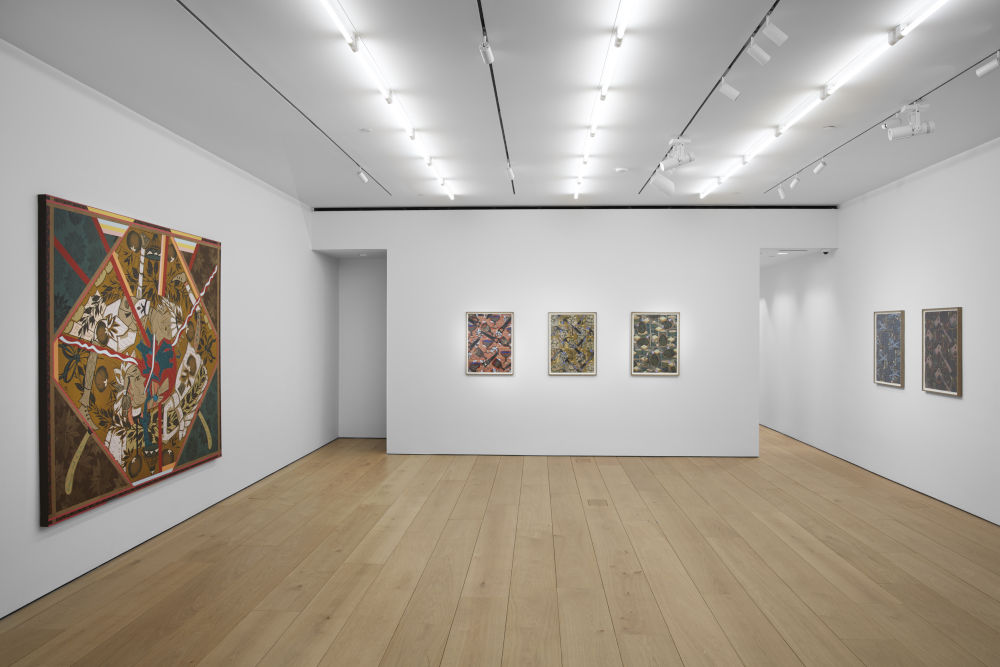 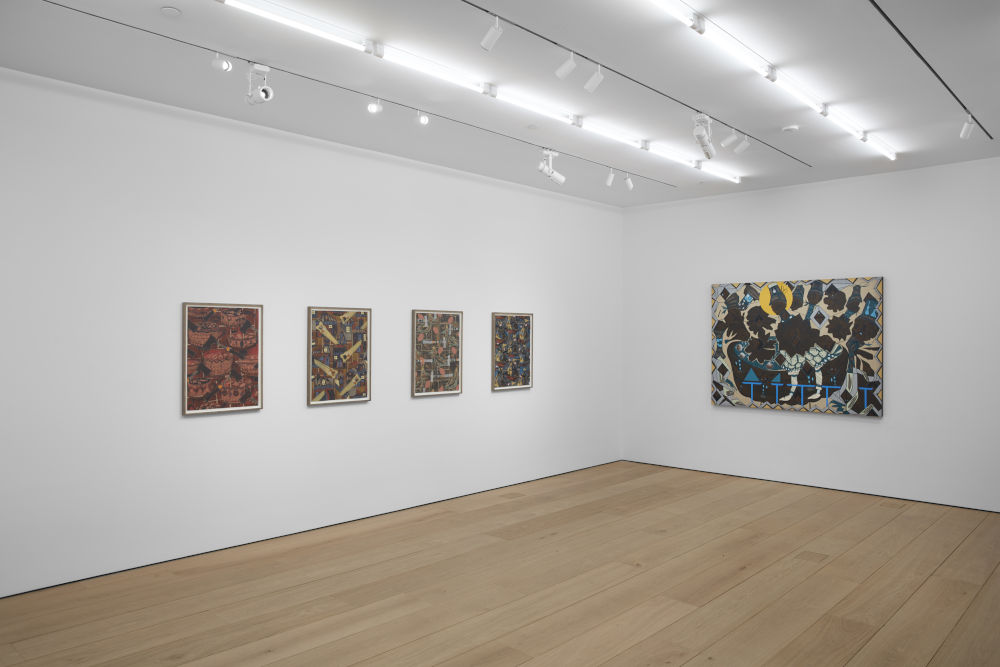 For this body of work, the Los Angeles-based artist presents a series of new paintings and works on paper that combine the genres of landscape, portraiture, and still life. Pittman continues to address the histories of identity, violence, class, and human nature through the polemicized lens of decoration, decor, and the decorative embodied in the memento mori and other forms of commemoration. Pittman is best known for his unique visual aesthetic that has established him as one of the most significant painters of his generation. In this exhibition, he continues his signature, densely-layered painting style that includes a lexicon of signs and symbols, a compilation of varied painting techniques, and a clear homage to the applied and decorative arts.

During the mid-1970s, Pittman attended California Institute of the Arts in Valencia, California, completing a BFA and an MFA. The institute’s strong feminist arts program challenged the devaluation of art forms traditionally associated with craft, and it was his engagement with this program that inspired Pittman’s interest in undermining aesthetic hierarchies and embracing the decorative arts. Pittman’s strong affinity for the decorative can be seen throughout his many bodies of work and it has contributed to his singular visual style. While Pittman’s early works were informed by the socio-political struggle resulting from the AIDS epidemic, racial discord, and LGBTQ+ civil rights struggles that defined the last two decades of the 20th century, his later paintings evince more subtle political gestures through a focus on interior spaces, including domestic and psychological subjects.

The title of the exhibition, Found Buried, relates to ideas of excavation—personal, political, and historical. This alludes both to the way one experiences his work as well as Pittman’s approach to painting. For each work, Pittman builds complexly layered compositions that mediate the tension between color, text, and imagery; figure, landscape, and decoration; and chaos, order, and clarity with remarkable dexterity. He has an innate ability to give each element within a painting equal space and significance. This creates multiple entry points for the viewer, who is invited to do their own excavation of sorts, reading and interpreting the various layers of each work in their own way.

The works in the exhibition feature symbols such as pomegranates (which are often connected to power and imperialism) and tools related to labor and potential violence, as well as decorative objects such as vases, chalices, lamps and an assortment of objets de vertu. Human figures are adorned with theatricalized, imaginary garments and insignia that destabilize expectations of Colonial American, European, and indigenous cultural aesthetics. By merging these seemingly opposing signifiers, Pittman complicates our understanding of colonial identity and its contemporary legacy. In one painting, Pittman portrays a scene comprised of three figures adorned with indigenous headdresses and colonial era garments, fragmented and rendered amidst abstracted patterns of pomegranates and chalices. This painting presents a conceptual reading of violence—self-imposed, physical, and psychological—surrounding oppositional identities, class, and place. In his works on paper, Pittman depicts tools of labor in relation to decorative objects that signify wealth and power. In one work, the image of a hammer is superimposed against a patterned background of chalices, allowing for two seemingly oppositional realities (labor and wealth) to exist simultaneously. Taken together, the works in Found Buried are literally and figuratively a practice in uncovering (i.e. unburying) the codex of signs and symbols Pittman has developed over the course of his career that give unique perspective into past and present political realities.