Lévy Gorvy presents the first Paris solo exhibition for acclaimed Los Angeles-based artist Lari Pittman. Lari Pittman: Dioramas debuts a suite of new paintings that reflect on the continued political and personal resonance of the past. 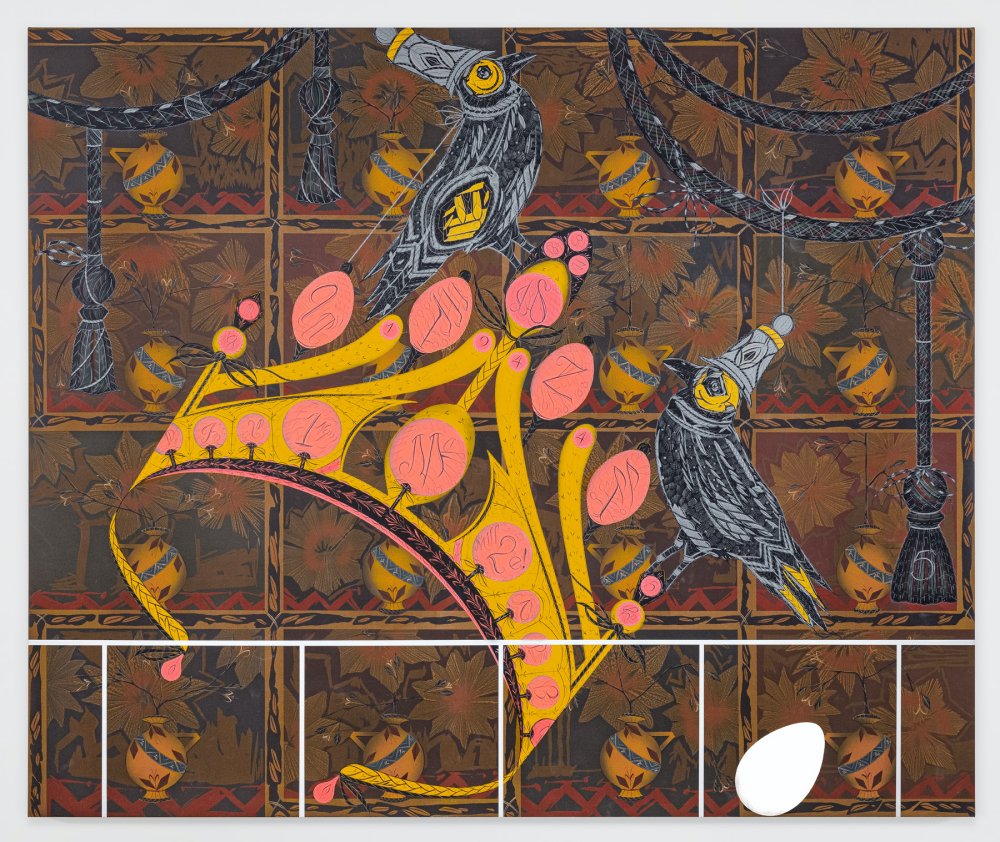 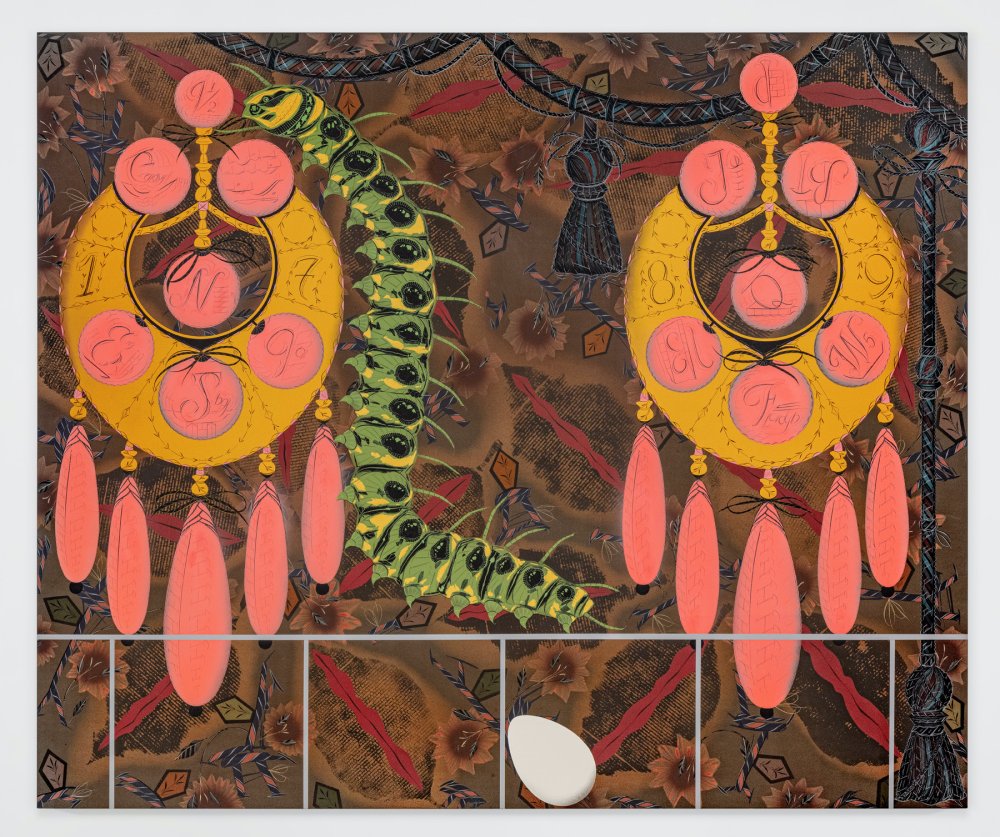 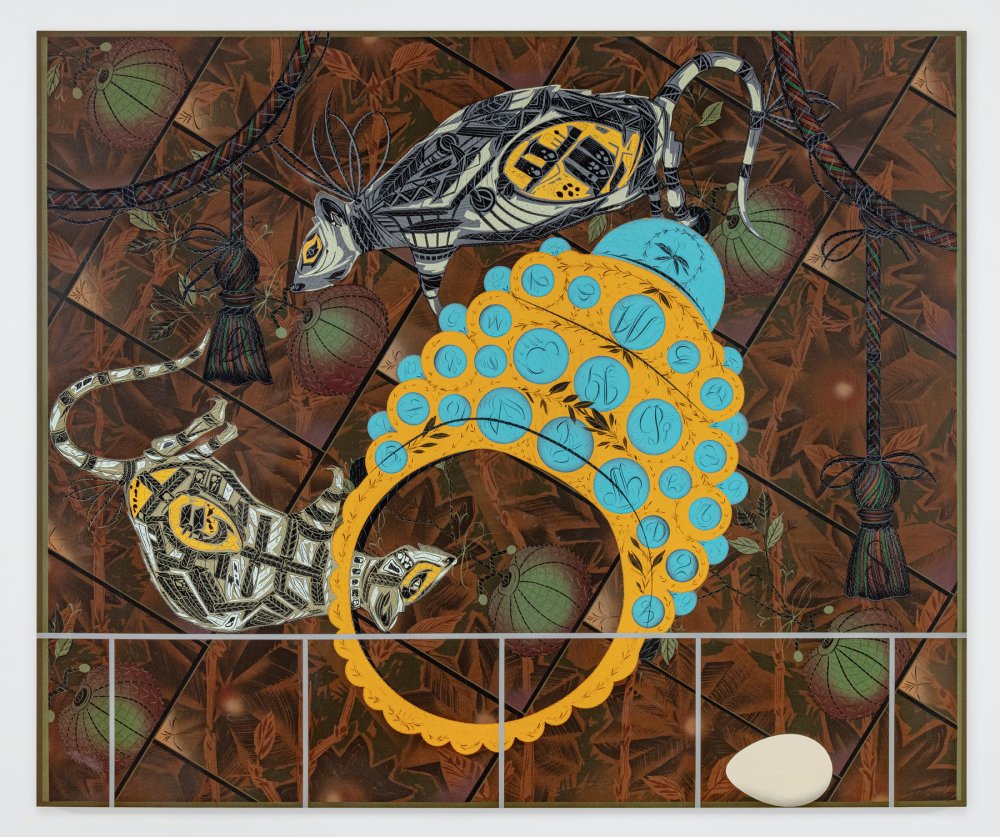 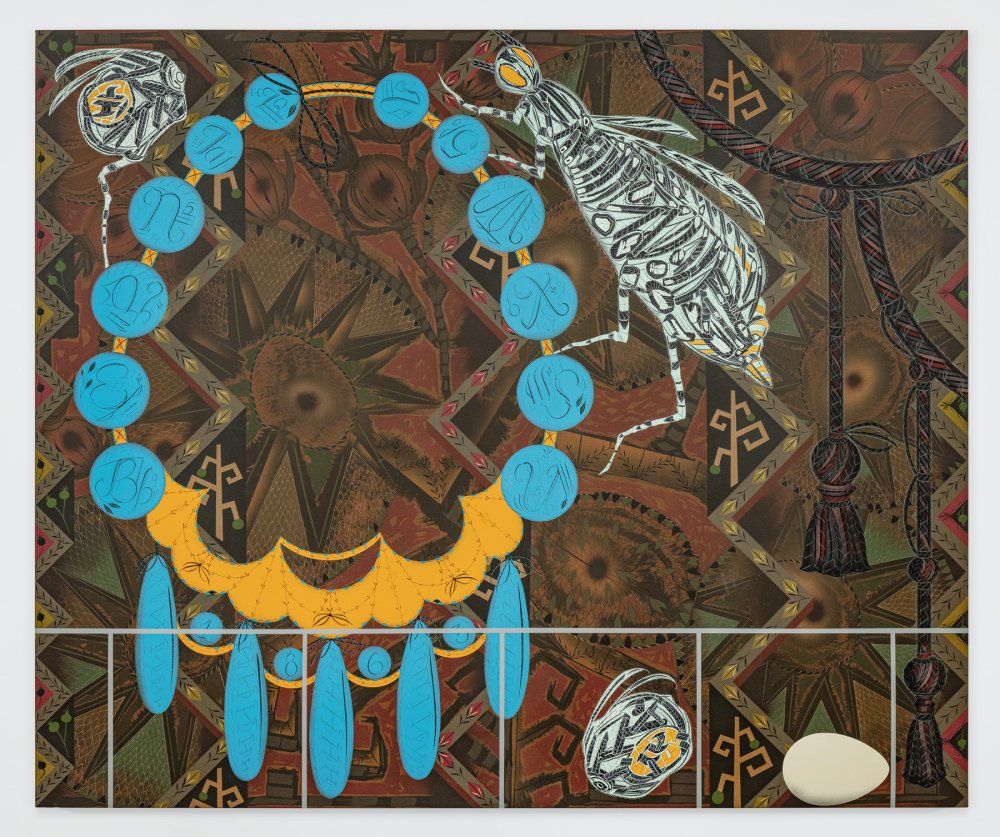 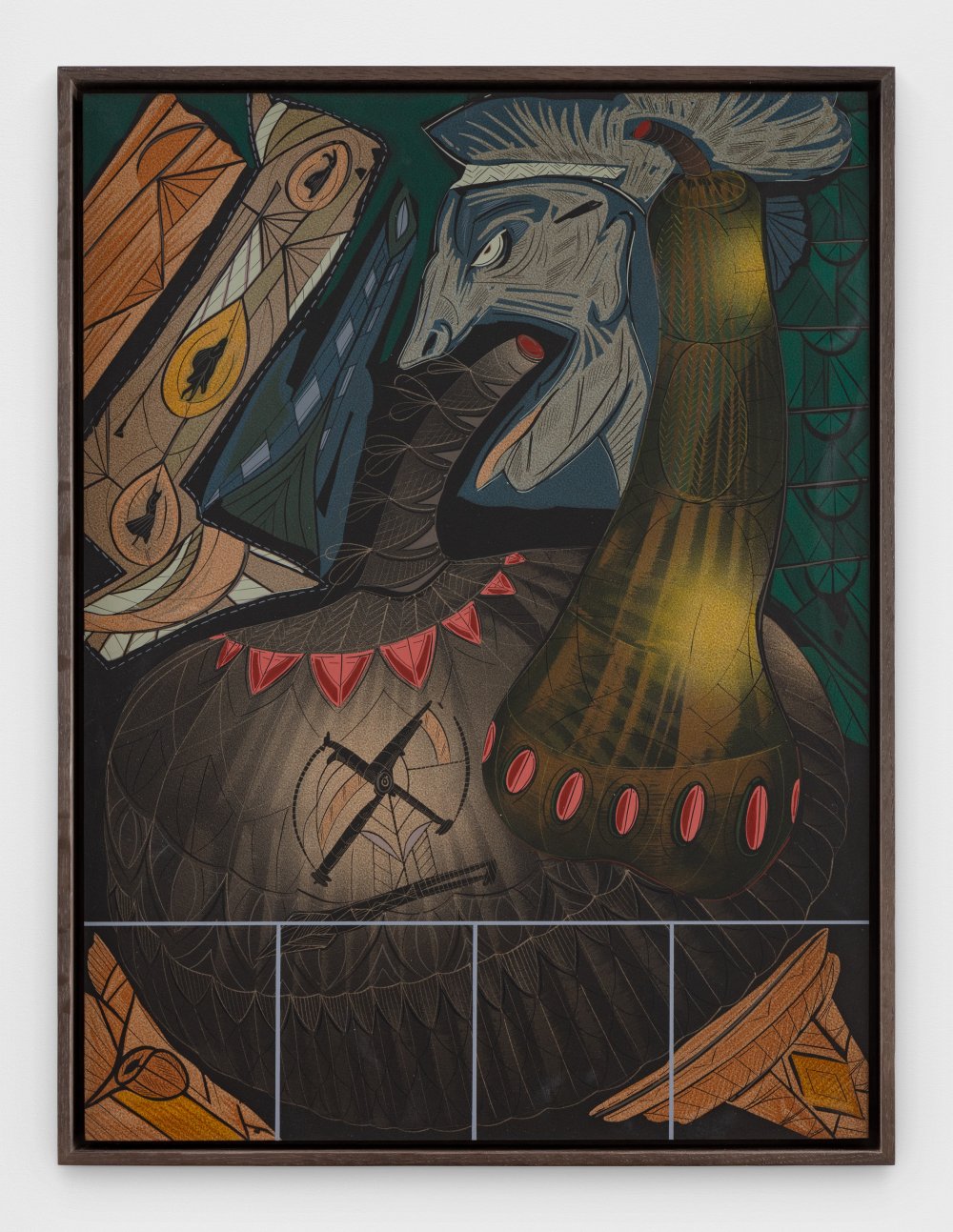 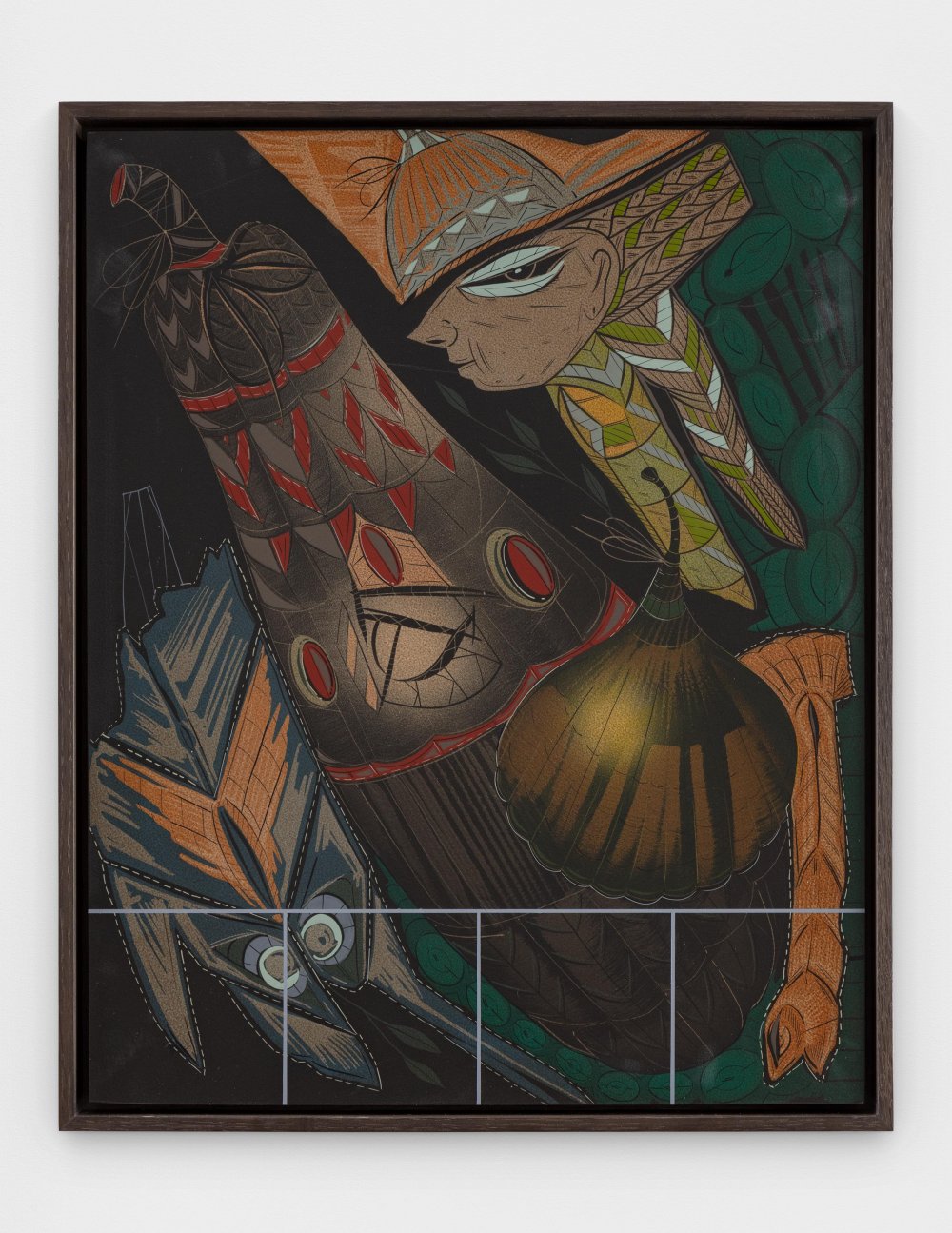 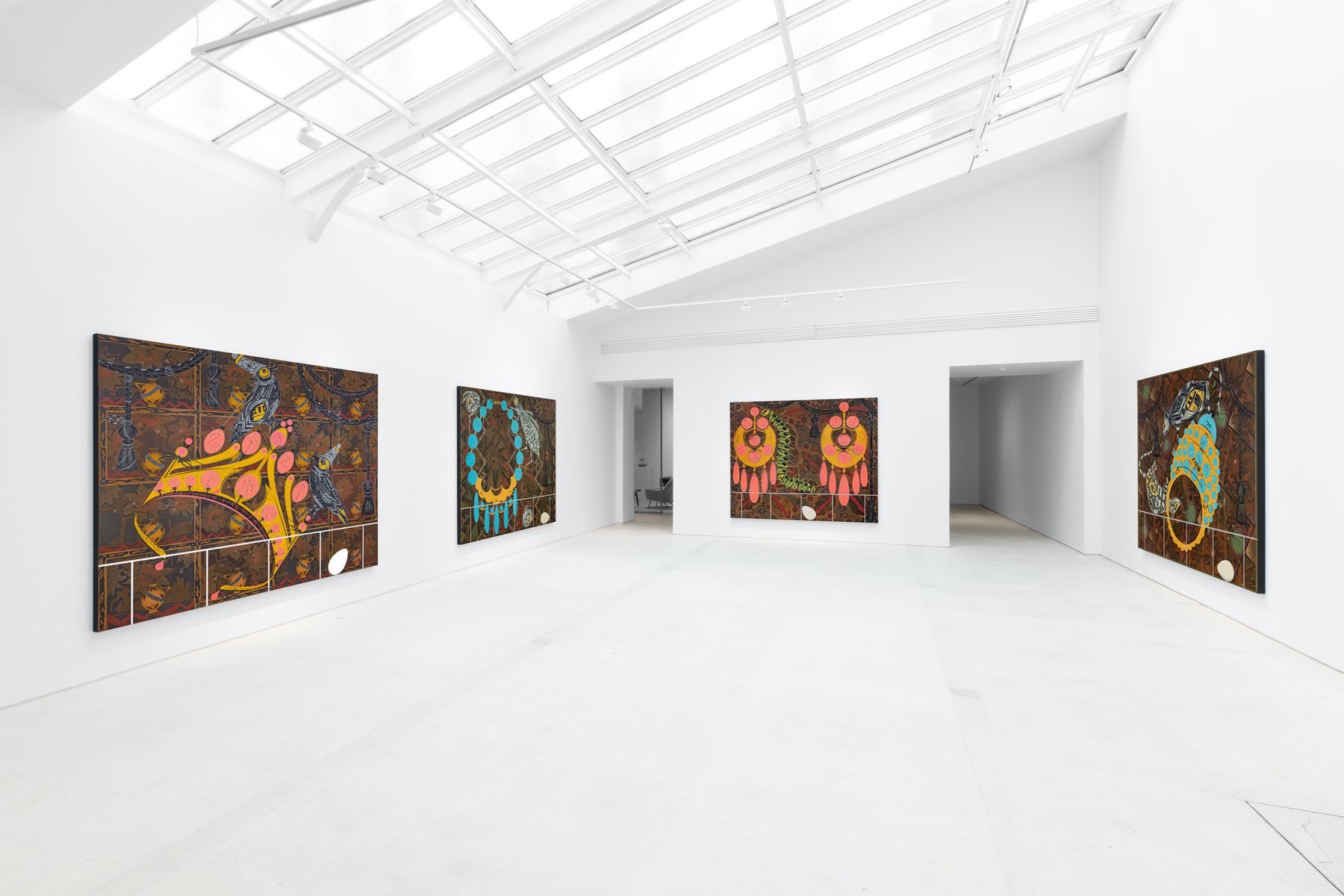 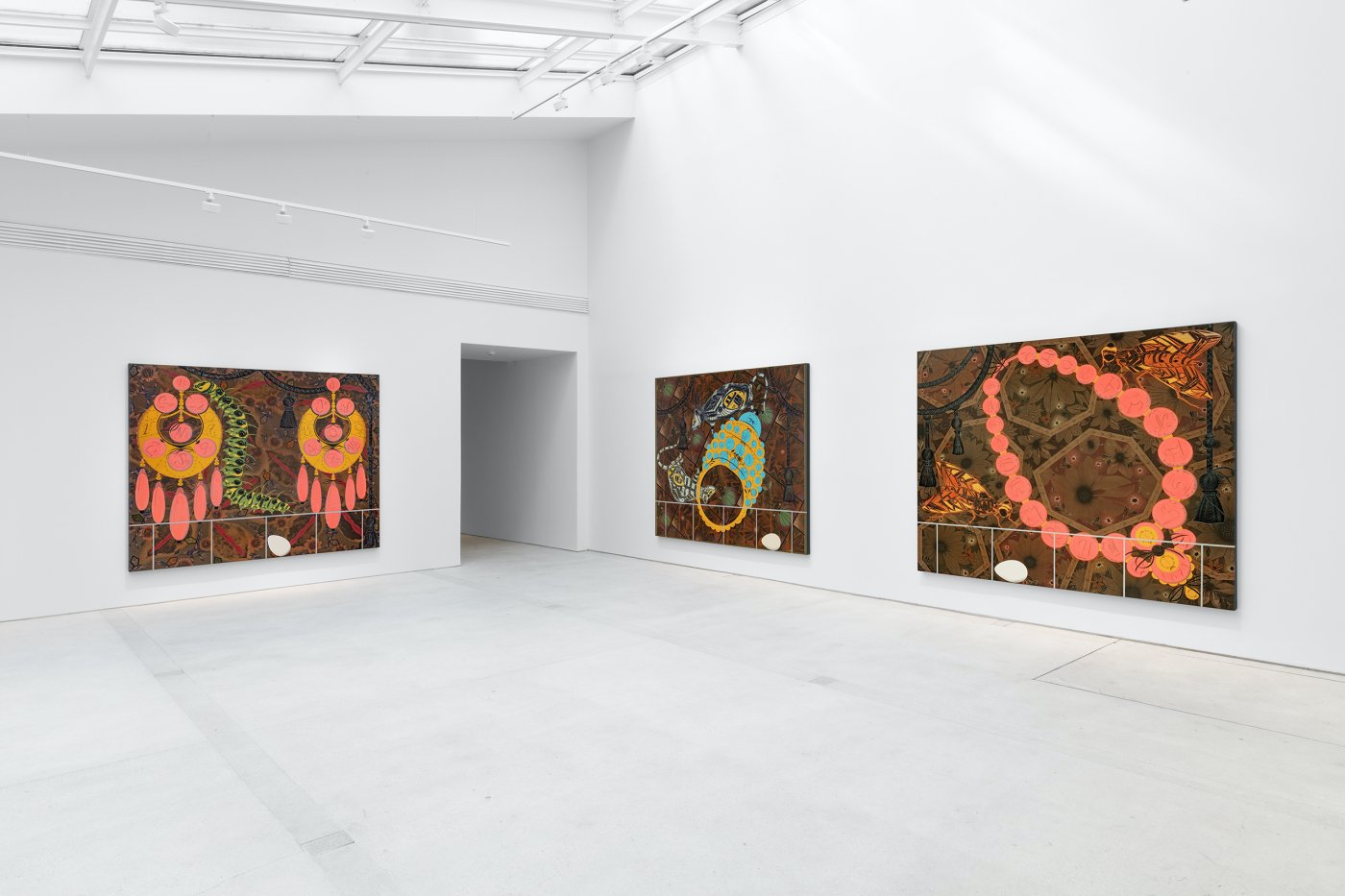 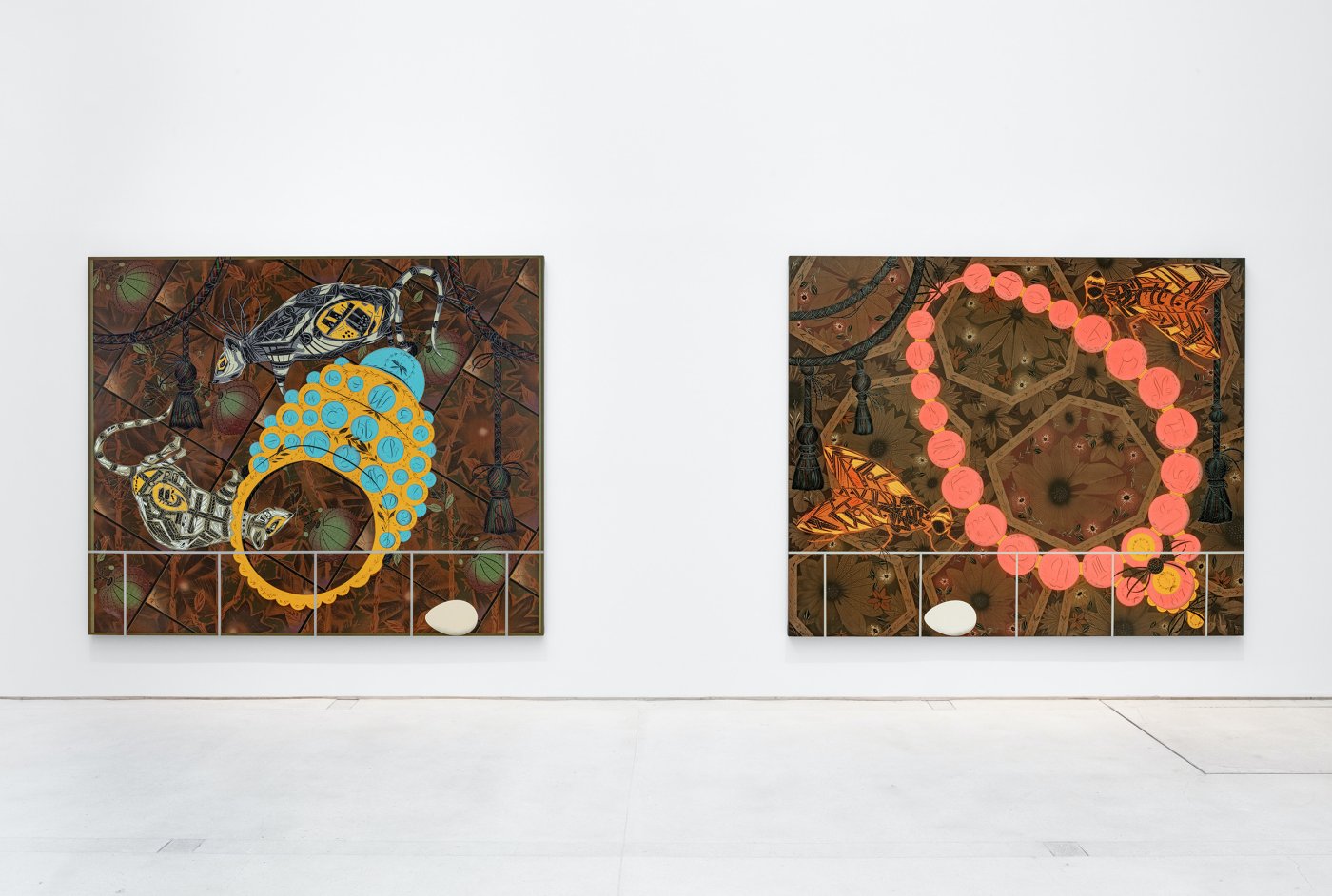 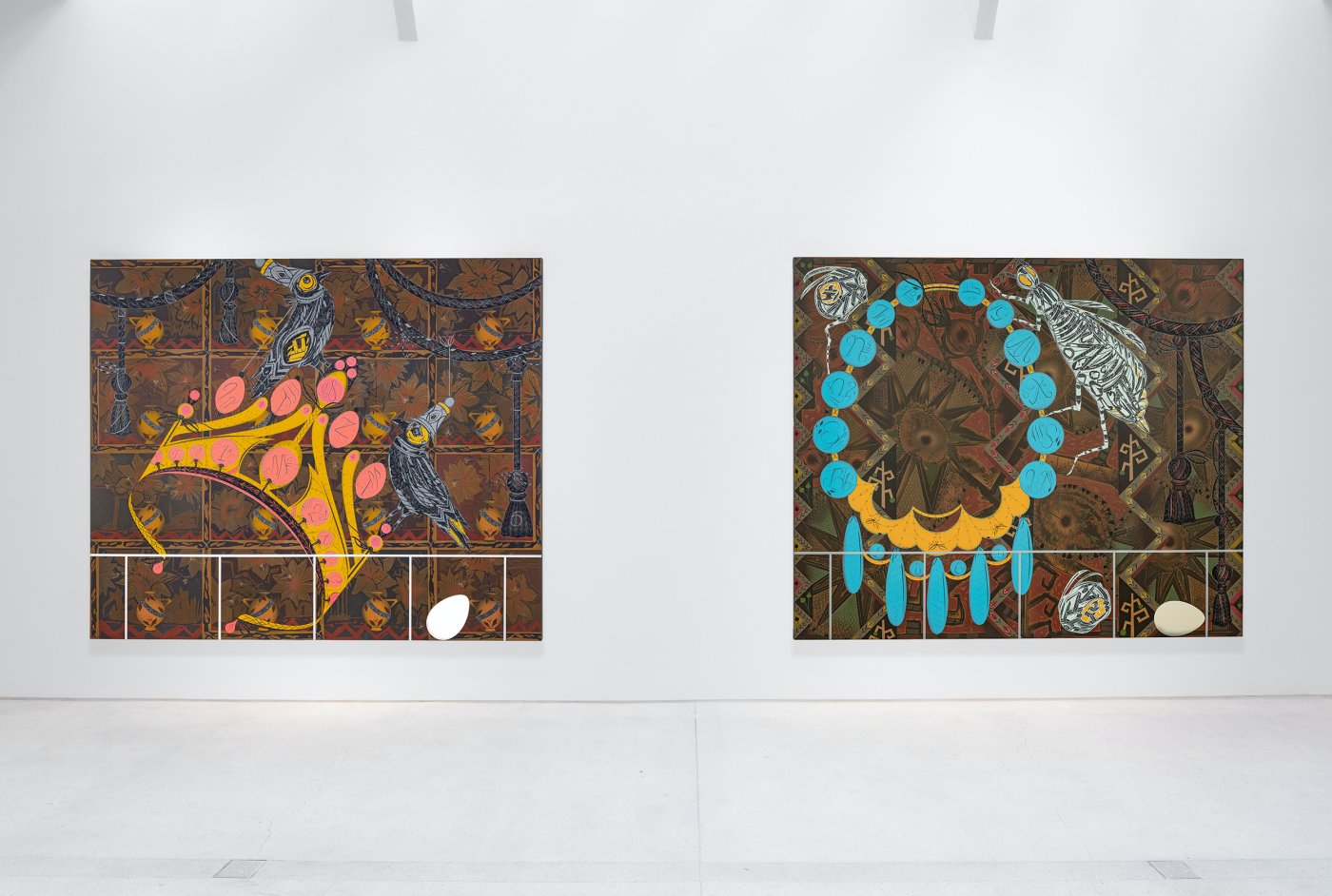 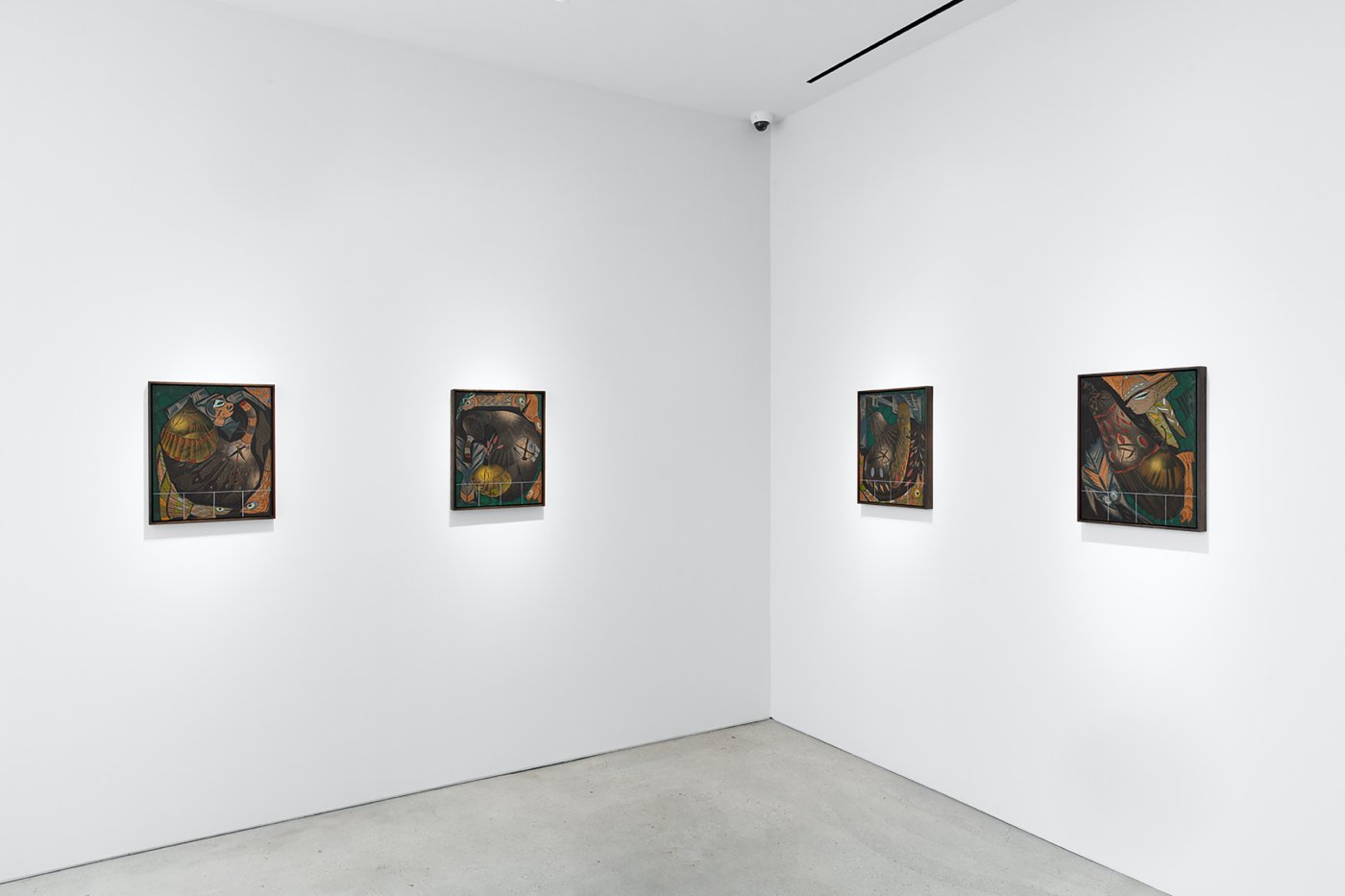 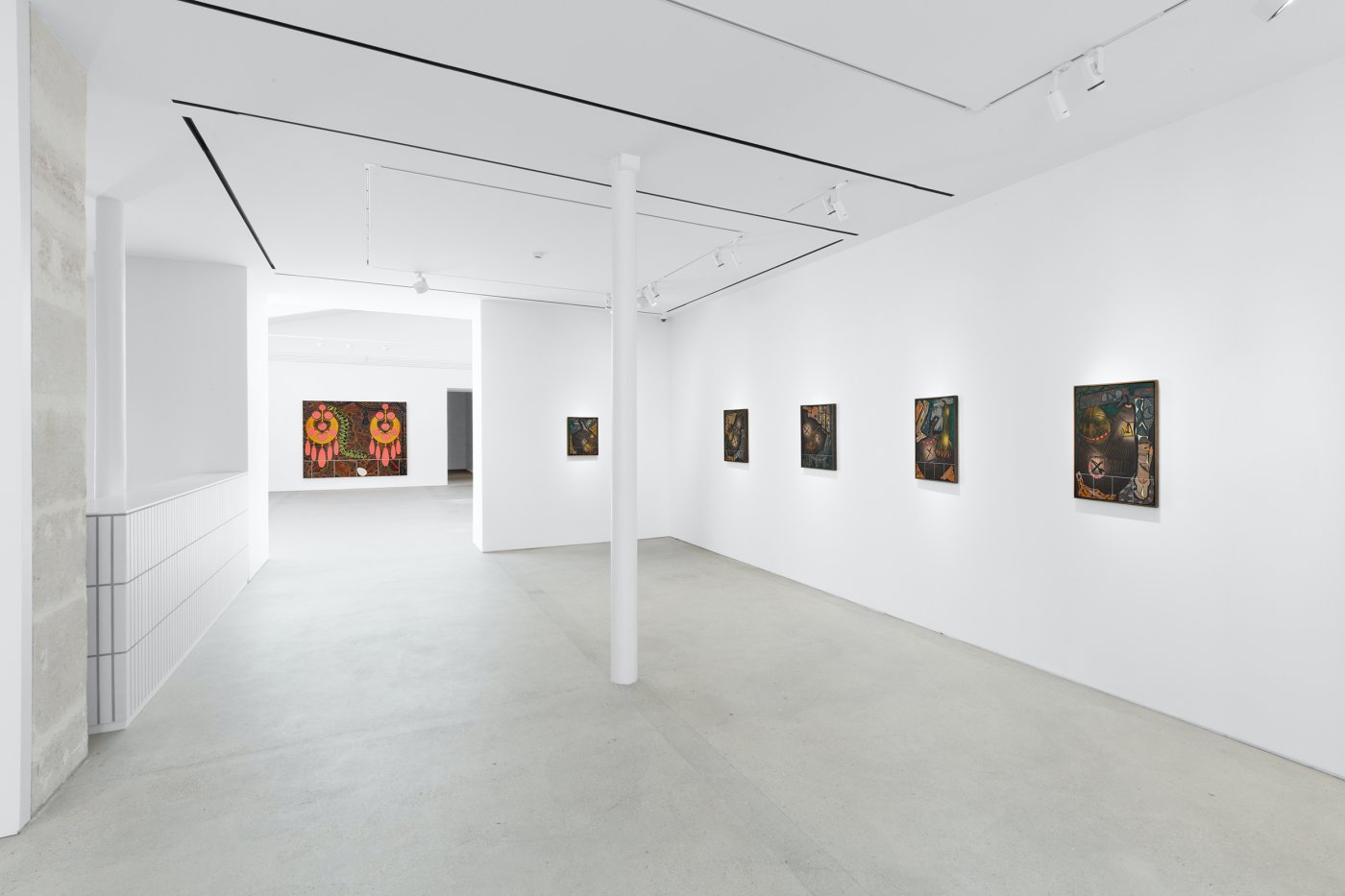 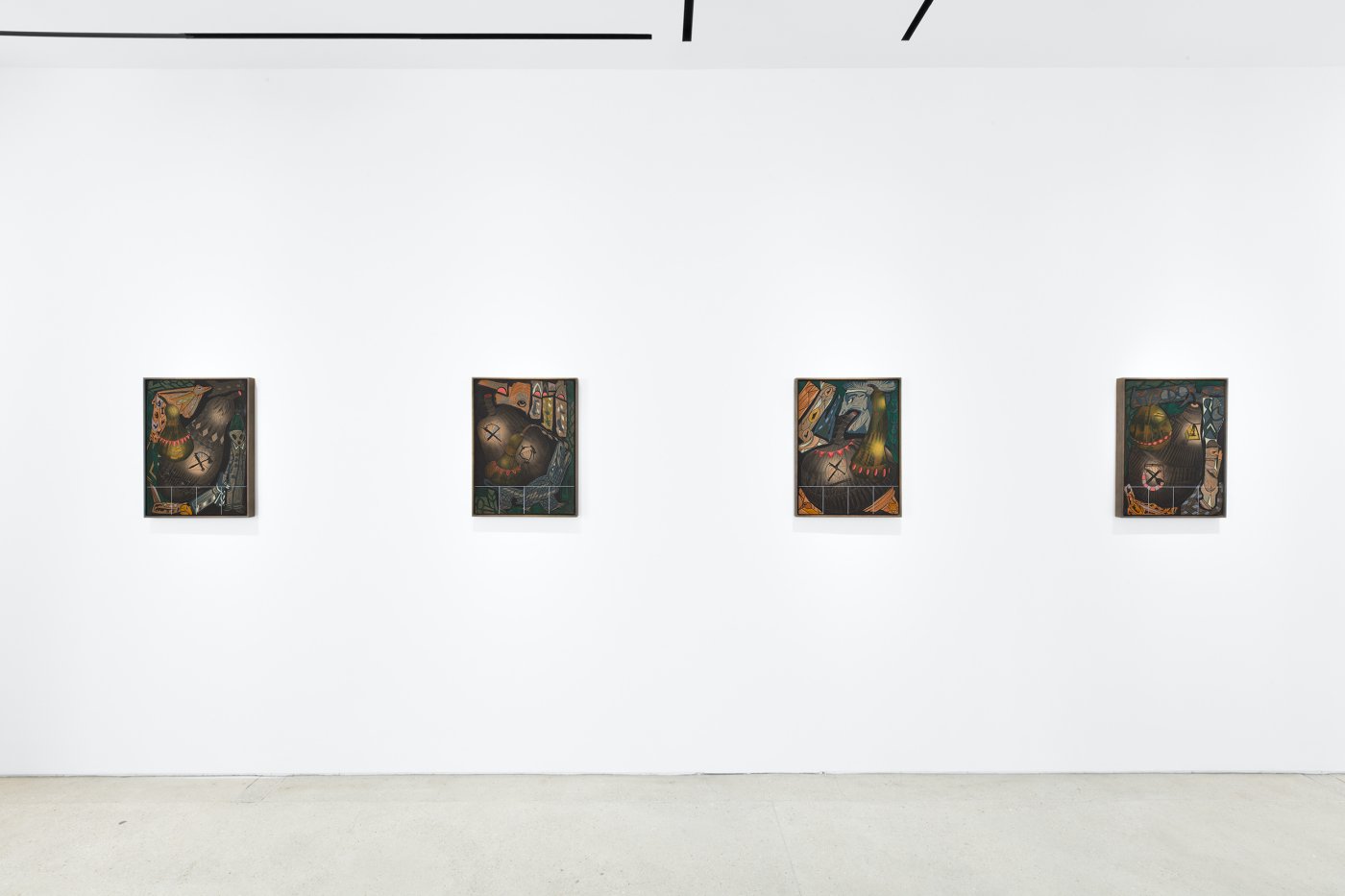 Through a group of large-scale canvases to more intimate works, Pittman draws on the rich history of the decorative arts, yielding optically dazzling compositions of interlocking forms and motifs that are dense with pictorial references and symbolism. The larger body of works in the exhibition explore the linked histories of France and the United States, taking as its central subject a 19th-century parure: an ensemble of jewels meant to be worn together. Rendered in brilliant colors over darker grounds, turquoise and coral items of jewelry are framed by rope garlands and beset by creatures—caterpillars, moths, flies, rats, and ravens—that recall the iconography of Baroque still lifes. Similarly, a group of smaller canvases depict elaborately embellished gourds alongside totemistic animal presences. Pittman’s compositions thus resonate with the vanitas tradition, in which opulent symbols of wealth and beauty are represented alongside animals that devour and destroy, in allegories of the fleeting nature of life and its material seductions.

The ornate surfaces of the works in Dioramas are unified by Pittman’s imposition of painted rectilinear bars on the lower half of each painting, emphasizing their flatness and creating a visual and conceptual barrier between the canvases and the viewer’s space. With these railings, Pittman conspicuously invokes the titular notion of a diorama—a conceit long used by museums to display historical artifacts in vignettes that suggest preconceived narratives. Like the tableaux of such dioramas, Pittman’s paintings establish a formal relationship with the viewer, arranging and reconstituting historical allusions and fragments for the present day. The jewelry, for example, is inscribed with dates of important milestones in the national histories of the United States and France: 1776, 1789, 1863, 1871, and 1944. These years mark the Declaration of Independence, the French Revolution, the Emancipation Proclamation, the Paris Commune, and the Liberation of Paris—moments of both violence and liberation. Eschewing literal illustration of these landmark political events in favor of decorative analogs comprised of gorgeous fragments, Pittman’s dioramas operate as contemporary history paintings, reflecting on the opulence and traumas of the past in order to invite contemplation on the complex opportunities and risks of the present day.

Pittman emerged as an artist while attending the California Institute of the Arts (CalArts) in the mid-1970s. Deciding to be a painter instead of following the conceptual direction then predominant in Southern California, he found his intellectual grounding through the Feminist Art Program at CalArts, mentored by such prominent figures as art historian Arlene Raven and artists Vija Celmins, Elizabeth Murray, and Miriam Schapiro. Facing prejudice as a gay man with Latin American ancestry, Pittman has built an artistic practice informed by feminist concerns with gender and identity, and sustained by an interest in marginalized decorative arts traditions. The artist has asserted these influences within his work, and they course through his art with tremendous intensity, expressed in a bravura approach to color, form, meaning, and references from the quotidian to the outré. As critic David Pagel has observed, “Pittman’s operatic pictures propose that the world’s complexity does not override passion, sincerity, and individuality.”

About the Artist
Based in Los Angeles, Lari Pittman (born 1952) serves as Distinguished Professor Emeritus of Painting and Drawing at University of California Los Angeles. His work has been featured in the Whitney Biennial (1987, 1993, 1995, 1997); Documenta (1997), and the Venice Biennale (2003). A mid-career survey of Pittman’s art was organized in 1996 by the Los Angeles County Museum of Art and traveled to the Contemporary Arts Museum Houston and the Corcoran Gallery of Art, Washington D.C. In 2019, the Hammer Museum in Los Angeles presented a retrospective of his work. Art by Pittman is in the collections of major public institutions, including the Art Institute of Chicago; Astrup Fearnley Museet, Oslo; The Broad, Los Angeles; Hammer Museum, Los Angeles; Los Angeles County Museum of Art; Museum of Contemporary Art, Los Angeles; Museum of Modern Art, New York; National Gallery of Art, Washington, DC; Sammlung Goetz, Munich; and Whitney Museum of American Art, New York.