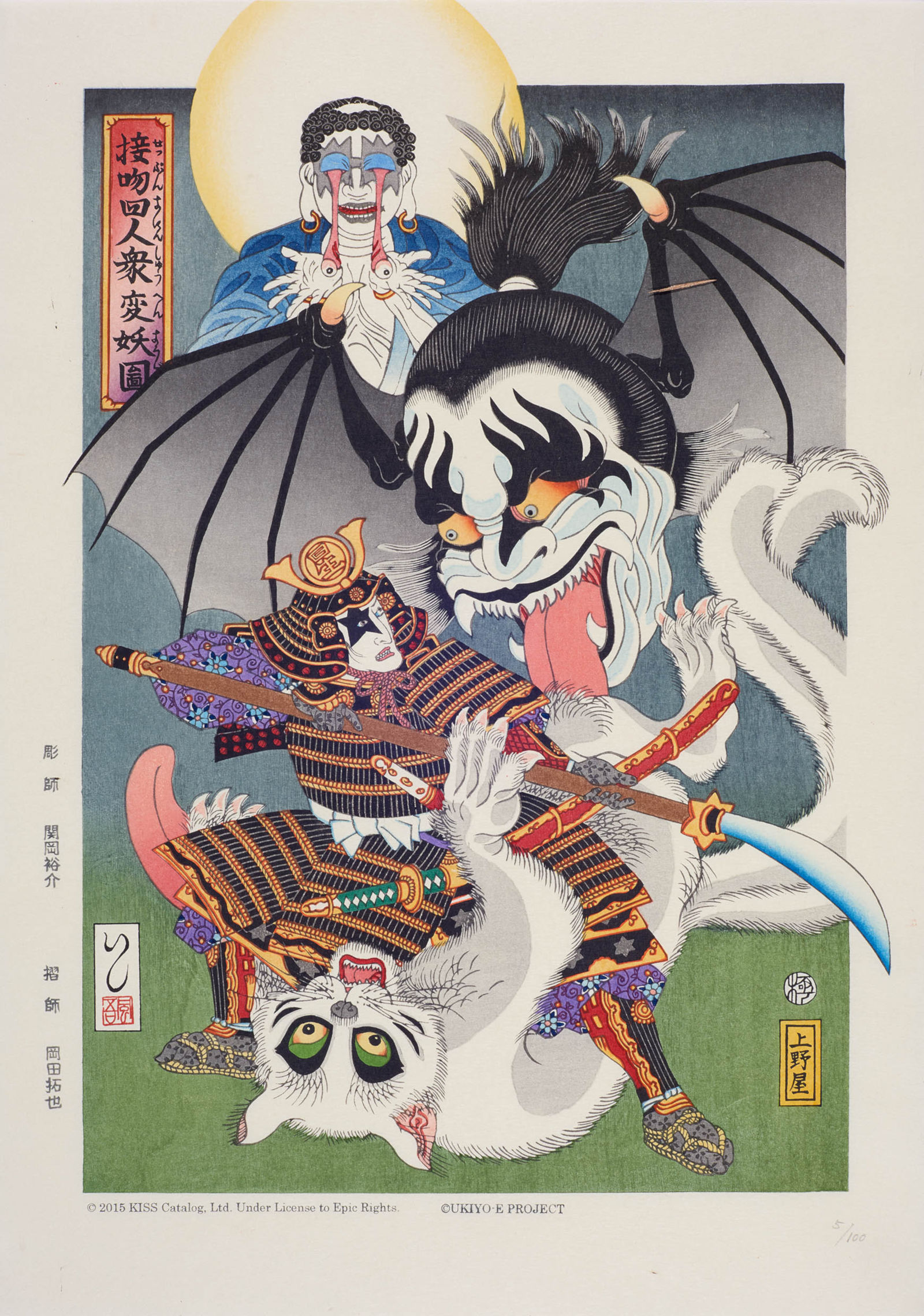 Utagawa Kuniyoshi is renowned as one of Japan’s great artists of the nineteenth century. Manga and Anime are practically inconceivable without his visual imagery. He produced artistic and technically ground-breaking prints that were very popular with the general public.

To celebrate the 150th anniversary of Austrian-Japanese friendship, the MAK is holding an exhibition on the Japanese ukiyo-e designer Kuniyoshi and his artistic and cultural milieu.

Utagawa Kuniyoshi (1797–1861) could be counted as one of the central figures in the history of Japanese color woodcut prints towards the end of the Edo Period (1603–1868). Together with the leading publishers of his era and with other artists of the Utagawa School, including Utagawa Hiroshige (1797–1858) and Utagawa Kunisada I (1786–1864), he created prints that are artistically and technically ground-breaking and yet very popular among the broad-based public. As a designer of commercial products he was always scouting for fresh impulses and new themes, and a new visual vocabulary. Besides single sheets and series, often produced in close cooperation with the entertainment industry, he interwove into his works cutting and cynical criticism of the upper-class establishment, which endeavored to prevent social change through tougher censorship and restrictions.

Many exhibitions on Kuniyoshi and his era have taken place across the globe in recent years, mainly focusing on political critique and humoristic narratives, also “tales of heroes.” Significantly, these are the very themes that are only sparsely represented in the extensive MAK Asia Collection.

The MAK houses color woodcuts by Kuniyoshi and his contemporaries that in their profile and compilation are unique across the world. The collection of Japanese color woodblock prints from the late Edo Period was compiled for the most part around 1900; here, two collector personalities must be singled out: Heinrich Siebold (1852–1908), whose collection found its way between 1892 and 1905 into the Viennese collections of Asian art, and Richard Lieben (1842–1919), from whose estate an extensive and superlative ukiyo-e collection was bequeathed to the MAK.

Therefore this exhibition in the anniversary year is a wonderfully fitting opportunity to show Kuniyoshi’s works in the way that only such collections with their historically compiled holdings are capable of and therefore, in addition, to provide insight into the strategy of European ukiyo-e collectors in Vienna around 1900. In a total of eight sections, the exhibition KUNIYOSHI + positions his work in the center of the Utagawa school: innovations in content and aesthetics make Kuniyoshi’s oeuvre act as a mirror reflecting the great political and social changes in Japan in the nineteenth century.

The significance given today to the fascinating world of the woodblock print (ukiyo-e) is impressively showcased in the works of Masumi Ishikawa and Megumi Ōishi (UKIYO-E PROJECT) and the graphic designer Andrew Archer. Both resort to the typical visual elements and techniques of the Japanese woodblock print, nevertheless, the dominant subjects of their works include such contemporary themes as music and sport.
The exhibition UKIYOENOW: Tradition and Experiment shows contemporary approaches to the traditional color woodcut and poses the question of how far the different production forms—traditional handicraft and digital print—are affecting the further development of the ukiyo-e.

This will be the first presentation in Europe of works by Masumi Ishikawa (b. 1978 in Tokyo) and Megumi Ōishi and the graphic designer Andrew Archer (b. in Auckland), which translate motifs from pop culture and sport into the aesthetic of the ukiyo-e. Both artists stand for the renewal of the idiom and visual imagery of the Edo Period (1603–1868) and are trailblazers for the globalization of Japanese art.

While theme, style and technique of the ukiyo-e were specifically Japanese until the twentieth century, a hundred years later an artistic language evolved out of it that has served artists throughout the world. Ishikawa, Ōishi and Archer borrow from the typical visual elements and techniques of the Japanese color woodcut, but their subjects are contemporary phenomena from the global world of entertainment: music and sport.

With the aim of reviving the ukiyo-e, in 2014 the Ukiyo-e Project was founded, which interprets new motifs using traditional production techniques. In the MAK exhibition UKIYOENOW the elaborately designed prints are on show for the first time in their entirety outside Japan.

In contrast to traditional production methods in the Ukiyo-e Project, Andrew Archer’s works are produced digitally. The graphic designer, who lives in Melbourne, combines his passion for basketball and ukiyo-e in his most extensive series yet, EDO-BALL, in publication since 2013. This dynamic picture series produced in high-quality digital print follows Kuniyoshi and his pupil Yoshitoshi in style and spellbinds viewers with its individual wit and humor.