The flower bloomed and faded. The sun rose and sank. The lover loved and went. And what the poets said in rhyme, the young translated into practice.
– Virginia Woolf, Orlando 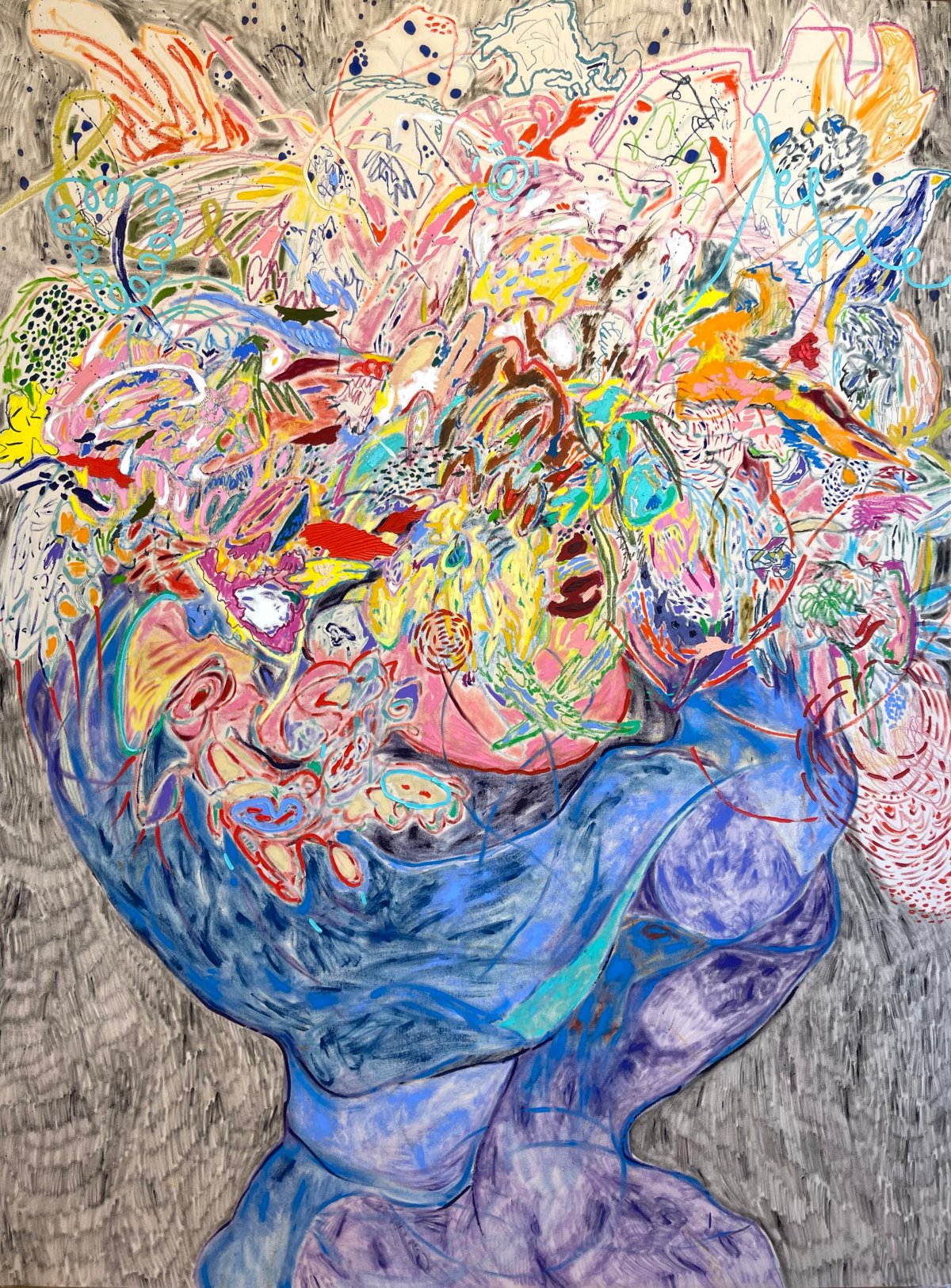 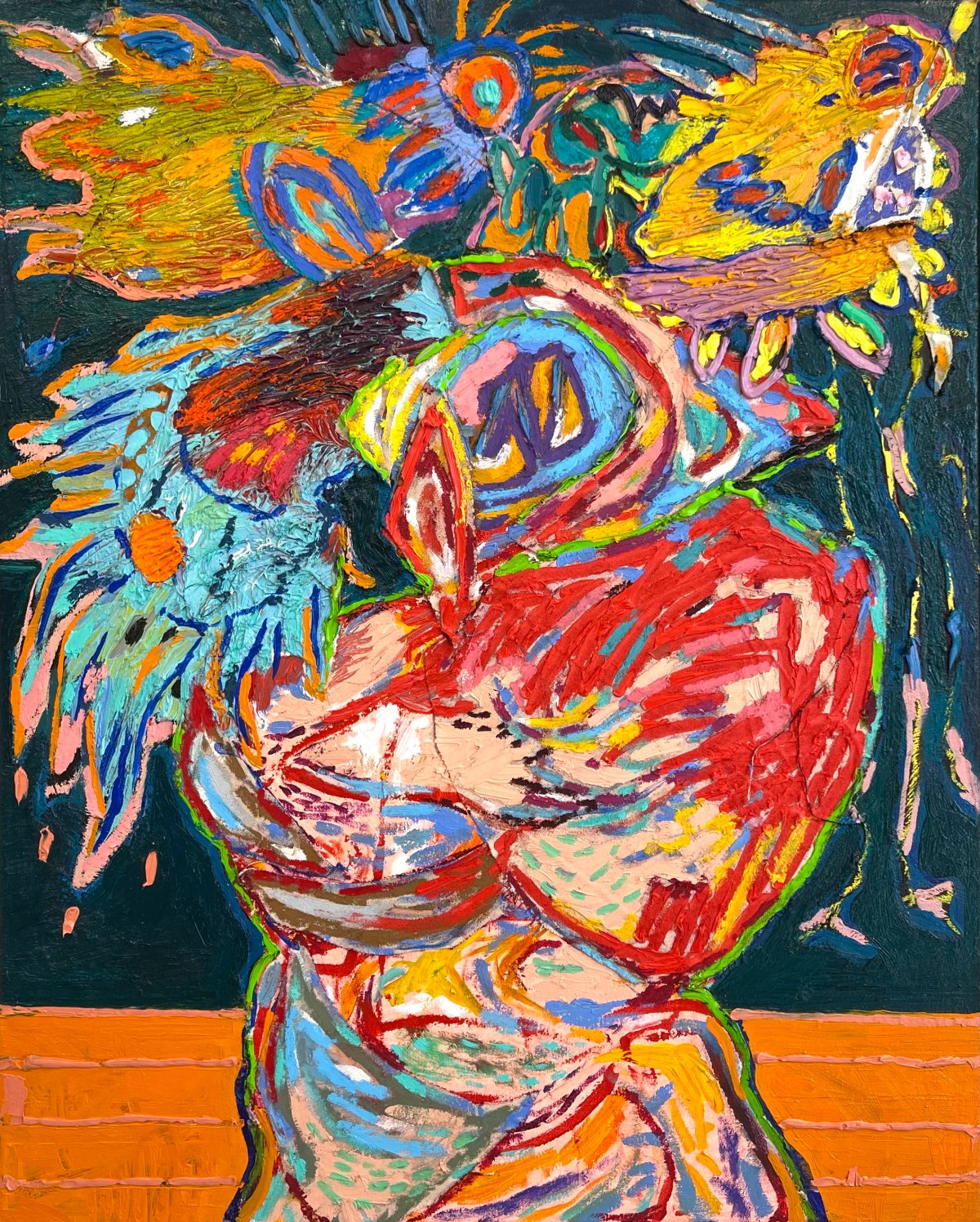 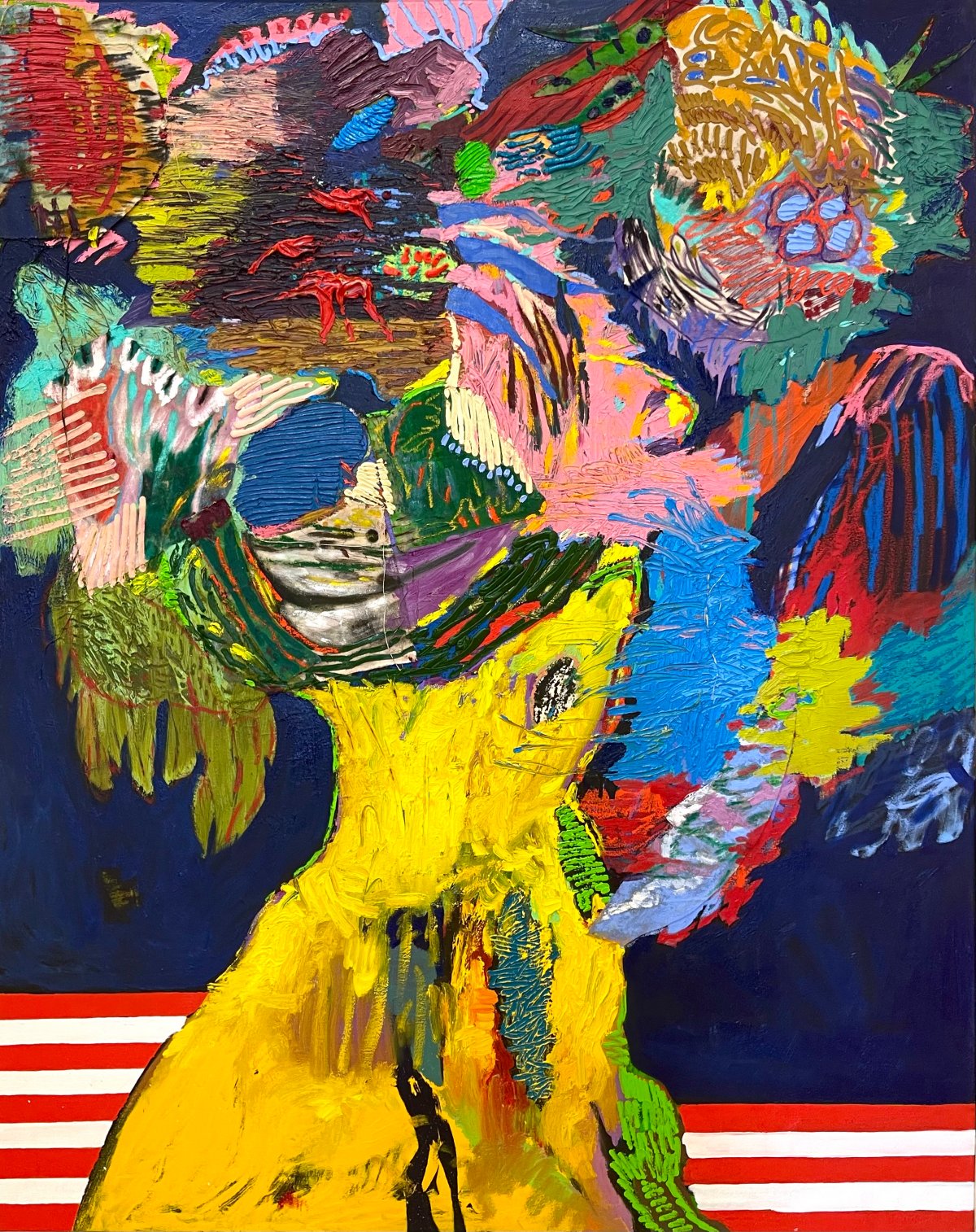 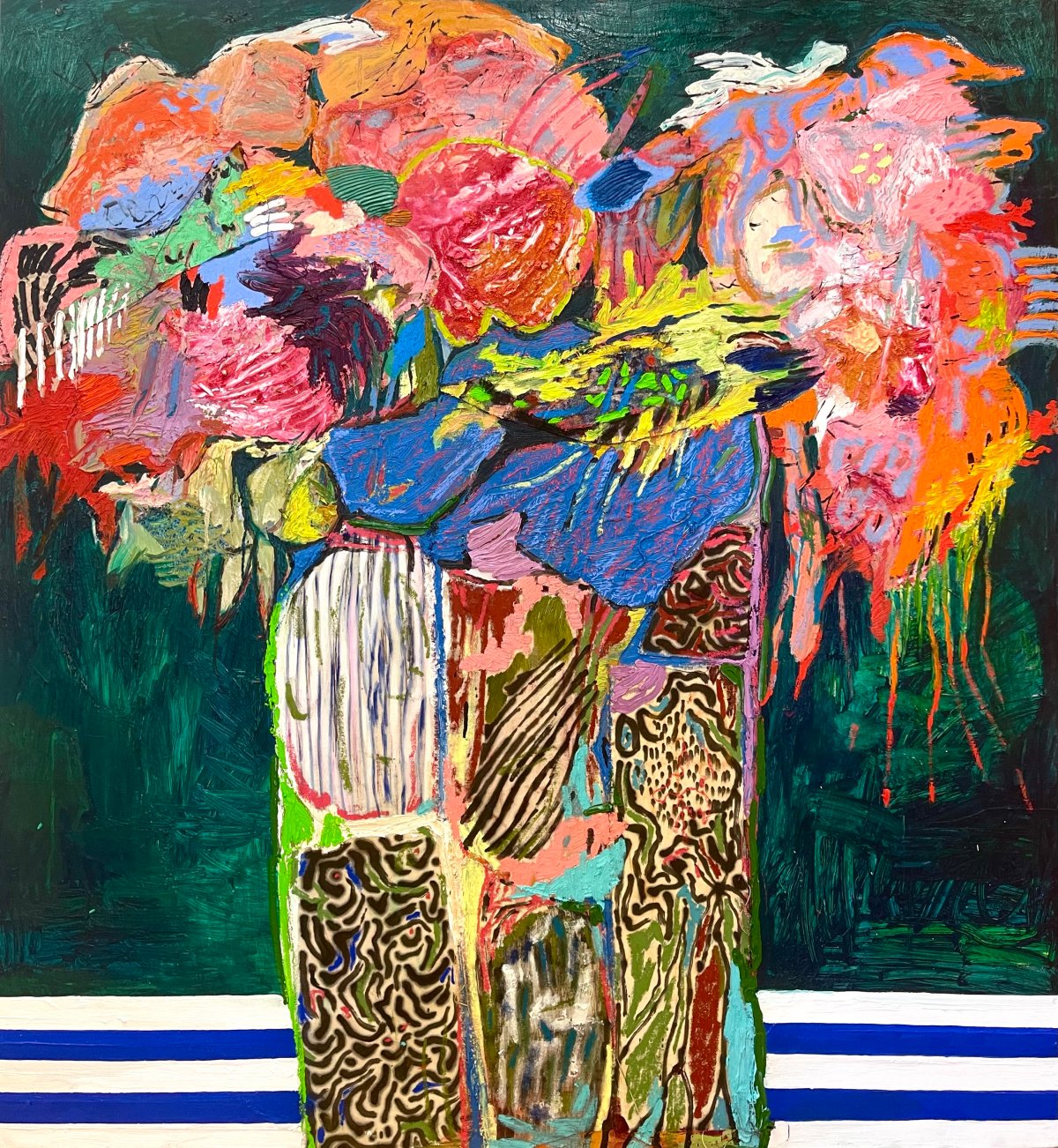 Ksenia Dermenzhi
On the Striped Table, 2022 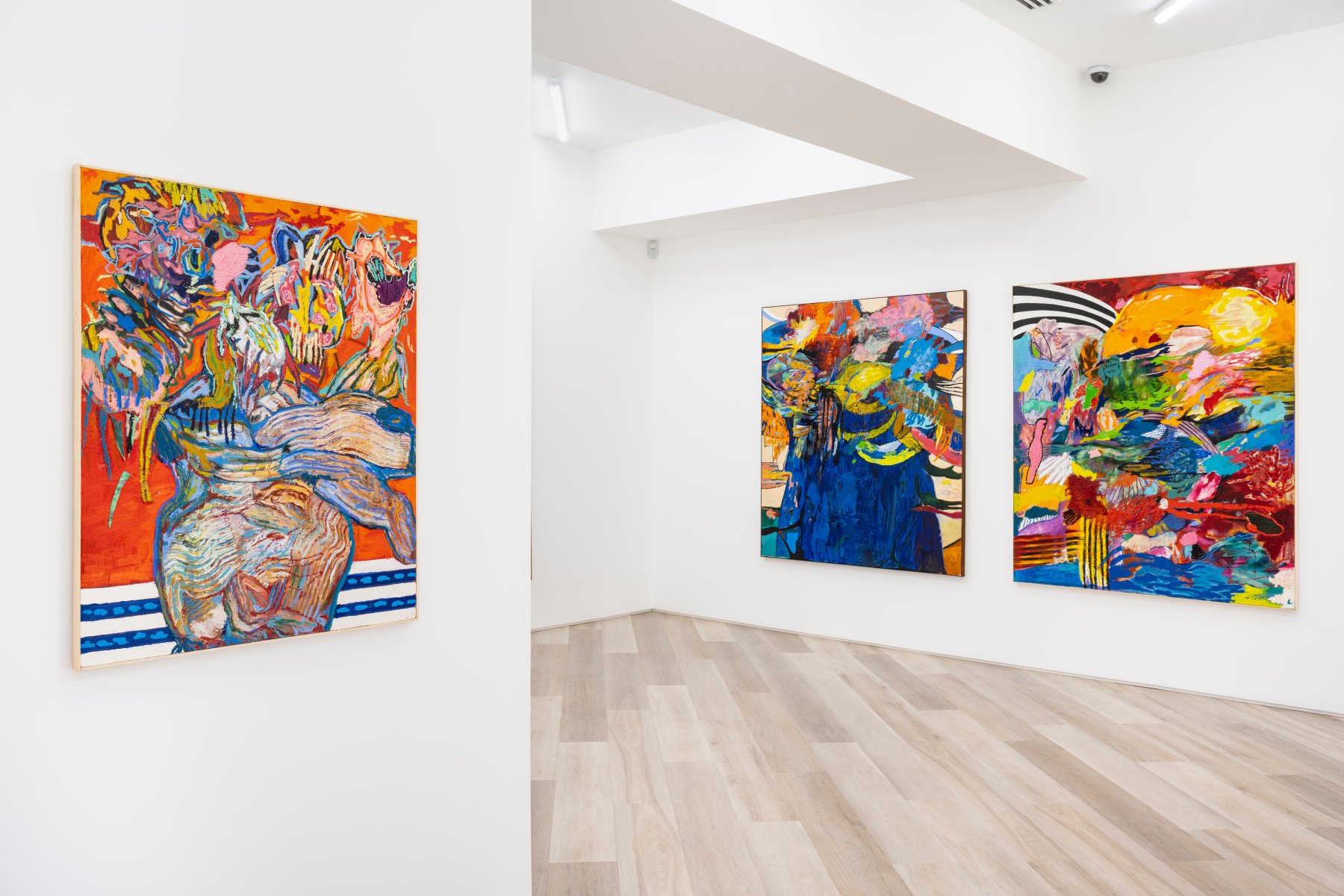 The gallery has worked with Ksenia Dermenzhi for the better part of this year in preparation for her solo exhibition with the gallery, In Bloom.

It seems appropriate that the title of Dermenzhi’s debut solo exhibition focuses on a word with such a romantic and loaded feeling. The word ‘bloom’, both a noun and a verb, suggests a grouping of flowers (n), which we see here in abundance (also one of bloom’s meanings); or to come into (one’s) fullness (v), which refers to both the paintings on display but also the process the young Moldovan artist has undergone to arrive at these exuberant, vibrant, and explosive works. On one level, these works are about flowers and colours and joy. But there is another exploratory line that we, as viewers, can almost trace seeing Dermenzhi develop into a powerful new painterly voice.

There is a real sense of joy and buoyancy in the works of Moldovan artist Ksenia Dermenzhi. Despite the unbridled energy emanating from these paintings, the London-based artist displays a mastery over her technique that belies her youth. Seeming to borrow from the free-form approach of the Blau Reiter period, her paintings similarly utilize a broad language of abstraction, including traditions known by Surrealist and Cubist artists. Or perhaps a 20th Century formalism is at work: allusions to artists like Cy Twombly, de Koonig, or Lee Krasner, where frenetic energy suggests a sense of form, or psychological states. Her dynamic and frontal compositions are built up over time through colour-washes and painterly spills, intentional marks as well as organic expressions of paint. True abstraction is a difficult technique to ‘get right’: Picasso himself was well documented as saying it took a lifetime to paint ‘like a child’, and Dermenzhi’s large-scale floral and abstract paintings seem to house that chaotic, childlike energy. Perhaps most astute is her similarity to the great Kandinsky, whose paintings were a direct response to music, and likewise, Dermenzhi’s works show a masterful control of freedom, spontaneity, and considered mark-making. The works are simultaneously based around real and imagined floral arrangements, always harkening to some sense of realism, but allowing for a sense of play, joy, and fantasy.