Influenced by a fascination with food and its history, La Grande Bouffe (The Big Feast), draws its name from the satirical 1970s French cult film directed by Marco Ferreri and explores themes of everyday gastronomy. With an aesthetic inspired by Jean Brusselmans, Giorgio Morandi and Paul Klee, the Pop-Art movement, arthouse film, as well as cookbooks from the 60s and 70s, Kristof Santy’s practice is reminiscent of a vast library of visual references. His latest body of work, primarily influenced by folk art and customs, iconises the simple things in life and celebrates the ubiquitous act of cooking. 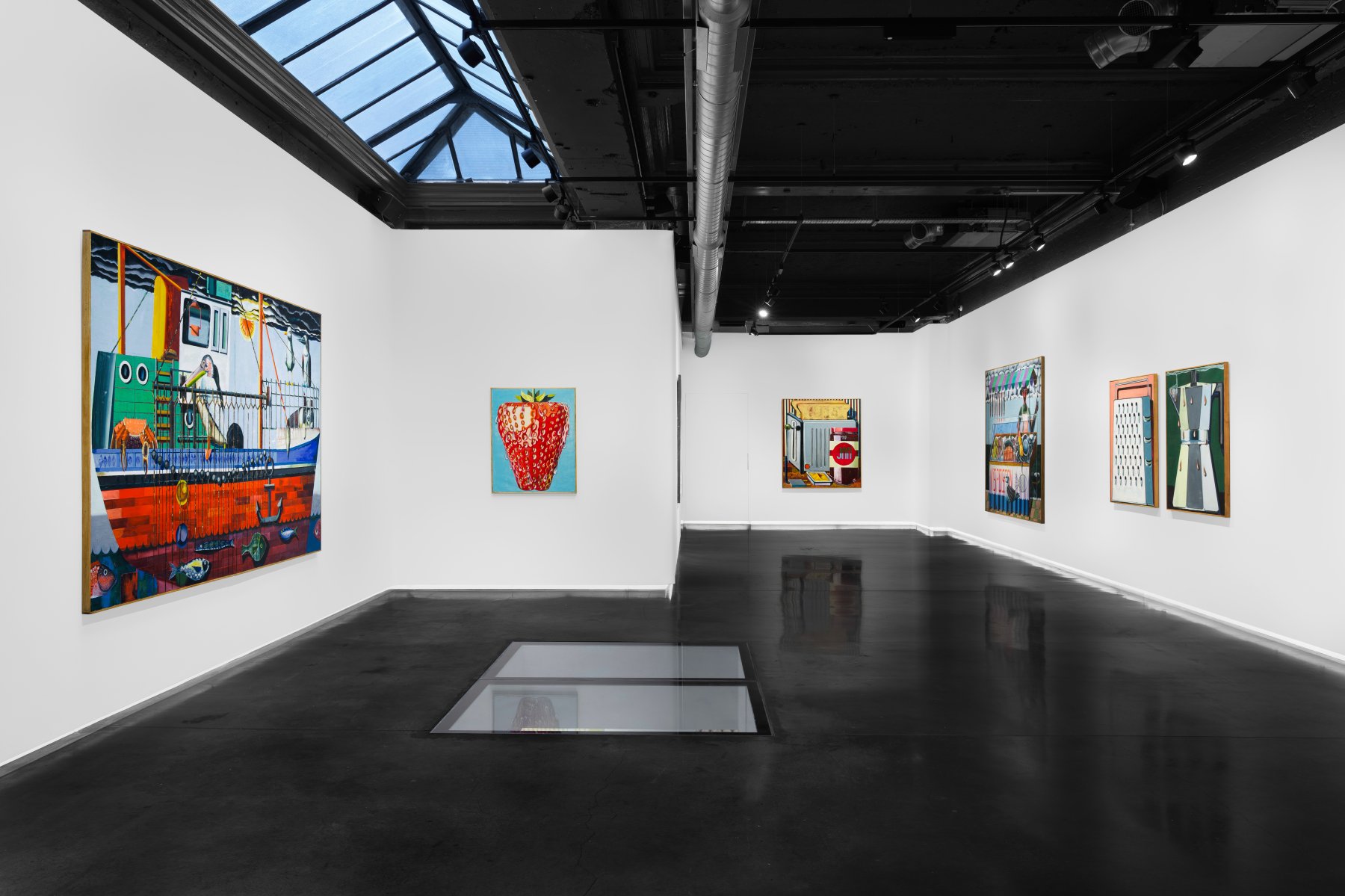 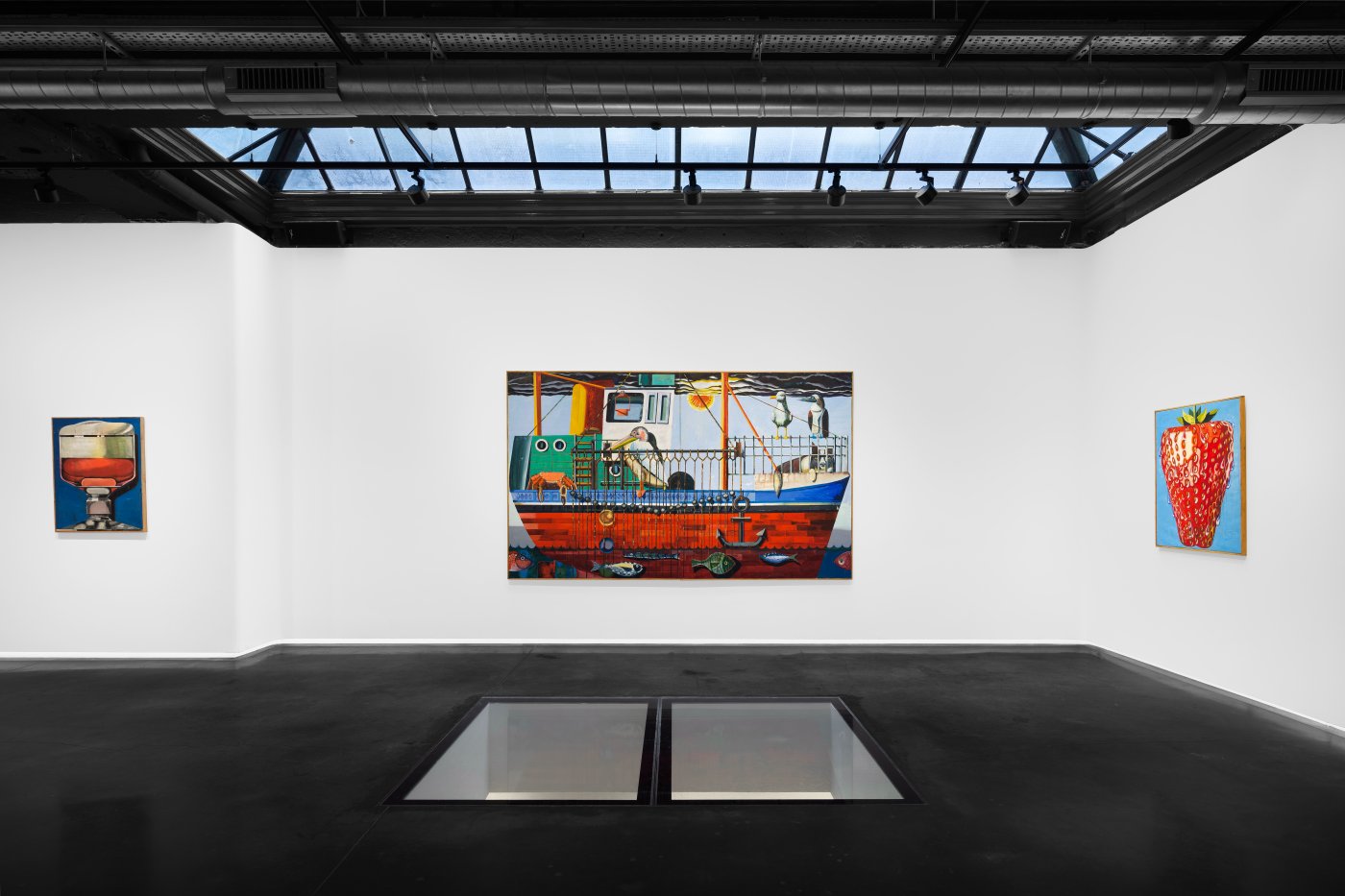 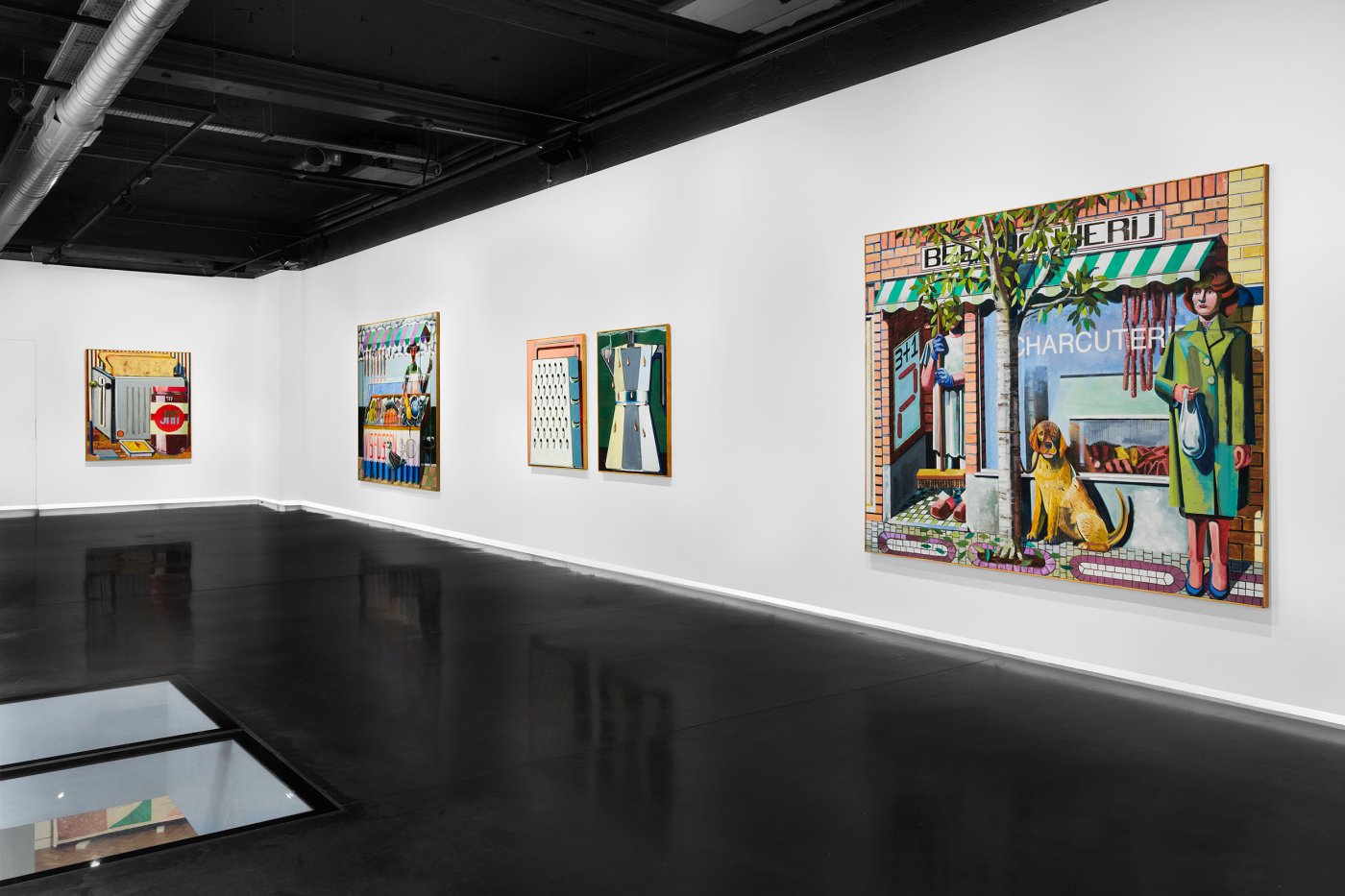 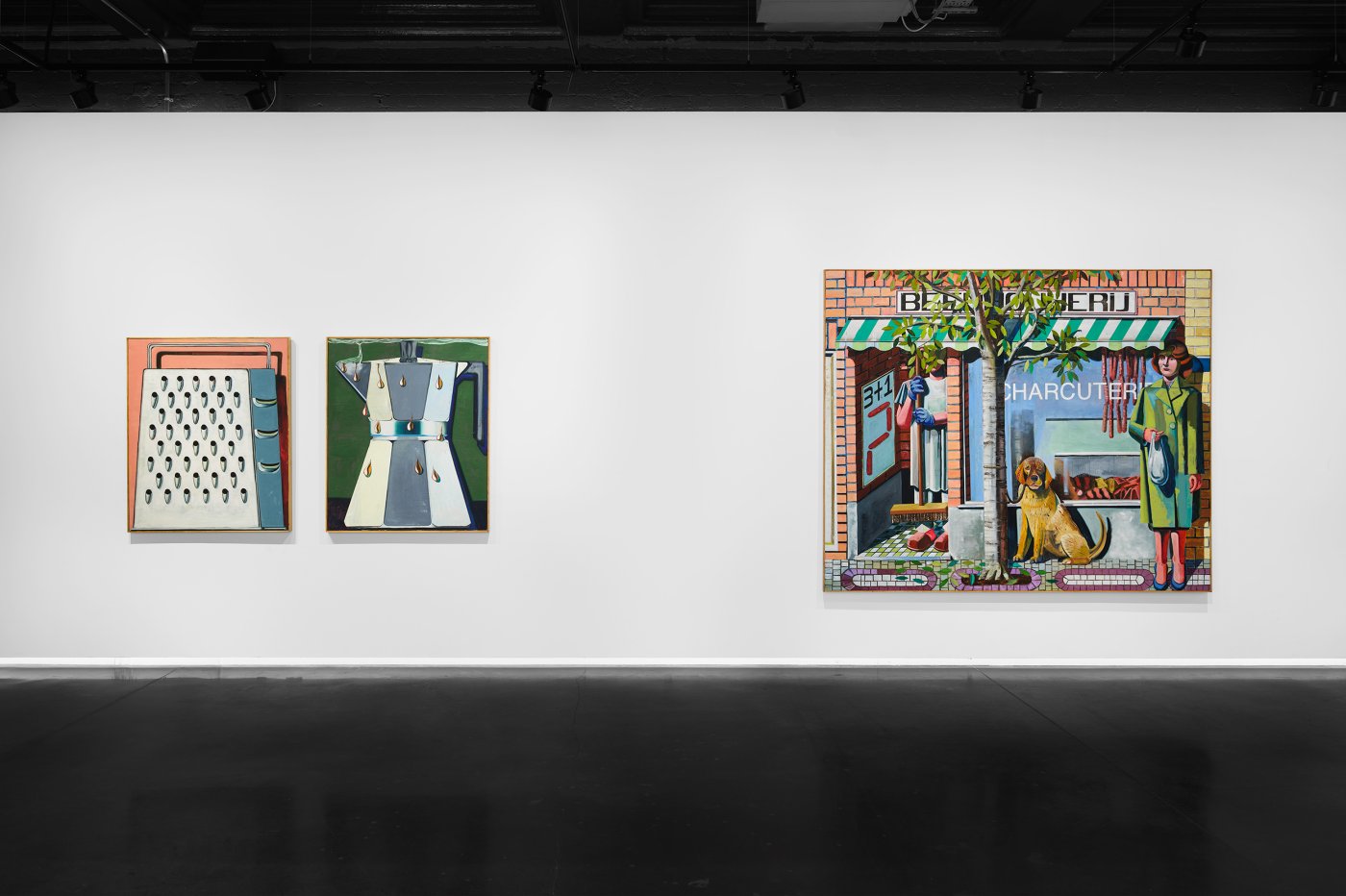 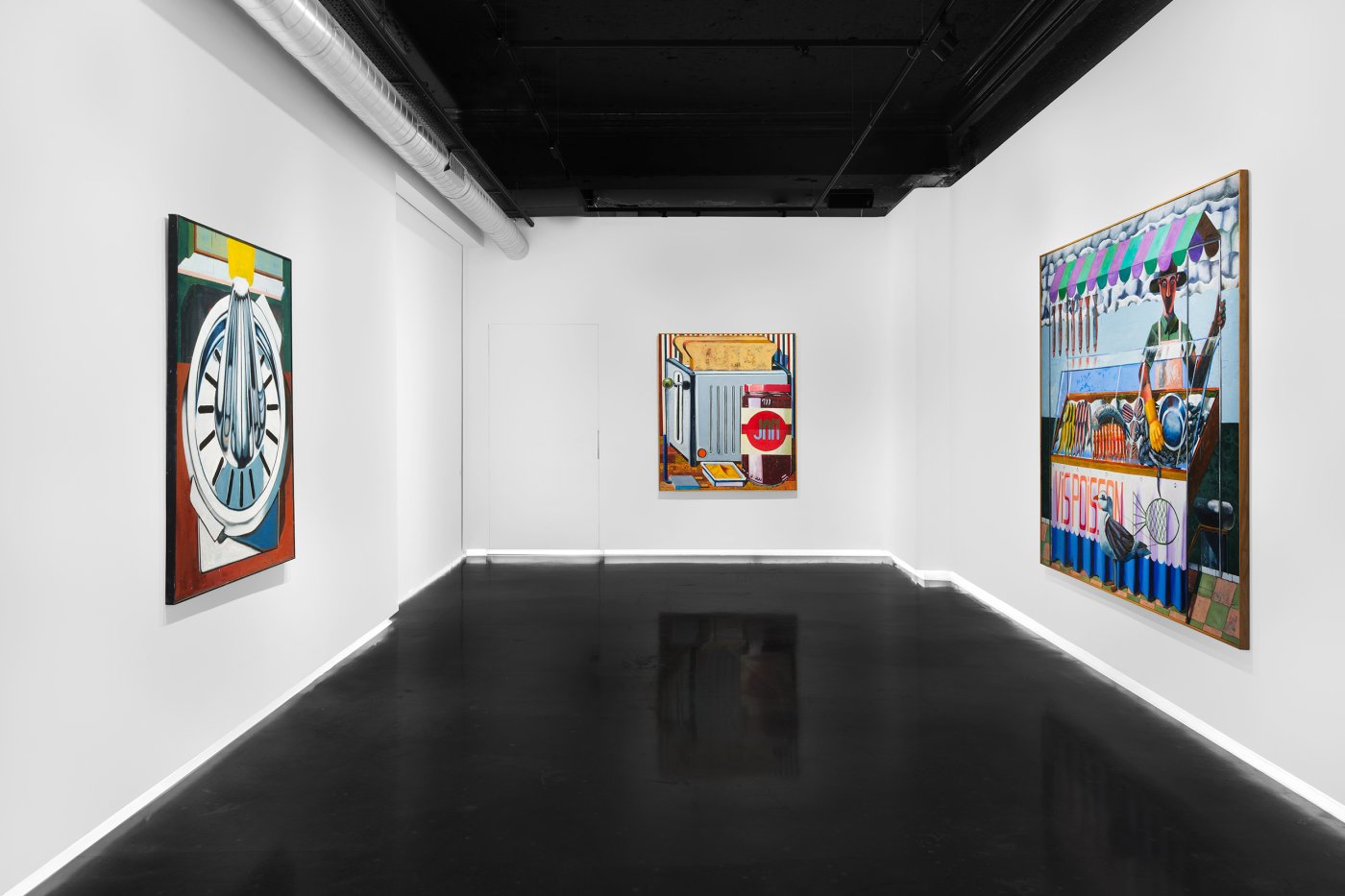 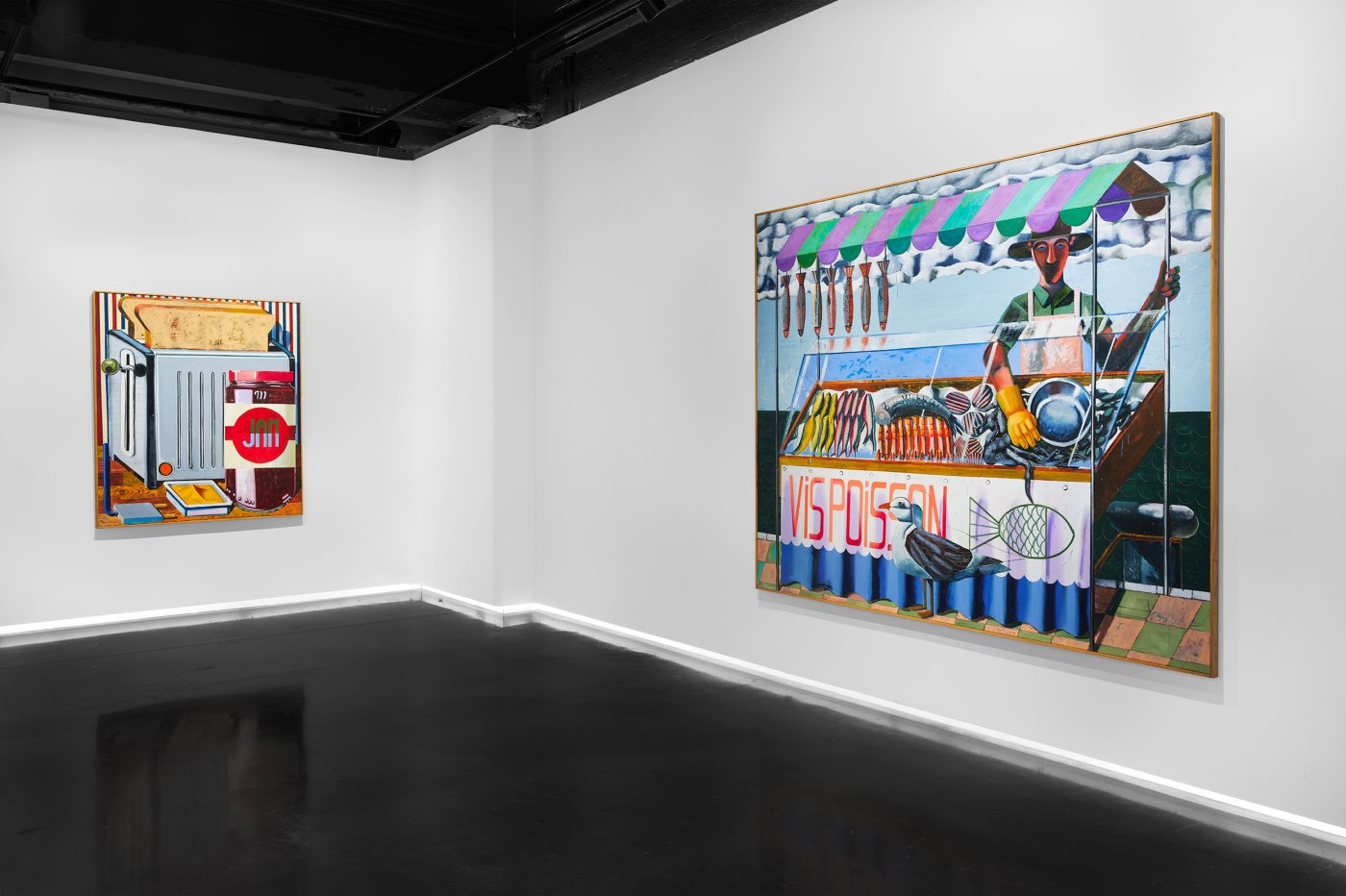 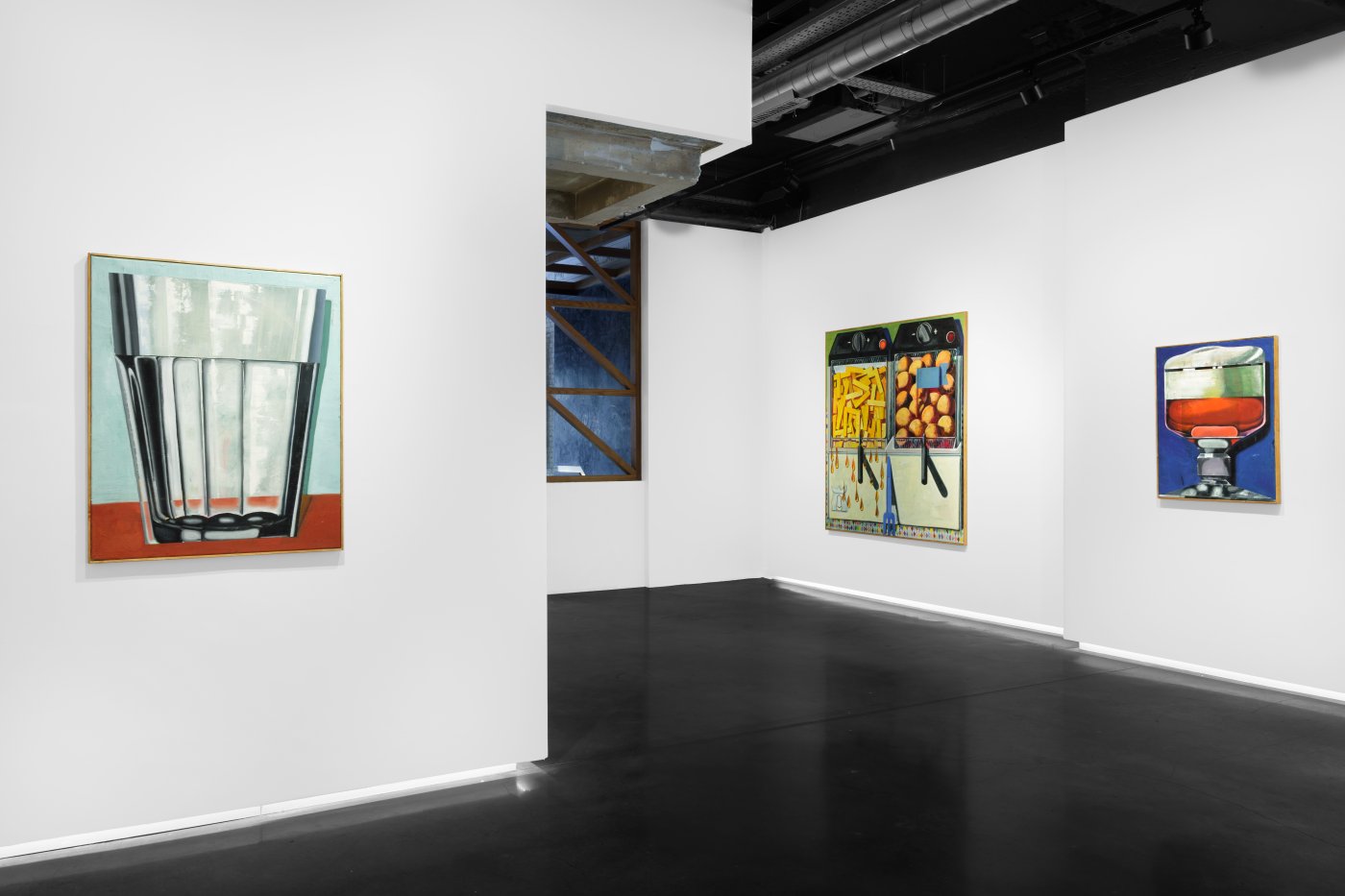 Santy considers himself to be a visual translator of the everyday, bringing a revitalised dimension to a host of seemingly banal objects such as toasters, saltshakers and coffee pots. Rendered in bright and vivid tones, La Grande Bouffe possesses a joyous and playful quality, drawing viewers in with the enveloping scale of each work. In an artistic process of erasure, layering, adding and removing, each of Santy’s paintings takes on a life of its own, breaking free from exact representation to present a distilled essence of everyday life.

Santy presents us with images of fishing boats, farmers at work and numerous still lives of familiar kitchen equipment. Beenhouwerij (Butchery) exemplifies the style and subject matter that the artist has been developing over the last two years, depicting a simple scene of a butcher shop window. Sausages and other cuts of meat are displayed, while a smartly dressed woman waits outside. Meanwhile, a dog sits patiently at the centre of the composition, its eyes meeting those of the viewer. The butcher himself, identifiable by his white apron, is partially obscured by the leaves of a tree, his facial expression concealed entirely. In another work, Broodrooster (Toaster), food and the anticipation of eating seems also to be the theme. Two pieces of bread rest in a steel toaster, its elongated form is emphasised by the striped wallpaper and the flat wooden surface. A jar of jam and a pat of butter sit tantalisingly at the forefront of the painting. The toaster remains unplugged, the jam jar is unopened and the butter is untouched; it is as if the scene itself awaits a human presence.

Assumptions can be made about the meaning of Santy’s works, but it remains crucial for the artist that his paintings elude any sense of narrative. They do not tell stories or give opinions. This resistance to storytelling is seemingly heightened by Santy’s characteristically flattened perspective, which does not give way to depth. Instead, the artist’s paintings pay homage to daily life, returning to the universal fundamentals of what makes us all human.

Santy is greatly inspired by the presentation of everyday plates of food and the visual language that stems from these traditions. He remarks that hunting and cooking tools often fill the collections of national museums across the globe and he sees cooking and eating as something universal to all cultures and anthropological contexts. The artist chooses to draw on this rich history while also situating his works in his own uniquely personal context. Santy’s personal life, which always strives towards simplicity, mirrors his art. He lives minimally, travelling only by foot or bike. He enjoys the familiar comfort of his garden and studio, the company of his family and close friends and walking through the streets of his home city where all faces are known to him. With La Grande Bouffe, Santy captures these fleeting snapshots to create his own legacy while finding the remarkable in the seemingly unremarkable aspects of the everyday.