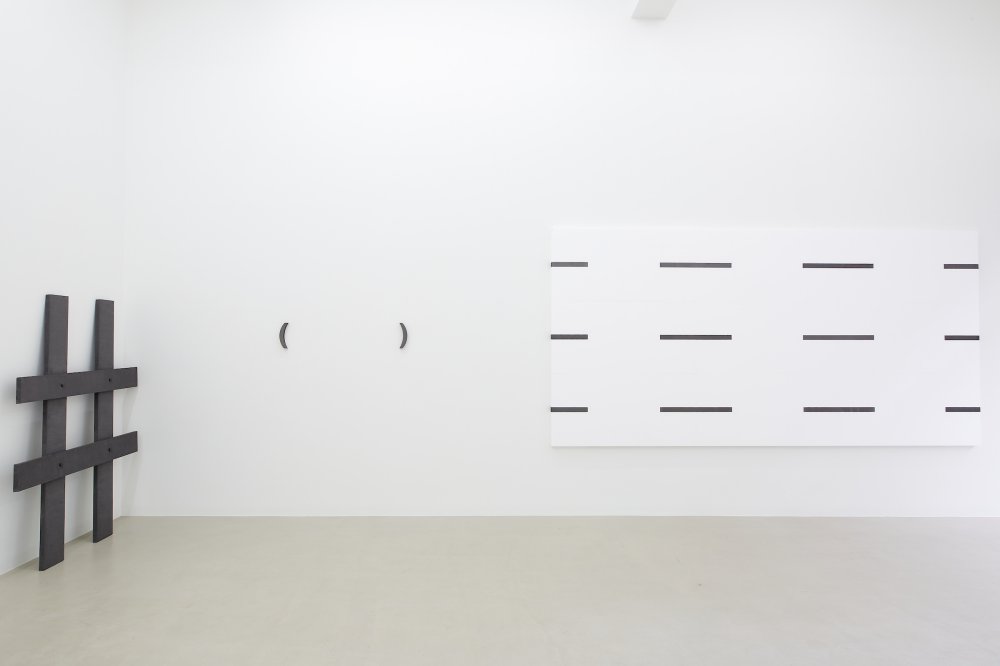 Kristján Guðmundsson has for years been making drawings about drawing, but there is a temptation to think of the various works within this genre rather as a single drawing extended over time and space. Guðmundsson’s drawings are made through the separation of the elements drawing: of its time, material, space and labour. These constituting elements are deftly teased apart to make them the subject and matter of this work. For instance, in the 1970s Guðmundsson made the Supersonic Drawings: works on paper made by the effect and residue of a gunshot. An infinitesimally brief moment in time given perpetual spatial form. The work is as much about what is missing as is what is present in the drawing, there is no dextrous manipulation of line by the artist. Instead Guðmundsson’s has abdicated that agency to an event which he only initiates. Such work can be seen to relate to Guðmundsson’s central role in the SÚM movement from the 1960s, a group of artists in Iceland influenced by Fluxus and irreverent approaches to art making. Guðmundsson has maintained this attitude throughout his career and no where is it so evident as in his disruption of the orthodoxies of drawing. More recently he made the Olympic Drawings, an unexpected combination of sports apparatus and graphite wall works elements. Sprinters’ starting blocks, a javelin, weightlifting equipment, etc are positioned beside or below four regular rows of graphite. While there is nothing quite so elemental as the Greeks, the sports equipment also suggests a stasis in activity, the absence but possibility of explosive athletic movement and energy. Similarly the graphite eludes to potential, and is the recurrent material in Guðmundsson’s drawings. The material of drawing affixed directly to the wall or support, it retains its potential to describe shapes and trace forms on papers but in Guðmundsson’s compositions it is in its raw state and has, untransformed, already been made into a drawing.

The drawings in this current exhibition may appear more conventional, elegant compositions of graphite on a support. The work has the deadpan-drama and scale of minimalist painting: geometric forms on brilliant white backgrounds. Yet the supports are not canvas but ubiquitous and unequivocally manmade polystyrene blocks. The same material that is used to package all manner of consumer goods that are sent through the mail. Its utility is to fill those voids in packing, occupying the areas of absence, it is a literal materialization of negative space. The polystyrene blocks are consistently sized rectangular shapes, a standardized dimensional form, and like a packaged product, the graphite is inserted into the polystyrene. These sculptural drawings give a physical depth to the pictorial space, and elude to a consumerism of product and commerce. The drawings are of this modern age, creating a poetry from the banal and ancillary material of the age of Amazon.

In Guðmundsson’s approach each of these bodies of work describes an irreducible moment of drawing, and yet collectively they could be thought of as a singular work. This career long engagement with drawing has successively focused—with an uncanny intensity and wit—on reductive aspects of drawing. While each work has its own set of elements and concerns, collectively the work presses at the edges of drawing in the modern age. Guðmundsson’s work, like all great drawing, elicits an attention to how we connect to the material facts, and nothingness, of the world.