Perrotin announces its collaboration with San Francisco-based artist Koak with her first solo presentation in Asia, The Driver, an exhibition of new paintings and sculpture. 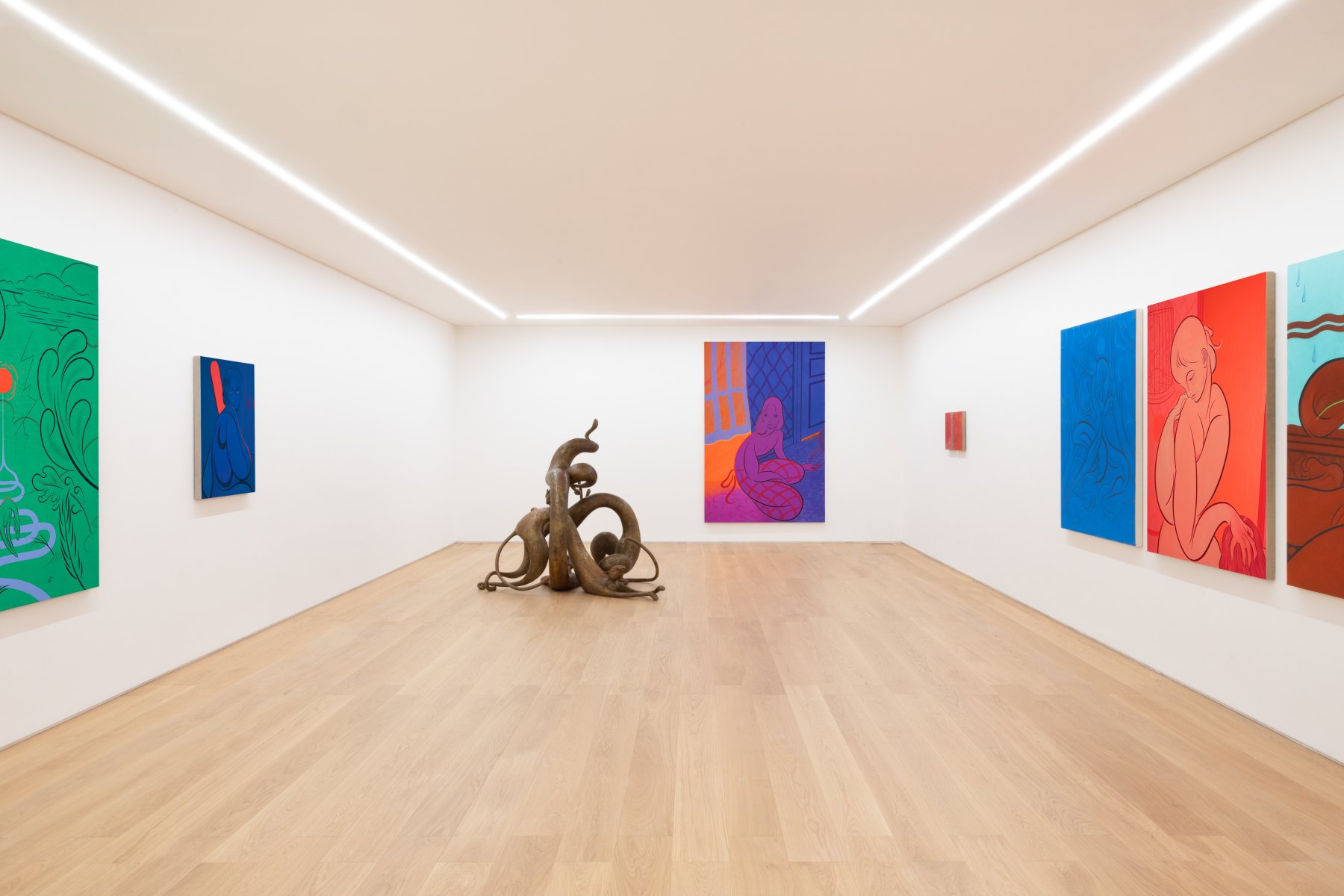 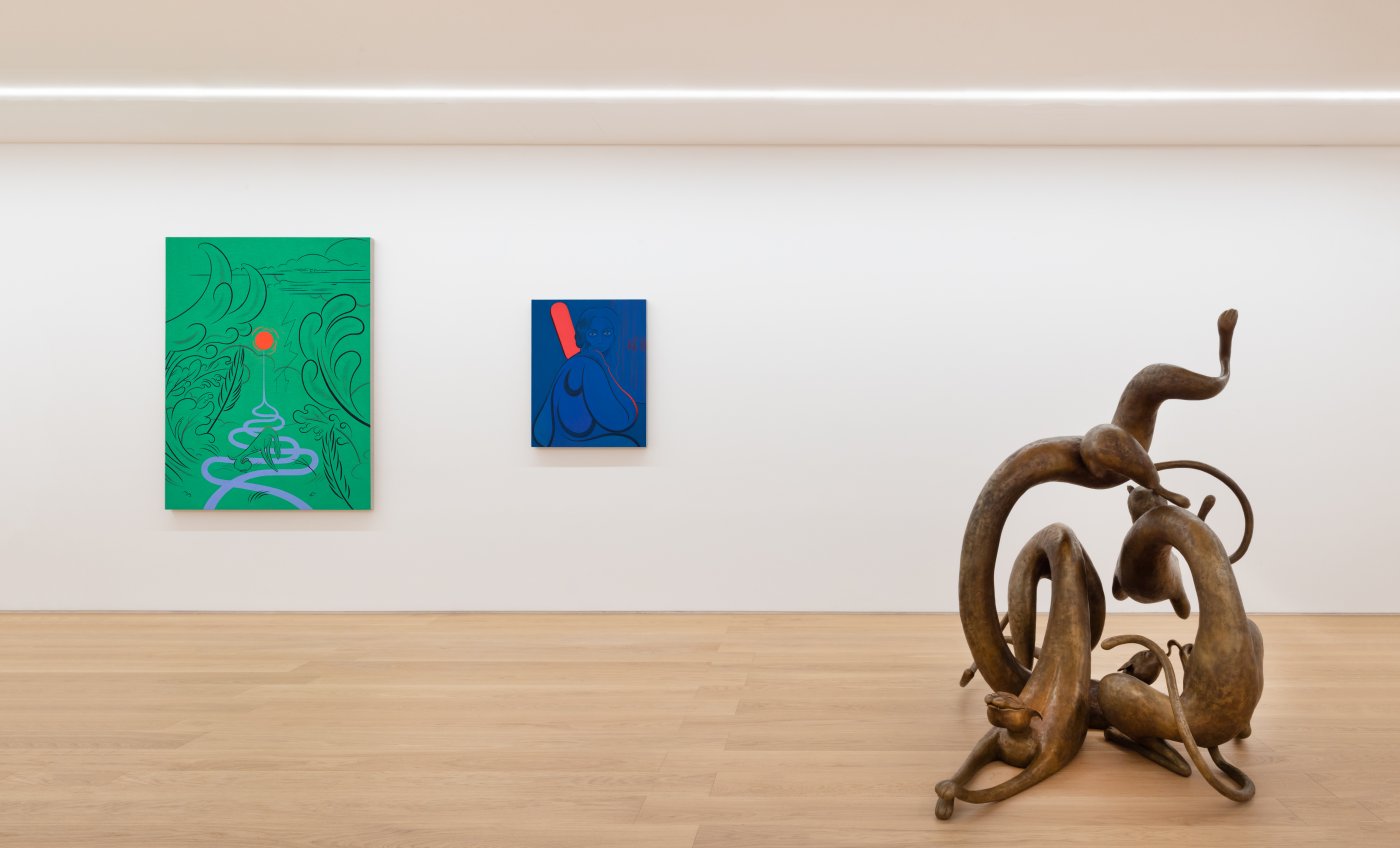 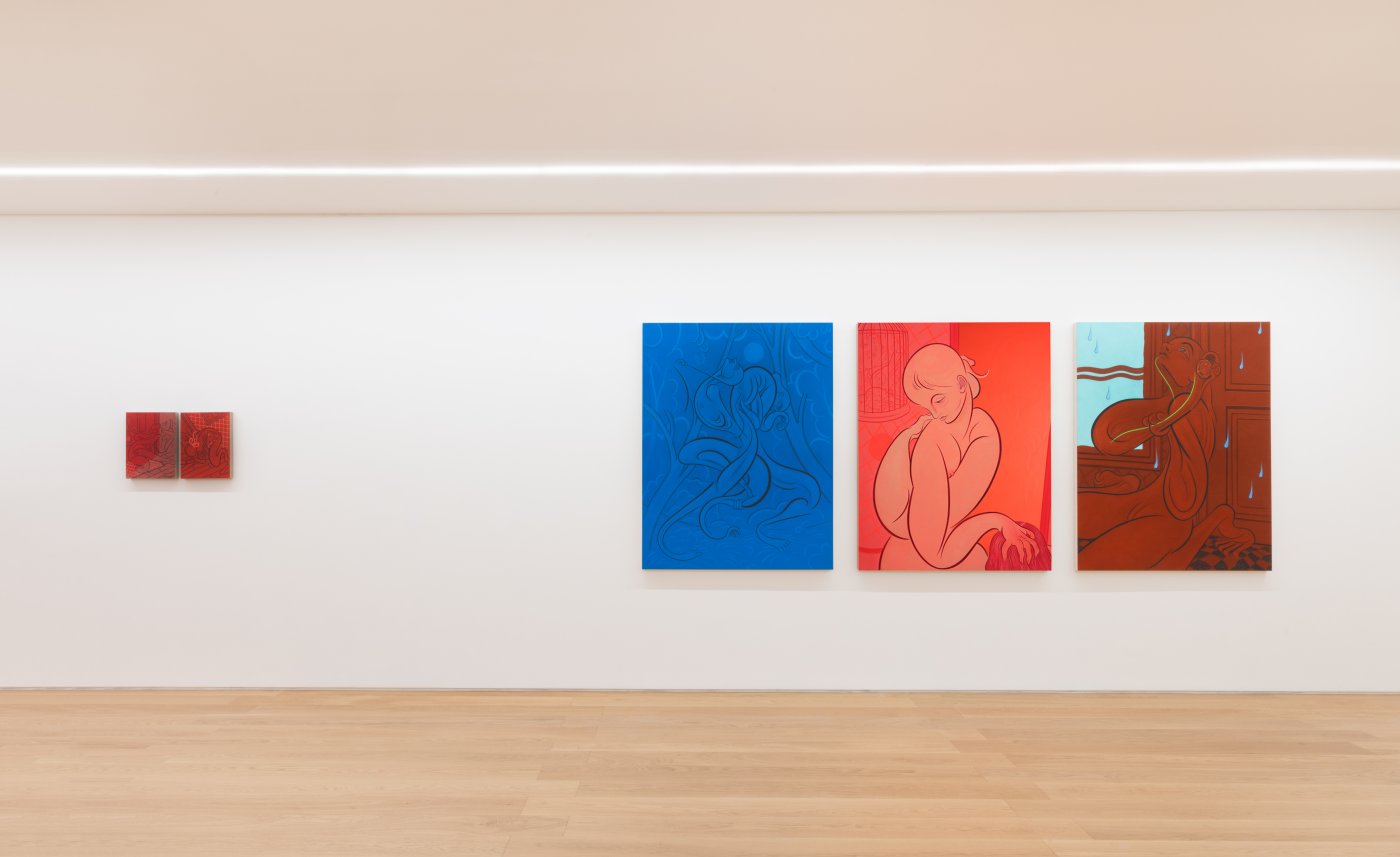 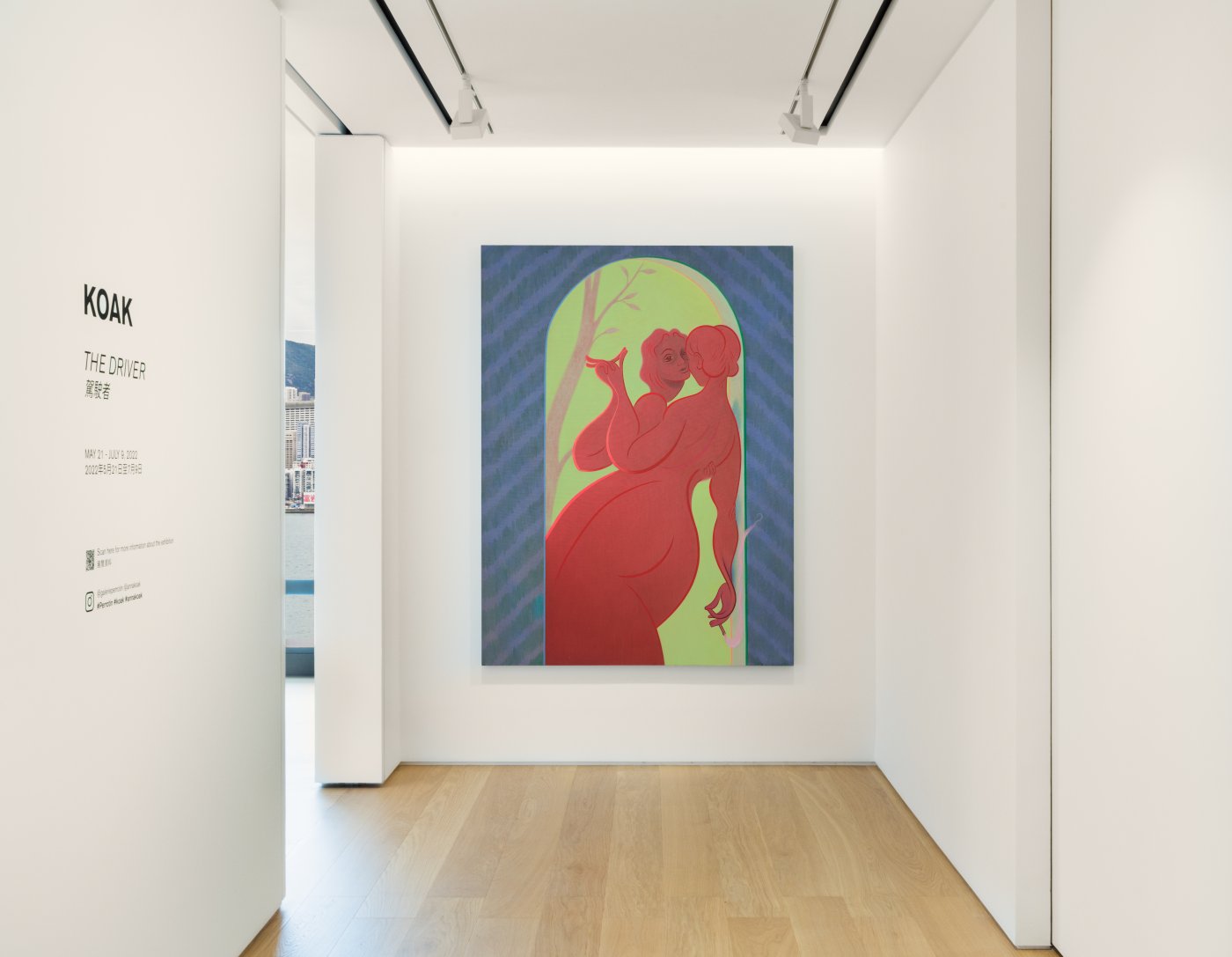 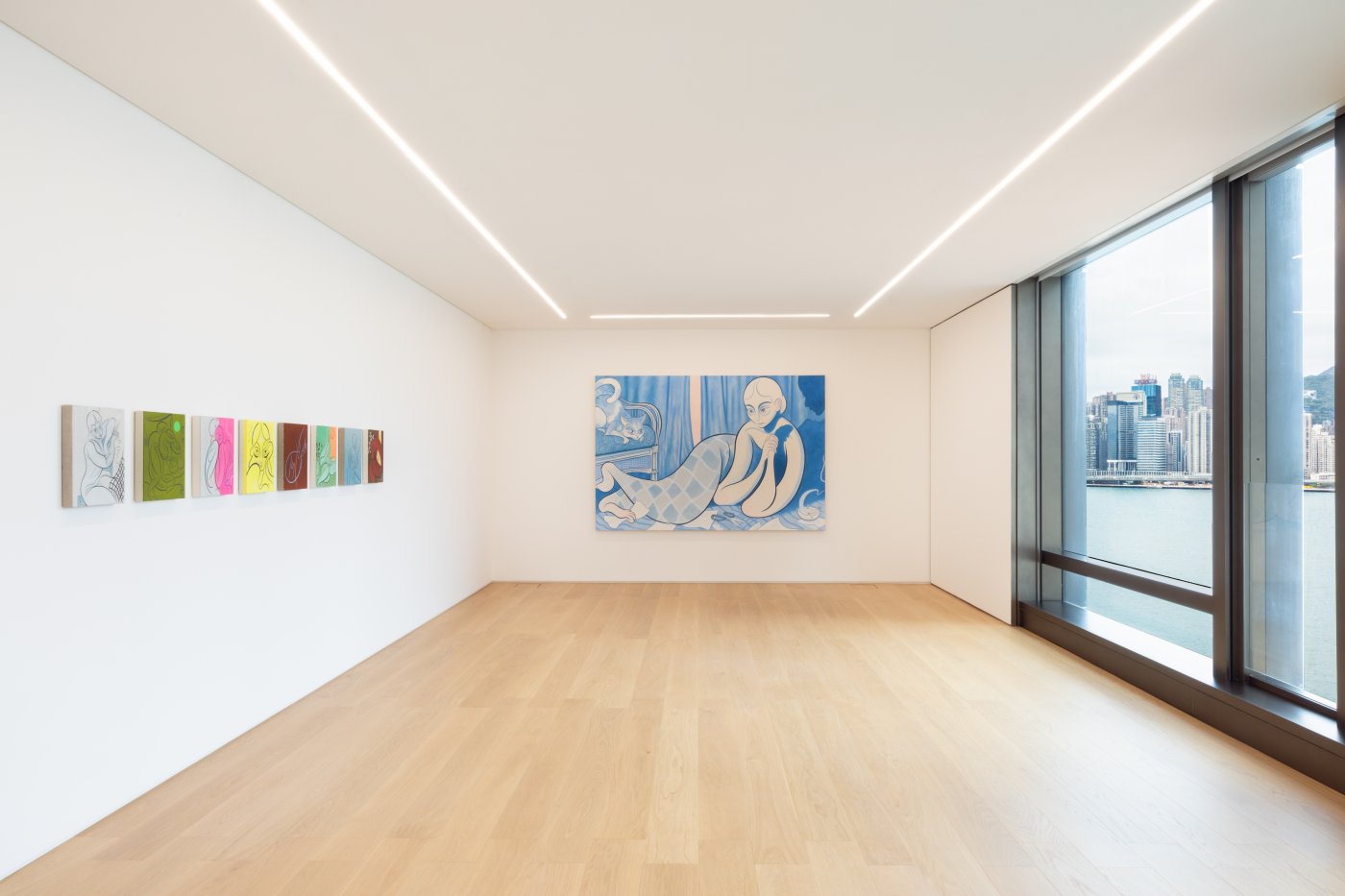 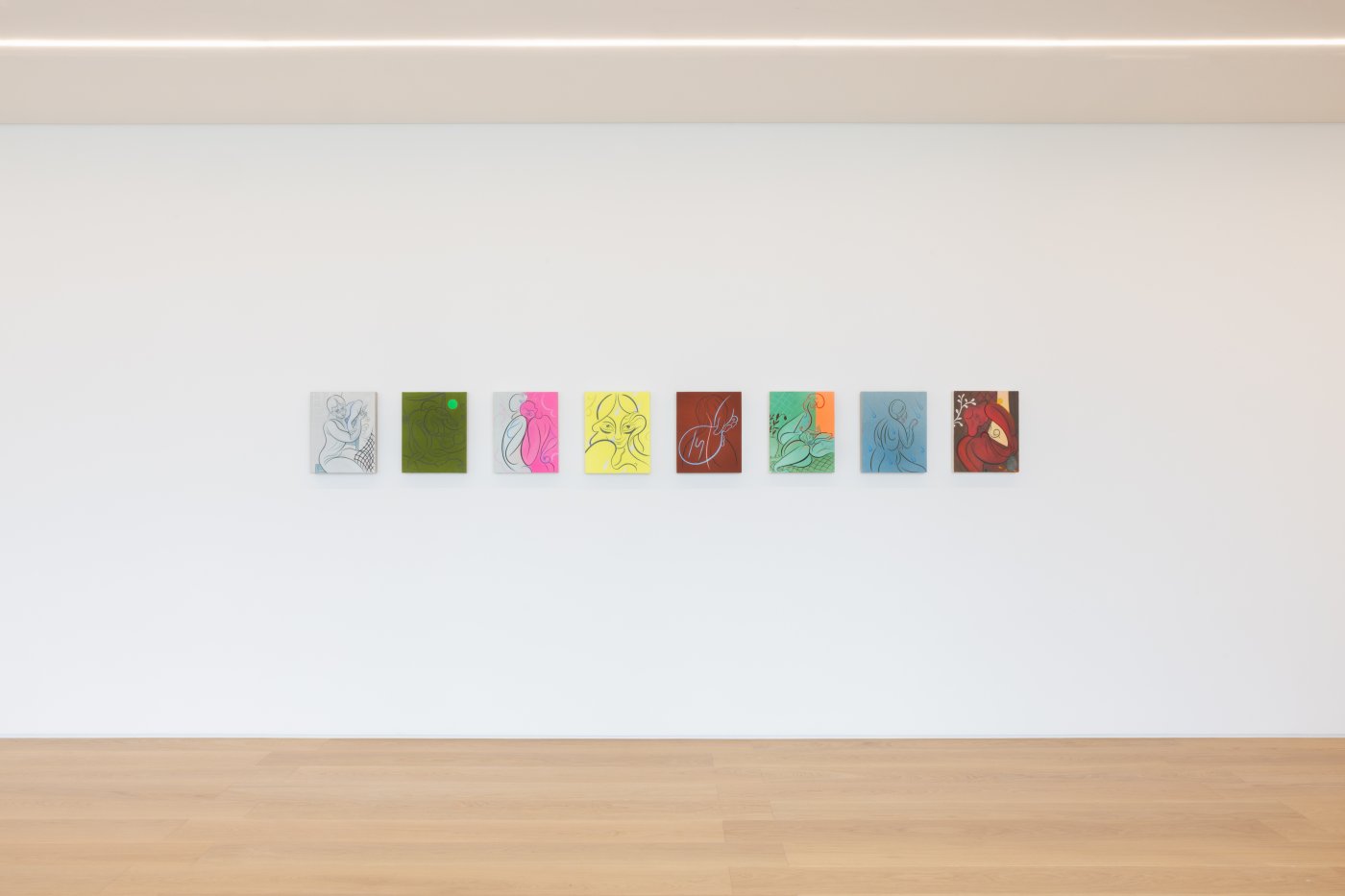 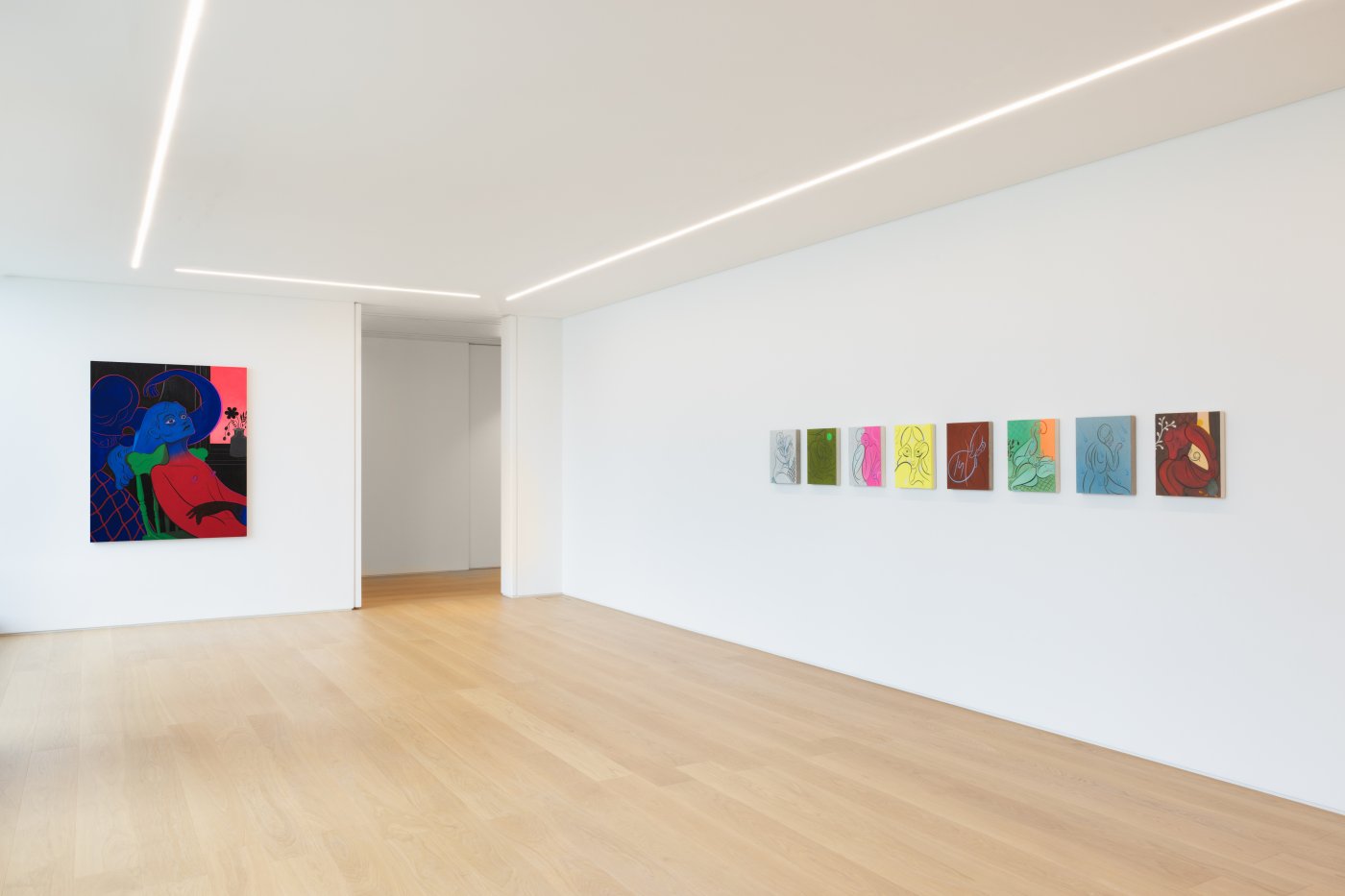 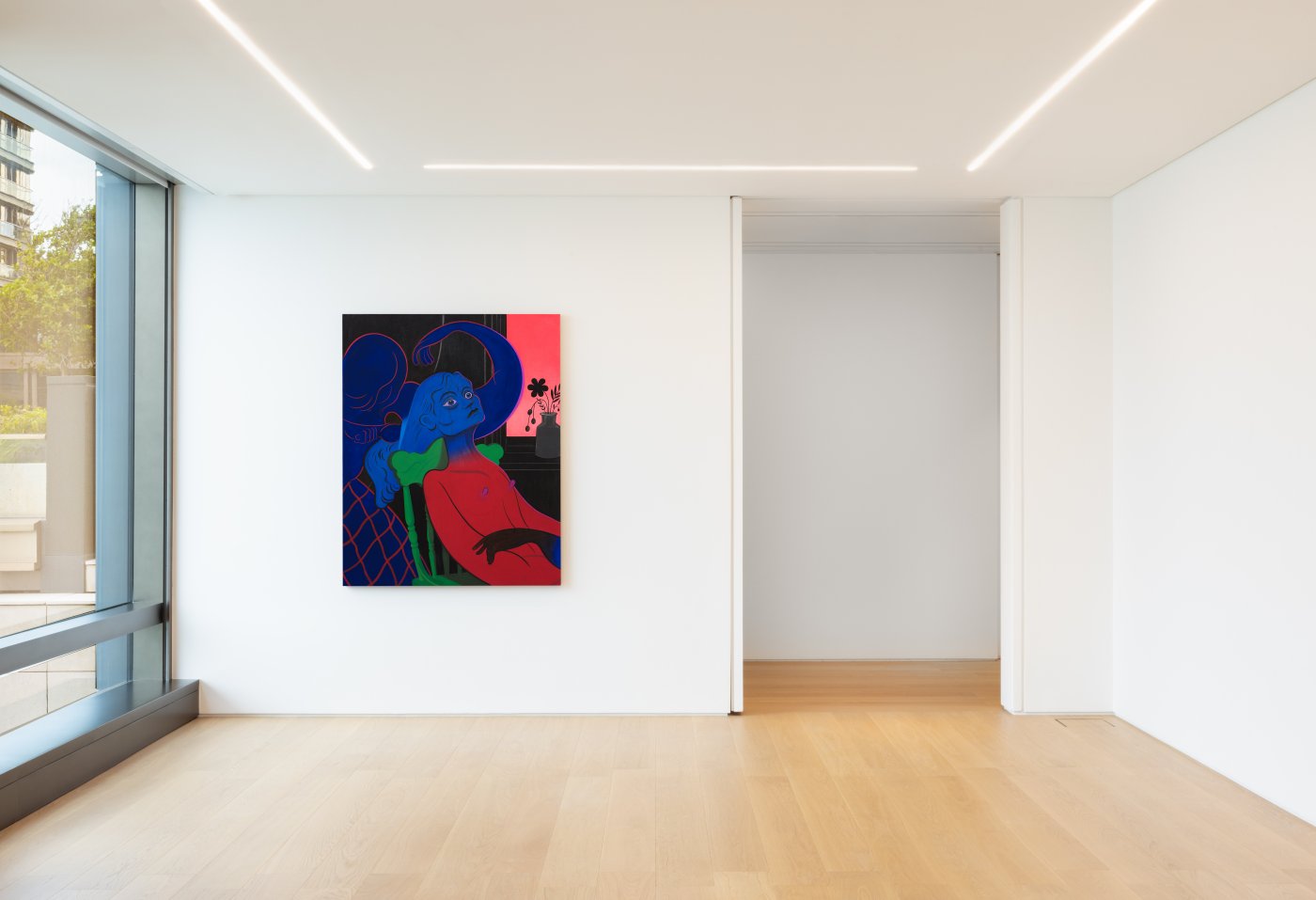 Archetypes of the Self in Living Color

“To project feelings into outer objects is the first way of symbolizing, and thus of conceiving those feelings,” wrote Susanne Langer in her vital philosophical treatise on the nature of art as a form of communication. She continues, “The conception of ‘self,’ which is usually thought to mark the beginning of actual memory, may possibly depend on this process of symbolically epitomizing our feelings.” (1) The expression of feeling is a signatory attribute of the paintings of Koak, and it is a force that she uses to articulate her bold, arresting style. Her canvases, saturated in mood, denote various emotive timbres through her deployment of color, line quality, spatial configuration, and gesture. The figurative subjects that populate her compositions— namely feminine figures and felines—moreover, are vehicles for expression and indexical devices that communicate a vast range of behaviors and emotional states. Koak has said that her paintings are “about archetypes of self that we have that are developed throughout our life or are internalized by experience” (2) and she suggests that she is playing with, and perhaps upending, these internalized archetypes.

This is especially evident in her most recent body of work produced for her exhibition in Hong Kong. Koak developed this series of paintings during the pandemic and in them she heightens the sense of delay, interiority, angst, and expectancy that are quintessential aspects of the human emotional experience over the last two years. As a result the compositions exhibit and are redolent with the internalized, desperate cultural mood of the time. In particular, they convey a sense of pressurized space that is juxtaposed with the ominous atmosphere of the outside world. In this sense they tap into our experience of isolation and self-reflection. This becomes apparent in a work like My Cage (2021–2022), where a figure uncomfortably crosses her arms and tears at a downturned head—a sign of distress. A bird cage hanging nearby underscores her feeling of confinement.

One of the first things that strikes the viewer upon seeing these paintings is the intensity of the palette which exhibits a variety of psychological states. The hues are markedly different from previous bodies of work that possess cheery canary yellows, soft peaches, pale pinks, and baby blues. In fact, in this most recent body of work, the colors are what she describes as “domineering.” (3) In The Cocoon (2021–2022), Koak drenches a crouching figure in red-violet, setting her before a deep ultra-marine wall and fire-orange light that floods the room. For those in San Francisco, the ominous orange glow beyond the window immediately recalls that unforgettable day on September 9, 2020 during the pandemic that the city’s skies alarmingly turned orange as a result of the fires blazing northwest of the city. The sharp contrast in the coloration in Koak’s painting delineates the sense of space indoors and effectively suggests that one’s home was a kind of cocoon from the virus and the smoky atmosphere at that moment in time. On this point Koak explains, “the sense of unease presented by the unnatural quality of light in the paintings, very much is intended to reflect the last several years of feeling weary from the abnormal light from the fires on the West Coast, as well as a sense of tenuousness regarding the outside world.” (4)

Like in The Cocoon, the painting The Loop (2021–2022) presents a range of jarring colors that commingle in the surface plane. The green of the chair contrasts sharply to the blue of the person’s face, the red of her body, and the black back wall. The artist states that in making these works she sought to blend colors that “shouldn’t really go together,” in an effort to render harmony through coloristic disharmony. “In that way,” she says, “the color choices become an extension of the ideas within the works—a reiteration of imaging disparate parts as a unified whole.” (5) In this way, Koak represents the conflicting moods and psychological states—the sadness associated with the blue head, the anxious yellow reflection in the blue eyes, and the anger captured in the red torso—that blend in the physical body and become a composite reflection or expression of the self. The gesture of the person behind the seated figure further augments her tense state as we see the figure tautly pulling back her hair while it gets aggressively brushed. Again, the ominous red-orange sky filters through the nearby window.

In The Driver (2022) the viewer encounters the elegance of Koak’s soft, undulating lines that define the contours of the reclining figure who clasps her hands in a wistful gaze. Although the sinuous, graphic nature of the lines appears somewhat spontaneous and natural, it is actually carefully constructed. Much of Koak’s drafting happens before she applies the paint to the canvas. Each work is the result of sketches she first executes. Often she scans those sketches and then draws over the reproductions, establishing many layers, before then projecting the design onto canvas where she reworks or enlarges it in order to achieve the right shape and effect. The outcome is perfectly delineated contours that rhythmically and harmoniously converge to express the state of the subject. Unlike other paintings in the show, this work in particular exemplifies her process and she leaves out the intense palette present in the other paintings, the effect of which highlights its linear qualities. Koak has named the exhibition after this work, signaling to the viewer that the underlying import of the paintings has to do with agency—perhaps foremostly female, self- agency—and an interrogation of control: who is controlling whom? Relating to this Koak asserts, “I think when we’re imagining ourselves as a conglomeration of selves, there’s often the question of who rises up to the surface, which fractal is our true self.” (6)

Koak also plays with doubling and mirroring in several of these paintings. In Dark Corridor (2021–2022), a figure saturated in brick red stands beneath an arch bathed in green light. Outside we see the outline of a tree, suggesting an interior and exterior spatial difference. A second person appears under the arch as well and gazes out at the viewer; however, her upper torso seems to emerge from the waist of the other one, suggesting that they are in fact one in the same. But is it a corridor or is it a mirror? Do we see the frontal reflection of the individual who stands with her back to us or is this another person entirely? Is the light source coming from outdoors or is it merely a reflection from the opposite side of the room? As in other paintings, Koak plays with the light source in this painting, rendering it somewhat elusive. Bathed in light that asserts its presence as an object in space, Koak splits her subject, underscoring the sense of duality within the figure.

In an olive-green painting, Mirroring (2022), a body bends over, again splitting into mirrored subjects at the torso, while in My Teeth (2022) two entangled figures push and writhe against one another. On the importance of duality in her work, Koak surmises, “I’ve noticed that it feels impossible for me to make a show that does not center, in some form, on ideas of duality—and that that duality often has to do with the distinction between ourselves and others, the interplay of that. This show feels as though it’s about merging that duality. That it’s looking at the places where those parts get muddied, where we subtly absorb one another only to become more of ourselves.” (7)

While she was producing this body of work, Koak read the cognitive scientist, Douglas Hofstadter’s book I Am a Strange Loop (2007), in which he discusses how the self becomes a feedback loop, or a subjective construction of disparate experiences that fold back and reflect on our psyches and thus impact the formation of the self. Koak plays with this metaphor in these works, where bodies morph and reflect various psychological states. This is perhaps most evident in Strange Loop (2021), a large-scale bronze sculpture depicting the elegant, elongated bends of three feline bodies, whose curves visually reflect and complement the arcs and bows of the other proximate appendages. In this work, it is difficult to discern where one body begins and another ends, as they all appear intertwined in a fantastical loop, despite the fact that none of the bodies actually touch.

In An Empty Sea (2021–2022), Koak again plays with the weight of light and color as a signifying device of the cultural moment. A bright red curved mirror reflects light from a vermillion sun hidden behind a sheer curtain in a room saturated in cobalt blue. The light of the mirror becomes a strange object in the room, more solid than reflective, that starkly accents the surrounding blue room. In effect, the light becomes another character in the painting behind the pensive figure in the foreground. “I think there’s something about the act of painting
light, of physically representing an intangible element, that gives it the same weight as the depicted physical objects,” Koak has stated. (8)

The paintings Koak has produced for this exhibition are the signs and symbols not only of Koak’s lived experience of the last several years, but also point to a more sublimated reality of the pandemic. About her paintings and the subjects she portrays, Koak asserts, “I can find myself in any of the pieces. Some fragment of myself. A skewed mirror. A version that I felt once. But at the same time I can see each one entirely not as me. A fiction, a part of a friend or loved one, a stand-in for broader society, a historical trope, or an archetype reimagined.” (9) Throughout this body of work, Koak weaves her fabric of human experience for a specific moment in time through her chosen signs and symbols: light, color, individual subjects, interiors, exteriors, mood, gesture, and mirroring effects. As Langer has again noted, “Out of signs and symbols we weave our tissue of ‘reality’.” (10)