In her second solo exhibition at the gallery, Klodin Erb pulls out all the stops of her painting skills. She populates the gallery’s new space with two groups of works that differ in form, but both express the artist’s engagement with the current state of our ecosystem. 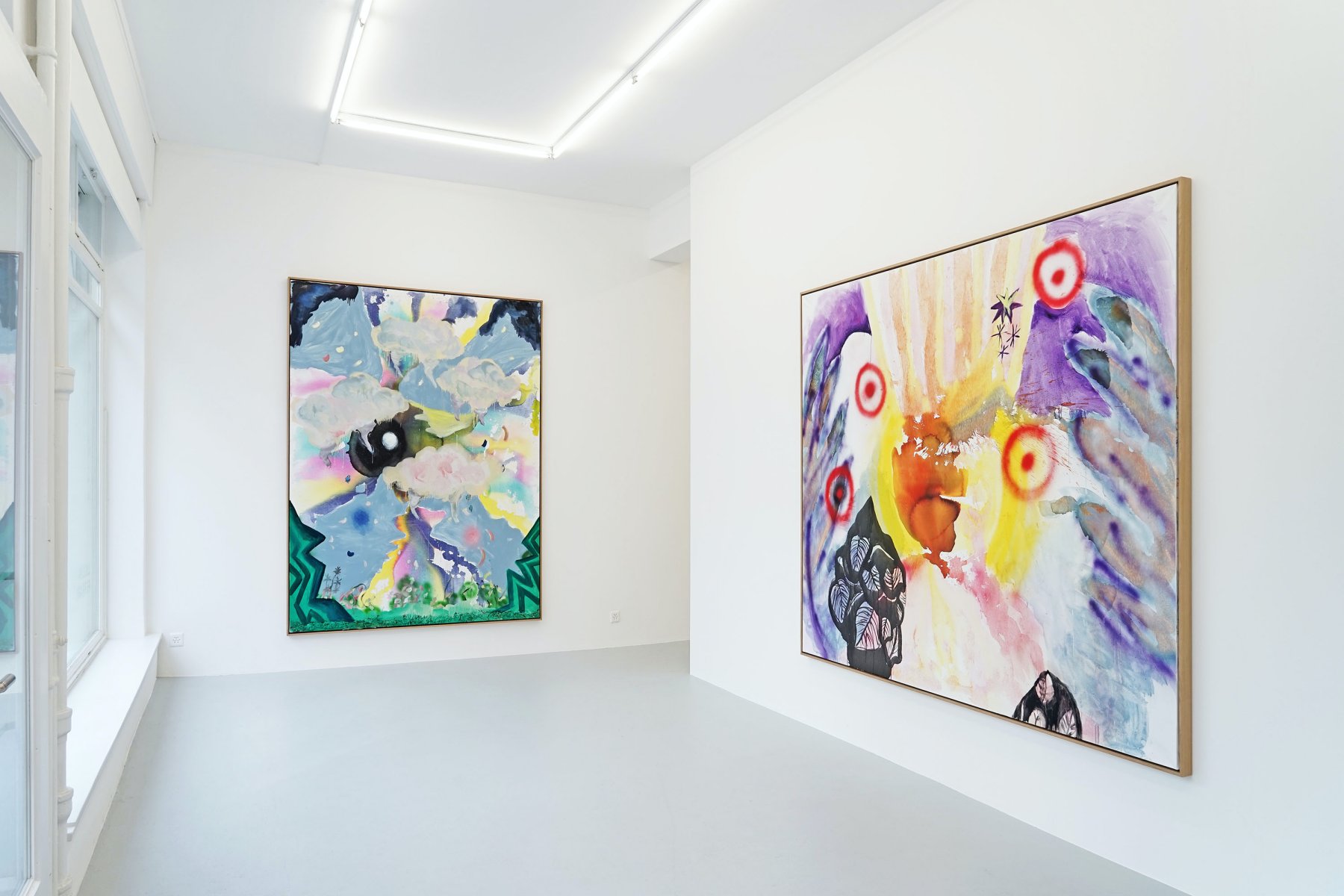 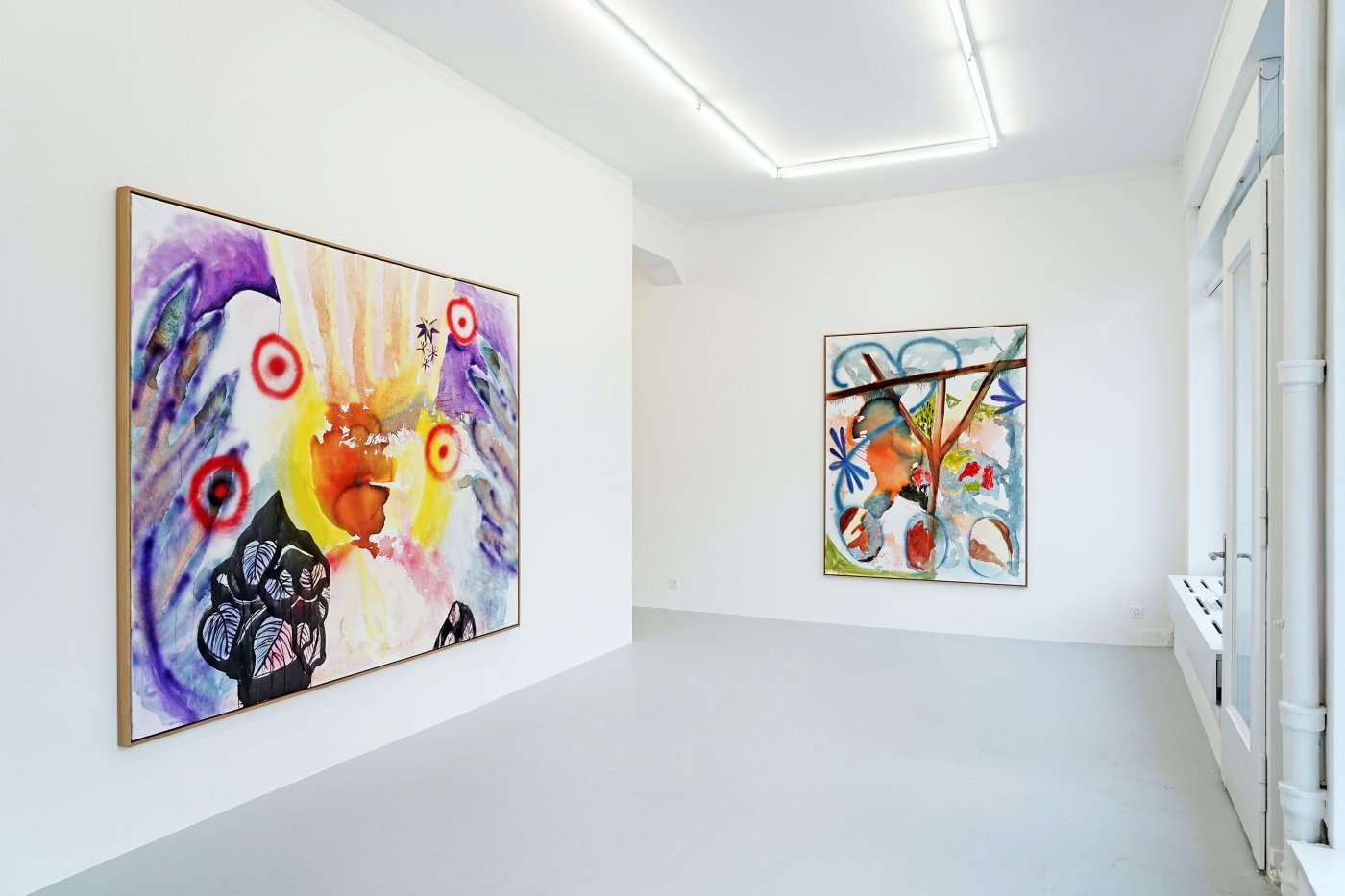 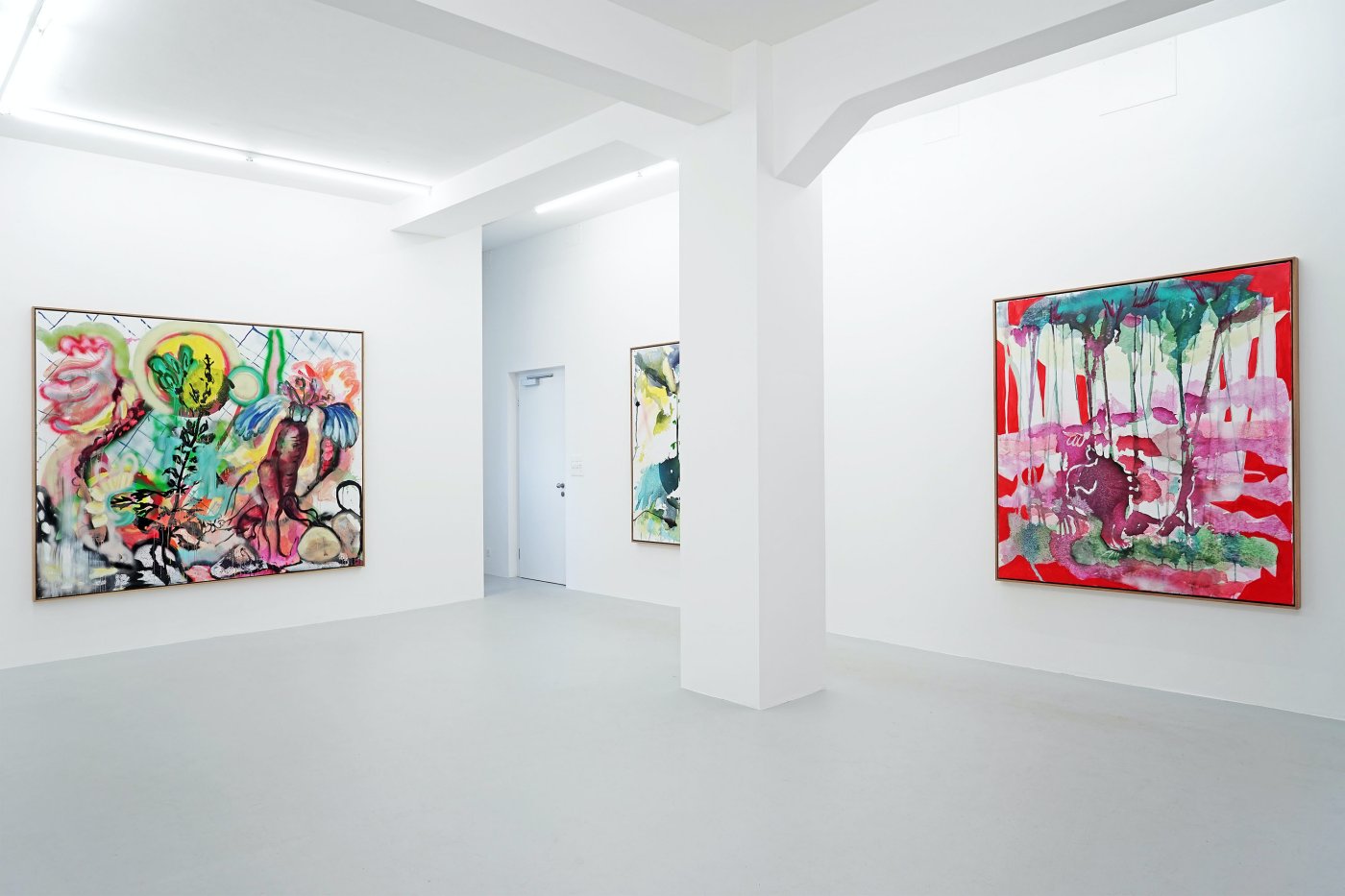 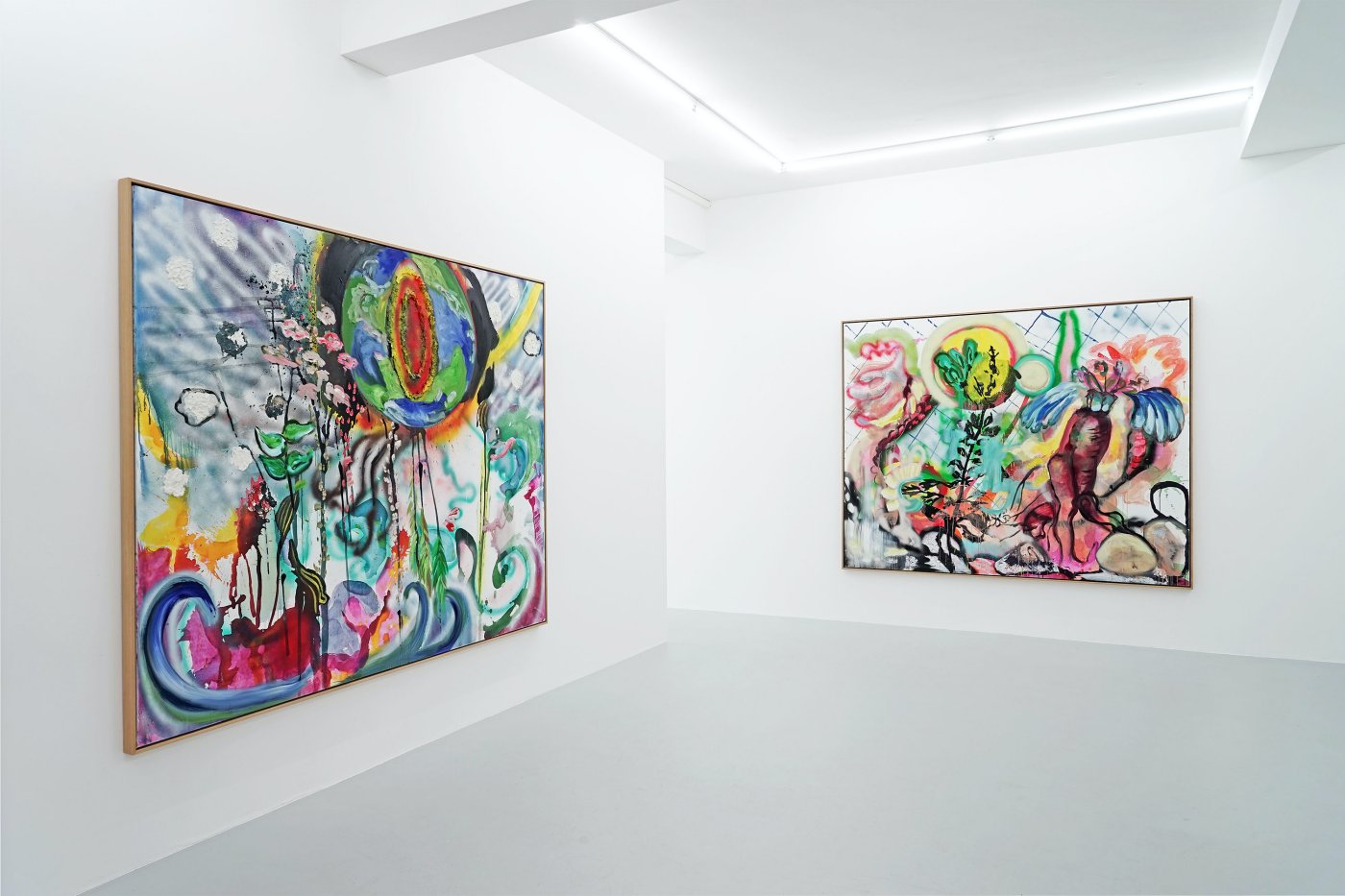 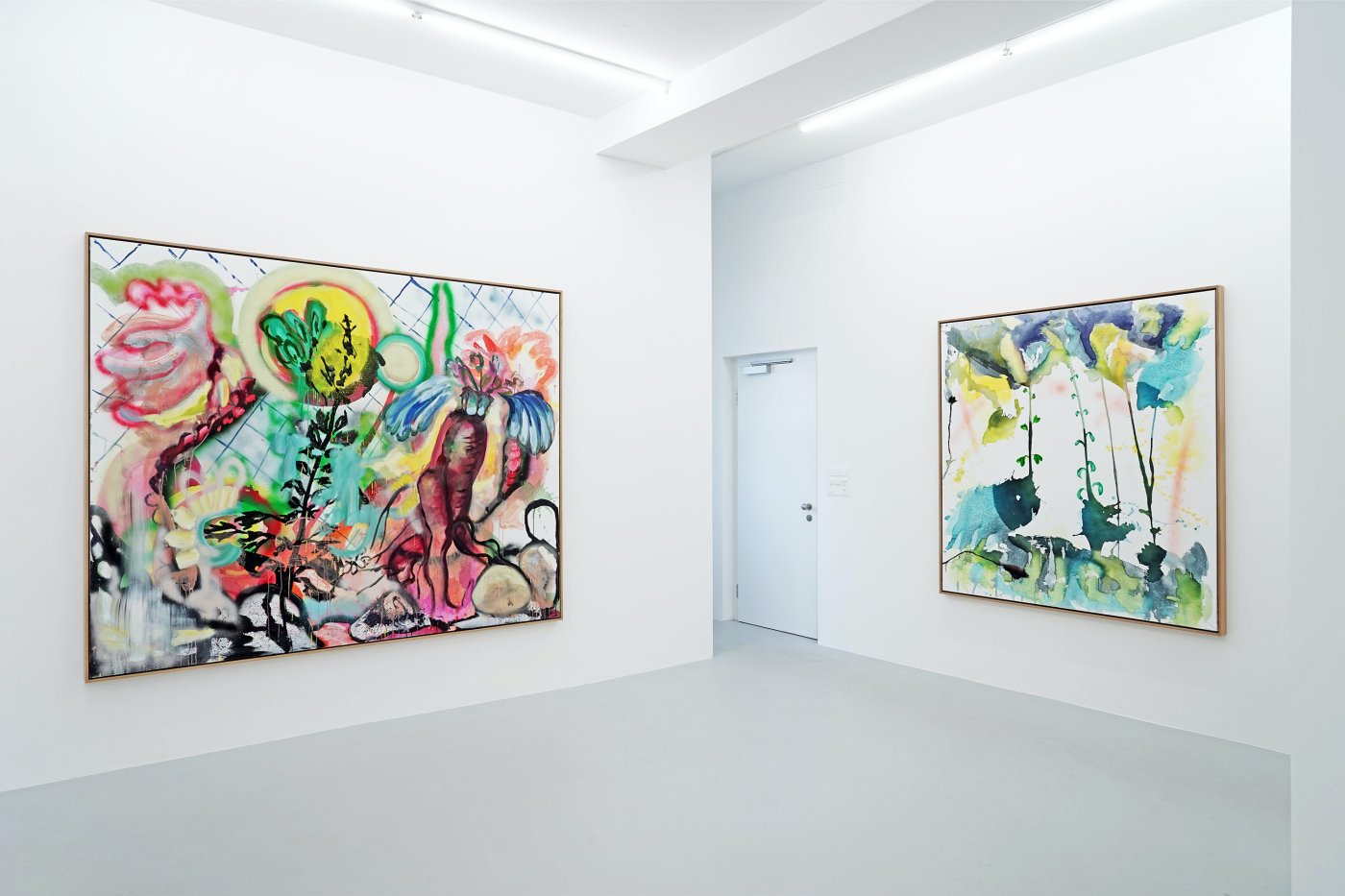 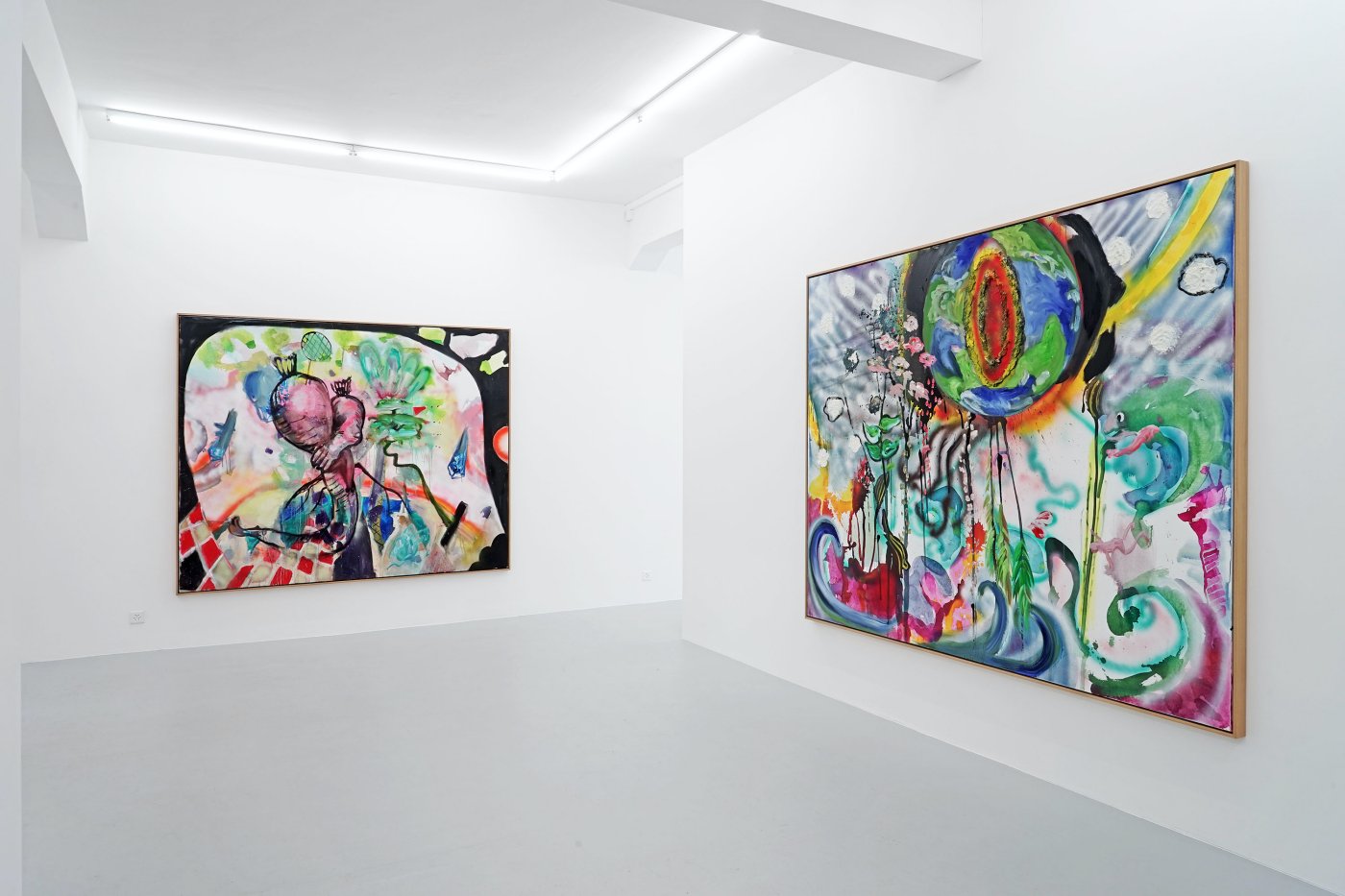 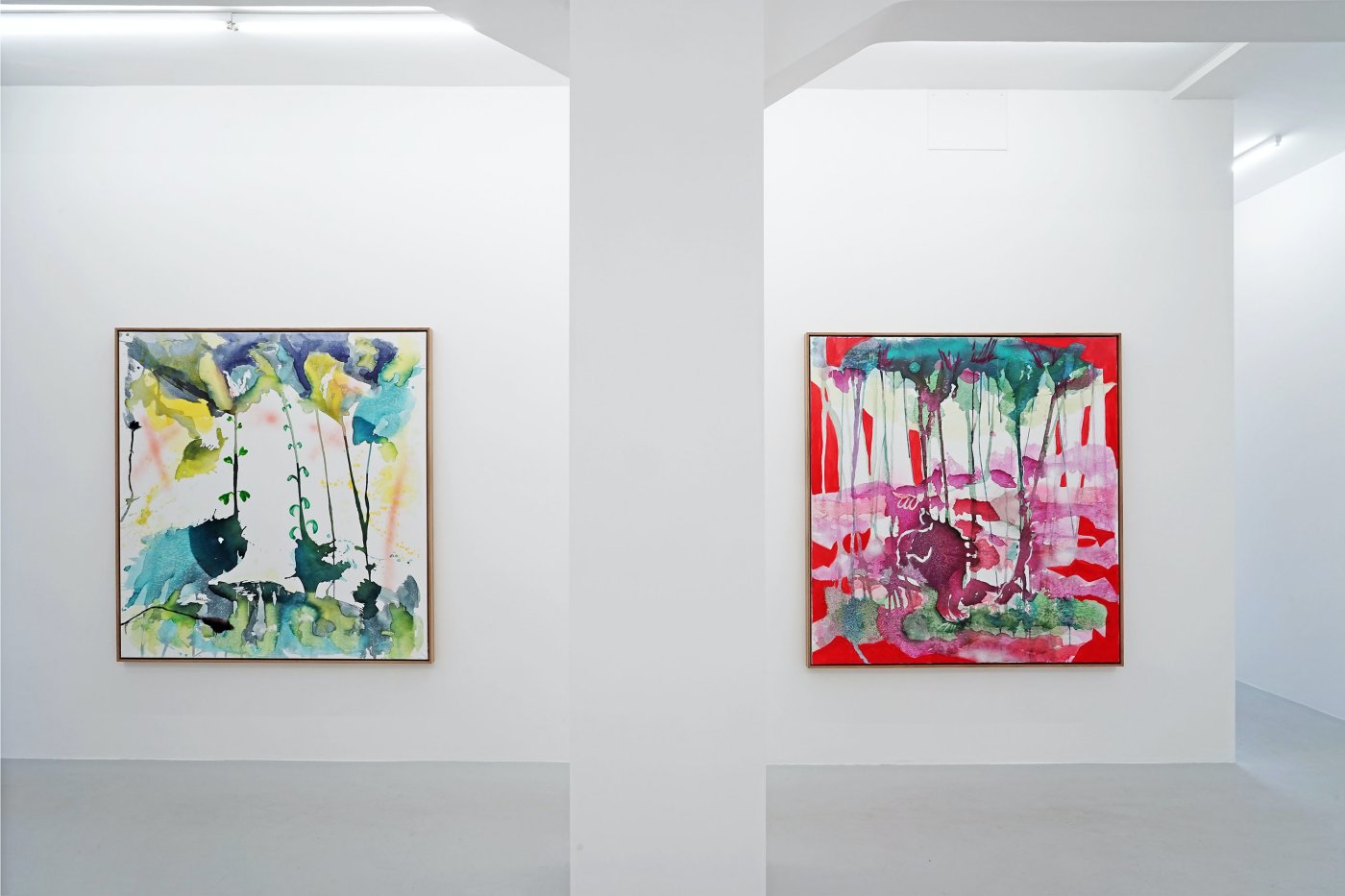 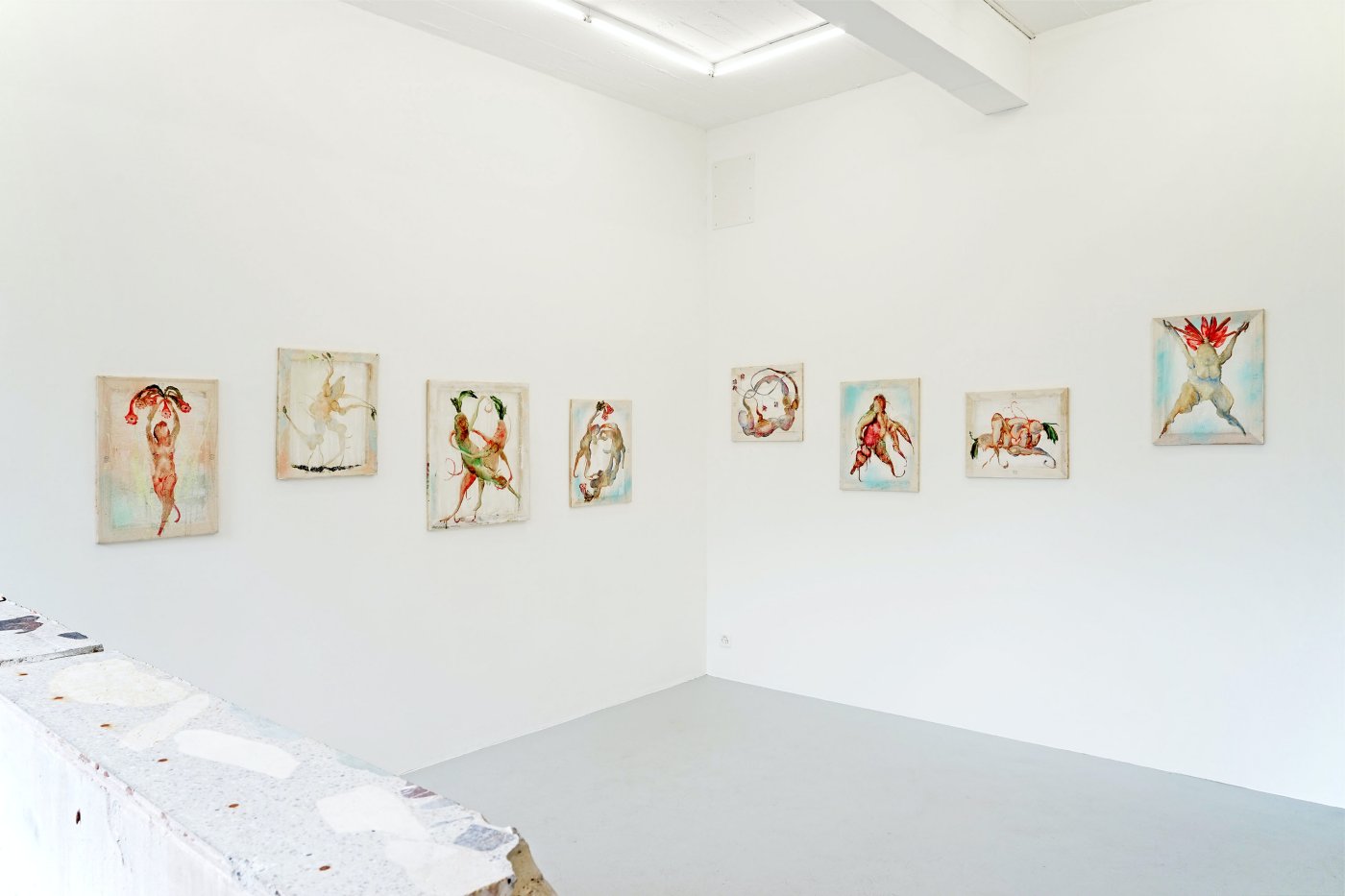 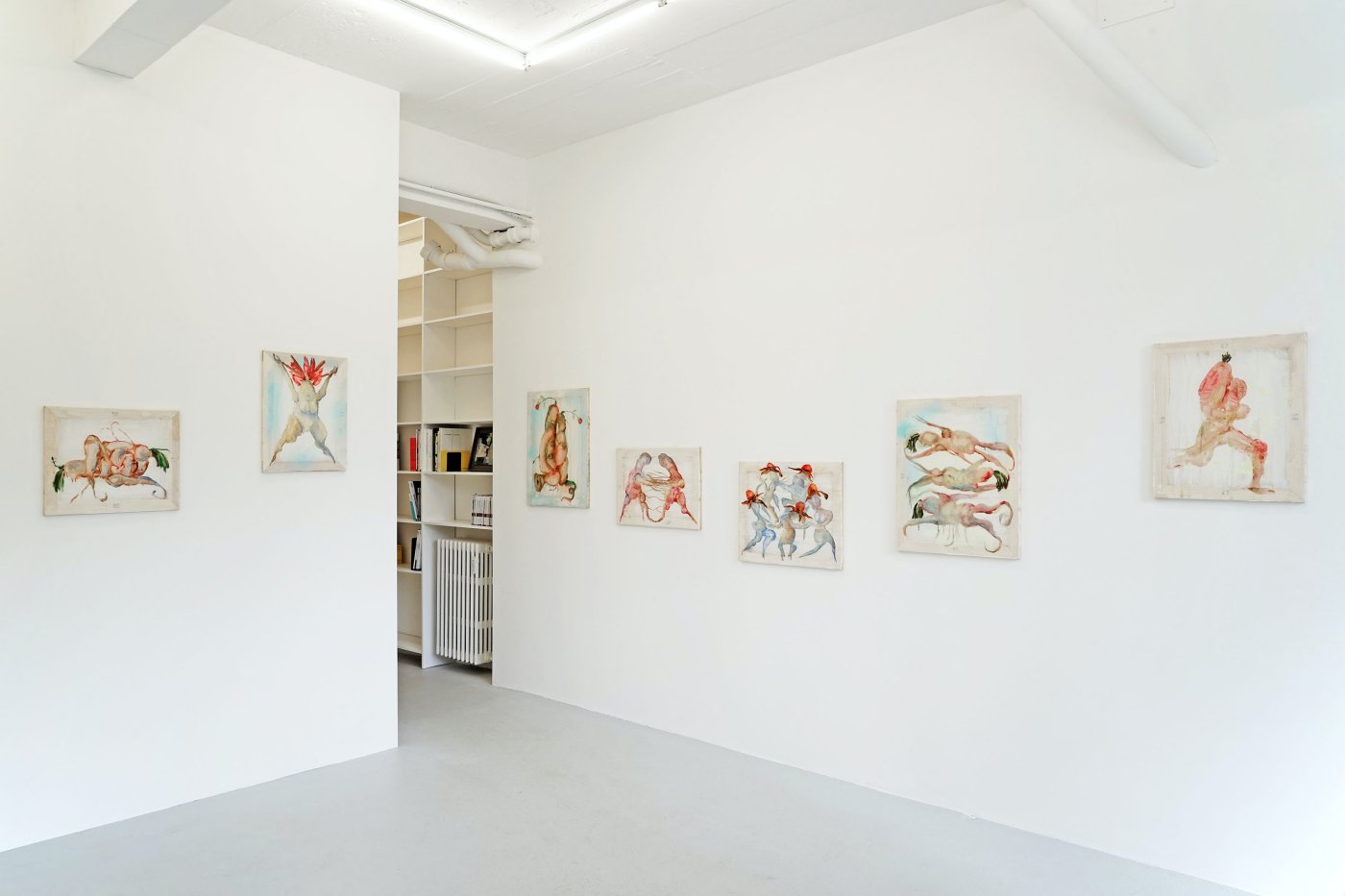 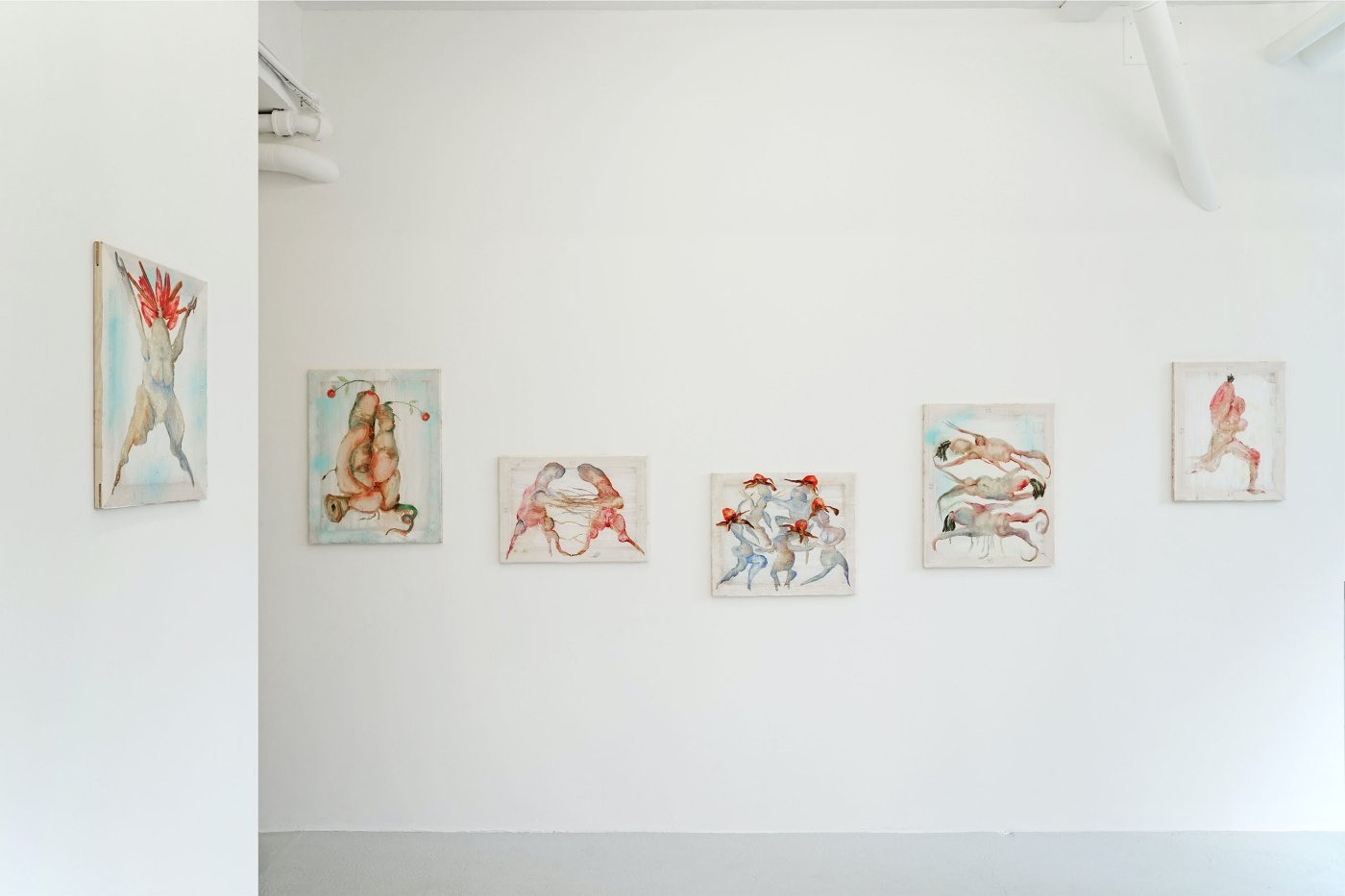 Spread across the front gallery space are eight large-format paintings created in 2020-21, which she describes as events. In the rear garage space she presents a second group of smaller paintings. The ambivalence of creative power and vulnerability is a basic idea of the exhibition, which comes to bear in different forms in both groups of works.

An important topic of the large-format paintings is the landscape. Formally and in their approach, the paintings are based on a mixture of chance and deliberate setting. Klodin Erb tests out the categories of gestural painting in order to then transfer them into other dimensions through deliberate interventions. First, she selects certain colours and pours or paints with them on primed canvases that are already covered on the floor. She then hangs the paintings on the wall and adds elements to the compositions she has begun with precise brushstrokes or spray paints. Then she puts the pictures back on the floor and continues the principles of chance. In this way, she transforms the random into an invention and gives them a direction in terms of content. Inner and outer pictorial worlds complement each other and come together to form this impressive group and installation. Klodin Erb reflects with the means of painting. She searches for answers and presents hope, which manifests itself in the paintings. The paintings captivate with their stringency of content and a rush of colour that refers to irrepressible joy and love of life.

In these new paintings, Klodin Erb questions the common notions of landscape painting and transforms them into new pictorial inventions. In addition to the high art of the eccentric Chinese painter Luo Ping (1733-1799) or the German Romantic Caspar David Friedrich, she also refers to elements of popular art, for example street art with its tags and spray art, but also to pop art and films such as Yellow Submarine. These art-historical references (pop art, street art, Romanticism, Far Eastern painting) are certainly relevant, but even more important are the references to contemporary philosophy: Have we reached a point that marks a change in thinking? Will questions about globalisation, but also about the preservation of our planet, come into focus? Will gender and identity issues be discussed in depth, as is central to the thinking of some philosophers, such as Donna Haraway? Here we should certainly also refer to the French philosopher Bruno Latour, who already spoke concisely about many of the topics addressed in his terrestrial manifesto in 2017. Questions about a holistic world view, as formulated in the Gaia hypothesis founded in the mid-1970s, also come into focus in Klodin Erb’s paintings. With the means of painting, Klodin Erb shows how she perceives the world and at the same time reflects on it. The paintings are events. The artist is both producer and recipient. In the creative process as well as in the reception, Klodin Erb is concerned with the direct, the immediate, the trust in one’s own intuition, which ultimately leads to a vividness. At the same time, Klodin Erb’s paintings are by no means illustrations of theories or views, but pictorial interpretations of their perception and vulnerability in the sense of a personal determination of one’s position, which can make a universally valid claim.

In the back room of the extended gallery, Klodin Erb is showing a new group of smaller works called Forces and Juices, which bundle together questions of the connection between man and nature as if in a burning mirror. Due to their small format, they are particularly well suited to transporting certain feelings. By depicting roots with human forms, Klodin Erb congenially symbolises the connection between man and nature and symbolically depicts the threatening uprooting of man from nature. Klodin Erb developed her own technique for this group of works. She uses Japanese paper, which she applies to a chassis with fish paste and then paints over with emulsion paint. Then she begins the painting process with very fluid, pure linseed oil. Since the paint does not dry but flows, she has to work quickly and display all her painterly bravura. The figures of this holistic approach are amazing, invite a smile and reveal an artistic universe all their own.

All the paintings in the exhibition are direct inventions by Klodin Erb in response to the existing. They open up a new view of our surroundings and contain a metaphorical view of the world by means of overlapping quotations and references of a formal and thematic nature.

Klodin Erb has had many exhibitions at home and abroad. Her works are in numerous institutional and private collections. In 2008 and 2018, major survey exhibitions of her work were held at the Museum Allerheiligen in Schaffhausen and the Kunsthaus Pasquart in Biel, respectively. In addition to her work in the media of painting, drawing and printmaking, she also makes videos (for example The Sweet Lemon Ballad, 2016) and is active as a performer. Klodin Erb lives and works in Zurich and is a lecturer in the Design & Art Department at the Lucerne University of Applied Sciences and Arts.