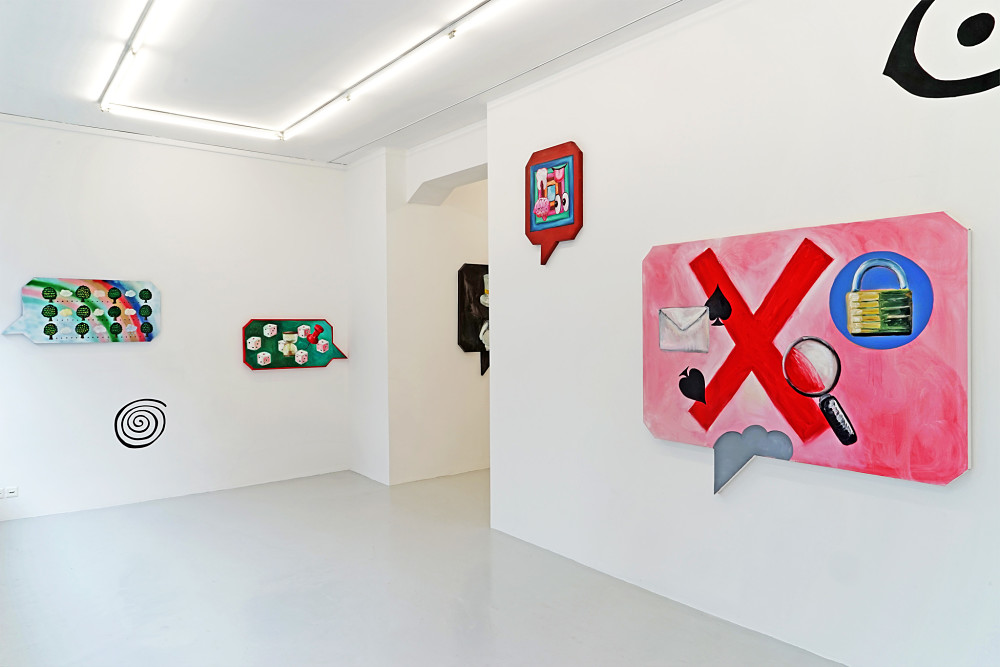 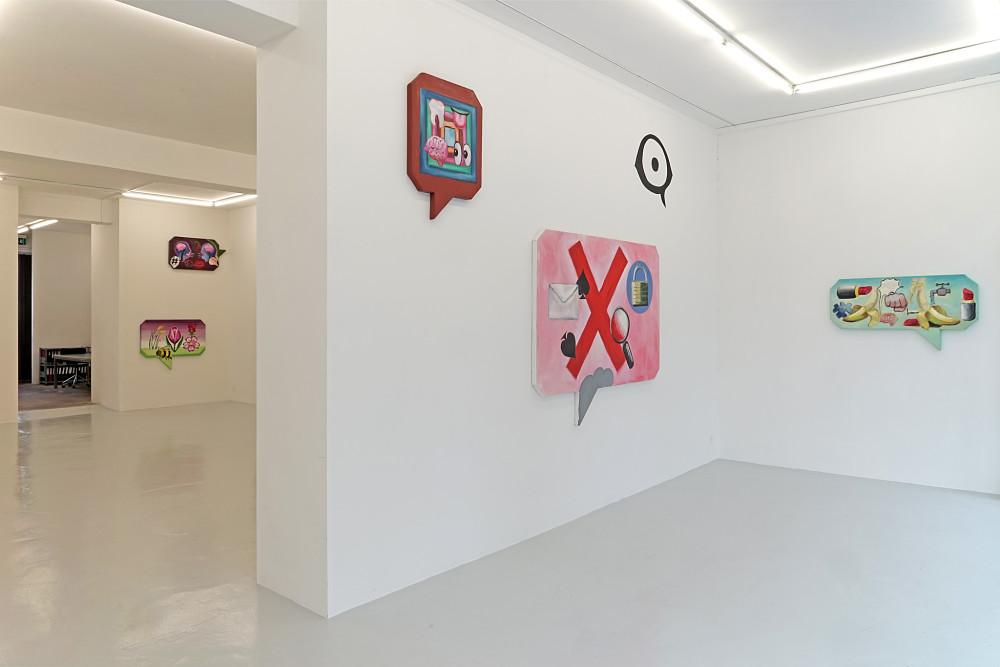 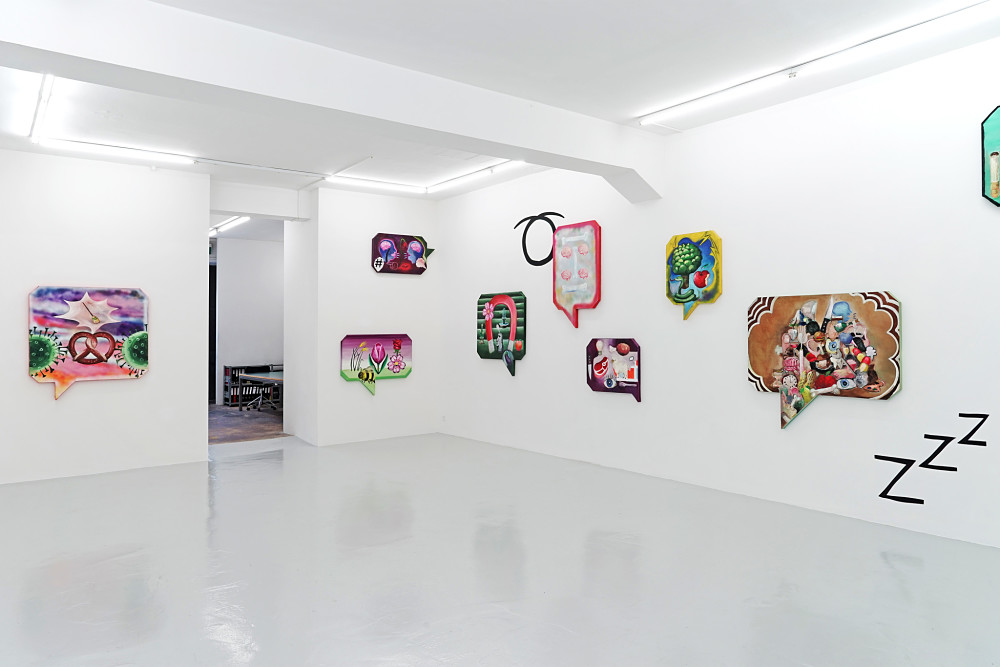 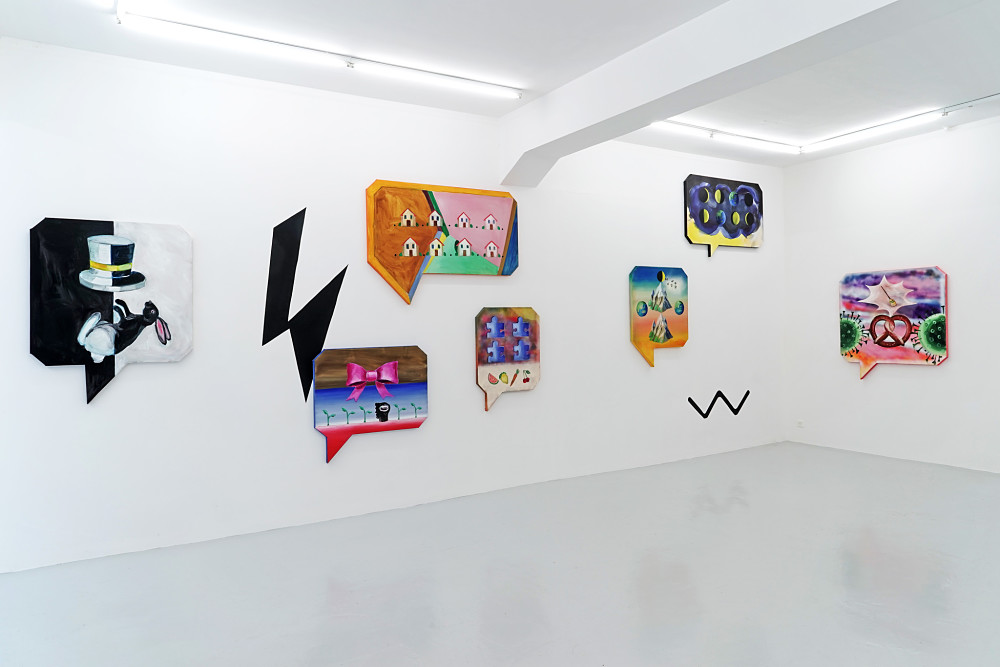 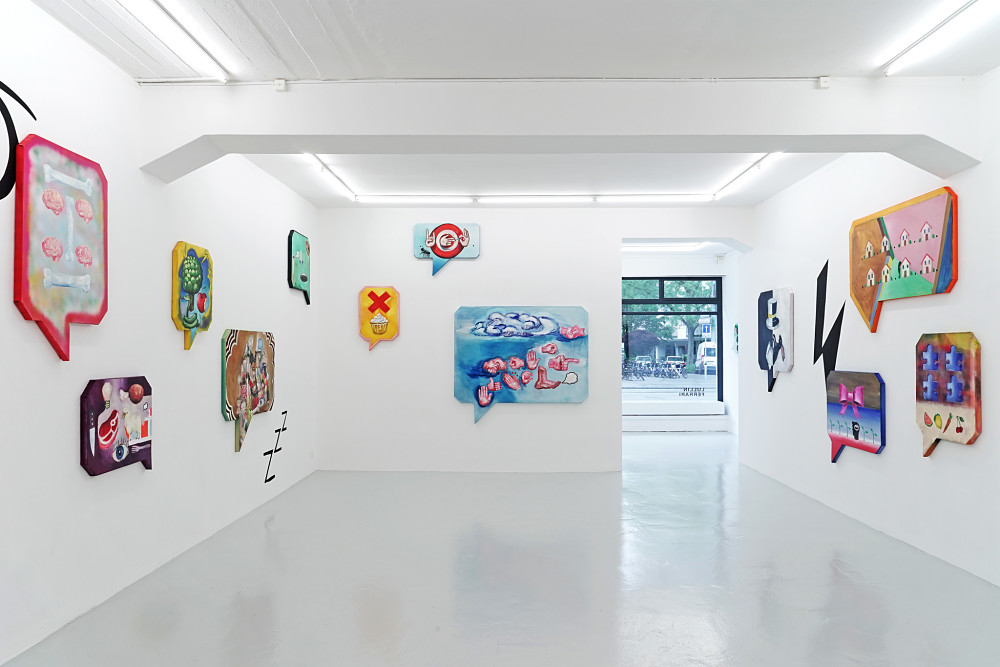 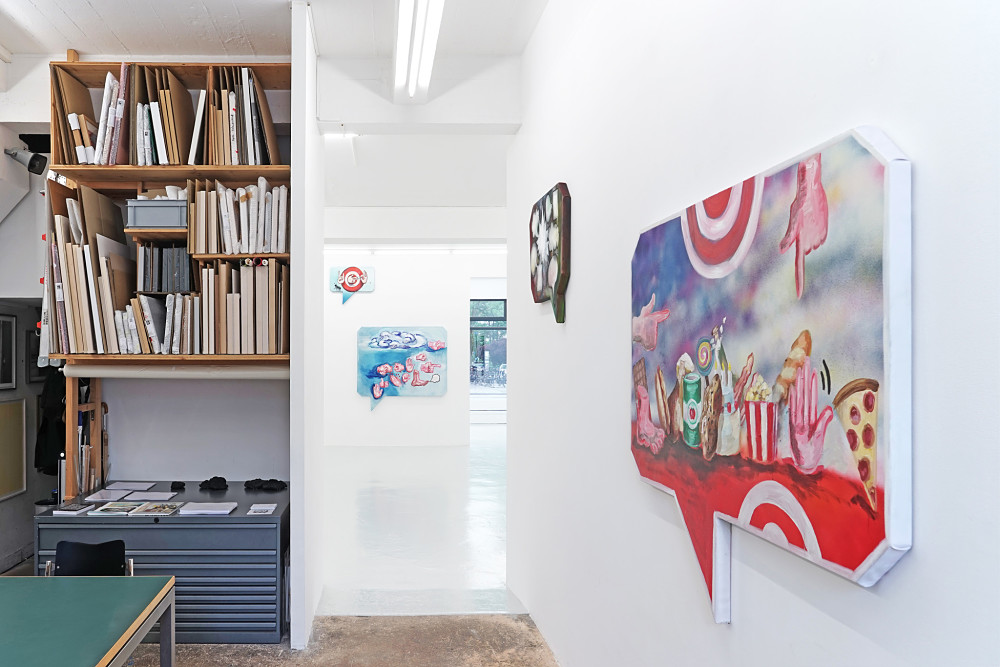 In meatspace, objects have three dimensions. You can generally tell how they are made, and order them in known categories or traditions. Paintings have been part of our lived environment for millennia. Emojis, in comparison, exist in the digital realm and have only existed since the late 1990s, when first programmed into Japanese mobile phones. They build on the success of emoticons, diagrams constructed in type first proposed by computer scientist Scott Fallman in 1982. Emojis are in turn successors of the smiley, the rudimentary face on a yellow disc thought up by designer Harvey Ball in 1960 to promote positivity within an insurance company. Inhabiting text messages or similarly brief forms, emojis garnish text or stand alone, clarifying intent or tone, lubricating typed interactions. Emojis enable users to be yet more succinct: an irradiated yellow stamp on a statement is generally affirmative emotional shorthand. (Unless, let’s say, it’s a brown pile of shit.)

Klodin Erb inserts emojis into the category of painting as if that were their native genus. In one instance peanuts, a knife, hands, ears, eyes, a speaking head, clock, finger, jewel, mountain, pills, artist’s palette, speech bubble, egg timer, wine glass and a heart pile up in an incomprehensible heap that spills towards us, each object divorced from its usual spatial setting. Babel, 2019, of course. Emojis are more widespread than any spoken language; several billion people have devices with which they can employ them. They are, thus, theoretically universal, though in order to make much sense they need to be embedded in a conversation or a message. A canvas, however, offers an absurd context, as painting, particularly in oil, is a slow media and traditionally a framework conveying weighty significance. At the edges of Erb’s speech bubble canvas, the cloud forms reverberate, carrying her cacophony into – nothing.

Let’s look at this from another angle. Erb takes the genre of painting and populates it with contemporary elements. Trees and clouds are staple ingredients of landscape painting, and in Neue Landschaft (New Landscape, 2018) the trees are studded in a grid. Tree, cloud, tree, cloud, tree, cloud, tree – they struggle to cohere, held in check by the cadence of digital typesetting. A final cloud, weeping rainy tears, remains as lonely as the other ranked digital pawns. This world has a distinct, stuttering rhythm and its own kind of pathos, constantly teetering between sarcasm and sincerity. Another landscape, Over the Top, 2019, features two disconnected mountains, two earths, as seen from space, on either side and a crescent moon above, which voices signals that are falling into thin air. Its cuteness is reminiscent of Japanese pop culture, maybe by extension of the Asian tourists that journey en masse to Switzerland to view unspoilt alpine peaks too. Now mountains, moon and our planet as a whole have been hung out to dry by phone users, as we avariciously churn up the earth’s crust to source tin, lithium, manganese, silicon, antimony, copper, gold, silver, tantalum, platinum and palladium and make more smartphones. Soooo herzig.

It’s silly, perhaps, to entertain the trenchant commentary in Erb’s emoji landscapes. Nobody mistakes an emoji tree for a real tree. These are coded personal statements. Autobiographical. Self-portraits. Take Bones & Brains, 2019, a pink-edged face-like arrangement of three bones and four oddly fleshy brains upping the pastel quota. A succinct statement that a feminine subject is applying herself to challenging mental endeavour – at least it is in German, in which Knochenarbeit, bone work, means hard graft. In English, though, to bone is to fuck. Who’d have thought that this universal language could go wrong?

Considering the affective potential of emoticons, media researchers Luke Stark and Kate Crawford note their ‘conceptual plasticity’ – enabling both ease of use and easy confusion. ‘Emoji help us cope emotionally with the technological platforms and economic systems operating far outside of our control, but their creative potential is ultimately closed off,’ they write.* (And though emoji may humanise a digital environment, they also enable businesses to commercialise our emotions.) Klodin Erb’s paintings encapsulate the creativity this new form allows, illustrating the many sub-genres of conversation that have emerged, the playful use and mis-use of such seemingly innocent graphics. Her pictures underline a shared desire to communicate in a personal and nuanced manner – and the poverty of emojis as a means of doing so. They are limited in range; their naïve simplicity allows them to be applied indiscriminately, ignorantly or dishonestly; and no matter how well-meaning a user is, the glib, shiny surfaces of emojis are masks repelling attempts to see what truly stands behind them. To quote Janelle Monáe: ‘Emoticons, Decepticons and Autobots, who twist the plot?’