In a large solo exhibition, Walter Storms Galerie is showing impressive, large-format photographs by Klaus Kinold, one of the most important architectural photographers of our time. Whether it is buildings by Walter Gropius, Le Corbusier, Mies van der Rohe, Frank O. Gehry, Richard Meier or Carlo Scarpa, Klaus Kinold has documented them almost all. For this exhibition, he portrayed the German Pavilion, built in 1929 on the occasion of the World’s Fair in Barcelona, and the Tugendhat House in Brno, completed one year later. Both are among Mies van der Rohe’s most important buildings in Europe and are milestones of 20th century modern architecture. 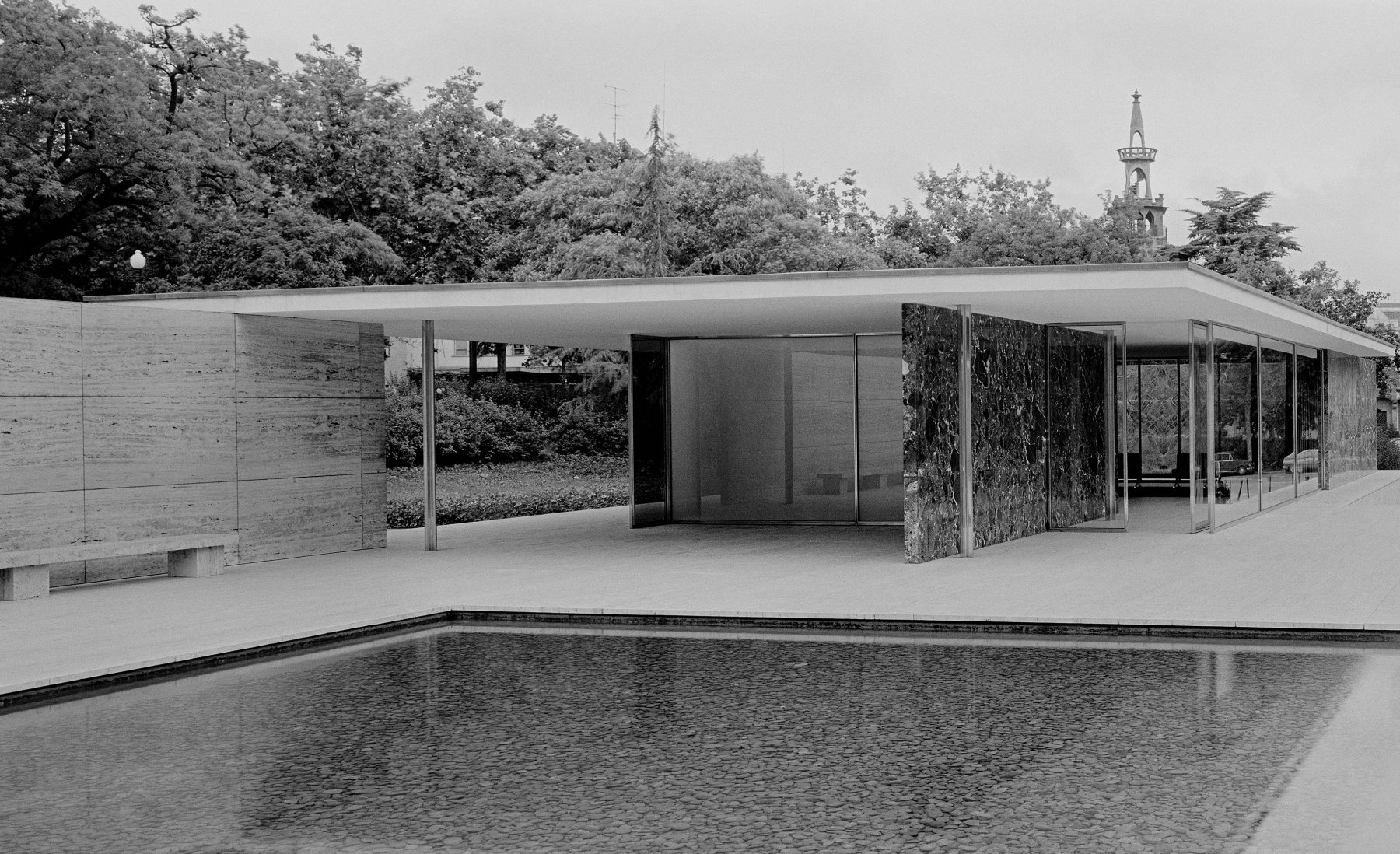 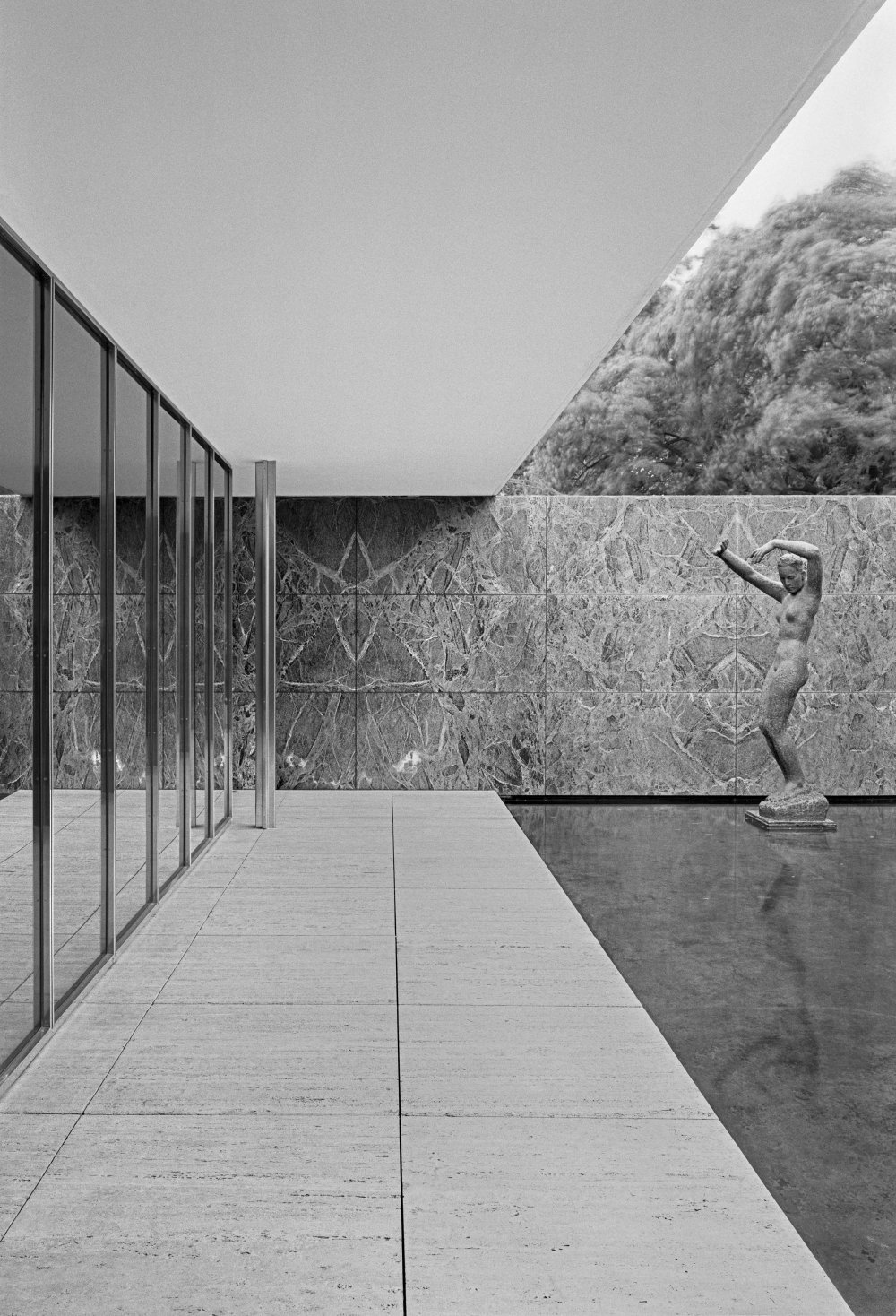 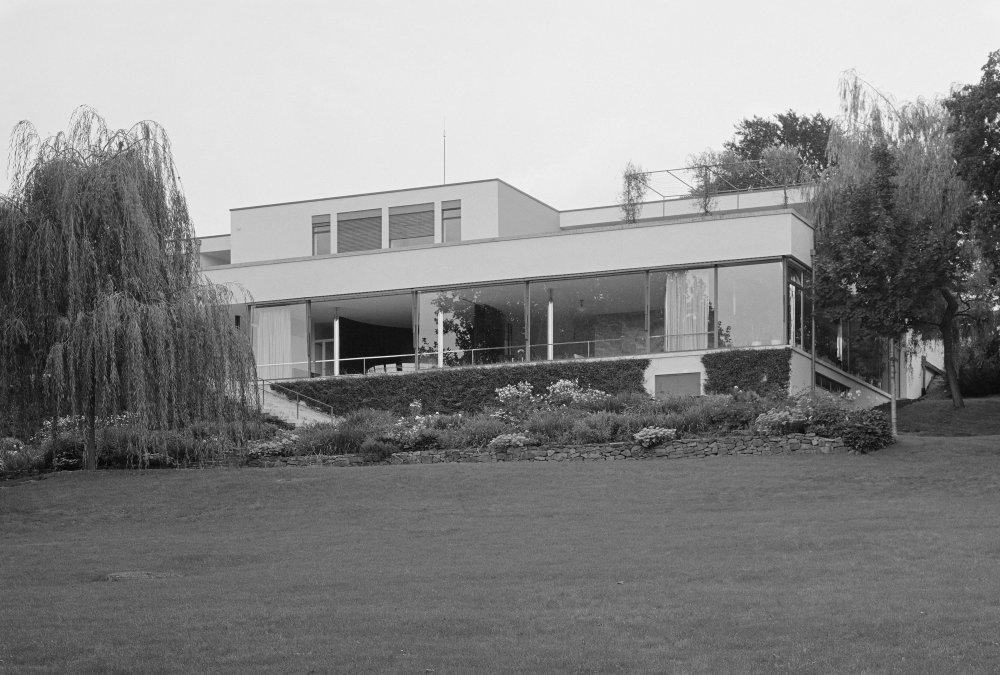 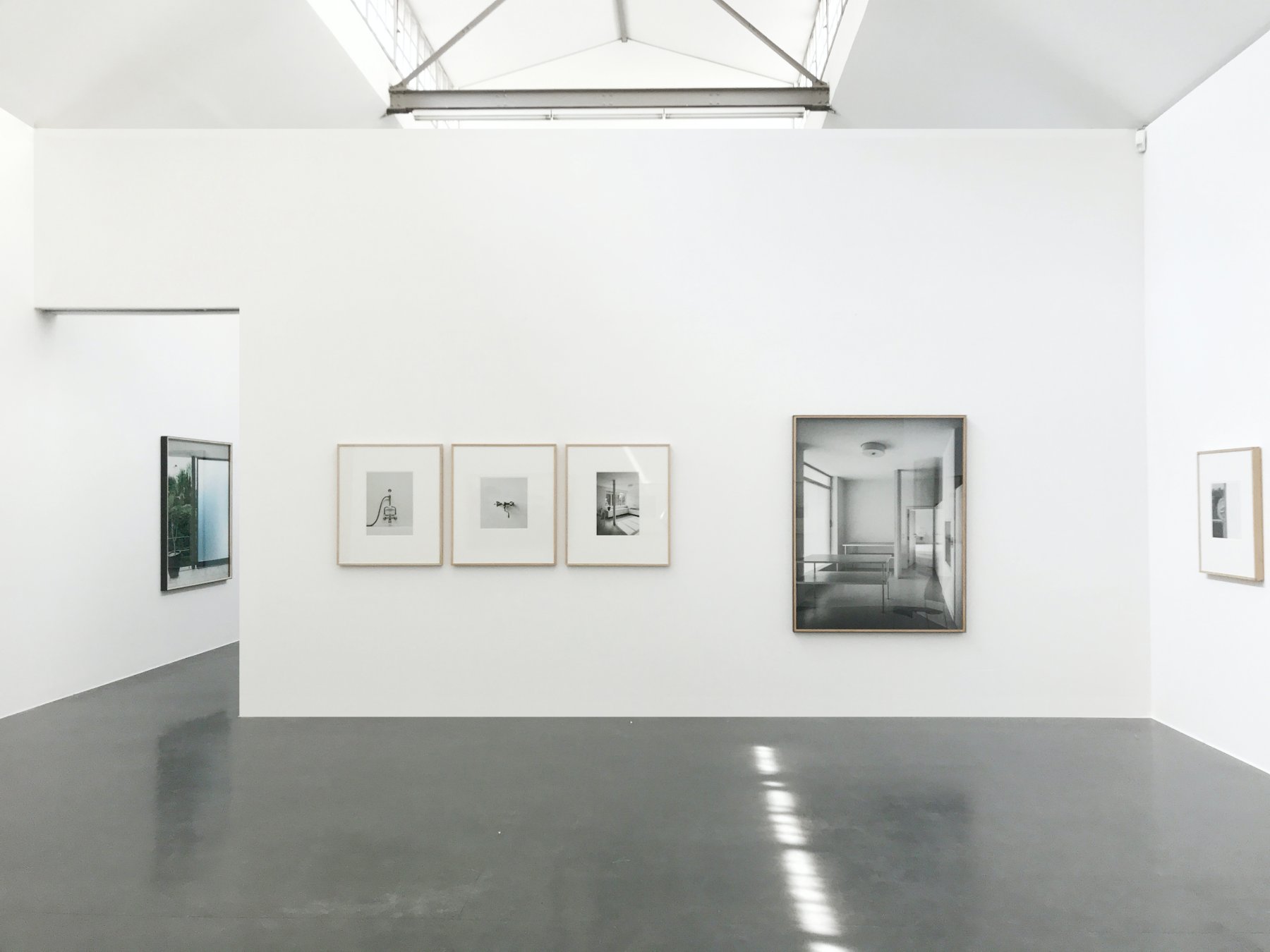 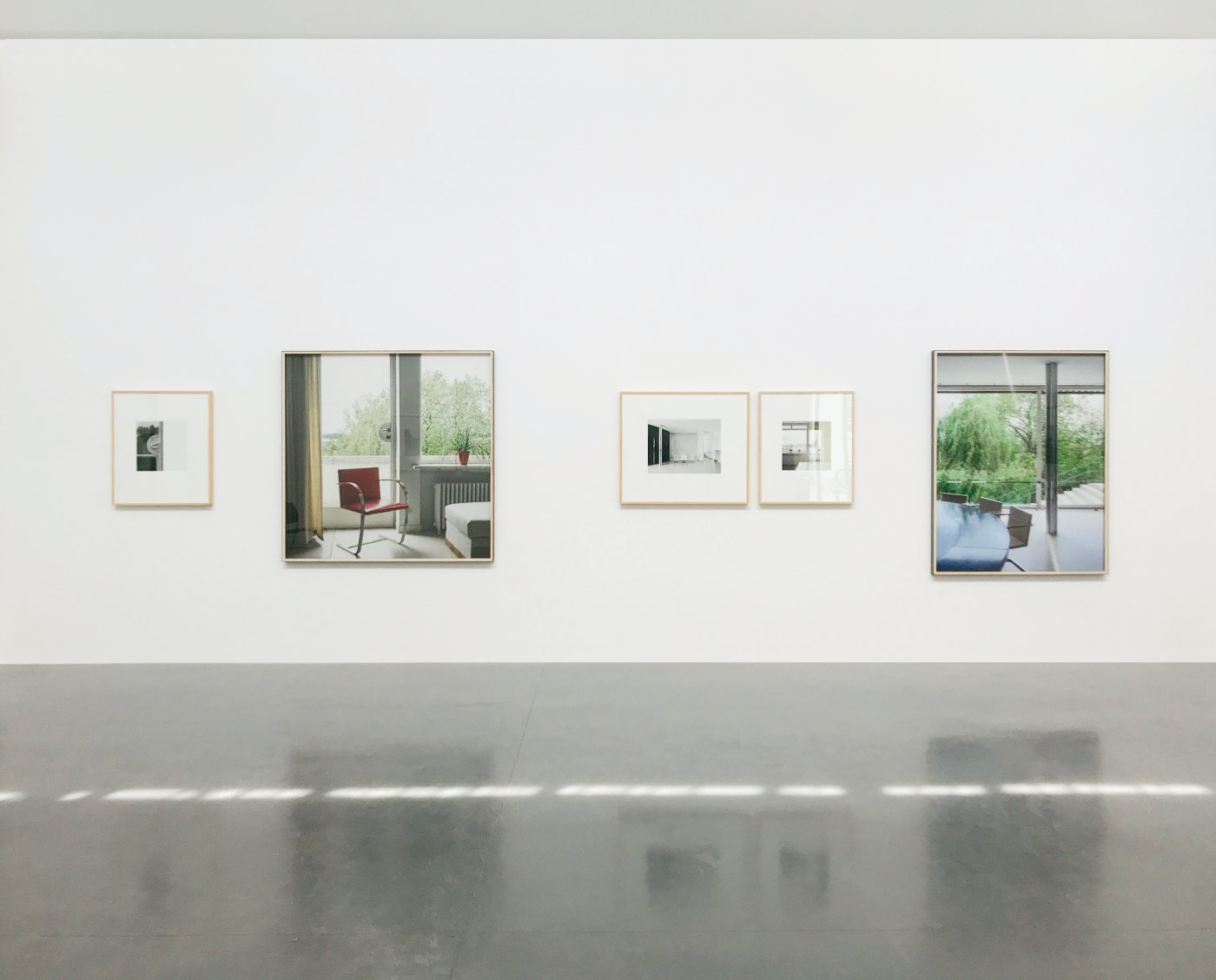 The German-American architect Ludwig Mies van der Rohe (1886 – 1969), one of the outstanding representatives of the “Neues Bauen” architectural movement, achieved worldwide fame as director of the Bauhaus in Berlin and as a teacher at the Illinois Institute of Technology (IIT) in Chicago. The Barcelona Pavilion he designed was dismantled at the end of the exhibition and only reconstructed largely true to the original on the occasion of the architect’s 100th birthday in 1986. The Tugendhat House is a residence built from 1929 to 1930 in Brno, Czech Republic, according to van der Rohe’s plans for the entrepreneurial couple Fritz and Grete Tugendhat, parents of the German philosopher Ernst Tugendhat and the art historian Daniela Hammer-Tugendhat. The house was extensively renovated for two years starting in 2010 and was restored to its original condition. Since 2012 it shines in its old splendor and is open to visitors again. In 2001, it was declared a UNESCO World Heritage Site.

Klaus Kinold succeeded in portraying both buildings in precise photographs. The photographer, who was born in Essen, always saw himself resolutely as a service provider, a skilled craftsman, a translator, transferring one medium, namely architecture, into another, namely photography. In his preferably black-and-white photographs, he committed himself to a self-chosen sobriety, a pictorial language that excluded everything subjective, expressive, and emphatically artistic, because it recognized and exhausted the aesthetic possibilities of strictly documenting photography.

“Architecture,” Ulrich Weisner, Director of the Kunsthalle Bielefeld until 1994, once told him, “can be photographed differently, but not really better.” Kinold dealt intensively with each building before documenting it. He first studied all the details before he began to implement them…the structure, the aesthetics, the materials, the construction. It was important to him that his photographs were clear, objective, rational and factual in their presentation, excluding any _ self-interpretation, staging or alienation. And this was also his often quoted guiding principle: “I want to show architecture as it is”.*

Klaus Kinold (1939-2021) studied architecture at the Technical University of Karlsruhe under Egon Eiermann from 1960 to 1968. After graduating, he opened a studio for architectural photography in Munich. In the early 1980s, Kinold began to focus intensively on panoramic photography, especially the work of two architects, Hans Dollgast and Rudolf Schwarz, whom he held in high esteem because they took a rather conservative approach to their architecture. For more than 25 years Kinold was responsible as editor and illustrator for the Swiss trade publication KS Neues, which presented buildings made of sand-lime bricks. From 1987 to 1996, he held a lectureship in photography at the State Academy of Fine Arts in Stuttgart.

In 1983, Klaus Kinold had his first solo exhibition at the Rudolf Kicken Gallery in Cologne. In addition, his works were shown in numerous solo exhibitions, including the Triennale in Milan (1988), the Kunsthalle Bielefeld (1993), the Neue Sammlung, Munich (1995), the Kunstverein Ingolstadt (1996), the Haus der Fotografie, Hanover and the Neues Museum in Nuremberg (2001). In 2009, the Pinakothek der Moderne in Munich dedicated a comprehensive retrospective to him. And from 2019 to August 2020, the Museum DKM in Duisburg presented the exhibition “Architecture through the eyes of the photographer”. It documented the works of architects Carlo Scarpa, Rudolf Schwarz and Hans Doéllgast and referred to a series of architecture books conceived by Kinold and published by Hirmer Verlag.

* From an interview with Ulrich Weisner in the exhibition catalog Kunsthalle Bielefeld, Richter Verlag, Dusseldorf, 1993