Perrotin presents Flora and Fauna, a solo exhibition by artist Klara Kristalova, organized in the gallery’s New York space. The following essay was authored by writer and curator Osman Yerebakan after chatting with Kristalova from her studio in the hinterlands of Sweden. 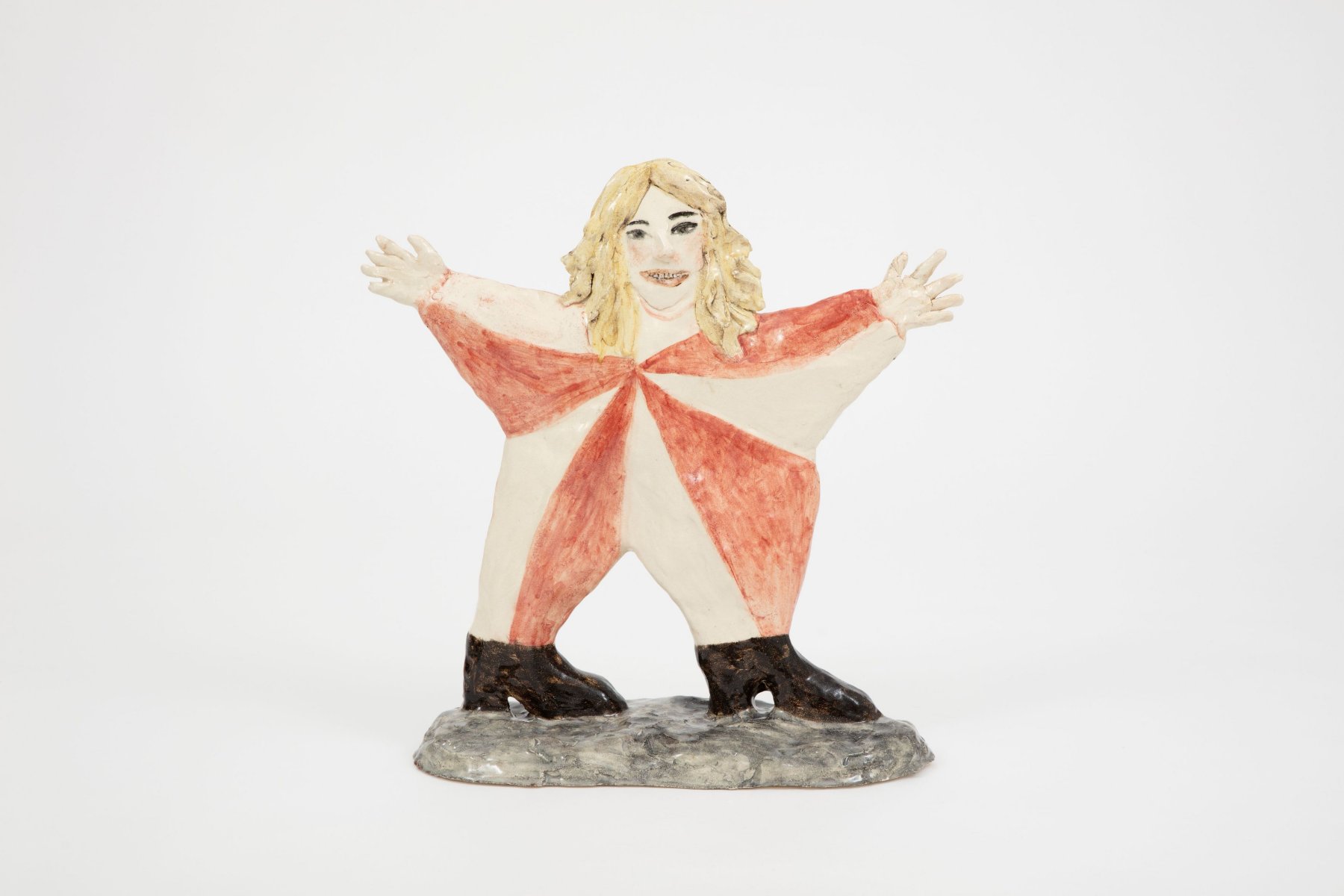 Let the horse girl lead the way and the mouse man show the door. Then, the limbed tree will take the first step. The stage is set in Flora and Fauna, Klara Kristalova’s second New York exhibition of sculpture and drawing with Perrotin. The roles are cast and characters are entered; the make-ups are of glaze, the expressions, in stoneware. The artist is a ringleader, a conductor of dispositions in an autumn-breezed sapling- cast land. Figures—tens of them—claim their positions on the plinth, painted in blue-gray, a stage for a stillness that abuts eruption.

Situated across the gallery, Kristalova’s stoneware sculptures are dens of emotions, each figure traveling between senses ecstatic and indifferent. They altogether form a sea—a placid one, yet eager to roar— waving up and down in height and feeling. Those feelings refuse to inhabit the bodies but rather linger and swiftly desert. As petite as less than nine inches or grand up to almost four feet, they are both protagonists and observers, each possessing their being with a distance to the other’s.

Kristalova’s sculptures are born out of the artist’s four kilns at her studio in Norrtälje, one hour outside of Stockholm. Once born, they encounter the surrounding flora and fauna in the Nordic forest; the realization soon follows: their leaves are akin to those of the trees’, and so are their branches and flowers, and they’re animals, too. A nude woman is awash with leaves and branches in Spaljekvinna (2022), dressing the brittle arms like veins inside her skin, outer life lines that shield and govern. The woman in Still here (2022) is taken over by a tree that creeps all over her head. She is the shrub, a root grown out of the damp earth into a ceramic bust. Beauty (2022) has a blossomed face, once a bud that later revealed its blue flower; layered robust petals host a face in their heart. The expression is immediate but aloof, not unlike the rest of the body perched on the edge of the pedestal with one knee up. Casual like a Sunday morning, the posture has storminess, too, perhaps a denial of the cliff under its legs.

Against the baked clay’s firmness, Kristalova renders her sculptures’ inner potentials malleable. Living through dramatic seasonal changes in the woods—from the summer’s dense heat quickly into a long winter— seeps into the the artist’s figures. Similarly, they are joyous and placid, carefree and pensive, wearing their emotions like layers of clothing. Youth is gifted to many, along with its whimsy and boredom; the sculptures don ennui but they could instantly strip and put on bliss.

Stuck, they each contemplate the prevalent emotion, whilst hoping for a change, braving its unknown. The courage perhaps stems from their hybridity, of animal and human and of earthly and surreal. Stargirl (2020) is a blond-haired star fish, with a cheerful face in lieu of her fifth appendage. A pair of legs hold her shoe-wearing feet and other two her hands.

The moment of transition is critical in Kristalova’s amalgams, from the human flesh to a beastly fur or to crusty earth. The porcelain’s glaring flamboyance smooths the otherworldly metamorphosis. Like a moth journeying into a new life, Goodbye butterfly (2022)’s girl has gained her silky wings—time to spread, flap, and glide. In Winged (2022), airfoils are more generous, large like those of birds of prey, but the girl is nothing like a hunter, but rather lanky and petite, not decisive on how to utilize her freedom yet.

Kristalova, who lives with her husband and three dogs, calls the human inside the animal and sculpts people beast-like. Horsegirl and Expectations (both 2022) are horses with young girl eyes, deep and seductive, narrative of a secret we must near to hear. They both have lush manes dormant in ceramic’s soundness, but we are free to imagine. In fact, Kristalova’s sculptures are an invitation to daydream, turn the imagination’s unknown corners and get lost in its winding paths. The gentle ink drawing Doggirl has a set of eyes shared by a canine and a young girl; the woman in the watercolor Woodwalker (both 2022) has a tree skin with growth rings adorning her body and branches sprouting from her hand.

Trio of you is about a physical impossibility, as well as The Gaze (both 2022). The first bust’s woman has three faces smeared into one another but still distinctly separated, like a rapidly moving head’s trick on the eye; the latter’s unreality is bodily, in the impossible contortion of the woman’s neck towards her back. She sees us, but we are terrified of her pitch black gaze. Kristalova’s colors are raw and baked, a result of high fire stoneware’s yielding of dense hues. Surprises are welcome: they are the innate beauty of ceramics. “It’s dynamic, a way to make three- dimensional drawings which started out as a protest when the medium was not commonly favored,” says Kristalova. “As someone who works alone at the studio, I need the ceramic’s surprise element when the glaze comes out of the kiln.” The awe in Twins (2022) depends on movement, our full journey throughout the bust of a woman who hides her dual on her back, her thick hair tangled into her other. Like the twins, Kristalova’s sculptures are twofold—spectral actors in tales with manifold endings and many paths to reach them.