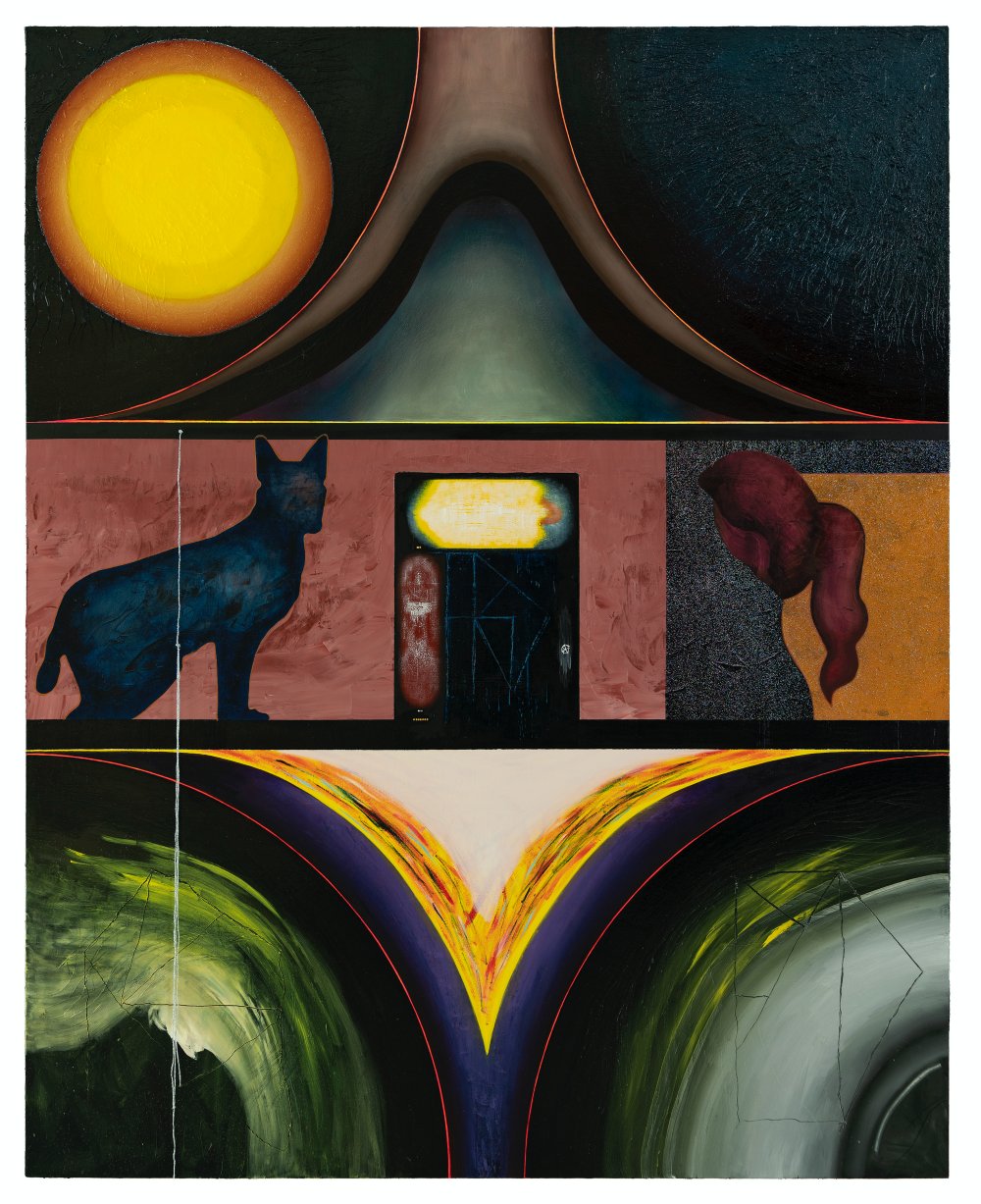 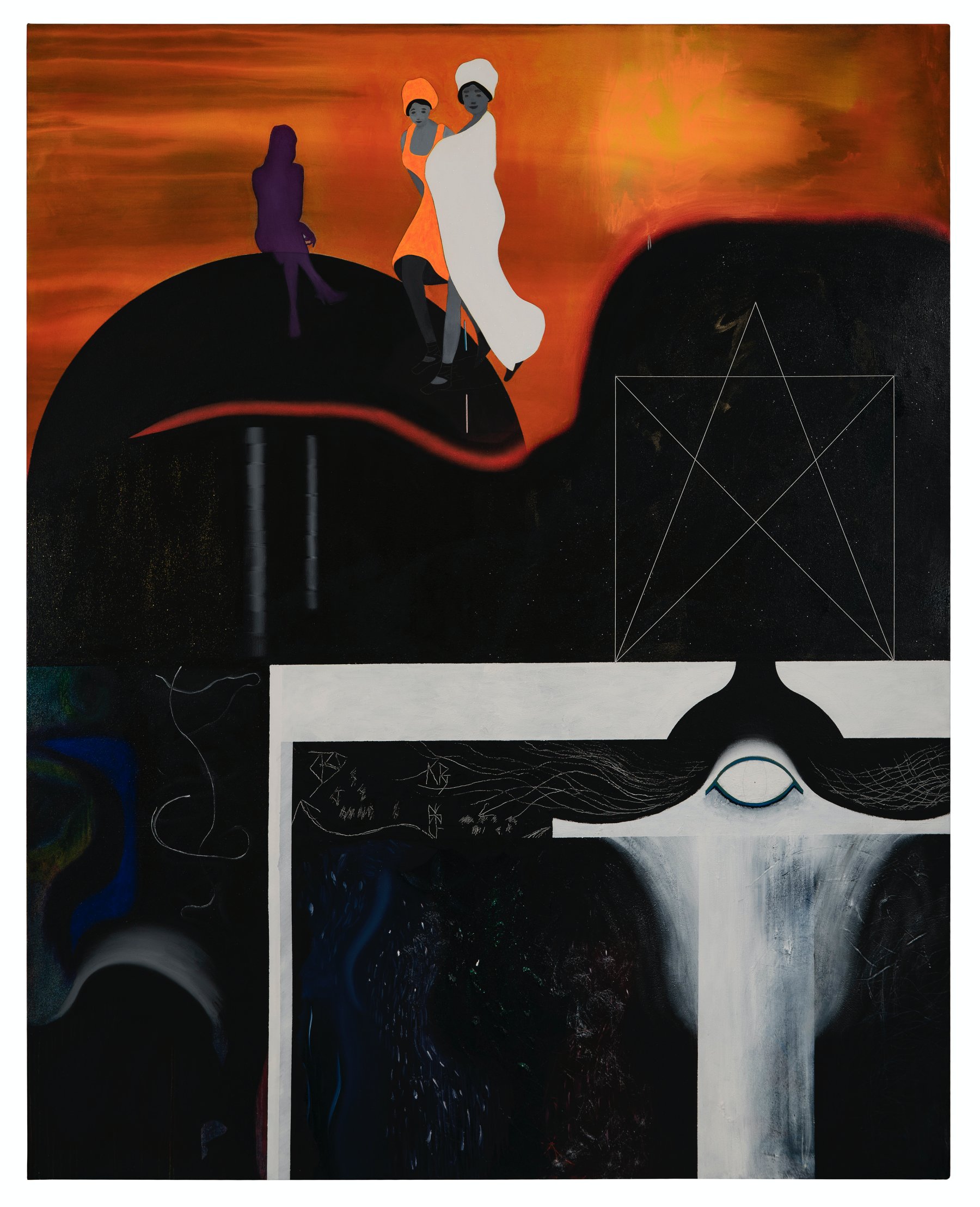 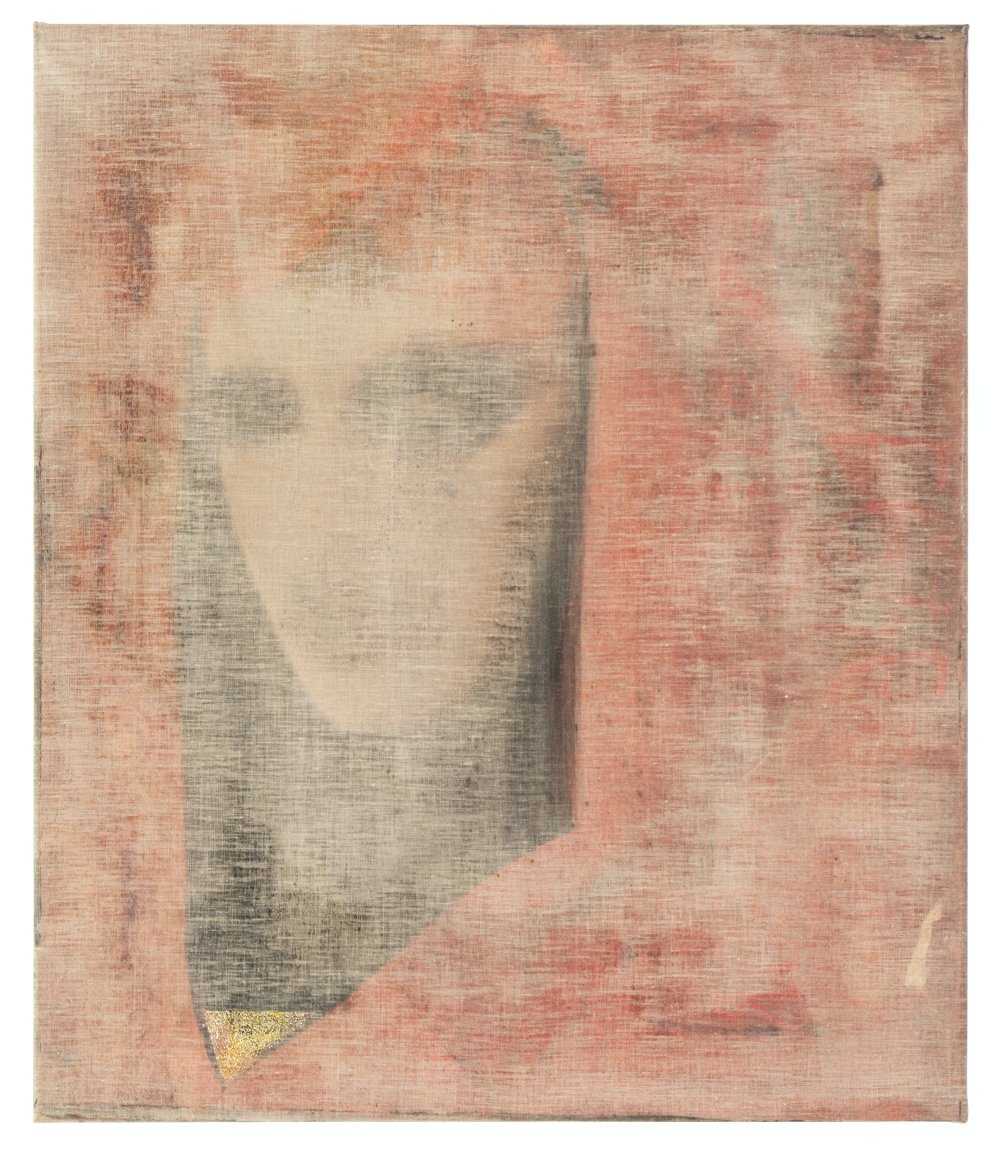 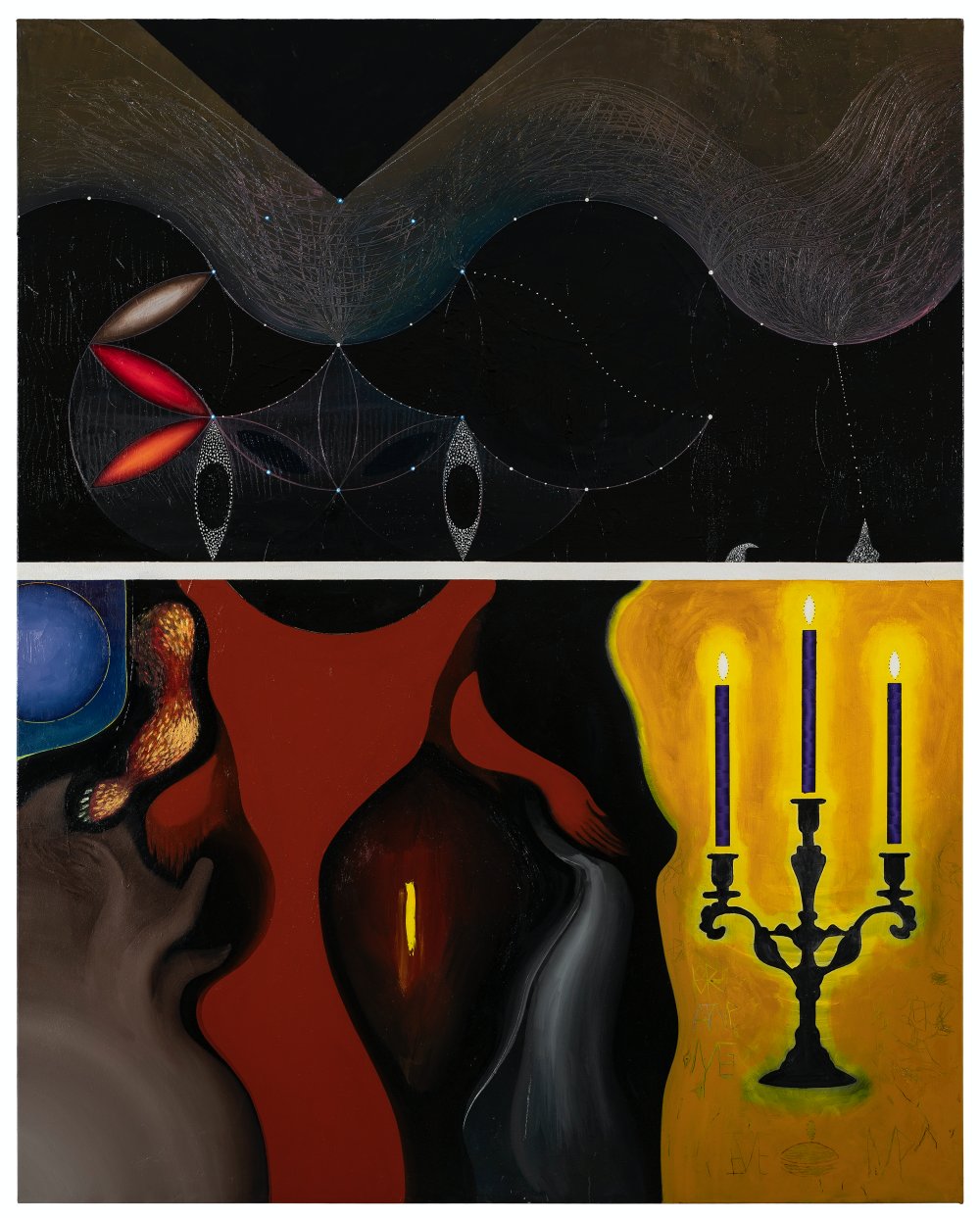 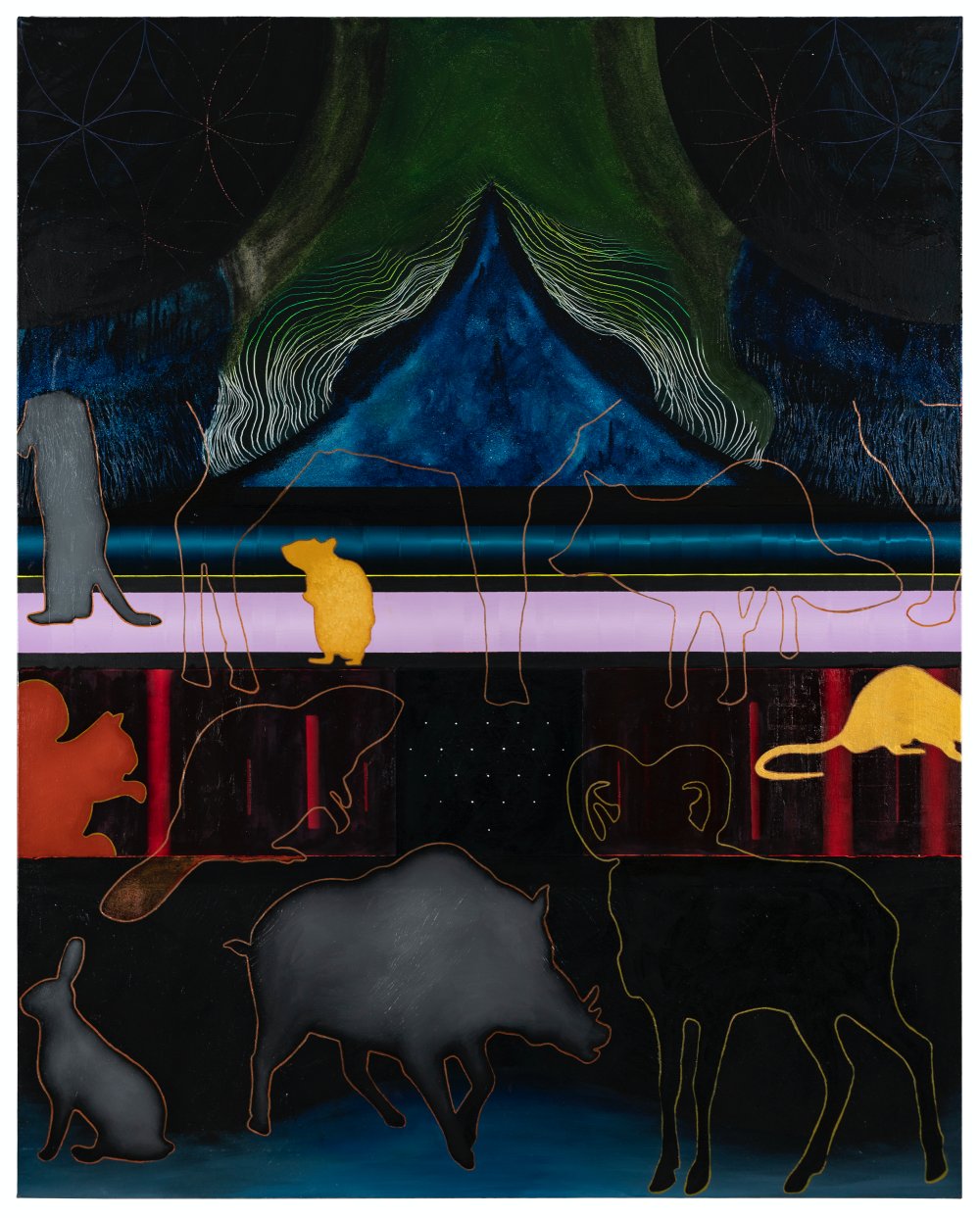 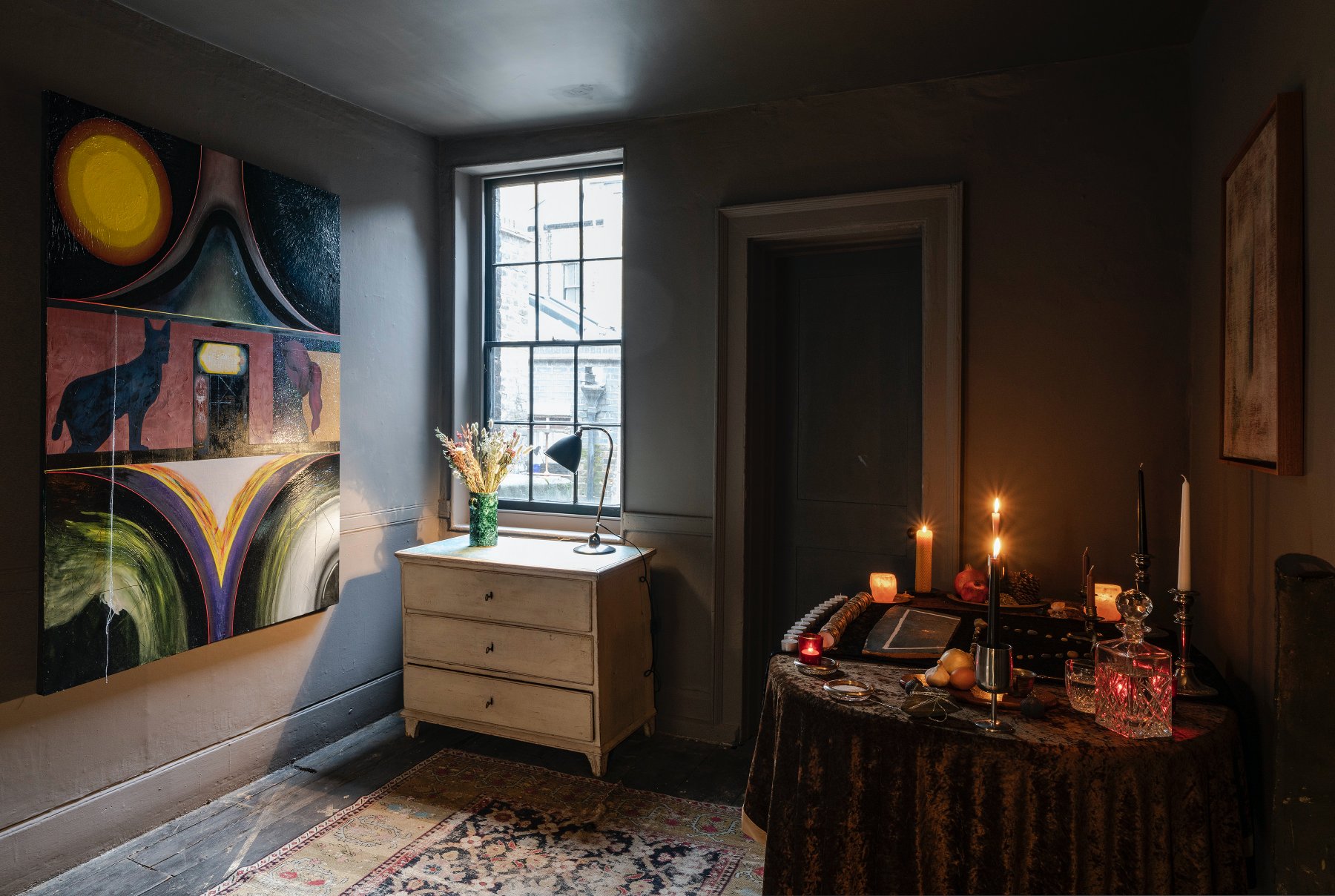 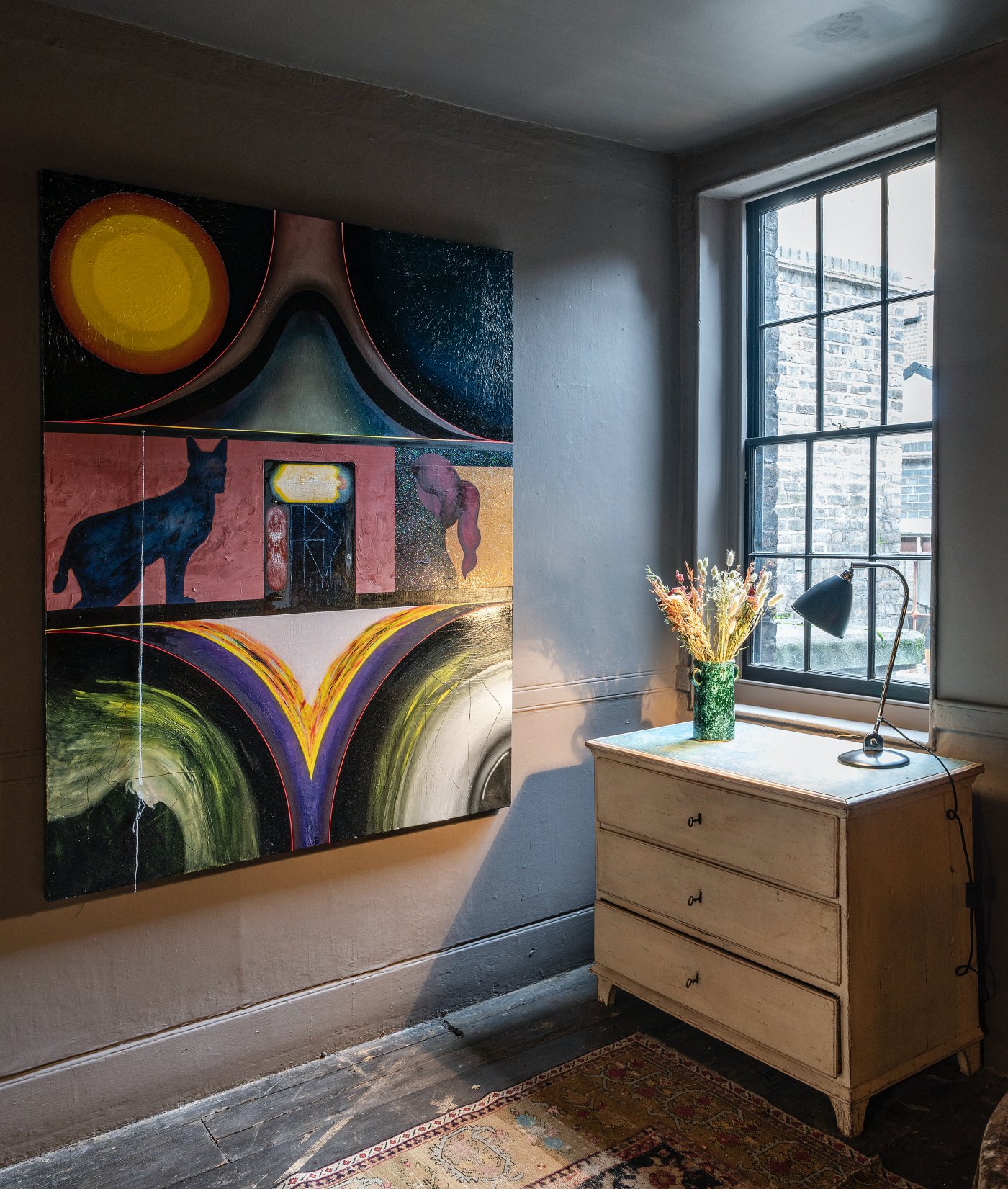 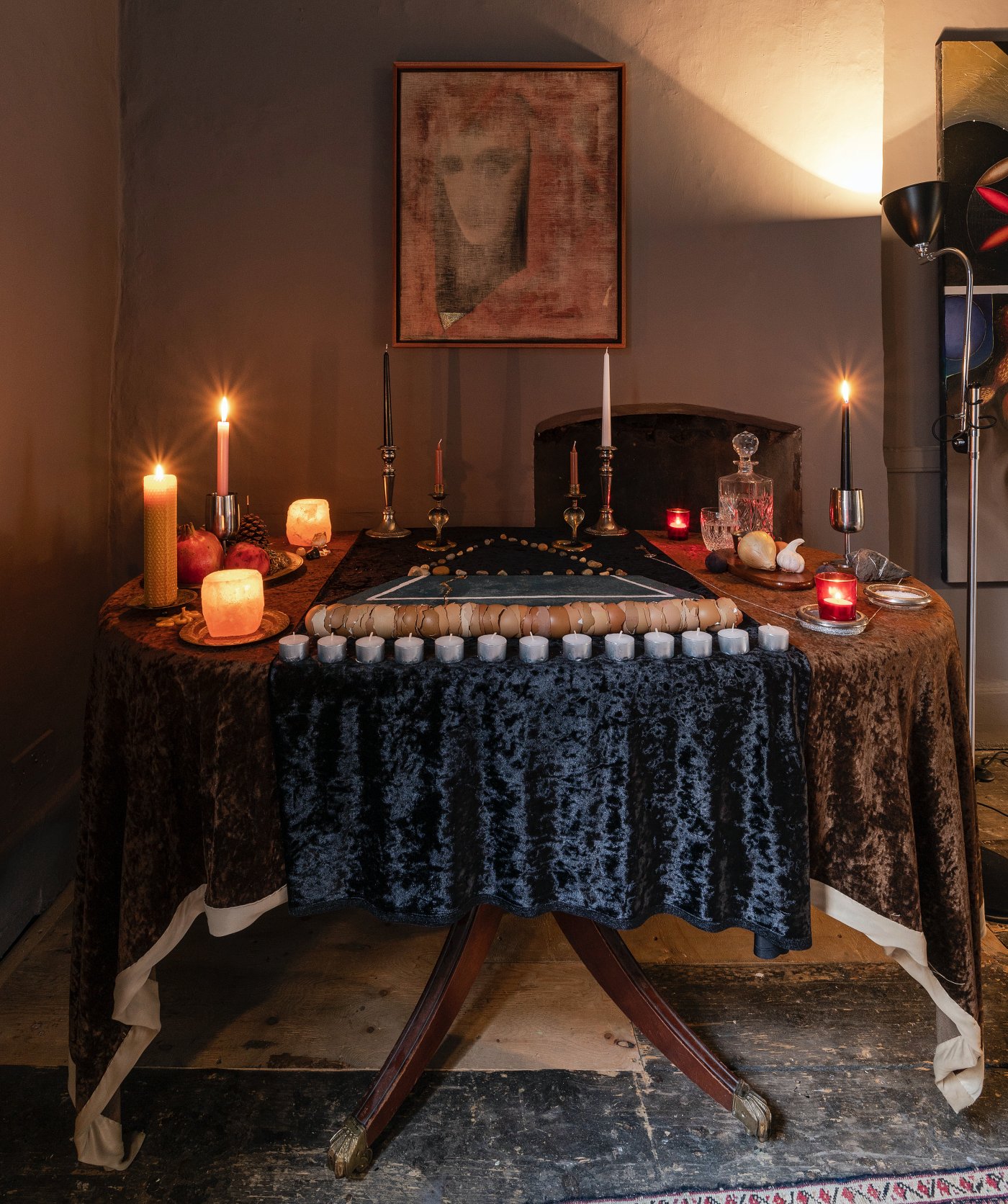 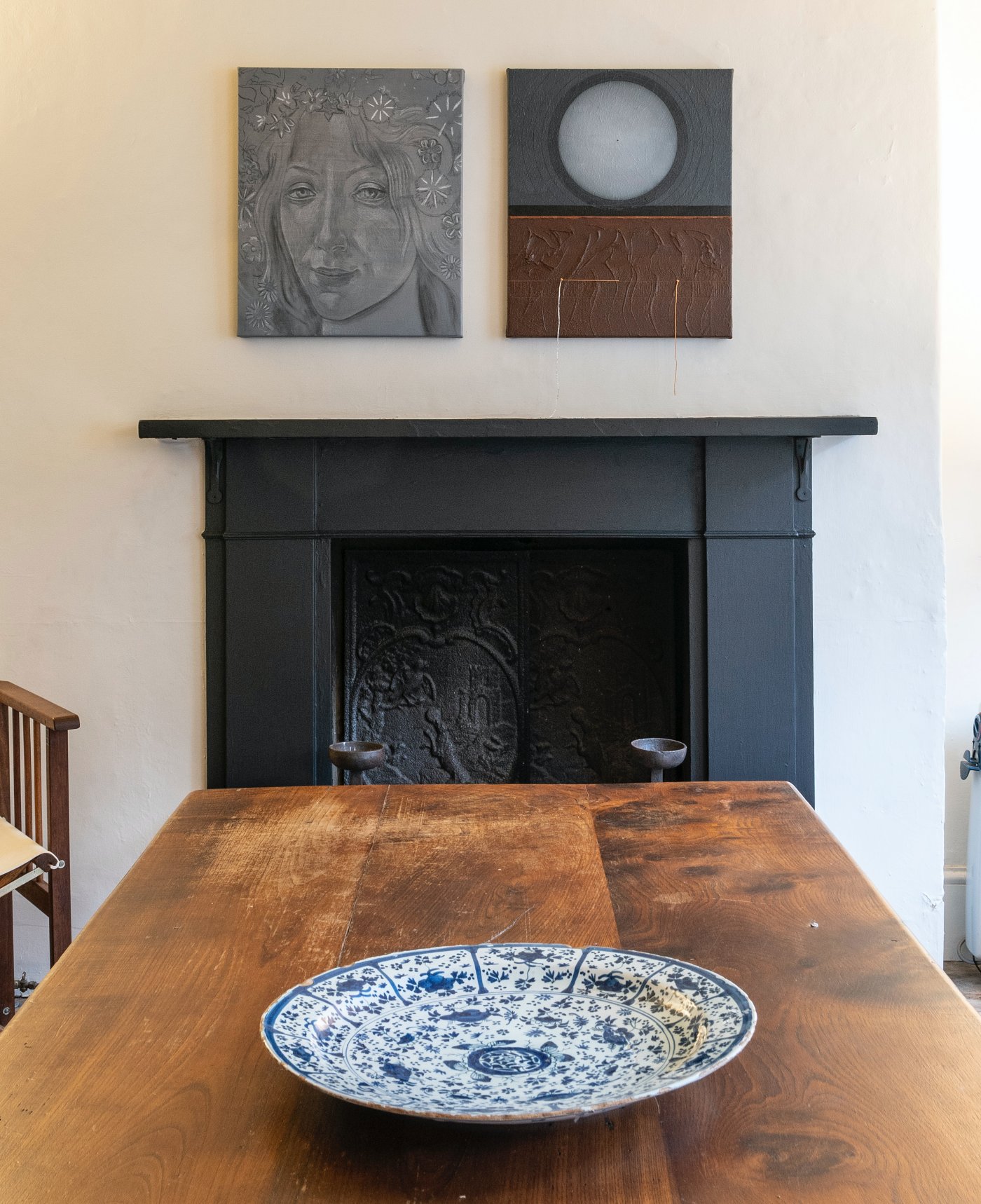 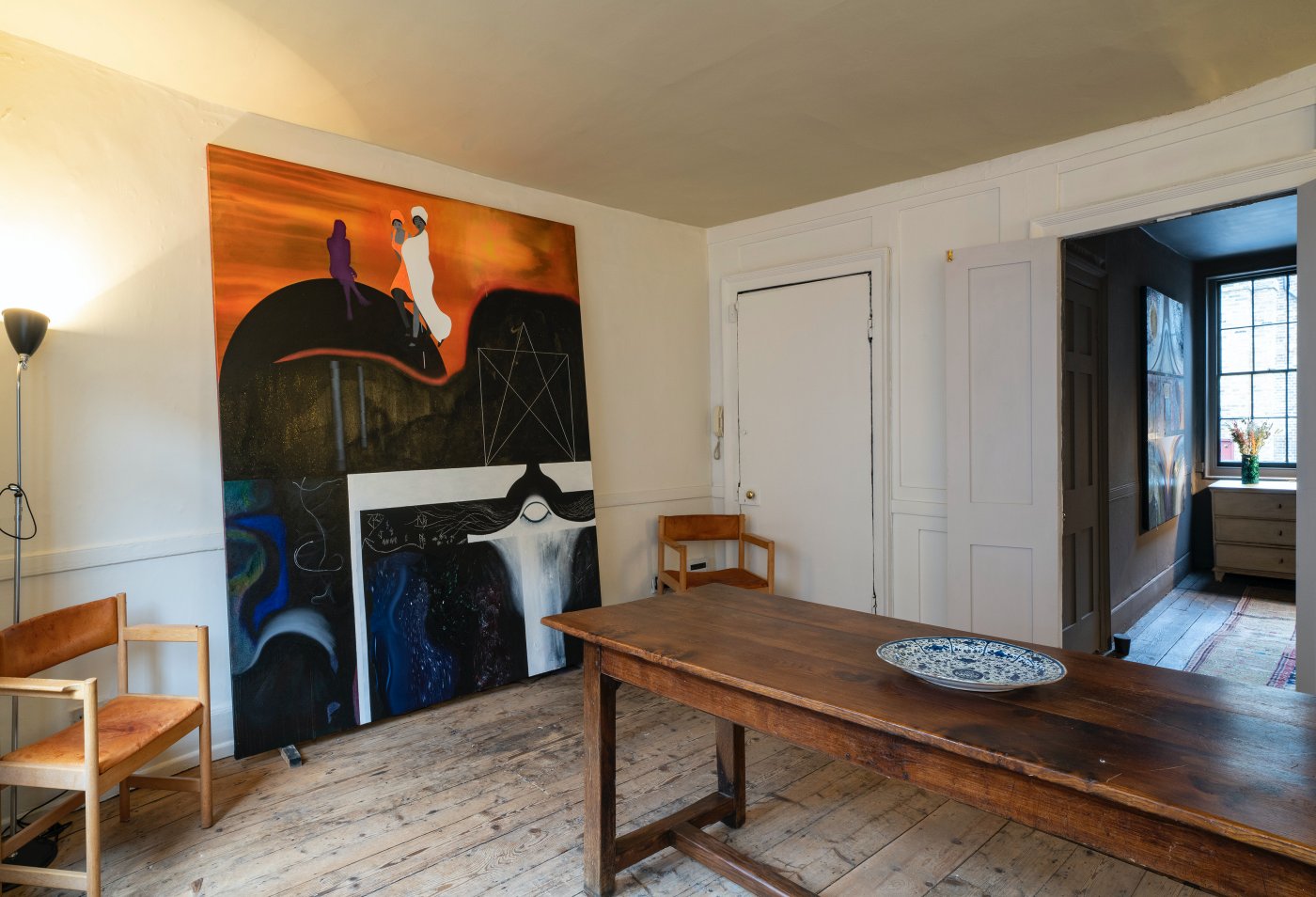 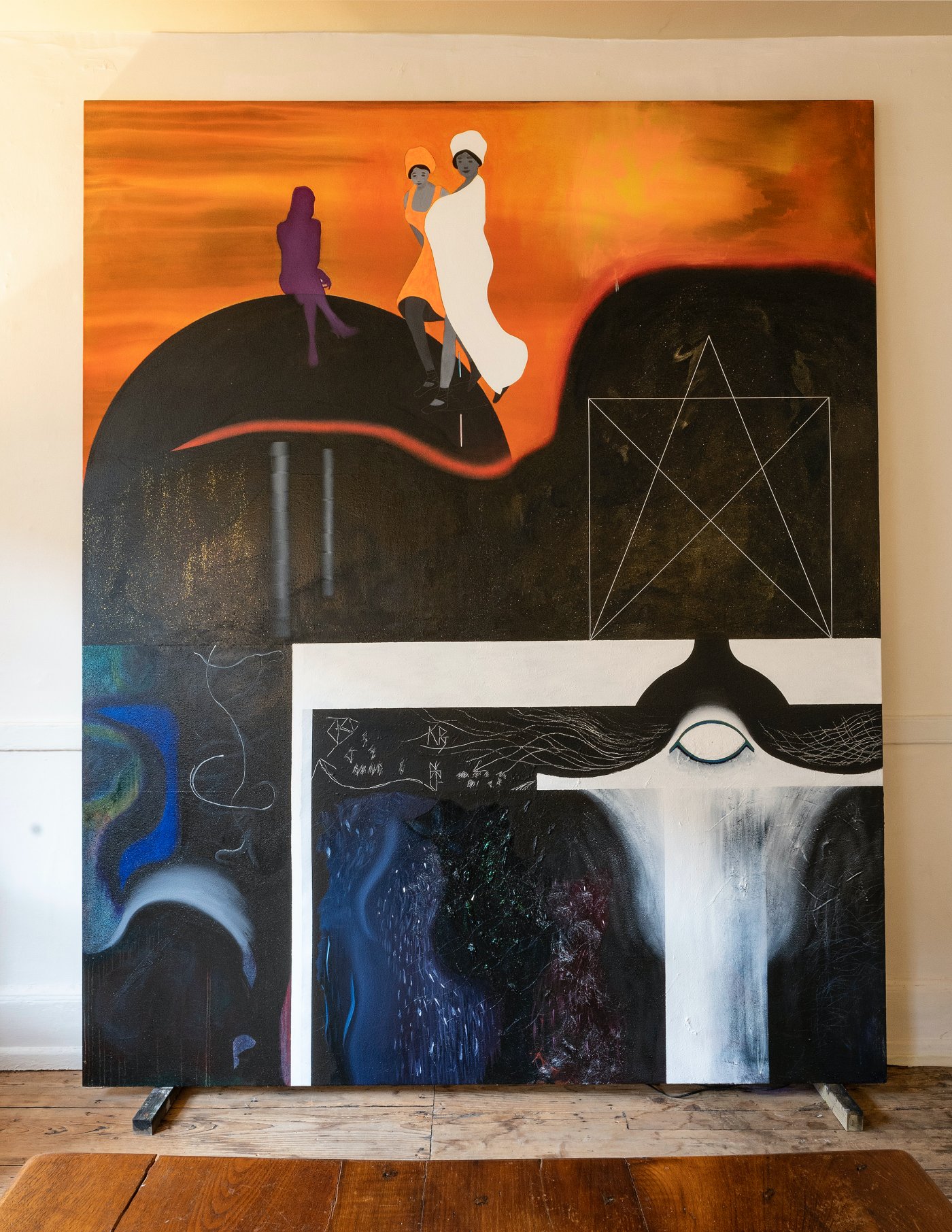 The title is an irreverent reference to the historic witch trials when suspects were tied by ropes and thrown into deep water – if they sank and drowned they were innocent, if they floated they must be guilty. In Glass’s view, witches can swim, so her title suggests the survival of the soul, an animistic reconnection, a re-enchantment, here through the painting process. To Glass, art is potentially the manifestation of a spiritual, magical process, whether or not artists realise it. Alongside the paintings this exhibition includes an offering table assembled by Glass, containing a historic coven relic.

Glass’s paintings grow and develop in a process she likens to a ‘slow-motion collage without a plan’. Figures and shapes are decontextualised, recontextualised, obscured and added over her long process of working. This is exemplified in the largest painting in the show, Purple Chooser (Jupiter) (2020), which Glass worked on for about a year. Approaching the canvas over time in different moods, channelling numerous influences, only one element remained constant: the purple figure in the left-hand corner. This physical and narrative journey animates the canvas, giving it a visceral, lived-in structure.

Each of Glass’s canvases is divided into distinct sections, echoing the collage mentality of her earlier work and visually emphasising the interruption of straightforward narrative. Incised flowing lines and shapes, including the flowers of life pattern from sacred geometry, are scratched into the surface of the canvases, revealing underlayers of paint. These highly textured paintings incorporate thread, sand and glitter. Meanwhile, stock silhouettes are added, reworked and hidden. The visual and textual differences in each work are eventually harmonious, each painting having its own sensual logic and unexpected sense of presence.

Come Through (2010), the oldest is paired with a table arrangement that includes a remnant from a historic initiation or summoning triangle, loaned by a High Priest from the Bricket Wood coven lineage. Rather than separate this relic from its context, Glass displays it within its own language on a table beneath Come Through. She completes the summoning triangle fragment with stones and protects it with a line of eggshells. The coven relic is surrounded by symbolic arrangements and offerings, including pomegranates for Persephone’s retreat into the underworld for wintertime and to Hekate, ancient goddess of witches, who is the keeper of keys to the underworld. Glass offers Hecate the traditional onion, garlic, egg and red wine libation on a board into which she has burned the flowers of life pattern. The table’s central black velvet area containing the ritual set-up will remain quietly unlit. Black and white candles representing the harmony of dualities, will be lit by Glass on the first and last day of the exhibition.

Her work has been exhibited extensively across the UK and abroad, including in group exhibitions at the ICA and the Barbican. Her solo exhibitions include Youthinkyoufuckinslick at Alfred Camp, London (1999); Ace Gallery, Los Angeles (1999); Hales Gallery, London (2006) and The Body in the Library, V22 Ashwin Street, London (2007) and Persephone, Queen of the Underworld (2014, Cock ‘n Bull Gallery, London).