Steve Turner presents Tableaux Vivant, a solo exhibition by Kevin McNamee-Tweed which features a selection of new ceramic paintings which are his largest and most complicated works to date. 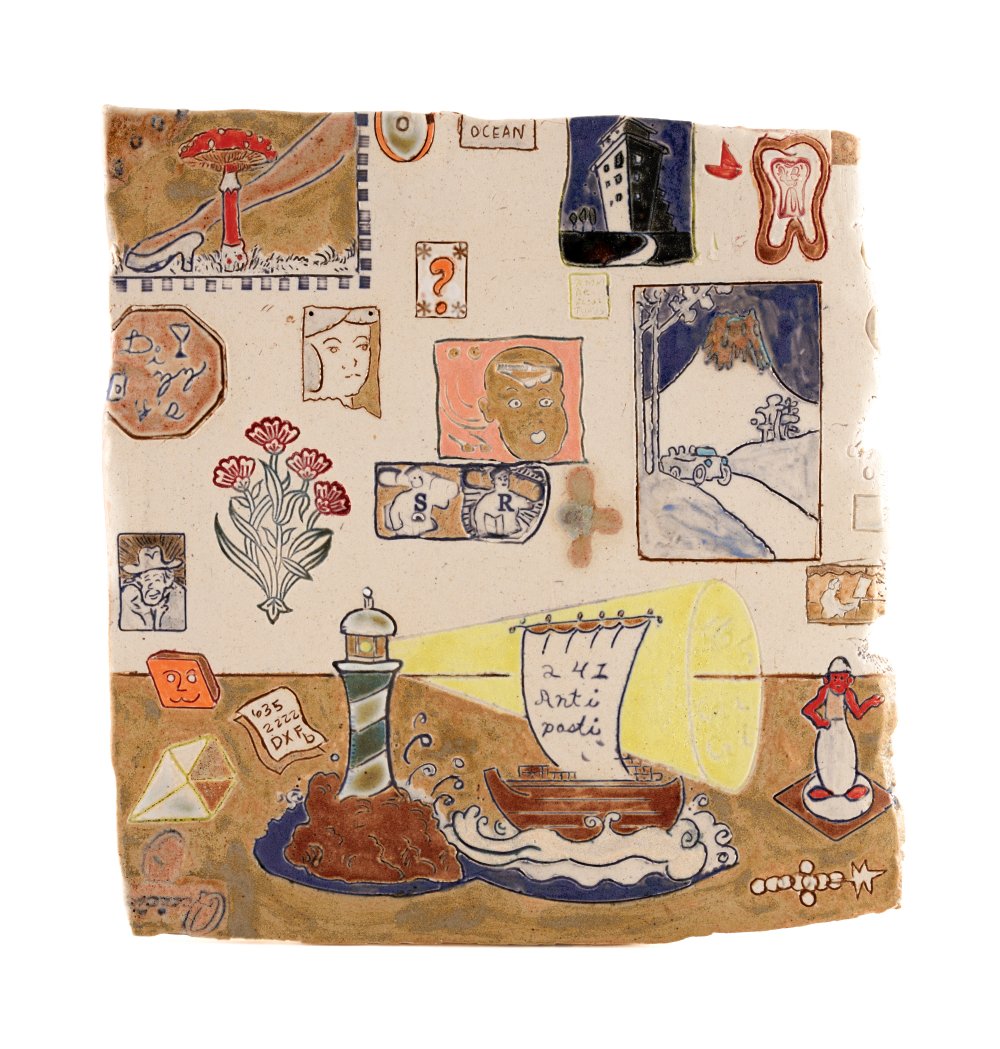 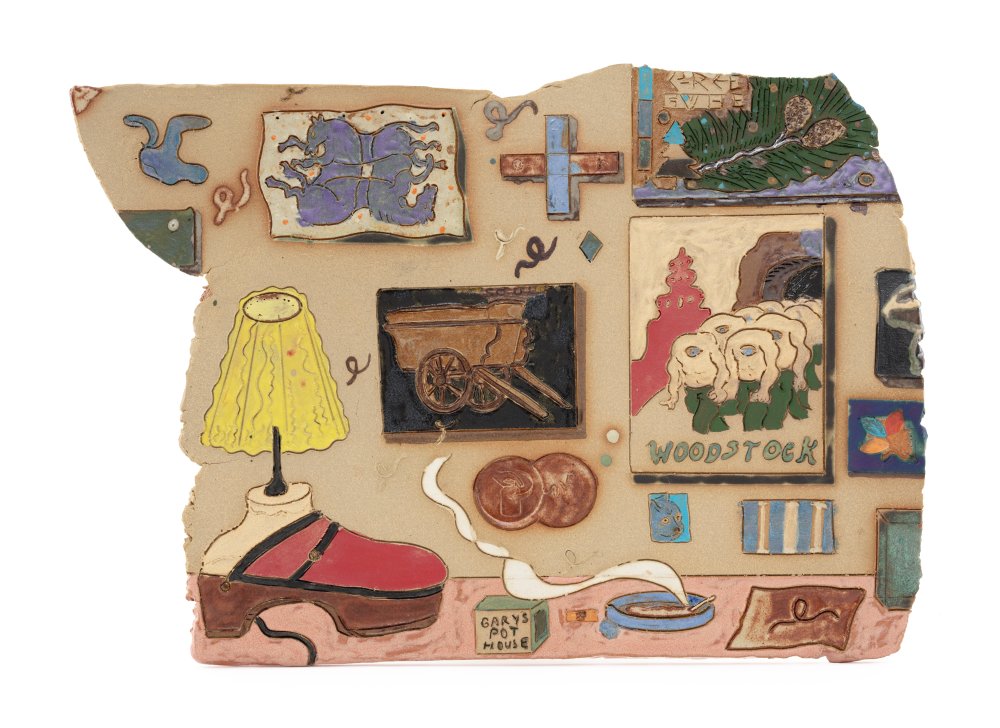 Kevin McNamee-Tweed
Back from Gary's, 2020 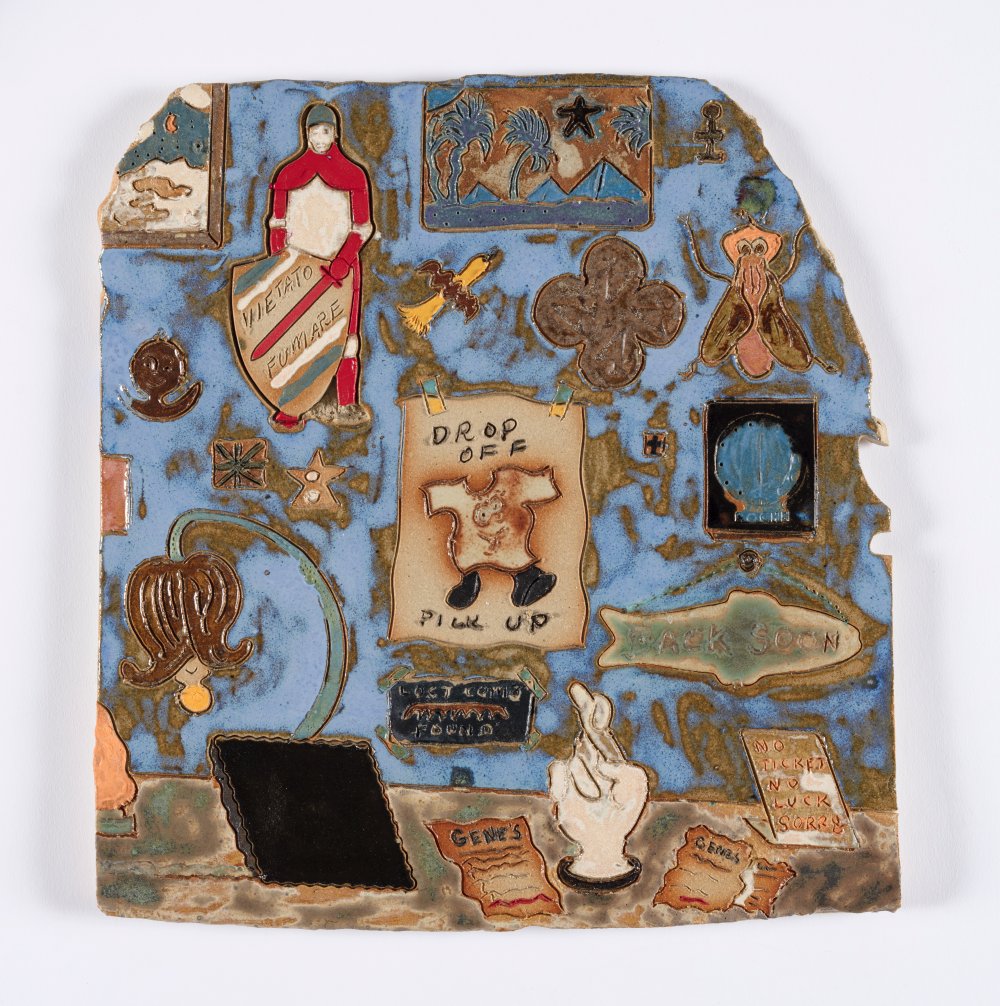 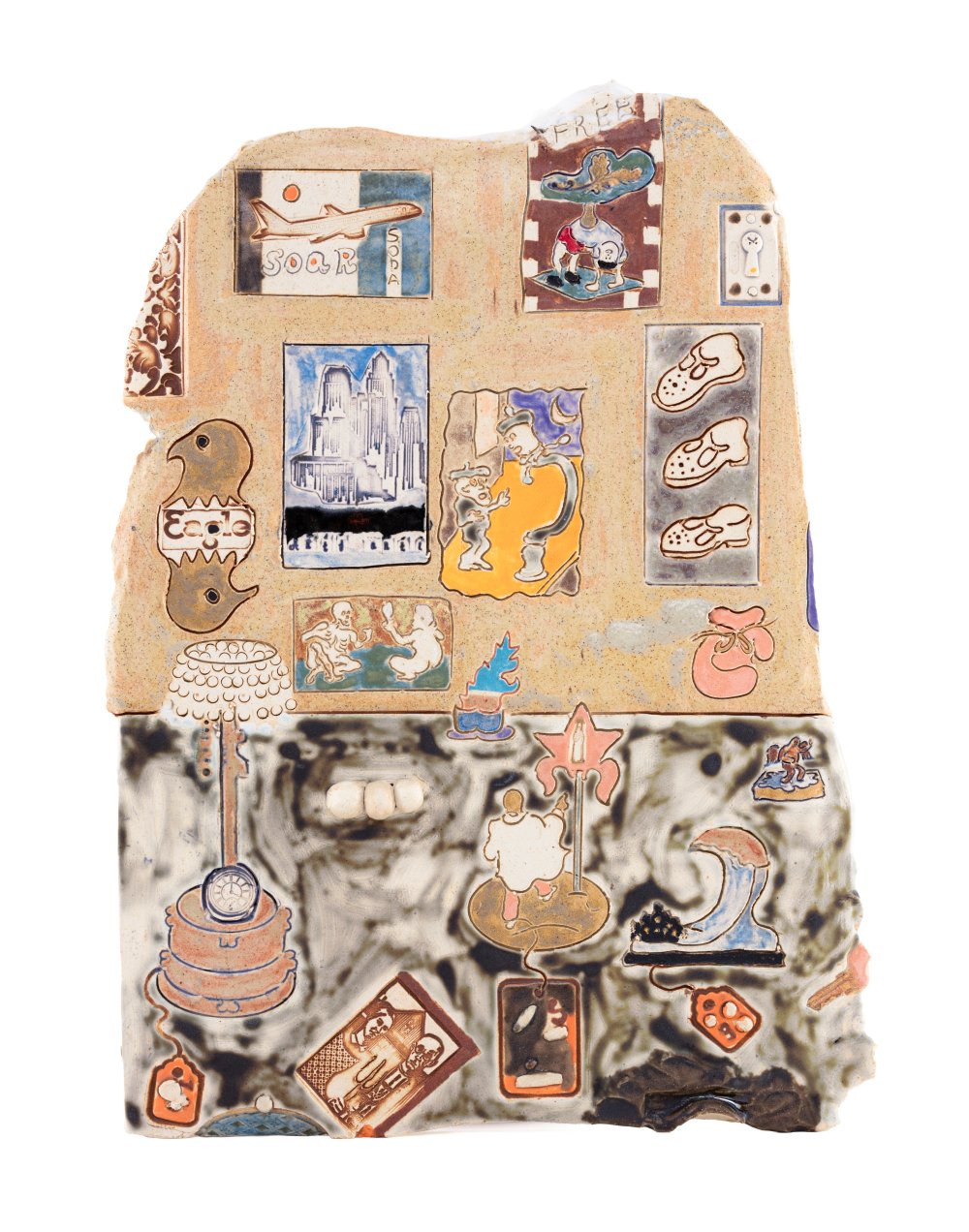 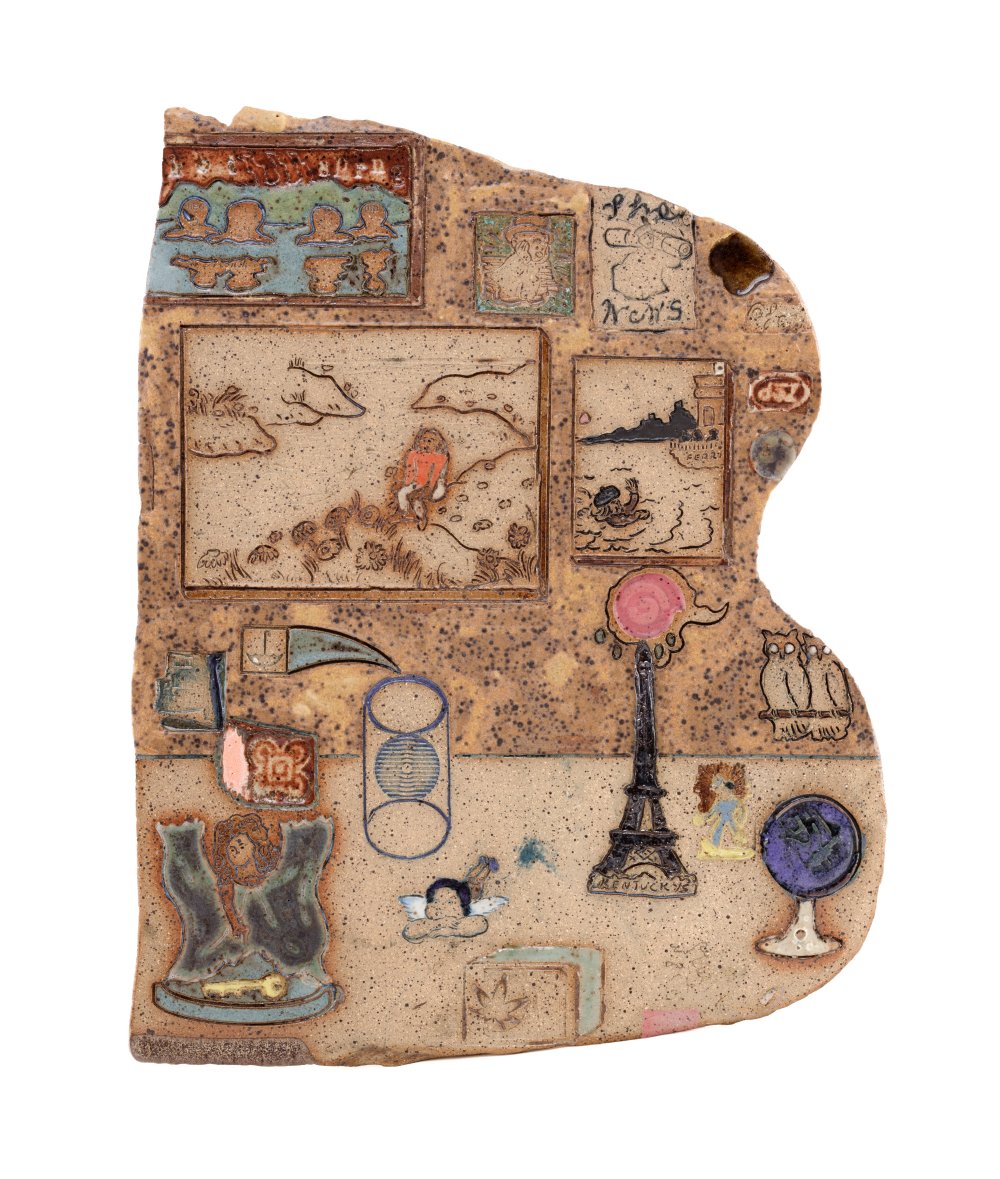 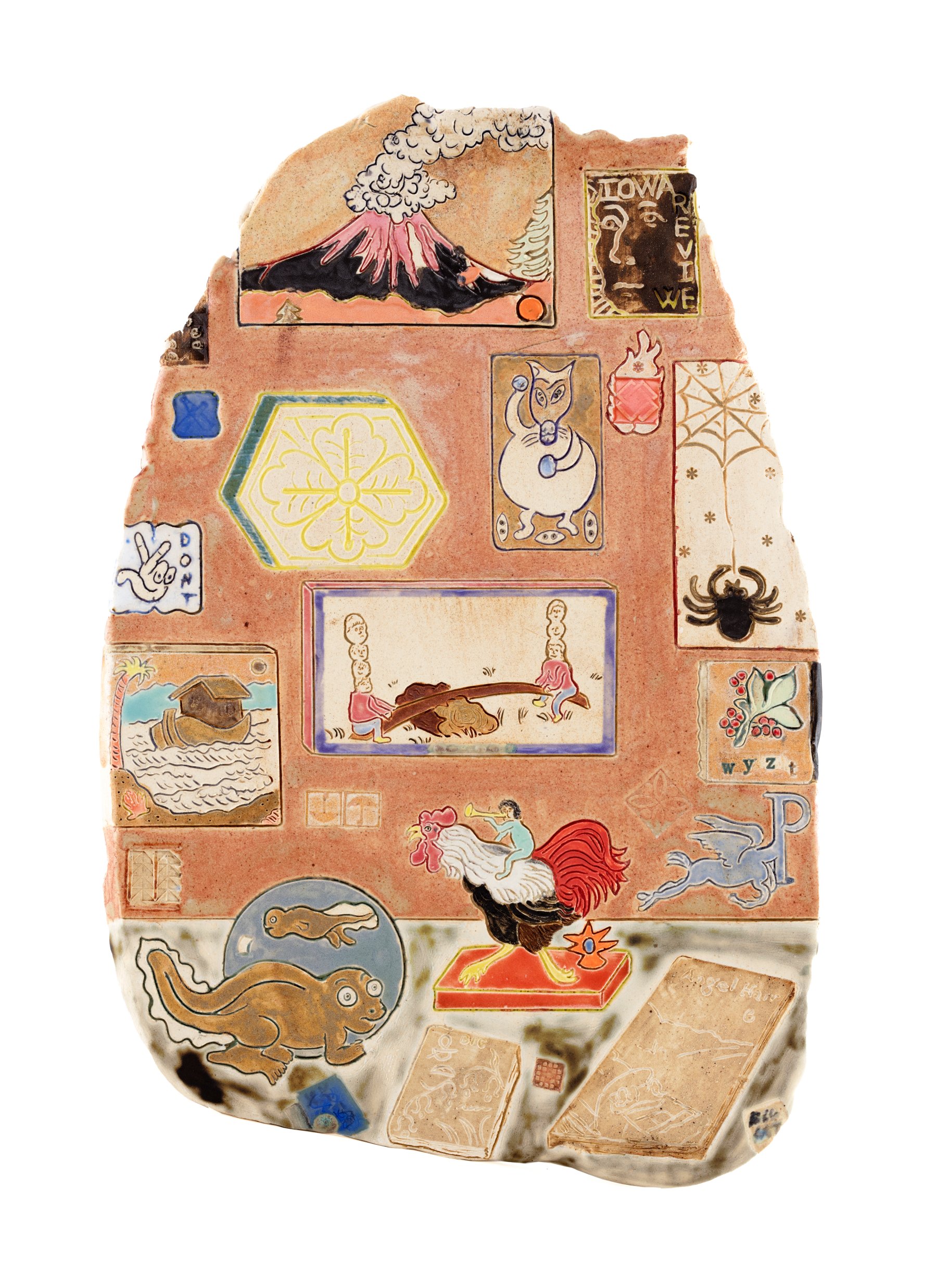 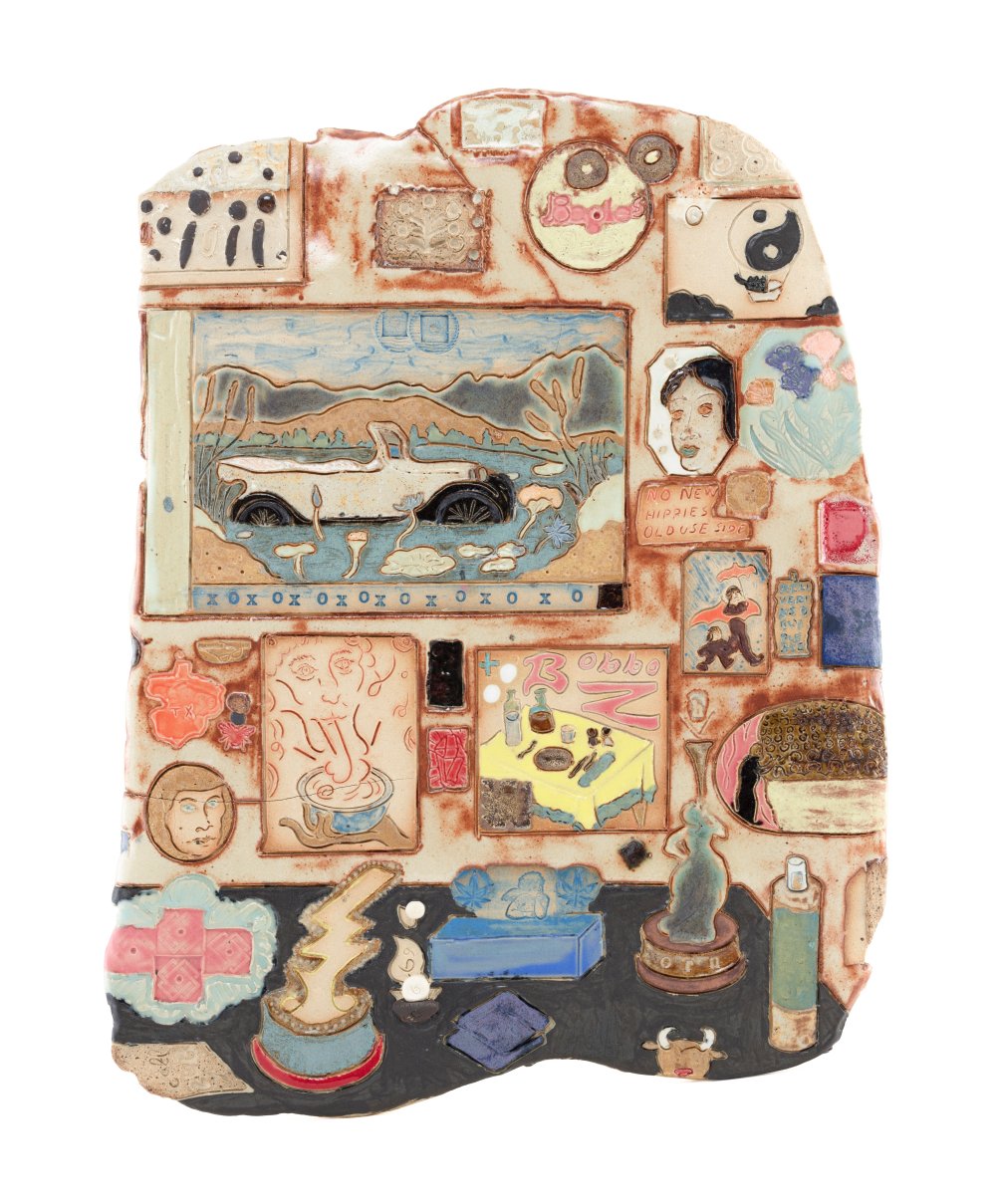 Kevin McNamee-Tweed
Use Side Door, 2020 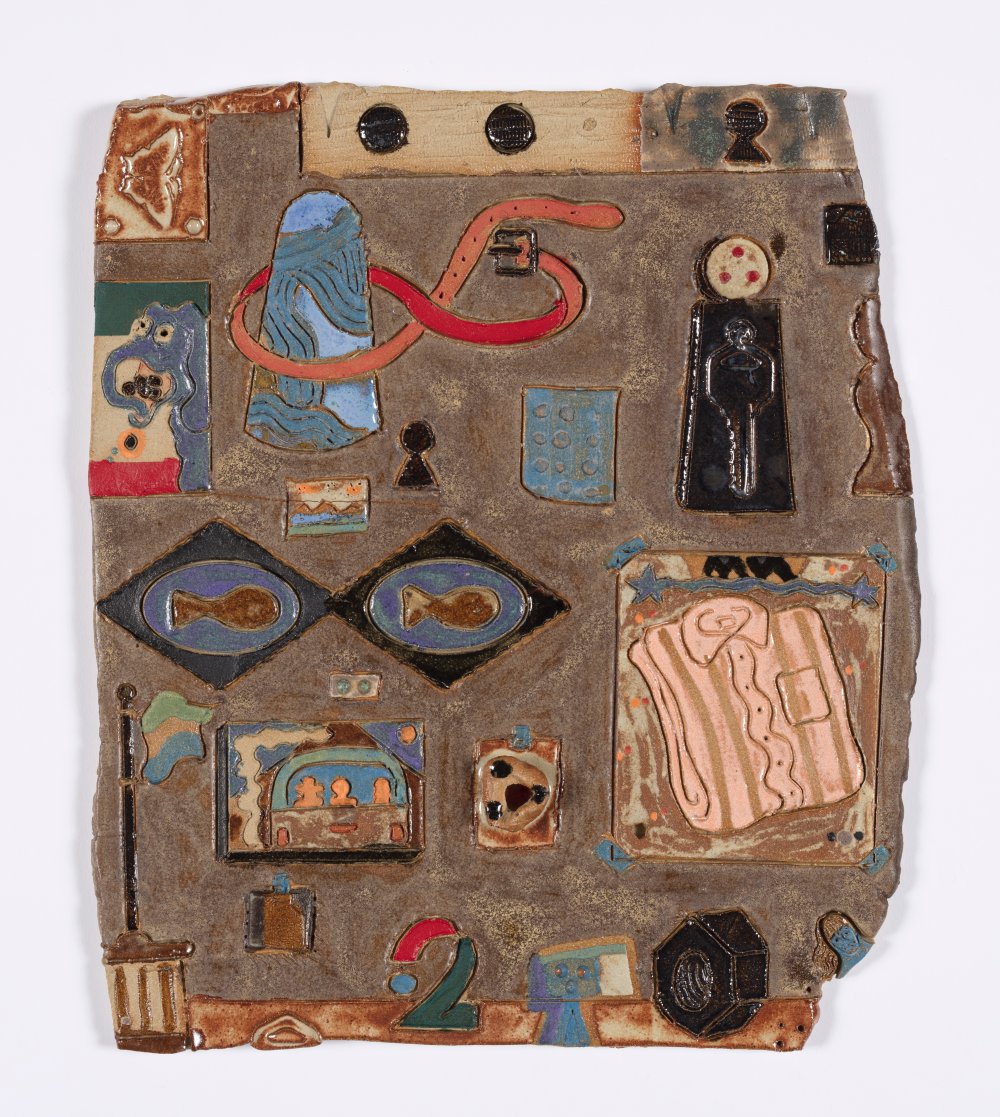 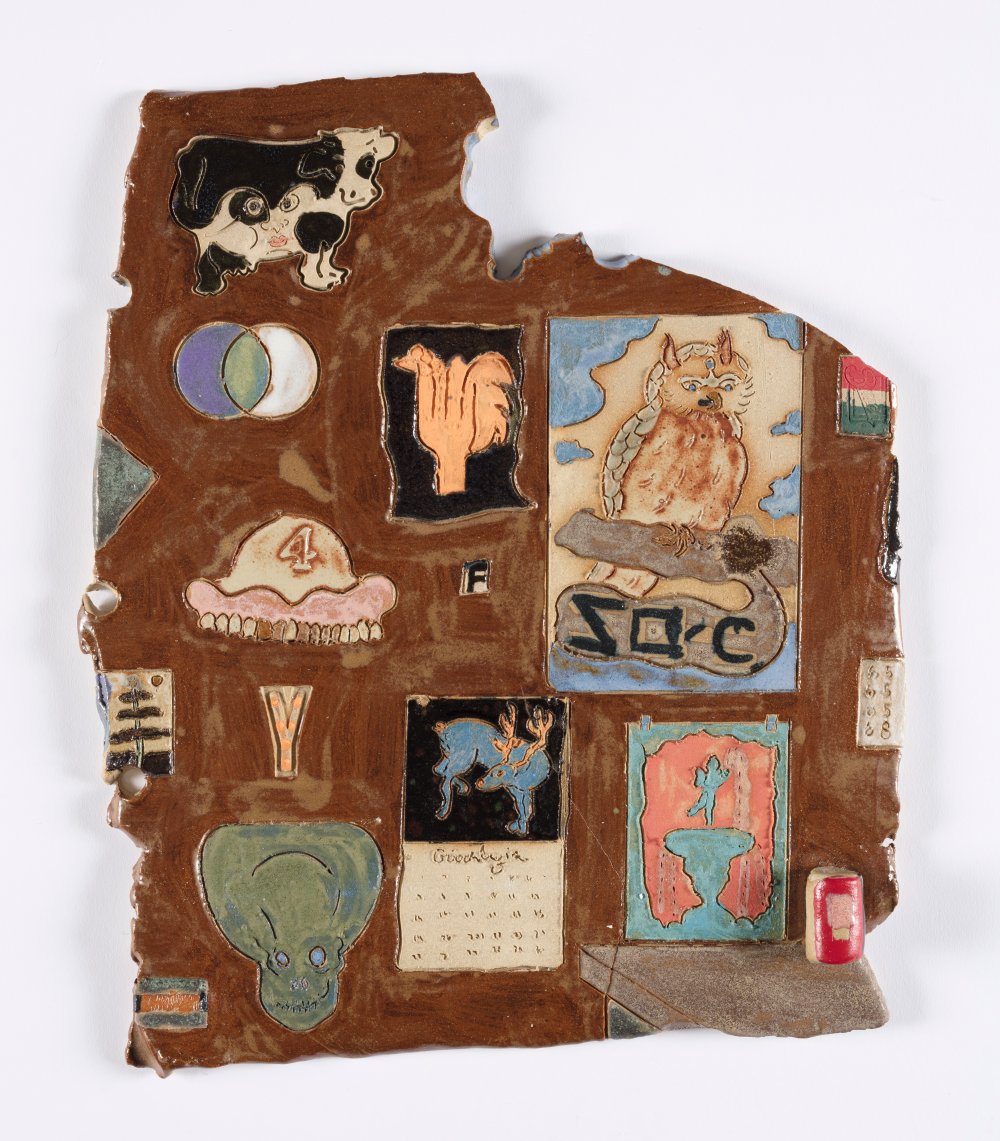 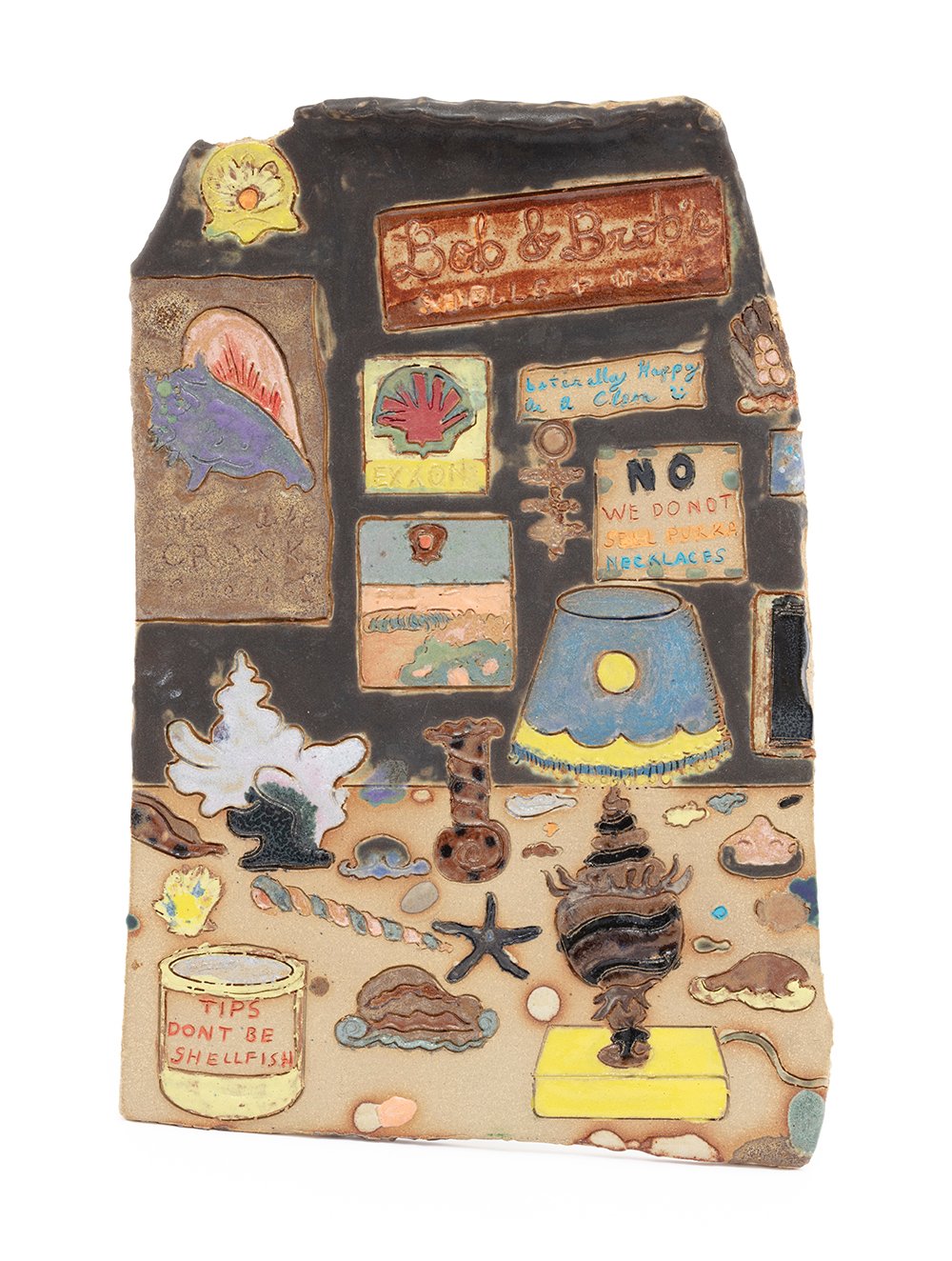 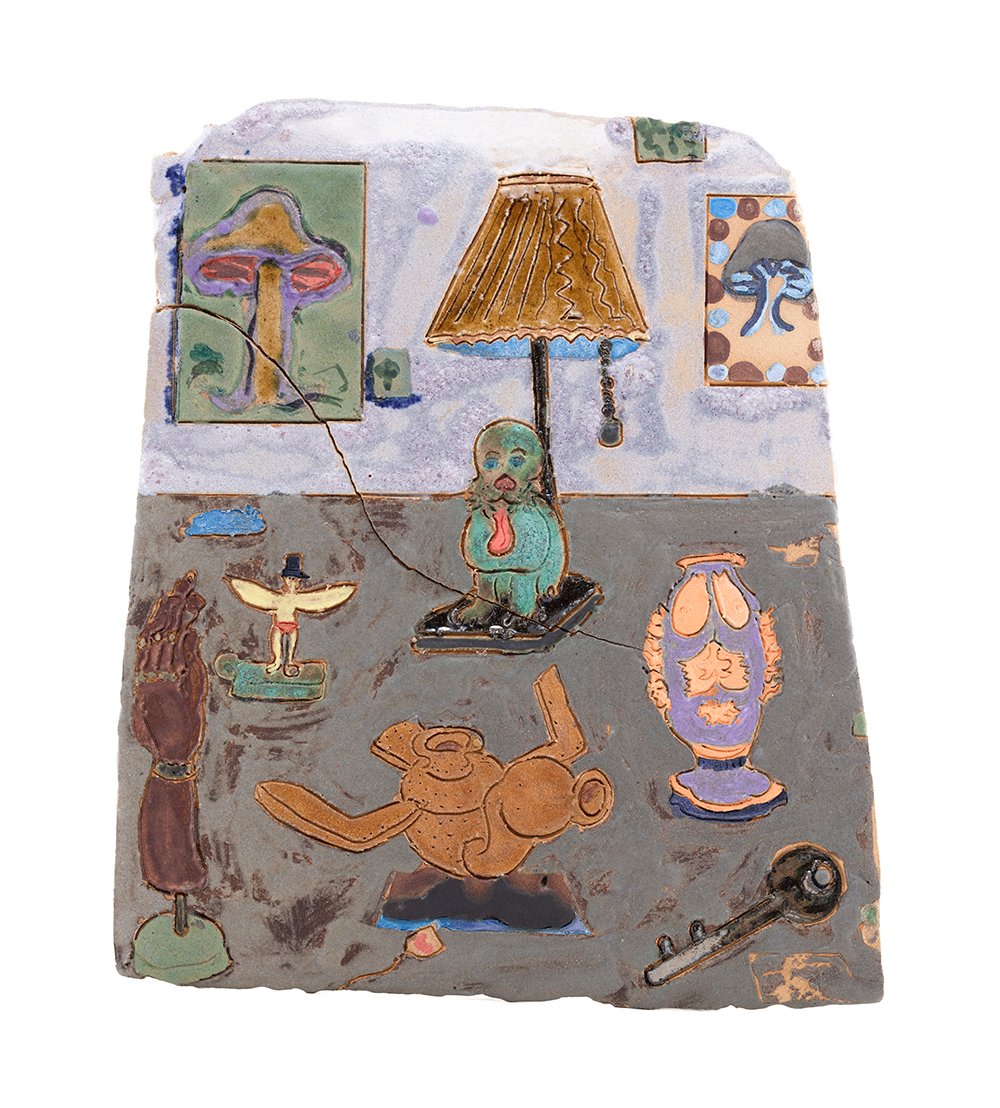 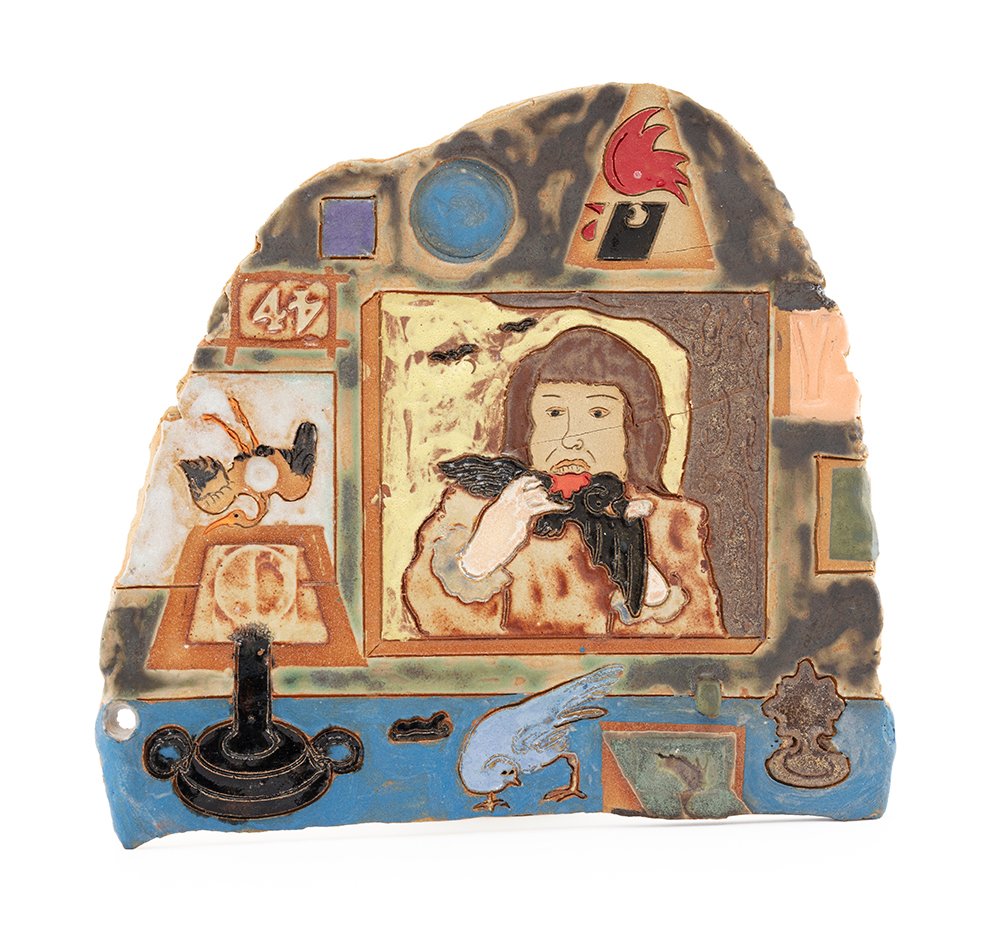 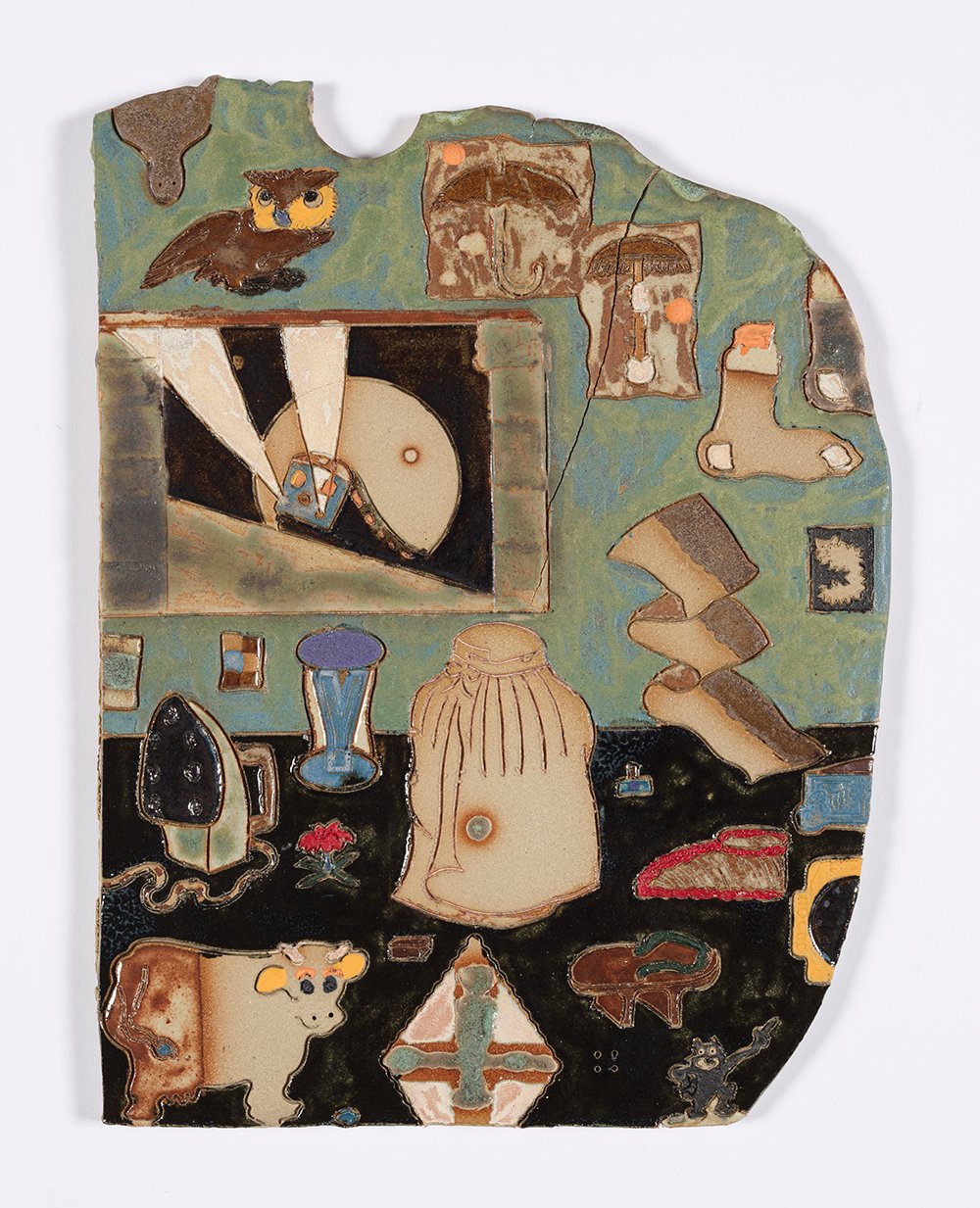 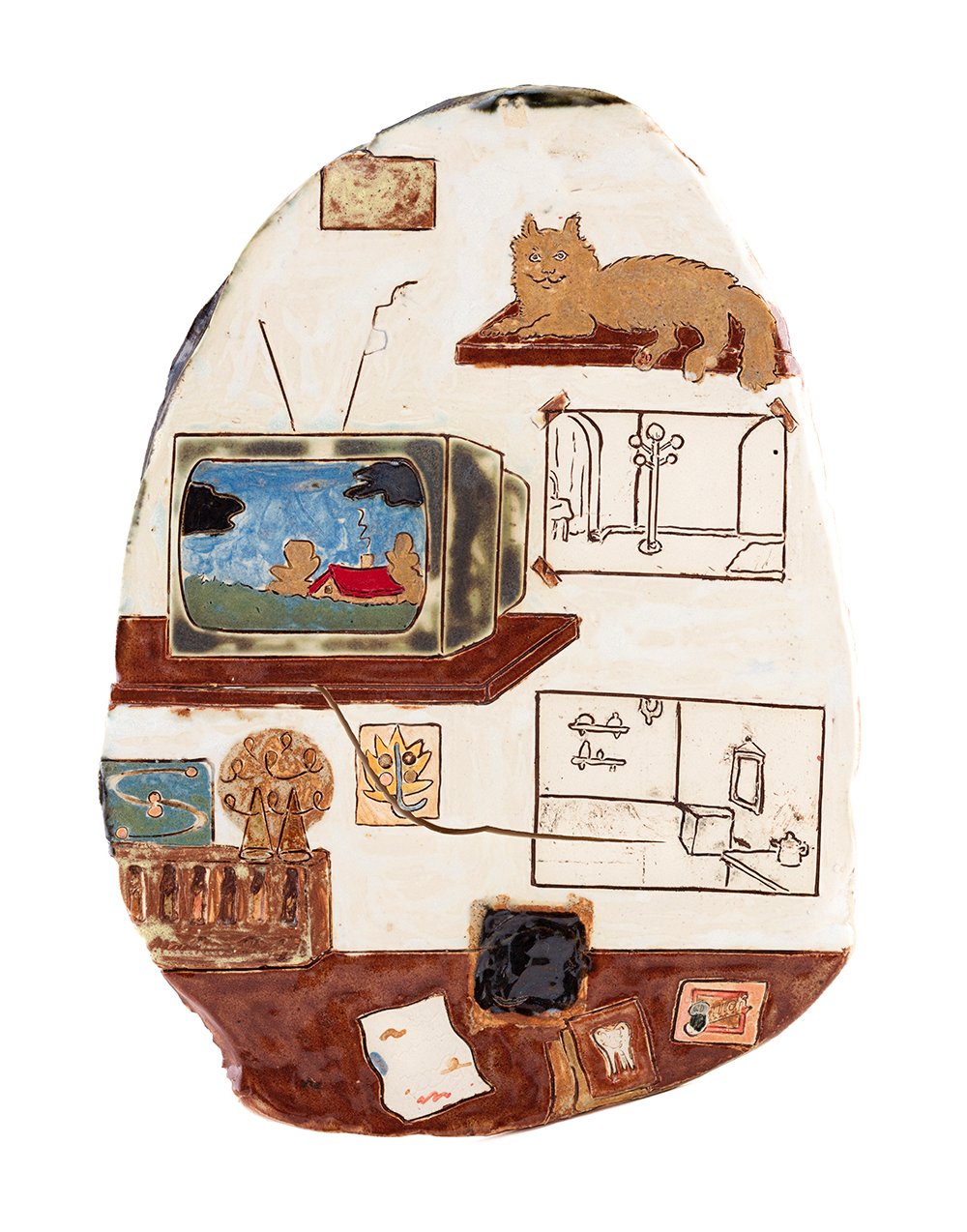 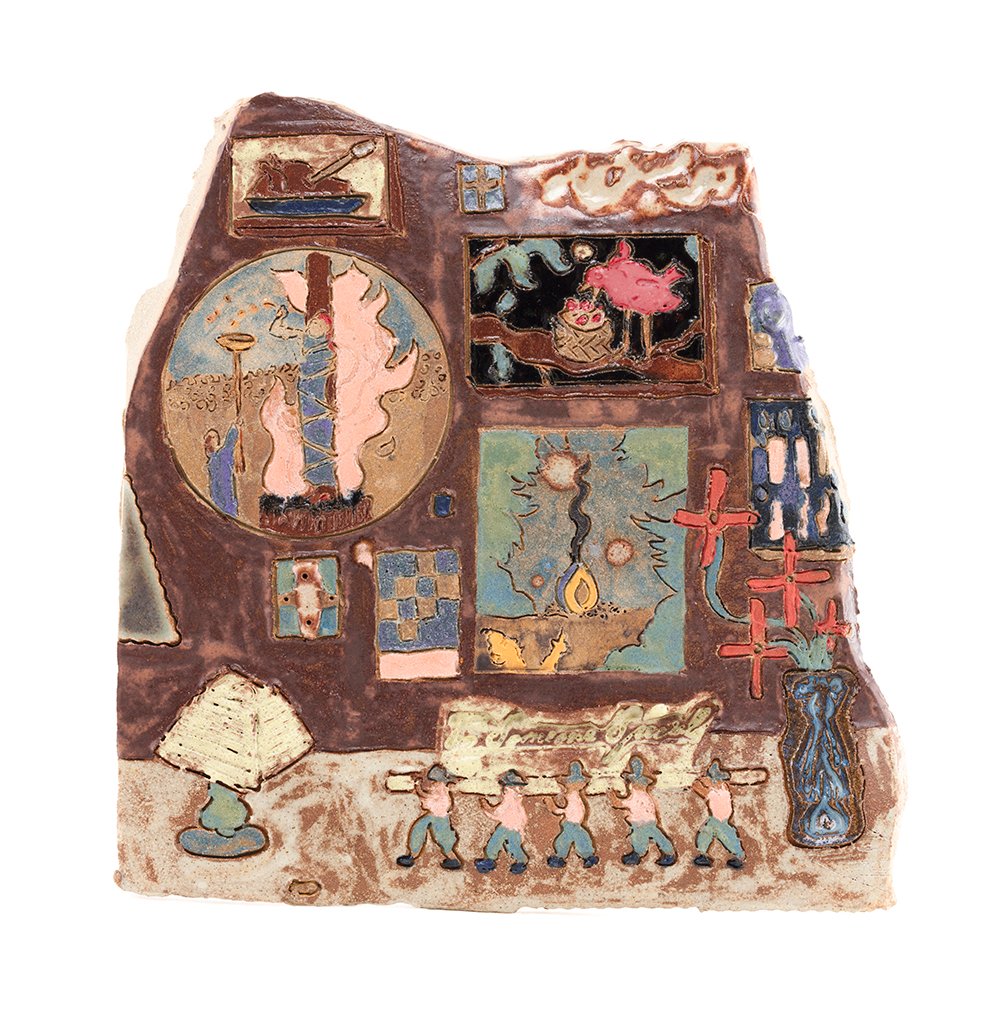 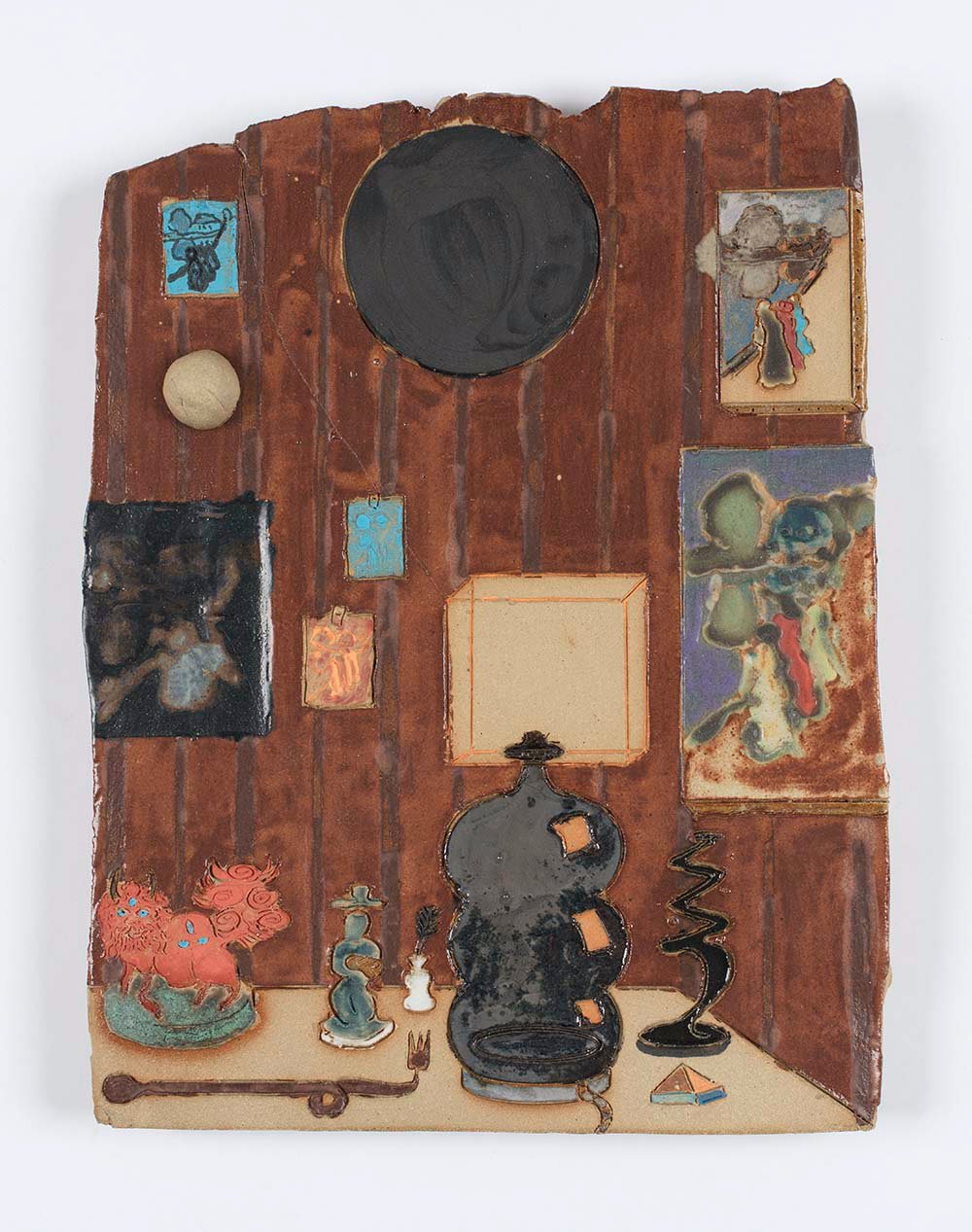 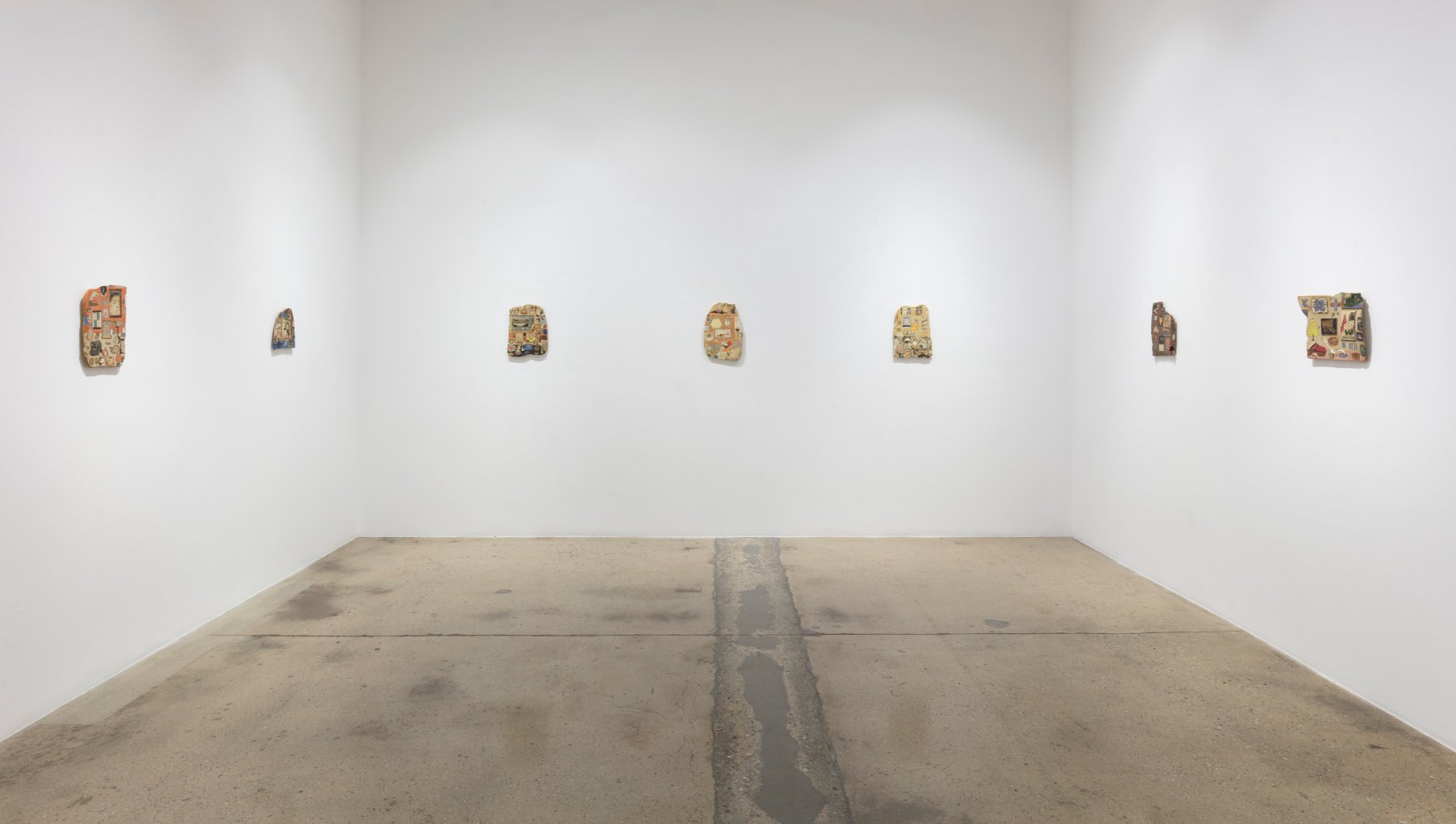 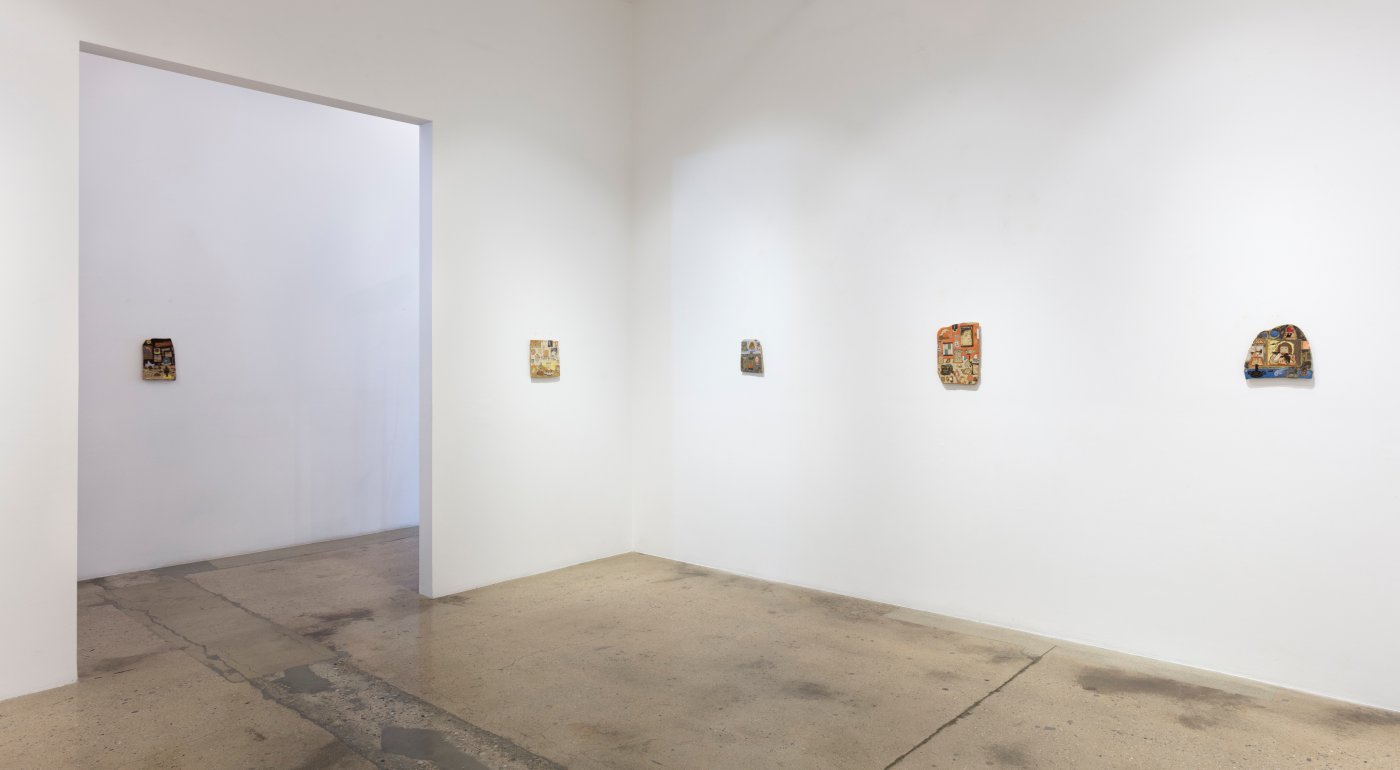 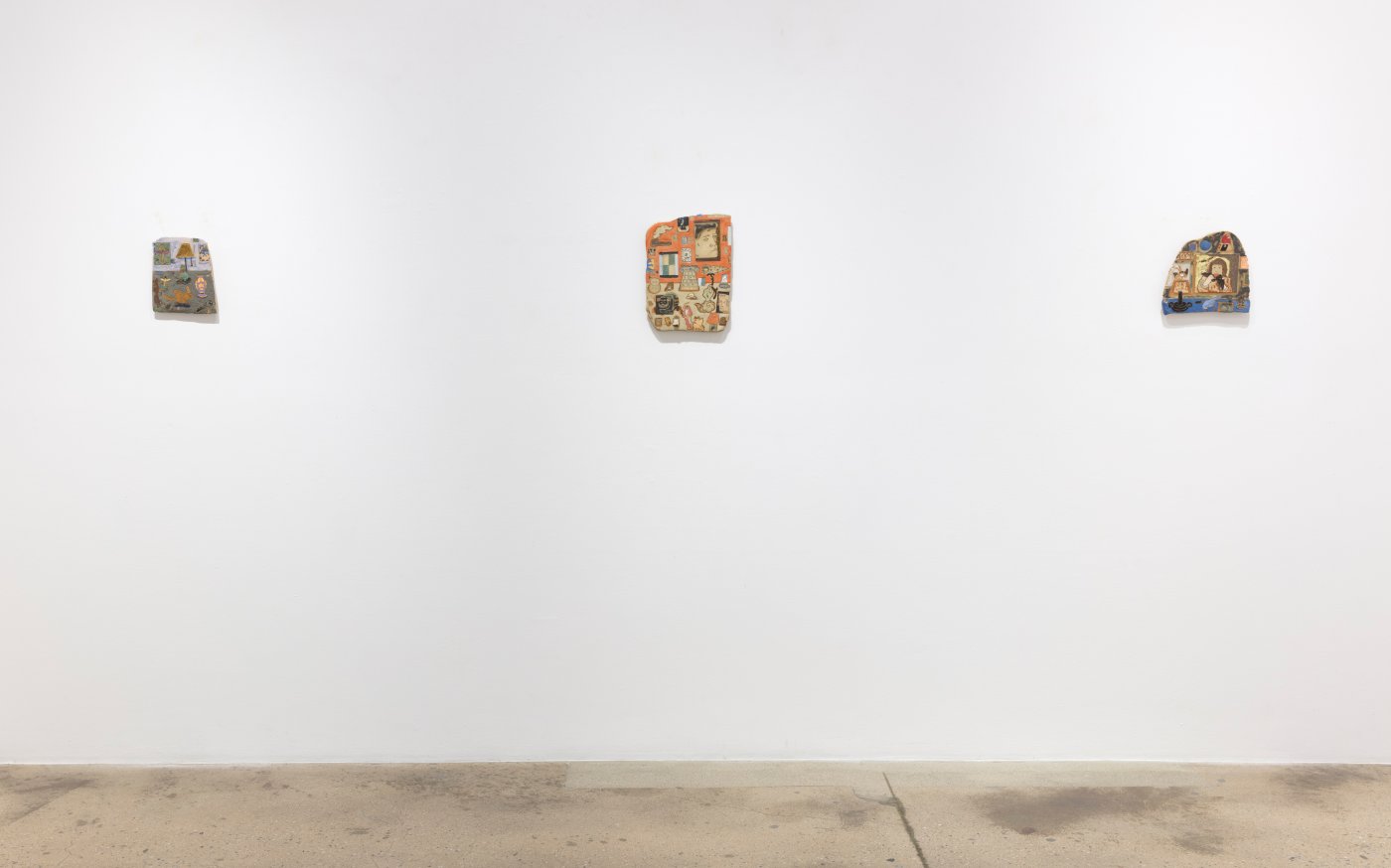 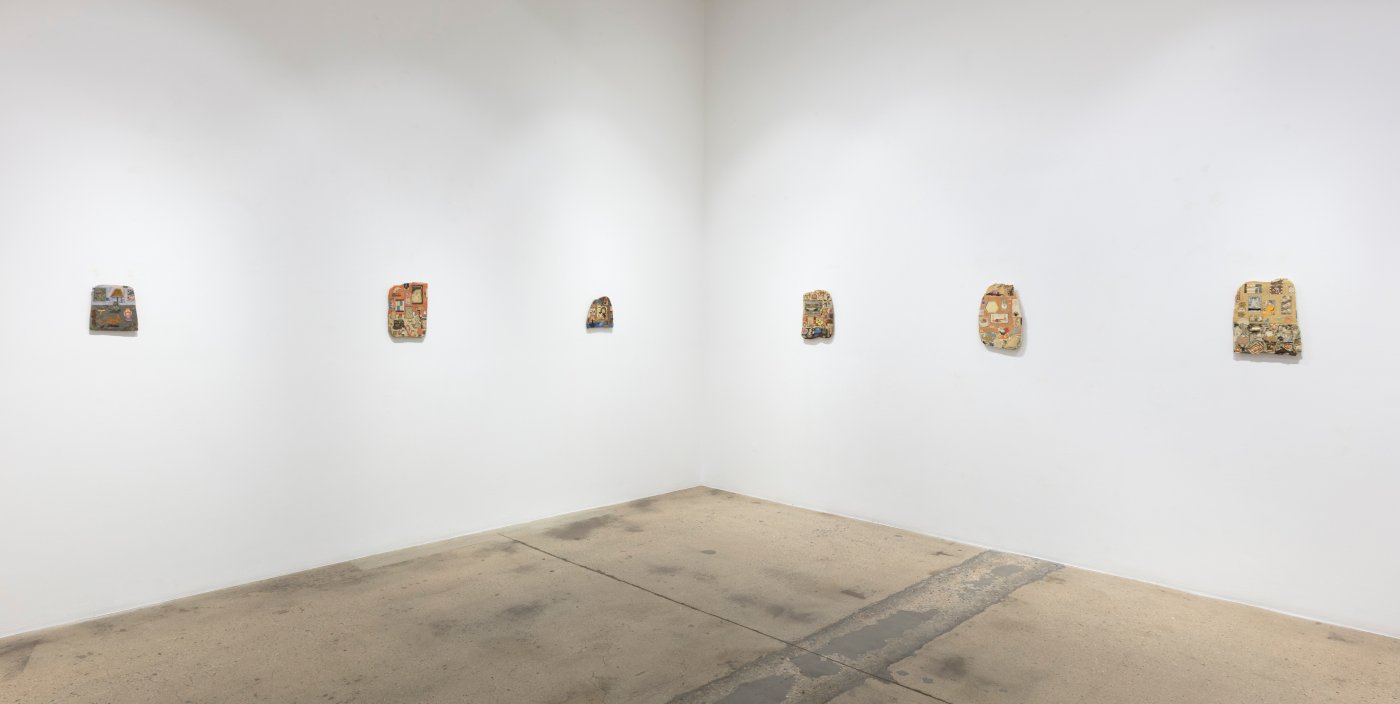 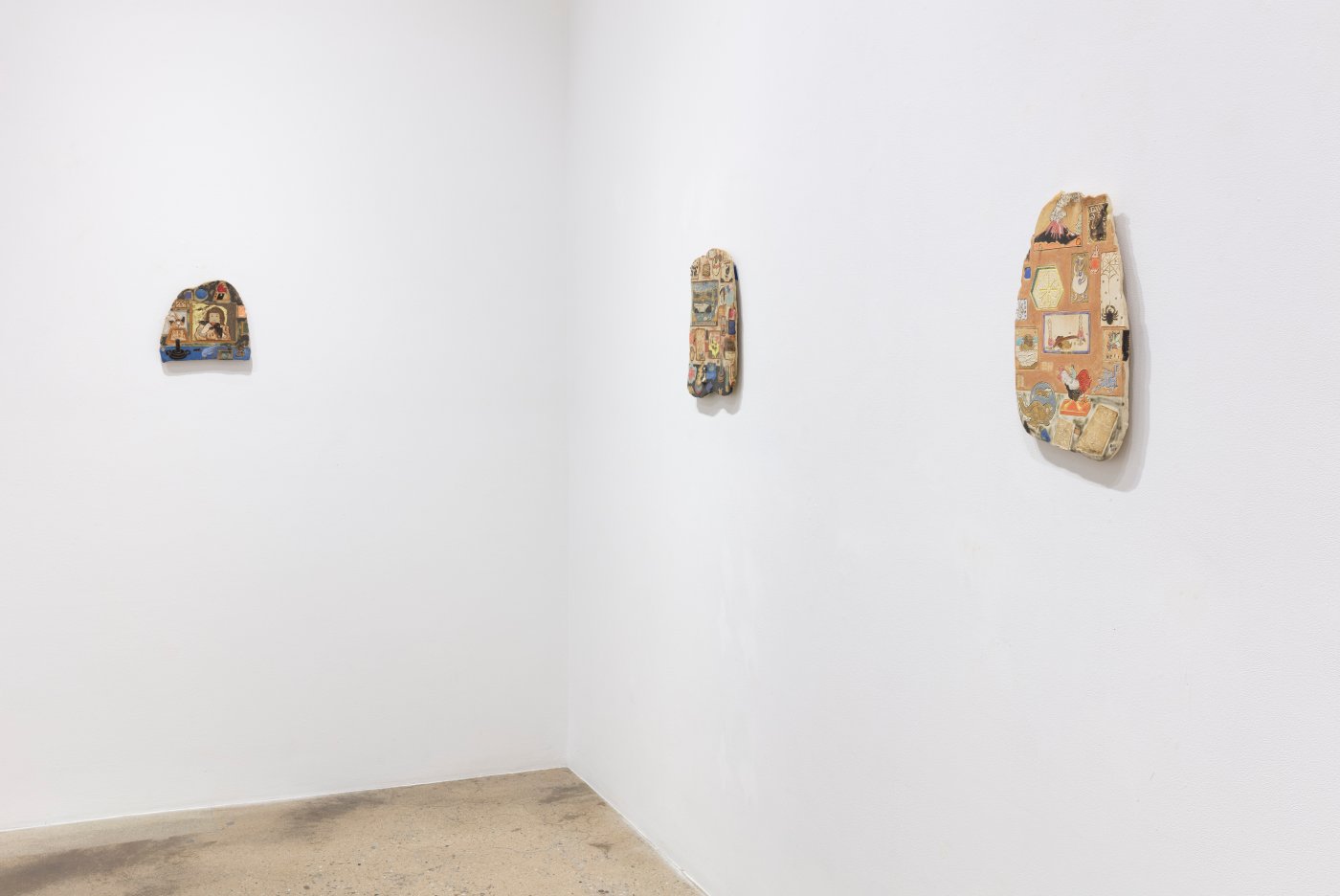 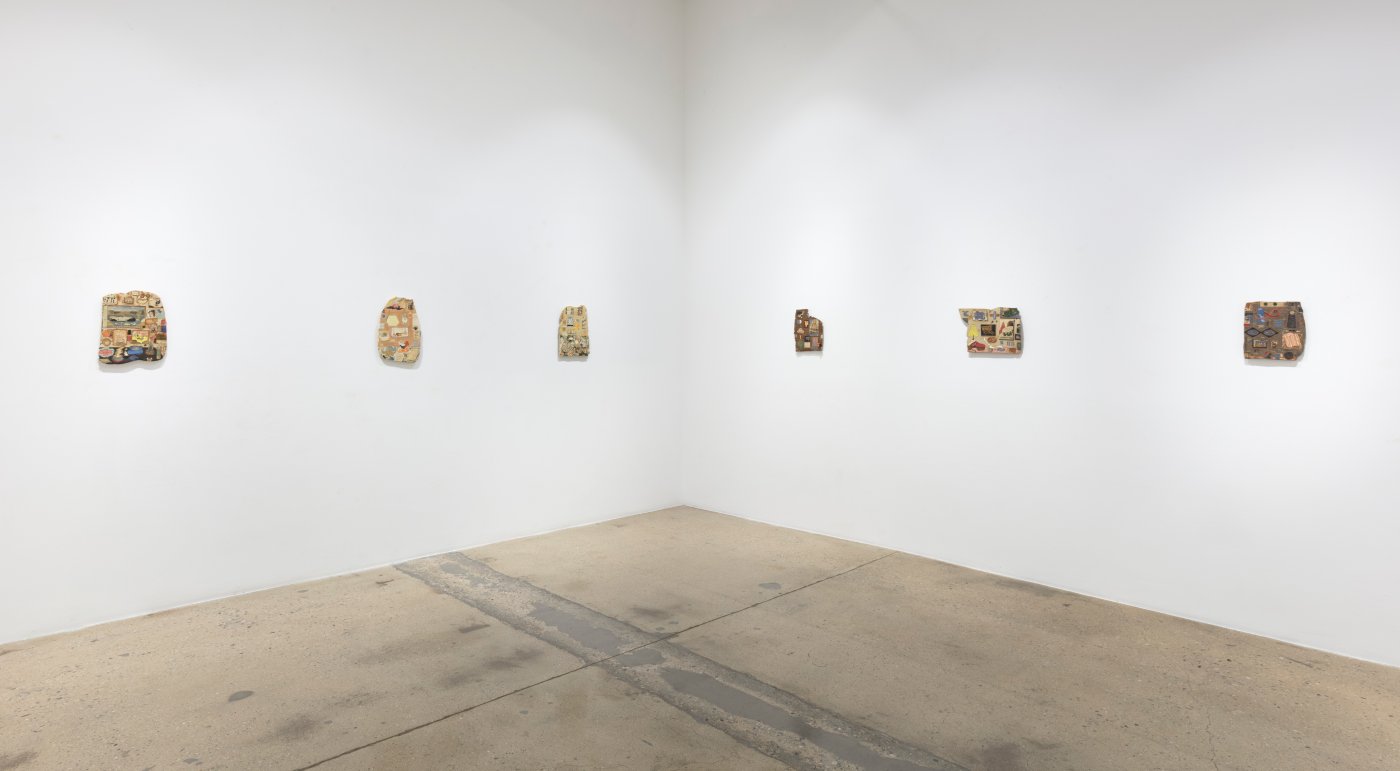 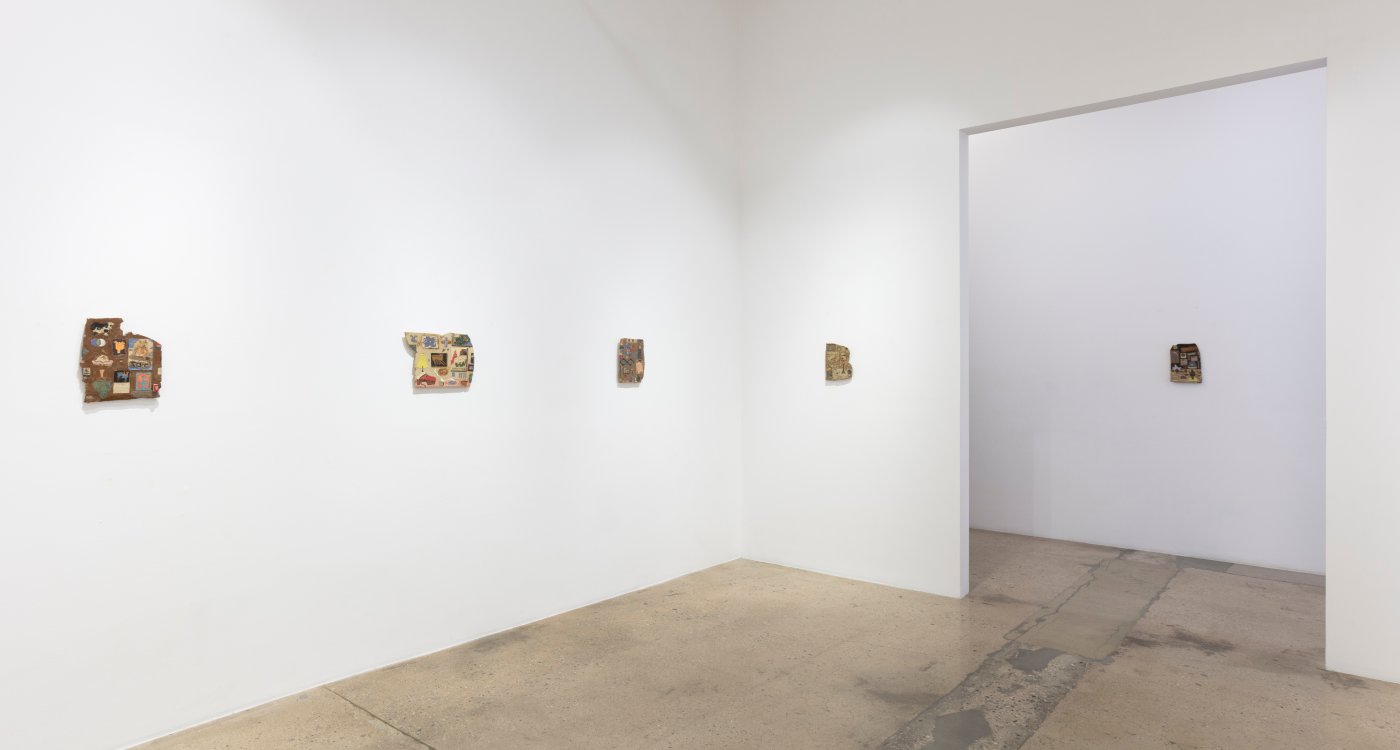 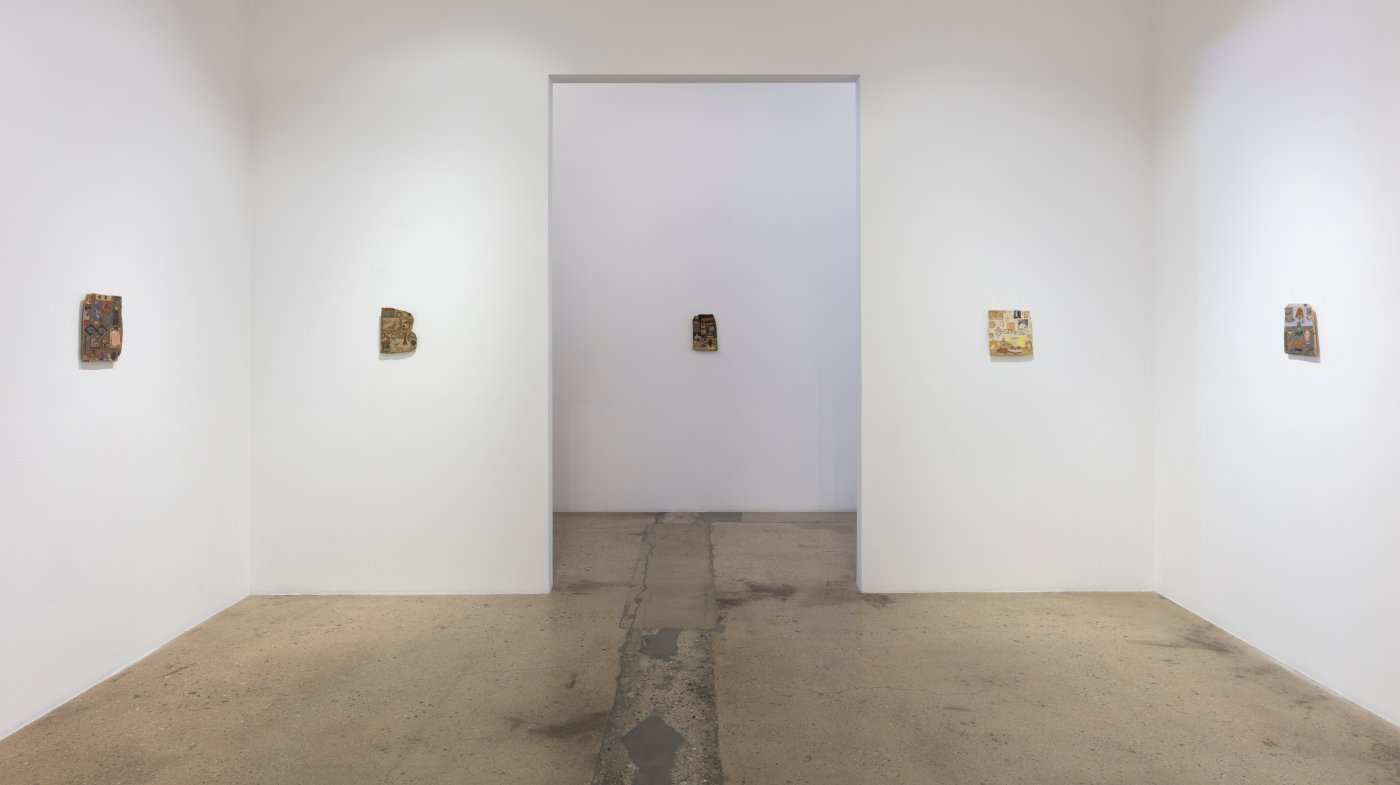 Each shows a salon-like interior with a myriad of disparate images. In one of the works, TXT, all of these images nicely coexist: an active volcano, a cover of the fictional Iowa Review, a spider hanging from its web, a round mammal standing on its hind legs, a hexagonal trade sign with a leaf pattern, an ad with contorted fingers and the word “DONT,” a houseboat at sea with a palm tree at the edge of land, a seesaw with a four-headed person on one end and three-headed person at the other, a sculpture of a trumpet-blowing figure riding a rooster, a headless pegasus with a large “P” where it’s head would be, a pollywog in an enclosed glass sphere with a tailed frog just outside the glass. In his essay on the artist in the new monograph, Ceramic Paintings, Andrew Berardini writes, “This is a world of dreams and memories that erupt into pictures, they are signs of the new flowers and new stars sprinkling over the fields and skies of the fleeting, empty outer world. A sign of what is and what was and had been and can be and it is only ever a picture away.”

The gallery is also releasing two publications to coincide with Tableaux Vivant. Kevin McNamee-Tweed: Ceramic Paintings is the artist’s first comprehensive monograph on his ceramic works. It includes essays by Andrew Berardini and John Dilg as well as an interview by Lauren Moya Ford. It is bound in cloth, has 248 pages and 123 color plates. It will be available on August 1st on the gallery’s new e-commerce website and is $75 plus shipping and handling. The second publication, Tableaux Vivant, consists of fifty new poems by McNamee-Tweed, illustrations of recent works including those in the exhibition, and a constellation of related material. It will also be available on the gallery’s e-commerce website.

Kevin McNamee-Tweed (b. 1984) grew up near Chapel Hill, North Carolina before studying at New York University where he earned a BFA (2008). After living in Austin, Texas for seven years, he moved to Iowa City to enroll in the MFA program at the University of Iowa where he earned an MFA (2020). He has had solo exhibitions at The Still House Group, New York (2016); Rod Barton, London (2017); Shrine Gallery, New York (2018); Devening Projects, Chicago (2019) and Steve Turner, Los Angeles (2019). Tableaux Vivant is his second solo exhibition at Steve Turner. McNamee-Tweed lives and works in Iowa City.