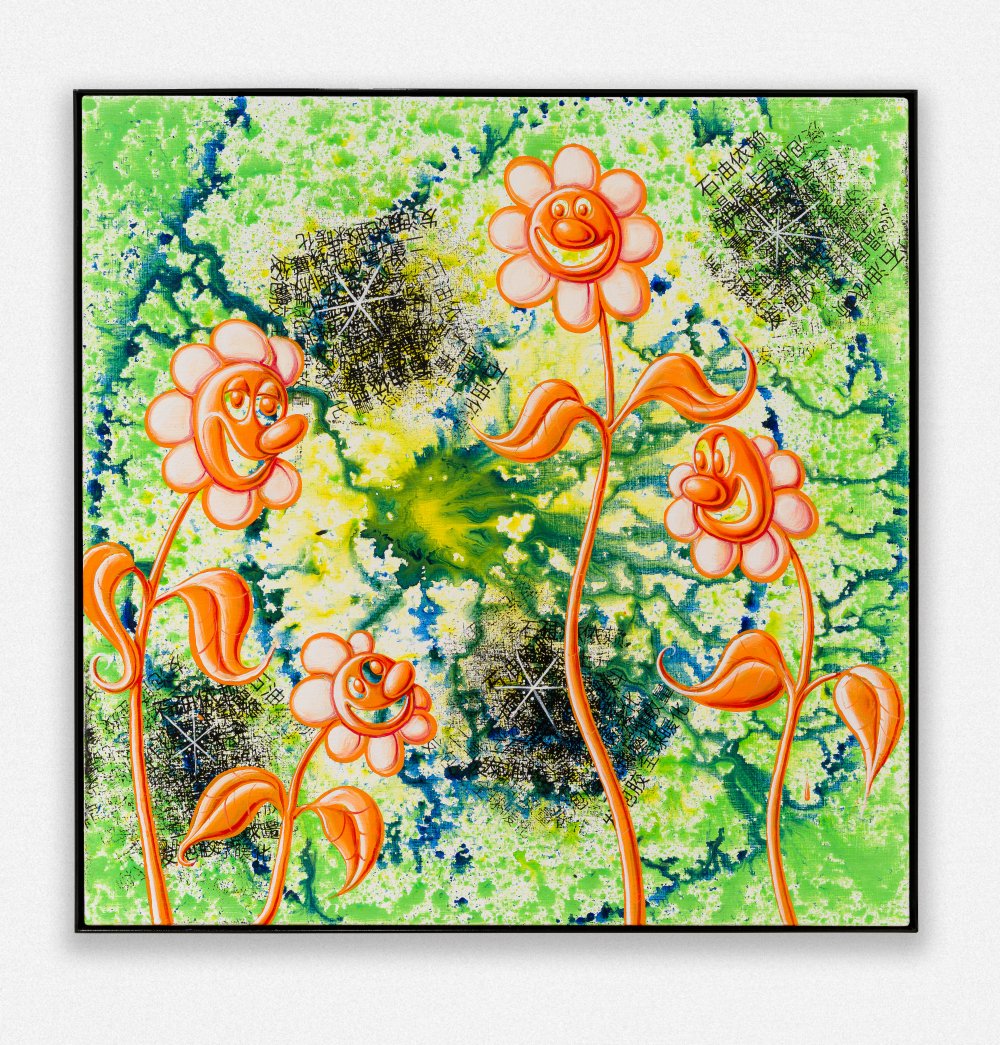 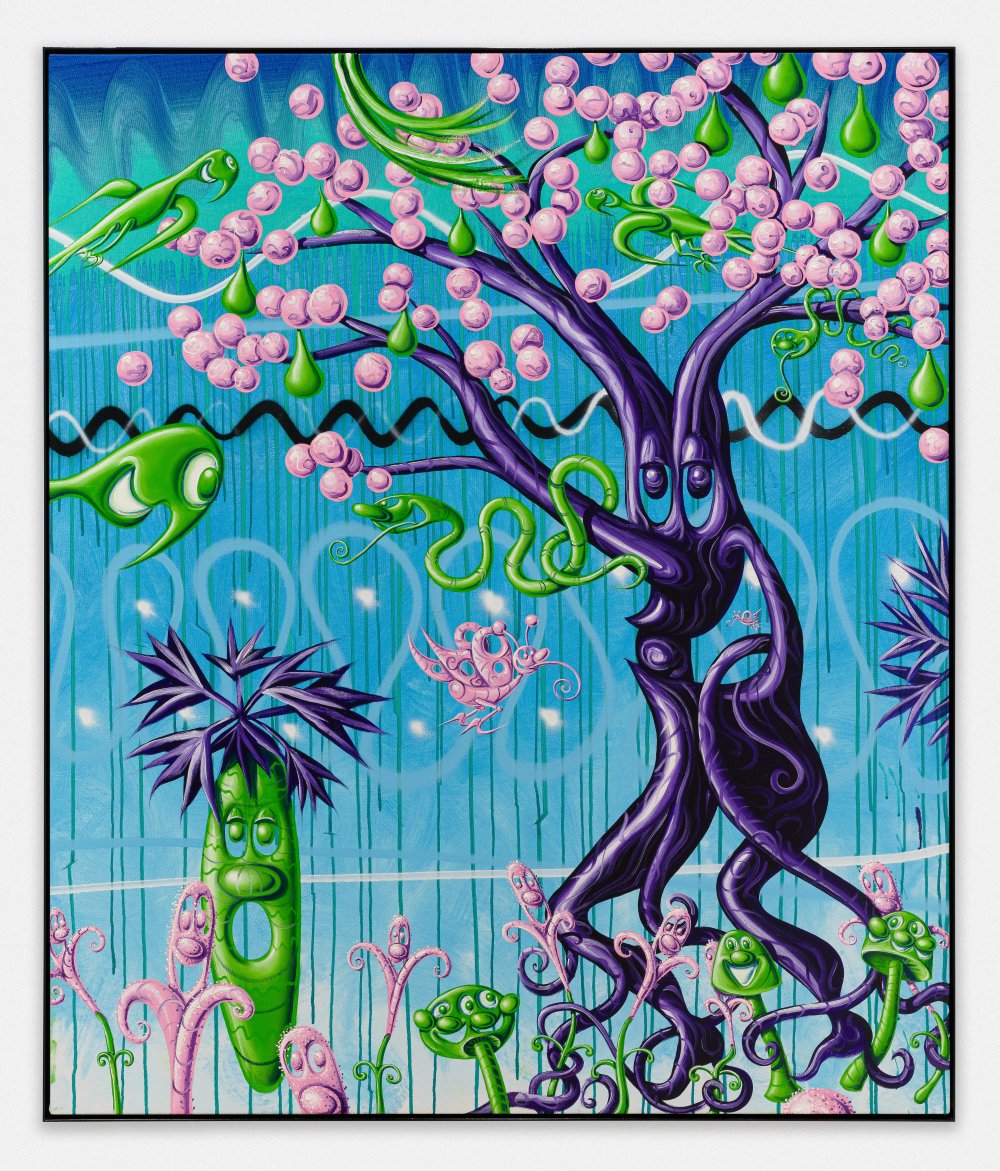 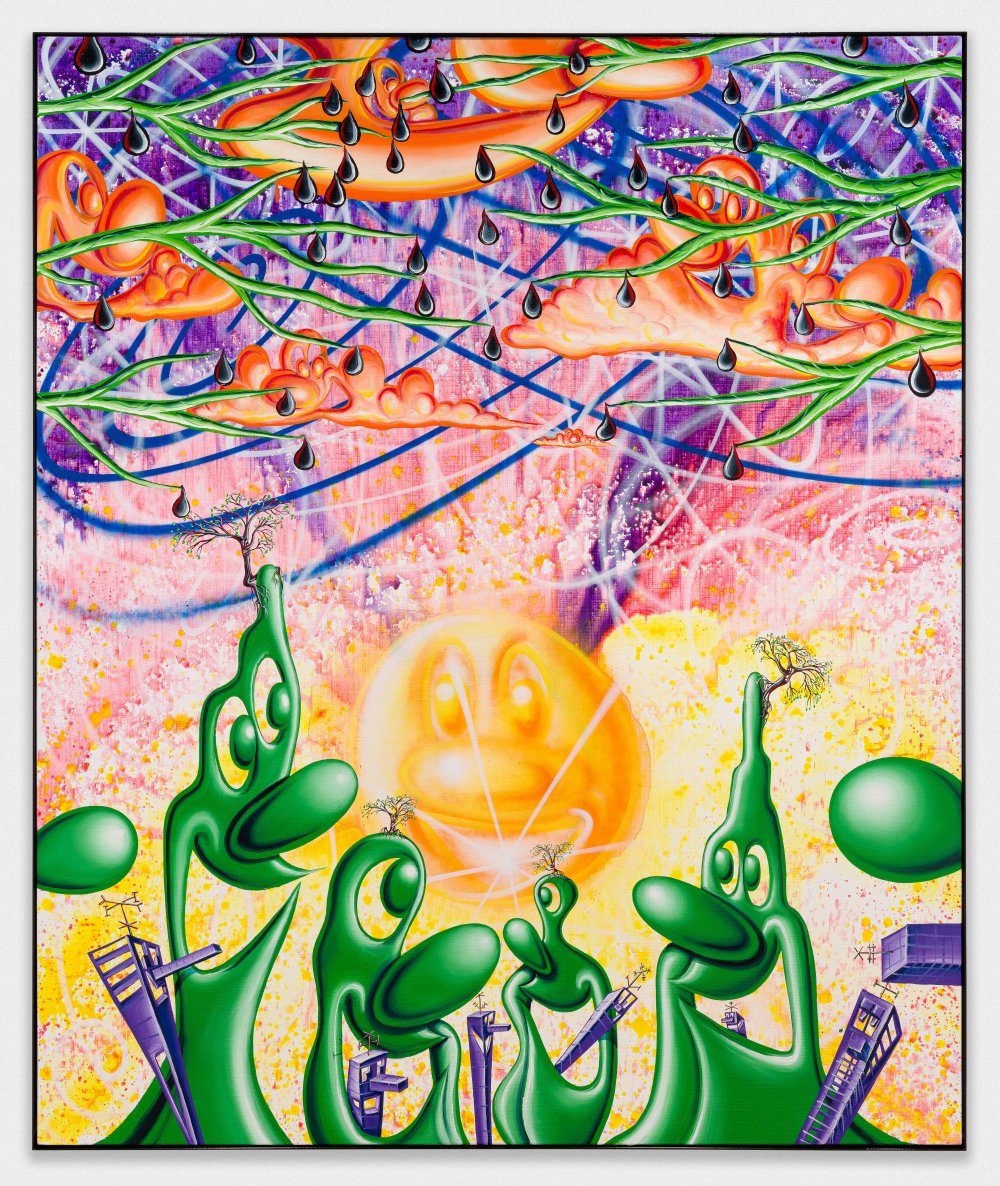 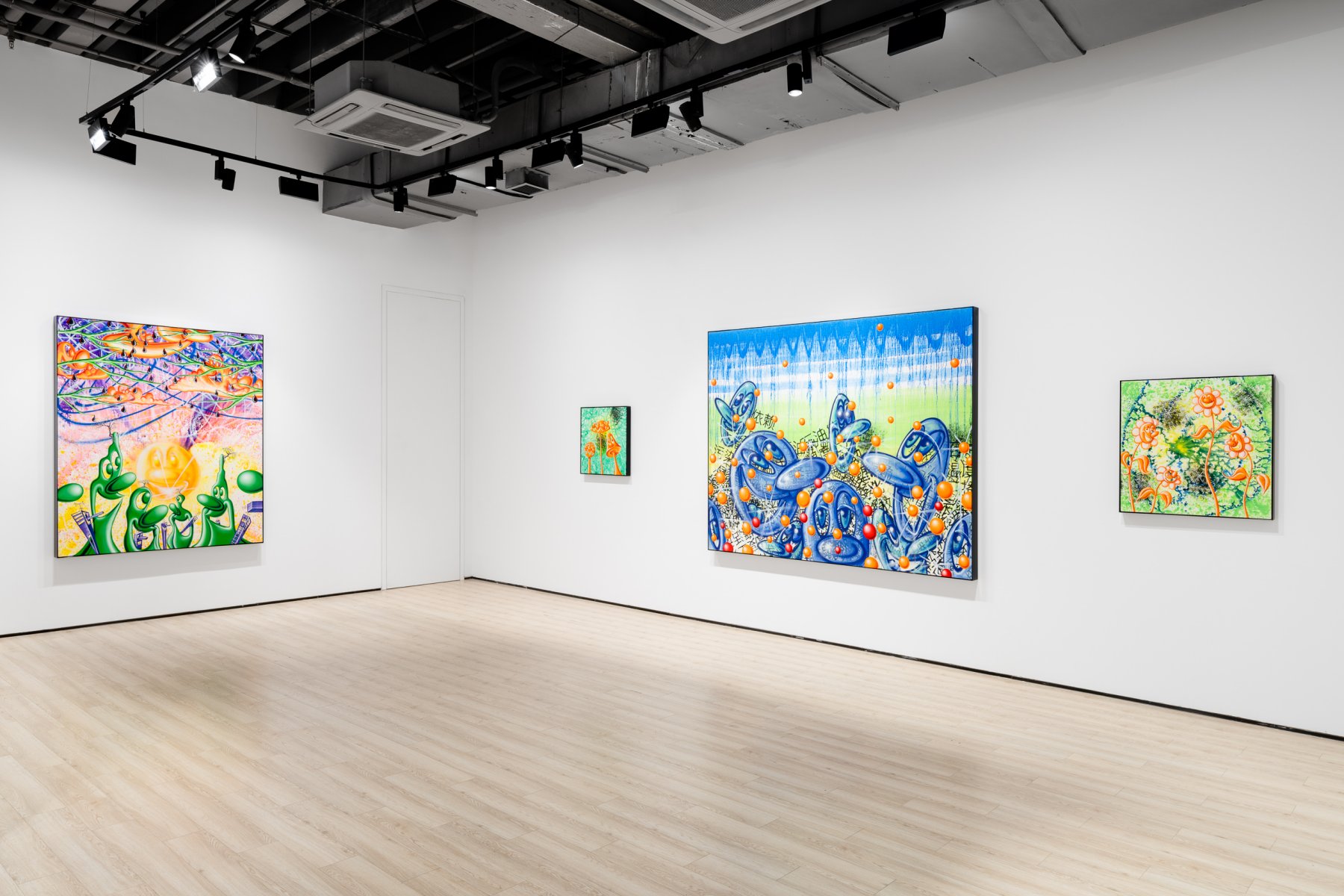 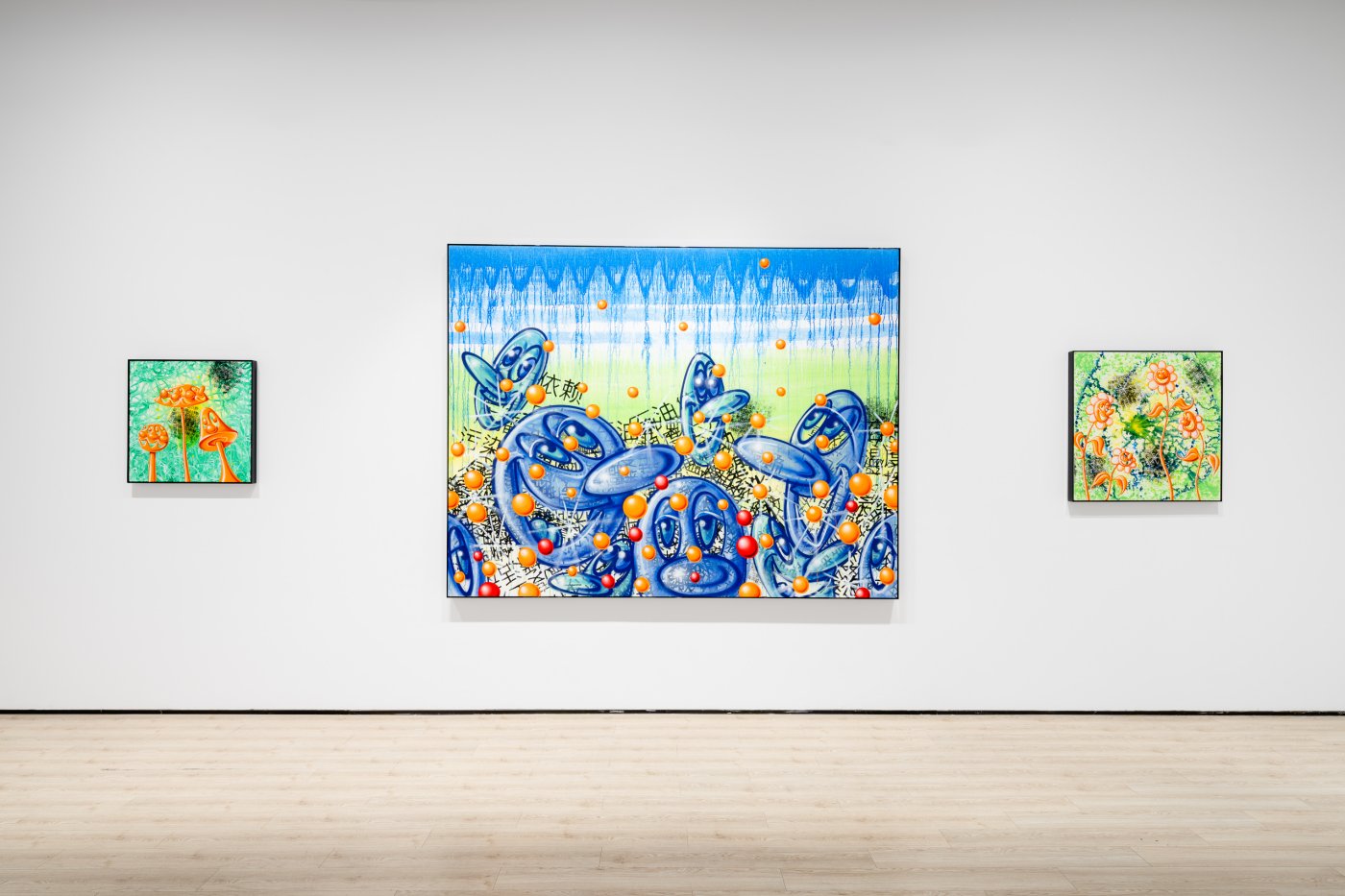 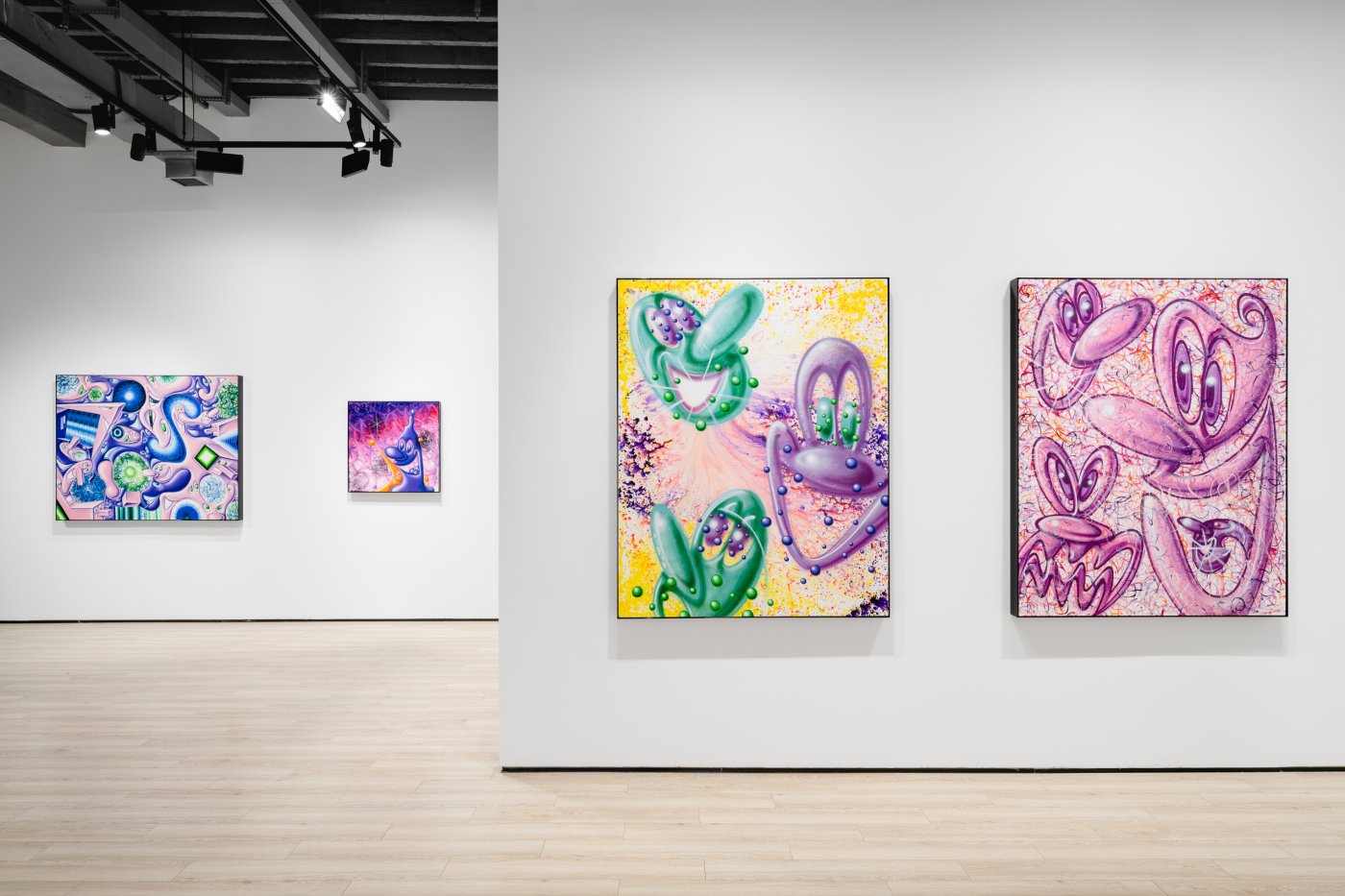 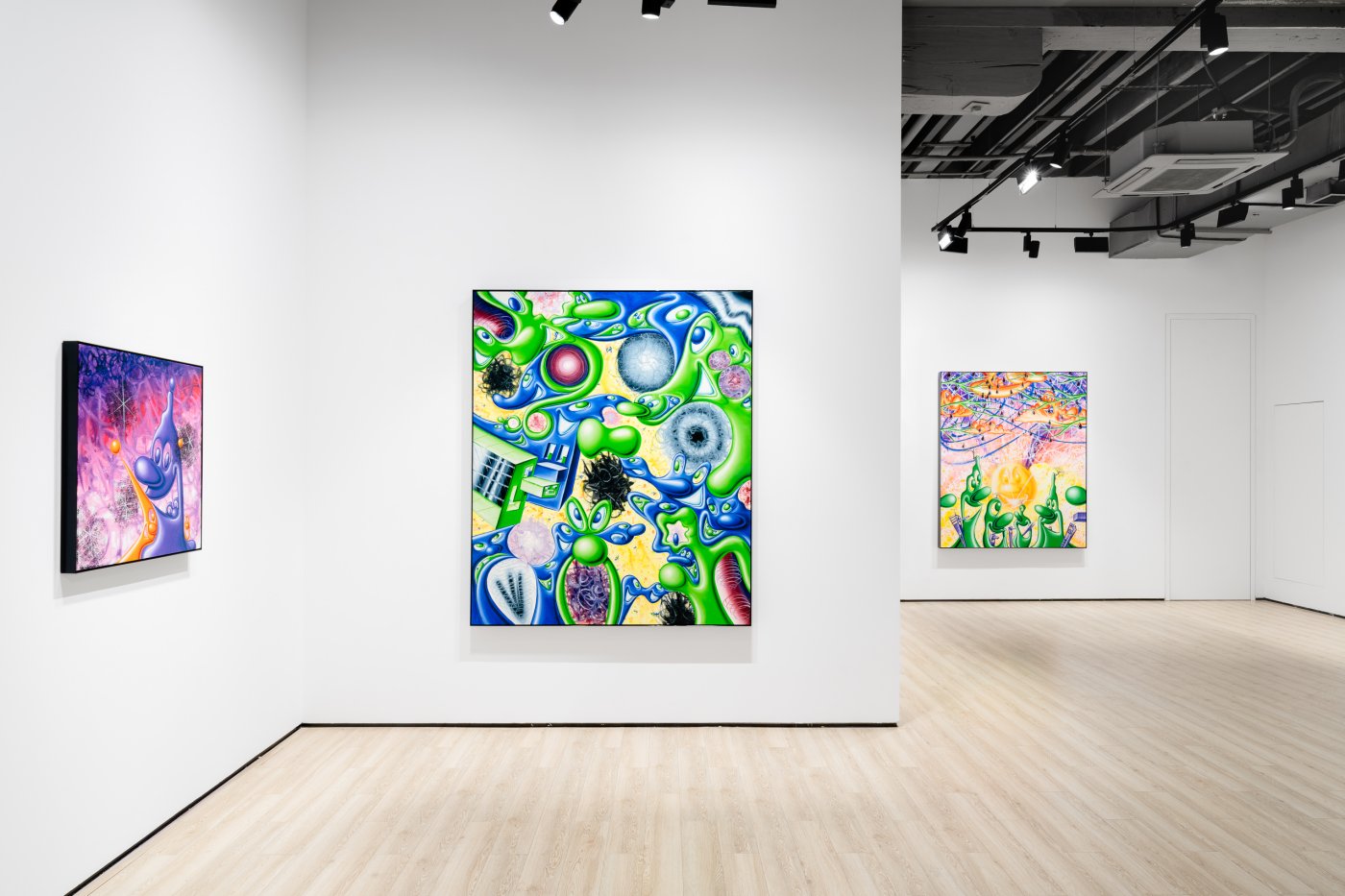 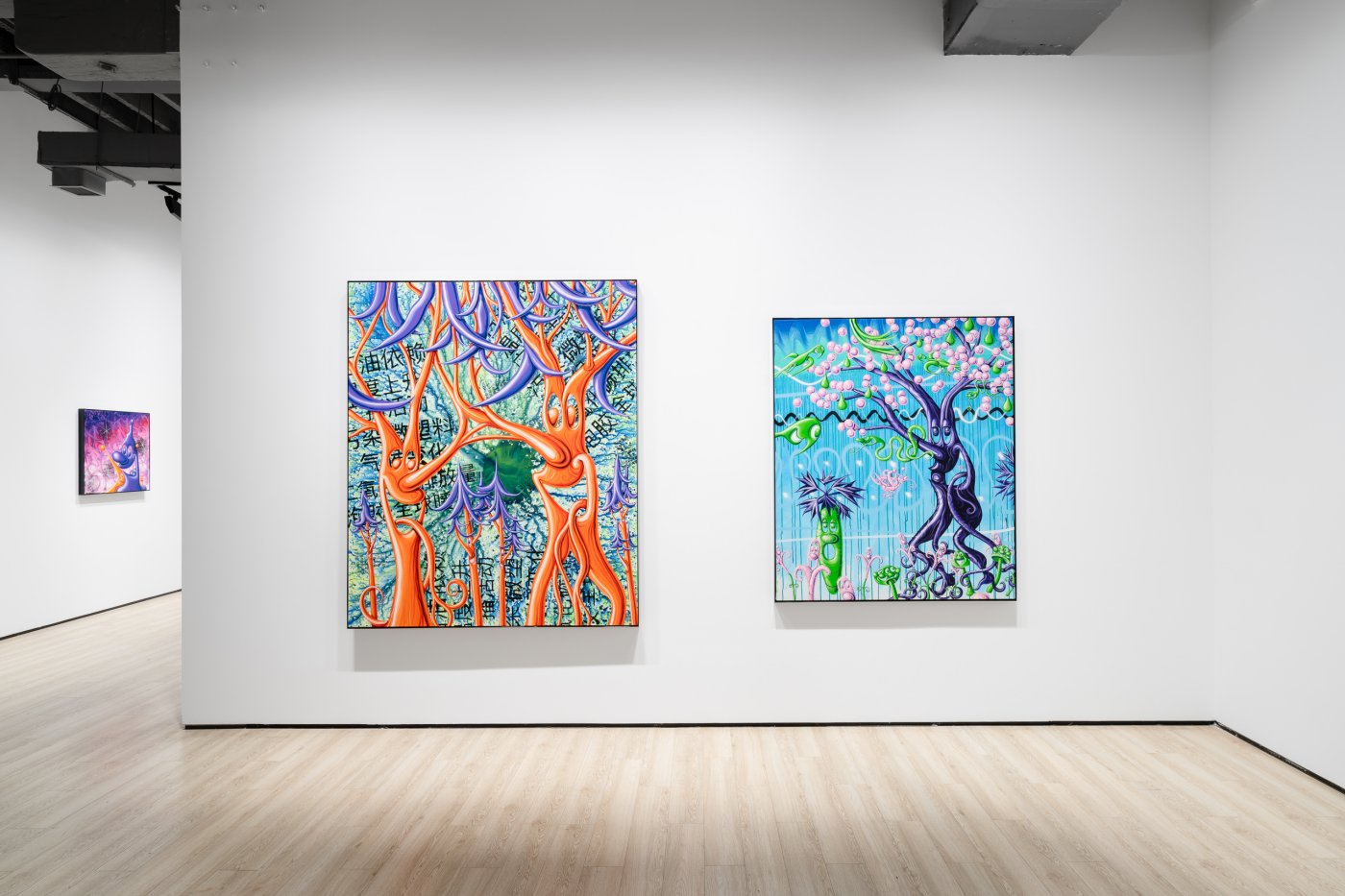 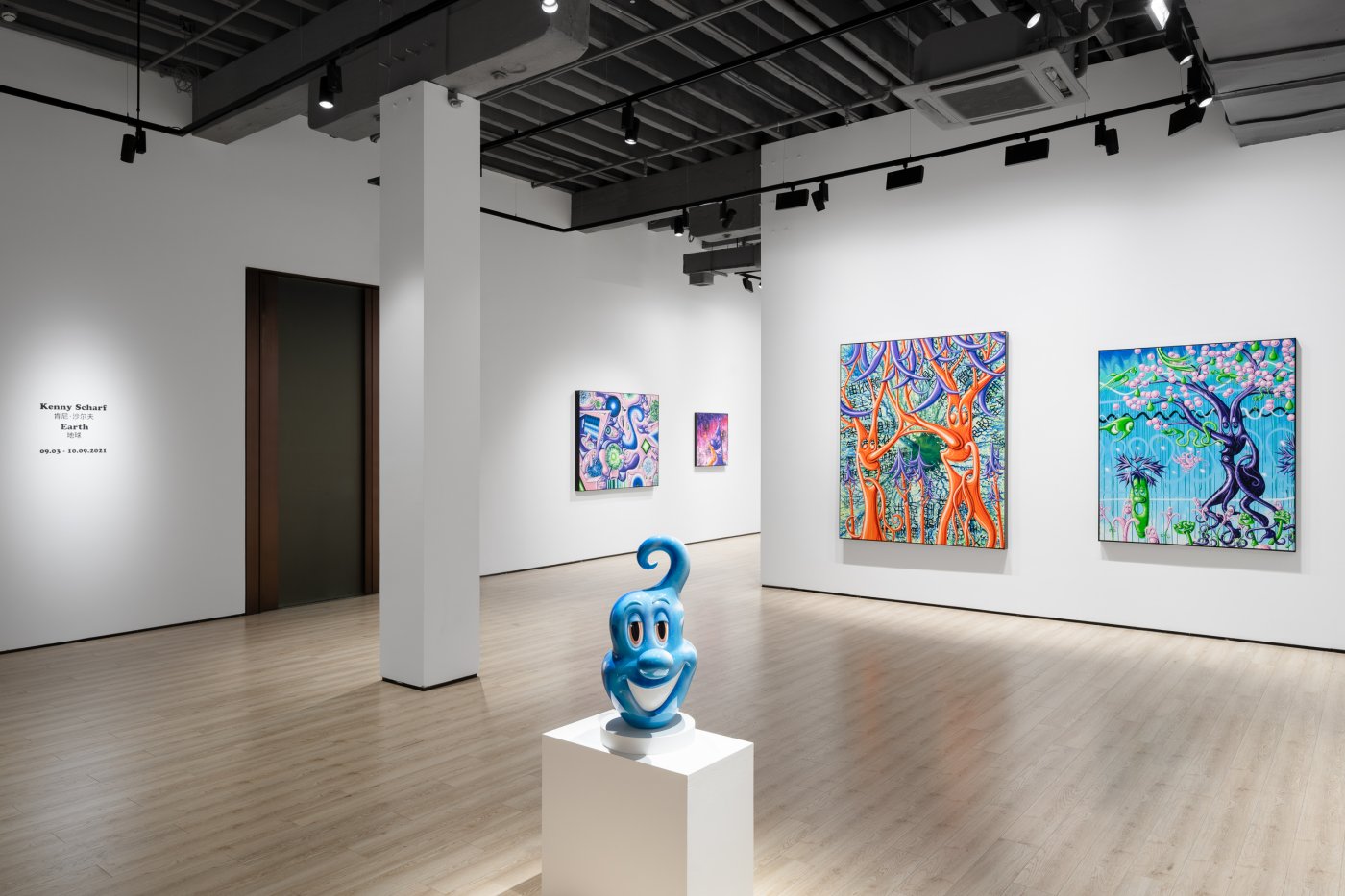 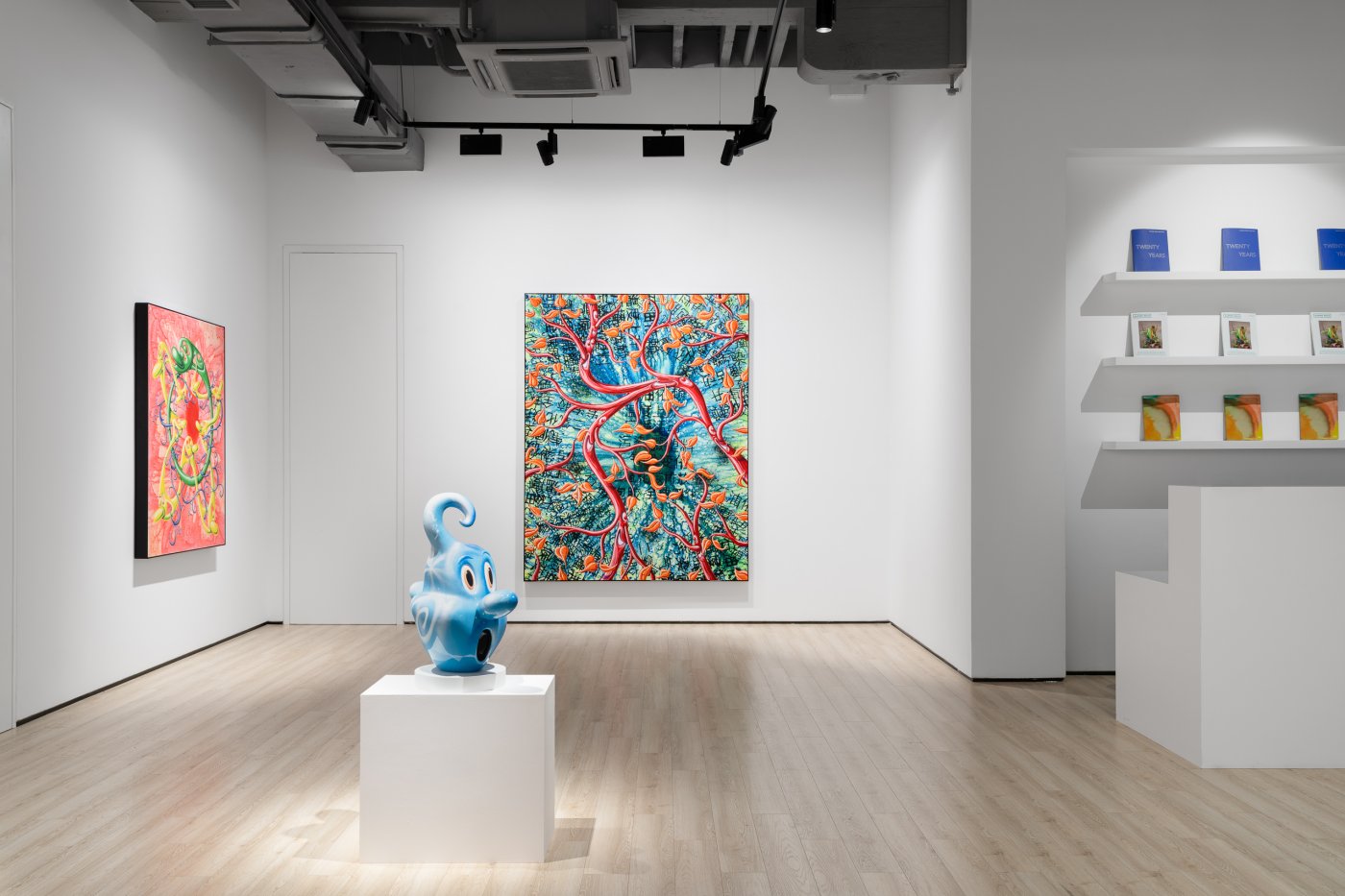 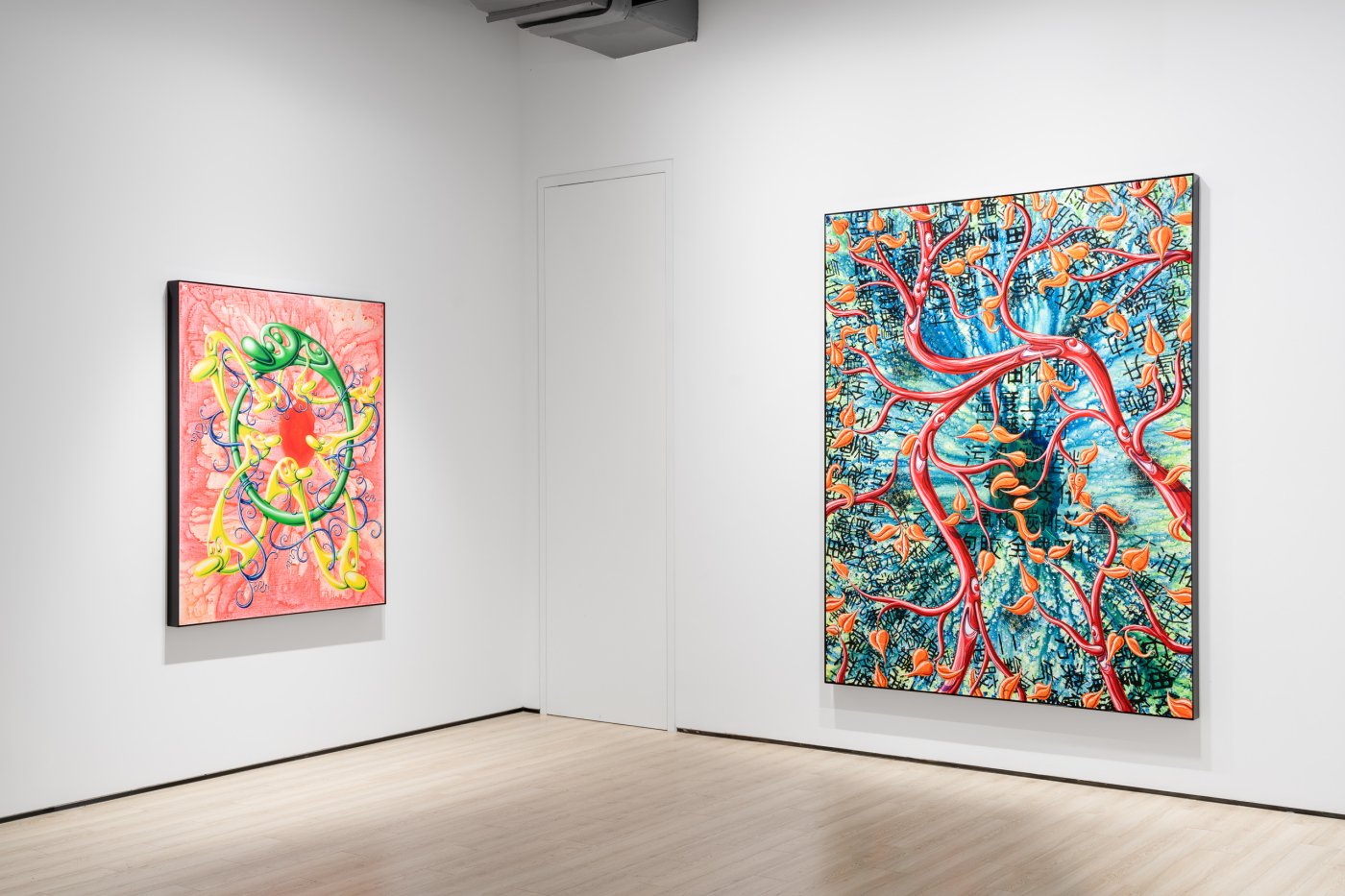 In the early 1980s, in pursuit of his hero Andy Warhol, Kenny Scharf moved from Los Angeles to New York at age 19. There, Scharf met Jean-Michel Basquiat, Keith Haring and a group of like-minded artists. Together they brought Pop Art to the streets, put Warhol’s “Soup Cans” onto the stage and started a new movement.

Scharf’s work resorts to pop culture and the politics of graffiti, but unlike Basquiat or Haring, his graphic motif and forms were inspired by cartoons such as The Flintstones Season (1960) and The Jetsons (1962). Not only did he retain the narrative in the animation, but in many cases, the paintings portray fragments or parts of an animation. In Scharf’s fictive imagination, seldomly are there human characters; instead, cartoon animals, plants and unidentified species form a self-contained eco-system. Bright colors like red, yellow, blue, green and purple are combined to create a strong Pop and Surrealistic undertone.

As early as the 1960s, Leo Steinberg insightfully pointed out that an important hallmark of the rise of Pop Art was what he called the “objectification” and “dehumanization” in art. That is, “oil paint here is no longer used as a medium of transformation; it disregards the human subject…… there is also an alluded absence, an absence of humanity in an artificial environment. Thus, only the object – the trace of man-made object – are left behind, and in the absence of the human, these traces eventually become objects”[1]. Although Steinberg’s discourse is directed at Jasper Johns, it comes to full expression in works by Rauschenberg and Warhol. However, for Scharf, he no longer pursues “objectification” and “dehumanization”. In contrast, he is driven by the universal humanization of objects, as well as the oppression and crisis brought upon human beings and the Earth. In this regard, he is more of a humanist.

Scharf adopts a (hyper) realistic approach for flat painting, intentionally weakening the brushwork and figuration to emphasize the unique textures of plants and animals in the painting——or more precisely, a plastic-like texture——as if the whole painting is a “little world of elves” made of plastic toys. The embodied species in the painting are all strangely shaped, with their eyes wide opened and teeth bared. It is impossible to tell whether they are joyful or angry, innocent or sinister, and it is difficult to say whether they are playful childhood memories of the artist or an imagined animistic virus……. Embodiment is not only reflected in the shaping of the alien species, but also the compositions. Obviously, whether as radiation, vortexor diagonally distributed, his paintings always convey a sense of dynamism. It is this sense of dynamism——not just wide-eyed gazes——that gives the painting or image its autonomy. According to art historian Horst Bredekamp, here the image is not merely a bearer or being passively produced, but an active agent of creation and action.[2] In Scharf’s case, the embodied species is not a human variant or anthropomorphic-species, but a new natural life-form that is parallel to human beings. “New nature” refers to what we once thought of as man-made, such as plastic and concrete, which are no longer opposite to nature, but a part of it. As a result, it is not so much the creativity of the artist but the innate desire for play of these (new) nature objects that creates images of their own.

This is Scharf’s first solo exhibition in mainland China. What is commendable is that he deliberately added Chinese characters in the background of certain paintings. These Chinese characters appear to be in clusters, as if they were printed. Among the vaguely distinguishable words are “plastic”, “petroleum”, “carbon dioxide emissions”, “global warming”, “pollution”, etc., all of which are related to ecology and environmental protection. Obviously, these words constitute the conceptual basis and backdrop of a world made of “non-human/objects” . In this respect, these printed Chinese characters not only refer to news dissemination but also a sort of connotation characteristic of Pop art. Just like the way Hal Foster sees melancholy and sadness in Warhol’s Golden Marilyn Monroe, in Scharf’s imagery, perils lurk behind the endless revelry.

It is for this reason that when the beings in Scharf’s paintings cast their innocent yet sinister gaze outside of the frame, the viewer not only experiences a fairy-tale-like pleasure but also fear and the uncanny. This inner tension is more or less related to the artist’s life experiences and trauma. In the 1980s, he witnessed how AIDS and drugs ravaged New York, and how a group of artists, including his good friends Keith Haring and Basquiat, passed away one by another in the epidemic. The incident was fatal for Scharf; it has been influencing his work until this day. It is not difficult to imagine how a cartoonish aesthetic—or in his own words, “Pop Surrealism”—could harbor such a deep sense of fear and unease. For those of us still deep in the throes of the COVID-19 pandemic, his work is like a fable of the Anthropocene, worthy of contemplation and rumination.