Advance appointments are encouraged and can be made by contacting: contact.newyork@alminerech.com

Almine Rech presents the first exhibition of Kenny Scharf with the gallery. Kenny Scharf: Dystopian Painting debuts 15 paintings and a sculpture by Scharf, showcasing the energy and depth of his singular artistic practice. 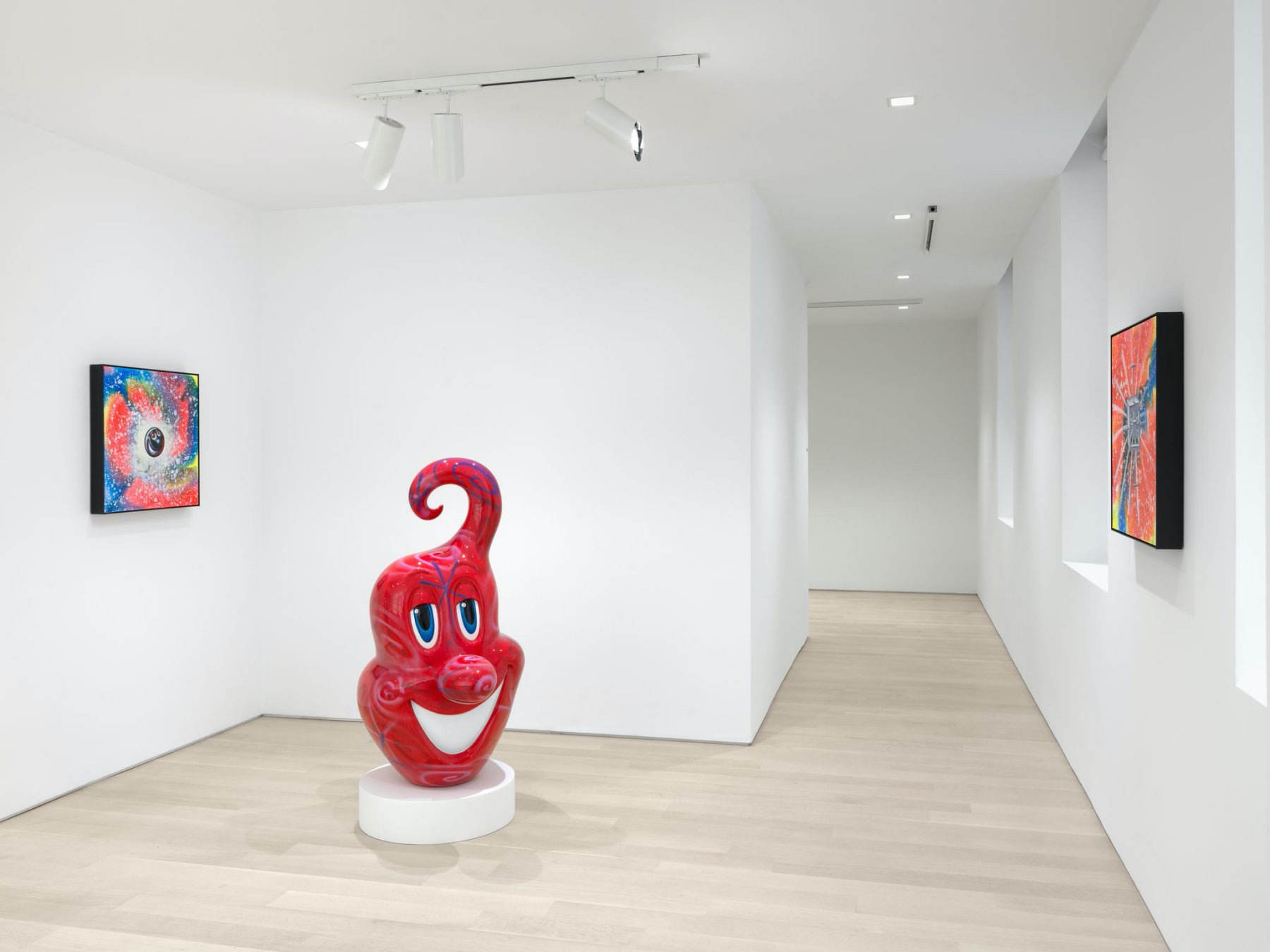 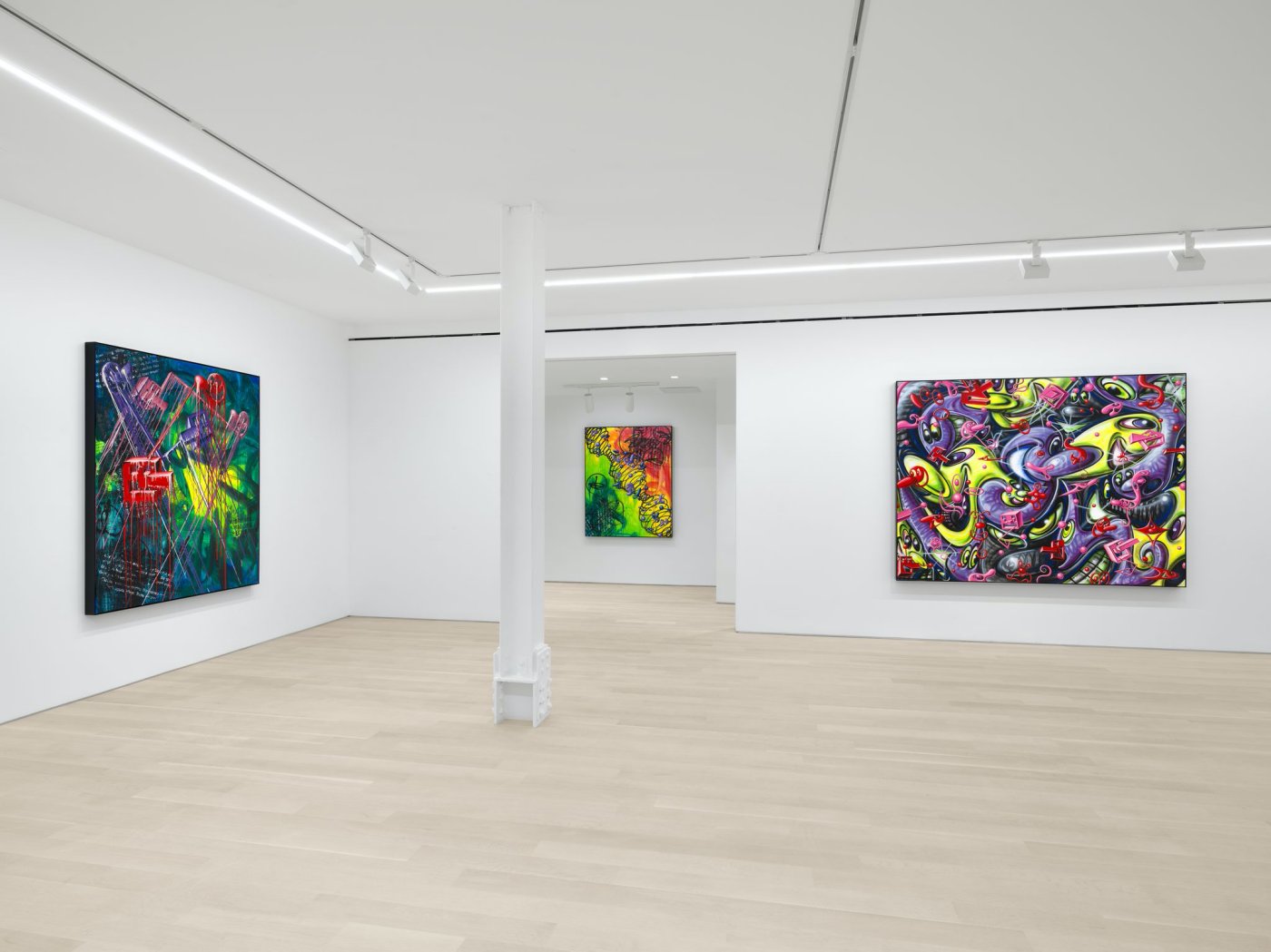 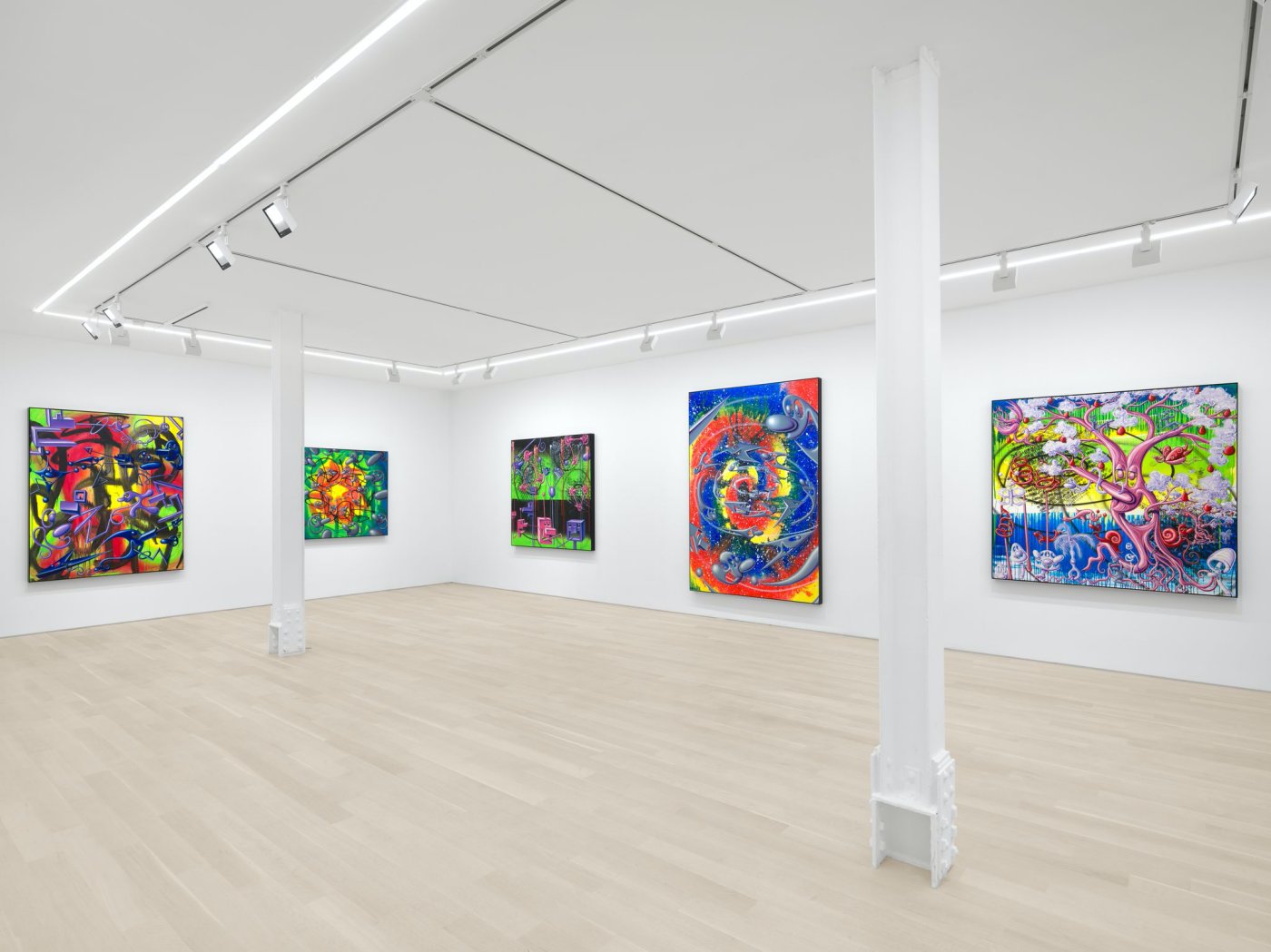 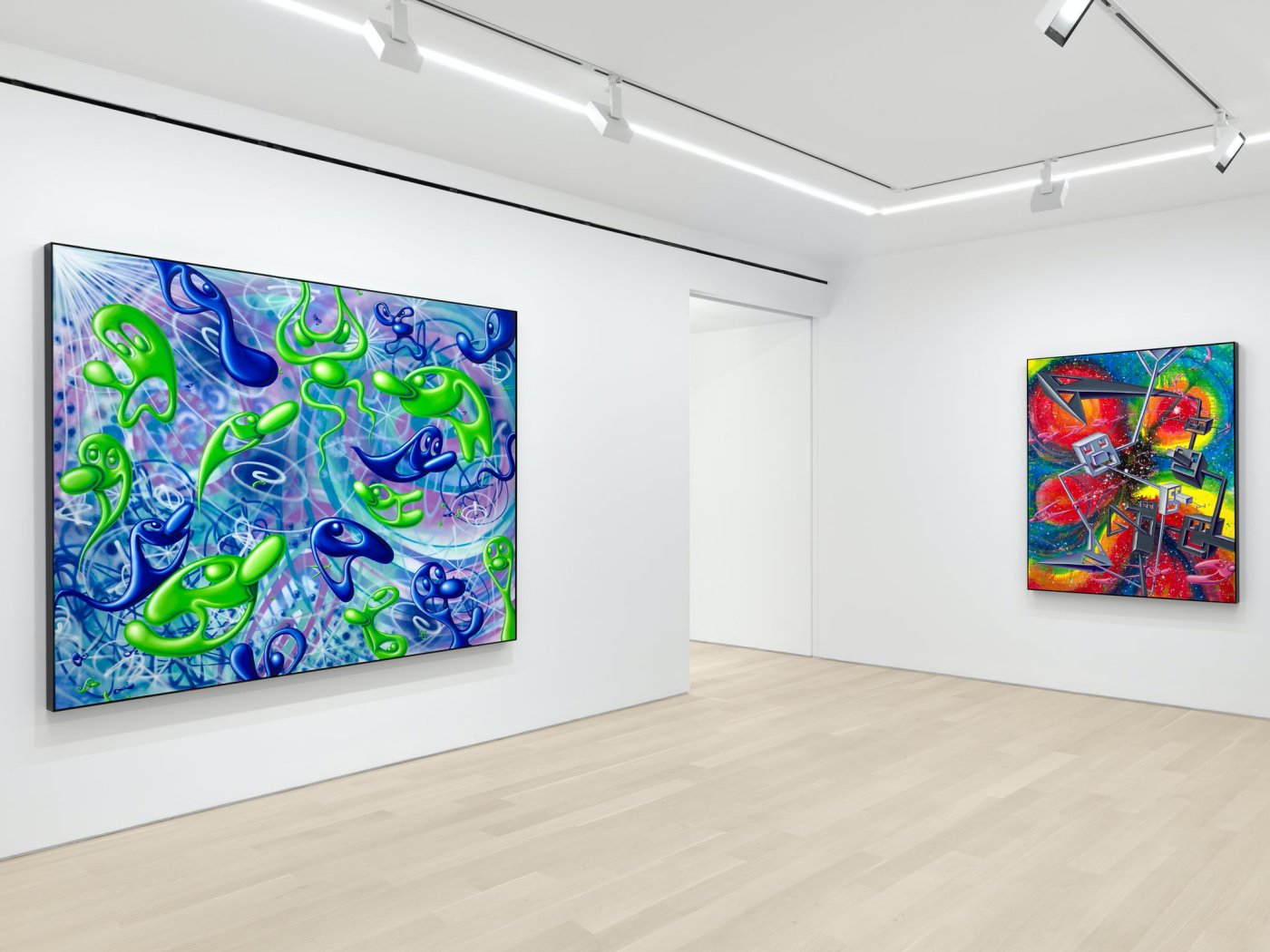 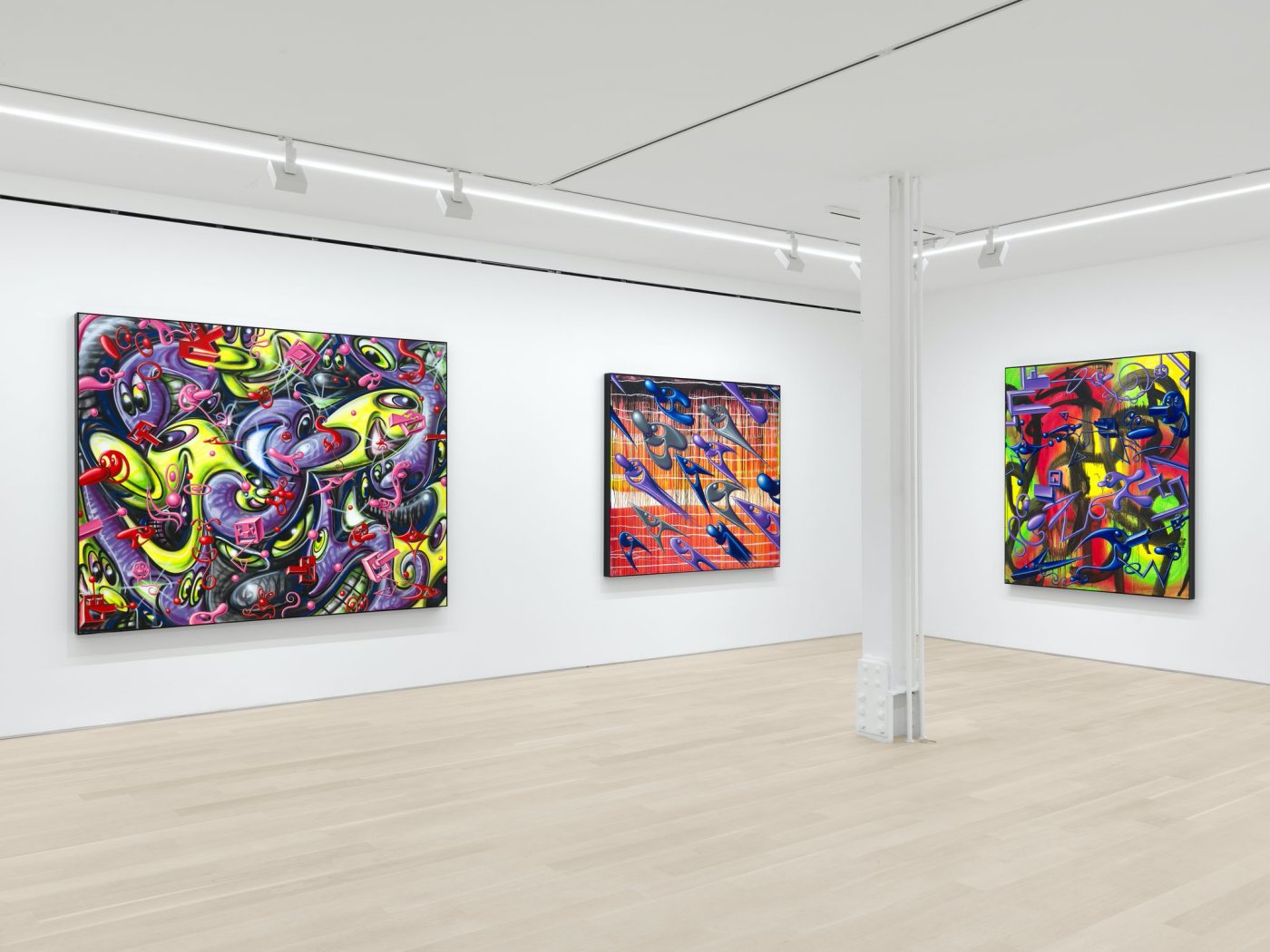 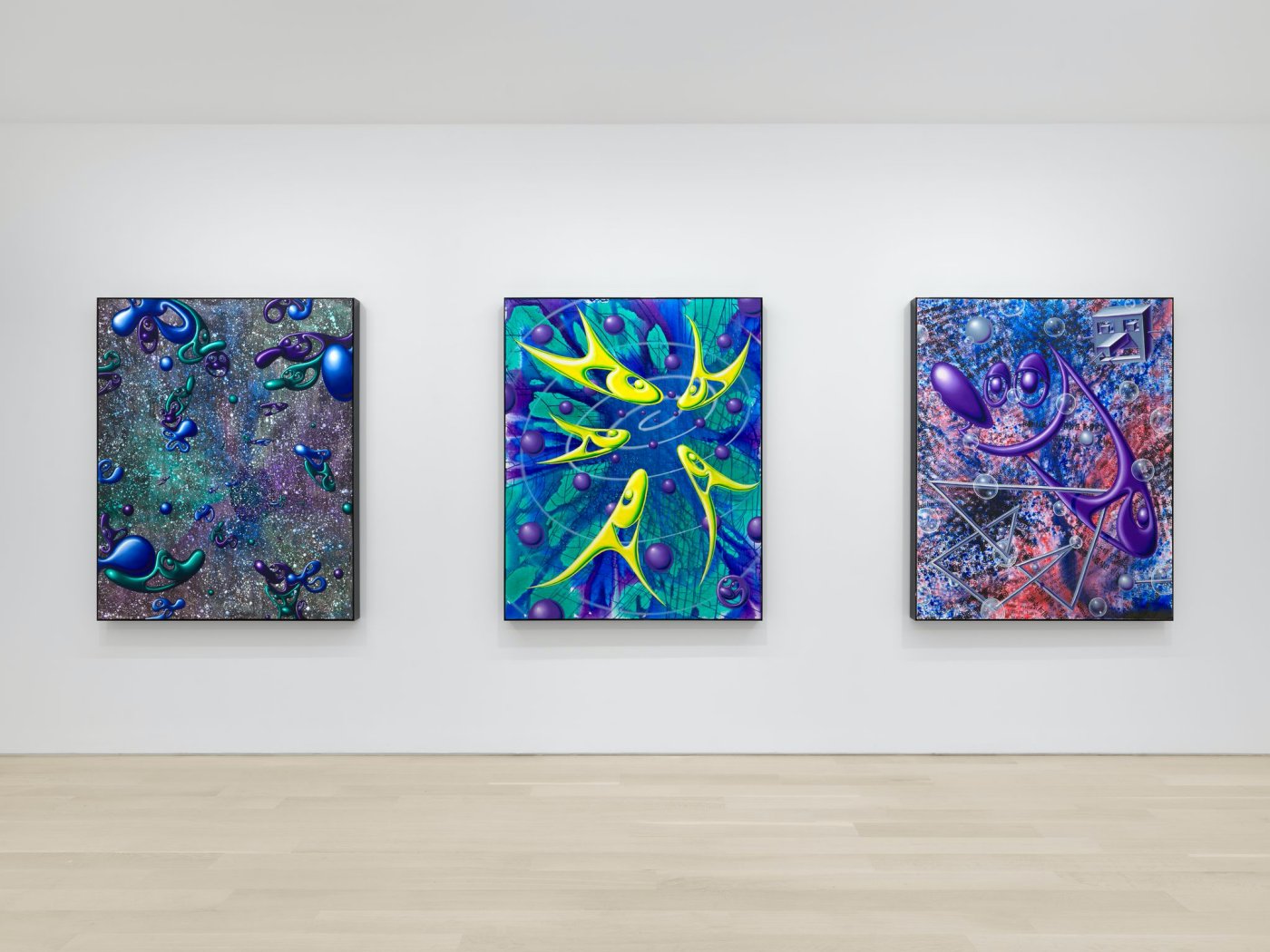 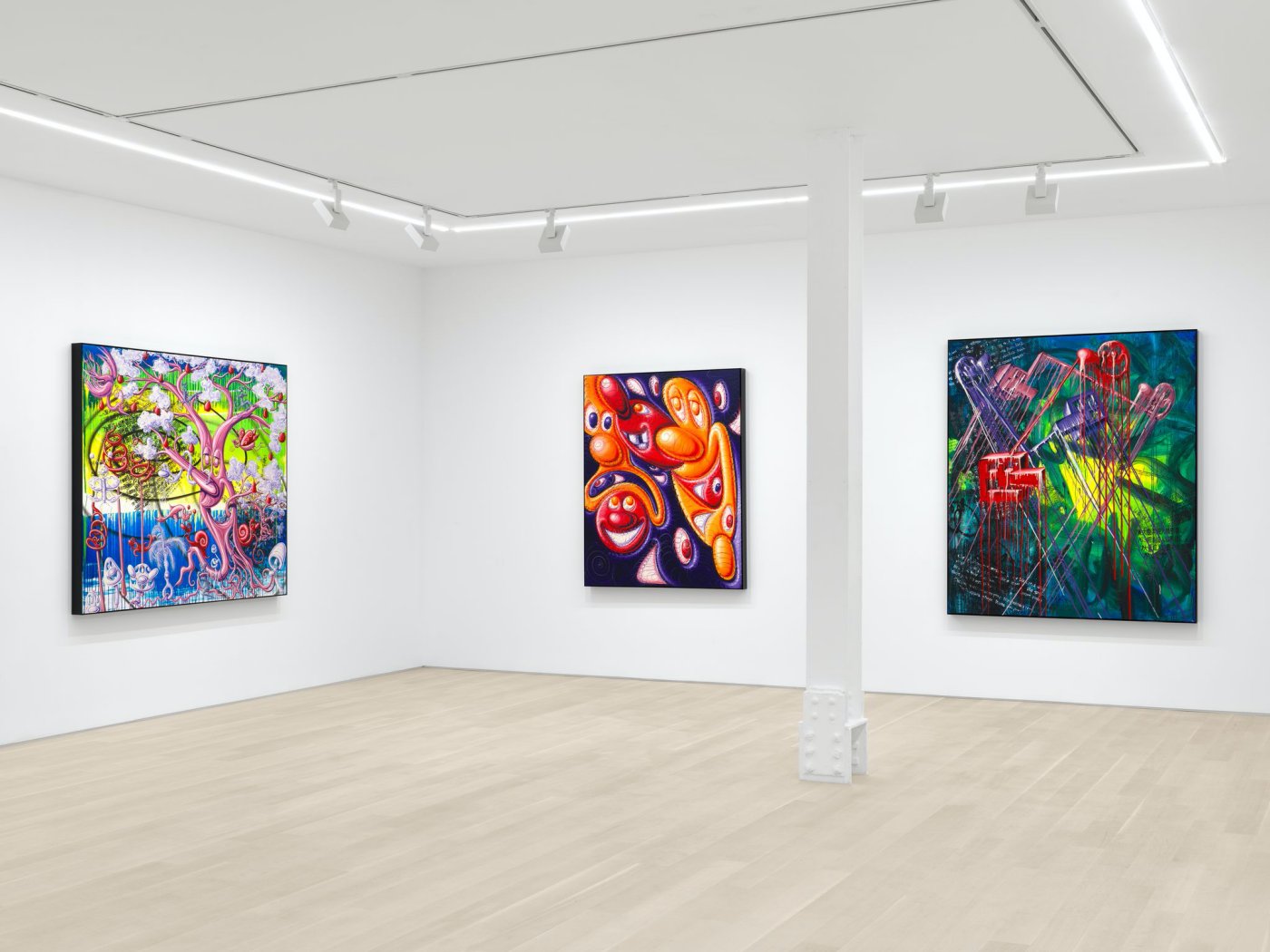 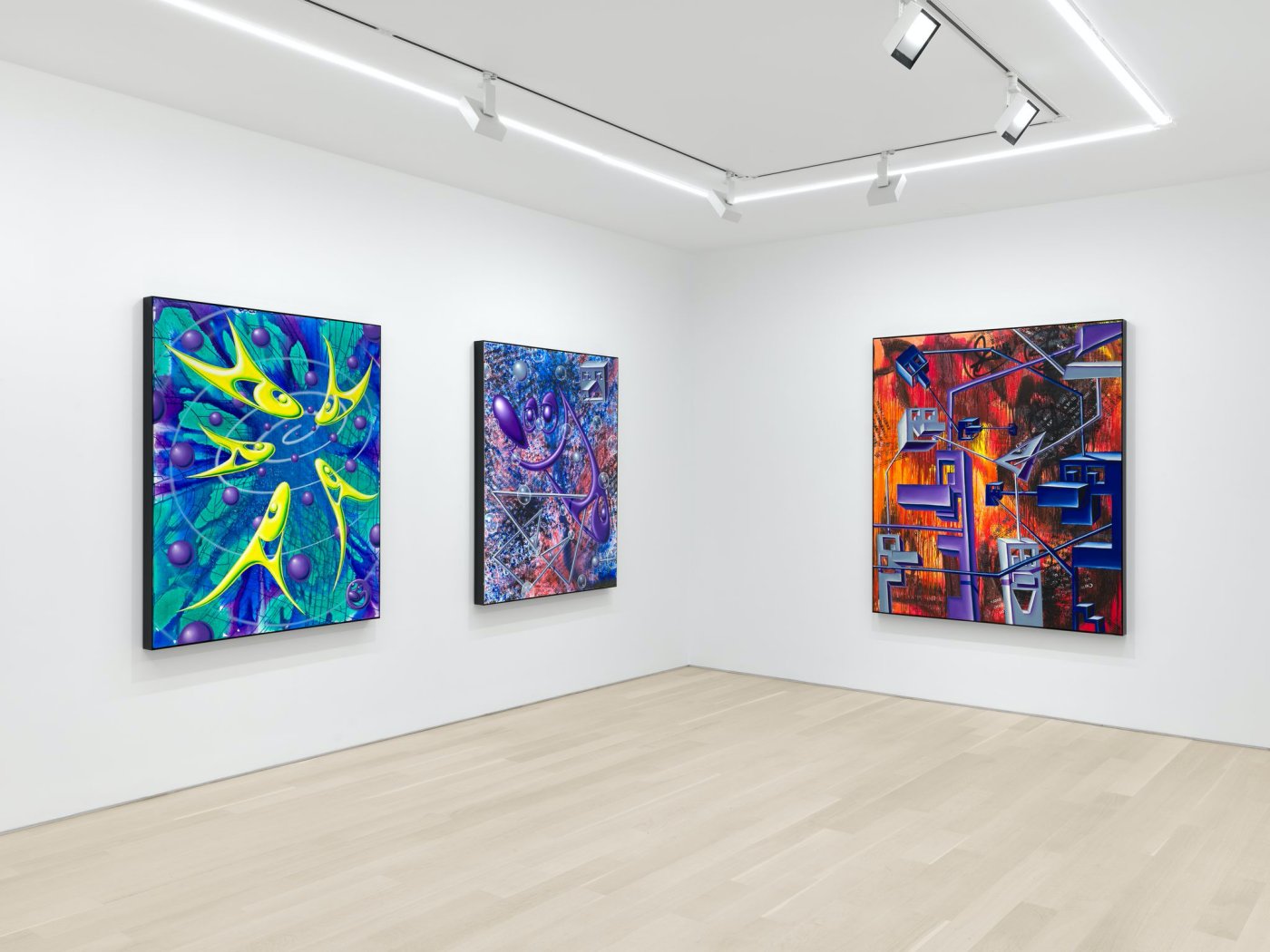 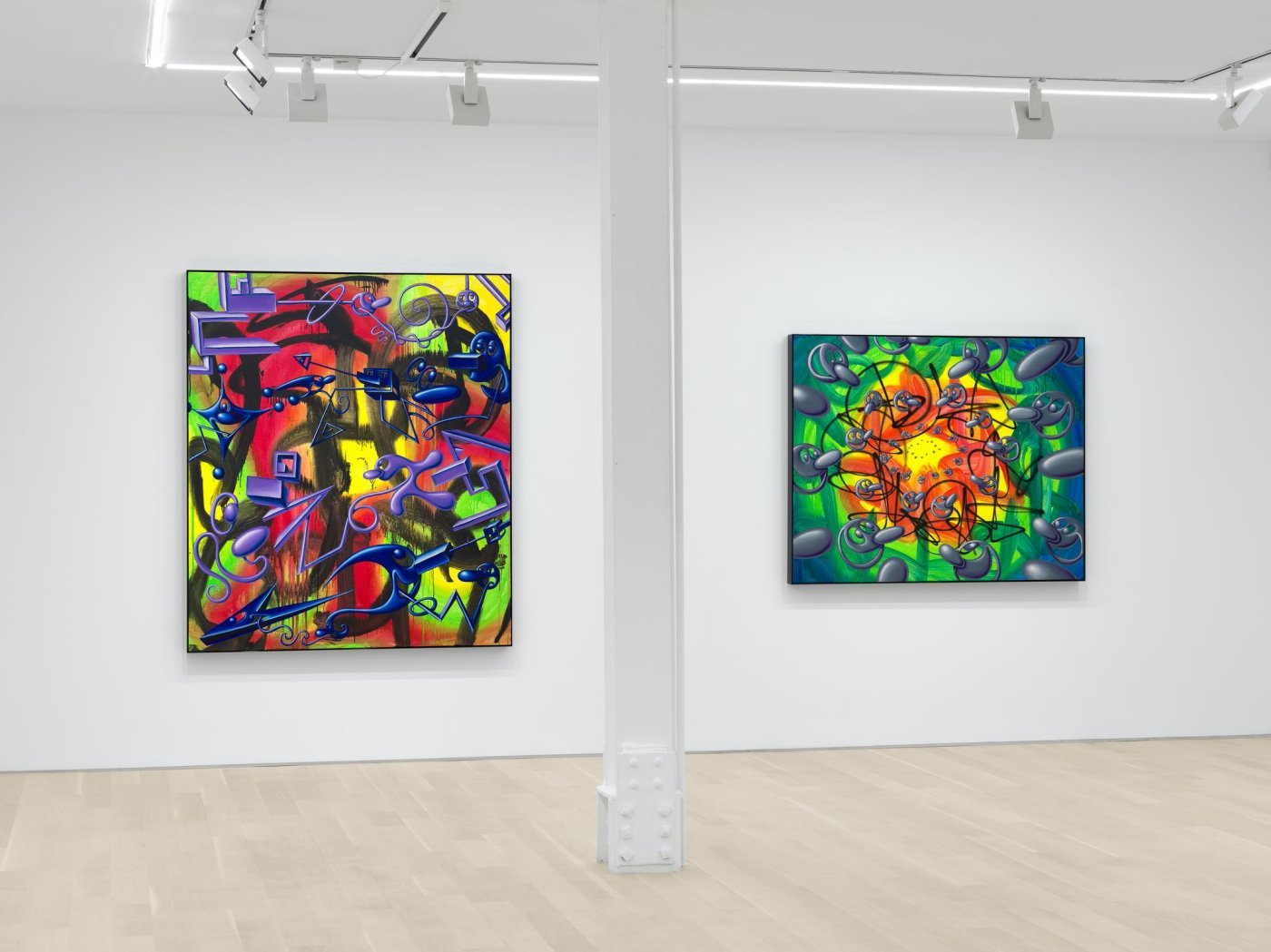 The artist’s new body of work reflects his continued immersion in the everyday life of urban society and circumstances of our time, blending quotidian and deeply relevant themes within the framework of his bright, frenetic canvases and enduring optimism.

There was a time, long ago, before the outbreak of COVID-19, when I thought of paintings by Kenny Scharf as suitable for a child’s bedroom. His cartoonish characters – chortling faces, curvaceous amphibians, tousled trees – floated through a psychedelic cosmos bursting with such buoyant and cheerful spirits that they mirrored a child’s delight in all things fanciful and monstrous.

Funny, how the temperature of a time can affect a person’s vision. Fabulous, how many ways one can read a painting.

It’s April of 2020, and the fever dreams in Scharf’s new paintings look less like representations of exuberance than grotesque depictions of a lethal bioweapon aimed at humankind in retaliation for its prolonged abuse of our planet. As yet, we have no defense, except to barricade ourselves in our homes, and behind masks that hide the expressions of terror, anger, dread and grit that Scharf’s defiant party animals display.

No wonder they’re jumping for joy. As signs of a spreading contagion, they’ve never had it so good – not since the AIDS pandemic of the 1980’s, their actual inspiration. In those days, testing positive for the HIV virus was a death sentence. With COVID-19, that is not necessarily the case. But its rapid-fire spread has engulfed us in restriction, alarm, and grief. We live free, but at a loss.

Still, we do live. As Scharf would say, we might as well enjoy it. That’s our other defense – being creative. For him, there’s pleasure as well as purpose in braving the viscera of art and saturating his paintings in the hottest colors he can find, not just on canvas but on public and gallery walls as well as on cars carrying his message on the freeways of his native Los Angeles. Recently, he made four hundred tondos of his signature, goofball character, no two alike. And they keep on coming, spinning out like the blades of circular saws that have escaped their fittings – the emanation of an imagination gone rogue. Let the damn virus try to cut us off at the knees. These Square Heads, Vector Heads, and Dot Heads will not be restrained.

Scharf has been sounding these alarms for decades. With imagery he derived from popular cultures both beastly and benign, he made effervescent paintings that drew attention to the willful destruction of natural resources by commercial interests, yet were utterly engaging and even entertaining or, one might say, devilish. Nevertheless, it’s striking how closely the grinning, bulb-nosed tricksters in these 15 new works, several painted just before the coronavirus reached the United States, suggest a nimble virus multiplying, mutating and seeding a deceptively sweet universe radiating from a still fiery sun. At the same time, their rolling, crisscrossing trajectories evoke organisms that are all dressed up with no one to invade but themselves, thanks to the resilience of the human spirit. Which is art. Scharf can contain the pandemonium he paints within the edges of his canvas, if not in life, but the act at least raises the possibility that it can be done. Which feels right.

The actual coronavirus has so far caused well over a million infections worldwide and has taken many thousands of lives in New York City, historically the place that has generated every transformative shift in American culture, and where Scharf cut his teeth as an artist. Probably, the latest crisis will lead to similar change, because that’s what artists do.

Disarming but not innocent, Scharf’s paintings are cautionary tales of the good-natured mayhem he’s been causing since his student days in New York, in the late 1970’s. A stealth bomber with a sack of spray paints, he’d bicycle through the night to revive crumbling East Village walls and discarded appliances with his brilliant cartoons. He worked with a speed necessitated by police who treated street artists as vandals, rather than as highly moral citizens who pushed back against officials to humanize the city they’d left for dead and make it a nicer, even a dazzling, place to live.

Scharf’s touchstones in those days were the Flintstones and the Jetsons, the cutesy animated sitcoms of past and future that he grew up watching on television and then emulating in paintings and live performances that put the two poles on a collision course that culminated in his artistic Big Bang, or Time Splat!, as he calls it, though he named it Pop Surrealism at the time, riffing on the precedent set by the unruly Chicago Imagists. The idea was not just to have a good time but to make time good. Then, as now, spontaneity remains the soul of his art. Where other artists of his generation cast a critical eye on the media, Scharf internalized it, and came up with a masked ball of humanity, a carnival of cackling, lascivious biomorphs rollicking around the fantasia of his these sprayed, brushed, dripped and spackled paintings with infectious abandon, leaving them only long enough to open our eyes.