Halsey McKay Gallery hosts Kendra Jayne Patrick in the upstairs gallery, with an exhibition by Texas-native conceptual artist David-Jeremiah. PLAY showcases paintings belonging to a body of work called Hamborghini Rally: Soul Hunt City in which the artist uses the framework of his favorite sim racing video games to investigate the anatomy of revenge. 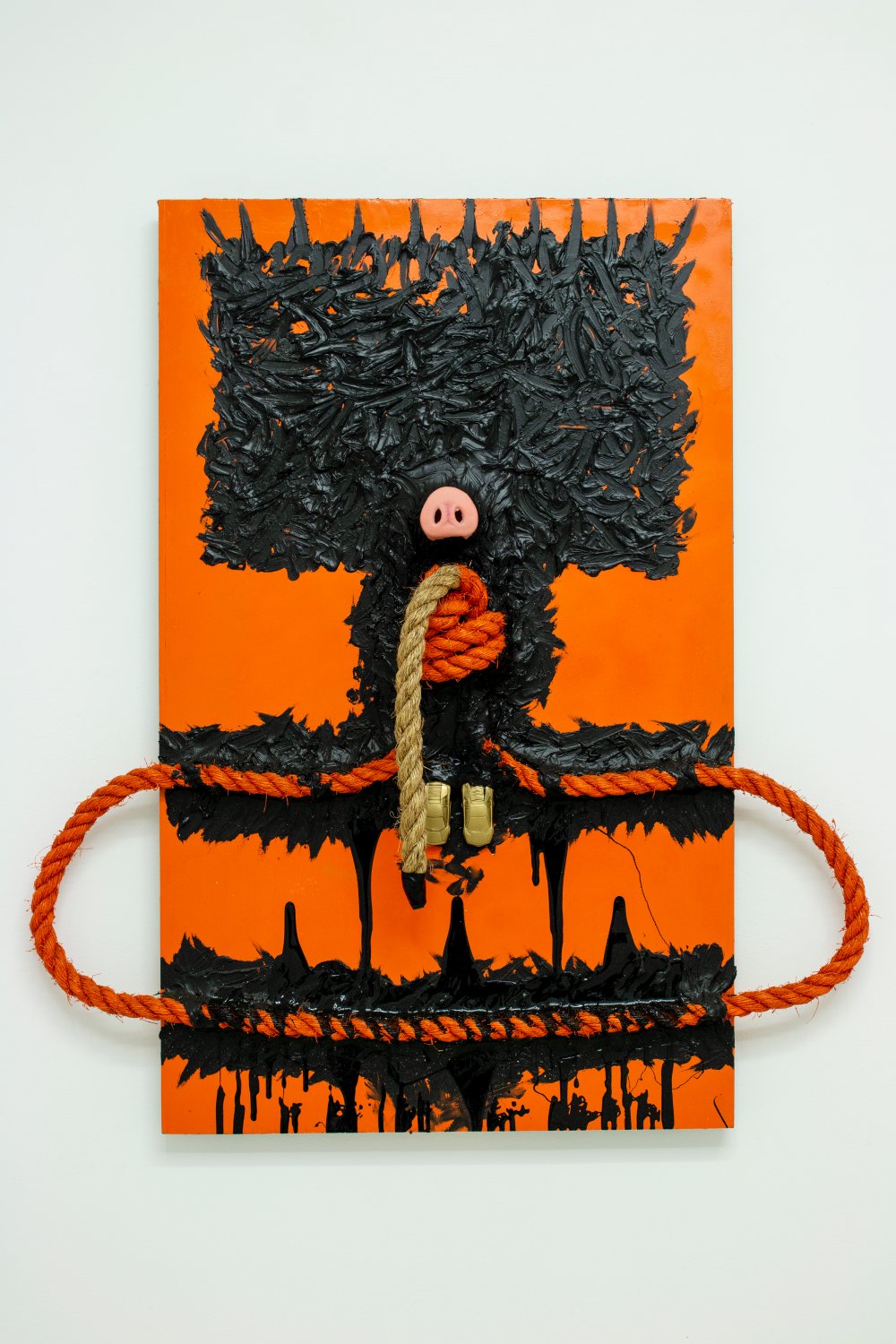 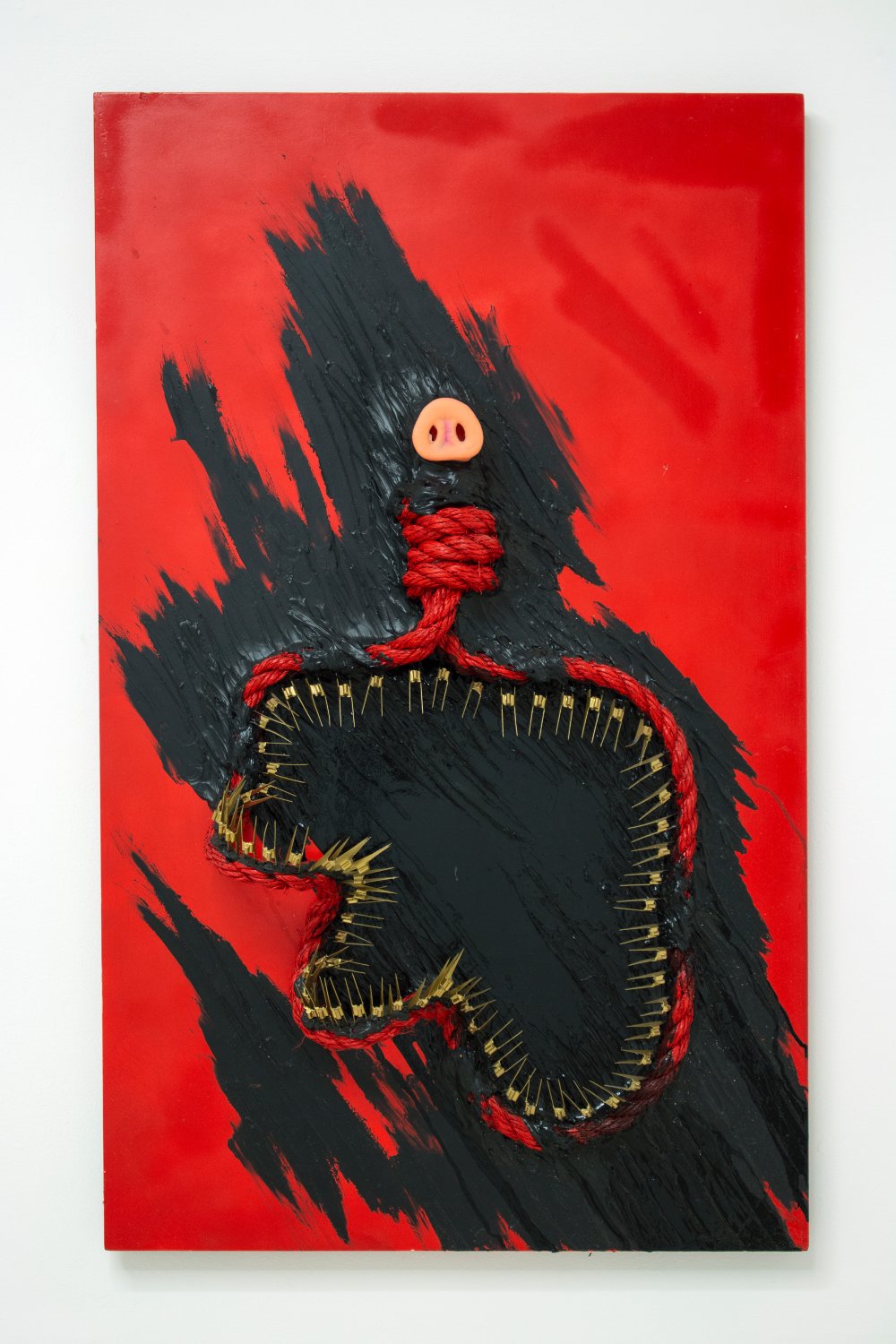 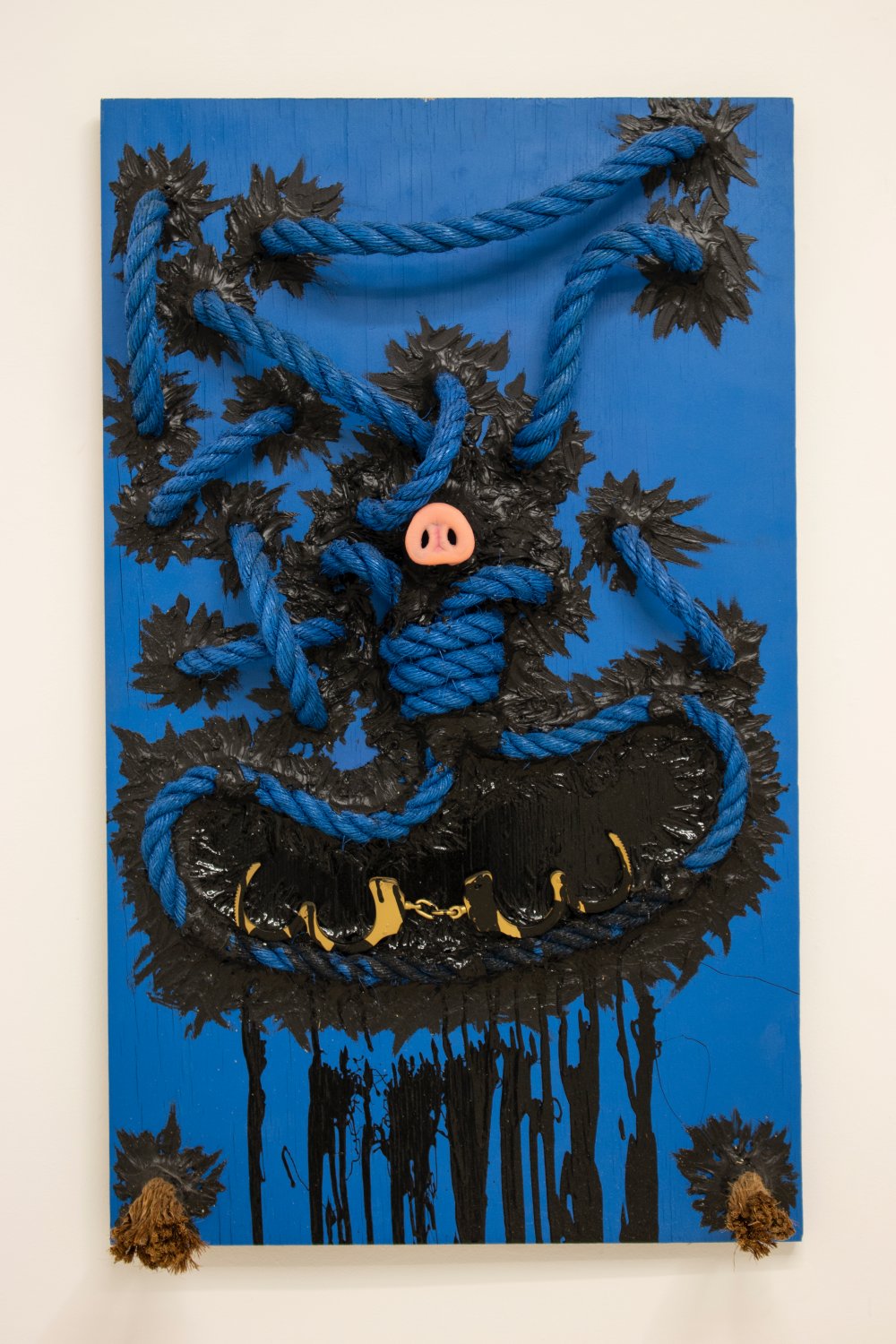 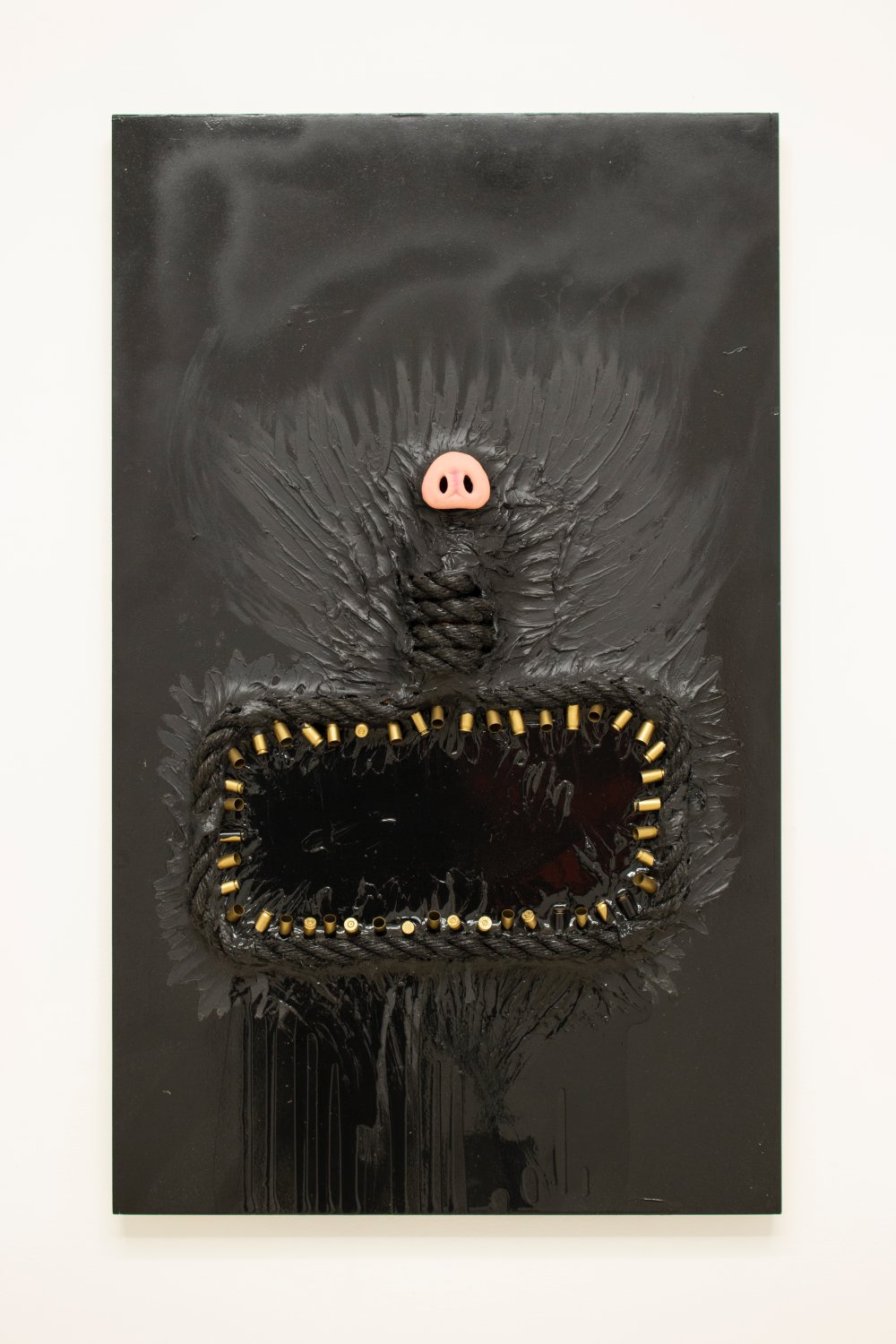 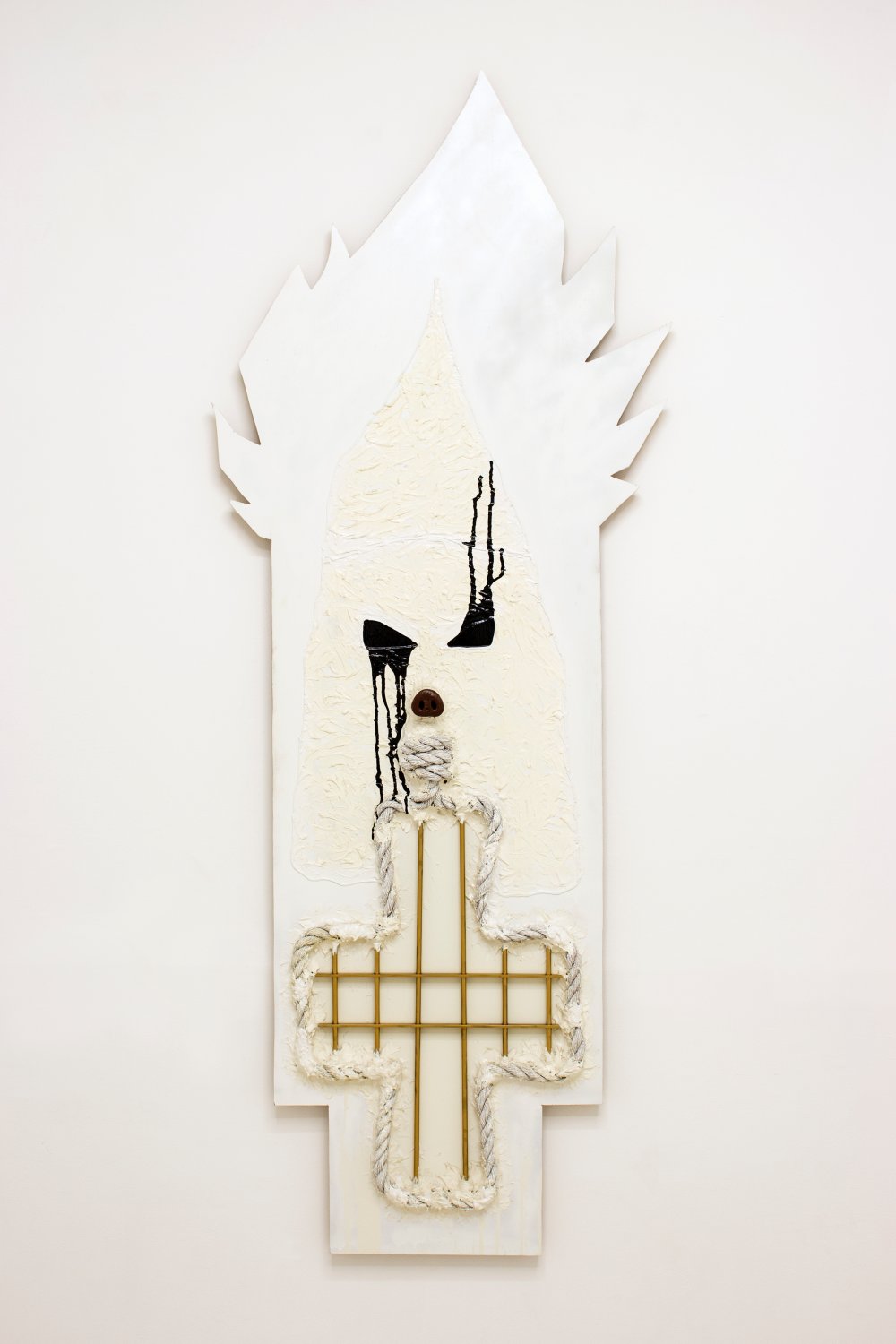 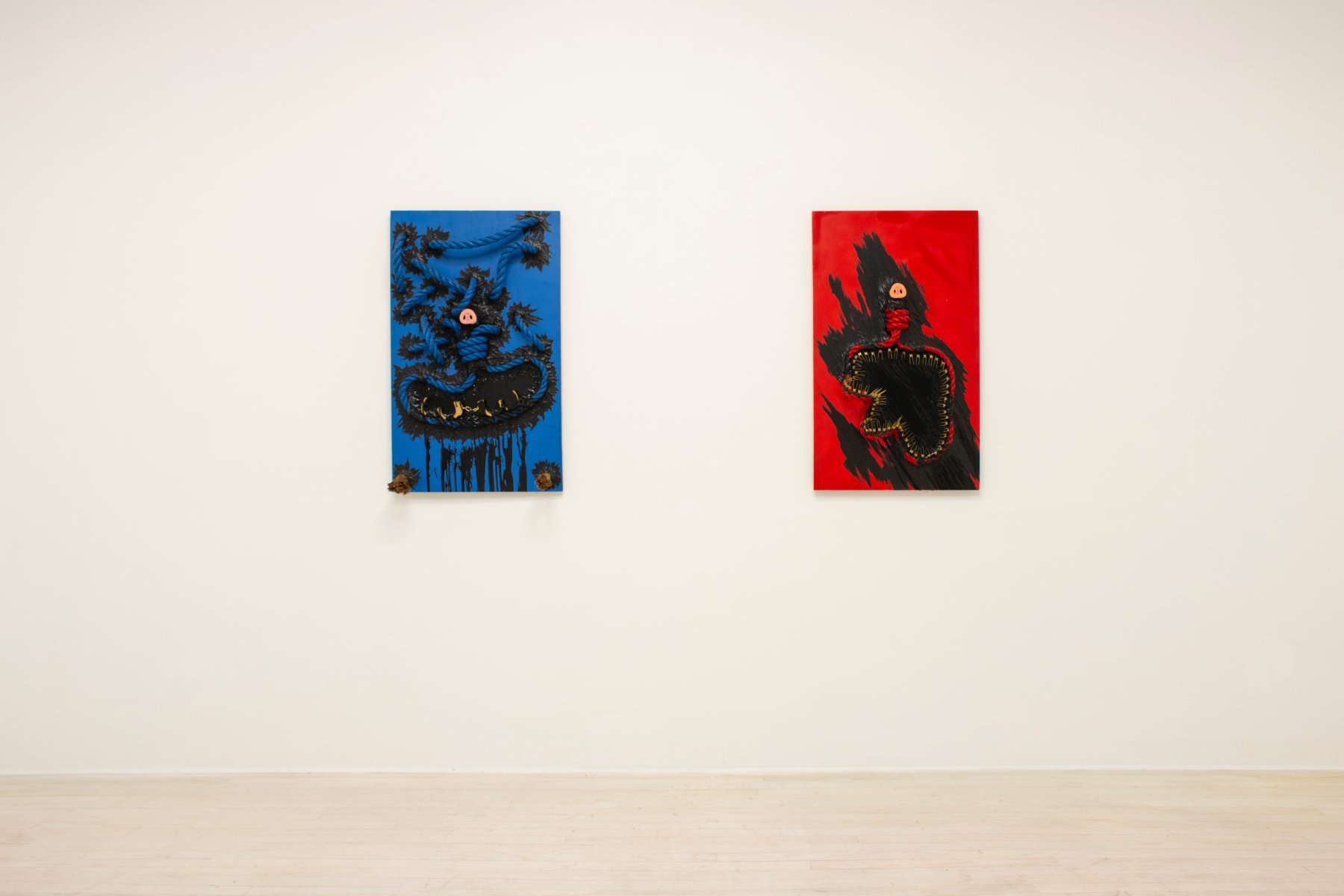 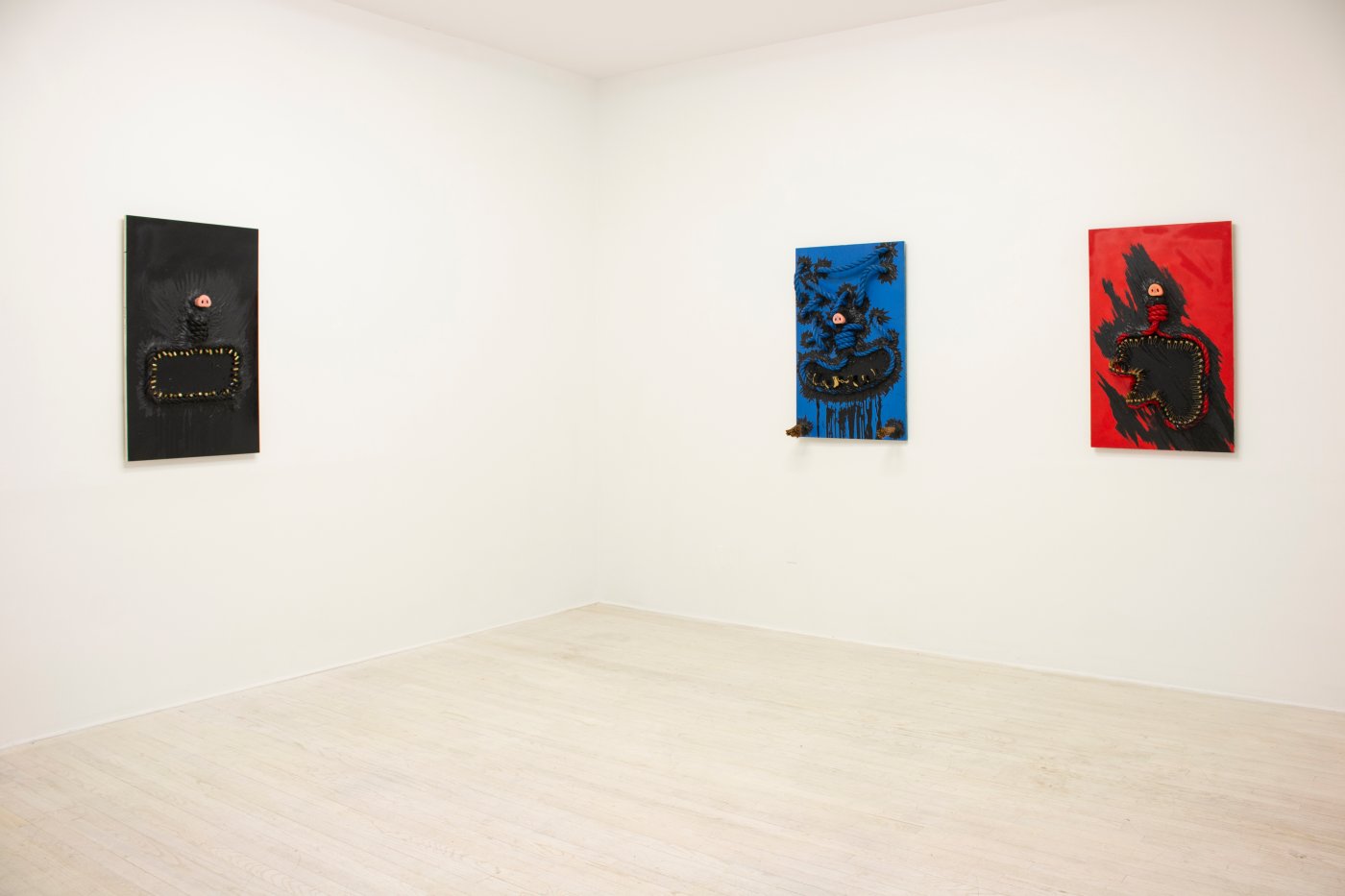 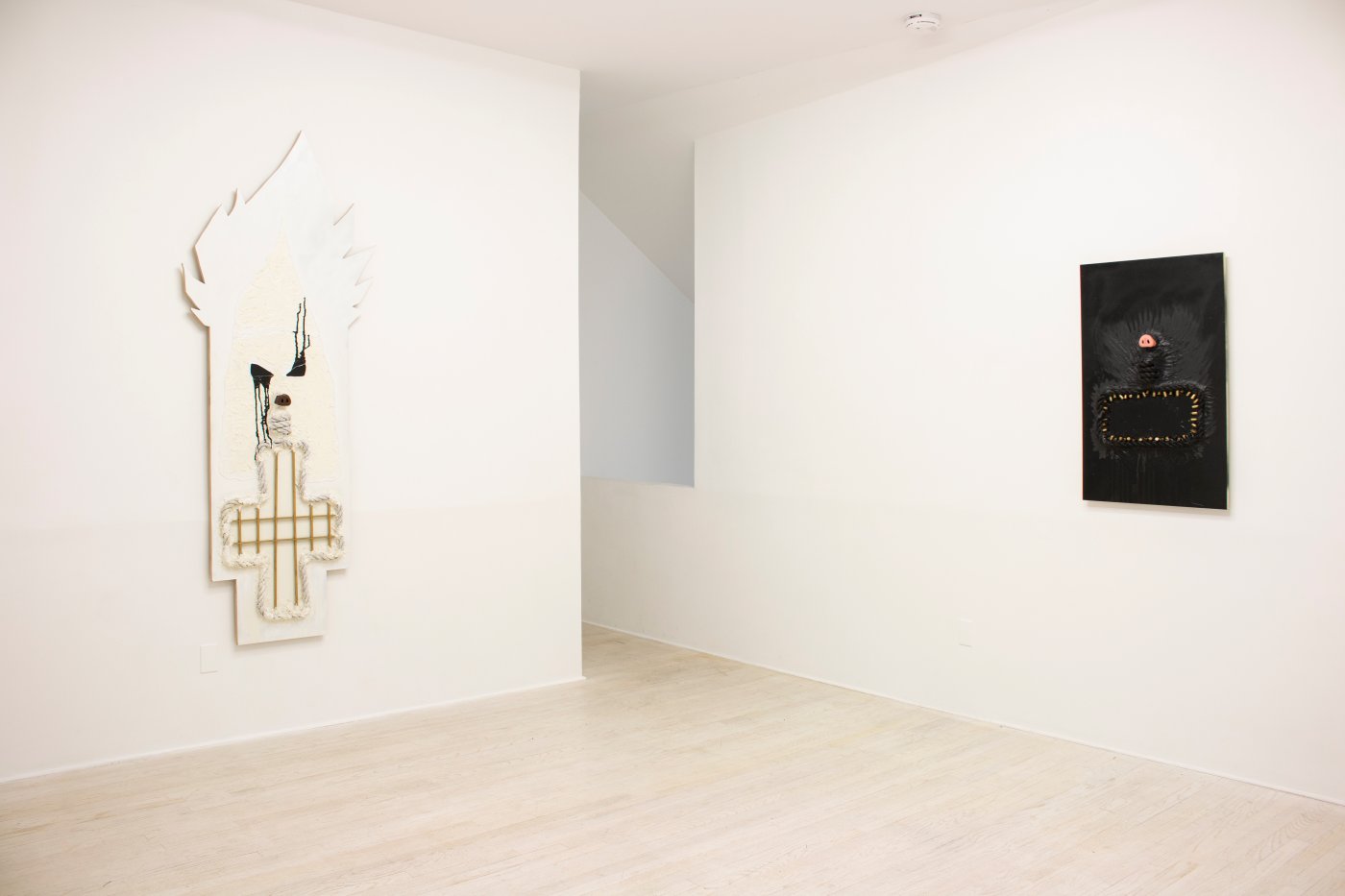 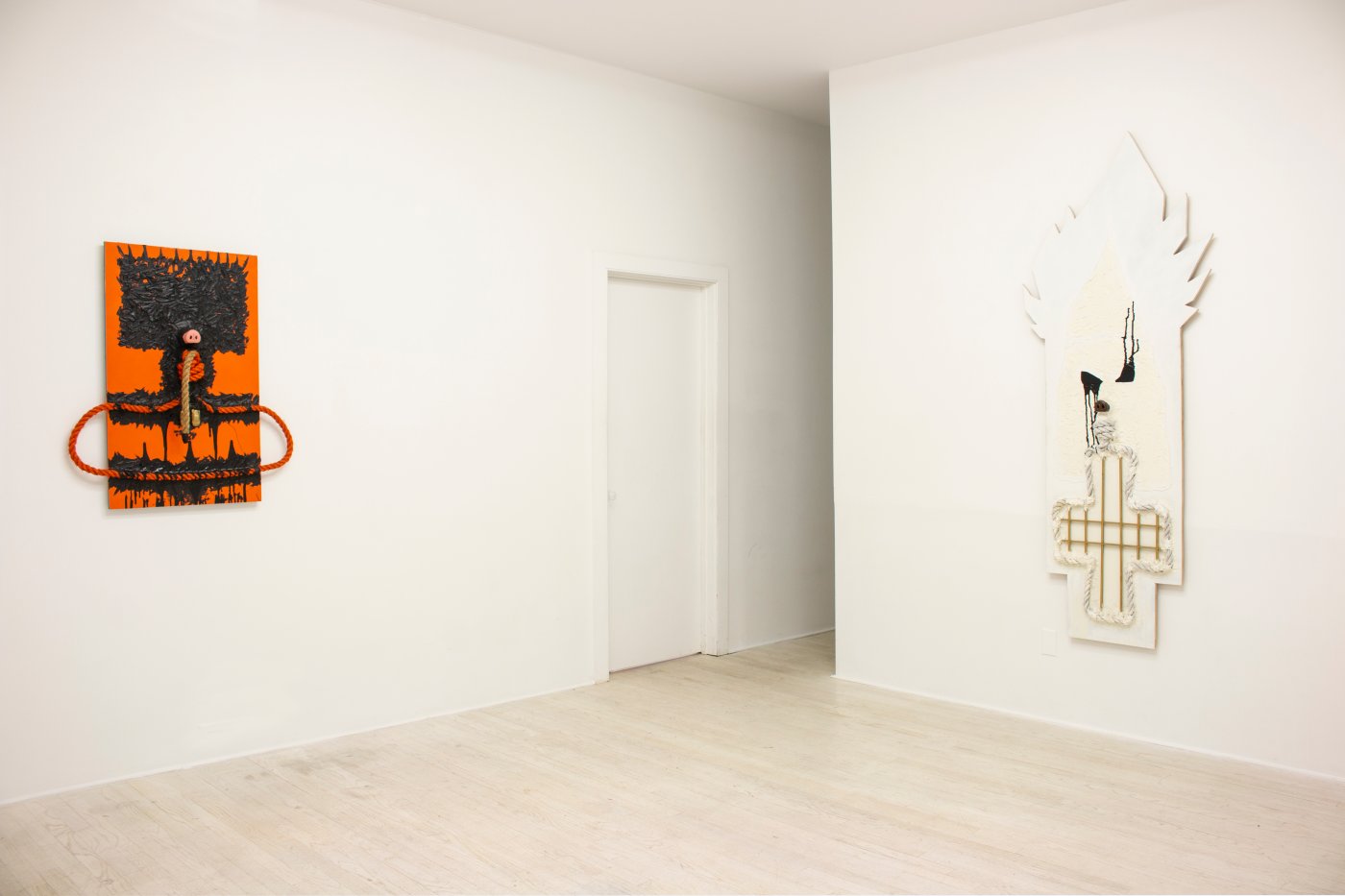 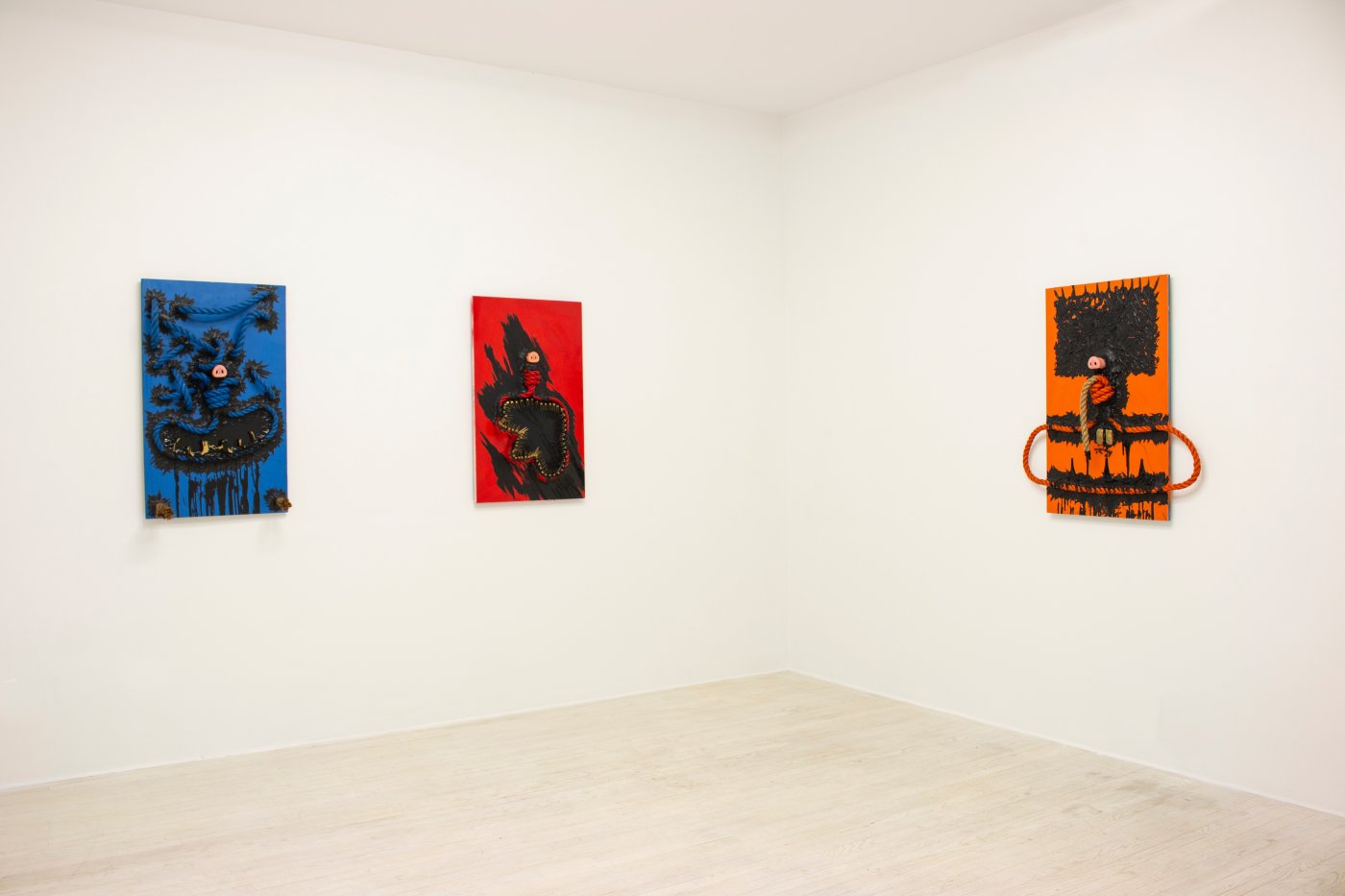 The origin story anchoring the universe that is Soul Hunt City is a revenge killing that American news outlets called “The Deadliest Incident for Law Enforcement Since 9/11.” In July 2016, former Army carpenter Micah Xavier Johnson shot twelve and killed five Dallas police officers in response to the country’s unwillingness to prosecute police who murder black civilians. Although Johnson escaped the initial scene, he was later found barricaded in a building on a nearby college campus where police killed him by sending a bomb-diffusing robot with a remote control bomb to explode his hiding place. This was the first time in US history that law enforcement used a bomb-diffusing robot to kill someone. The Hamborghini Rally begins, then, when Johnson’s (white; ‘91 Andrós) vengeance wills officers Zamarripa (red; ‘83 Bikees), Ahrens (orange; ‘68 Semipro), Krol (yellow; ‘76 Correcto; (not yet with us at Soul Hunt City), Smith (black; ‘60 Rangeri), and Thompson (blue; ‘72 Dartón) into racing one another to get their souls back from his possession.

The Lamborghini motif showing up in multiple bodies of Jeremiah’s work and here frames each character’s origin story. It is another intricate utilization of the names and colors of those models that the Italian automakers named after fighting bulls known to have either killed matadors in the ring or won enough coursings to earn their freedom. The paintings embody the accord of will, guts, and fear that Johnson’s brutal retaliation shares with the terror that the police f/k/a slave catcher a/k/a overseer class visits upon black people. Jeremiah estimates that the longer the officers spend in the potent exchange that is competing for Johnson’s approval, the more they’d bear many different kinds of resemblances to him. And Johnson, who spends his time in this universe mercilessly, indefinitely holding the officers hostage has himself been morphed by the residue of colonialist thinking. After all, what do we make of the fact that symbiosis is among revenge’s most important externalities?

David-Jeremiah, b. 1985, Dallas, TX, is a multidisciplinary artist who lives and works in Oak Cliff, TX. Recent solo exhibitions have been with Jeanette Kennedy Gallery; The Public Trust and PLANT/NON- Dallas, TX. David-Jeremiah is a 2020 recipient of the Nasher Sculpture Center Artist Grant Award. PLAY is his first exhibition with Kendra Jayne Patrick and Halsey McKay Gallery. Von Ammon Co. in Washington DC will host a solo exhibition in March.

Kendra Jayne Patrick is an itinerant, eponymous art gallery based in New York City. The program is focused on exhibition-making and symbology related to the twenty first century avant-garde, specializing in post-conceptual and post-internet sculpture, digital, photography, and painting. Since opening in late 2017 the gallery has shown a range of international artists and practices including IvanArgote, Lap-See Lam, Kenya (Robinson), !Mediengruppe Bitnik, Jo Shane, and Qualeasha Wood. Gallery Kendra Jayne Patrick has been featured in Artsy, Vulture, ARTnews,Barron’s, the San Francisco Chronicle, and DAZED Magazine.

Courtesy of the artist and Kendra Jayne Patrick