Katherine Bernhardt: Why is a mushroom growing in my shower?

Katherine Bernhardt: Why is a mushroom growing in my shower?

David Zwirner presents its first exhibition with American painter Katherine Bernhardt since announcing representation of the artist in 2021. Taking place at the gallery’s London location, Why is a mushroom growing in my shower? features new large-scale paintings that include motifs from Bernhardt’s unique visual lexicon, which culls from an irreverent American pop vernacular as well as her own life and the broader culture. 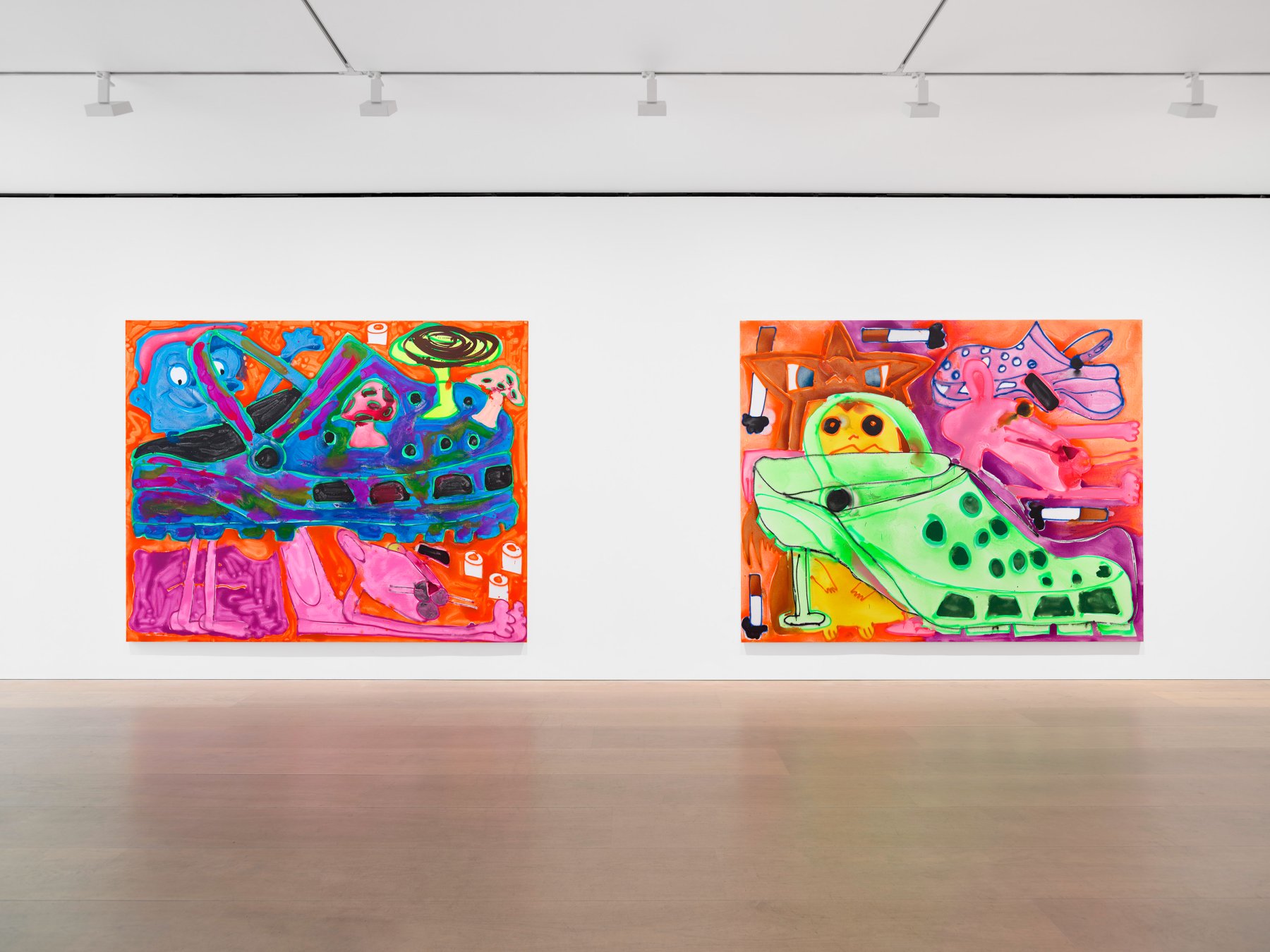 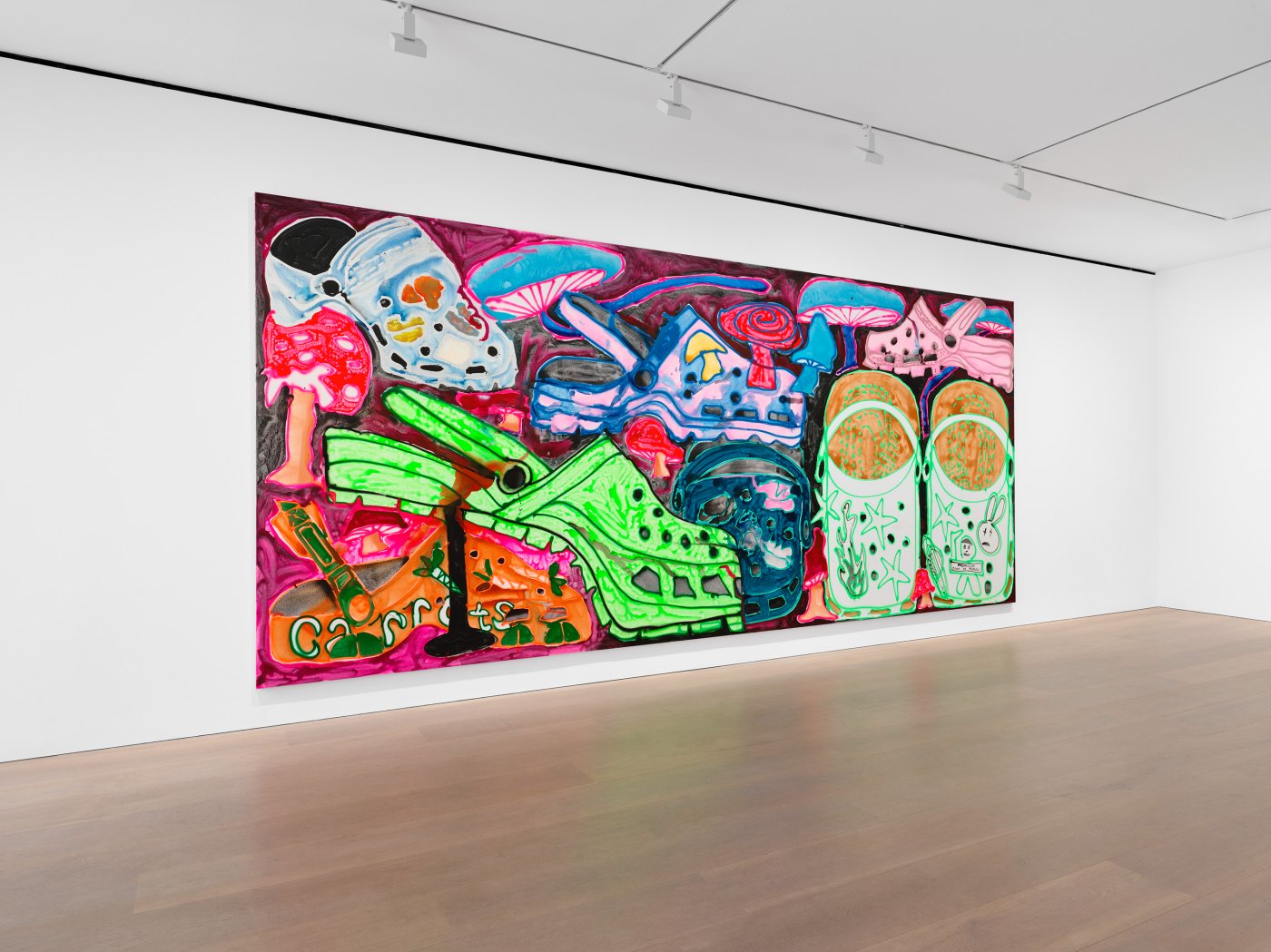 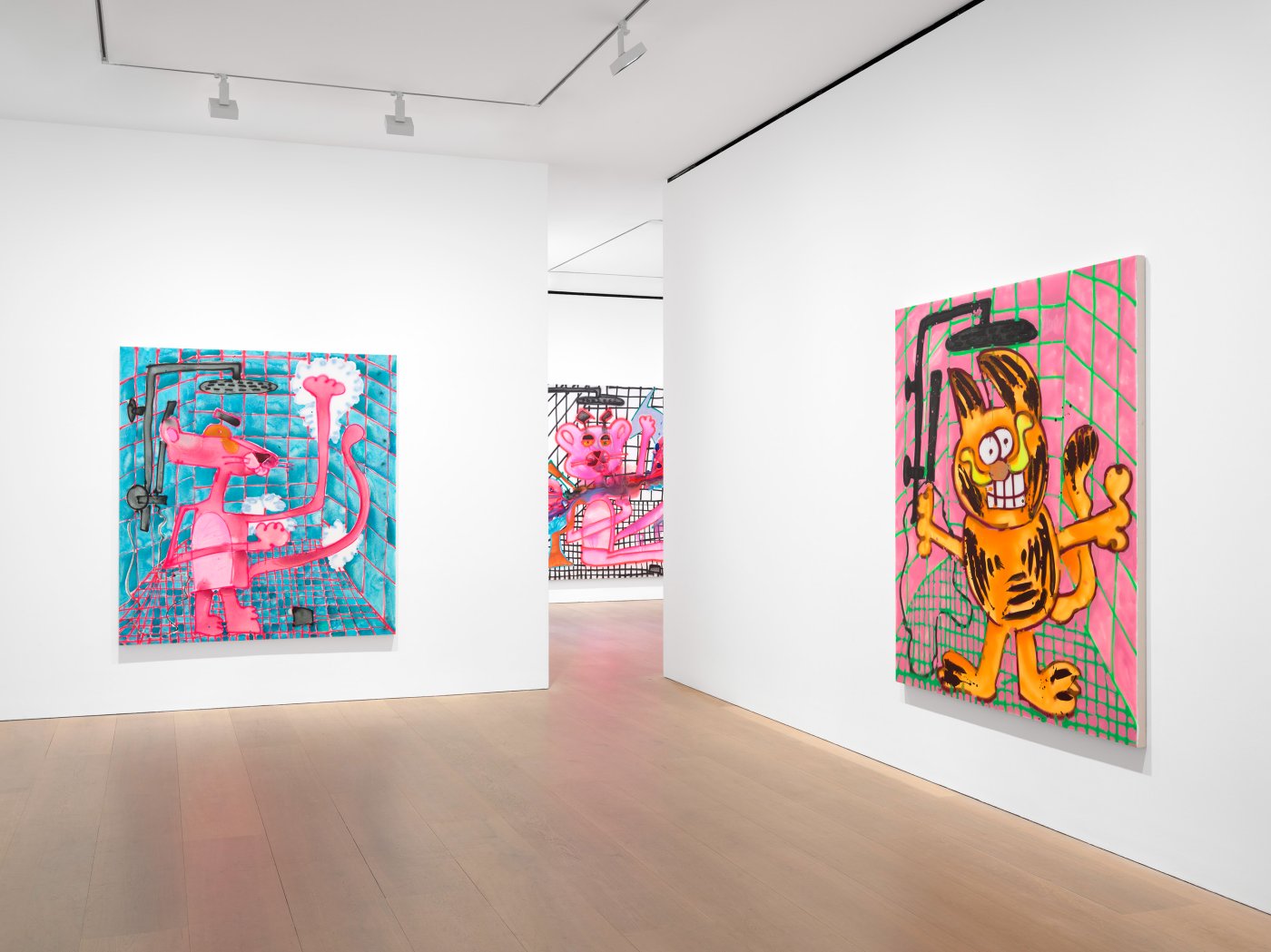 Bernhardt’s boundless visual appetite has established her as one of the most energetic painters working today. She first attracted notice in the early 2000s for her paintings of supermodels taken from the pages of fashion magazines such as Elle and Vogue. In the decade following, she began making pattern paintings that feature quotidian motifs—such as tacos, coffee makers, toilet paper, cigarettes, E.T., Garfield, Darth Vader, and the Pink Panther—in unlikely visual combinations within expansive fields of exuberant colour. The compositional elements of Bernhardt’s paintings include palettes that allude to the tropical climes of Puerto Rico, references to the design and colouration of Moroccan rugs and West African Dutch wax fabrics, and influences ranging from Henri Matisse and the Pattern and Decoration movement to Peter Doig and Chris Ofili.

Why is a mushroom growing in my shower? presents new paintings that feature Bernhardt’s familiar obsessions as well as fresh subjects including Ditto from Pokémon, Crocs footwear, magic mushrooms, and bathroom showers—which she conceives as a setting for these outlandish forms as well as a space to brainstorm ideas. In her imagery, Bernhardt playfully joins the absurd and the relevant, touching on such trends as the return of mycological fixations in popular culture or the increasing appetite for fashionable, comfortable shoes during the COVID-19 pandemic. The works also recall art-historical precedents that speak to a particular mode of postwar domestic life, suggesting the shower paintings of David Hockney, the tiled bathrooms portrayed in William Eggleston’s saturated colour photographs, and Superstudio’s furniture overlaid with orthogonal grids from the 1970s.

Titles of exhibited works like Crocs Sampler Sharks Iguana (2021) and Green Balenciaga Croc Poncho Pikachu Panther Cigarettes (2021) straightforwardly list the objects and figures depicted; however, no strict visual hierarchies are established in these compositions, as the artist privileges boisterous free association. In Panther Ditto Bart Iguana E.T. (2021), the cartoon character Bart Simpson shares space with the square pink Ditto, while in Mycophilo Shower (2022) the Pink Panther is wedged between two polka-dotted mushrooms, one of which bisects a toothy gray shark. Paintings like Mycology (2022) or the humorously named Cigarettes Taking a Shower (2022) show improbable scenarios in various tiled bathroom interiors. Here, colours and lines bleed and pool together, revealing Bernhardt’s brisk and improvisational process. To create her works, the artist first draws on upright canvases with spray paint, after which she lays them on the floor to apply acrylic paint thinned out with water. Moving back and forth between several paintings at once, Bernhardt invites accident and chance into each of her dynamic compositions through her fast-paced actions.

Drawn to the bold and cheerful limited-edition collaborations spearheaded by Crocs, Bernhardt pays homage to the shoe company in a monumentally scaled painting on view on the gallery’s first floor. Crocs World (2022) features the green heeled Balenciaga Crocs, the Crocs x Carrots collaboration, Bad Bunny’s glow-in-the-dark Crocs affixed with a charm that reads ‘Precaución: Zona de perreo’, and the Crocs sprouting illicit fungi that were designed by music producer Diplo—also the subject of the smaller Diplo Croc World (2021). Psilocybin mushrooms proliferate across the surface of this composition, as Bernhardt ignores logical scale shifts and perspective; the fungi also appear in such compositions as Forest Bathing (2022)—where they surround the wrinkly body of E.T.—and Panther Crocs Iguanas (2021), which shows the titular pink cat in an acrobatic pose with two slinky green reptiles and a pair of the modish waterproof foam clogs. In Clean Garfield (2022), the striped cat dons a Cheshire grin and takes a shower in a pink-tiled stall lined with green grout, which also sets the stage for Showering Ditto (2022). These recurring motifs and characters are amplified by Bernhardt’s signature palette of lively, electrifying colours as well as chromatic combinations from bathrooms she herself has designed.

This will be Bernhardt’s first solo presentation in London since 2015. To coincide with the exhibition, the gallery will launch an online viewing room on davidzwirner.com with related works on paper featuring the tiled bathroom interiors. An accompanying publication is forthcoming from David Zwirner Books.

In 2018, the solo exhibition Katherine Bernhardt: Watermelon World was on view at the Mario Testino Museum (MATE) in Lima, Peru. The previous year, in 2017, the Modern Art Museum of Fort Worth, Texas, presented FOCUS: Katherine Bernhardt. Also in 2017, the artist painted a sixty-foot-long mural entitled XXL Superflat Pancake for the St. Louis Contemporary Art Museum. Bernhardt has created a permanent installation for Club Caribe, Cidra, Puerto Rico, and a pool painting at the Nautilus South Beach, Miami Beach (both 2015).

Her work has also been included in significant group exhibitions, such as We Fight to Build a Free World: An Exhibition by Jonathan Horowitz, Jewish Museum, New York (2020); Animal Farm, an exhibition curated by Sadie Laska at the Brant Foundation Art Study Center, Greenwich, Connecticut (2017); NO MAN’S LAND: Women Artists from the Rubell Family Collection, Rubell Museum, Miami, which travelled to the National Museum of Women in the Arts, Washington, DC (2015–2017); and Bad Touch, Ukrainian Institute of Modern Art, Chicago (2002).