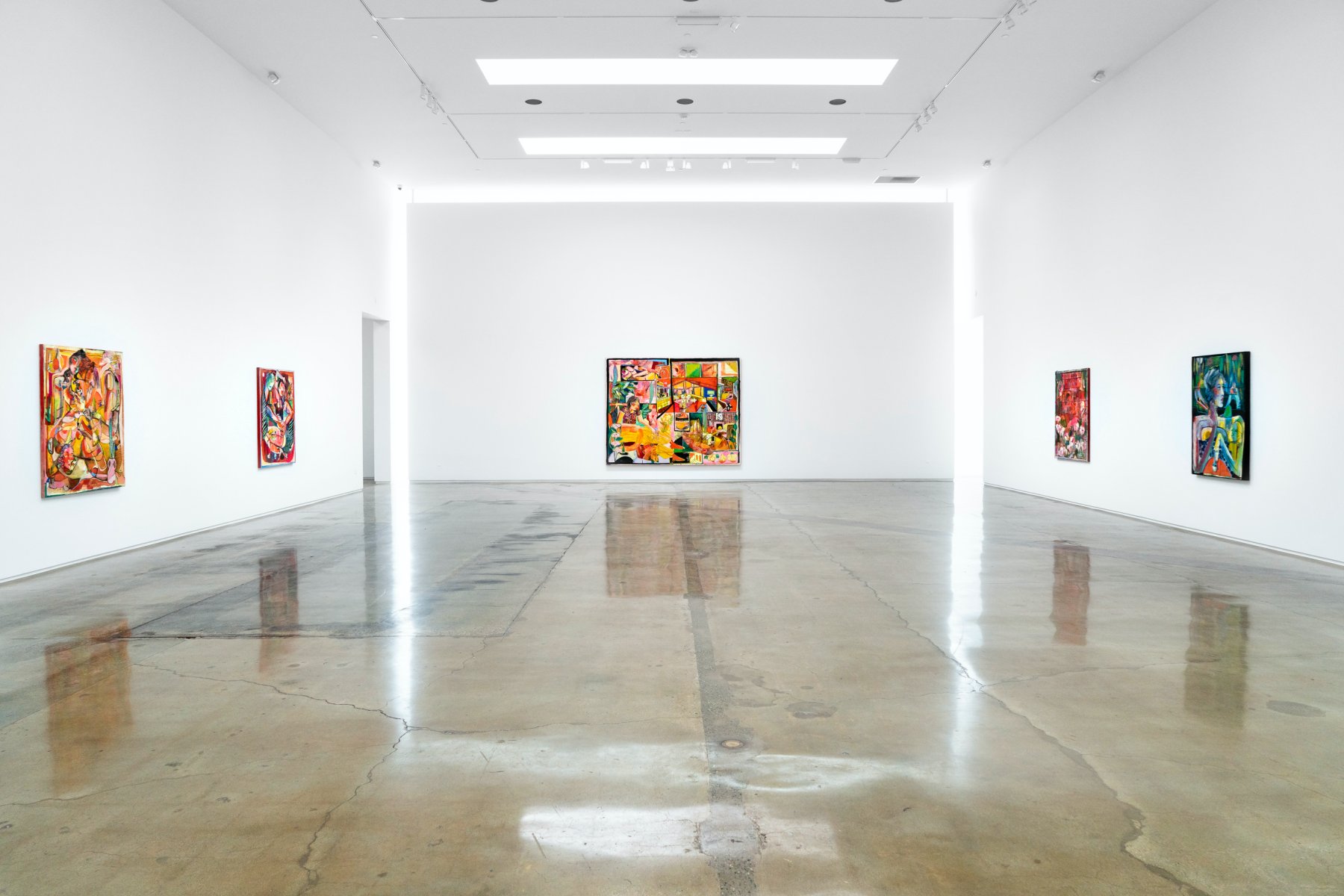 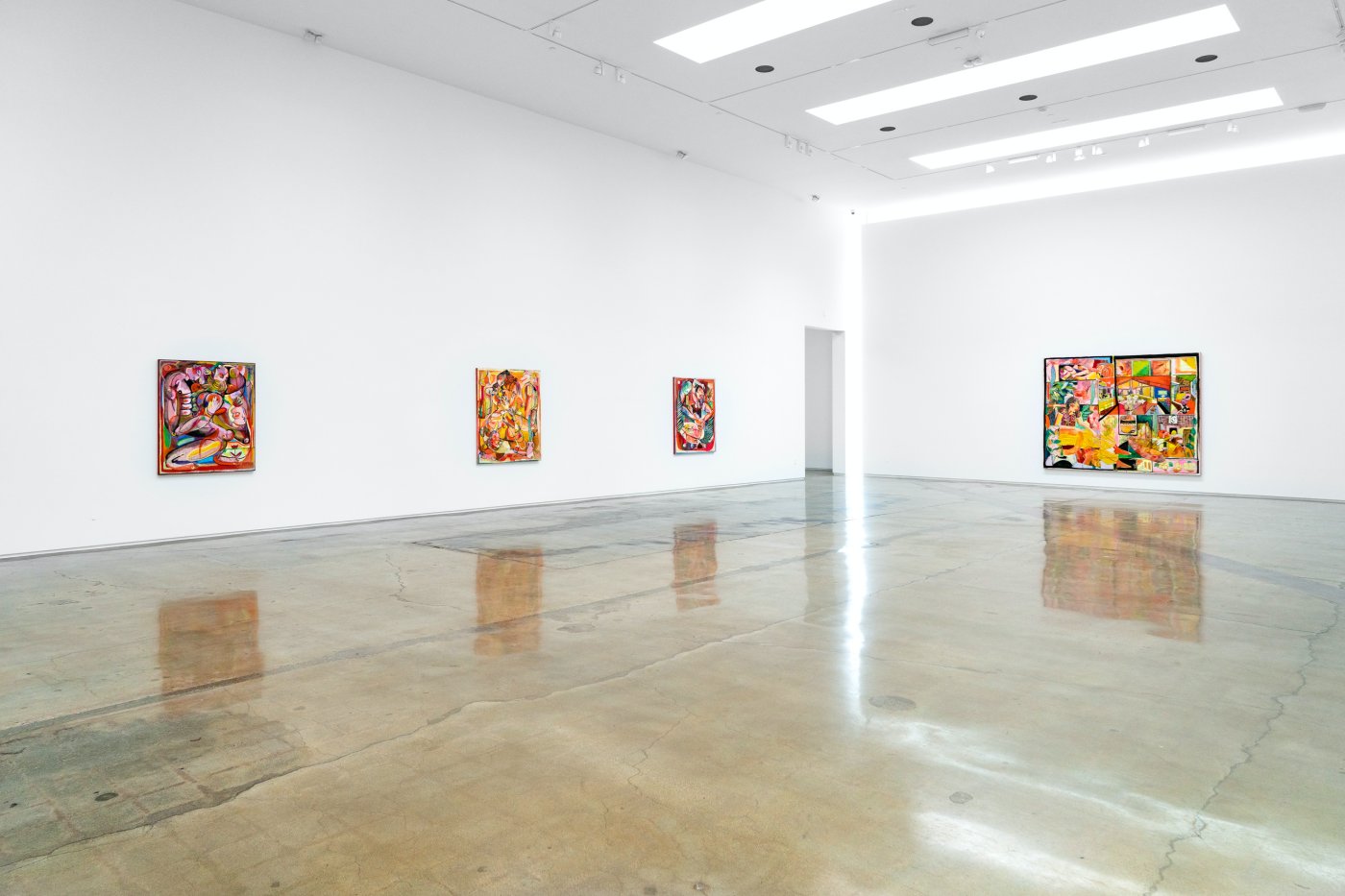 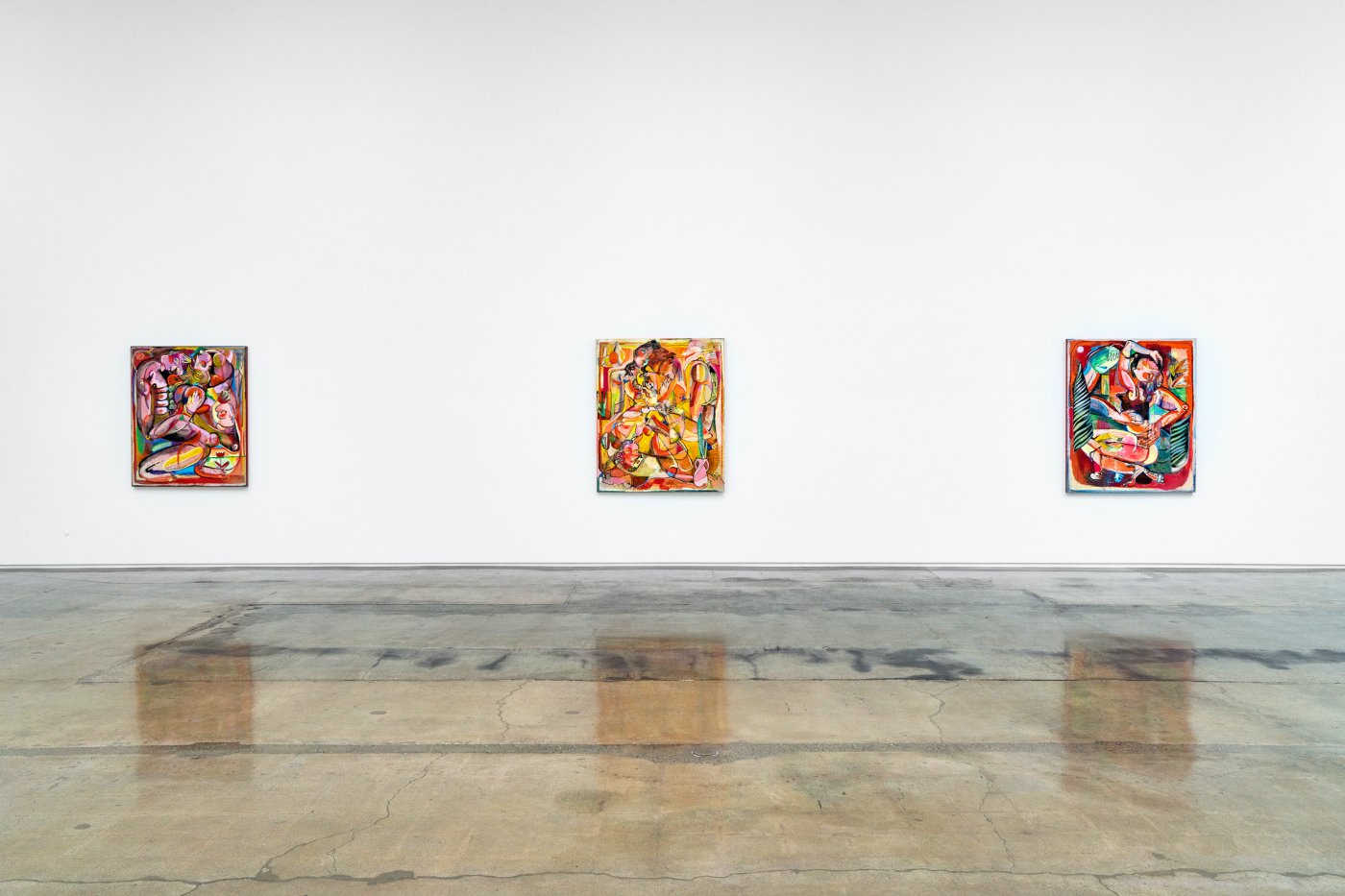 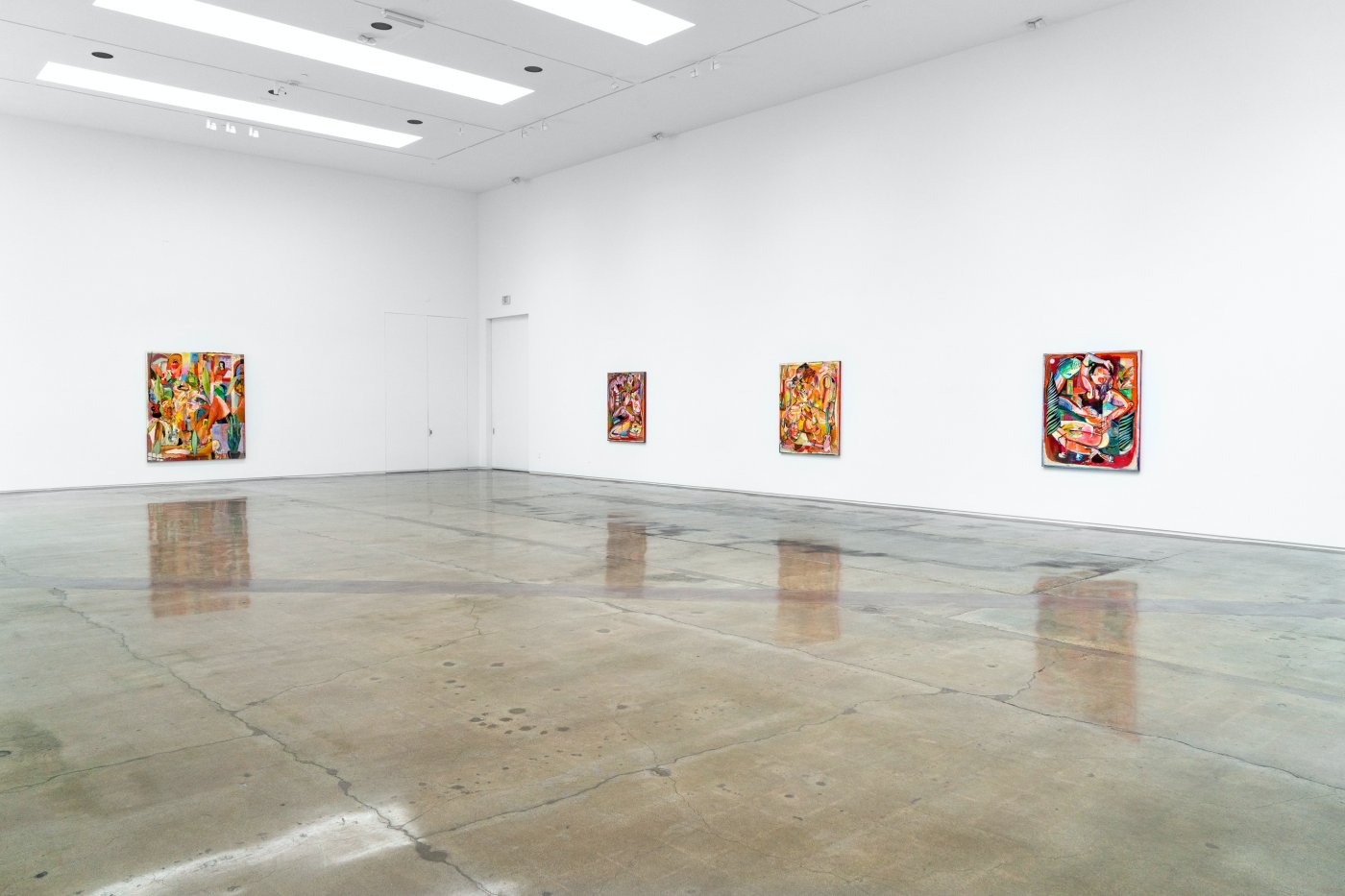 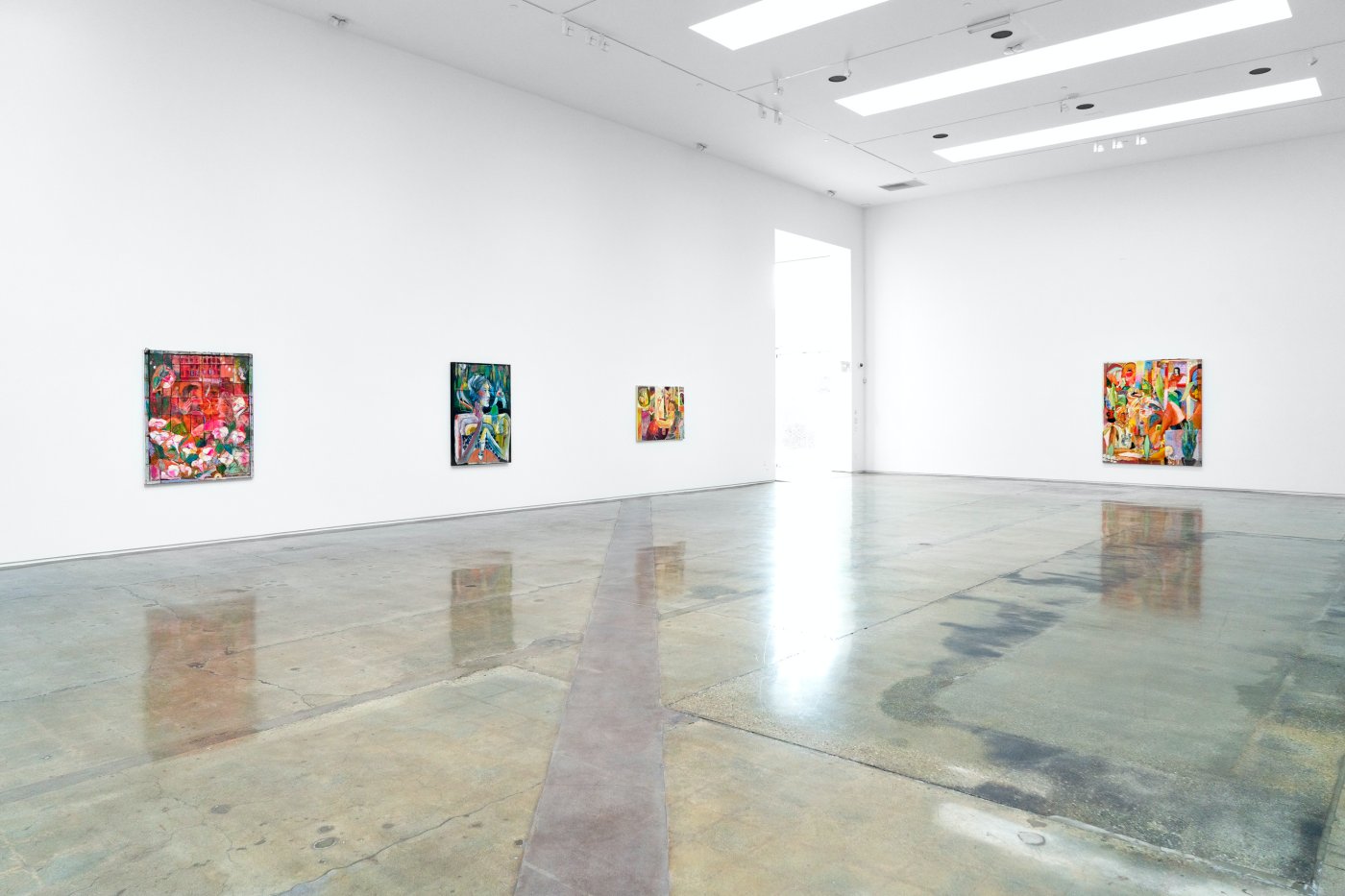 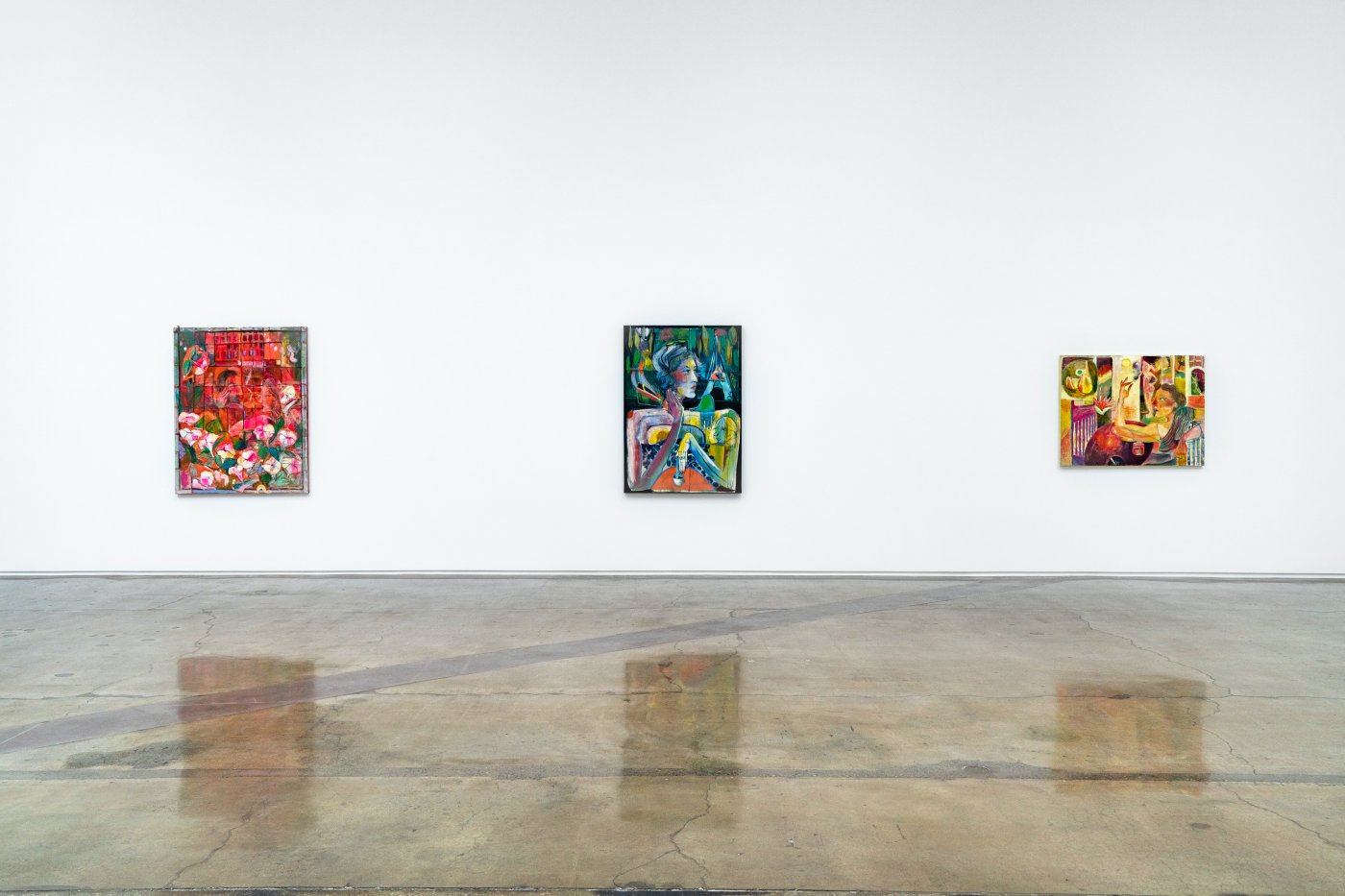 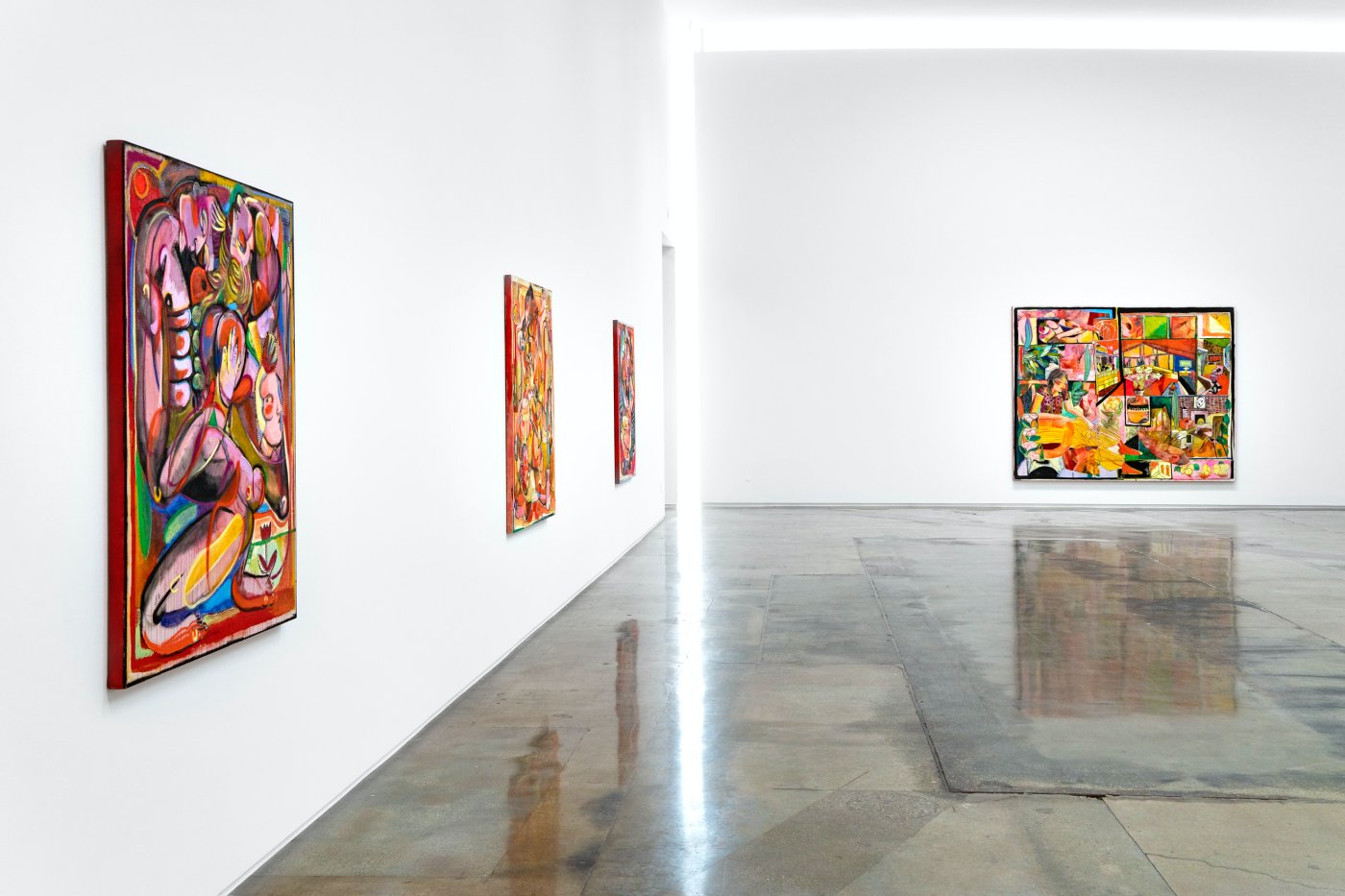 Born and raised in Dallas, Texas, Barbee makes forcefully expressive large-scale paintings, whose abundance of colors, gestures, abstract forms, and layers of mixed media converge in dream-like images of figures—mostly women—in domestic tableaux. At once intimately personal and yet evocative of universal experiences of emotion and connection, Barbee’s works are relational, environmental portraits that favor sensation over precision. She captures the moods, vulnerabilities, desires, and power struggles of her subjects, working with an open-ended, responsive process that calls to mind German Expressionist and Neo-Expressionist forebears, shot through with a decidedly contemporary approach to form, process, and material.

With the new works in Feral Flora, Barbee celebrates painting’s capacity to contain wildly different modes of representation and mark-making in harmony on a single canvas. Her soaring compositions are dense with detail, dynamic tumbles of limbs, domestic architecture, and objects like houseplants, ceramics, and pieces of art; the faces that prevail above the fray, in contrast, are elegantly still and stoic. These works function as portraiture in a similar manner to how early Cubist assemblages functioned as still lifes: the real-life references are discernible, but the artist uses them as a structure upon which to layer abstract forms, perspectives, applications of paint and material. Barbee’s work is intensely frontal; its blurred distinctions between figure and ground offer the compelling suggestion that the subjects—many of whom are the artist’s friends and acquaintances—are better understood in relation to the space they occupy. These figures call to mind the romantic scenes of Marc Chagall, and like Chagall’s atmospheric narratives, Barbee’s are laden with enigmatic symbolism. Her subjects often occupy the canvas to the edges much like how waves of emotion may completely saturate an individual. We cannot fully grasp these women, but we are given a surplus of visual and emotional cues to try and understand them.

Barbee’s process swings between pure intuition and intentionality as she refers to her extensive archive of collected images and personal snapshots. To create works like the human-scaled Blue Moon and Skinny Dip (both 2020), for instance, Barbee begins by stretching her canvases on the studio floor, where the dirt they pick up offers suggestions of images not yet apparent. She sketches in loose lines, responsively adds color and thicker paint to flesh out the bodies, and gradually brings the figures and their ambiguous sexual entanglements into focus. Working with such physicality in large-scale, Barbee moves her entire body through each application of paint. The dimensionality of the work comes from Barbee’s material interventions on the surface of her canvases, like thickly applied waxes and embroidery strings and scraps of quilts, canvases, and other textiles. These various elements direct the viewer’s eye in unexpected routes around each painting, reinforced by paint applications of greens and blues that vibrate against the warm palette of oranges, reds, and yellows. The textile fragments she sews onto the canvas as a final step are often scraps from discarded and unfinished paintings. This suggestively feminist gesture speaks to the importance of craft and care in Barbee’s process; it honors the risk and vulnerability of her approach, placing her “failures” at the center rather than neutralizing them.

Other works are more measured and directly referential, as in a suite of portraits of women smoking cigarettes or sipping tea in cafés, like Brush Fire and Brett (both 2020)—scenes suffused with moody alienation, in contrast with the sexual entanglements of her multi-figure scenes. Barbee considers these paintings an ode to the glamorous subjects of Helmut Newton’s fashion photography, and with their subject matter, palette, and angular, expressionistic rendering they also recall the Berlin scenes painted by Ernst Ludwig Kirchner in the early 20th Century. Keenly attuned to her relationship with the history of painting, Barbee makes no secret of the inspiration she draws from diverse sources, like the lush maximalism of Cecily Brown and the foreboding, dusty LA imagery of RB Kitaj. Processed through her muscular, idiosyncratic approach, Barbee’s work sets these histories in dialogue with a lineage of painters who’ve expanded the material possibilities of their medium, from the sutured canvases of Joan Snyder, to the wax experimentations of Eva Hesse, to the layered and scraped palimpsests of Mark Bradford.

Made almost entirely during the pandemic of 2020, the works in Feral Flora offer distilled snapshots of millennial urban life, capturing the emotional complexities of this paradoxical moment of estrangement and interconnection. Threading escapism and confrontation, strength and vulnerability, familiarity and mystery, Barbee’s practice stands as a testament to the enduring relevance of painting in order to make sense of the world we navigate—a call to see people, spaces, and our relationships with both in a new light, color, or form.

Barbee received her BFA from the University of Texas at Austin. She has exhibited nationally and internationally, including Papercuts at Saatchi Gallery, London in 2018; Sweet Primal Things at James Wright Gallery, Los Angeles, CA in 2019; and myselves at Kohn Gallery in Los Angeles, CA in 2020. Barbee’s work has been reviewed in numerous publications, including Harper’s Bazaar and VoyageLA.