Pilar Corrias presents an exhibition of new work by Kat Lyons at the Savile Row gallery. This is the artist’s first solo exhibition in the UK, showing thirteen paintings based on Lyons’ experiences living on a small, diversified livestock farm. 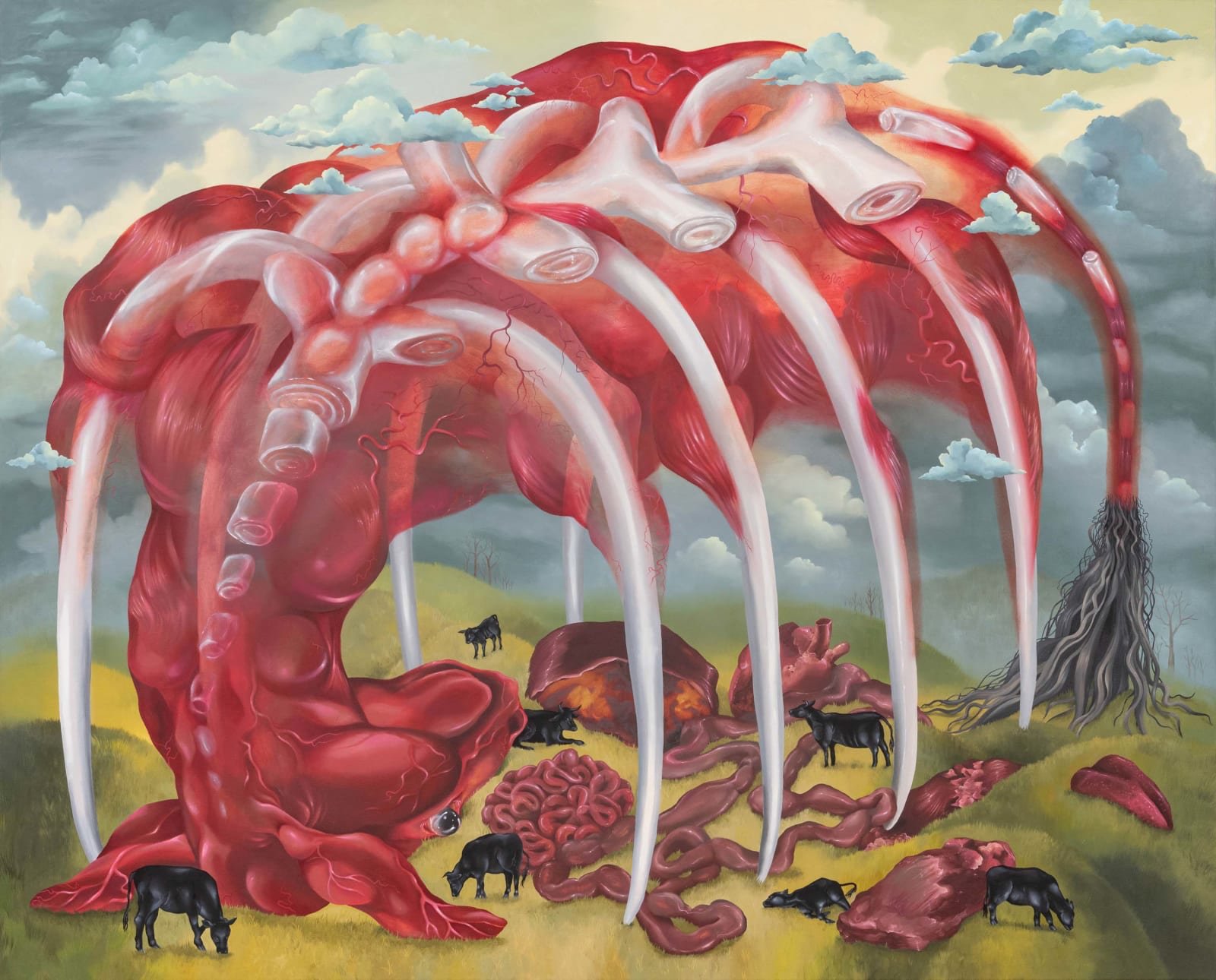 Sometimes still,
when you are pouring
from the white jug,
the milk
reminds me of the geese,
who like dogs
guarded the house.

– John Berger, excerpt from They Are The Last

The ethos of the livestock farm seeks to understand the land at a basic ecological level, supporting its natural functions to reduce damage and, in turn, mitigate harm to the wildlife and animals raised for consumption on the farm. Despite these efforts, compromises are ultimately made to maintain commercial viability, and labour becomes a required exchange based on what is valued in an eco-capitalist system. Categories of pet, pest, feral, domestic, wild, predator and prey are made more potent when individual labour value determines survival. Lyons became interested in the intersectionality of category, labour, and grief – where category constitutes the type of labour to be done and grief becomes a by-product of labour. Often confined in a sphere of sterility, loss is made undetectable by the secretive powers of mechanisation and industrialisation. Through her work, the artist challenges the normalisation of this emotion, suggesting instead, that it is not a defect to be remedied. On the farm, facing grief offers the chance to combat the harmful systems that leave animal husbandry often irresponsibly managed.

Types of labour revealed themselves to Lyons slowly, as if detangling a long web of ever-complexifying relations. She began to understand what interconnectedness might mean for the inhabitants of the farm who are not directly cared for. Navigating steps around bustling ant hills becomes an act of futility as they are inevitably crushed by the wheels of a vehicle transporting feed for chickens. A Hill Is A Home Is A Mountain pays homage to the underground workforce of the colonies, who aerate the soil and help aid in nutrient distribution. Portrait of Lonely on the other hand considers the life of an ex-racing horse, whose duty to human entertainment has ended. He spends his days in an unkept pasture as a witness to the daily productivity of the farm across the road.

Pigs offered the greatest confrontation of categorisation. Energetic and friendly, the farm’s workers often forged personal relationships with them, choosing later if they wished to partake in the eating of a culled companion. These experiences revealed the complexities of eating a body you know – the workers either felt it honoured the life to participate in its consumption, were horrified, or understood it as a simple act of finality. Lyons explores these considerations in Colostrum (Bloodline), in which she investigates the complexities of the reproductive lives of the pigs who live on the farm. Healthy females may be selected to live on as sows, granting them a longer life, though their reproductive function then becomes the stipulation of their continued survival. Colostrum, which is the first form of milk produced in the mammary glands after giving birth, offers the sows life-giving intimacy with their piglets. Acknowledging the mechanisation of the female pig’s body, while celebrating these corporeal cycles that connect her to the other pigs, highlights this formidable bond divorced from the practice of meat farming.

Included in her tasks on the farm, Lyons washed thousands of eggs every week. The washing machine included a mechanism called a candler, a backlight which revealed cracks or fallacies in the shell of an egg held before it. The artist was fascinated by the glowing eggs and the beauty revealed in the light – the varieties of colours, densities, and textures, the yolk swimming in their centres. The beauty of these features was often emphasised by intense splashes of dried blood, faeces, cracks or other evidence of their origin. The Candler (Incubation) highlights the unseen effort of the flocks of chickens, who undertake ritual labour to lay infertile eggs. As if revealed through the power of the light, these elements characterised a connection lost between process and product, signifying the asymmetry and invisibility of labour.

The success of conventional meat production is dependent on this strategy, fortifying the comfortable categorisation that aids the ease of their continuation. Earthward Love seeks to acknowledge the connection between cows and grass, whose nostalgic legacy is advertised by the same companies who benefit from their separation. Bound both to life and death, here is where we can meet the cows in the complexities of their experiences, fostering an acceptance that we are to never know the intimacies of their emotional lives, but recognising that our relations might gain power in this unknowing.