Annely Juda Fine Art presents an exhibition of 20 drawings by Kasimir Malevich (1879- 1935) and 20 tea bowls by Raku Jikinyū (b.1949) from his recent White Rock series. The exhibition also includes one classic Black Raku tea bowl made in the early 1580s by the first Raku master Chōjirō (d.1589). The exhibition follows the exhibition Kichizaemon X Malevich held from September 2021 to January 2022 at the Sagawa Art Museum in Japan and is the first time for the work of Jikinyū to be shown in the UK. 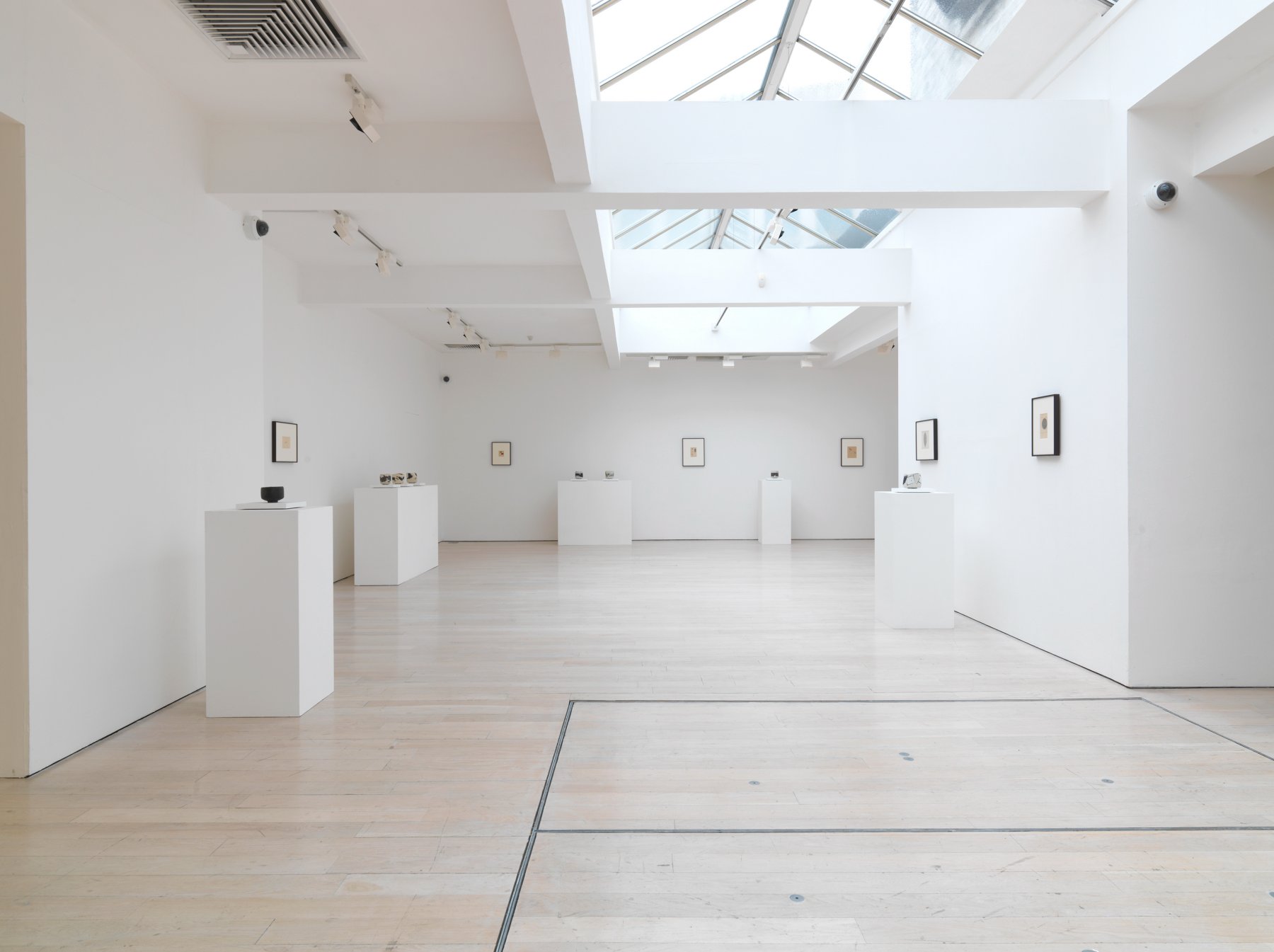 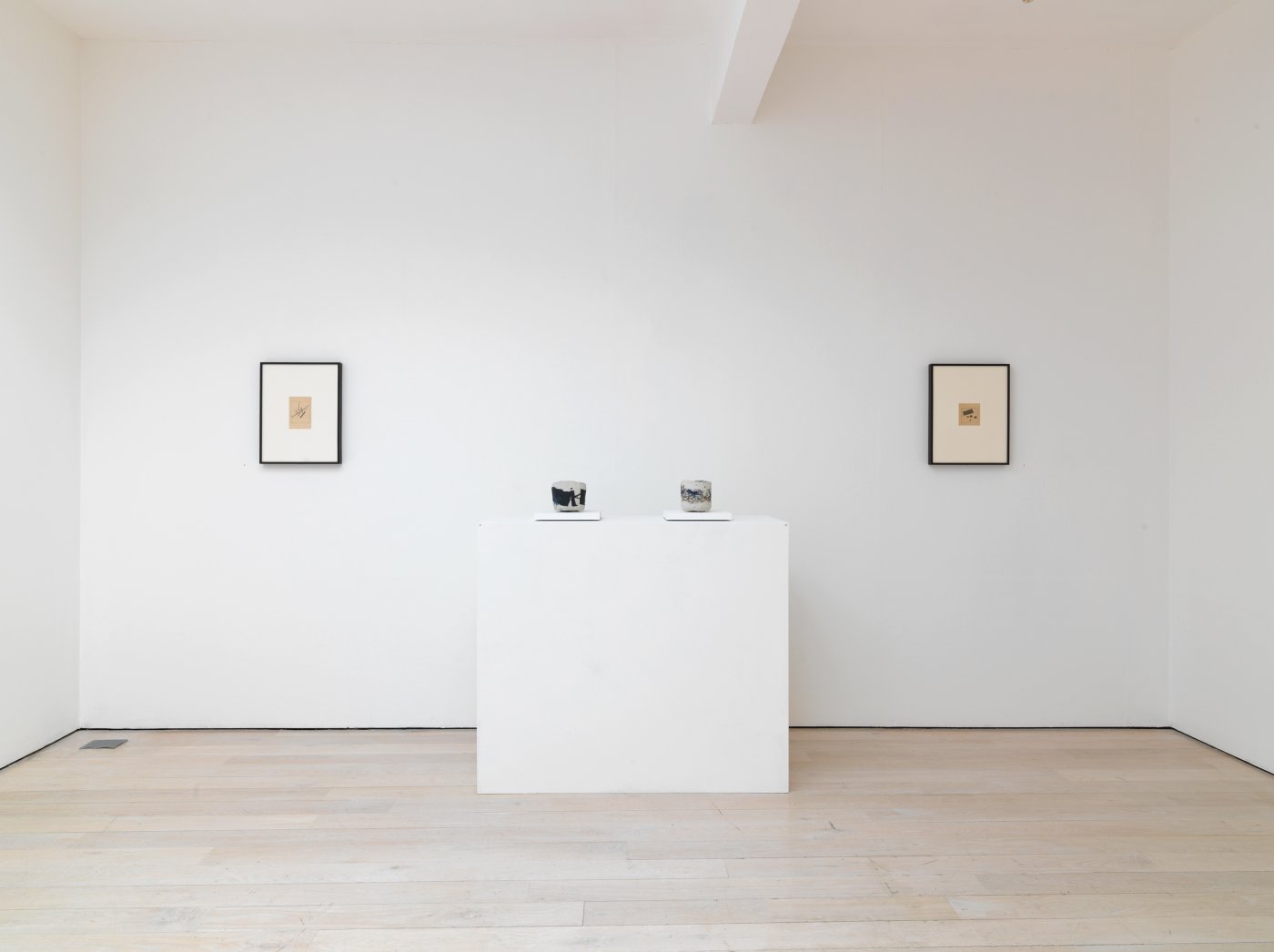 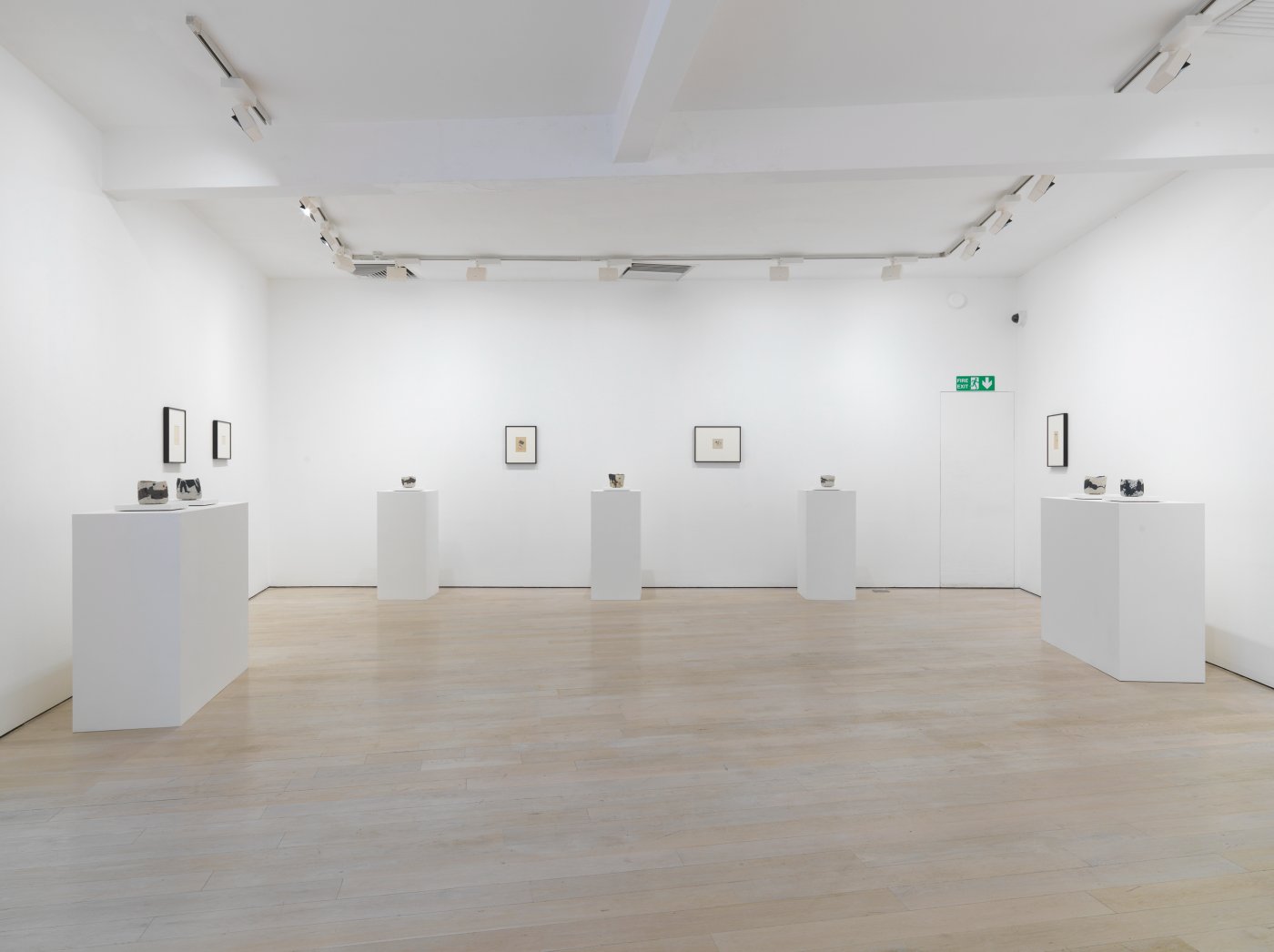 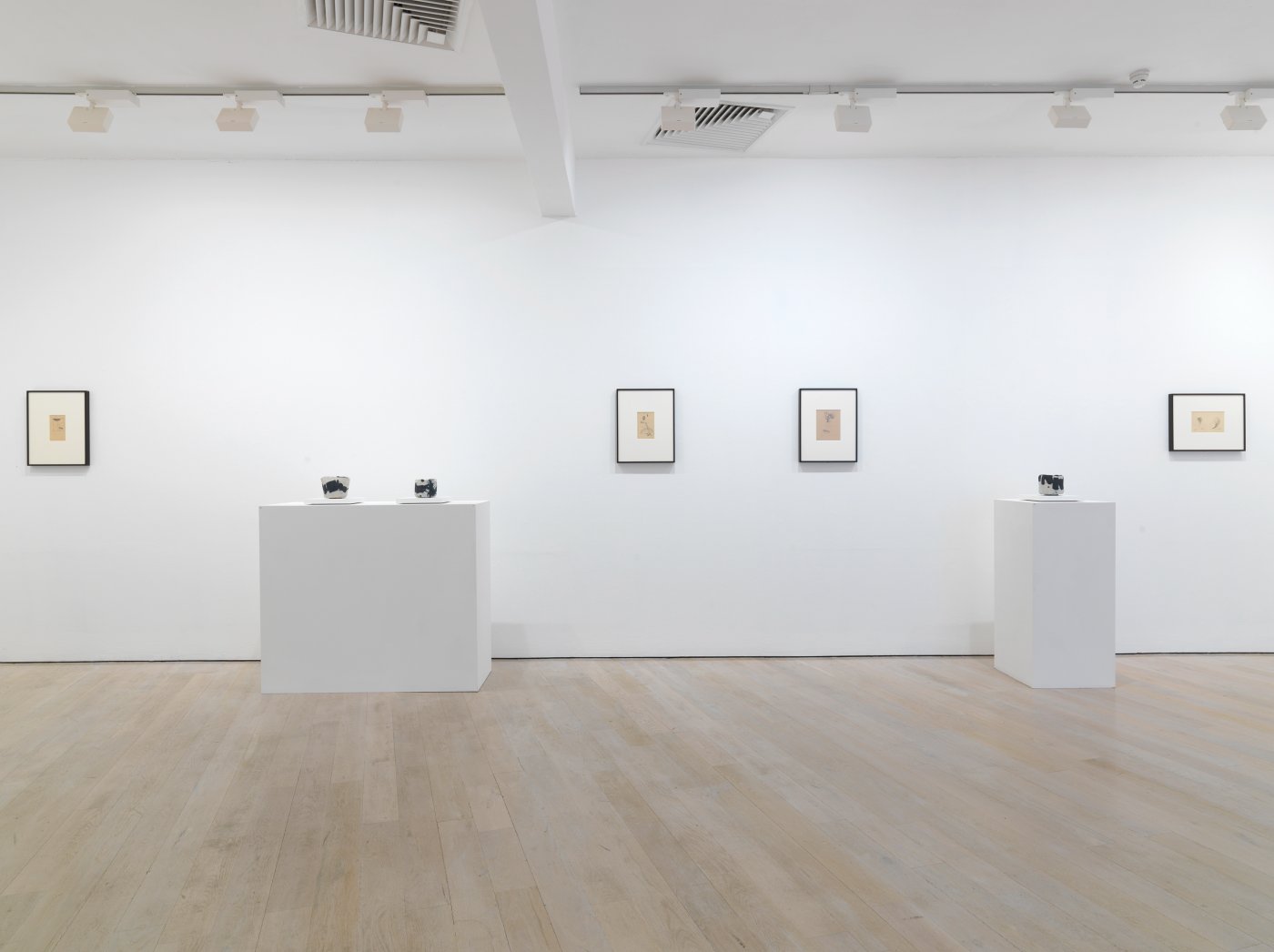 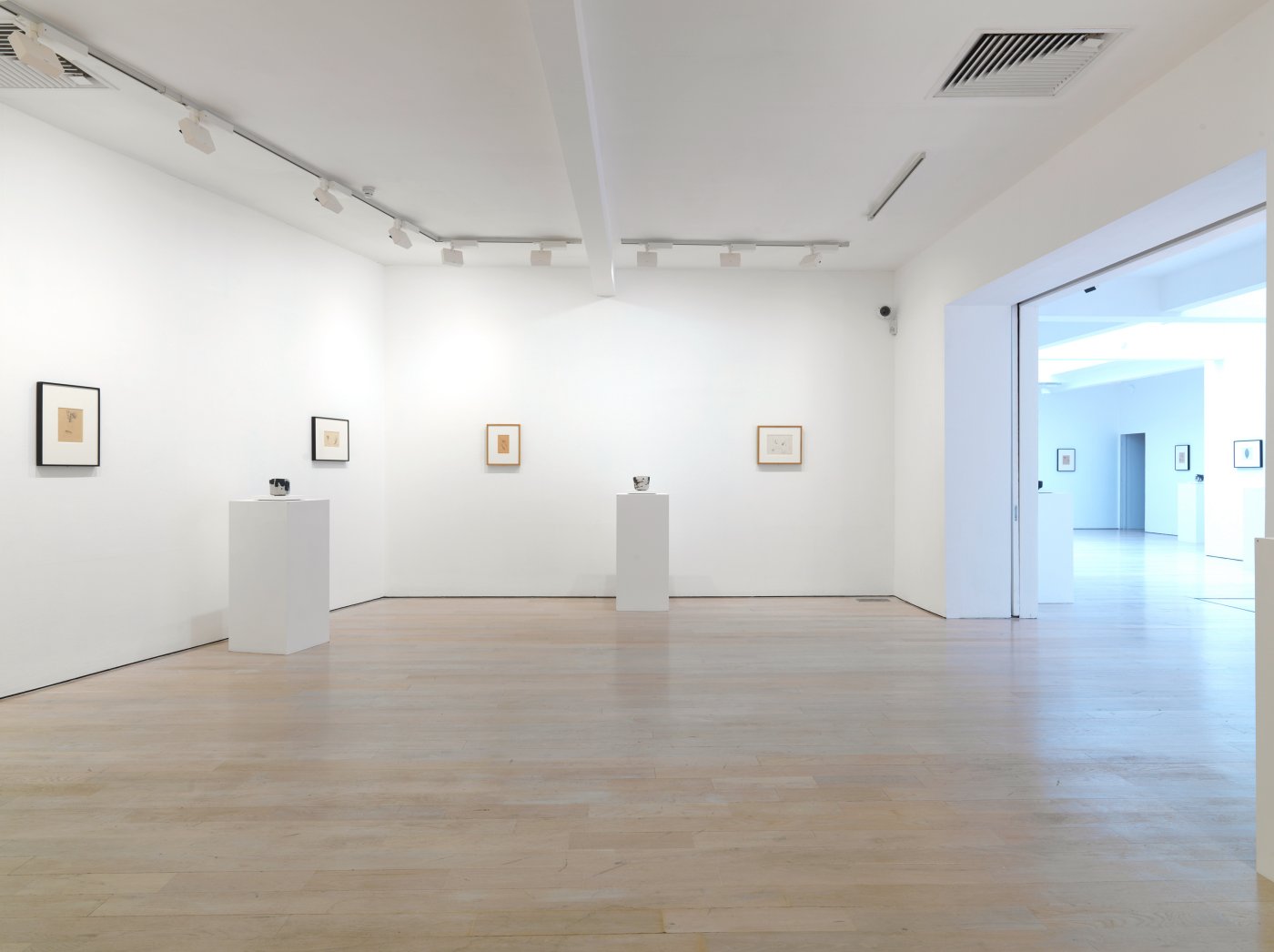 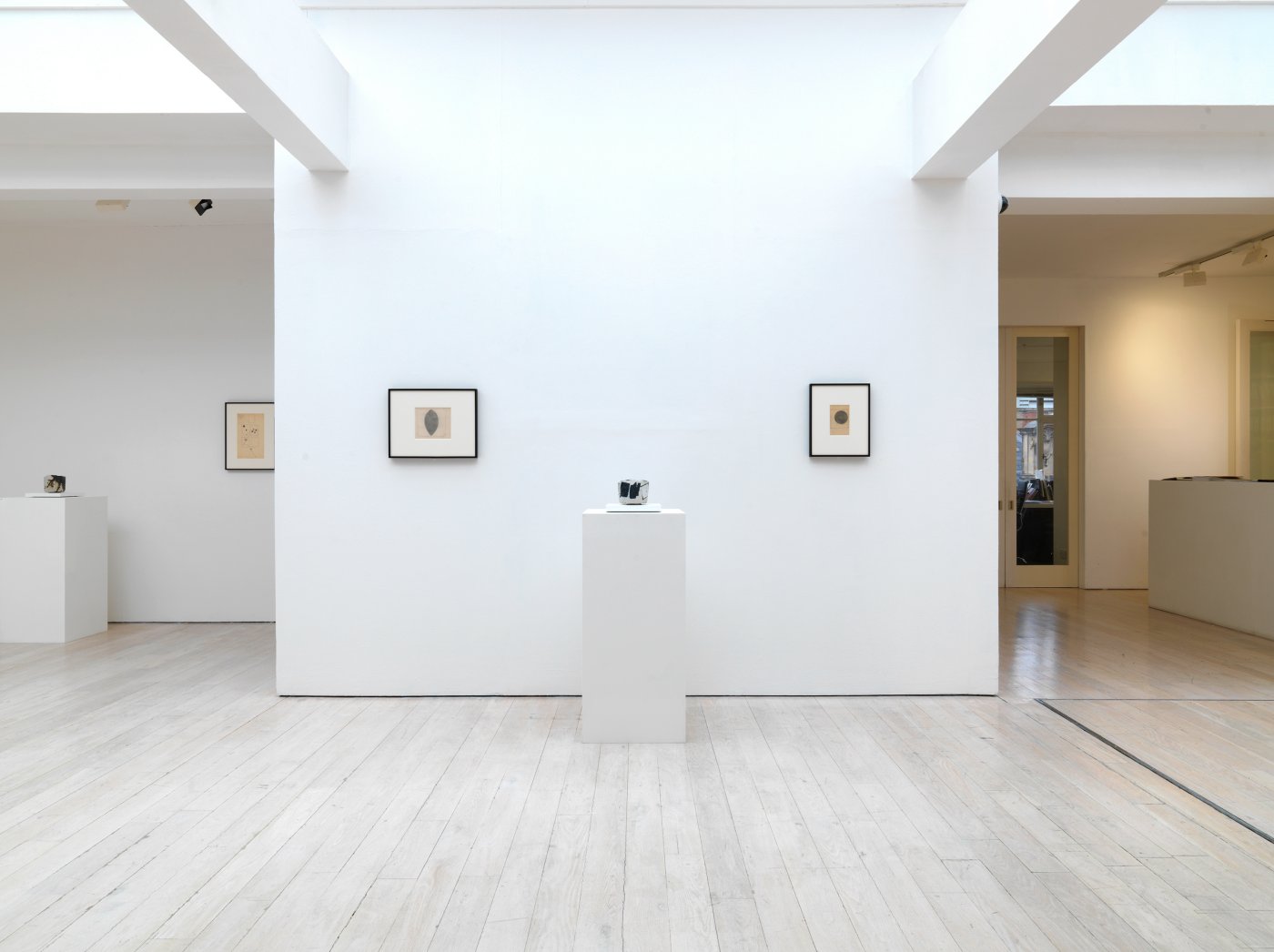 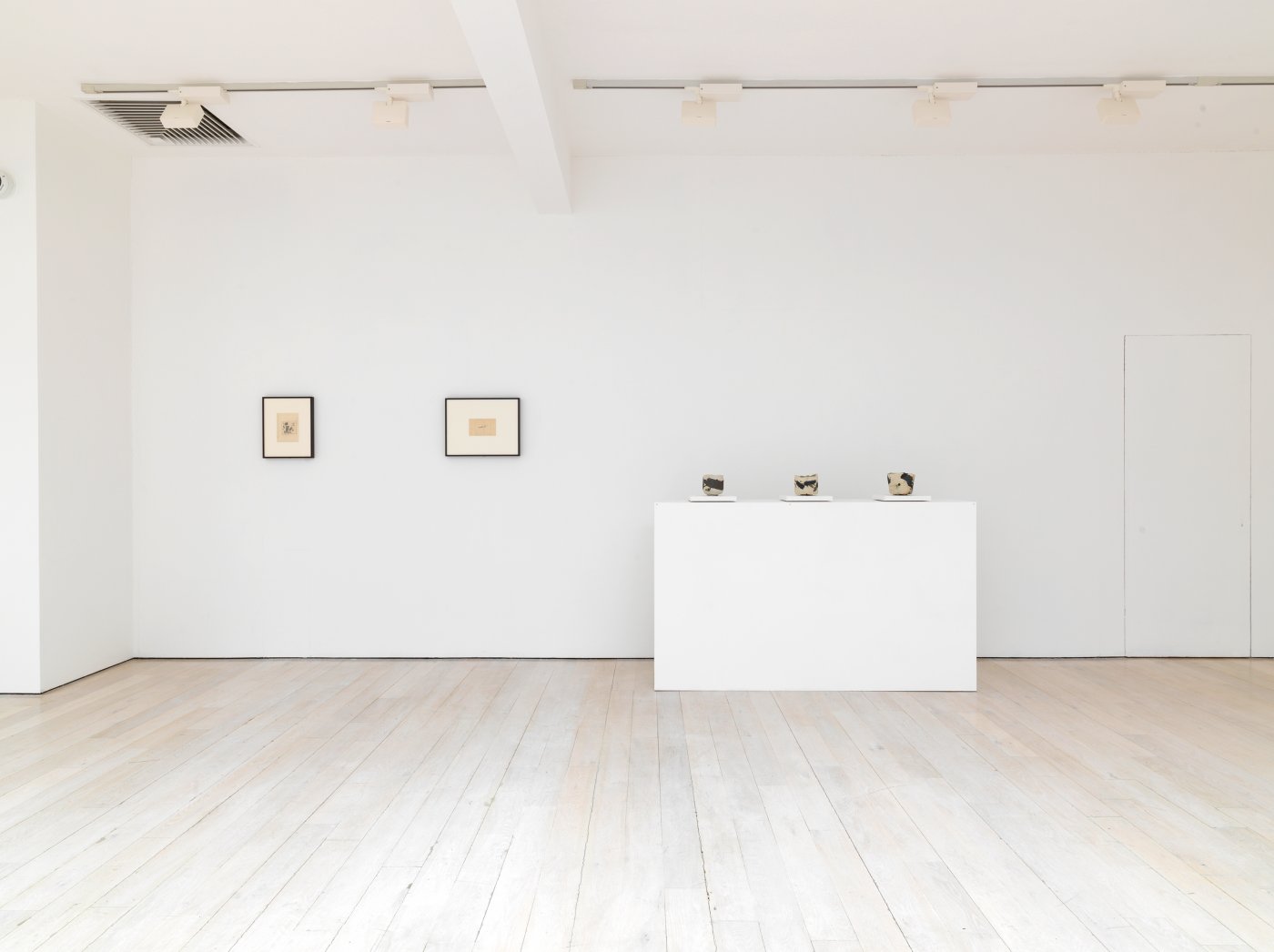 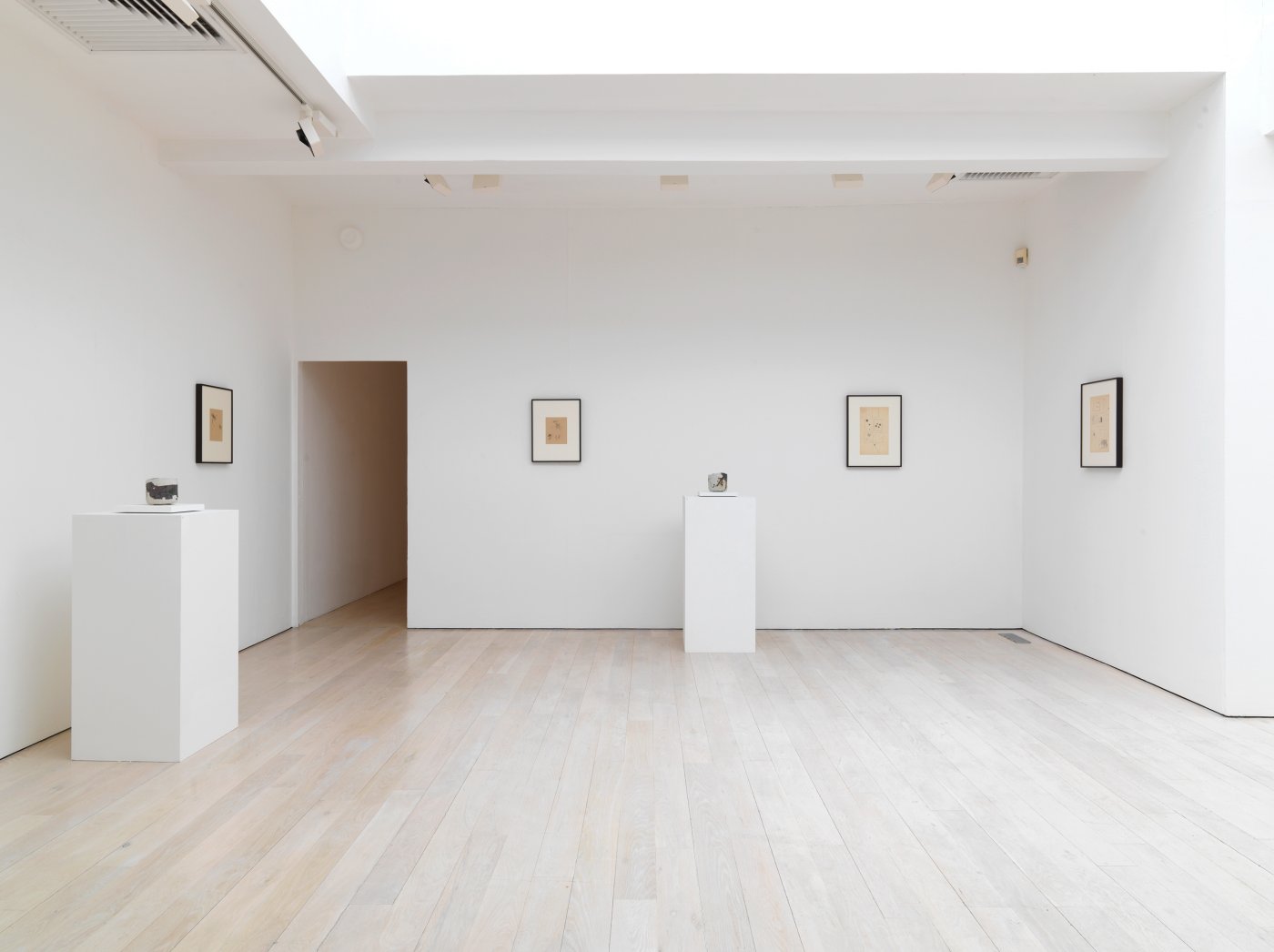 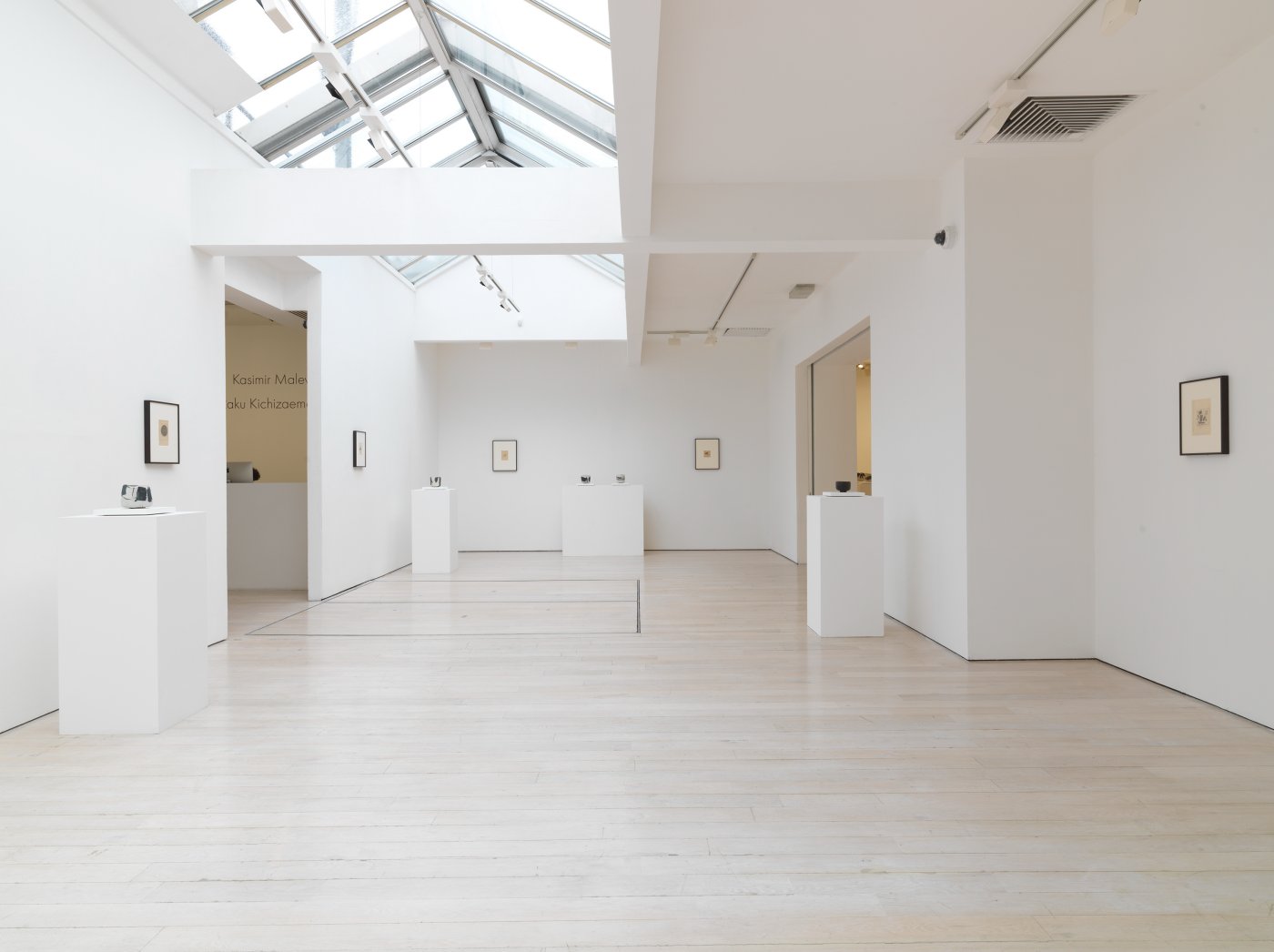 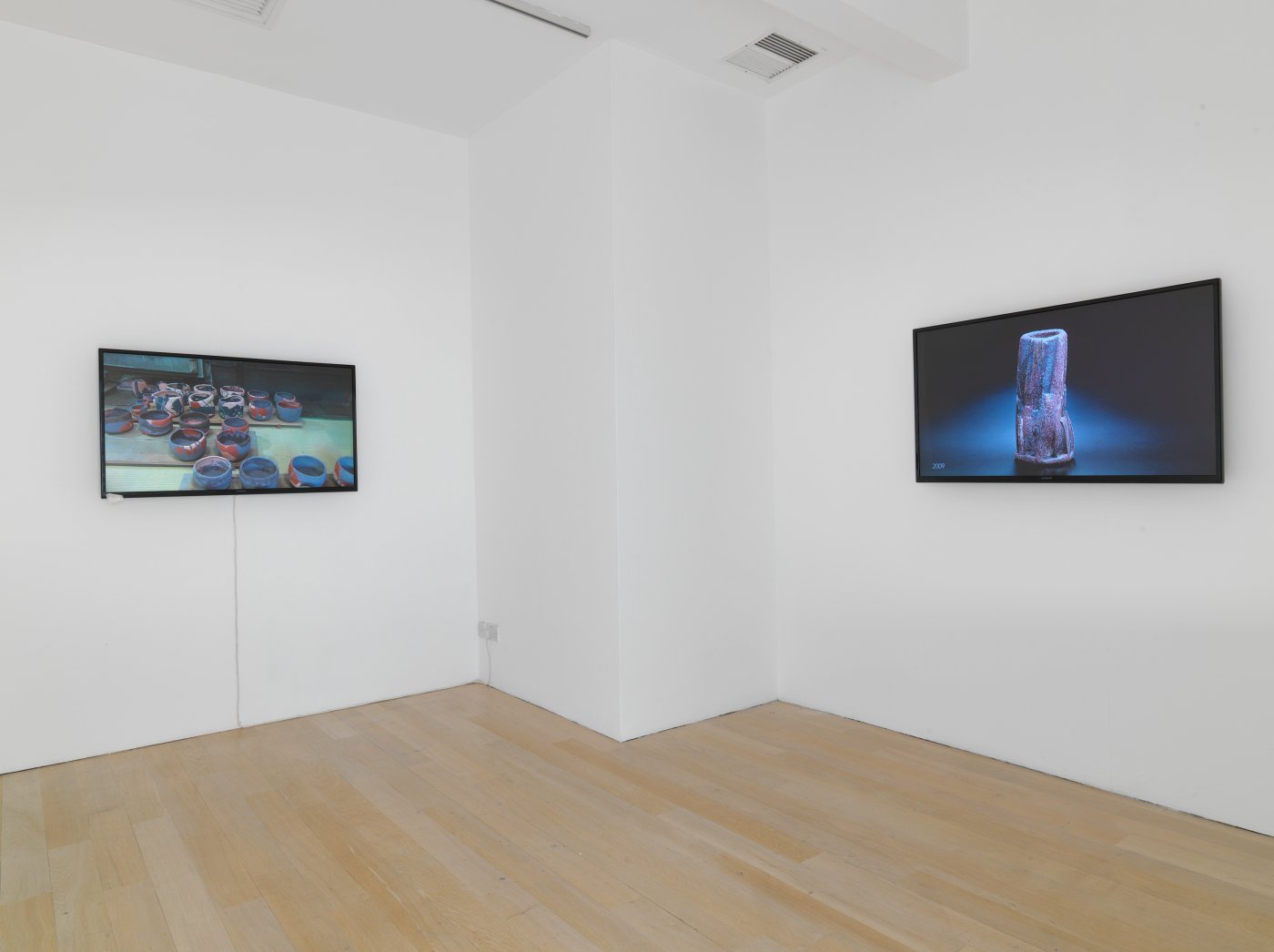 Raku tea bowls are shaped by hand rather than being thrown on the potter’s wheel and are drawn from the kiln at the height of the firing so that they cool rapidly in the atmosphere outside. Their purpose is for drinking whipped tea (matcha) in the tea ceremony (chanoyu). Typically either monochrome red or monochrome black, Raku tea bowls were considered radically avant-garde when they first appeared in the late sixteenth century. They were synonymous with the ideals of the wabi style of tea ceremony pioneered by the renowned tea master Sen Rikyū (1522-91). The Raku family has lived and worked on the same plot of land in Kyoto since 1586. Jikinyū succeeded to the family headship as Raku Kichizaemon XV in 1981 and assumed the name Jikinyū when he retired in favour of his elder son, who became Raku Kichizaemon XVI in July 2019. He has devoted his career to exploring the possibilities of the traditional tea bowl format in a constant search for new modes of expression. His tea bowls are characterised by bold sculptural trimming and the creative use of the yakinuki firing method.

Kasimir Malevich was a Russian avant-garde artist famous as the pioneer of Suprematism and the championing of non-objectivity. His most representative works are his Black Square painting of 1915 and his White on White of 1918. These seminal modernist works had a major influence on the development of 20th century abstract art and minimalism. Of the artist’s works on paper in the exhibition, Andréi Nakov, editor of Malevich’s catalogue rasionné, writes:

“We must be especially attentive to the work of the artist’s hand and pencil, for it is always of a great formal efficiency corresponding to the conceptual ambition driving it, the necessity of clarity underlying new forms. […] In every instance the graphic creation of Non-Objective planes — Suprematist forms — is particularly strong. The forms appear with a staggering simplicity and accuracy yet also with undeniable feeling.”

Meanwhile, Raku Jikinyū writes the following on the influence of Malevich’s work:
“As regards Malevich, my interest in him became all the greater in 2015 when the exhibition Raku: The Cosmos in a Tea Bowl was shown at the Hermitage Museum in St Petersburg and the Pushkin Museum of Fine Arts in Moscow. It was a large-scale exhibition of 170 works covering the sixteen-generation history of the Raku family from the time of our founder Chōjirō up to the present day. There was one work by Malevich I particularly wanted to see while I was in Russia. It was his Black Square of 1915 owned by the Tretyakov Gallery in Moscow. Its pure blackness has long affected me and has rooted itself deeply into my consciousness.”

This exhibition is the result of a long friendship between David Juda, Raku Jikinyū and his wife Fujiko. It is our honour to show the work of Raku Jikinyū in the UK. It is also thanks to the expertise of Andréi Nakov, specialist in the Russian avant-garde and editor of the Kasimir Malevich catalogue raisonné.

A fully-illustrated catalogue of the exhibition, including essays by Raku Jikinyū and Andréi Nakov, will be available.