Karin Kneffel: Face of a Woman, Head of a Child

Karin Kneffel: Face of a Woman, Head of a Child


Images come from other images. The figures I painted oscillate back and forth between depicted sculpture and reality, becoming more real in the picture than in the sculpture.
—Karin Kneffel

Gagosian presents Face of a Woman, Head of a Child, a new body of work by Karin Kneffel in which the painter addresses human portraiture for the first time. This is her third exhibition with the gallery and her first solo exhibition in Rome in twenty-five years since her residency at Villa Massimo. 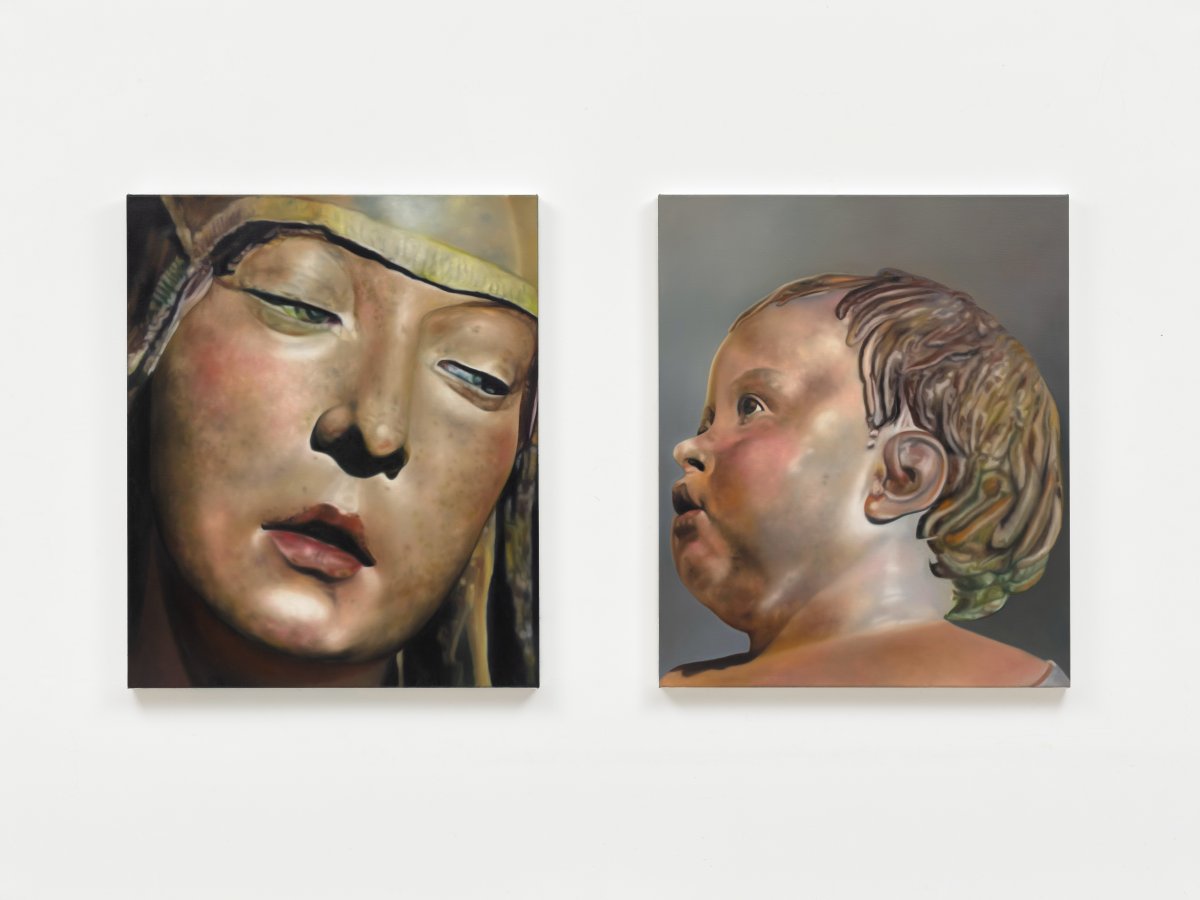 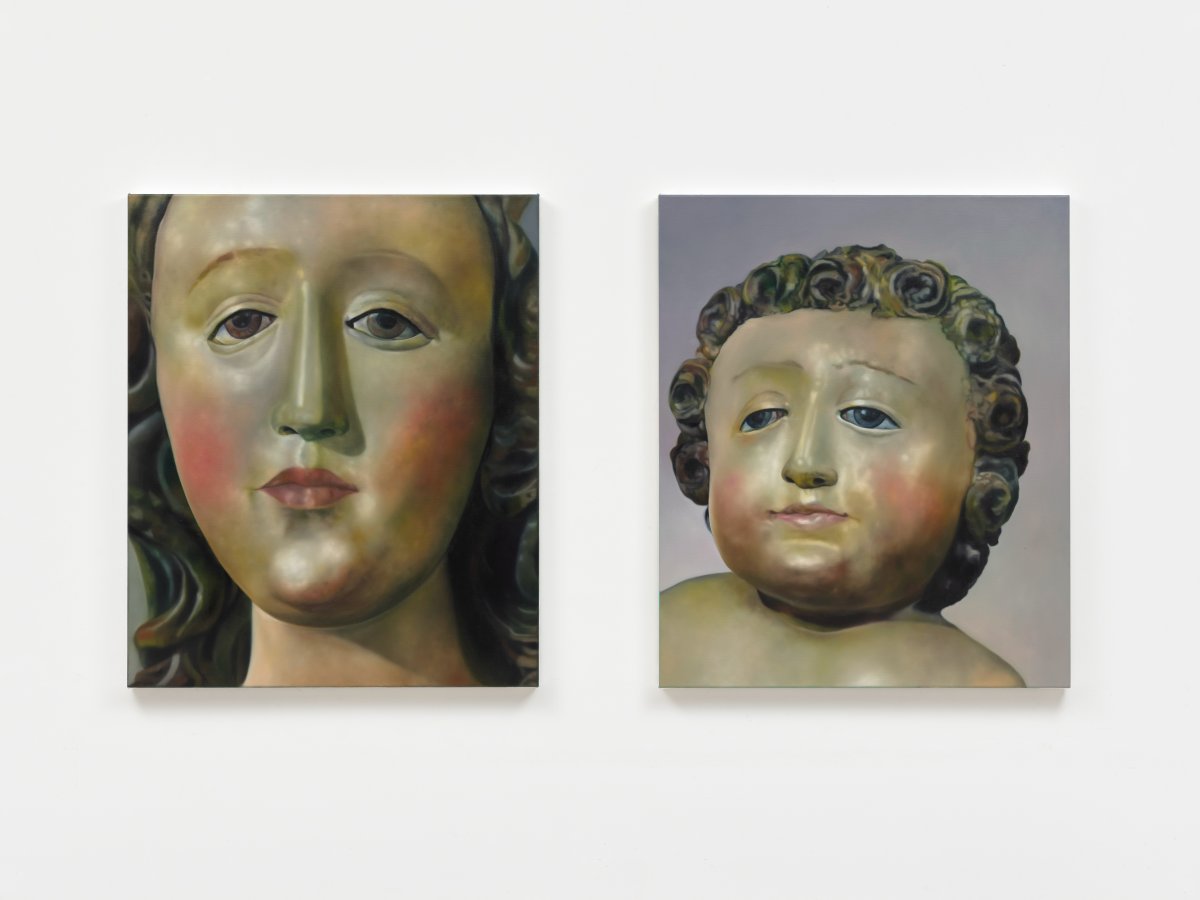 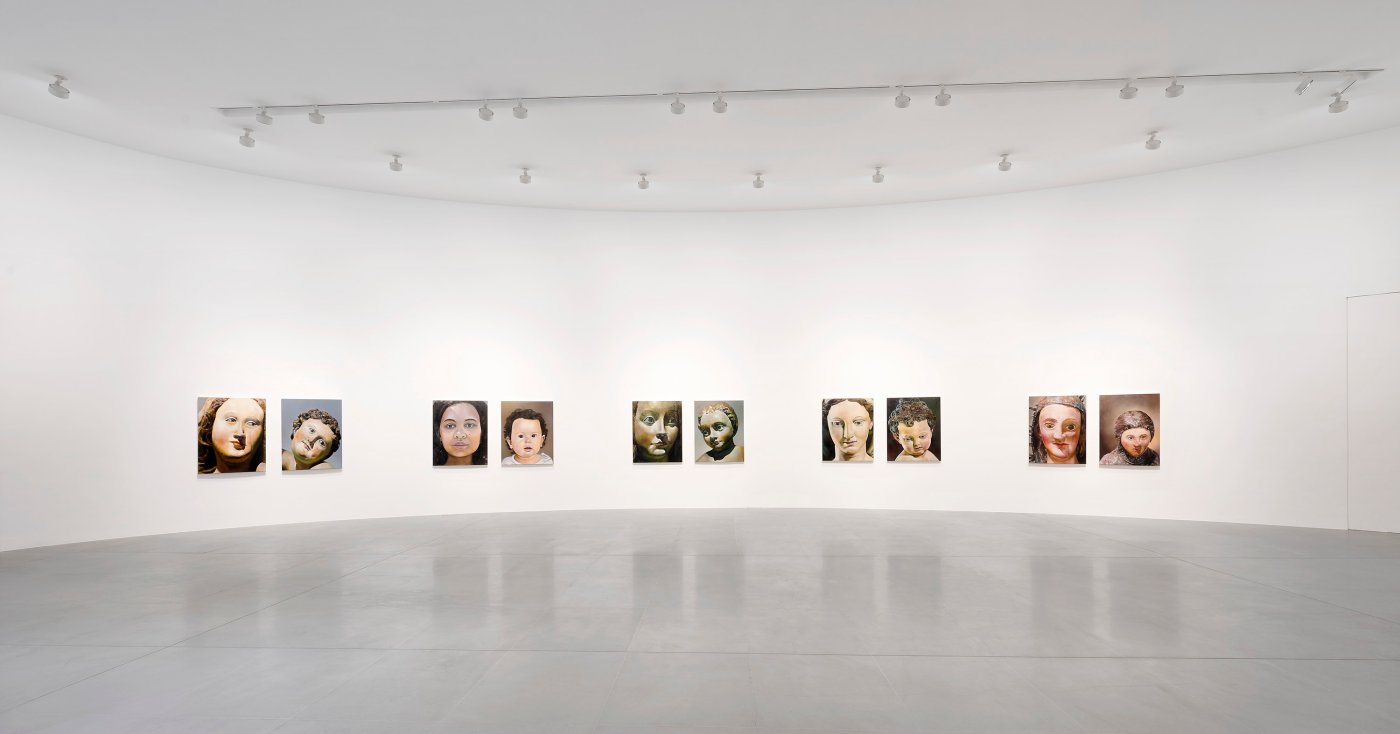 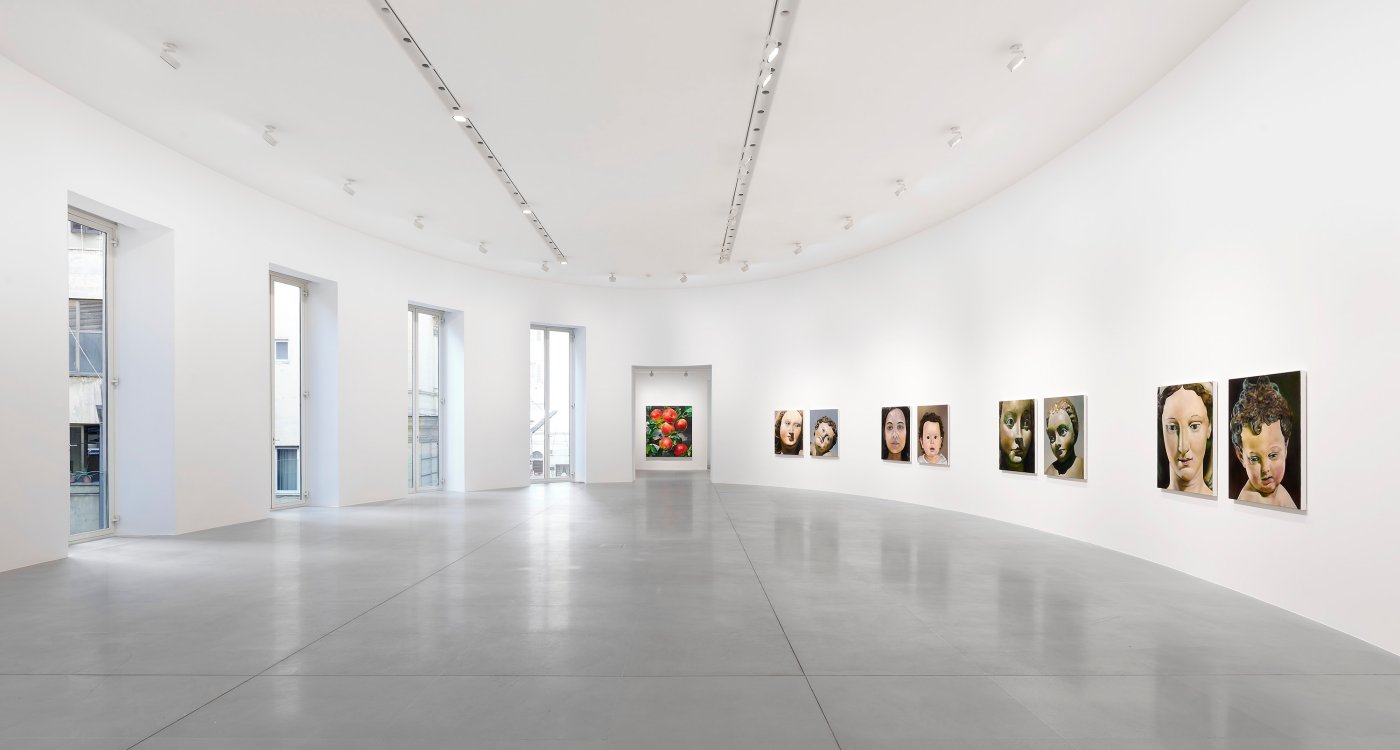 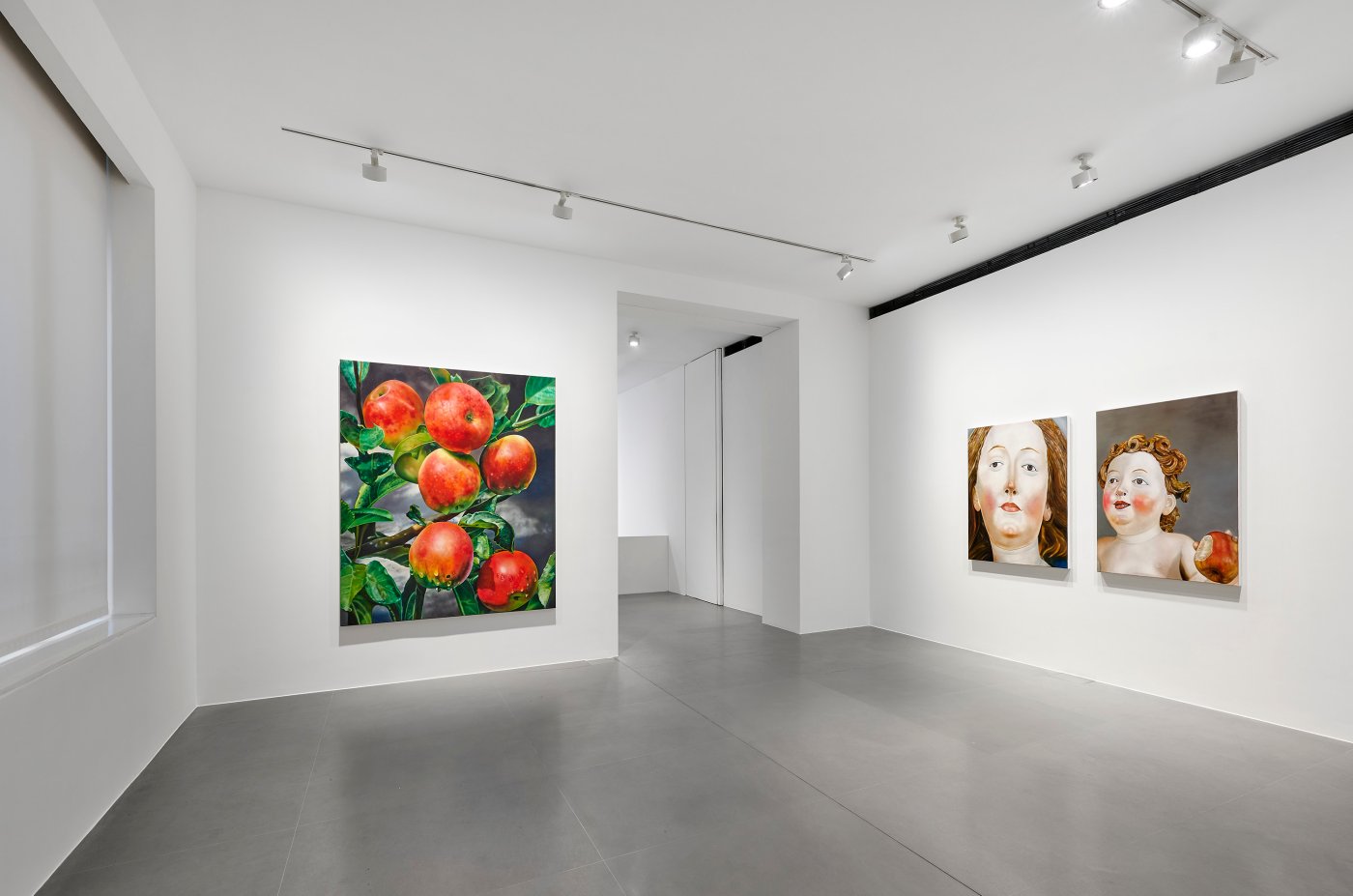 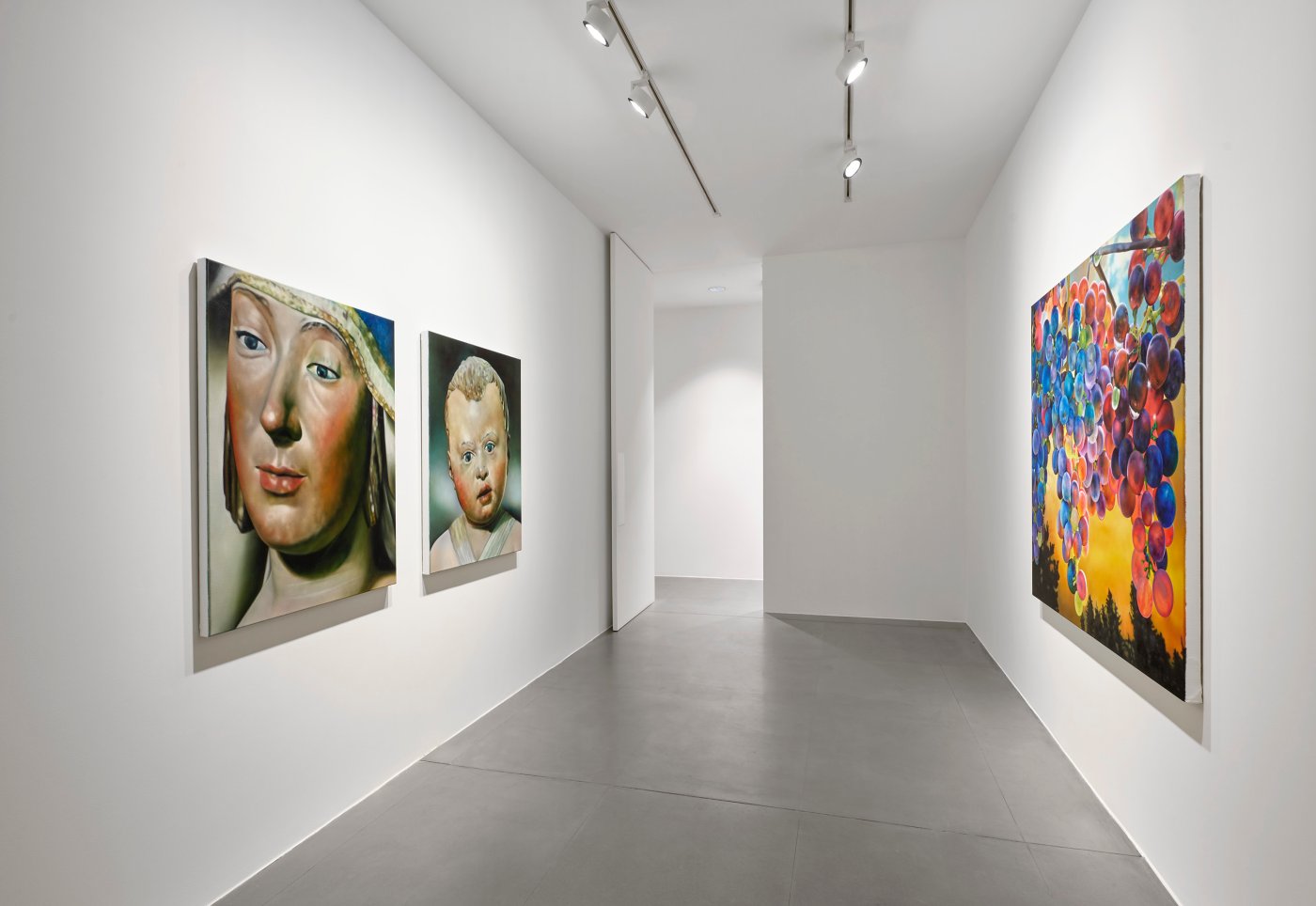 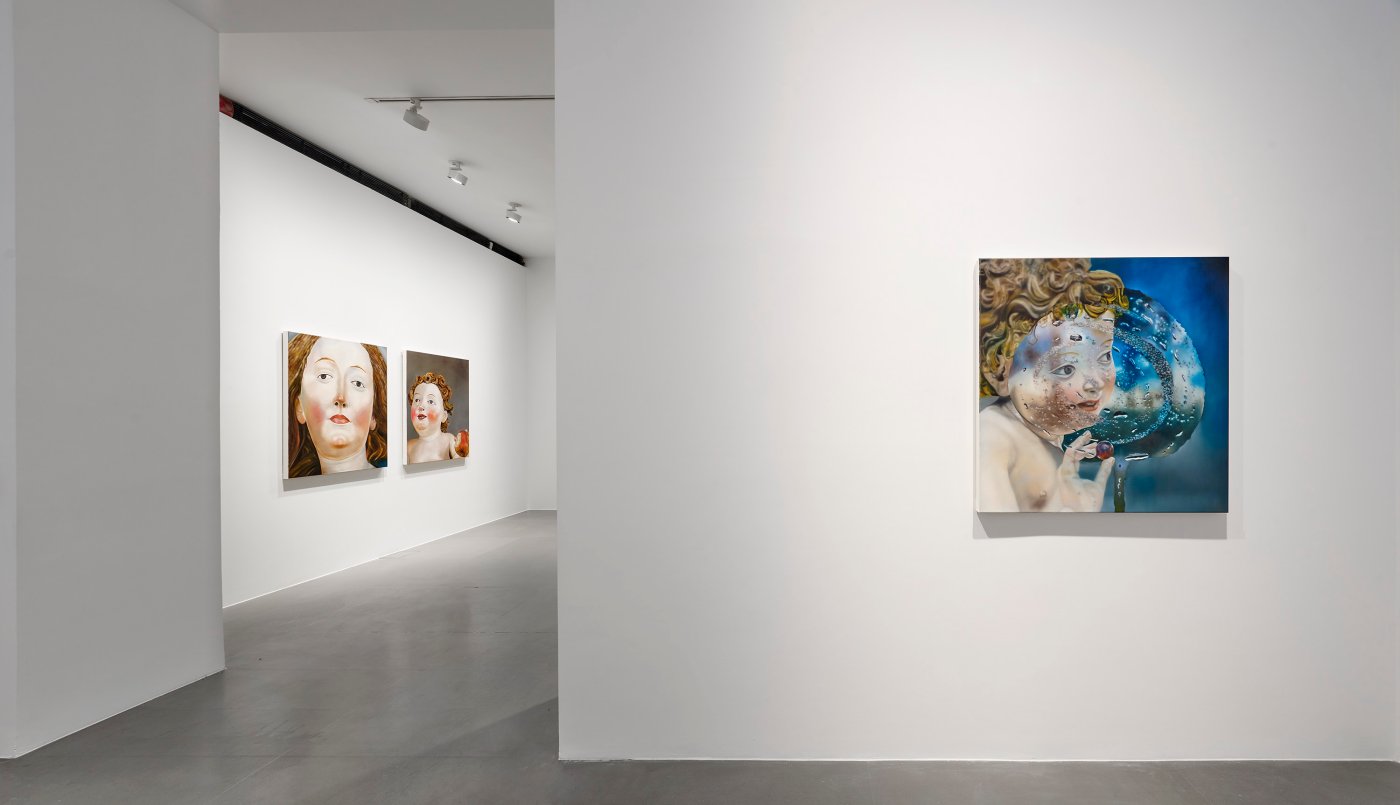 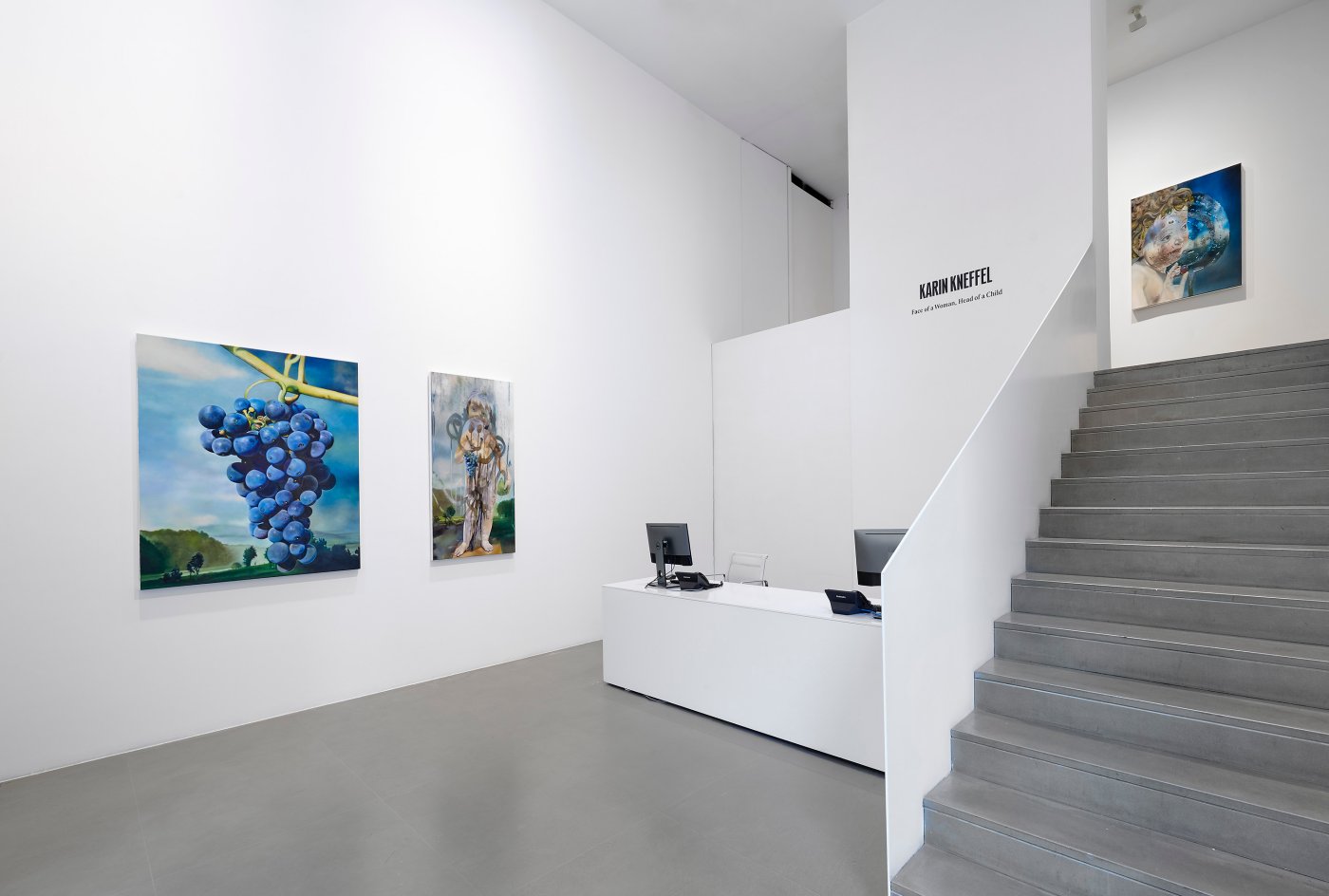 Throughout her career, Kneffel has reflected on the relationship between painting, space, and time by layering and recombining things, places, traces, and incidents in a seductively realist manner. Whether inspired by personal memories or art historical sources, her interior scenes and still lifes deftly exploit the medium’s representational potential while underscoring its inherently fictive nature.

Despite the dramatic shift in subject matter, Kneffel’s refined technique remains consistent, the smooth and luminous surfaces of her oil paintings revealing great visual depth and conceptual complexity. In this unprecedented approach, she depicts the faces of historical polychrome wooden figures, rendered uncanny and arresting by upscaling and cropping. As in her baroque still lifes, Kneffel harnesses the full powers of her painterly methods to describe in granular detail the strong contours and subtle nuances of each rustic sculpted and painted visage.

Kneffel has a long-standing interest in sacred figures from the early Northern Renaissance period by sculptors both known and unattributed. In these sculptures, illusionistic painterly effects, especially in the rendering of textiles and the treatment of flesh tones, greatly enhance their emotional immediacy. For years, she has photographed the sculptures as she encounters them, but this is the first time that she has employed such extensive field research in a painting series. While these archetypal models embody the era’s widespread religious devotion and its emerging humanistic ideals, in her untitled paintings Kneffel secularizes them by eliding all identifying attributions, titles, and iconography—veils, halos, and so on—to focus on their facial features. Zooming in on her subjects, she paints substantially enlarged close-ups of the two figures in pairs of identically sized individual canvases. Although woman and child are united by a marked physical resemblance, their gazes are oddly dislocated by the formal space separating them.

Face of a Woman, Head of a Child represents a shift away from the visual paradoxes of Kneffel’s haunting interior tableaux, although certain elements recall her hyperbolic renderings of bunches of grapes or clusters of apples in the still lifes that recur in her repertoire. Treated as paired portraits created from a single viewpoint, these diptychs are meticulous representations of specific subjects, painted with close attention to the materiality of the original sculptures. Kneffel conveys the palpable qualities of the carved and painted wooden sculptures by capturing the play of light on their surfaces, highlighting their three-dimensional forms and the stylistic decisions of the sculptor. She emphasizes the idiosyncratic features of each woman and child, heightening their surreal sense of artificiality through their imperfections and anatomical eccentricities. In de-emphasizing the religious iconography, Kneffel presents the sculptures as highly subjective three-dimensional objects, imbued with animate vitality through painterly contour and color—a woman’s tender, protective gaze or the blush of a baby’s cheek, like a ripe apple.

Among these otherworldly pairings, two couples from modern times present themselves—Kneffel’s younger self with her infant son, now a grown man; and another young mother and child from her inner circle who are emblematic of a new, more diverse Germany. By juxtaposing portraits from her own context and community with those of archetypal history, Kneffel proposes portraiture, representation, and family bonds as elements of a persistent dialogue in life and art.