“There are memories lost in asphalt but that reality is also reflected in the desire we place in the stars above.” — Kahlil Robert Irving 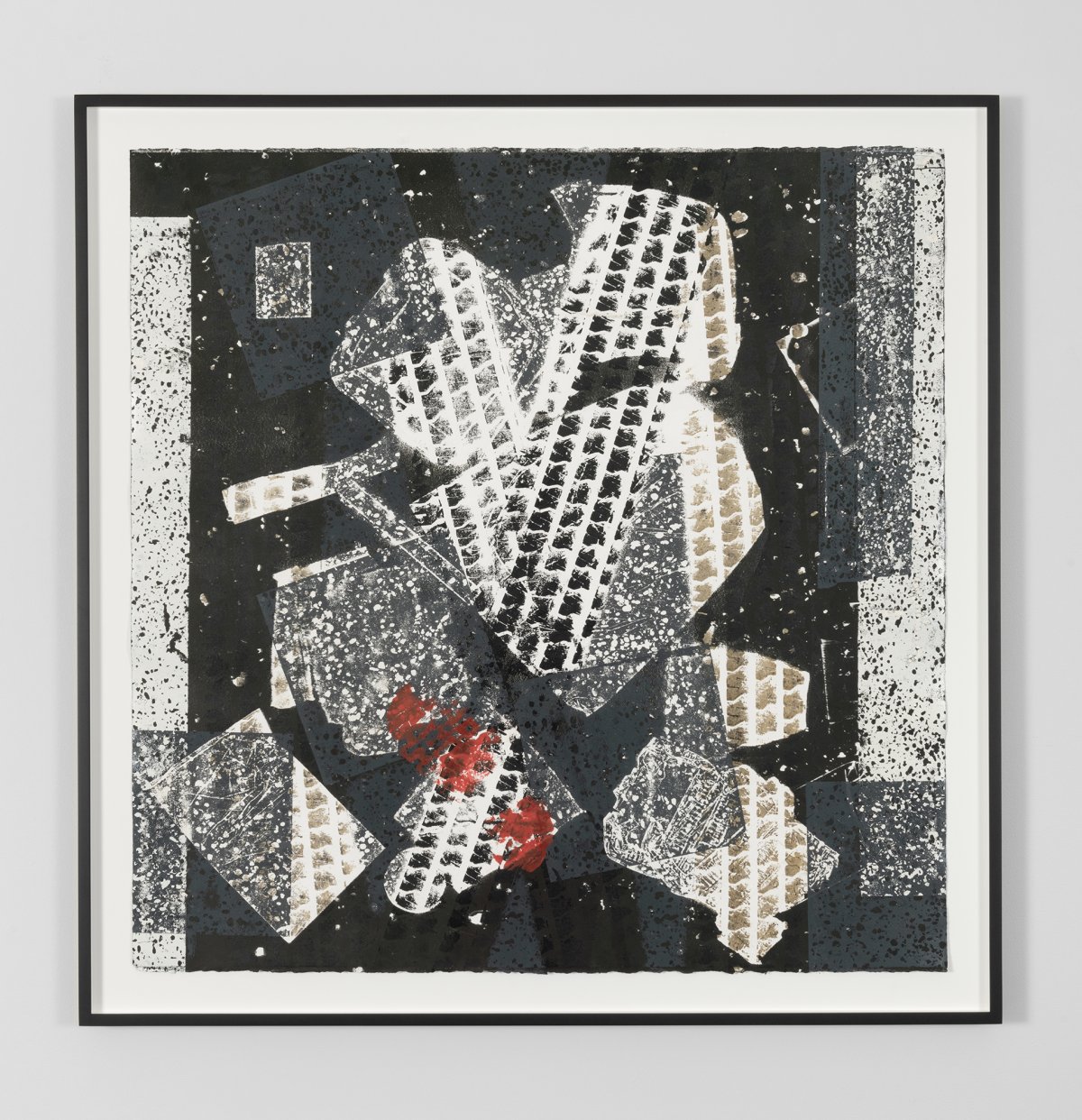 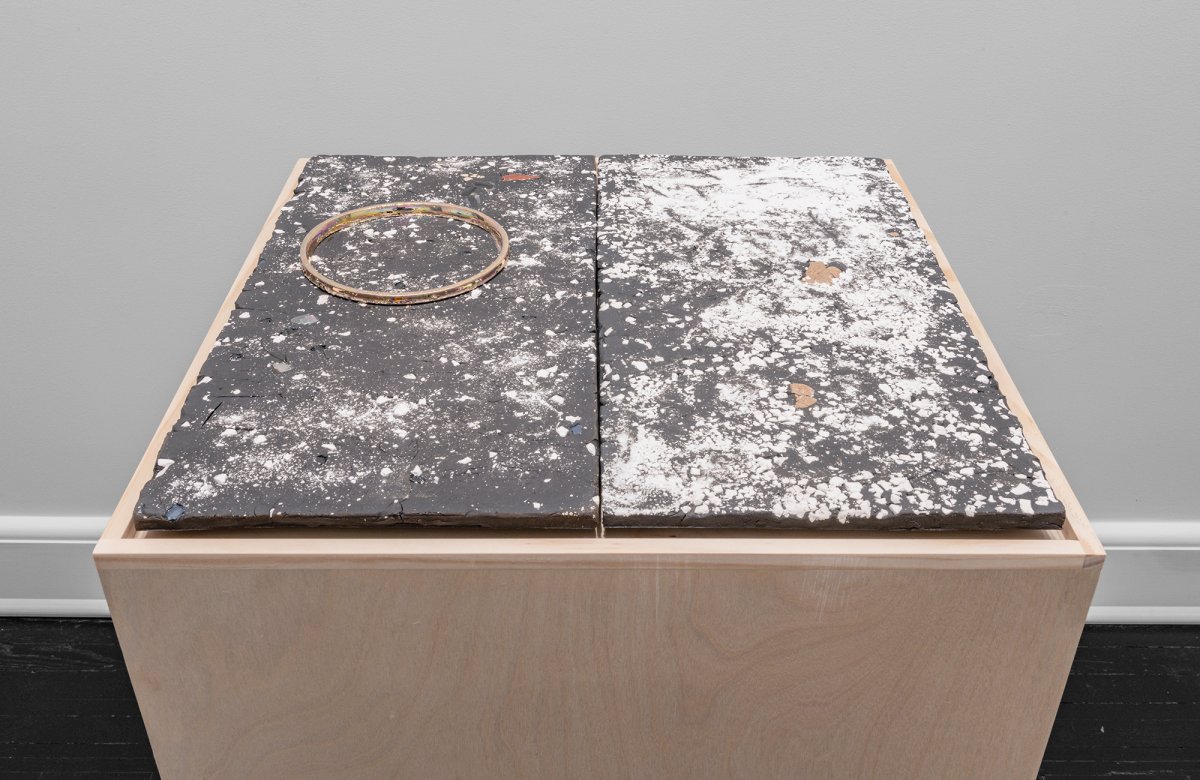 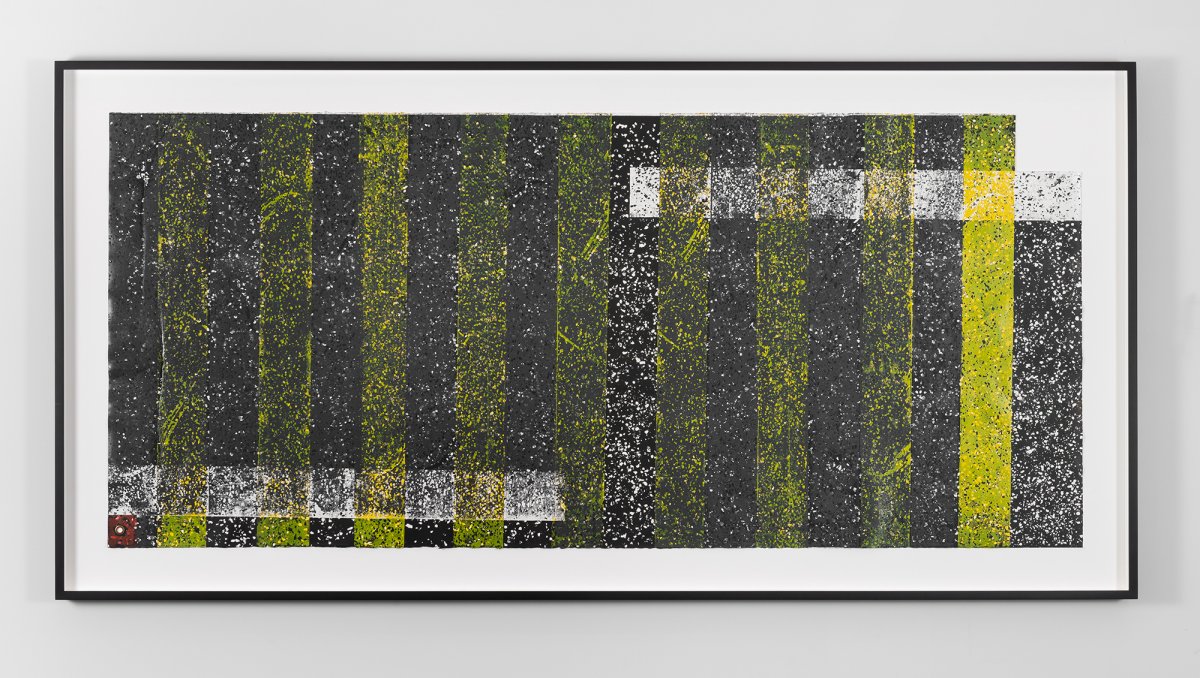 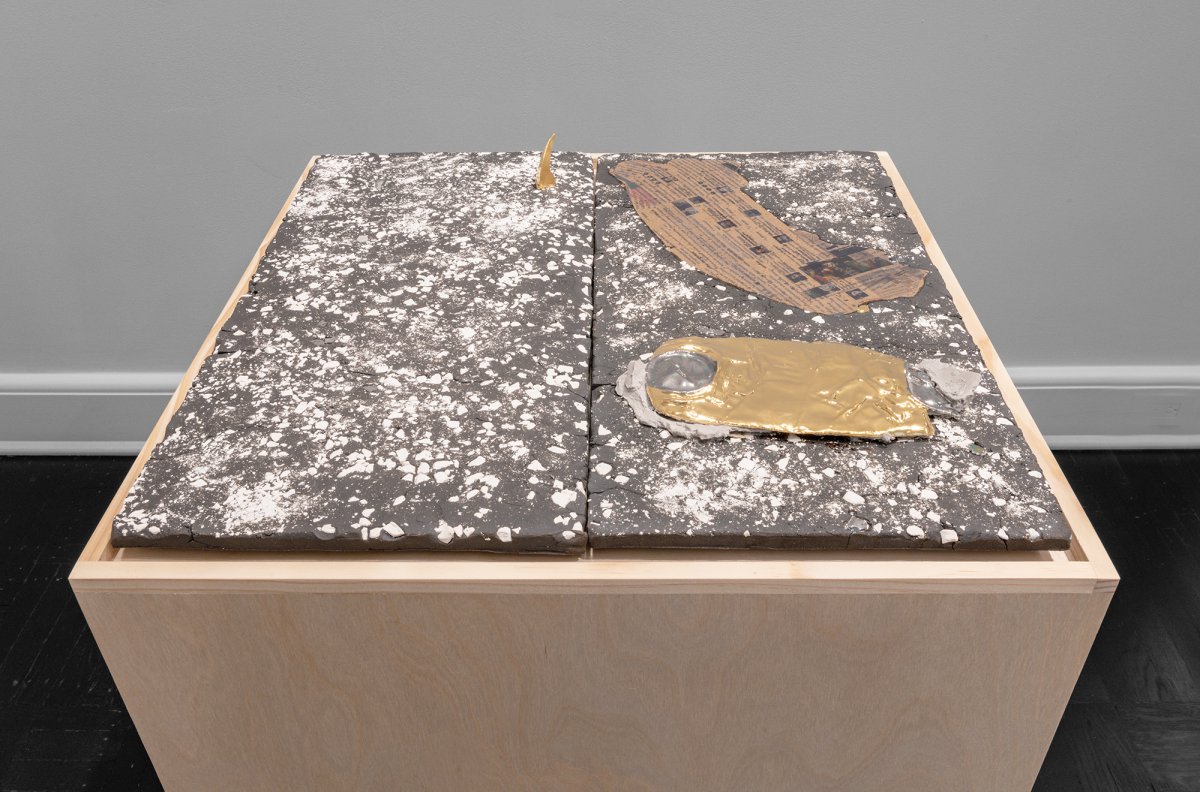 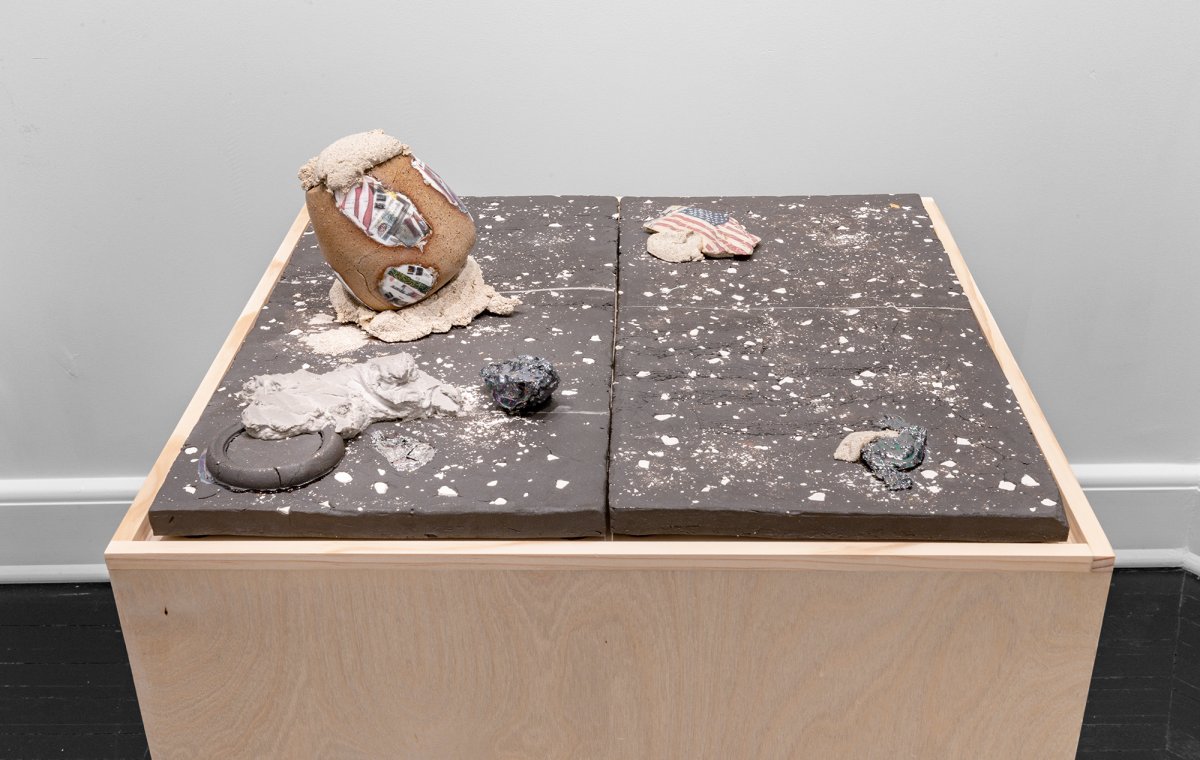 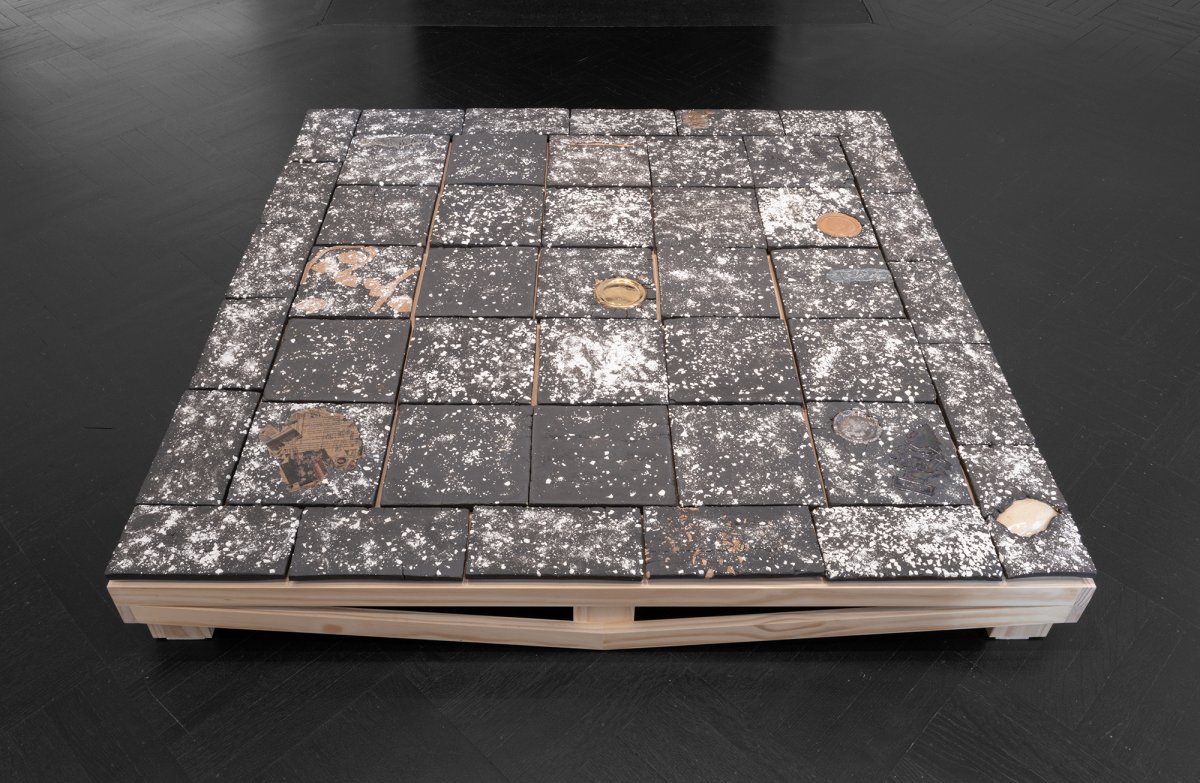 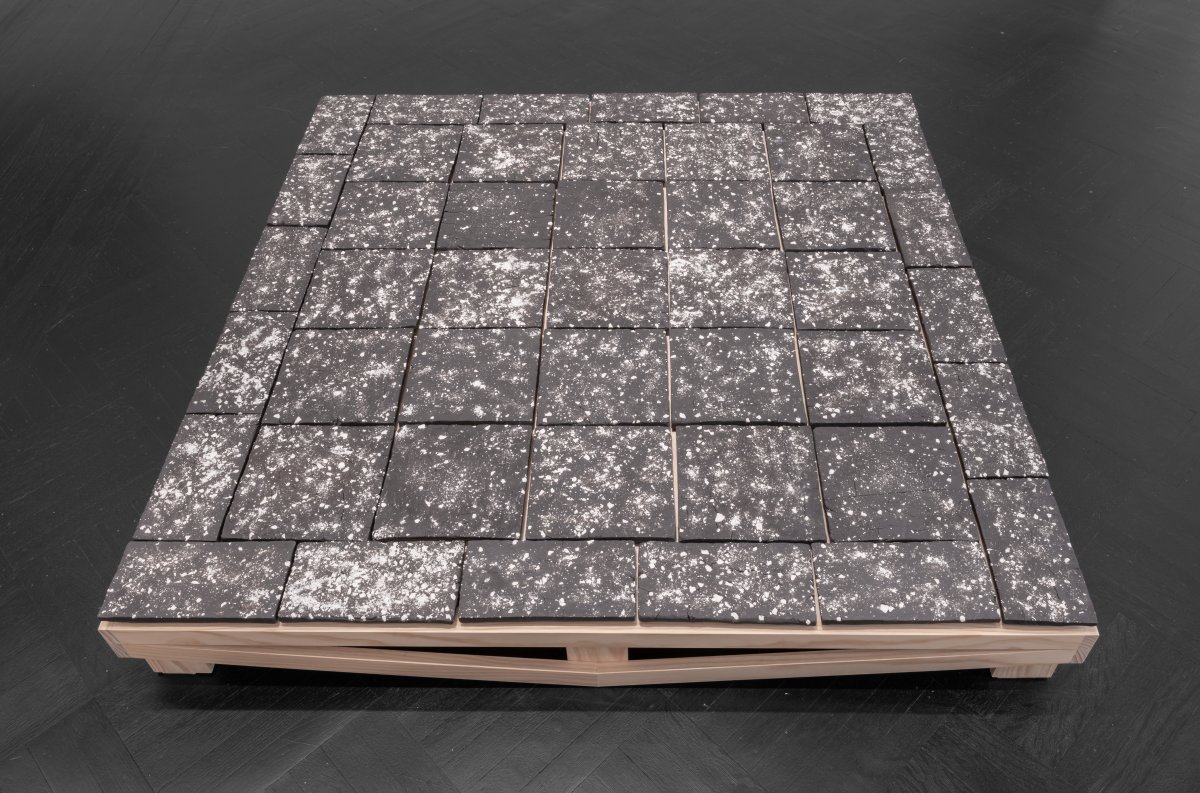 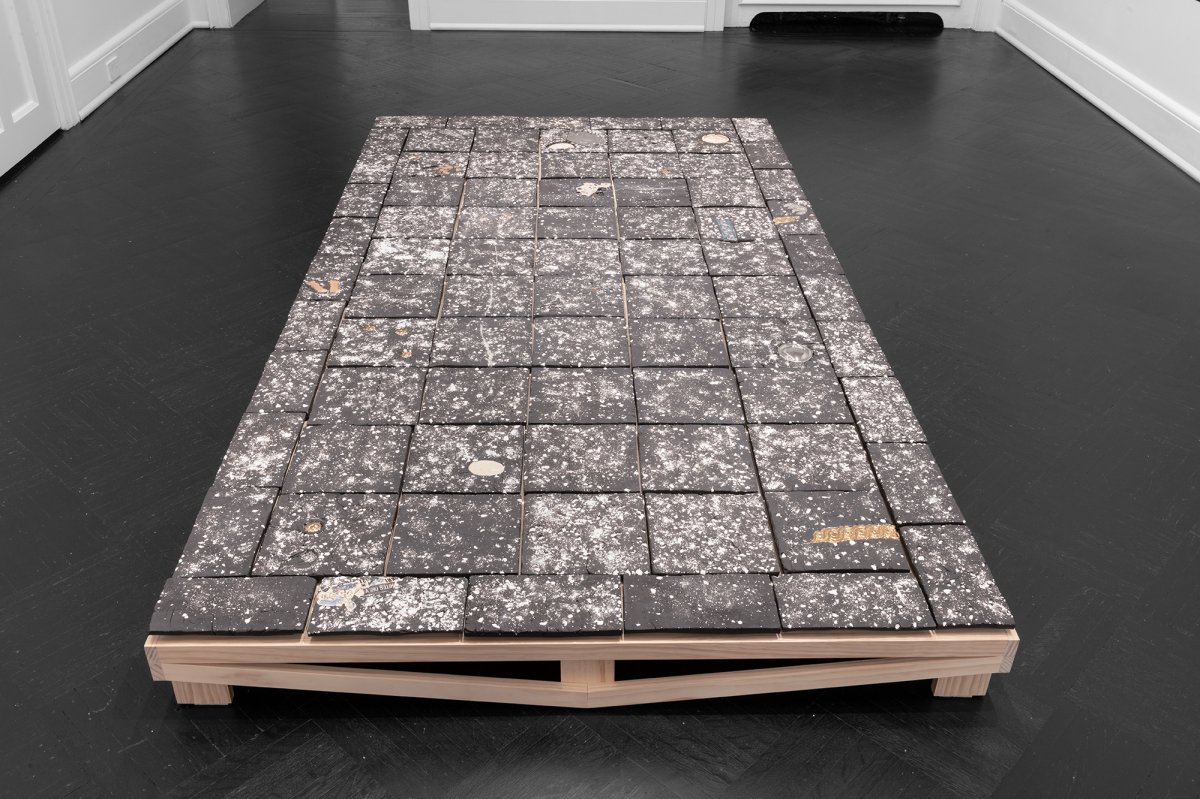 Kahlil Robert Irving
Dreams in the line and memories (/whipped), 2021 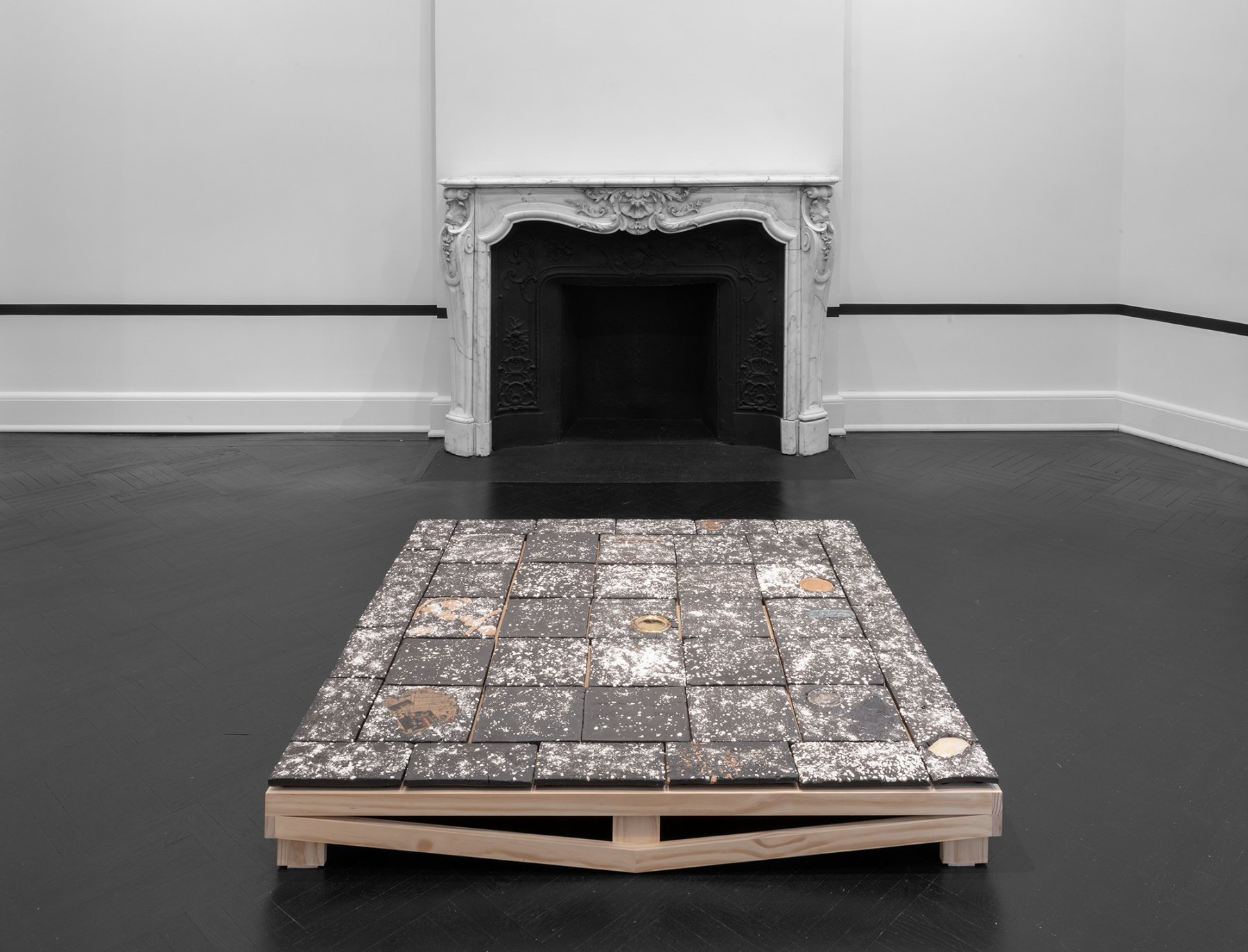 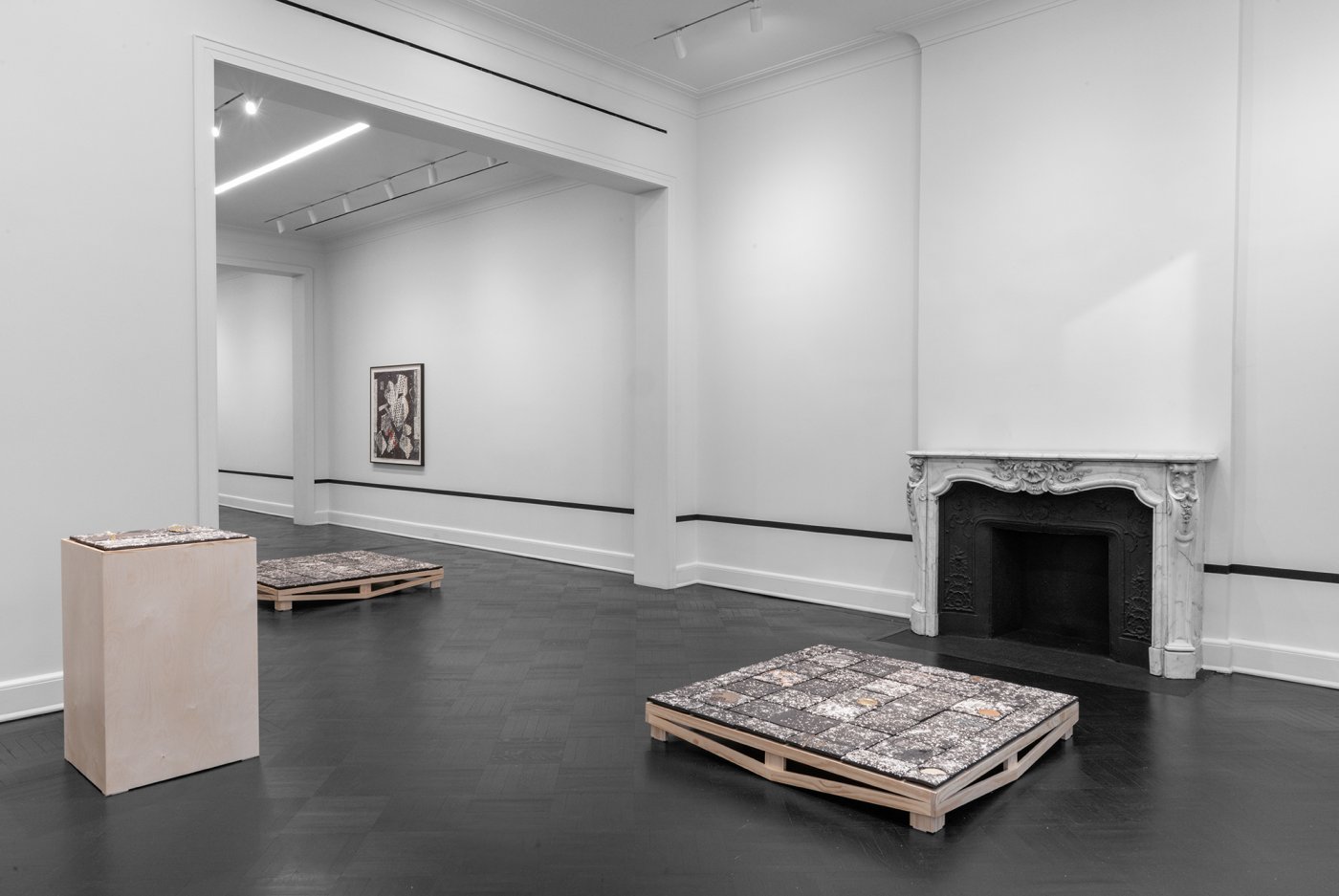 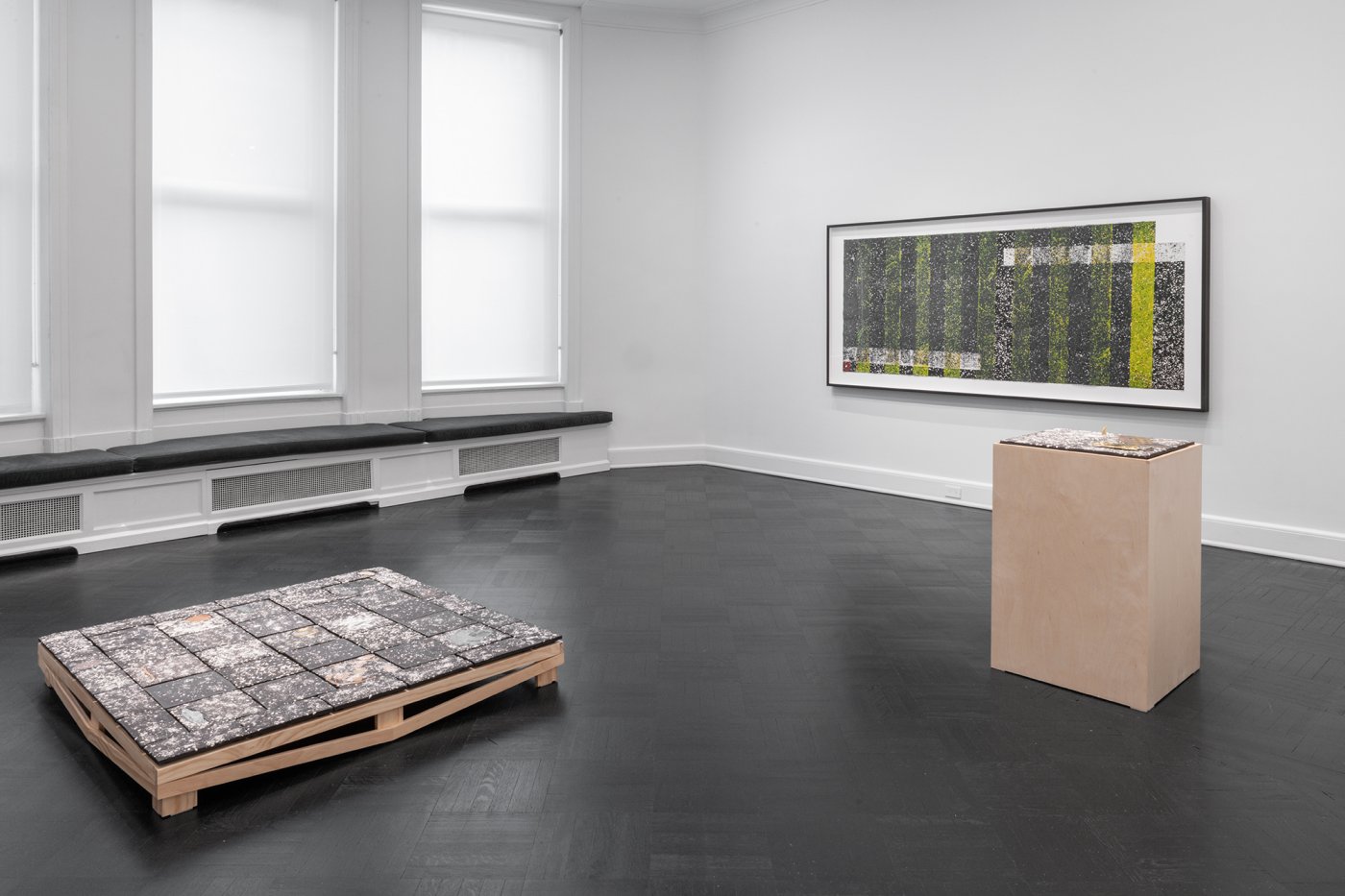 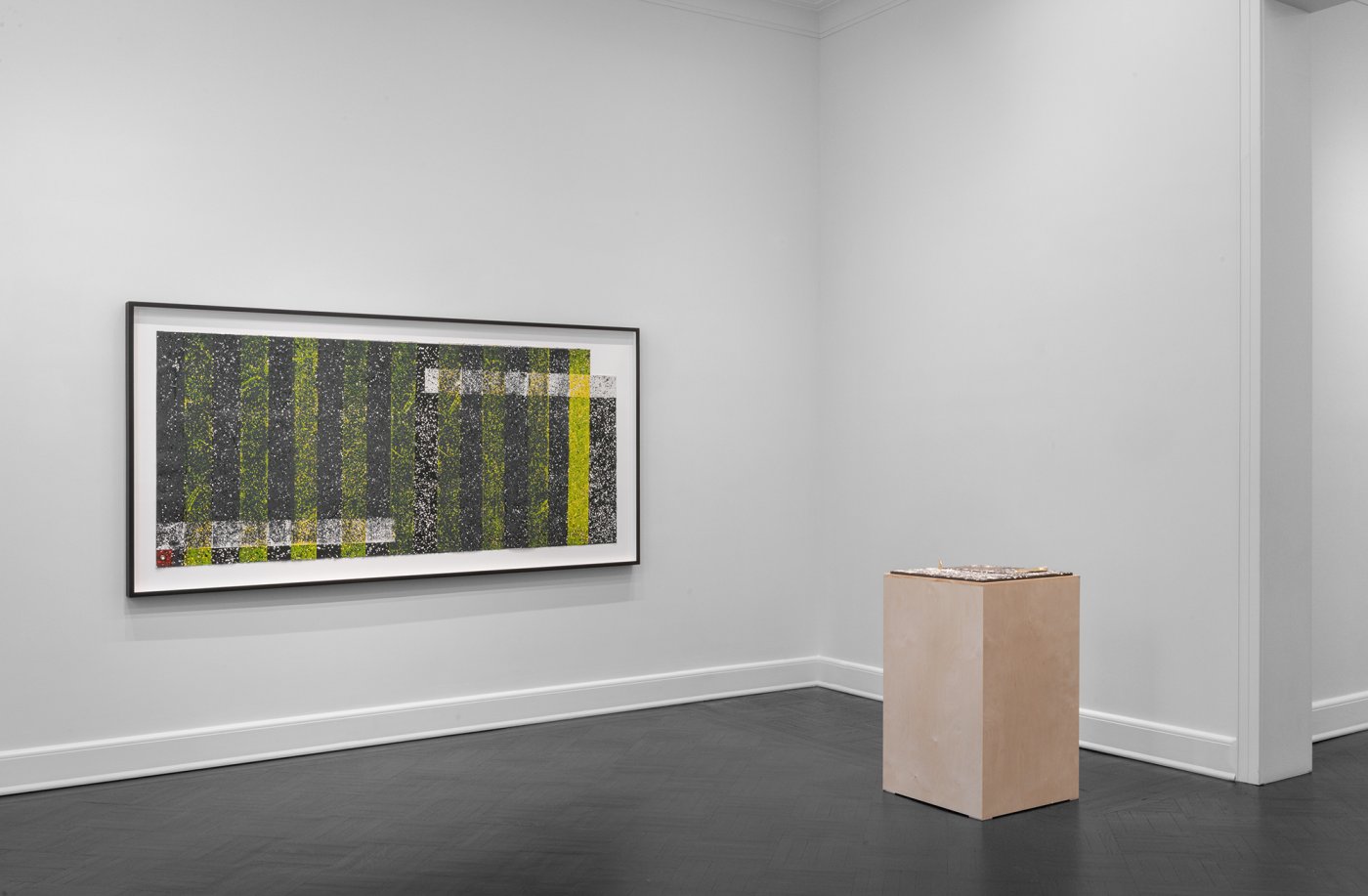 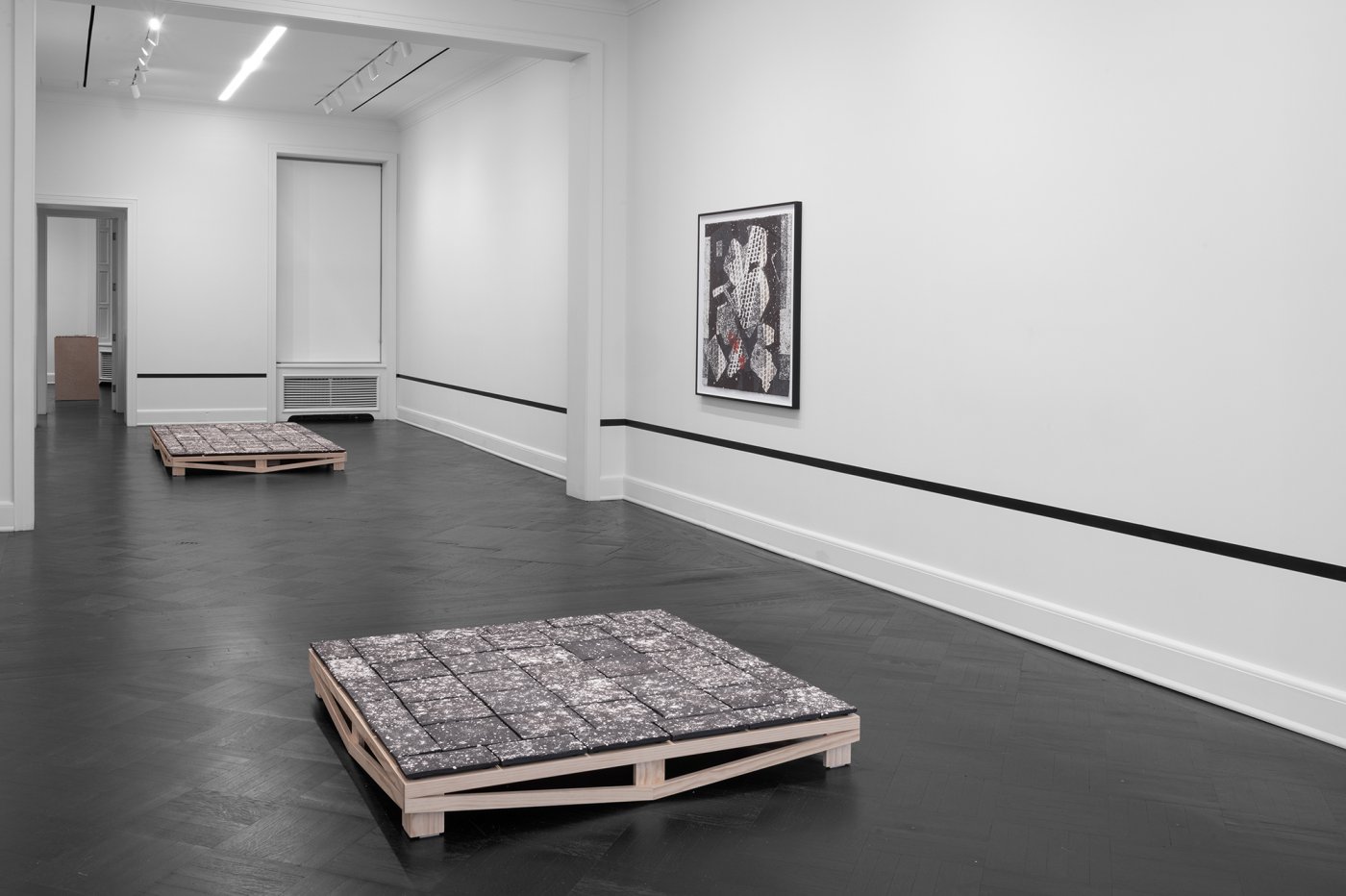 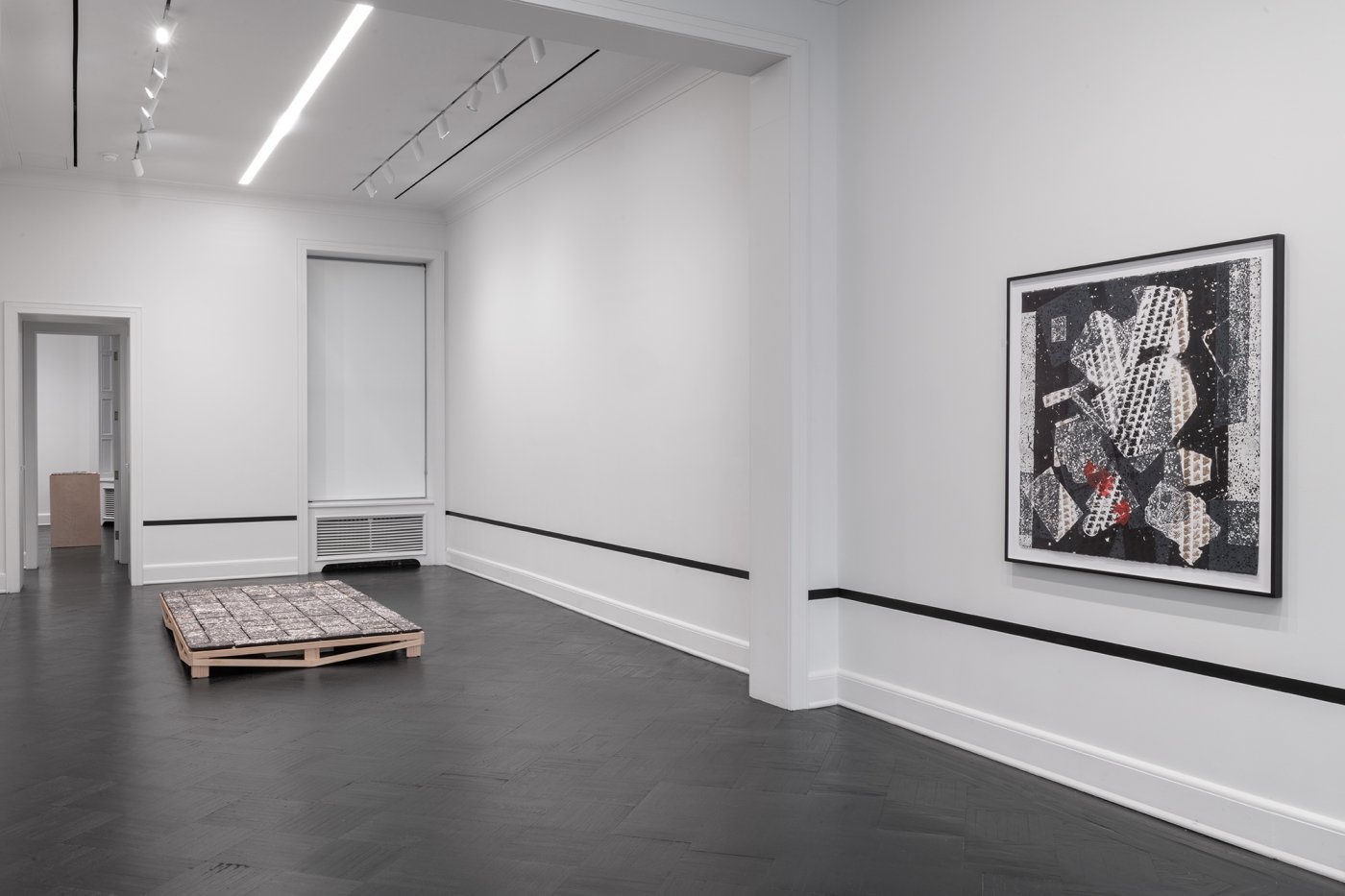 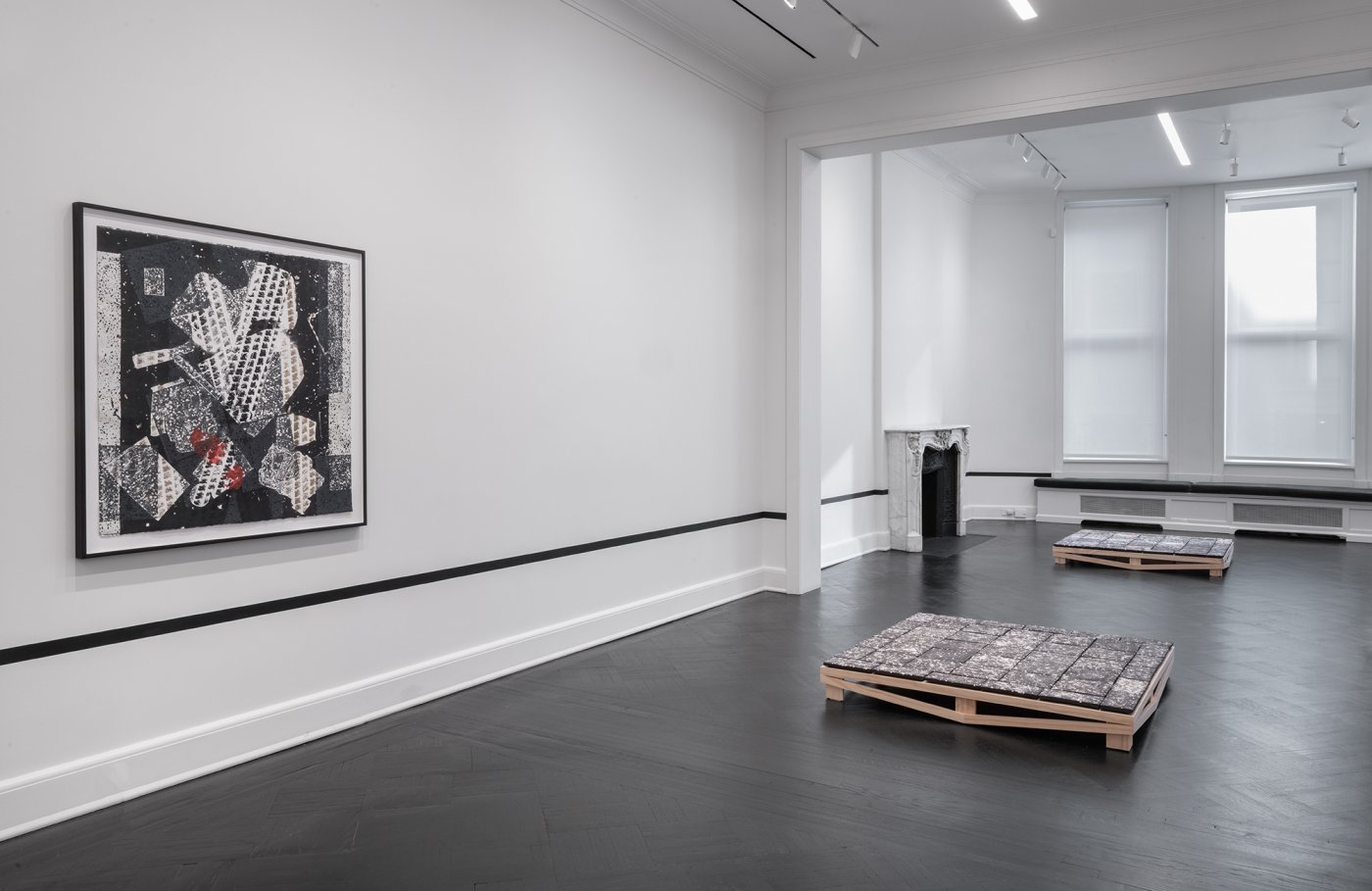 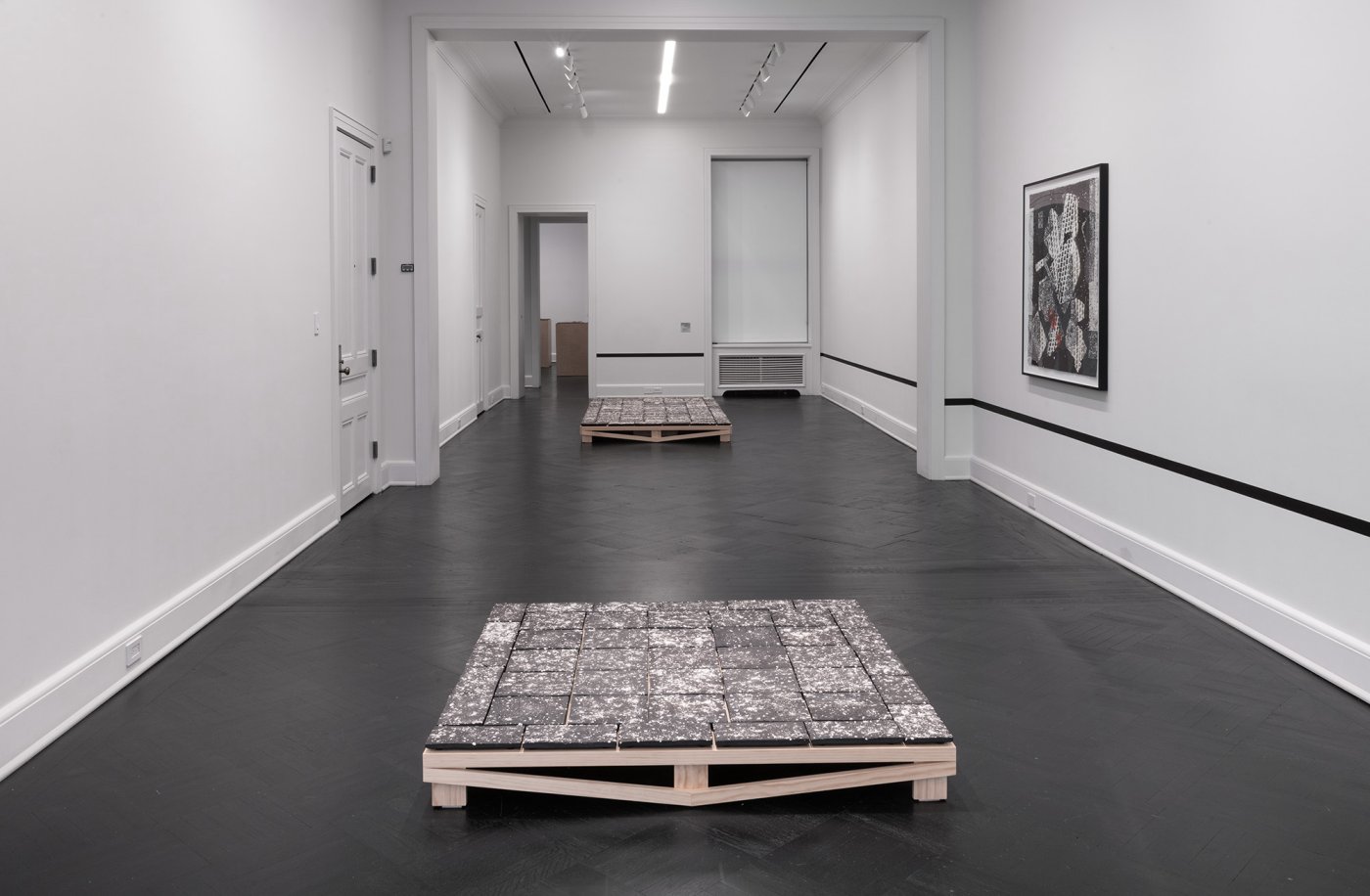 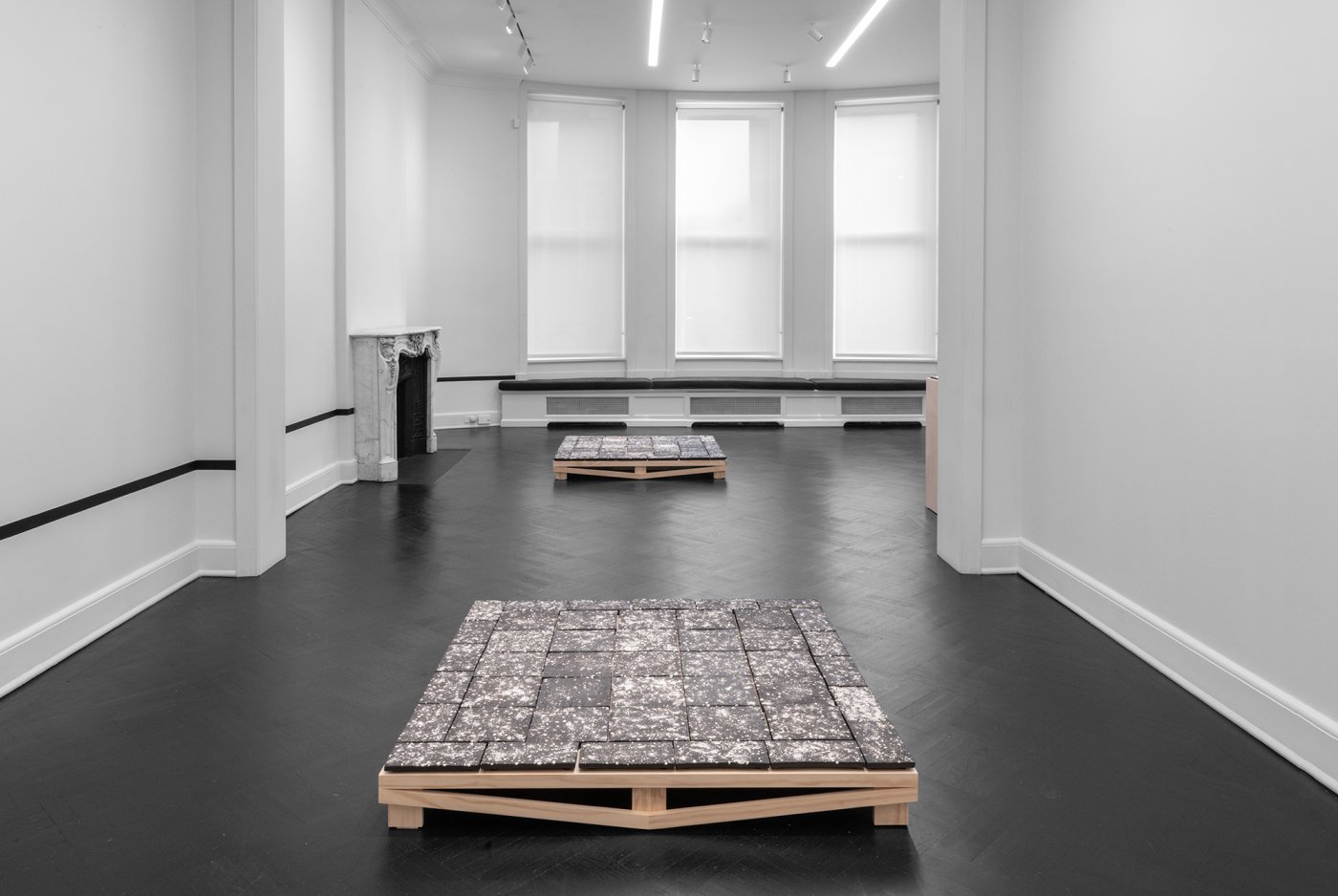 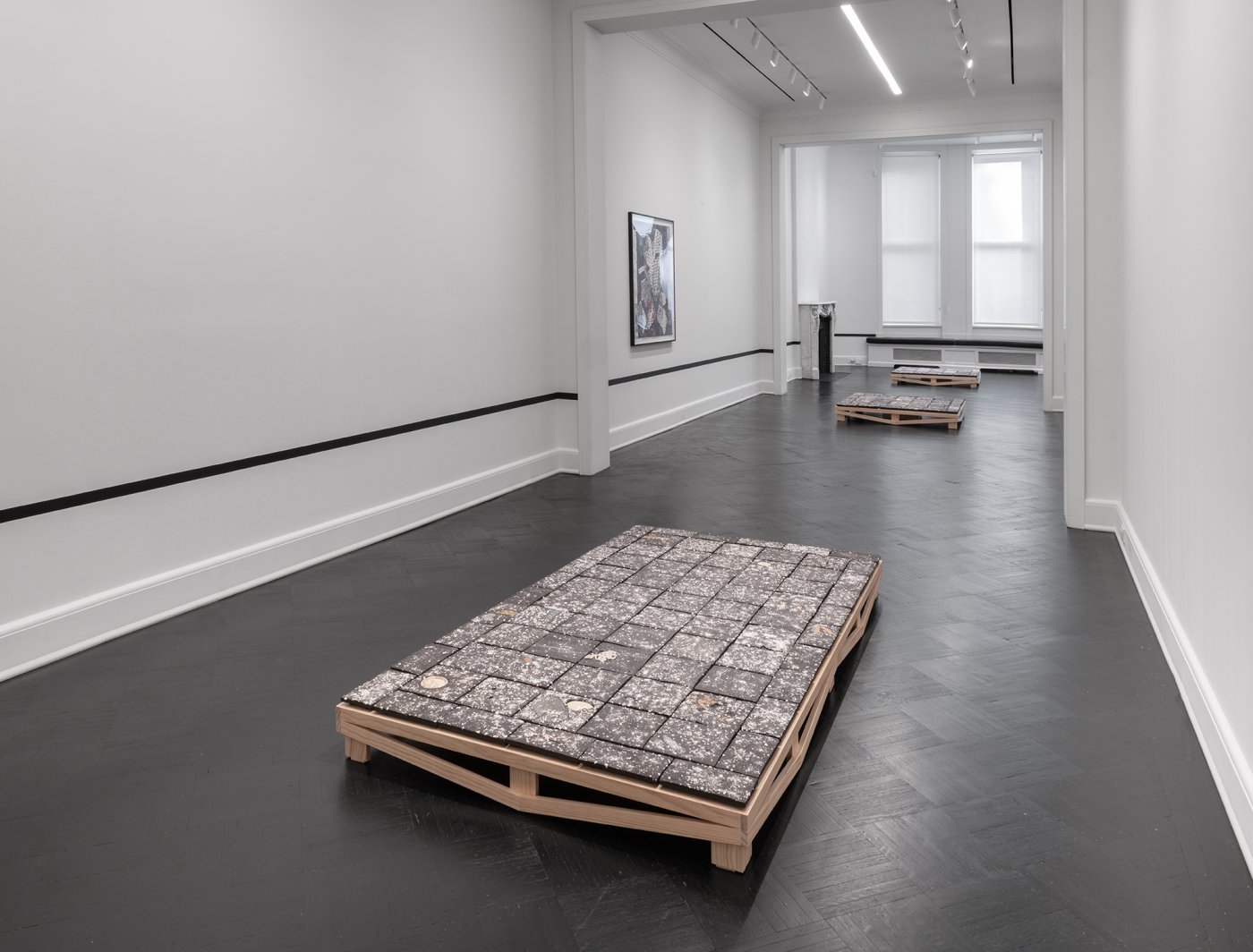 This is Irving’s first presentation with the gallery and follows his recent solo Projects exhibition at the Museum of Modern Art, which was organized in partnership with the Studio Museum in Harlem.

While Street Moments brings together the diverse range of media employed in the artist’s practice, the works are anchored in their common visual theme of the street surface. This is perhaps most apparent in the large floor sculpture made from hand-pressed stoneware tiles, whose mottled surfaces are meant to resemble asphalt. Although initially inspired by the mosaic floors of Hellenistic Antioch, Irving’s tile sculptures present a wholly contemporary topography integrated with enameled trompe l’oeil urban refuse: air fresheners, newspapers, cardboard, and the like. On the other end, Irving is also making replica antique decorative pottery.

In a continuation of the “street view” series, Irving presents a new sculpture from 2019-2022, one of his largest to date. It is covered in imagery of the ground and uses the three dimensional form to process digital media sources and the material world simultaneously. Taking an interest in concrete poetry, the artist uses text and image, with form, to further complicate, mask, and problematize the course and function of how ceramics may be used. Using one of the oldest technologies, ceramics becomes a crucible for ideas and a placeholder for so much content beyond the material itself, which plays into the industrial possibilities of it as well for Irving. Using overglaze enamel in photograph transfers and solid color material allows for a painterly approach to be present as well as a photographic one.

Using diverse modes of production, Irving has lately spent much time carefully pondering the color Black and how it manifests across the pressures of contemporary life in the post-industrial Midwest. Walking and driving on the street asphalt has become recurring motifs used by the artist. “Replicating asphalt in image and material is a marker of continuous urbanity that stretches into rural and inner city spaces,” says Irving. “It is a man-made through-line between different communities and information.”

In an interview conducted during his first solo institutional exhibition at Wesleyan University’s Center for the Arts in 2018, Irving spoke about his “street views” series:

“Anti-Blackness is everywhere and manifests itself in slight and complicated ways, similar to the overlooked surface of the street. The discarded objects that find themselves on, within, or beneath the street’s surface are ignored by some, while others don’t have the option to ignore. In some neighborhoods these things are cleaned up, and in other neighborhoods they are left to add up. This is an aspect of societal oppression and a vestige of segregation still in effect today. The built world we know is reinforced with camouflaged racism and discrimination, commonly understood to be mundane and a part of everyday life.”

Many of the issues that Irving addresses in his work lie in the vestiges of the trajectory of colonialism into our current life experiences. Making replicas of historical objects smashed or compressed and placed near imagery of social response or news articles speaking of violence, or a quirky meme, draws a connection between historical hierarchies and trade to the current moment of dissemination of what people believe may be important or needed in order to survive.

The works presented in Street Moments are objects telling stories that seek to illuminate that there is importance in items or issues that are buried not too deep in the ground that we walk on. “There are memories lost in asphalt but that reality is also reflected in the desire we place in the stars above,” Irving says. The artist is drawn to this metaphor connecting the asphalt-sky reflection because the sky is endless and out of our control and the ground is something that is constantly being renegotiated. In that connection there is a new reality that can be practiced. At this moment these works are a continuation of the world building Irving has been doing over the last several years of his practice.

Kahlil Robert Irving (b. 1992, San Diego, CA) is an artist currently living and working in St. Louis, Missouri. He received his MFA at the Sam Fox School of Design and Visual Art at the Washington University in St. Louis and received his BFA in Art History and Ceramics/Sculpture from the Kansas City Art Institute. His work has been exhibited at the Nerman Museum of Contemporary Art, Overland Park; the Arizona State University Art Museum, Phoenix; and, the Rhode Island School of Design Museum, Providence, among others.

Recently, Irving presented Projects: Kahlil Robert Irving at the Museum of Modern Art in New York (2021-2022), which was organized in partnership with the Studio Museum in Harlem. Irving was also included in the 2021 New Museum Triennial: Soft Water, Hard Stone, co-curated by Jamillah James and Margot Norton. Recent group exhibitions also include What is Left Unspoken at the High Museum of Art, Atlanta; and Working Thought at the Carnegie Museum of Art, Pittsburgh.

Irving has been awarded the Louis Comfort Tiffany Foundation Grant (2019) and the Joan Mitchell Foundation Grant (2020). In 2018, Irving’s first solo institutional exhibition took place at Wesleyan University’s Center for the Arts in Middleton. Currently, the artist has on view a semi-permanent large-scale commission in the lobby of the Contemporary Art Center in Cincinnati. In 2023, the artist will have a solo exhibition at the Walker Art Center in Minneapolis.

The artist’s work can be found in the permanent collections of the Museum of Modern Art, New York; Brooklyn Museum, New York; the Carnegie Museum of Art, Pittsburgh; the Nerman Museum of Contemporary Art, Overland Park; the Rhode Island School of Design Museum, Providence; the Tang Teaching Museum and Art Gallery, Sarasota Springs; and, the Whitney Museum.