Lévy Gorvy presents its debut exhibition of Jutta Koether. Spanning all three floors of the gallery’s landmark building at 909 Madison Avenue, the exhibition features new paintings alongside a selection of key canvases from the early 1980s to 1990. 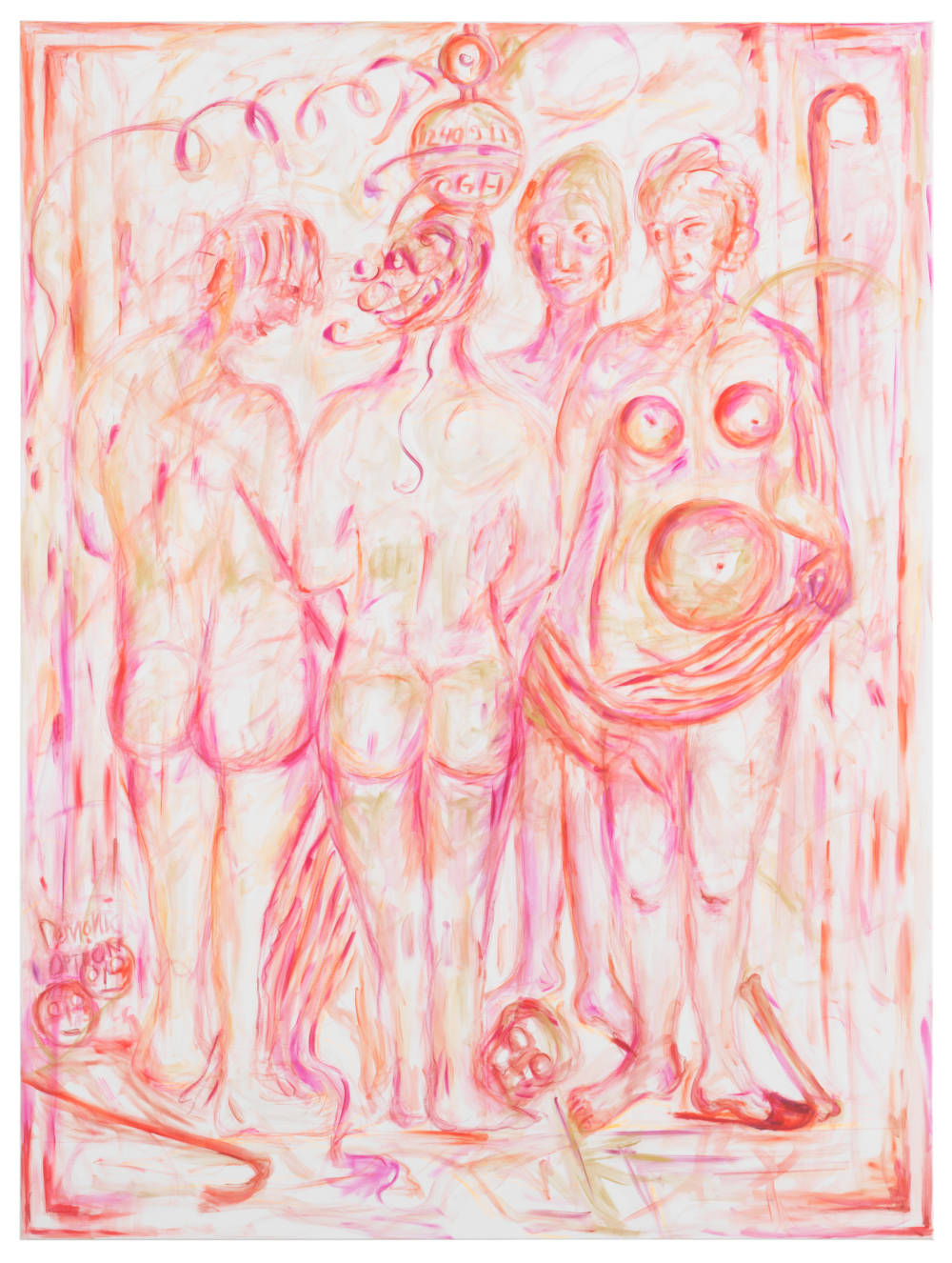 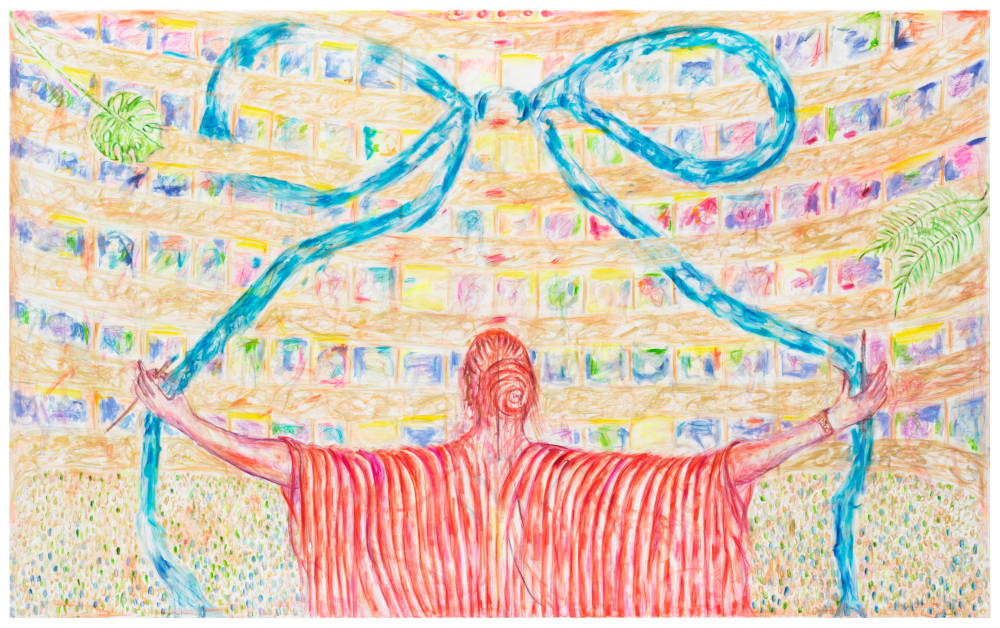 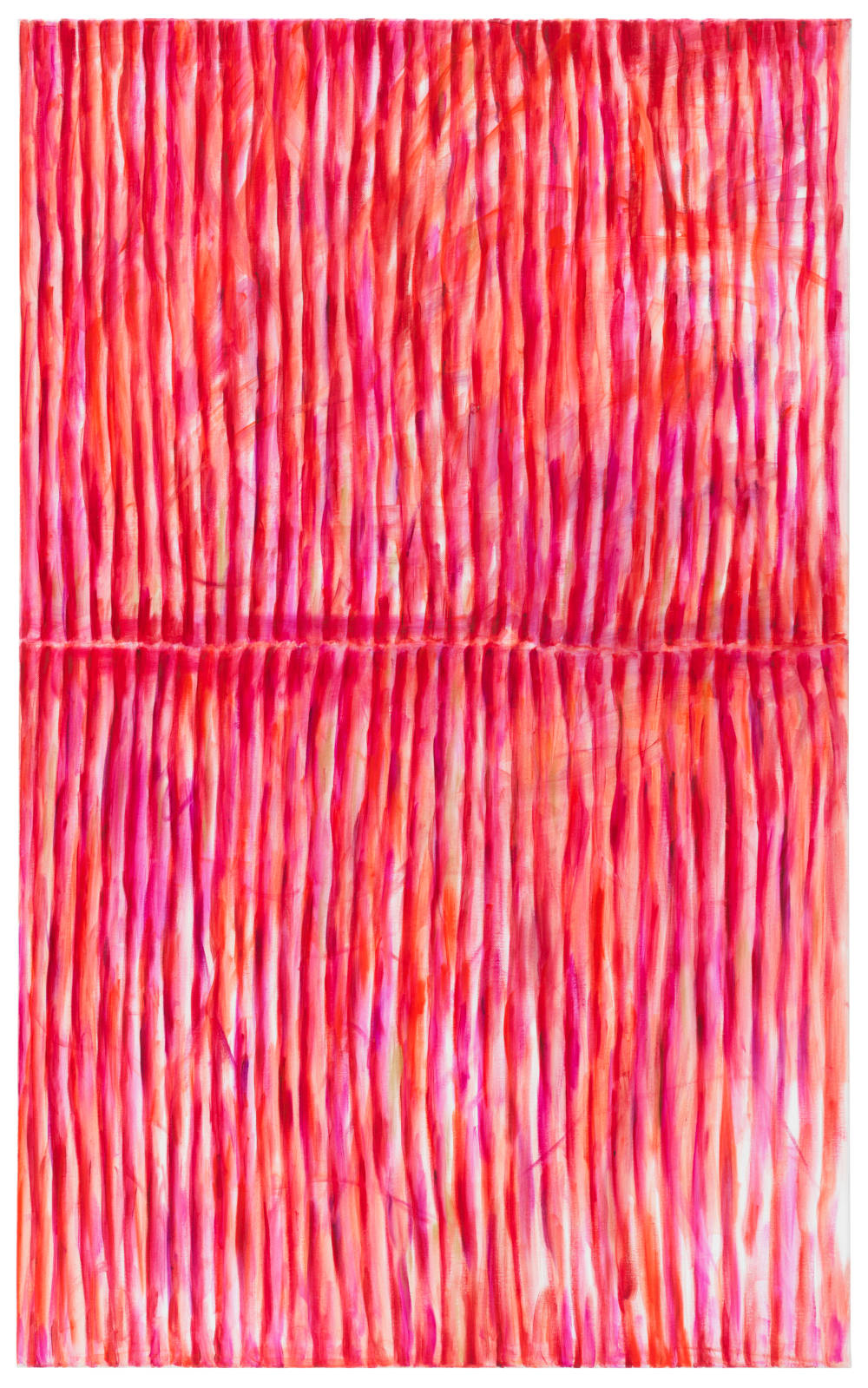 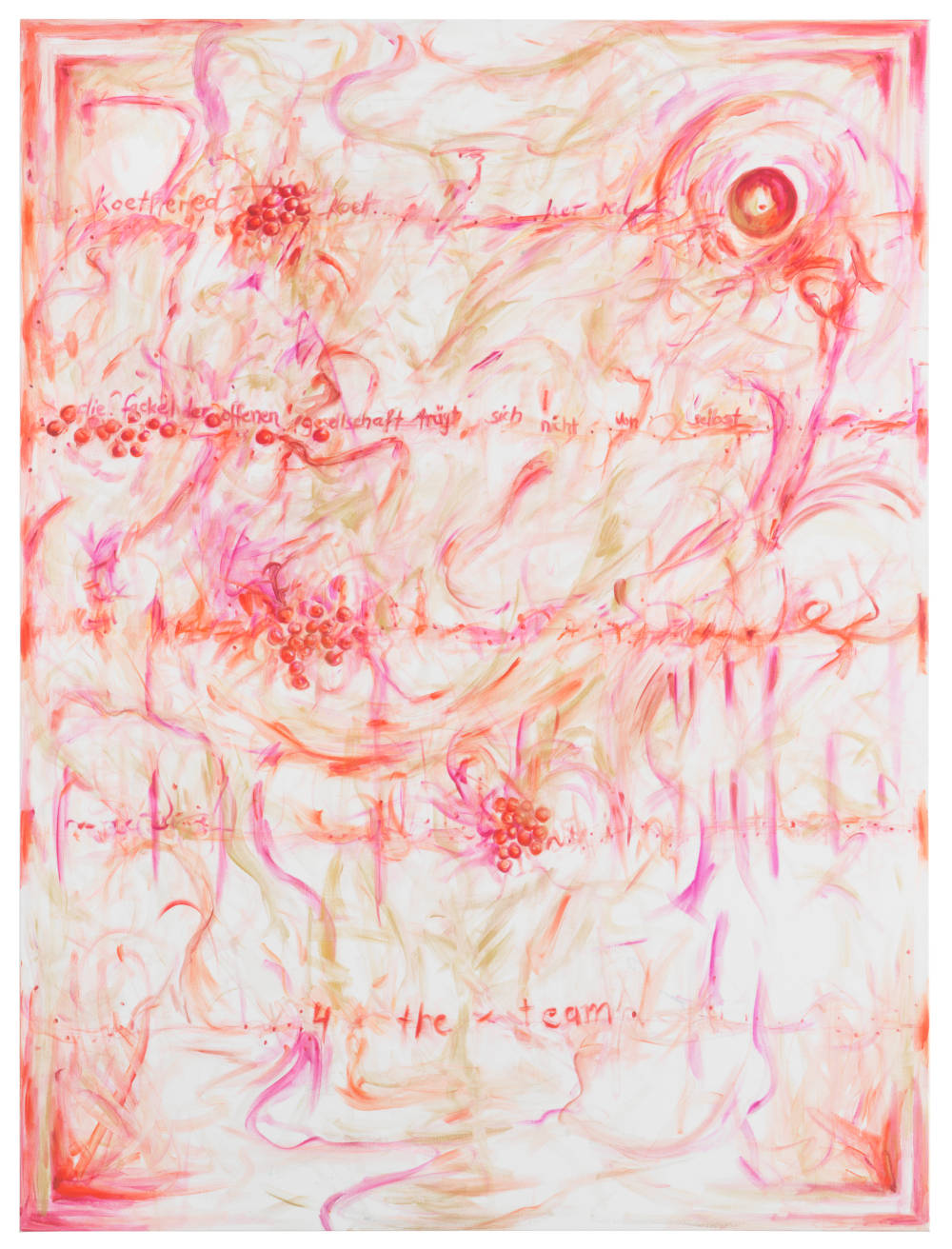 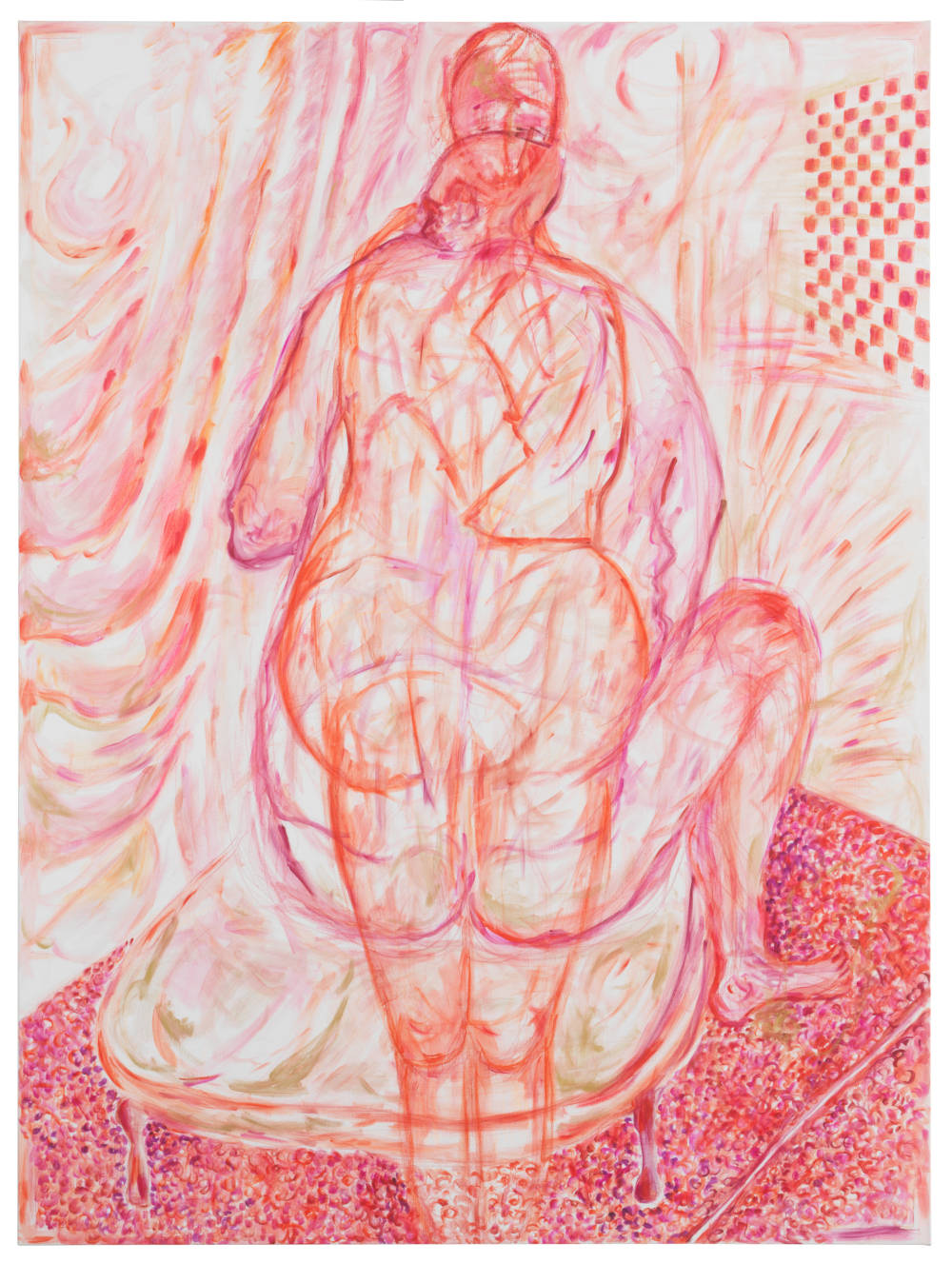 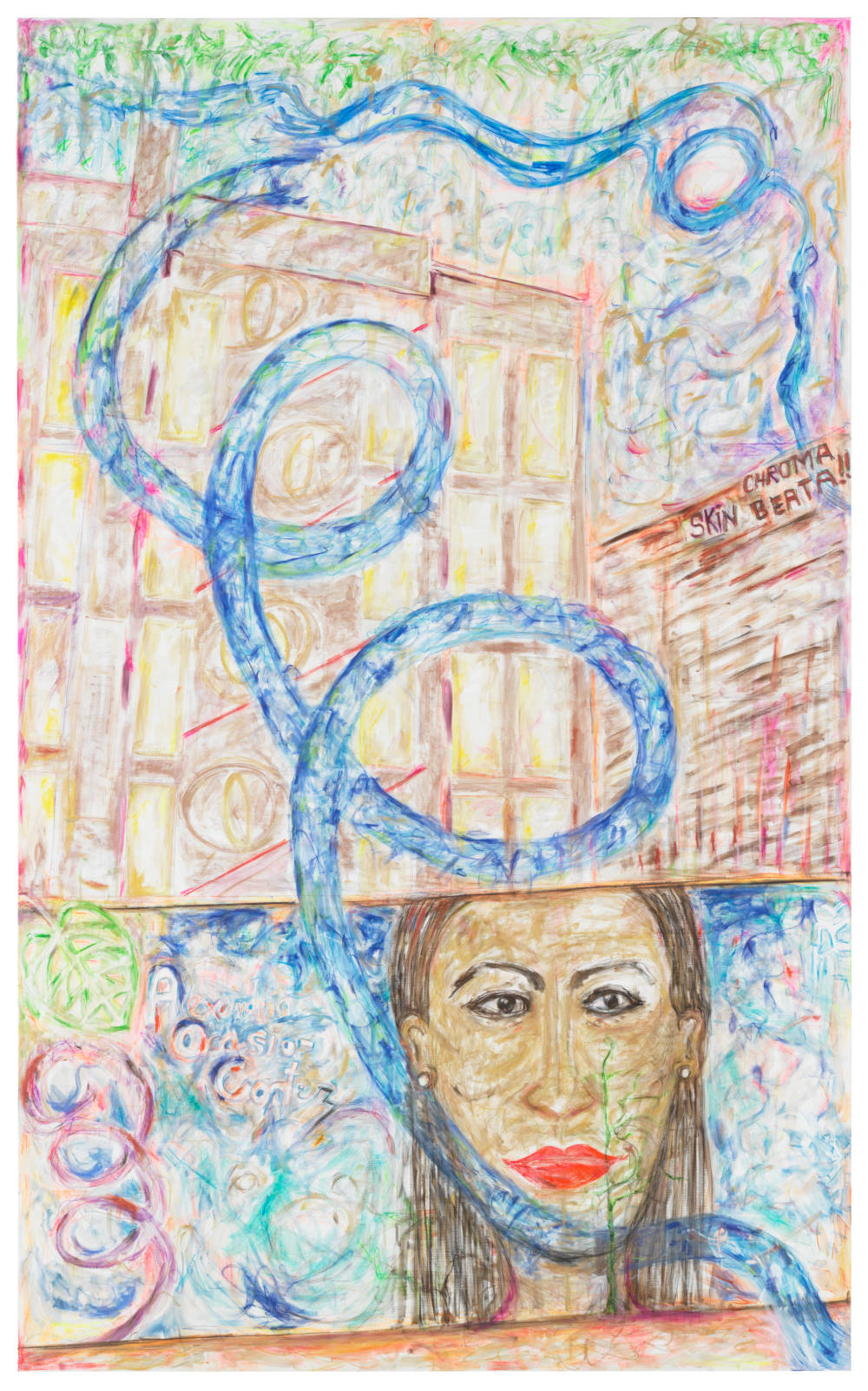 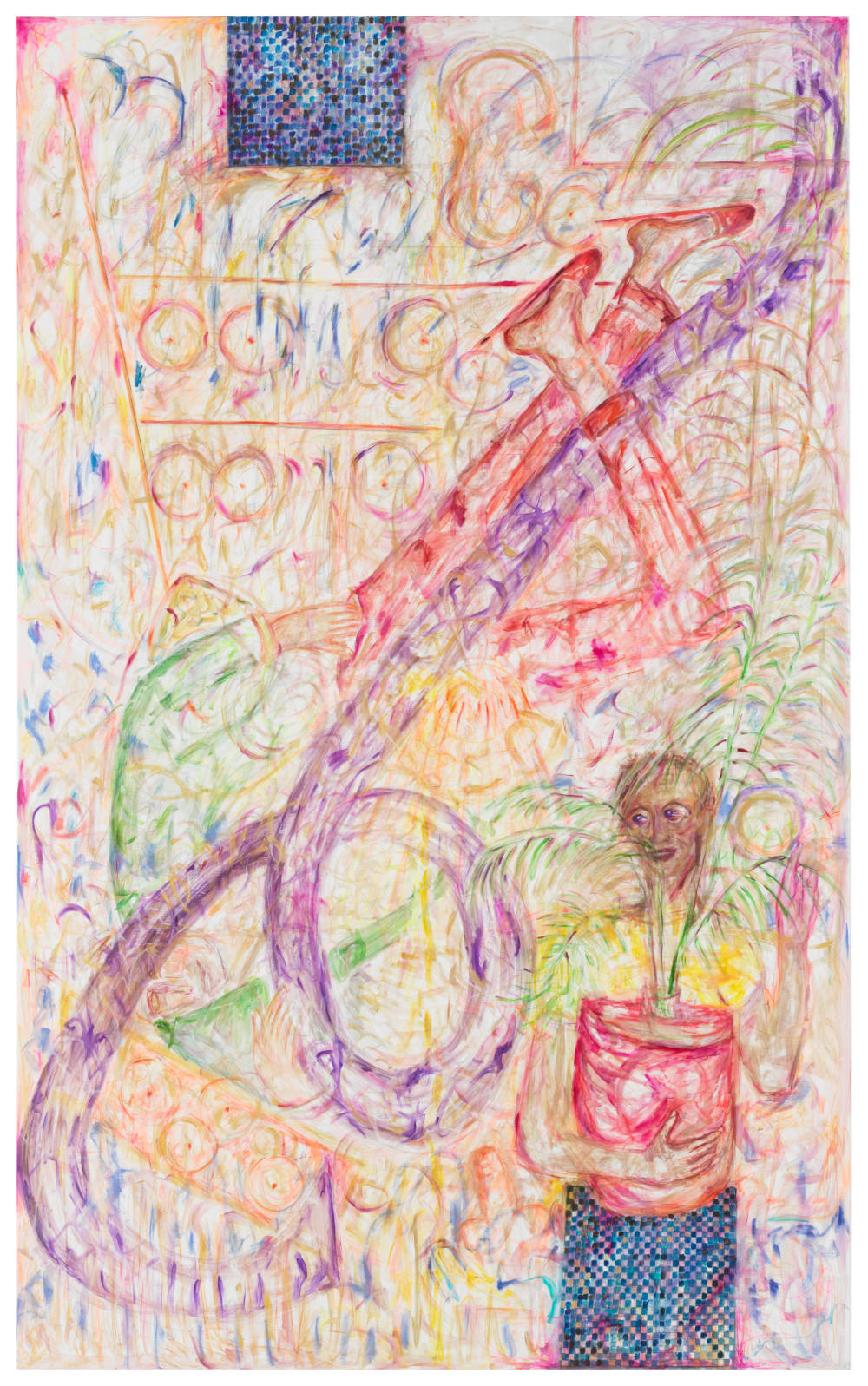 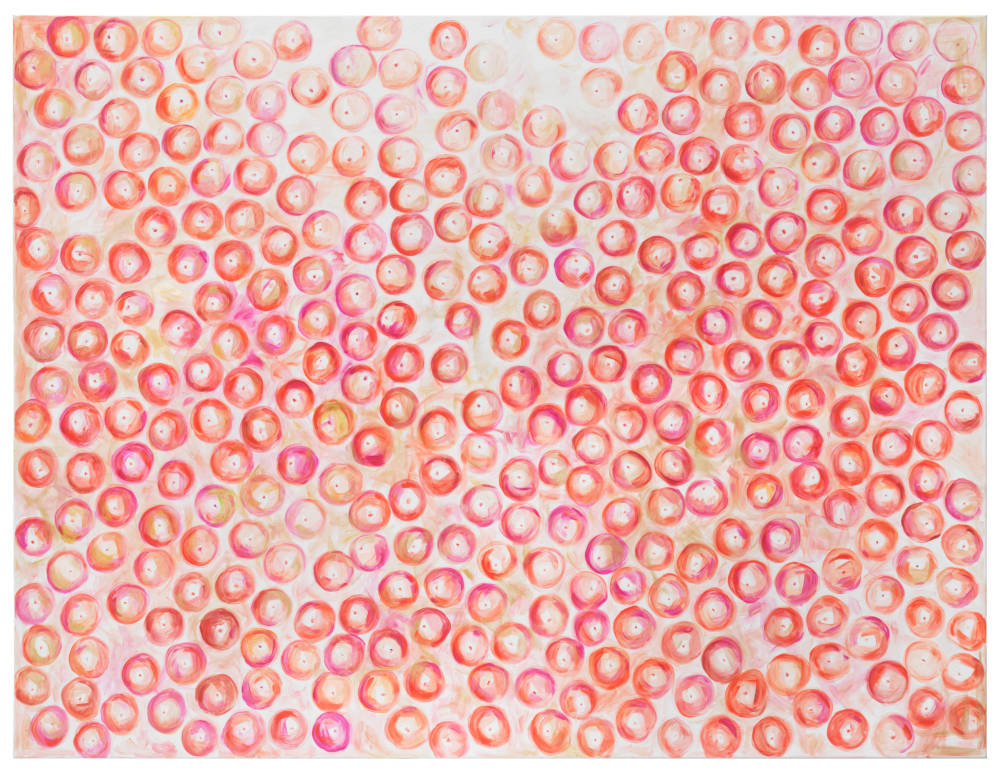 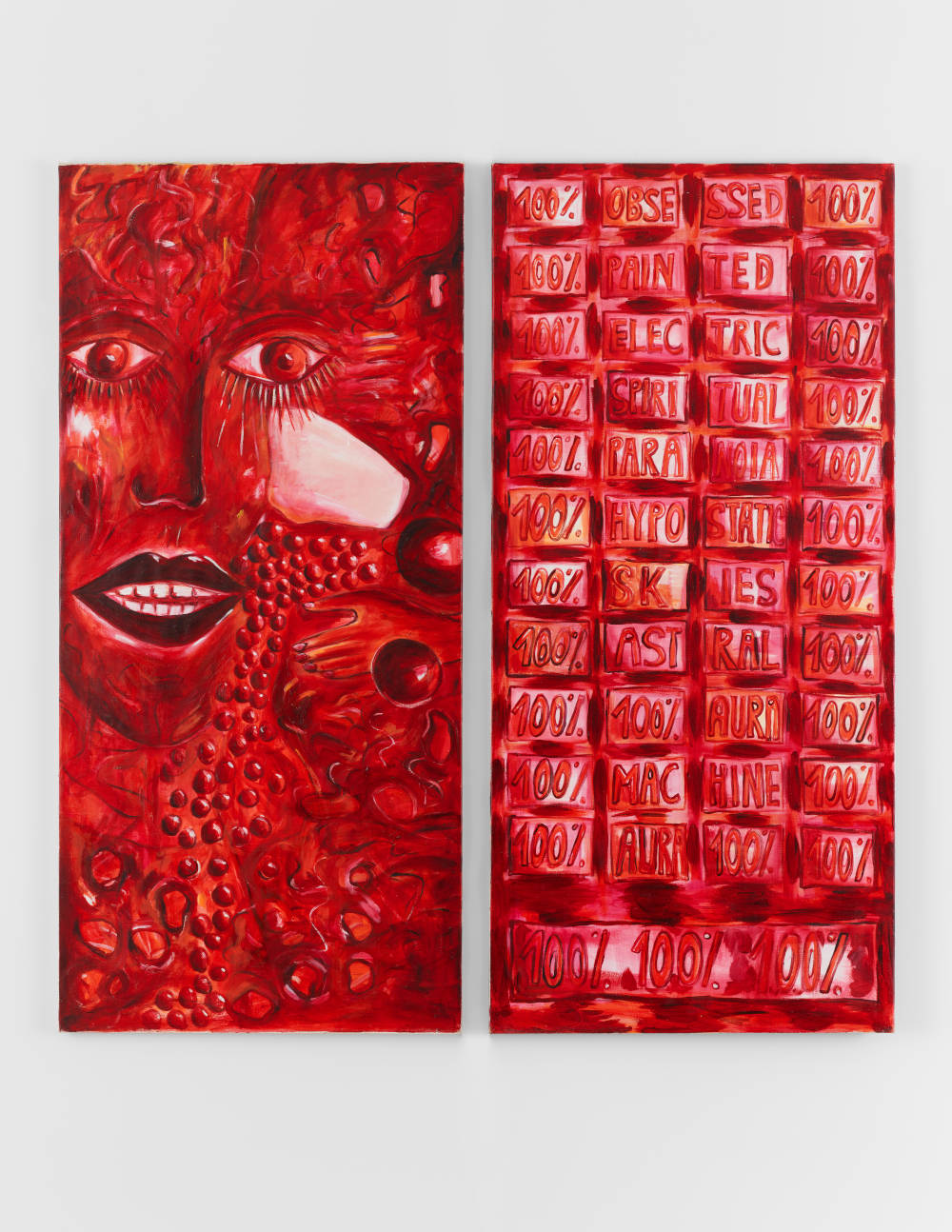 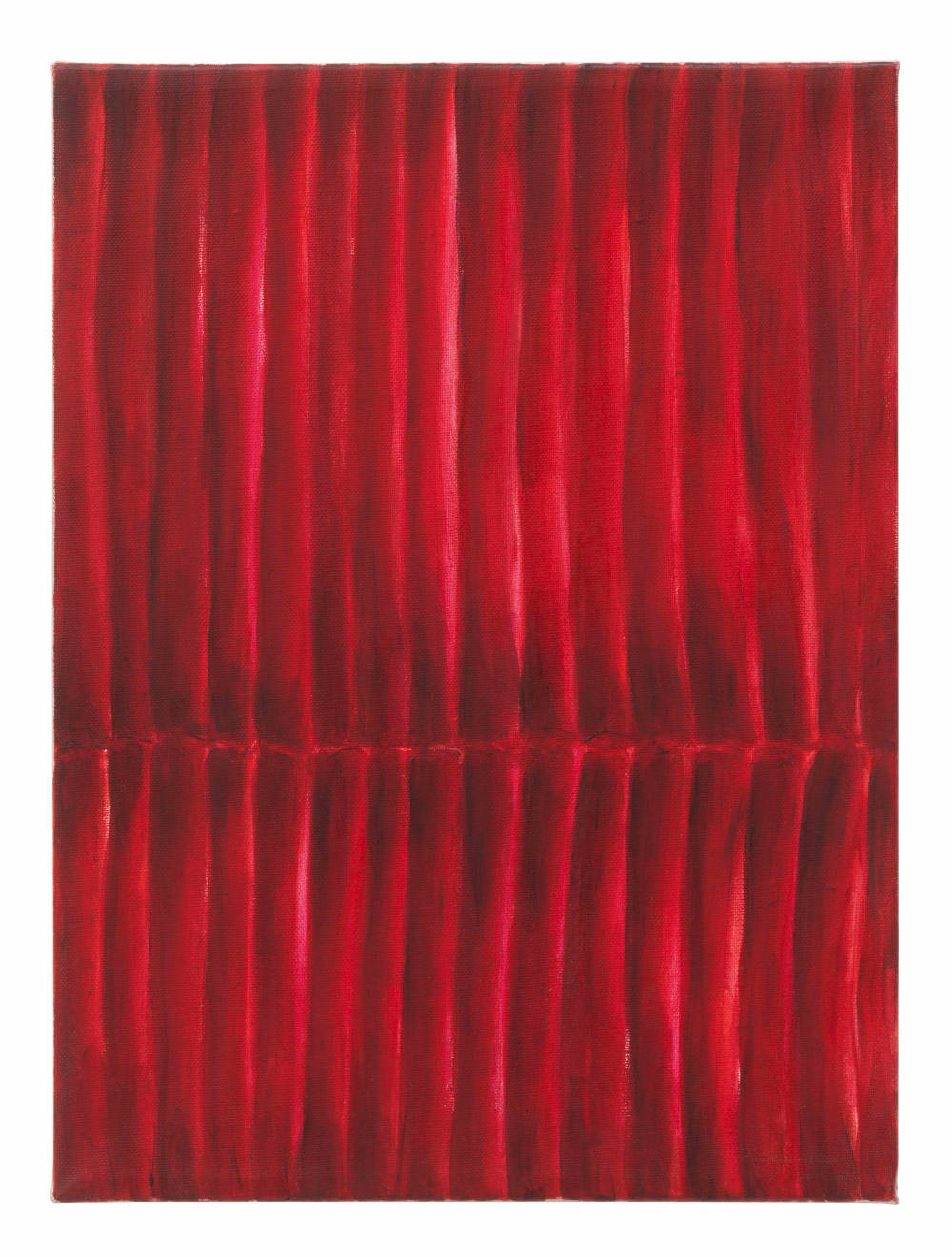 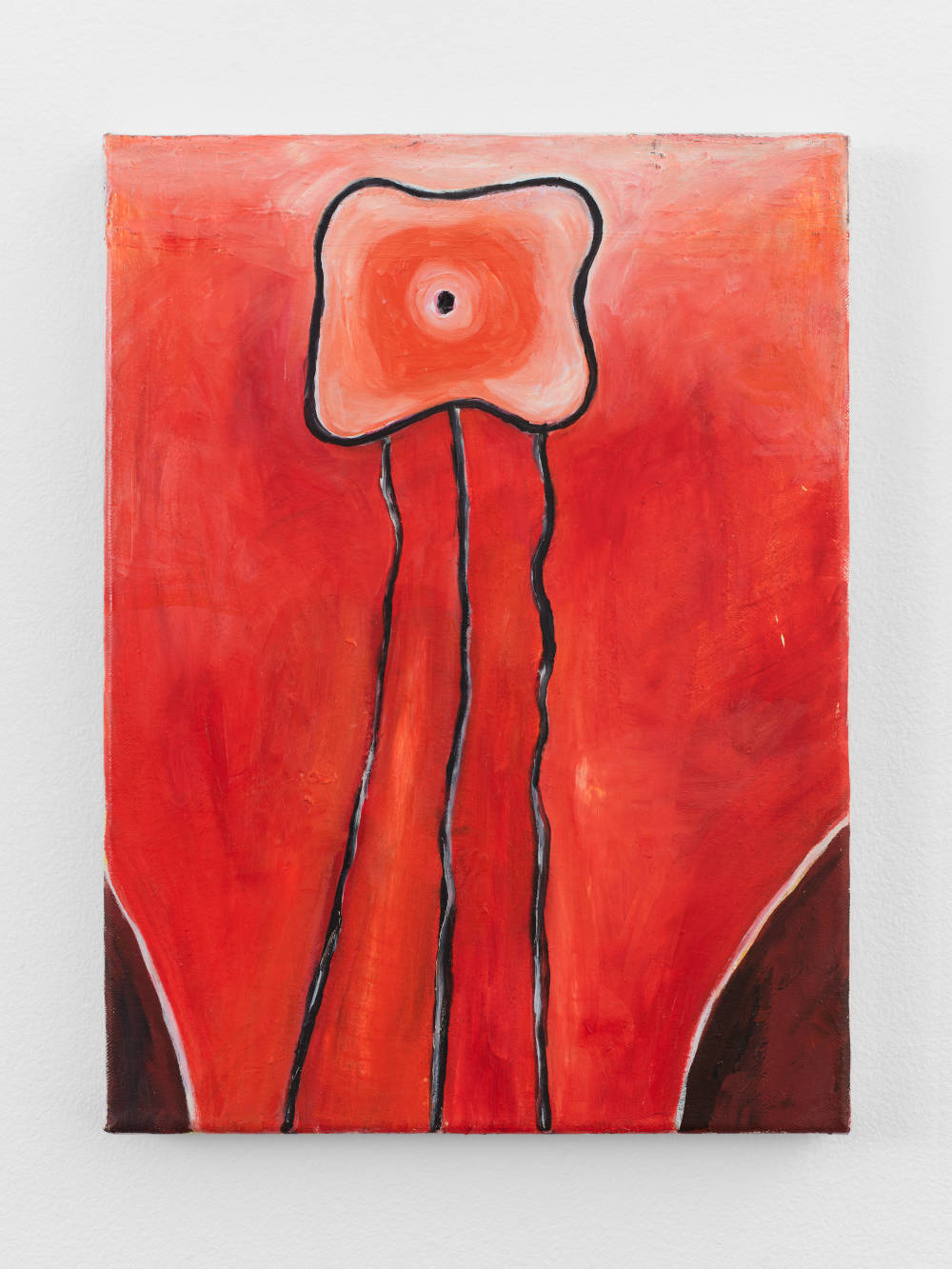 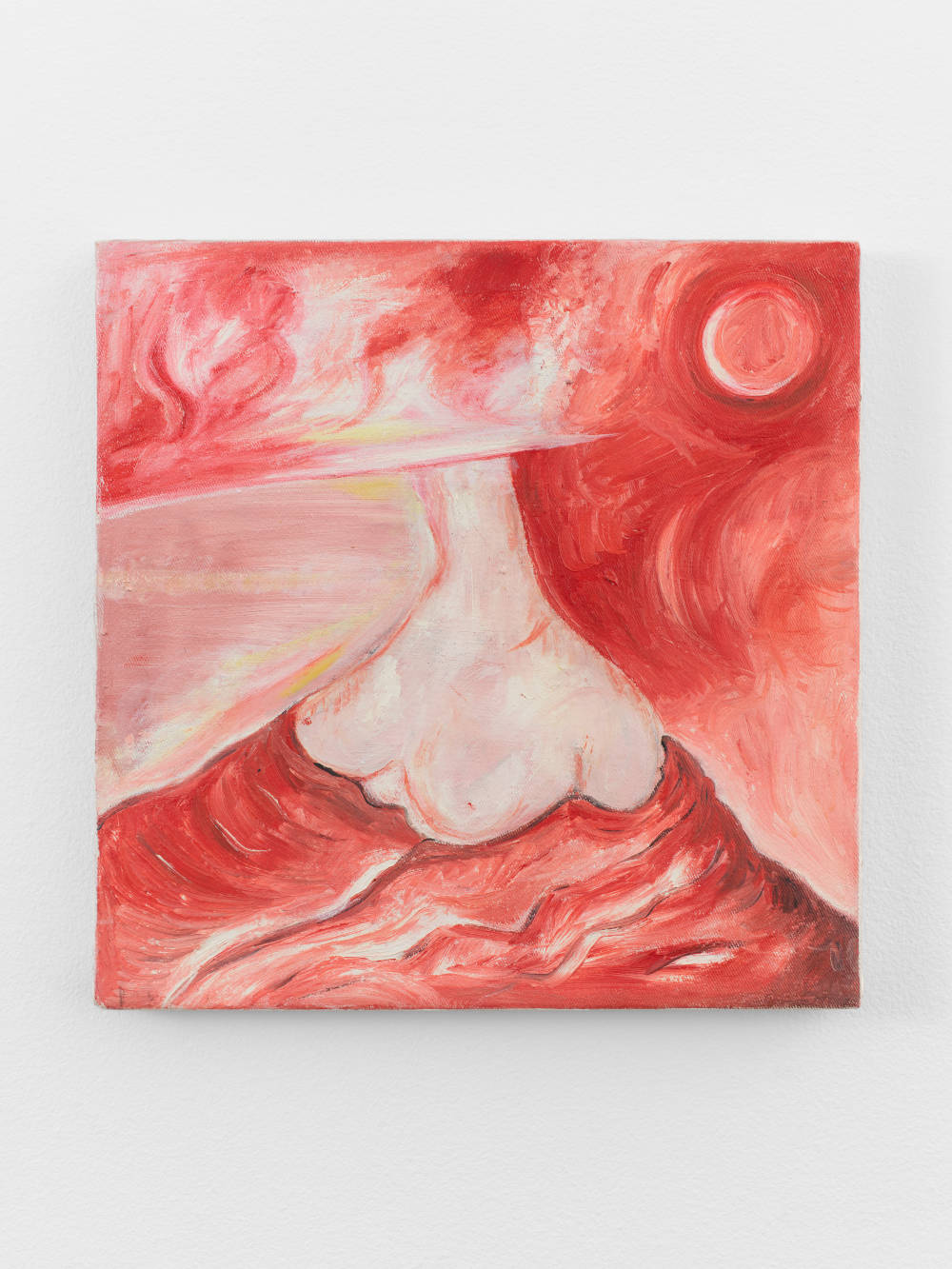 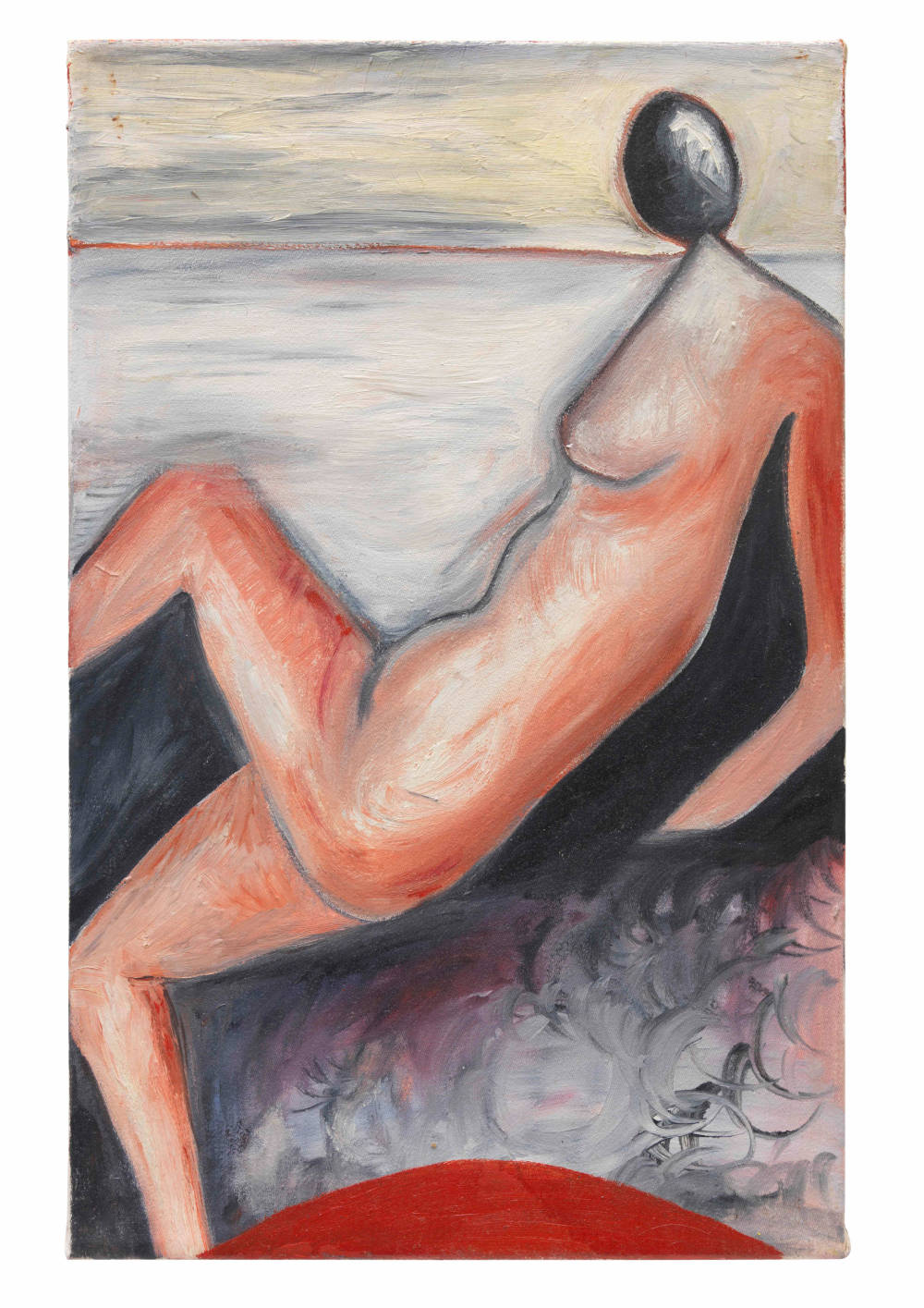 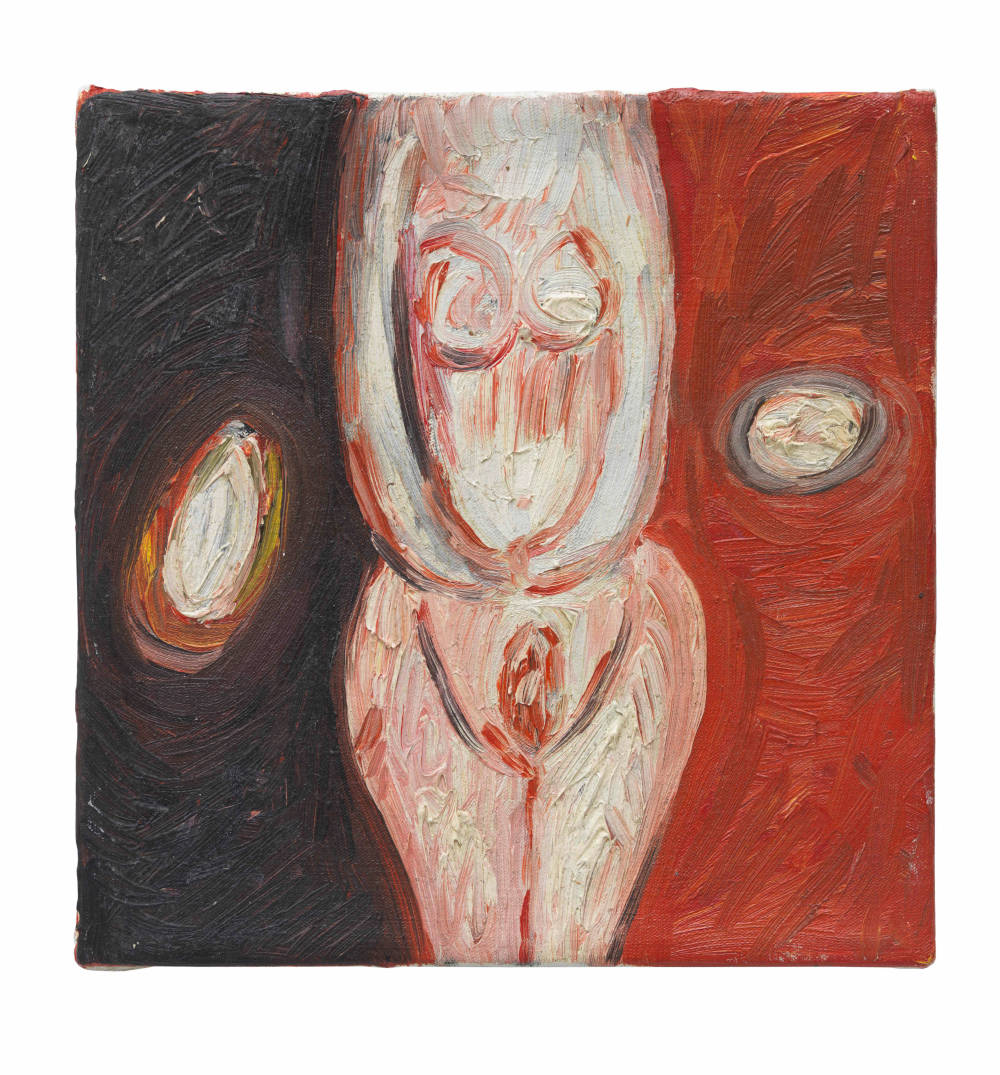 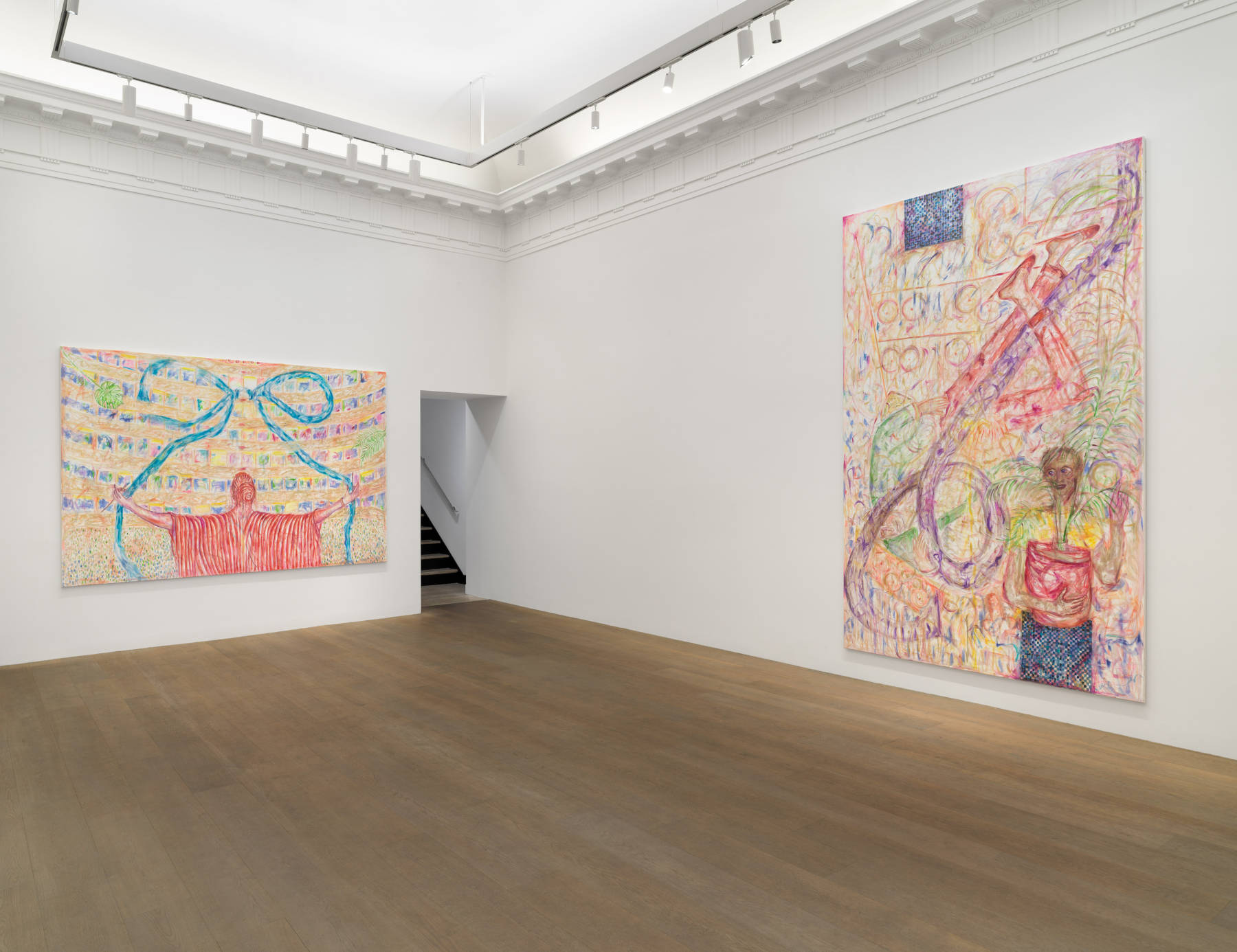 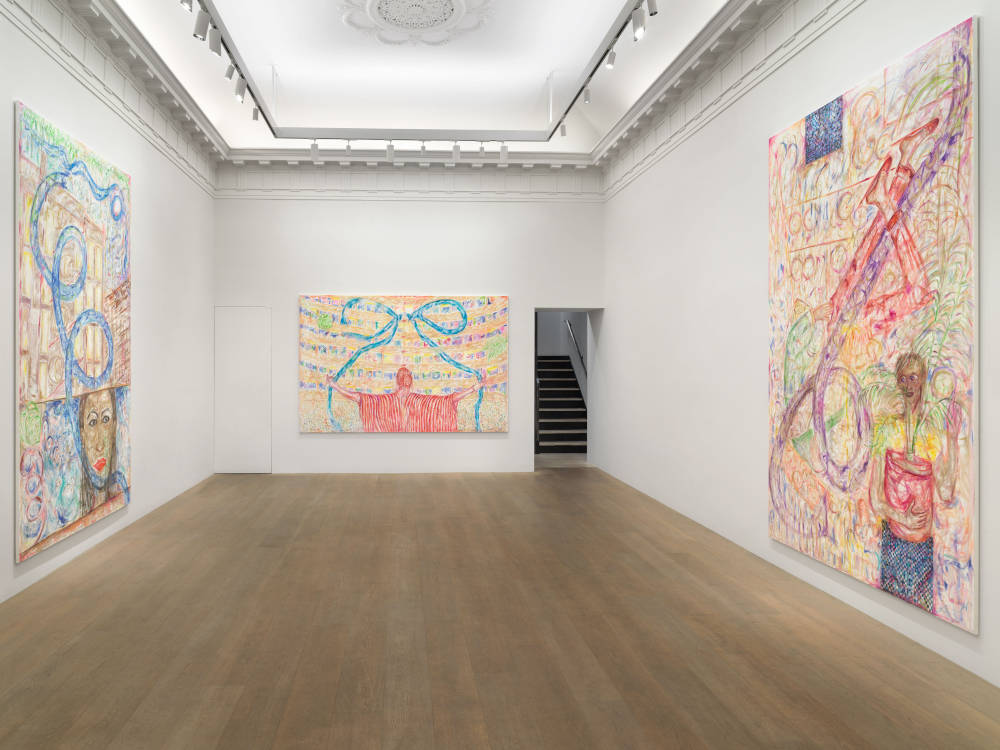 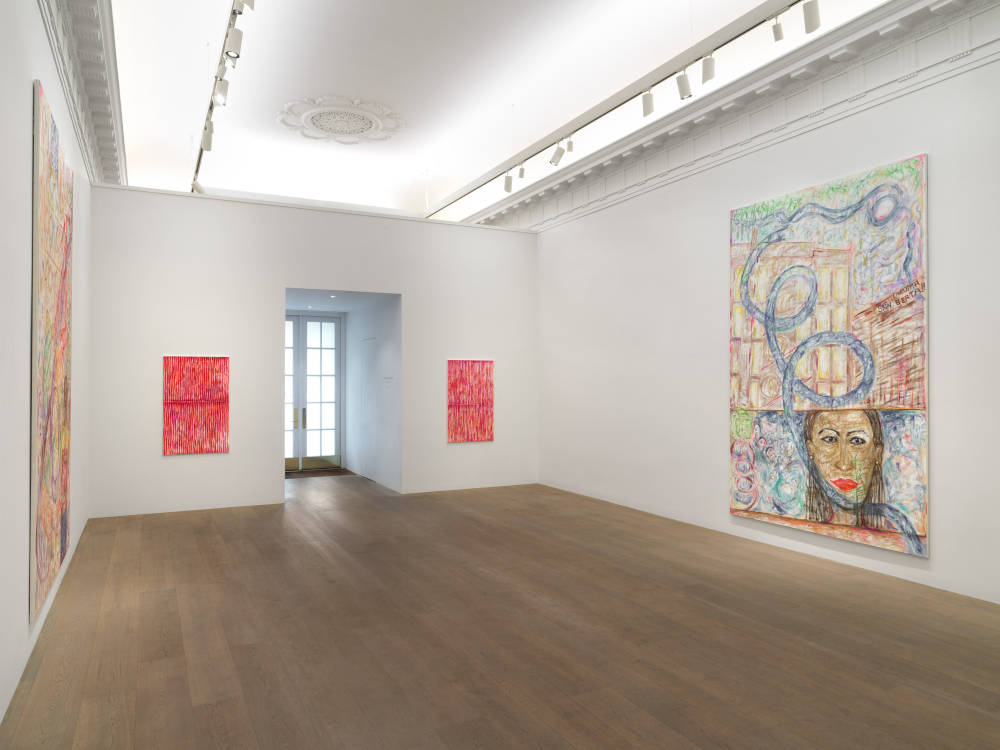 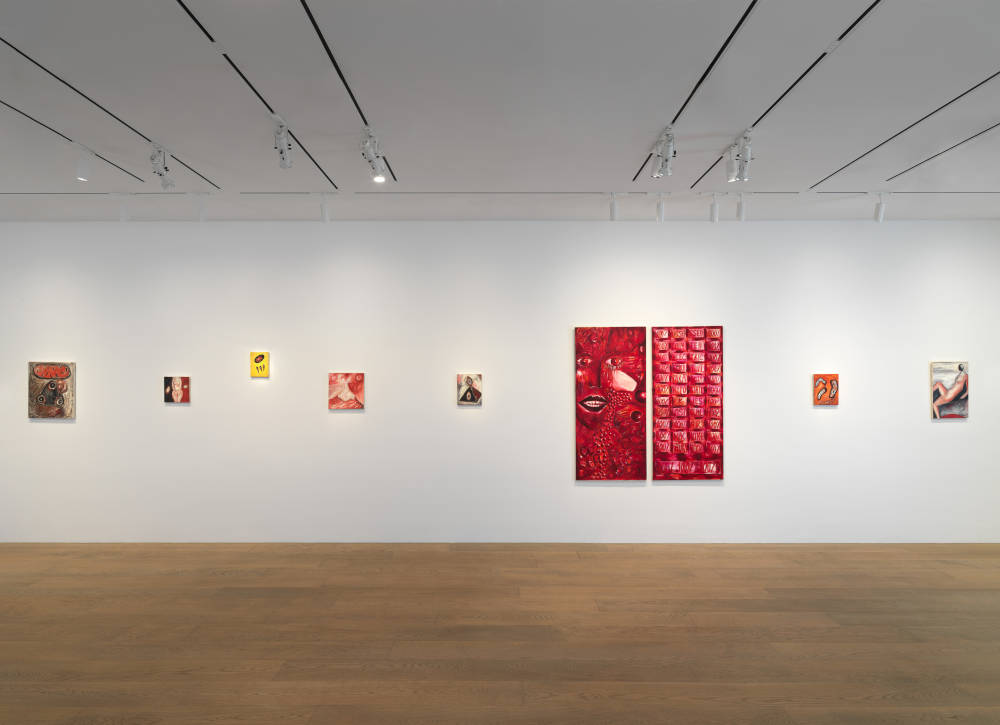 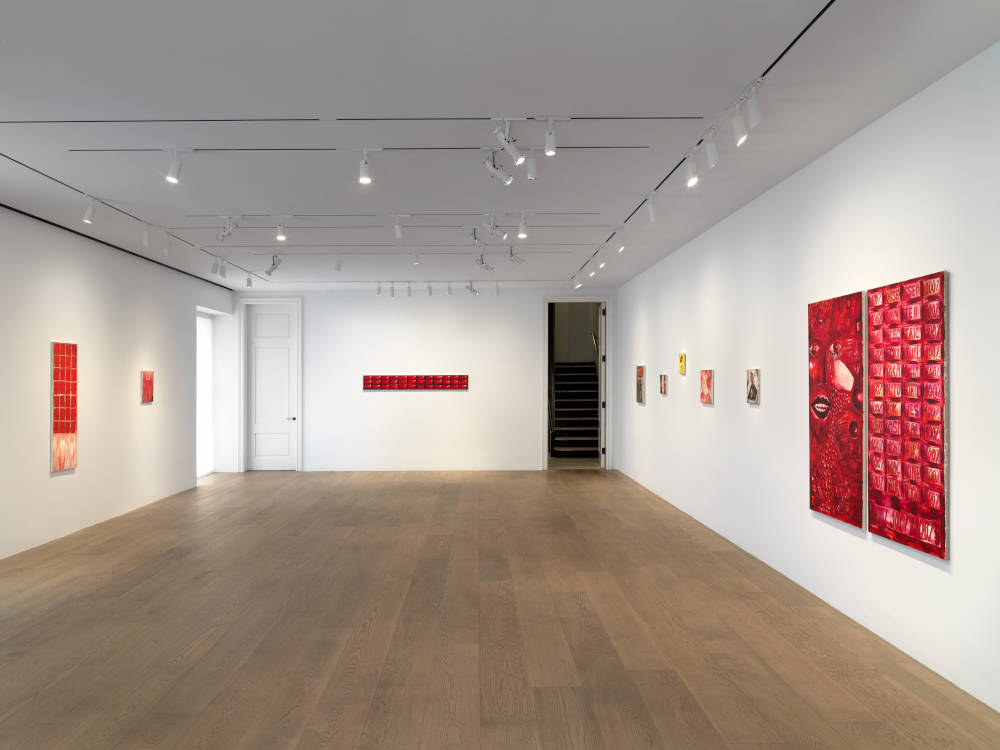 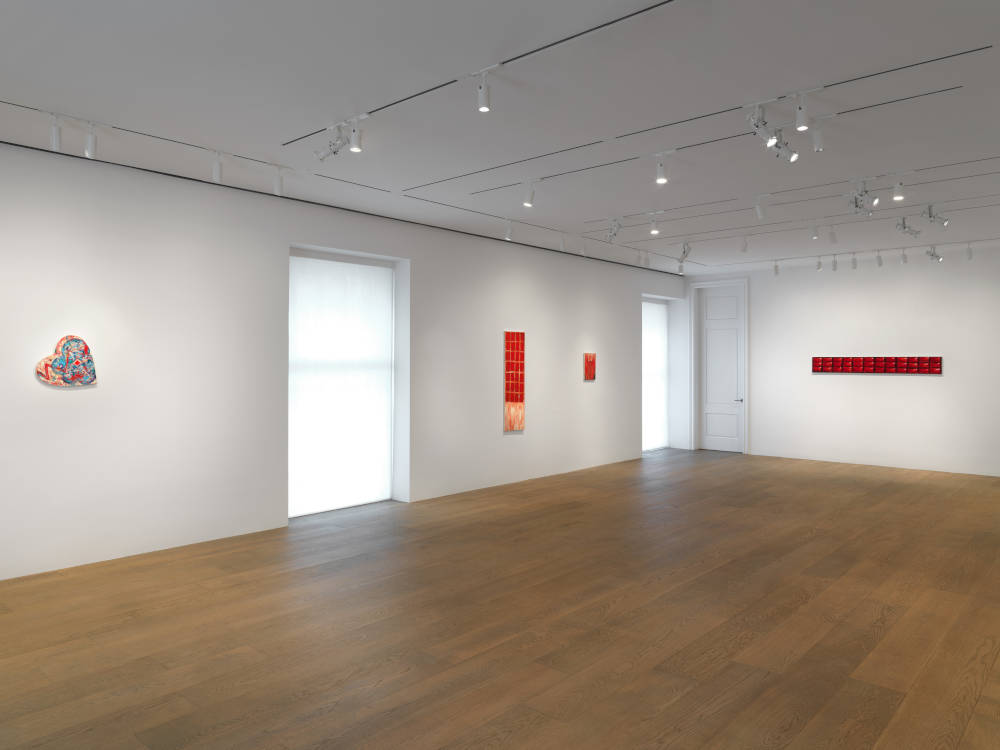 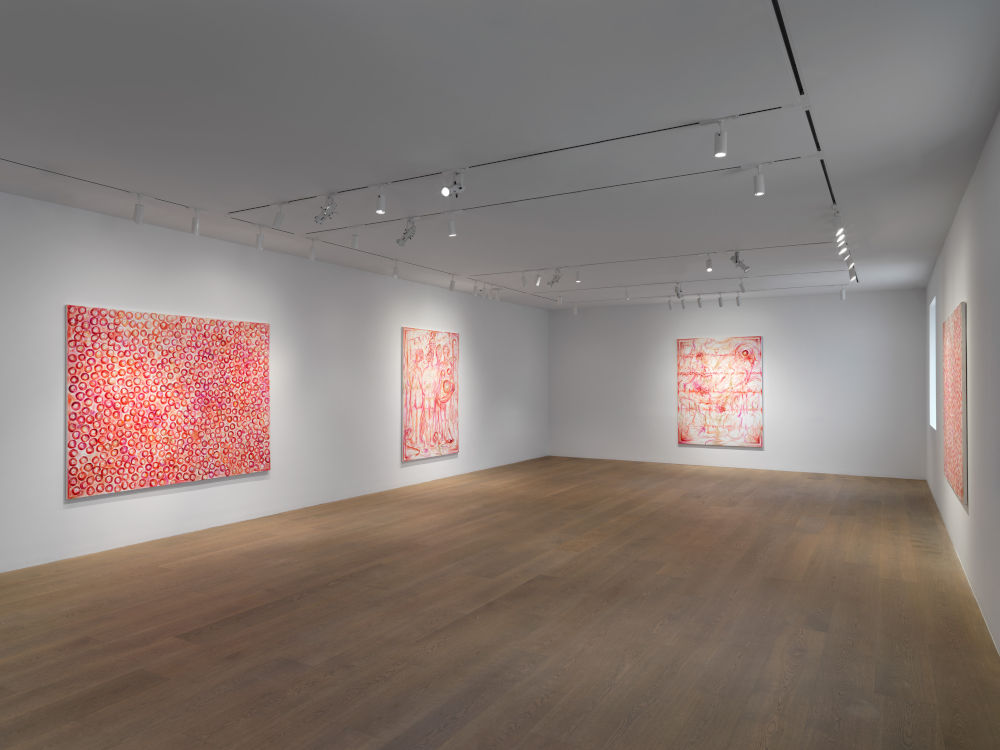 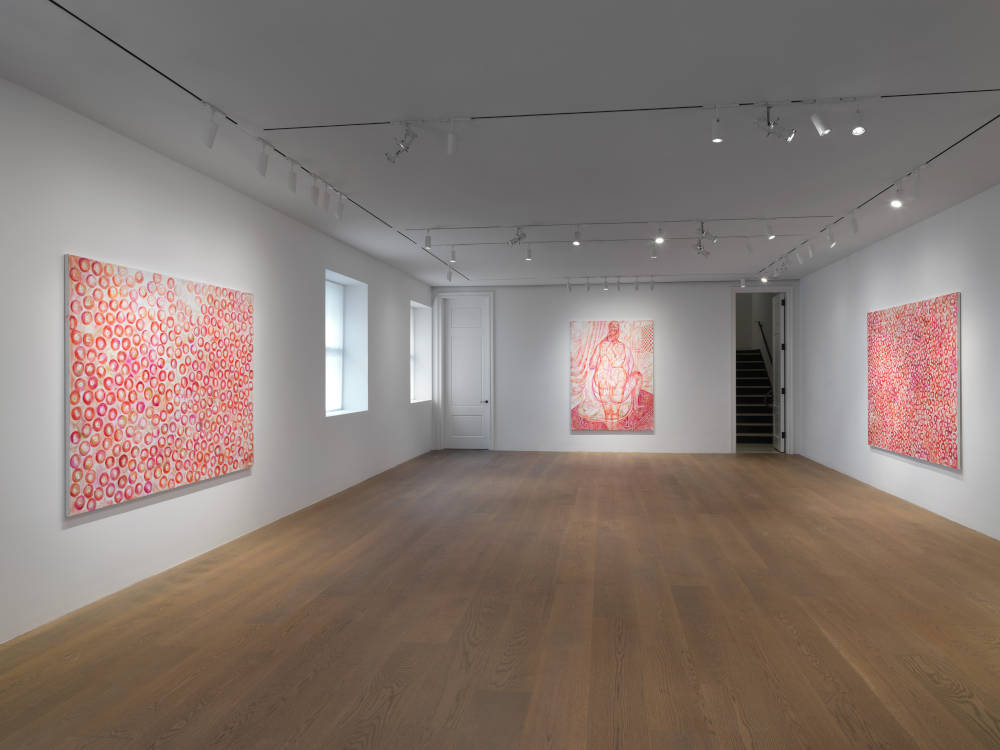 Departing from the question of what it means to paint, and to continue painting, in the present moment, Koether adopts a fluid authorial position. Mining the discourses of appropriation that shaped Cologne culture in the ’80s, as well as those that she encountered when she moved to New York in 1991, she makes them her own, constructing an eclectic artistic genealogy that runs from early-modern perspective painting through Symbolism, Post-Impressionism, and Surrealism. She layers these allusions with a recurring repertoire of motifs, including pixelated grids, vibrant red paint, and unfurling ribbons. The meaning of these tropes is insistent but elusive, at once historically layered and negotiated anew by each viewer who encounters Koether’s canvases. Engaging with both the medium’s past and its unfolding present, Koether foregrounds affect, asynchrony, and dissonance, clearing a new and distinctly contemporary space for painting.

At Lévy Gorvy, three new large-scale paintings greet the visitor on the ground floor. Prismatic and complex, each embraces pendent meanings—and the anxiety that such semantic irresolution may provoke—while looking forward to unforeseen possibilities. In Encore (2019), a female figure—a surrogate for the artist—commands a panoramic stage. Brushes in hand, she grasps a bowed ribbon which swirls exuberantly into space, connecting her body to the theater’s lavish interior. Pointillist dots and miniature abstract paintings compose her audience, which she confronts with arms generously open as she reprises her performance. Engaging music as an allegory for painting, Encore aligns the two art forms, celebrating their ability to condense notions and feelings that exceed expression in words.

Identical in size to Encore, though reversed in orientation, Neue Frau and Neuer Mann (both 2019) convey Koether’s vision of their titular “new woman” and “new man”: concepts with a rich legacy among avant-garde artists, who sought to unite art and life, revolutionizing both in the process. Set on Manhattan’s Lower East Side, Neue Frau overlays a mural of trailblazing politician Alexandria Ocasio-Cortez with a looping garland. Its pendant, Neuer Mann, depicts two male bodies. One tumbles through space, entwined with a cascading ribbon, while another stands with his left finger pointed upward; this enigmatic gesture likewise appears in the paintings of Leonardo da Vinci, hinting at his conception of painting as a mode of thinking with one’s hands, wherein the artist inhabits the picture, fusing mind, body, and image. Set within a field of kaleidoscopic color, the upright figure here cradles a palm tree: a possible allusion to Christ but also a symbol of renewal, like the delicate yet resilient plant that sprouts from concrete before Ocasio-Cortez’s likeness in Neue Frau.

The exhibition’s second floor attends to Koether’s early years in Cologne, introducing concepts and structures that thread through her oeuvre. Intimately sized, like ritual objects or fetishes, these paintings bear witness to the artist’s search for alternatives to both standard narratives of modernism and then-dominant models of Neo-Expressionism. Seeking other ways to be, and to be as an artist, Koether looked to esoteric and dissident traditions, “sipping” them, as two paintings in the exhibition, Some Esoteric Sipping (1986), propose. Defined by irregular squares from which fibrous cords alternately dangle and sprout, each moves between abstraction and figuration, transforming the canvas into a bodily terrain. Earlier canvases, such as Edie (1983) and Untitled (1984), emphasize the materiality of paint, here presented as a metaphor for flesh— with their dense impasto, skin-toned palette, and fragmented female bodies. Deliberately crude, they effect a sense of spatial compression that relents in the mid-to-late 1980s through lighter, more liquid applications of paint. Rendered in a range of intense reds, 100% (Portrait of Robert Johnson) (1990) pairs a schematic face with a litany of nouns and descriptors, including “obsessed,” “electric,” “spiritual,” “astral,” and “aura.” Incongruous and charged, the diptych illuminates Koether’s singular approach to painting, a medium that she pursues with “100%” commitment, unfazed by postmodern proclamations of its demise.

Vorhang (1988–89) introduces the red curtain motif that reappears in the cape and coiffure of the protagonist of Encore, as well as in the quivering lines and fissures of the Holding series (2019), also on view in the exhibition. An uncanny association binds the latter’s title, “Holding,” to the German word “Haltung,” which denotes both an attitude and a state of complete concentration. Koether’s curtains double as membranes: permeable skins that at once separate and join her to her cultural milieu, allowing influences to pass through and leave their marks. Such notions of transmission and absorption develop from the work of Katherine Mansfield, a modernist writer who was part of the London circle around Virginia Woolf. Mansfield’s vivid accounts of hue, shape, and sensation, both in her observations of everyday life and in her reflections on Impressionism and Paul Cézanne’s apples, deeply influenced Koether, contributing to the centrality of the color red and organic, rounded forms within her oeuvre.

On the exhibition’s the third floor, a suite of new paintings elaborates upon Koether’s unique mode of appropriation. The artist’s approach, which she describes as “affective import” is a process of both introduction—the movement of objects and ideas from one context to another—and signification, the suggestion of a meaning sensed not explicitly stated. Questioning the ways in which painting’s past is accessed and mediated, Koether honors the psychological pull of her sources, positing making as a reciprocal endeavor wherein the artist does not master the source but allows it to repercuss and ramify. In Pink Ladies 2 and Pink Ladies 3 (both 2019), curved geometries suggestive of apples and breasts accumulate, recalling Mansfield’s query, posed in a 1917 letter to a painter friend: “When you paint apples do you feel that your breasts and your knees become apples, too?” Ubiquitous within the genres of still life and nude, these shapes fuse art and body, summoning biomorphic abstraction in the post-minimalist sense in their obsessive iteration.

A trio of canvases, each organized by the number four, build upon the tradition of multi-figure allegorical painting, as seen in examples as wide-ranging as Italian Renaissance master Jacopo da Pontormo’s Visitation (1528–29), Pablo Picasso’s Les Demoiselles d’Avignon (1907), and Henri Matisse’s Dance (1910). Lespugued Leigh (4 Lucian) (2019) finds pleasure in dissonance, layering a likeness of Lucian Freud’s visceral depiction of performance artist Leigh Bowery in Naked Man, Back View (1991) with the bulbous silhouette of the paleolithic fertility idol Venus of Lespugue (c. 26,000 BCE). Dürered (4 Women) (2019) grounds itself in Albrecht Dürer’s engraving, Four Naked Women (1497), a work of art whose meaning remains undecided, endlessly intriguing but frustrating scholars who seek a straightforward exegesis. Koether reimagines the scene as a concentration of conflicting feminine energies, which she interrupts with several of her signal motifs, including ambiguous apples-cum-breasts and clichéd emoji-like forms that she calls “demonic options,” which here occupy the vantage of the small horned devil in Dürer’s original. These bubbleheads unsettle the scene with their mischievous strangeness, by turns undermining its seriousness and prompting unexpected details to emerge.

Lending the exhibition its subtitle, Koethered (4 the Team) (2019) couples a line from a 1986 speech by Joseph Beuys—”die Fackel der offenen Gesellschaft trägt sich nicht von selbst” (“The torch of open society does not carry itself”)—with the motto “4 the team,” which Koether clipped from a Mercedes-Benz advertisement celebrating the collaboration that contributes to a Formula One victory. Inscribed atop an array of sinuous, slipping lines and clusters, these disparate texts cut to the core of Koether’s practice, which conceives painting as a social medium: the product of a collective consciousness, at once esoteric and everyday. Koethered (4 the Team) thus speaks to essential values that enable artmaking, here conceived a complex dynamic of continuity and change, its survival contingent on its ability to be carried forth by new actors.

On the occasion of the exhibition, Lévy Gorvy will publish a limited-edition artist’s book with texts by the artist and noted art advisor Allan Schwartzman. Miming the format of an auction catalogue, the book centers on Demonic Options (large format #1) (2010): an assemblage painting held in the collection of the Whitney Museum of American Art, New York, which features many of the visual tropes and conceptual strategies that animate Koether’s oeuvre. Together, the two offer a provisional key to Koether’s practice, which extends from Cologne to New York, from the 1980s to our day and beyond.