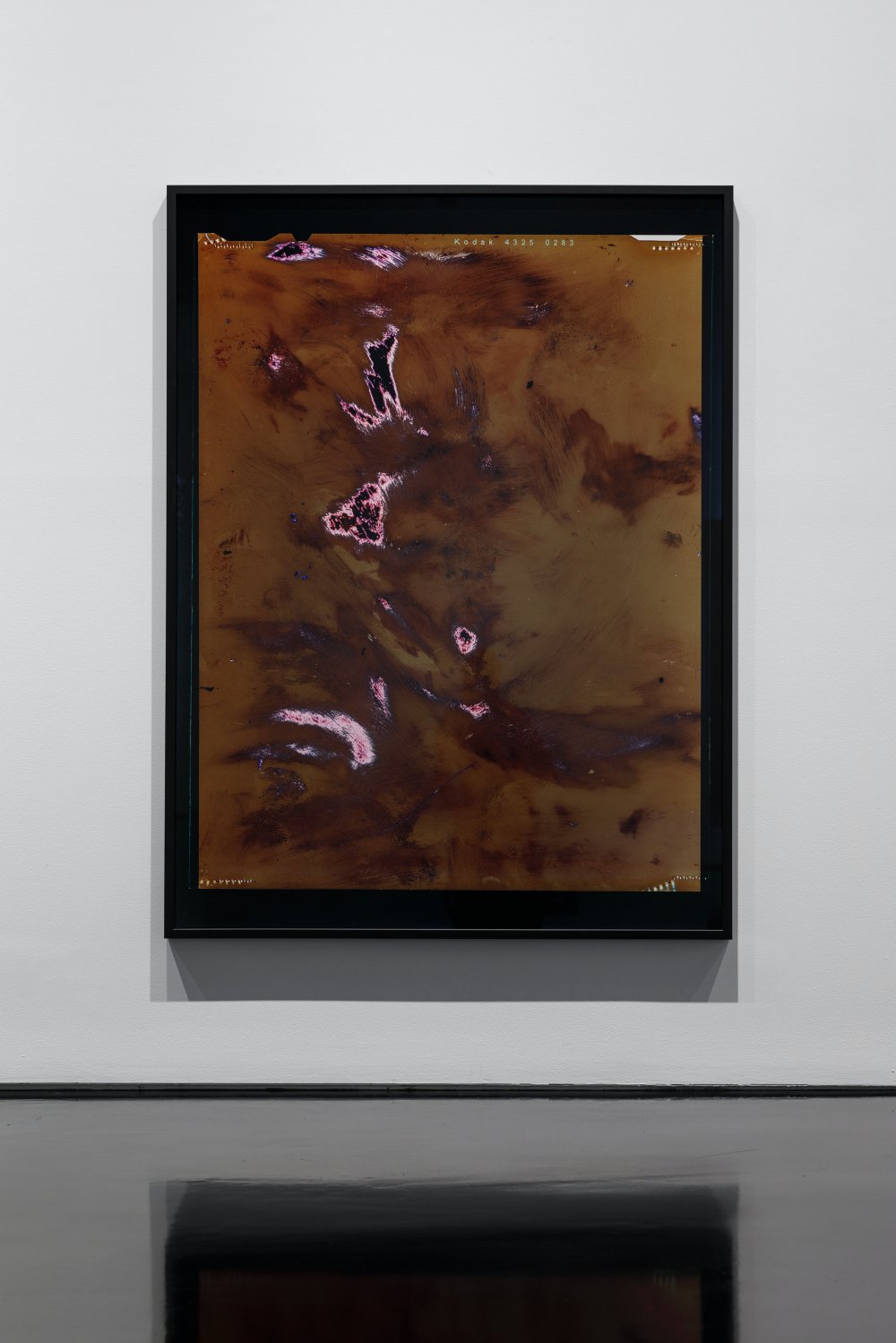 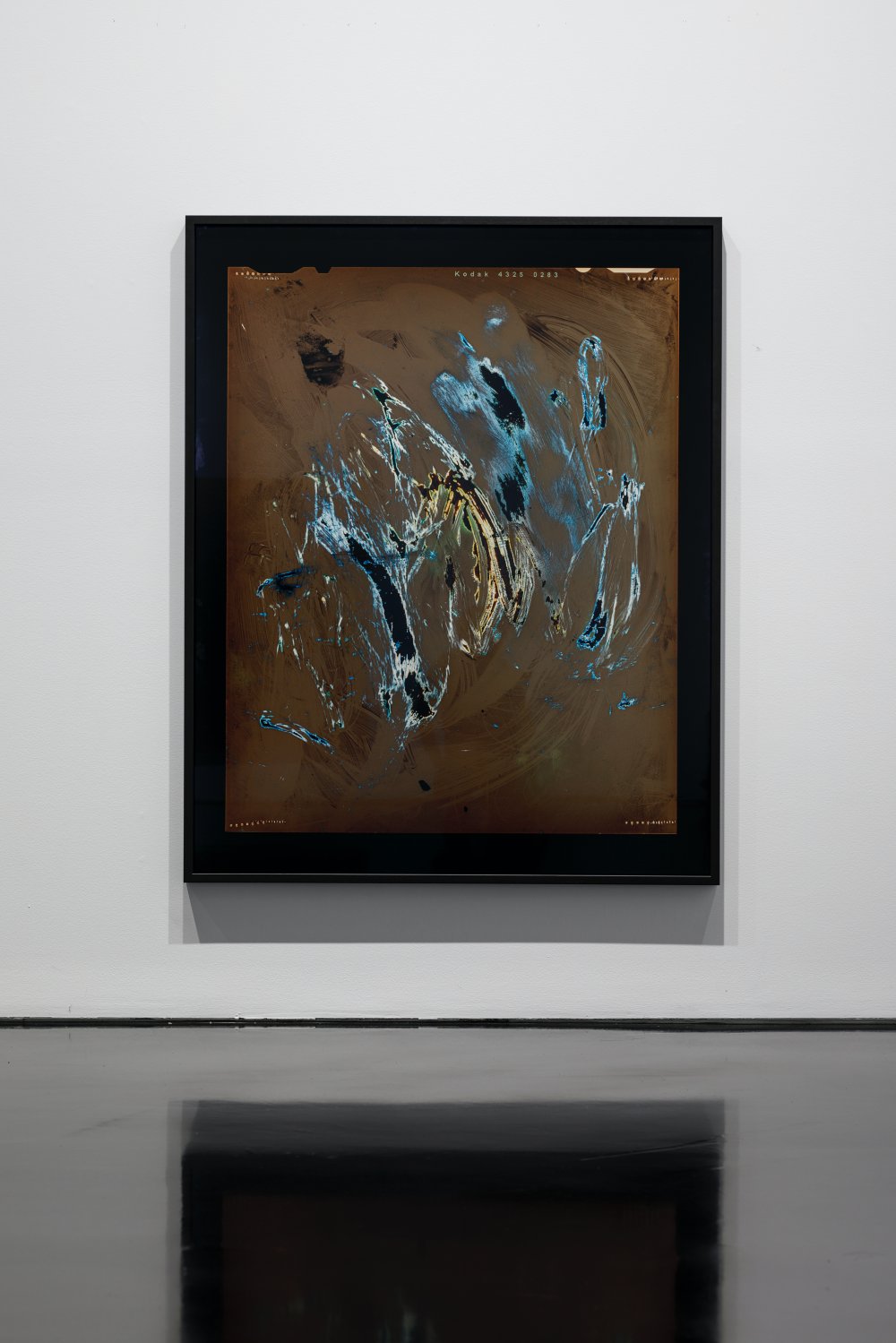 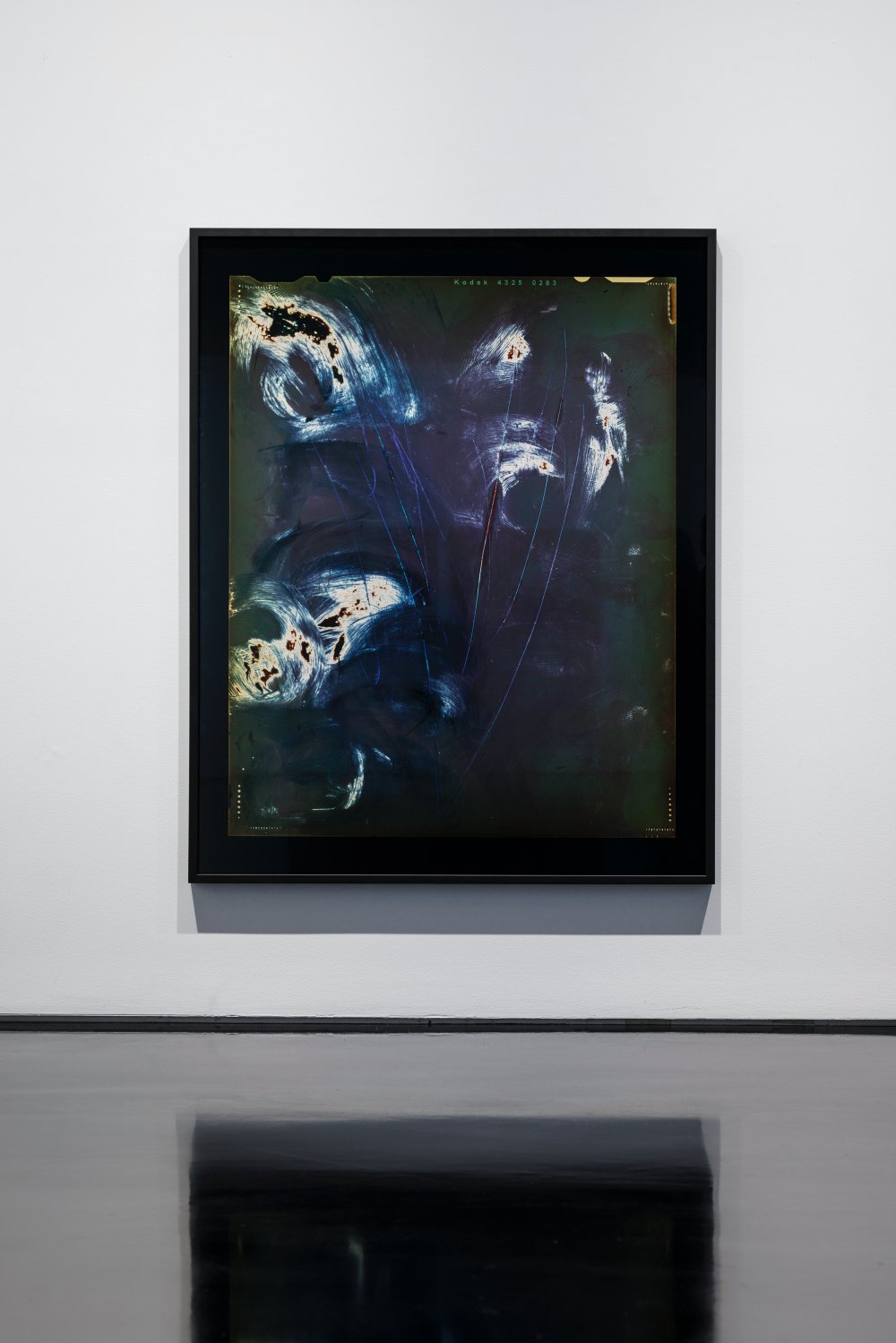 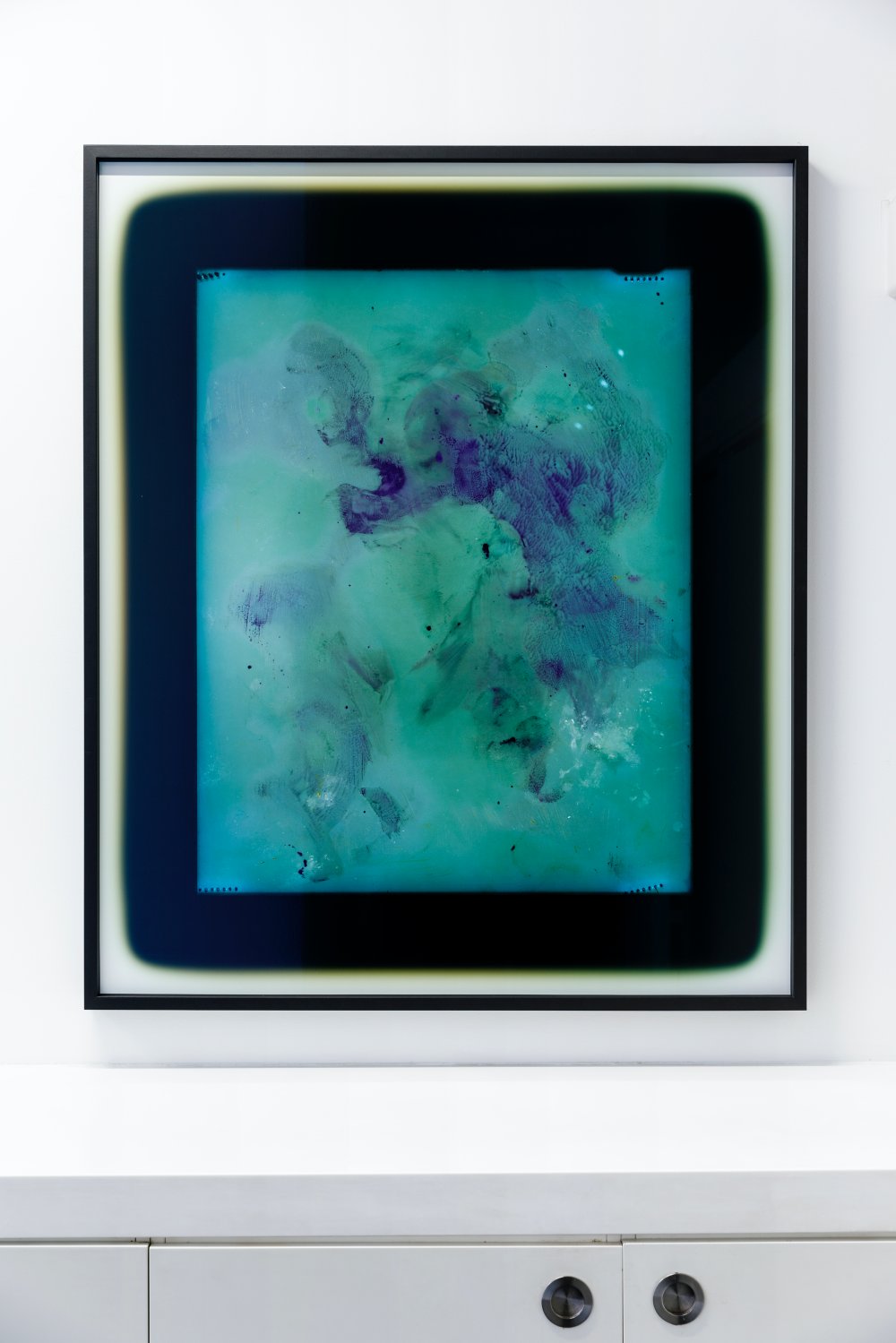 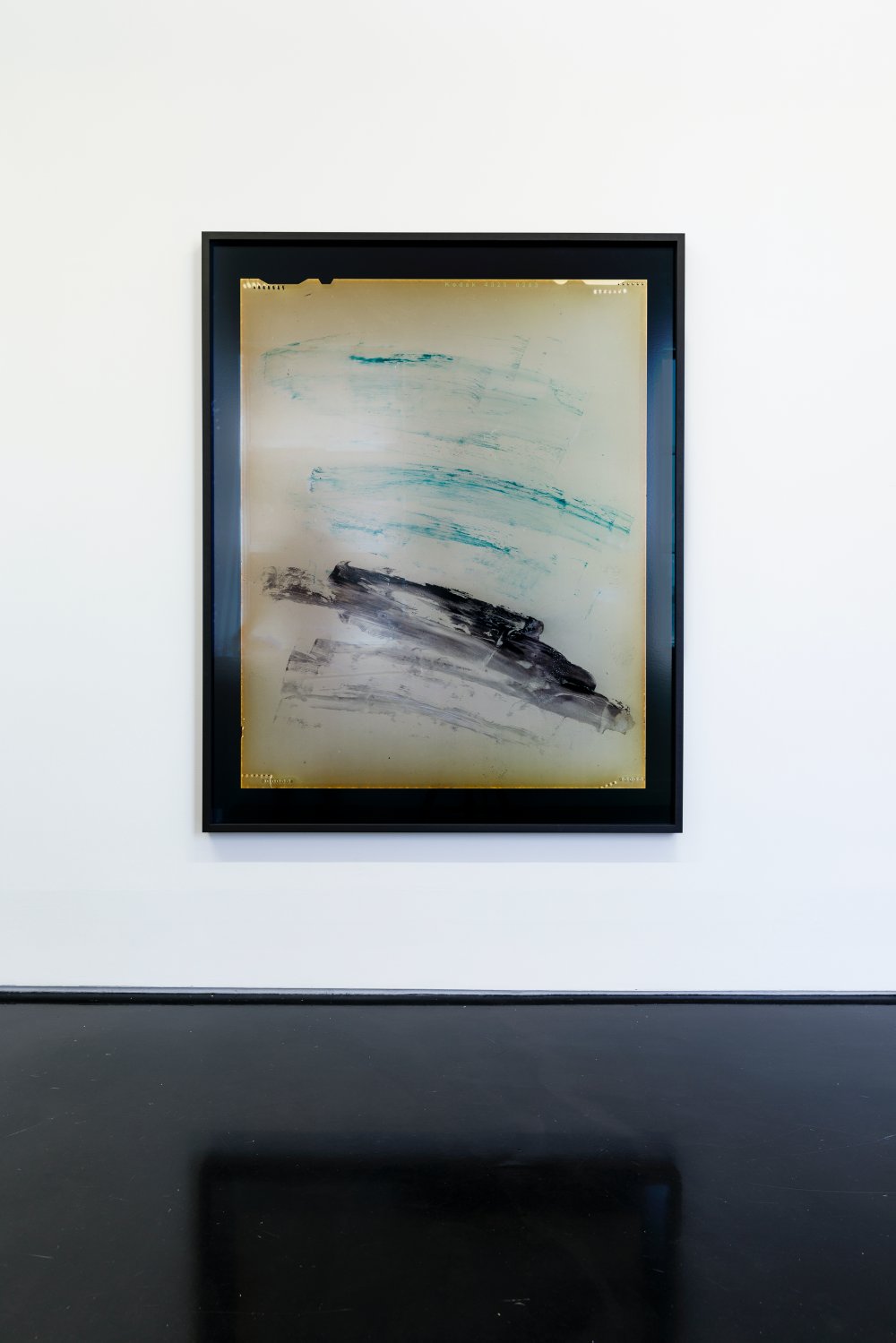 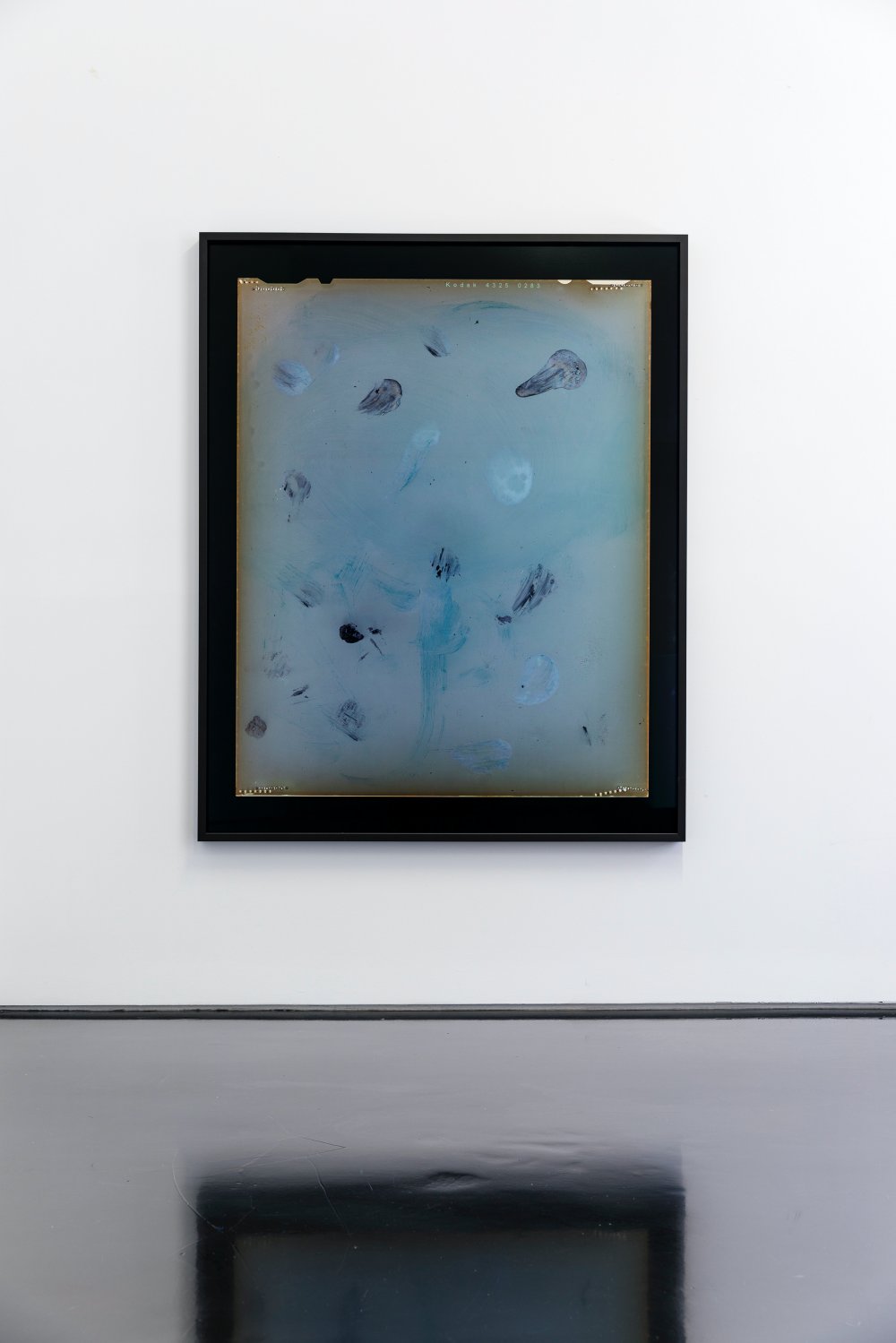 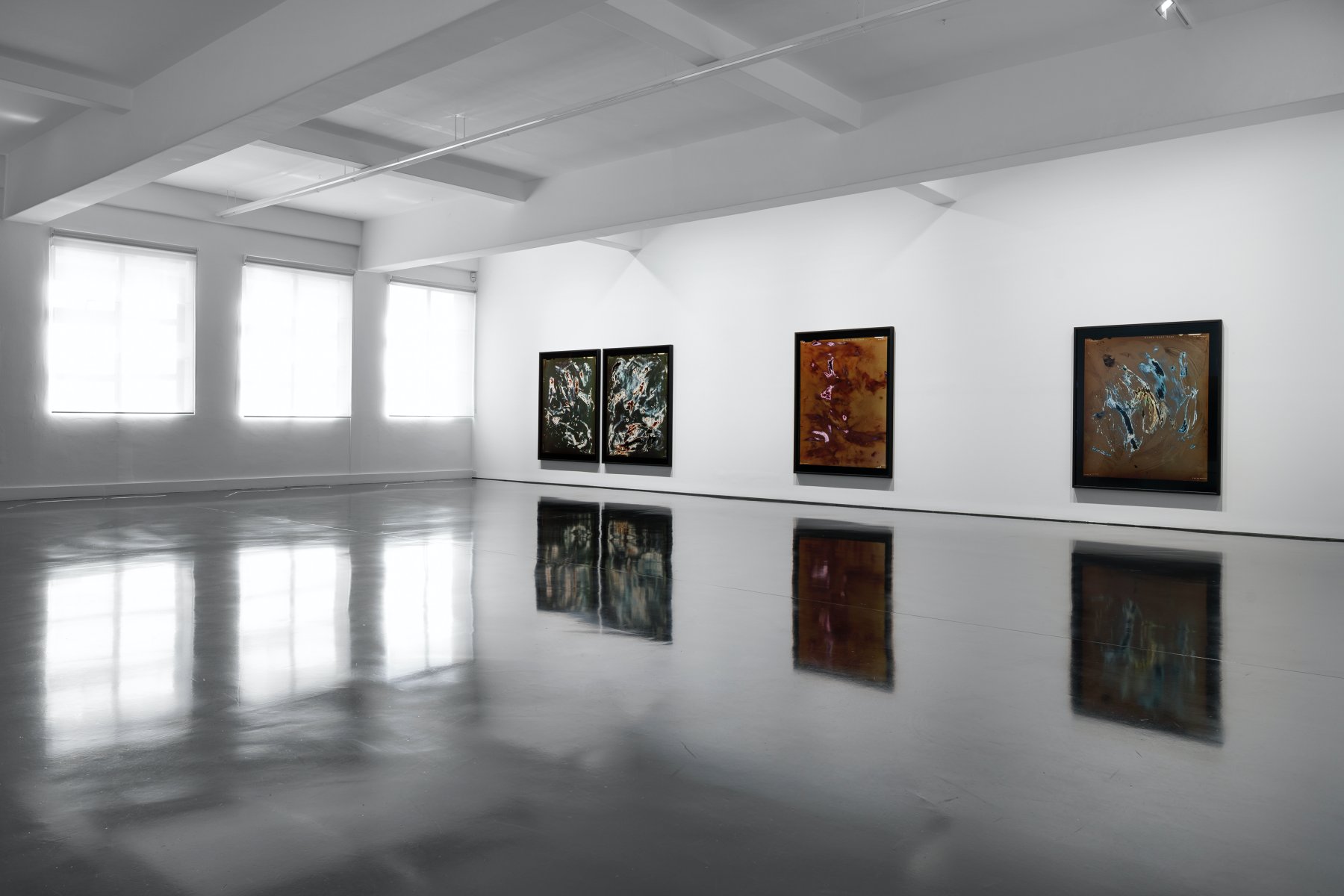 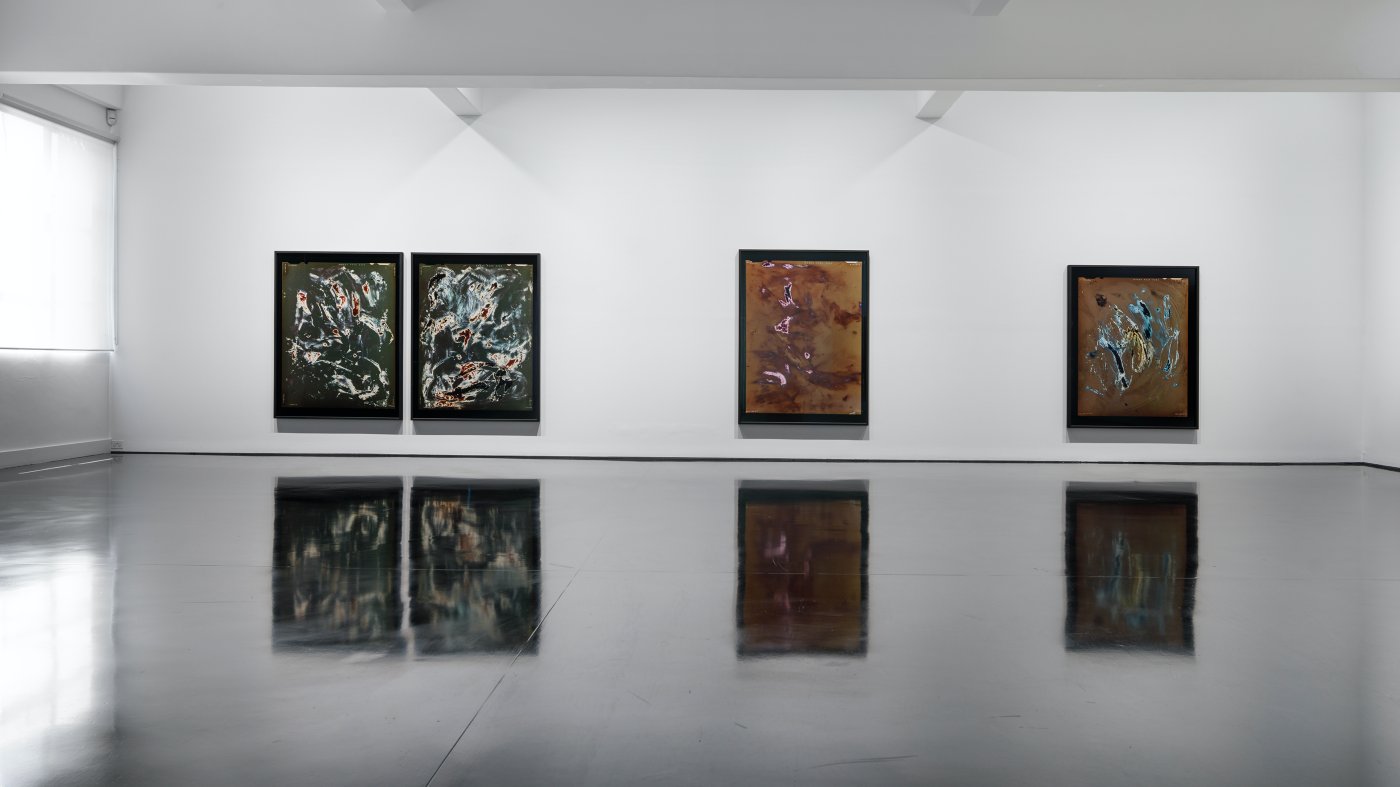 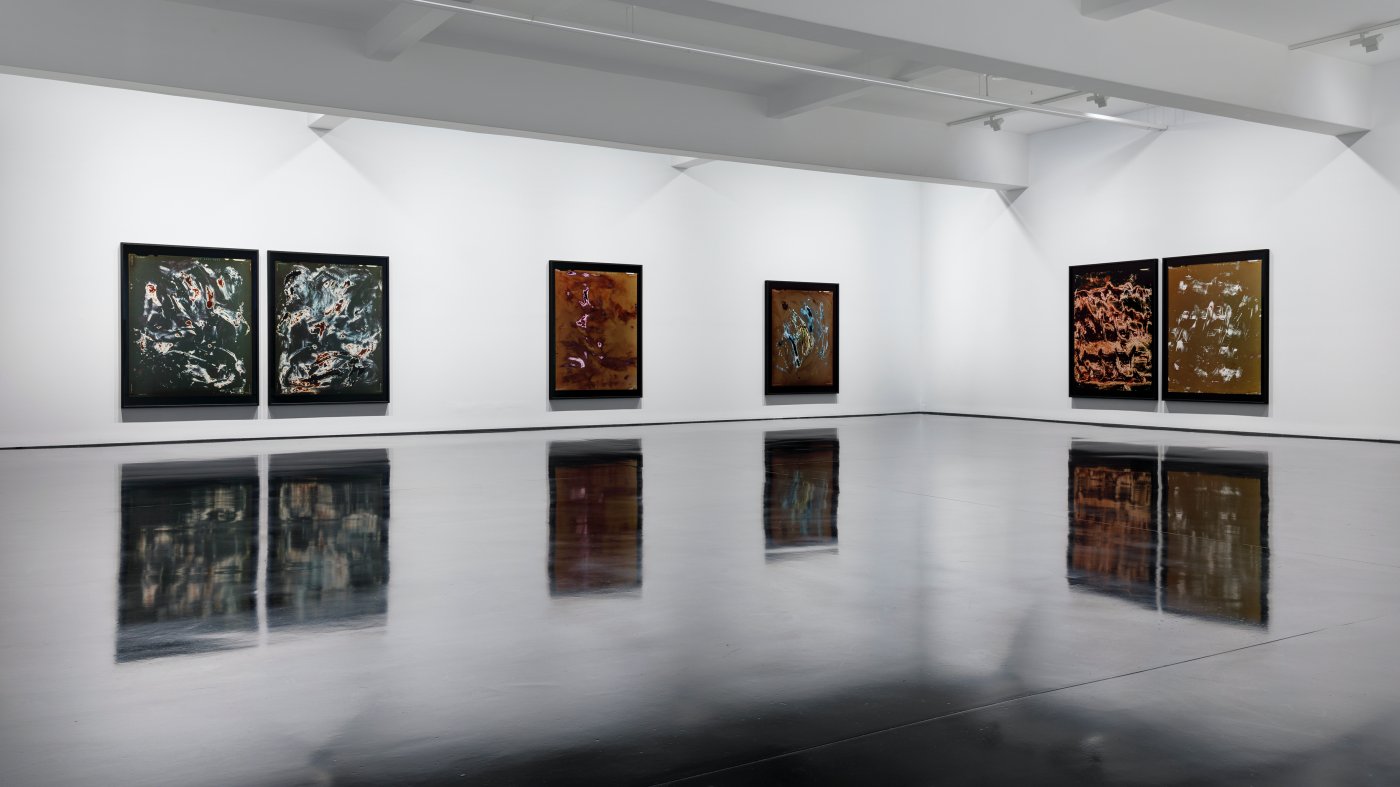 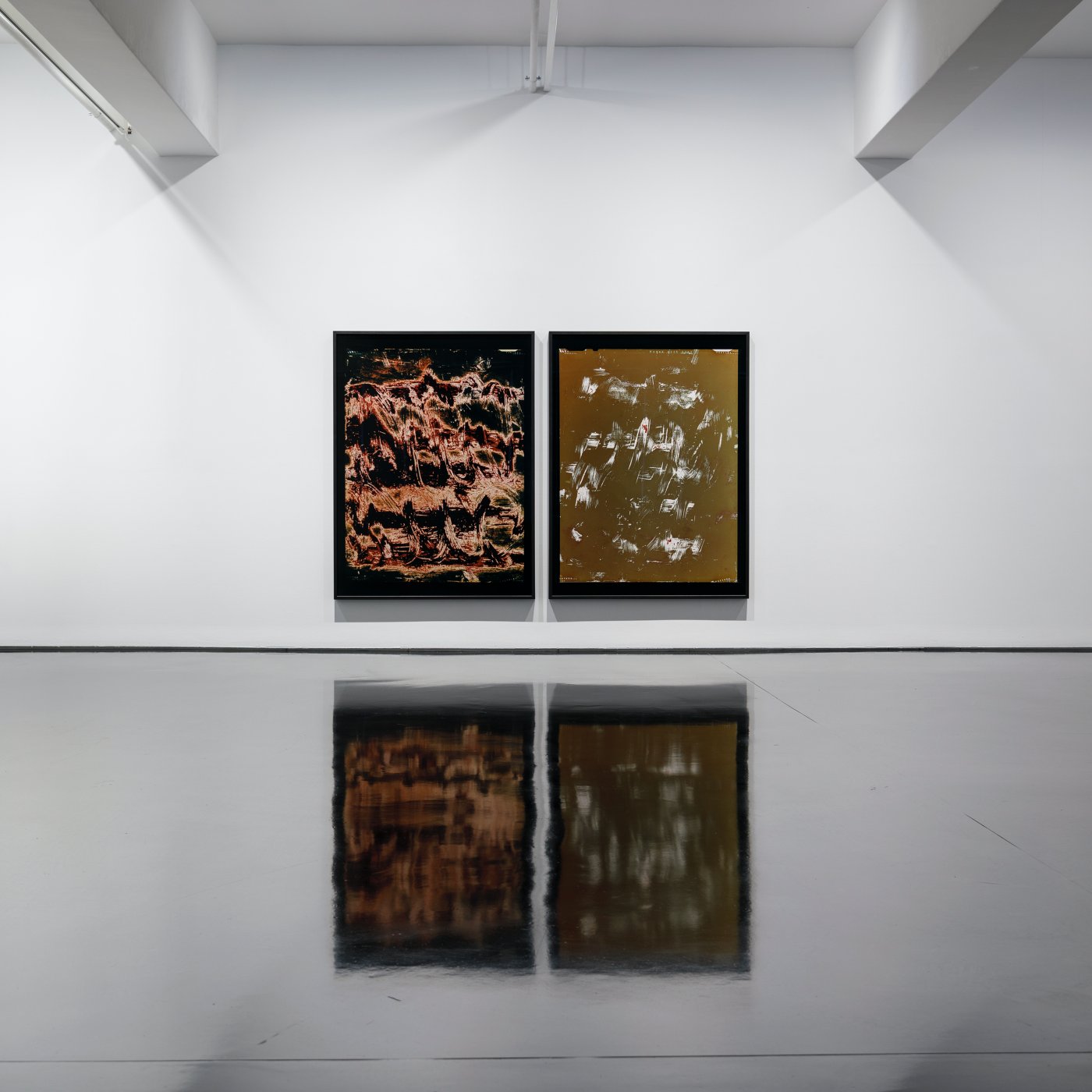 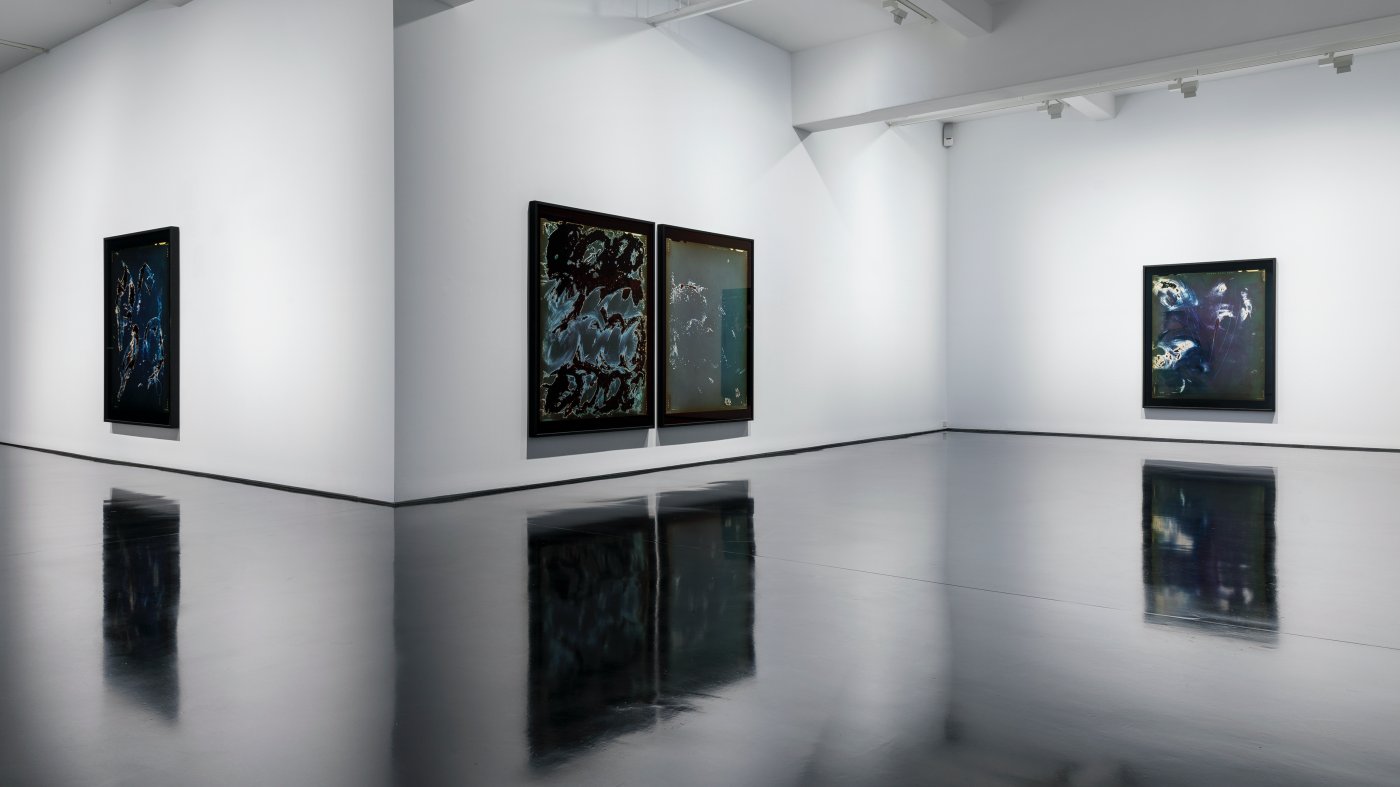 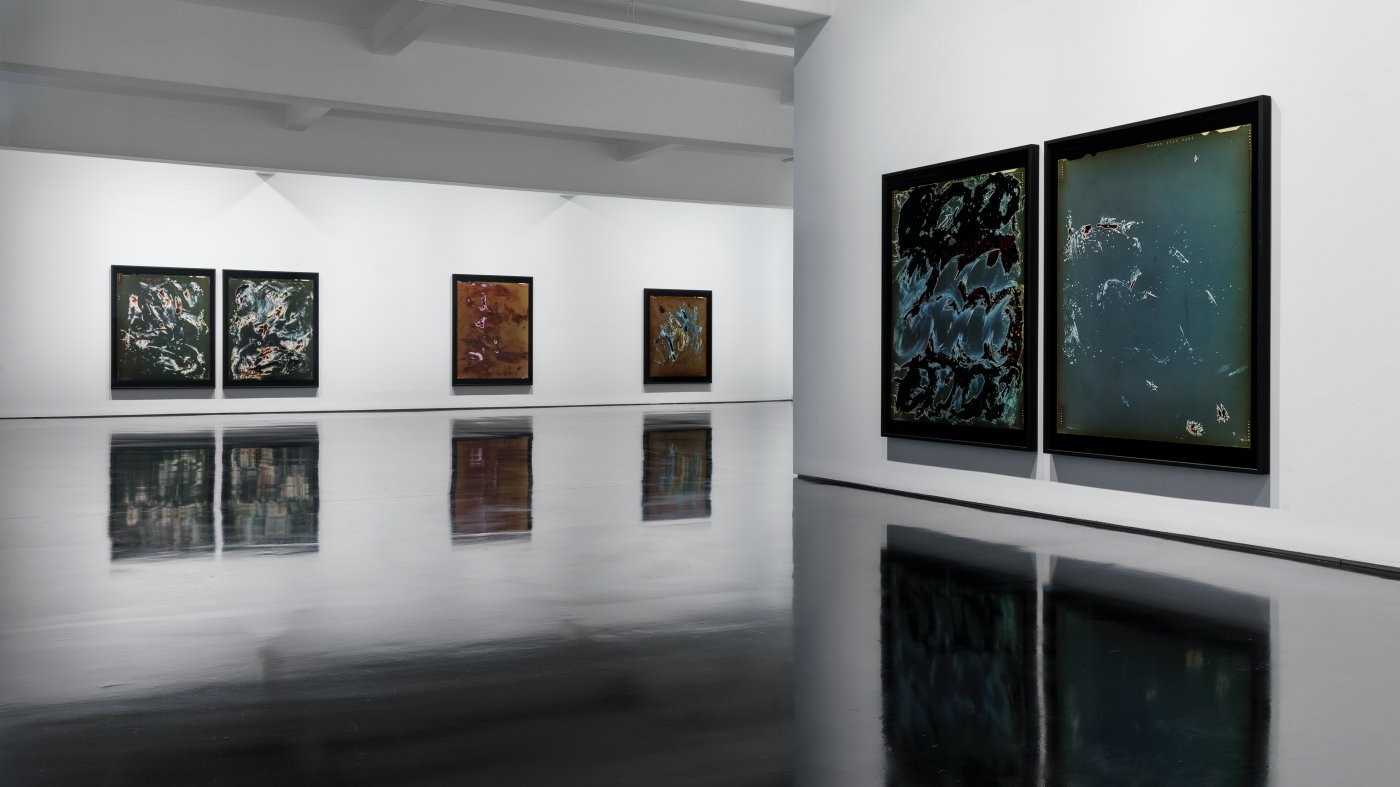 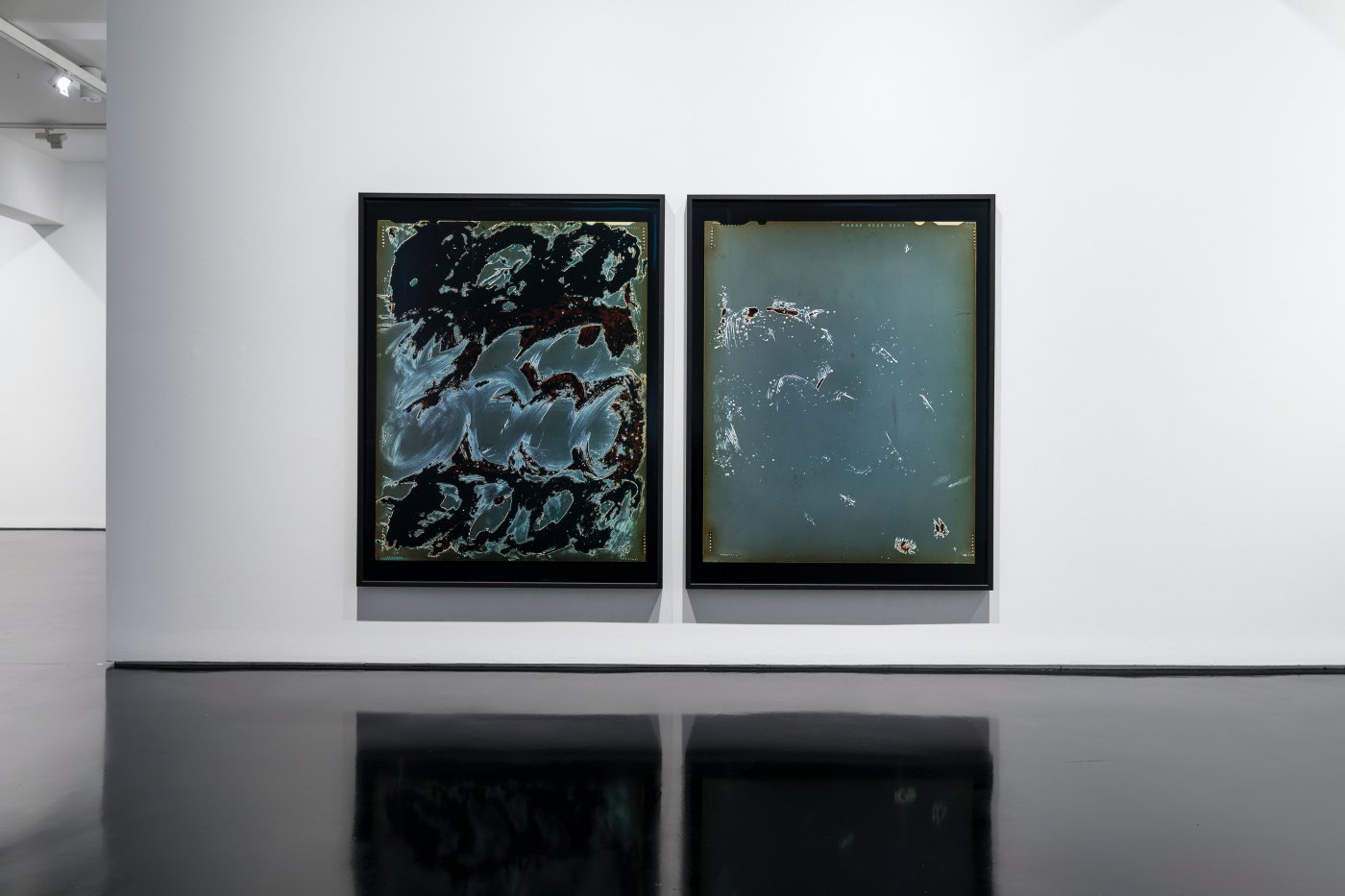 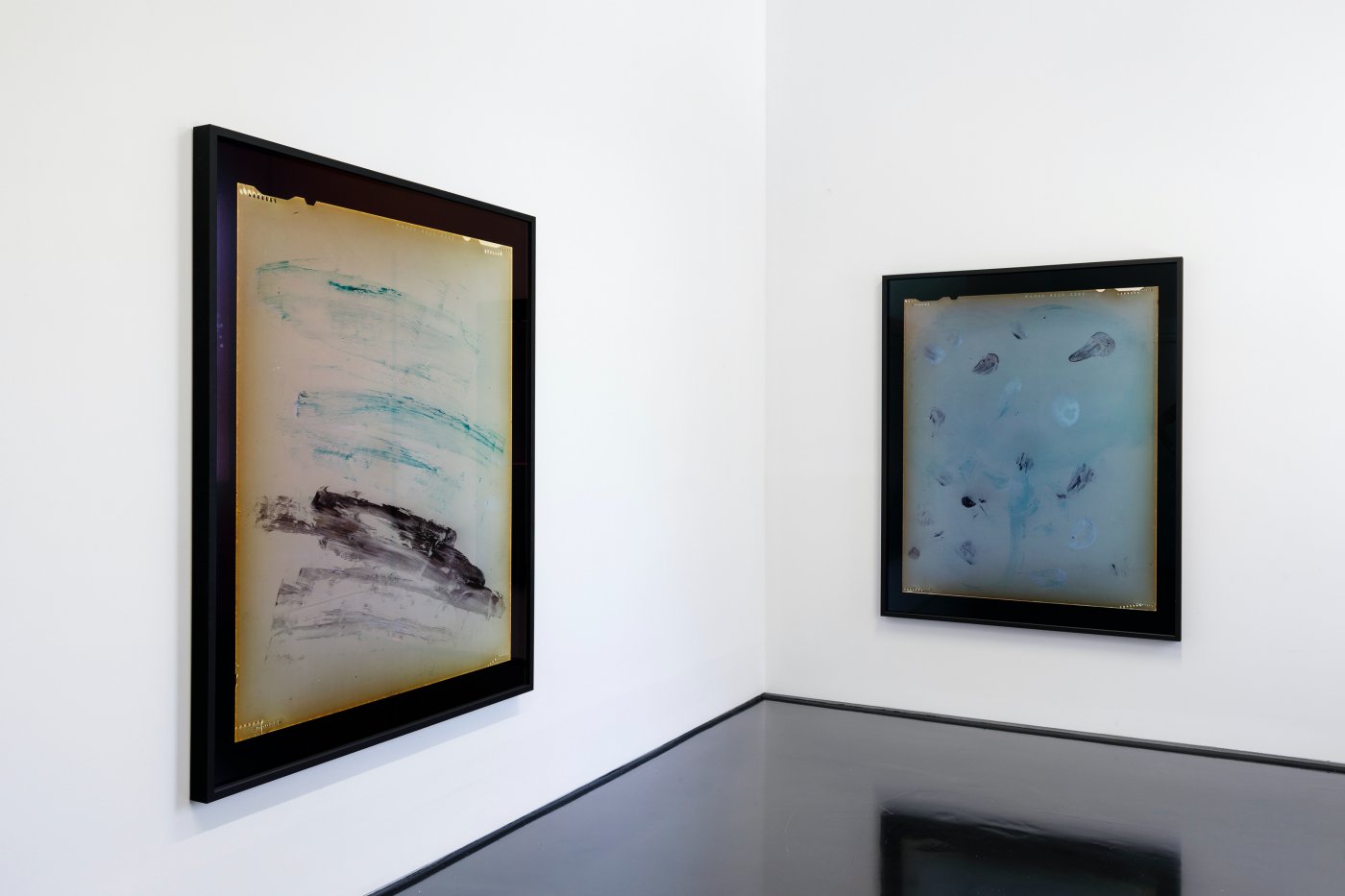 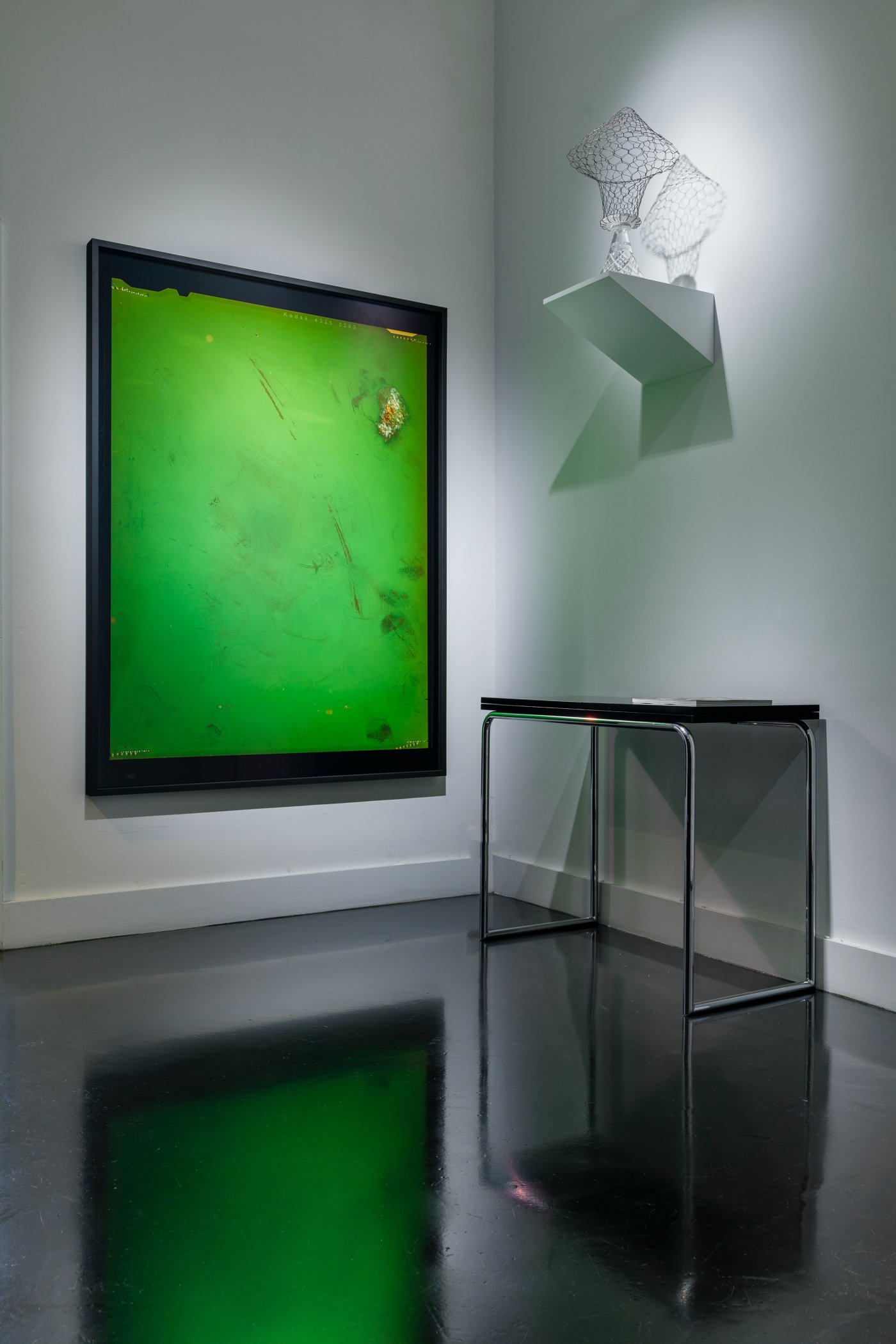 The negatives from which these photographs derive were smeared and stained with pigment during their long exposures. Justine Varga has always seen her photography as a drawing with light, or more literally as a light-sensitive substrate on which she makes marks or allows the world to leave its own marks.

These photographs make visible an art practice that is at once physical and chemical, autobiographical and contingent, painterly and photographic. Tachisme is a critical rumination on inscription, meaning and knowledge.

“Touch comes before sight, before speech. It is the first language and the last, and it always tells the truth.” (i) – Margaret Atwood

Canadian novelist Margaret Atwood’s evocative description of touch reminds us that it is first and foremost a language; a form of articulation that we receive initially on our own bodies and with which we in turn reach out and connect to the bodies of others. This vital sense secures us in the world affectively and proprioceptively.

In the visual arts, touch is often conceived as a trace or remainder of action rather than a vital connection in this manner. The gesture in painting, the individual brush mark, the manual addition or subtraction of material, these are some of the ways in which we detect the trail or wake of the artist’s movement in time and space. In expressive theories of art, however, these traces are frequently taken to be indications of the artist’s presence or personality in the work of art. The strange importation of immediacy that French theorist Roland Barthes and others railed against in the 1960s seems an inexpungable problem in art and literature. A mark becomes a ‘voice’ rather than writing. As Barthes famously wrote:

The image of literature to be found in ordinary culture is tyrannically centred on the author, his person, his life, his tastes, his passions… The explanation of a work is always sought in the man or woman who produced it, as if it were always in the end, through the more or less transparent allegory of the fiction, the voice of a single person, the author ‘confiding’ in us. (ii)

Likewise, this fiction of presence and direct communication operates in the visual arts—touch elicits the artist, conjures them into the work. In Justine Varga’s work, this problem, more usually associated with painting and sculpture, is imported into photography.

Varga at once works with the vitality of touch–its rhythms and textures drawn from the body–while also exposing the mediation of representation. The latter modernist gesture of revelation or demystification can be seen very clearly in the series of photographs in Tachisme. The images all show the distinct shapes and contours of the original negative film; these negatives are placed at the centre of the image surrounded by a small border of deep black. Careful scrutiny reveals the notch codes and the tiny puncture of clip holes customarily found on the edges of film (but generally hidden from view). Additionally, the brand name “Kodak” is visible along the top of some of the images. The cumulative effect of these details is that the material substrate of photography, its means of illusion, is made over into part of the image itself. This high modernist strategy of exposure thus unveils the means of reproduction and yet curiously that revelation does not dispel the sense of connection and feeling conjured by the different gestures inscribed on the surface of the negatives.

The photographs show a range of gestures. Some of the photographs seem to have been scratched (Parenthesis, Transference, Vicissitude), others have been stroked (Helix, Subjected), and finally two have perhaps been prodded or stimulated into independent action (Metastasis, Alchemical). The images that are assembled in pairs reflect the fact that touch has produced a second image: a blank negative pressed against another that has been directly inscribed reintroduces an automatic element (recalling the squeezing of the camera shutter) to the process. The exact means of image production cannot easily be read off the images, despite the depiction or presentation of film as film. That mystery sits alongside the stress on materiality, allowing these luminous images to seduce and transport us. The scale of the images, almost body sized, is clearly partly responsible for this pull or rapport, but it is not only that. Each image has a mood commensurate with the signs of contact; the touching conveys feeling. Or to put this another way, the intertwining of touching and feeling is evident.

The importance of the kinetic senses of touch and movement in thinking about affect is embedded in our language: being touched, being moved, carried away or transported. Indeed, touch is caught in a whole web of associations of receptivity, understanding and sympathy: a fine touch, in touch with, great tact. The link between movement and affect can be understood with reference to Daniel Stern’s concept of vitality affects, which relate to speed, intensity and rhythm. (iii) The qualities of these feelings are best captured, he says, by dynamic, kinetic terms, such as surging, fading away, fleeting, explosive and decrescendo. Following Susanne Langer, he suggests vitality affects are forms of feelings intimately connected to the vital processes of life: breathing, sleeping, walking etc. (iv) This vocabulary of life and the body is at the heart of Varga’s Tachisme. Deciphering that language is the challenge her work poses.

– Susan Best is Professor of Art History and Theory at Queensland College of Art, Griffith University