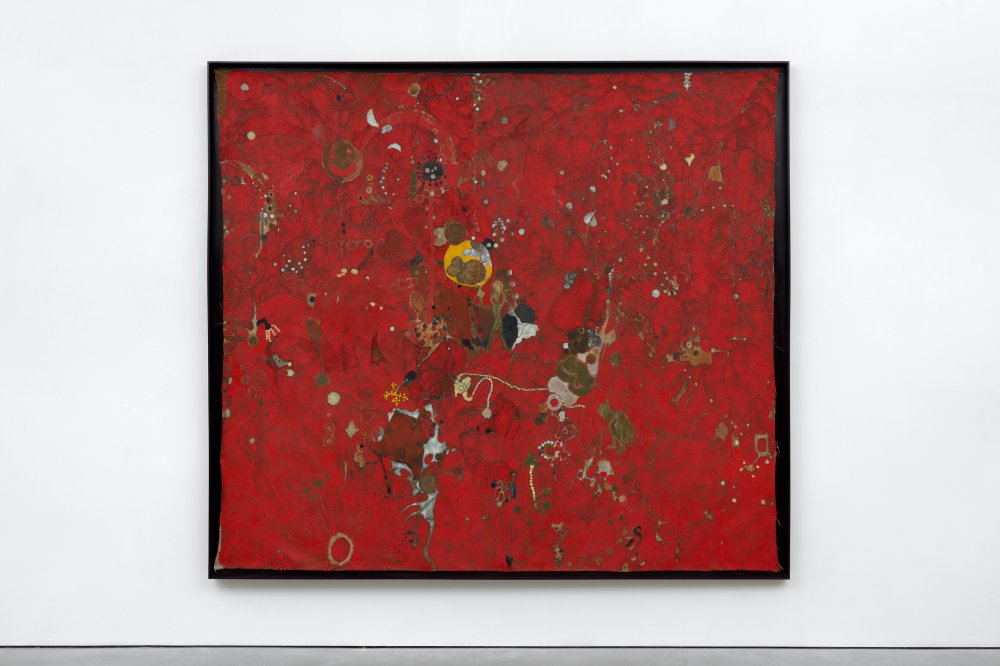 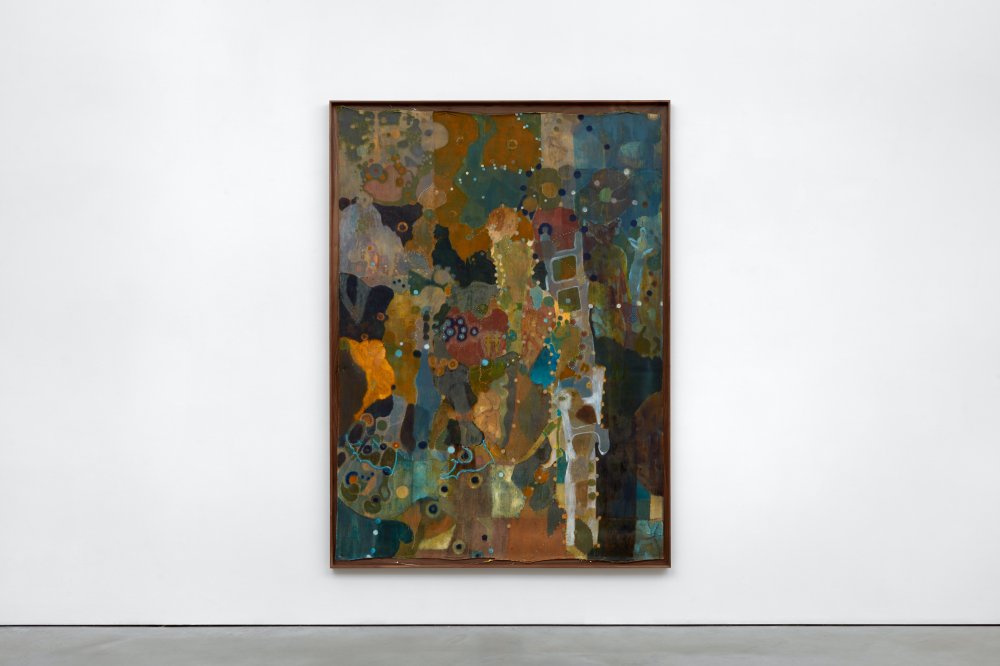 Justin Caguiat
That sent me weighing sleep against a walk around the block, 2020 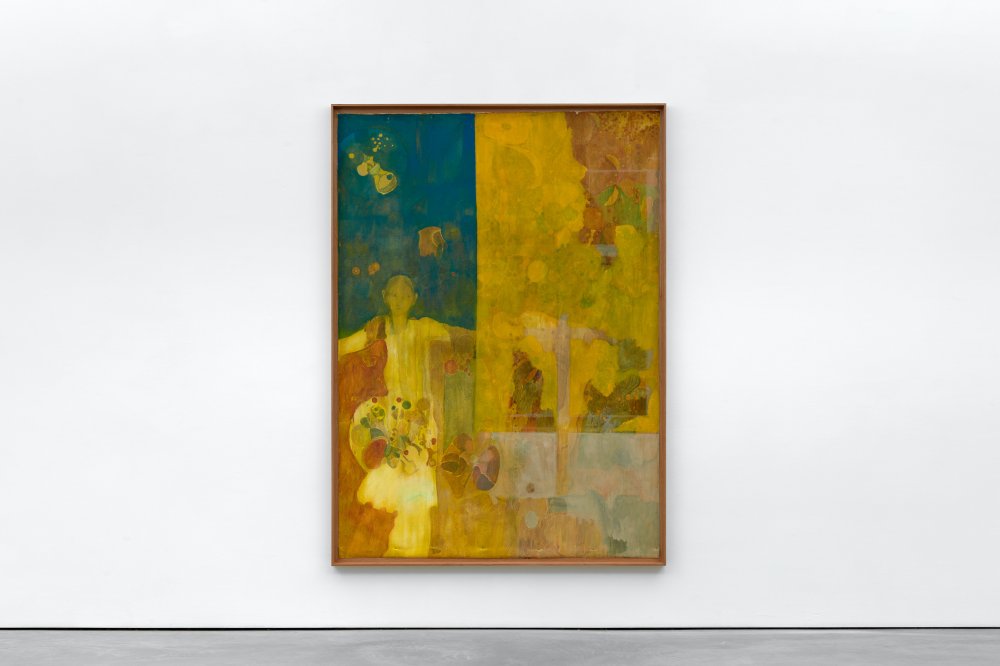 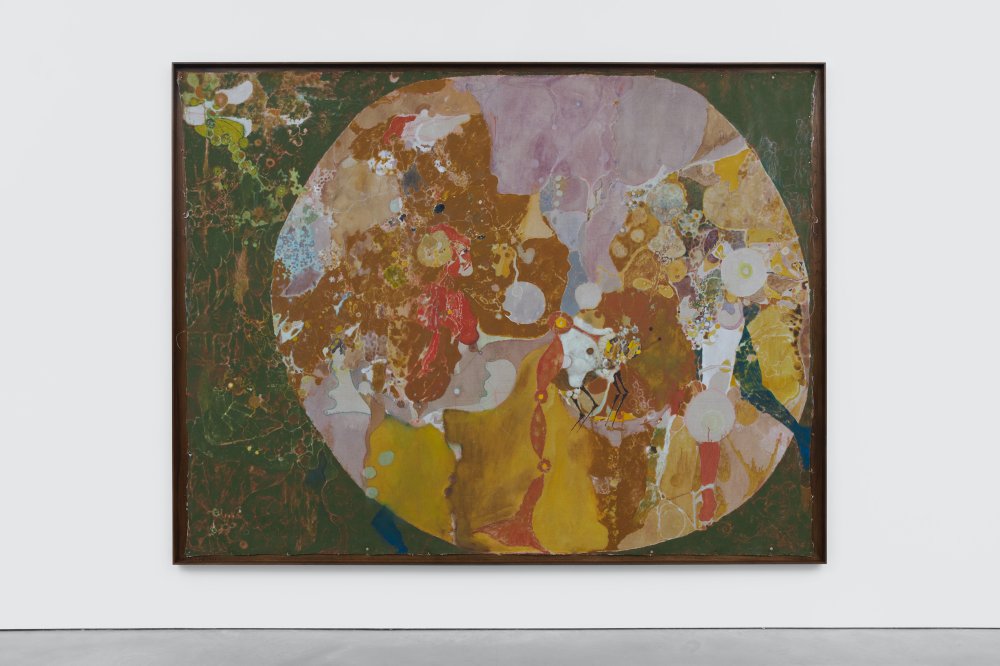 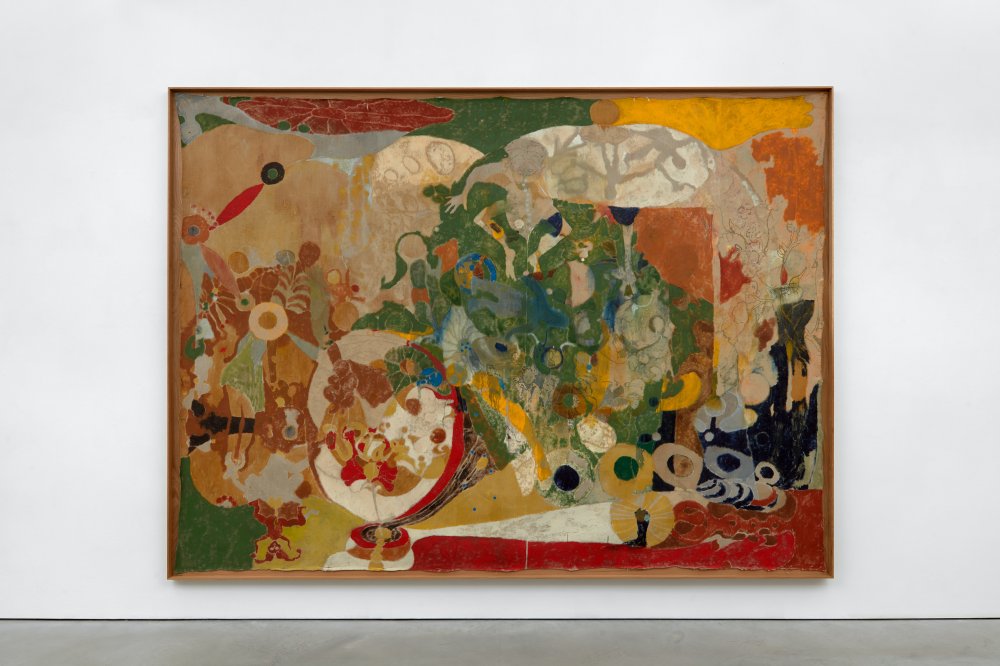 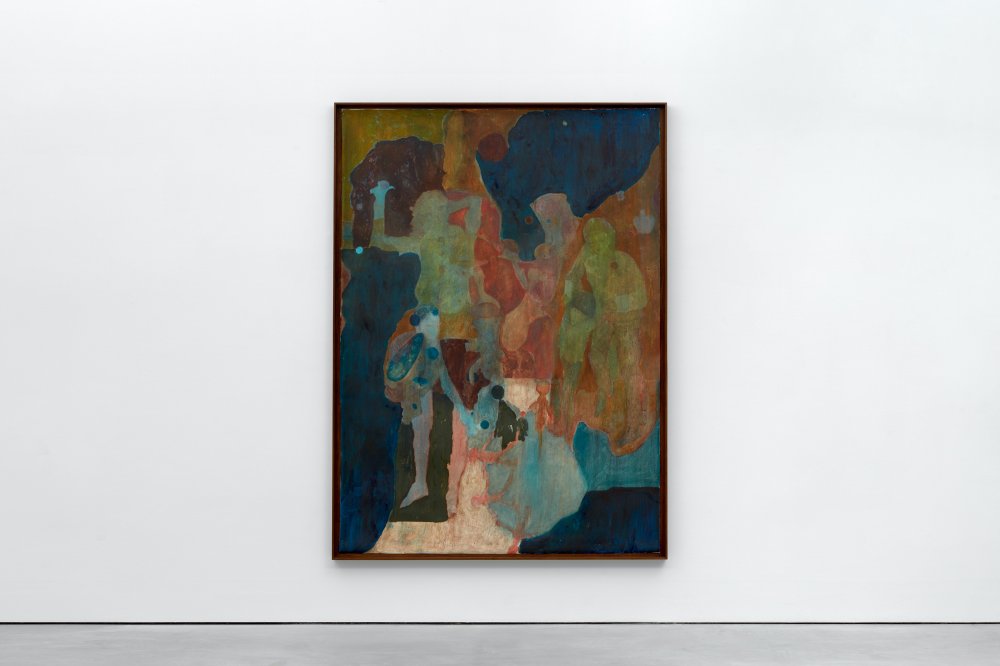 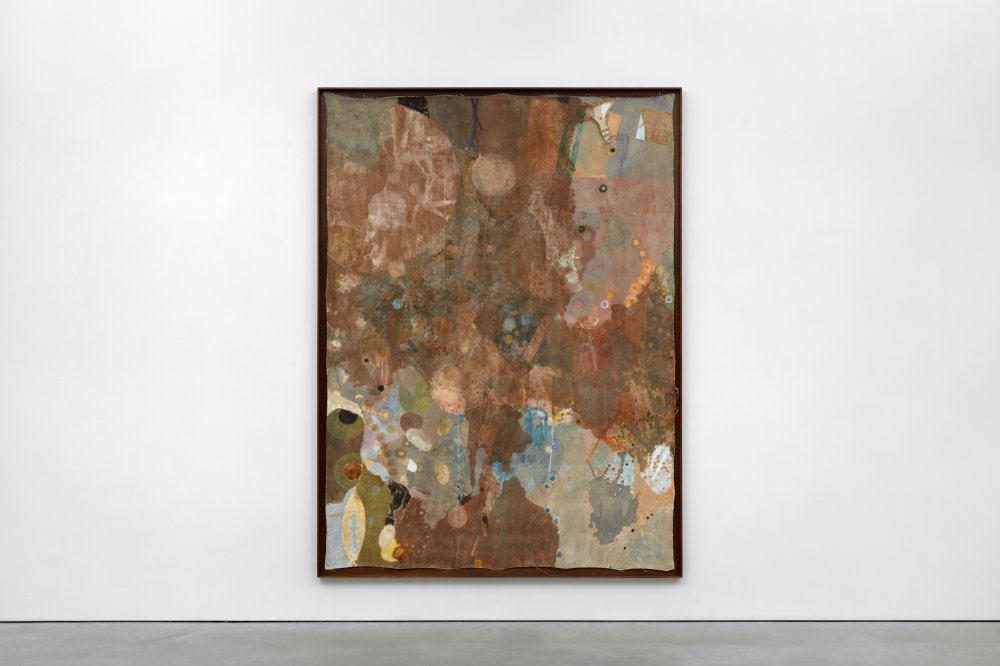 Justin Caguiat
to the approach of beauty its body is fungible, 2020 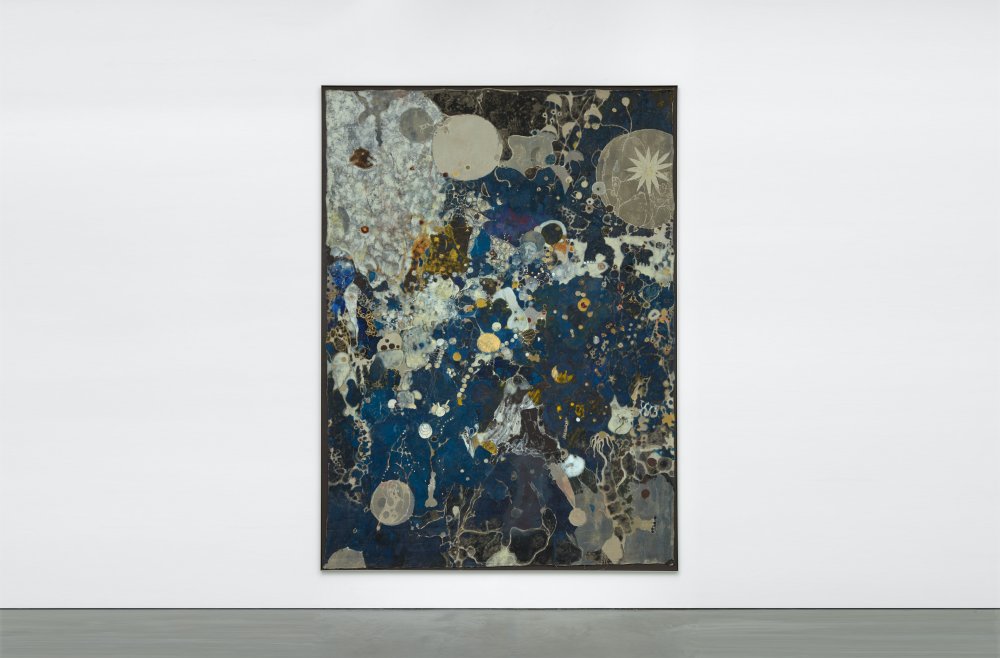 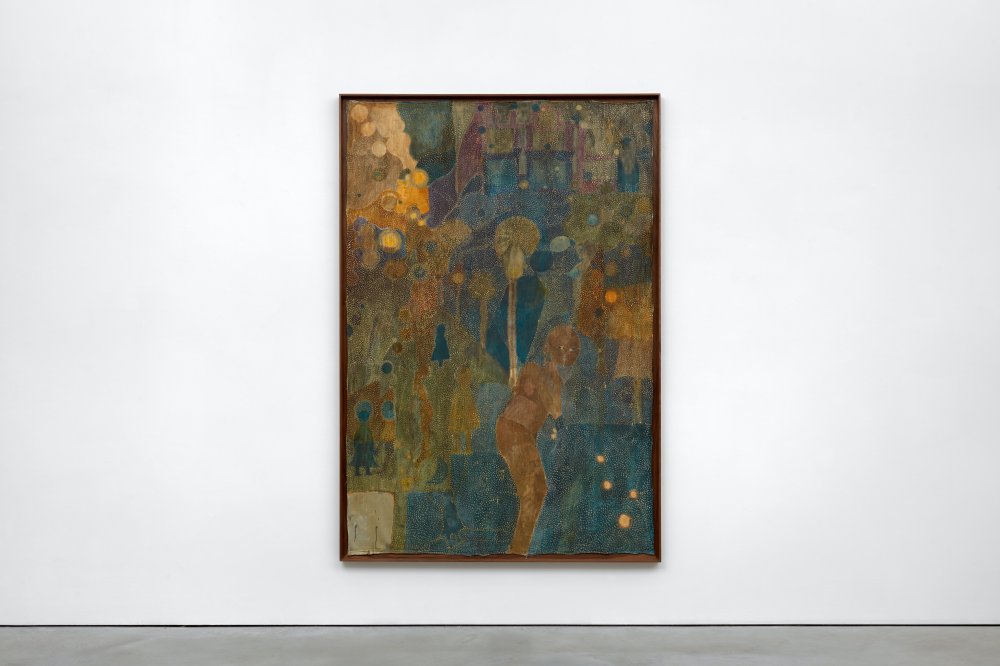 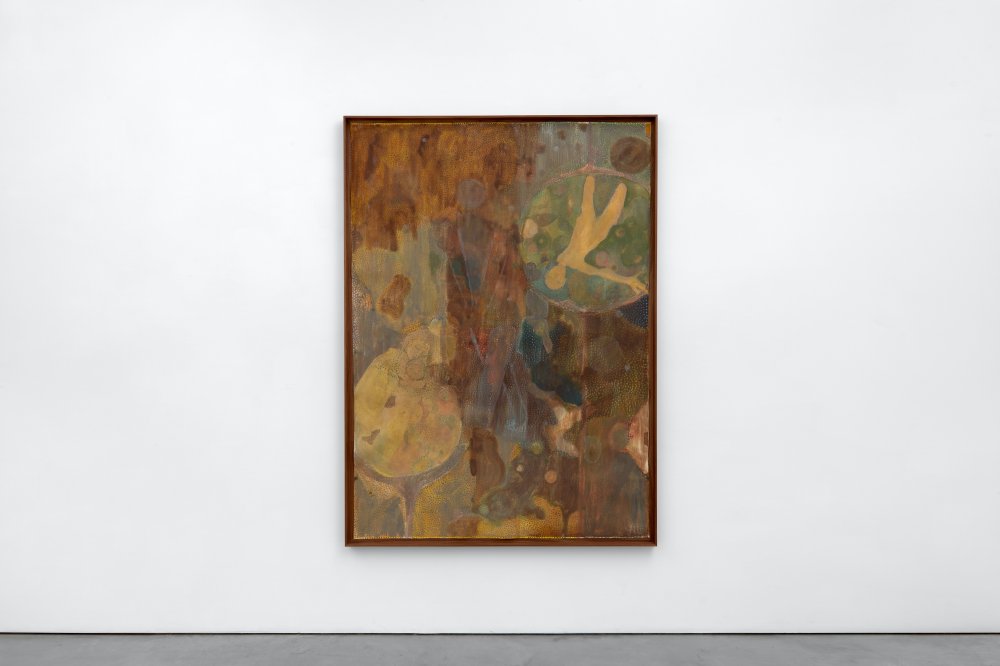 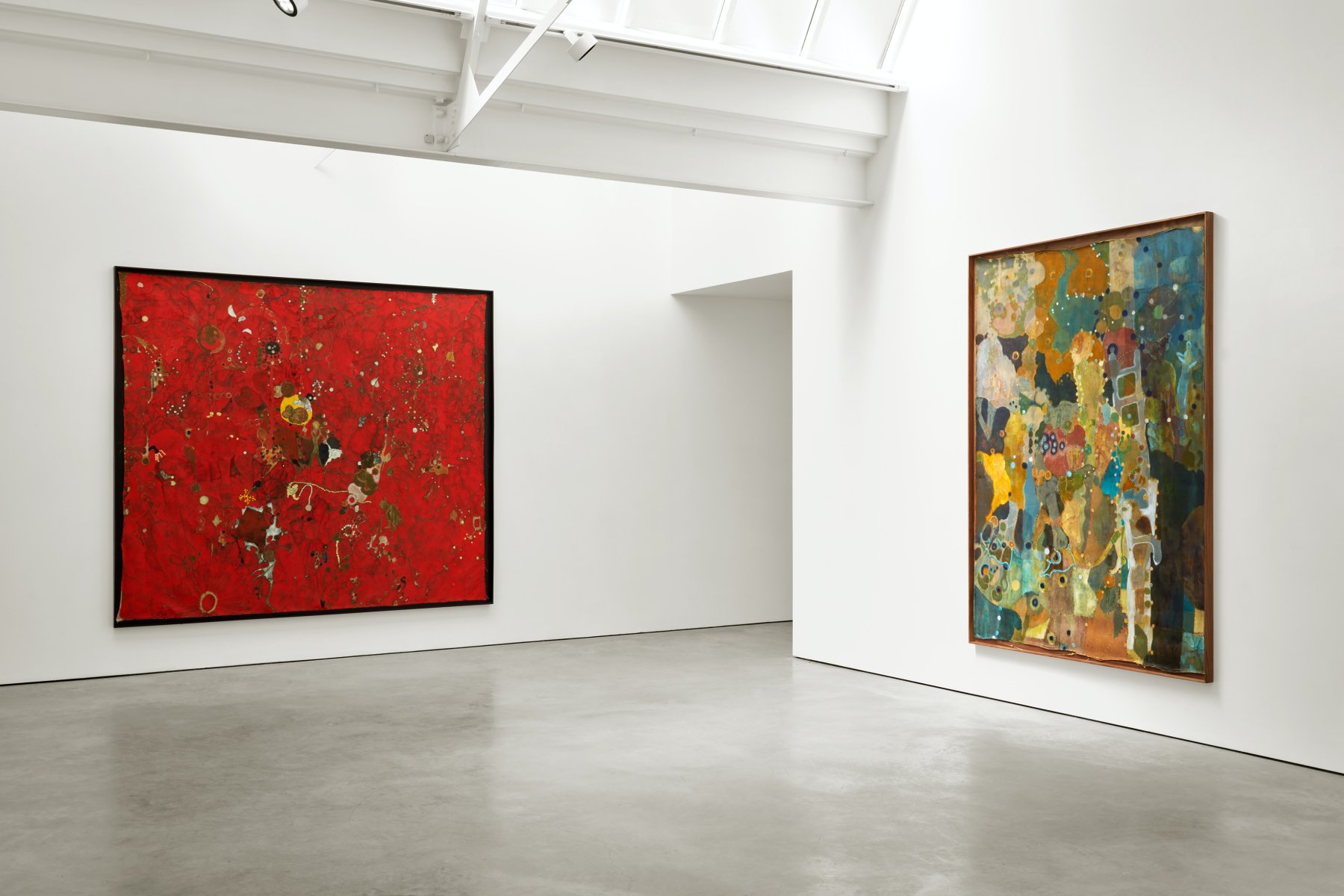 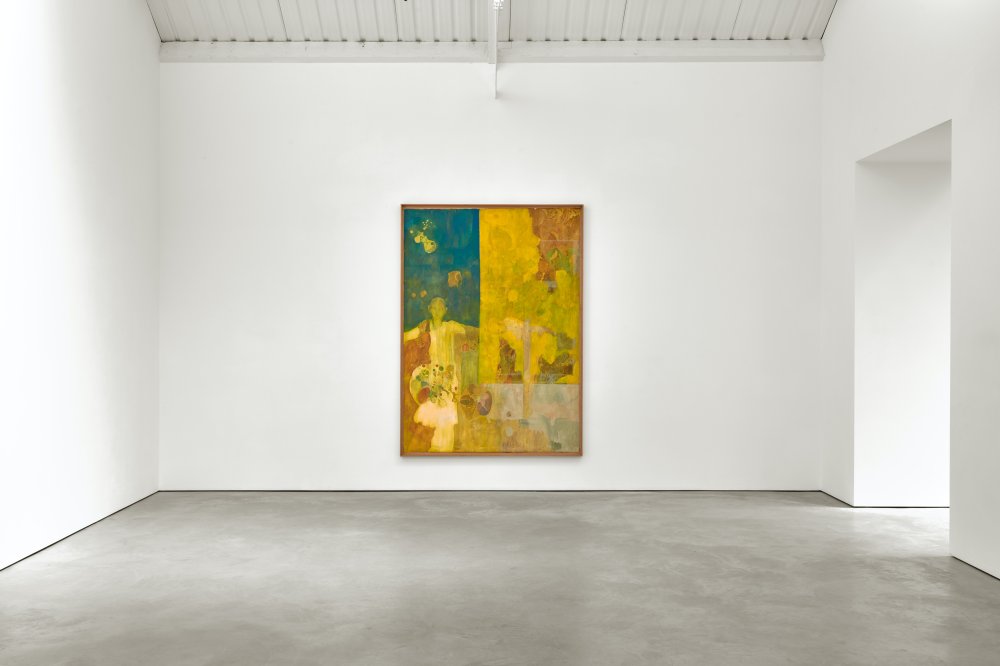 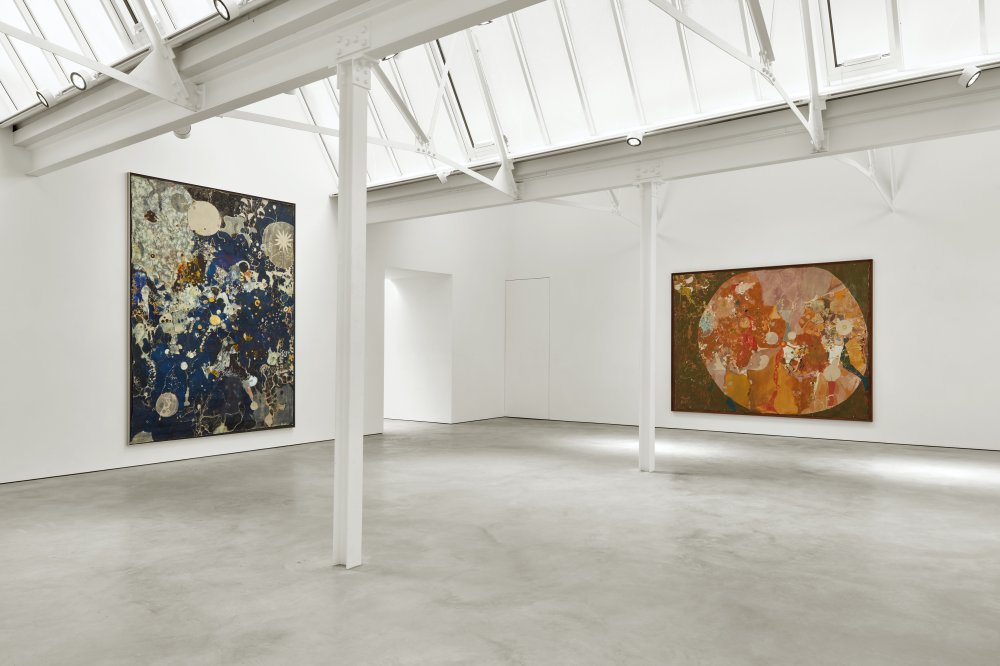 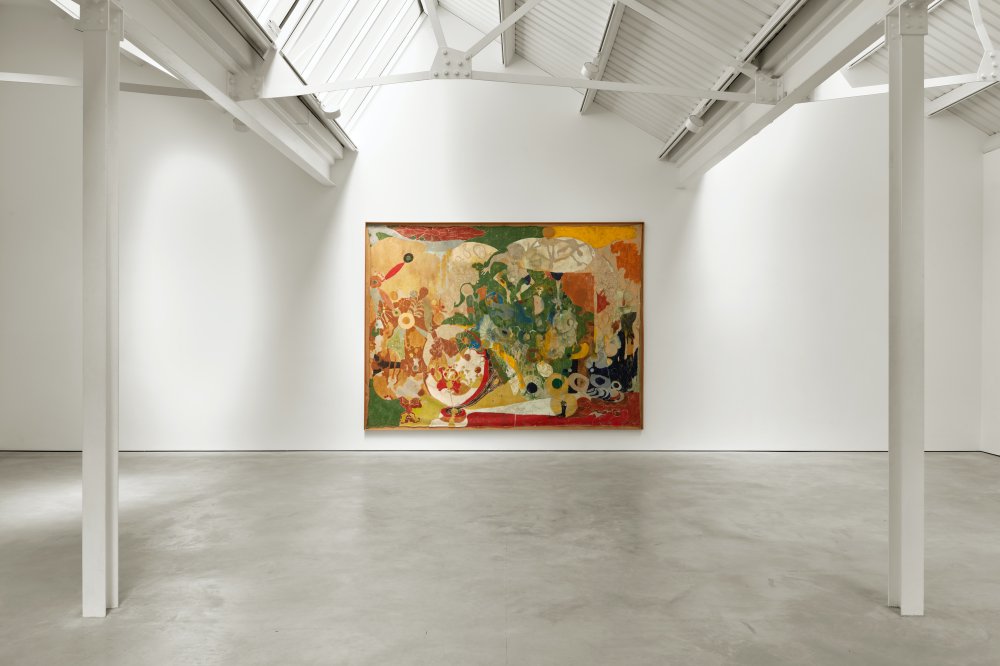 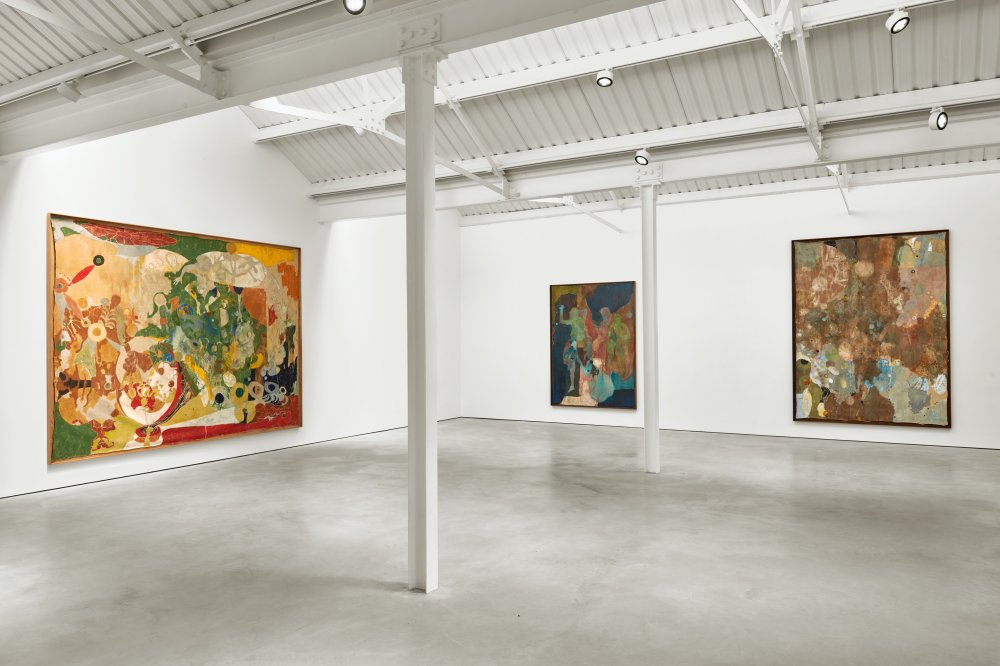 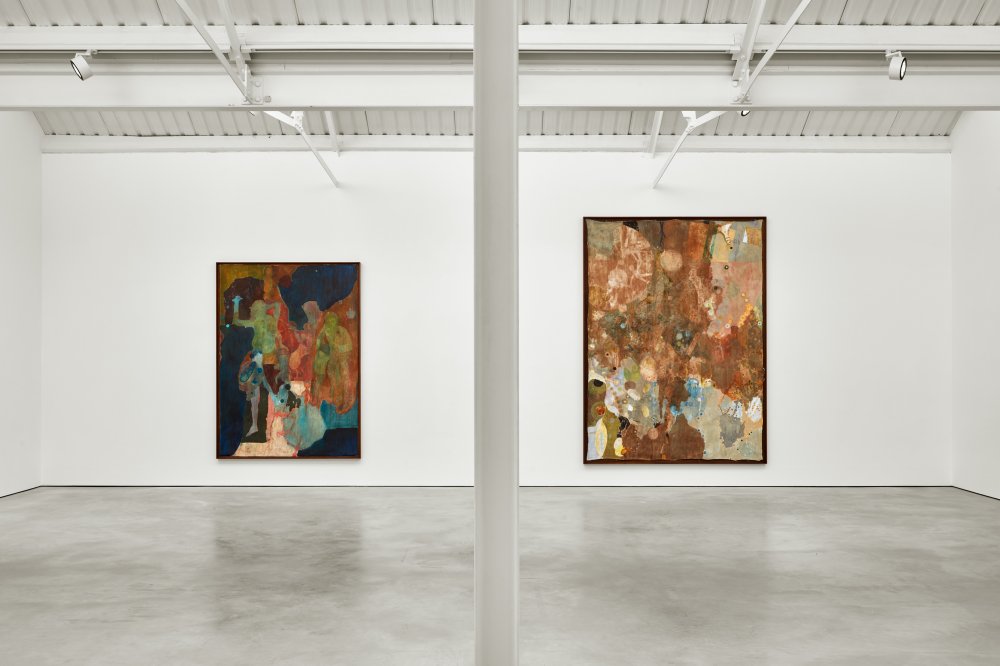 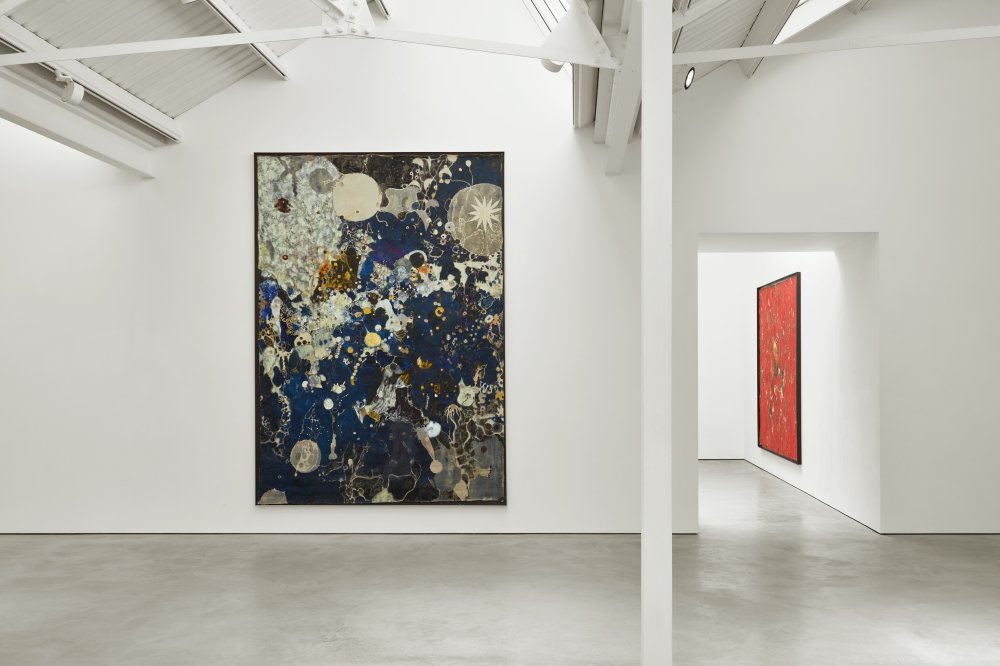 After the outbreak I escaped to the Bay Area with my family. We left New York and ended up crashing at a former youth hostel in downtown Berkeley an art collector had bought. It was under renovation prior to the shut down and was in the process of being turned into

I traded the collector a painting titled My meat is to do the will of him in exchange for room and board. In one of the rooms, by the side of the bed hidden between the bed frame and the wall I found a journal filled with observations written in fragmented prose, punctuated by drawings. I was so struck by the book that it ended up forming the basis of my work for the next three years. I used the drawings as sketches, usually as overlapping composites to layer and erase with paint, building up the surface over time, new forms emerging from the evolving intersection.

I compiled some excerpts from the found journal. Each entry in the book was titled, and I have borrowed each title for each painting.

​“Thousand Year Old Laughter“
He was a young lad.
He discovered a video store carrying a large collection of American and Euro films with religious themes. Other half of the store was
SFX Horror.
Lurking around the store… the instructions have unfolded a spell
Entranced by images of suffering grotesque eroticism
Fell into images forbidden the name is not what it appears
This way was truly nothing already it disappeared as smoking trails left by the things made seemingly in desires shape

solitary in fluid sunlight reflecting off store window eyes
that unsubstantiated the hollow form revealed another presence.
generating heat but not light and melting snow it turned into water,
we lived for 16 years in Tokyo.

​“Extraction and Compassion“
When Grandmother came to visit us from Manila she couldn’t be around the Japanese people. Only once she recounted to my mother the horror of the Japanese occupation of the Philippines

During the massacre of innocents
their favorite method of killing was the bayonet
The hotels in downtown Manila were turned into rape camps they would take women and girls there after they were forced to bury their children, siblings, and neighbors in mass graves
Hospitals were set afire after patients were strapped to their beds
Pregnant women were raped and their stomachs were ripped open with bayonets
Their unborn children drowning in sunlight streaming in from the broken walls and shattered windows
​“O you dig and I dig, and I dig towards you,
on our finger the ring awakes“

In our apartment in Tokyo she made a room for herself in the closet.
She was a devout Catholic, she could speak to spirits
She was the matriarch of my grandfathers second and illegitimate bastard family.
Grandfather died when mother was one years old, he played piano for the silent films and was a photographer
Mother was the youngest and 13th child.
when grandfather died, suddenly they were were poor; he had left them nothing

They lived in a tiny garage and slept on the floor in rows they moved dwellings frequently my
Mother often didn’t have enough food to eat. Her first job was cleaning public toilets

In Tokyo people always asked me if my mother was a maid
the echo of the occupation evolved with the diaspora after the colonization and military campaigns of the Spanish, Japanese, and Americans
The Filipina maids of Tokyo are the kindest most hard working people

When my grandmother died she left my mother her golden crucifix.
My mother later gave the crucifix to me,

They had a broken television in the room and the picture was in black and white. We would watch TV and my Grandmother was happy and said it reminded her of the past.

​“Branches Flower Windows“
walking down quiet streets of my Tokyo
I love the moss covered cinder block walls and overgrown gardens of ferns, parks and Shinto temples and under the shade of trees everywhere,
ponds and streams reflecting viridian glow, small waterfalls and stone pathways. Moss grows everywhere
Sleepy stray cats and small fields of dirt and wild grass. The hollows of bushes littered with the skeletons of cicadas at the end of summertime and in every apple lays a fetus curled asleep
There is no land more beautiful
fields of rice paddies from the train window on the outskirts of the city
the wind shakes and branches flower windows
personalities whistle out of these sectors of apples that are made to be regenerated

Ever-present crows calling from the trees, pockets of nature surrounded by hyper-evolved architecture and a totalized homogeneity.
Animism and fascism are alive and vital here, but now the Japanese are pacifists.

​“The Approach of Beauty its Body was Fungible“
Starting when I was 13 years old I used to sneak out of my house at night.
My older sister was secretly taking LSD everyday and going to school, an exercise in appearing to be normal while her mind pushed against the boundaries of reason
I would leave at around 1 in the morning after everyone was asleep.
Wandering around, sometimes walking as far as Shibuya or Harajuku or to an unfamiliar neighborhood
I would break into apartment buildings and go to the rooftops and sleep there.
I sleep in parking lots and in nooks in between buildings, hidden places underneath stairwells and behind ventilators and generators whole lifetimes of how we love the escape
Forgotten atoms cradled in sweet music and the laughter of our memory of the buildings dropping seeds

Its psychotic dream state remember waking up on the floor of the bedroom,
The walls and ceiling slowly began to shrink,
Shrinking to the point of a needle, the point was a pupil,
They were trapped inside the pupil, the pupil was the coffin.

Splash water on their face to wake them up, the knock on the head sent us reeling, I’m relieved to find him sleeping.
Its safe to be here while I was dreaming I kept forgetting I am living as todays reflection.

I was watching everything,
I was watching my body moving dislocated from its host,
I was moving from room to room like a fly on the wall, I was walking and talking like a living doll.

​“The Saint is Never Busy“
I cry because hes dying, now hes dust an older shade of green across my eyes turns to red dust of the heart. now how to keep out of hell are the wheels that are turning, he used to be so violent but now so enfeebled yet
His eye still holds violence, his other eye is blind and
He has to wear a diaper

The wheels of the sun its done but dont forget about its shadowy child,
For its picture you hate to keep
even though it always lives
developed the horror of an idea that wears you unrendered,
Its been 14 years
its paralyzed brilliant doors are locked forever,
out of waves of memories life times locked.

He looks old
He walks so slowly, he shuffles from room to room compulsively the dementia atrophied brain

He doesn’t remember anything about me. He knows I am his son but nothing else, no memories
I am a shadow in the periphery of his mind.
My mother hid the kitchen knives just in case

He thinks its the year 1999, a maddening coincidence to the primal year of my reveries.
I came to London and went to see him, who had returned to where he grew up in Wales

Of course it wasnt supposed to end like this
He refers to himself in the plural.
pointing to his head
Trapped in the year 1999, wandering amongst the reveries of whose youth?

We are in California now.
Its peaceful here. New York seems so far away. Here in the Bay Area there are lots of crows, whom I love. They remind me of Tokyo.
Our son dances in the sun and in the water
an ant to the outsider sea.

We have cut a silly figure against the walls
crumbling cake with all our bags
A cigarette in my mouth
my hat is lost against the orbing sun
the light is confusion.
This is my last song you yell across
laughing after the pale band where you removed your golden ring.
The sun is chasing your tanned skin
your fingers fan across the buildings in the sand
optical trails waving against their warped angles

A huge mob of crows, in the early hours of the morning on the way back home, that sent me weighing sleep against a walk around the block
I turned away and fled as they knocked over the trash cans,
The contents strewn like intestines on the street, nourished by the abundance, crying in unison