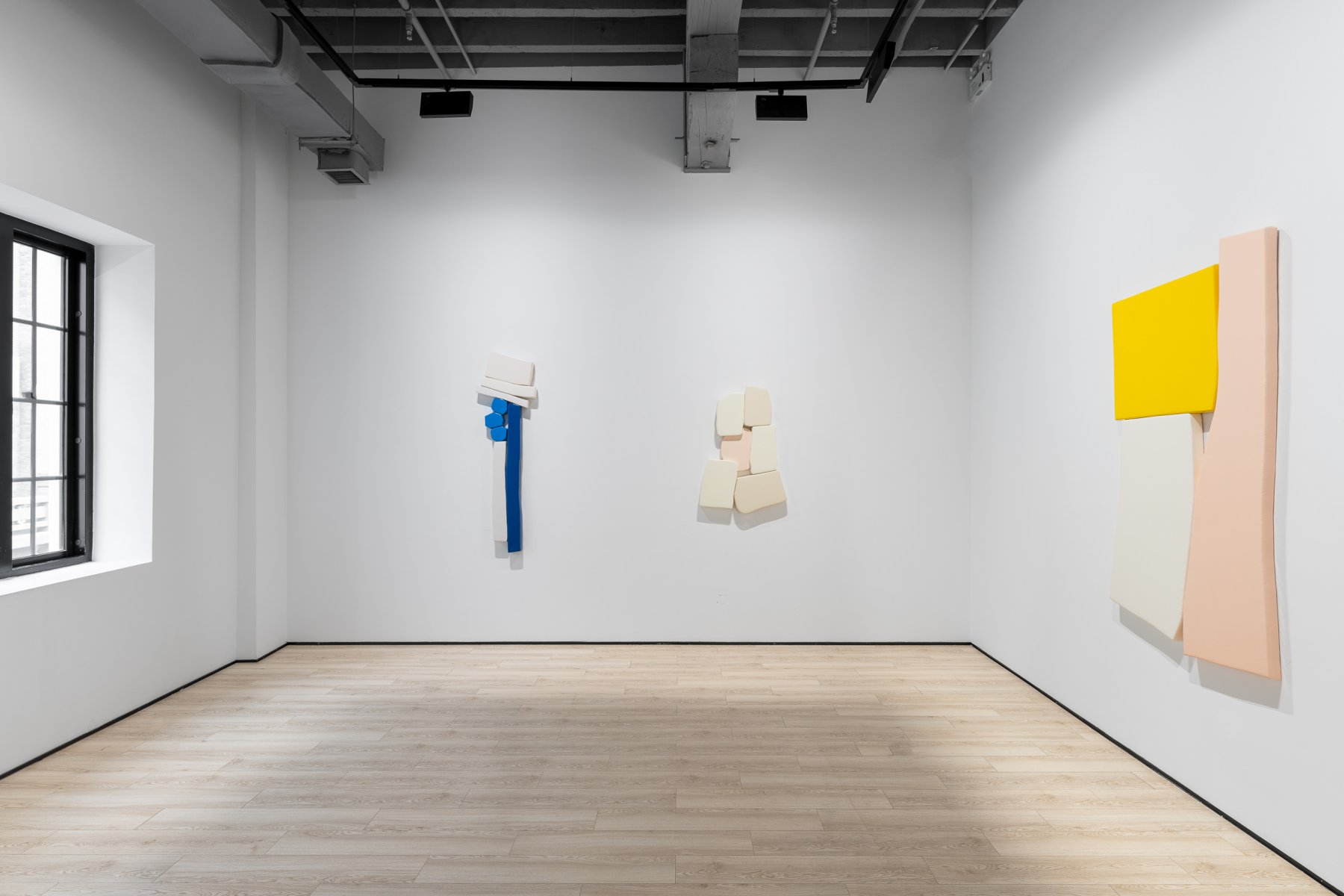 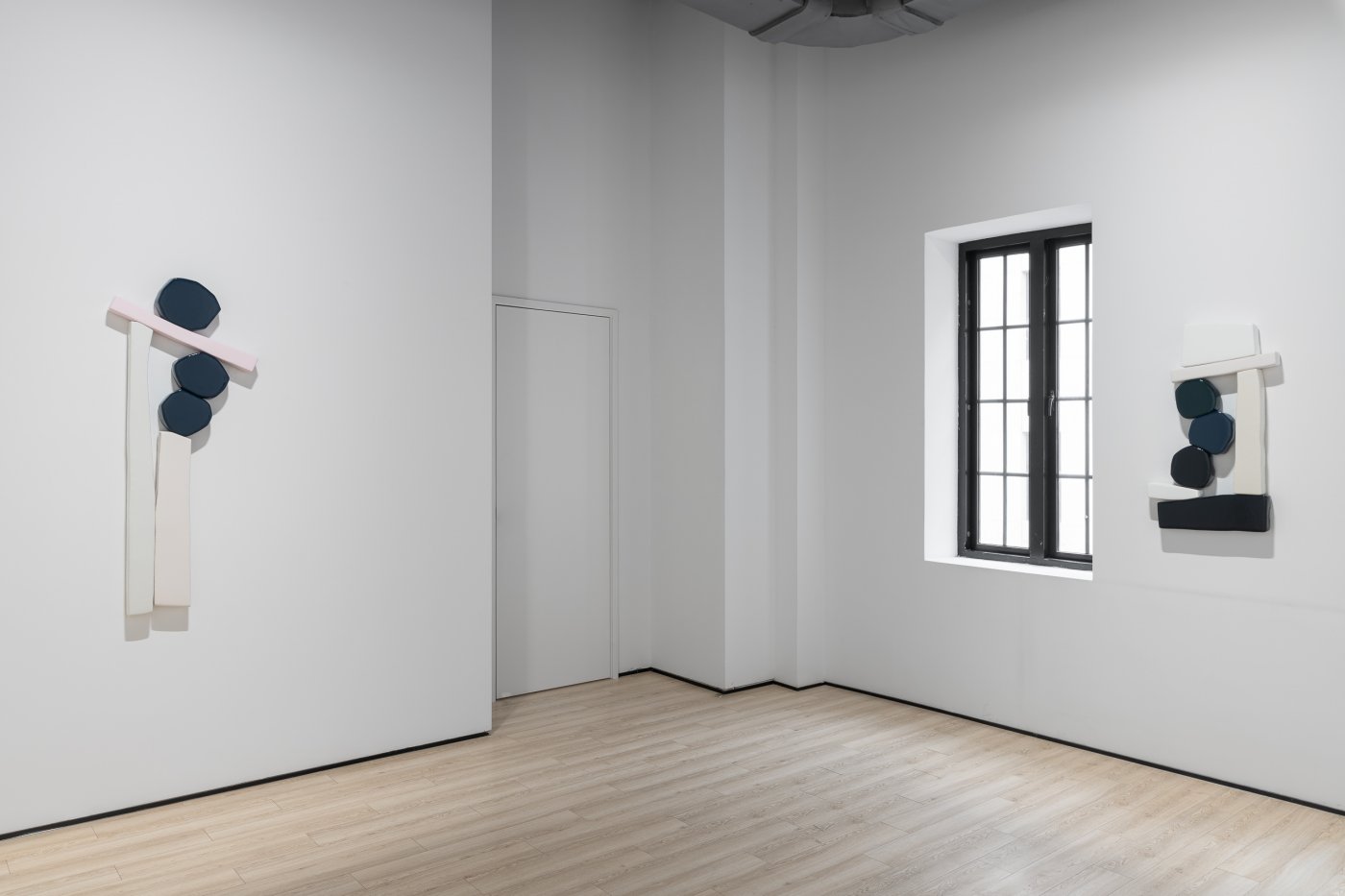 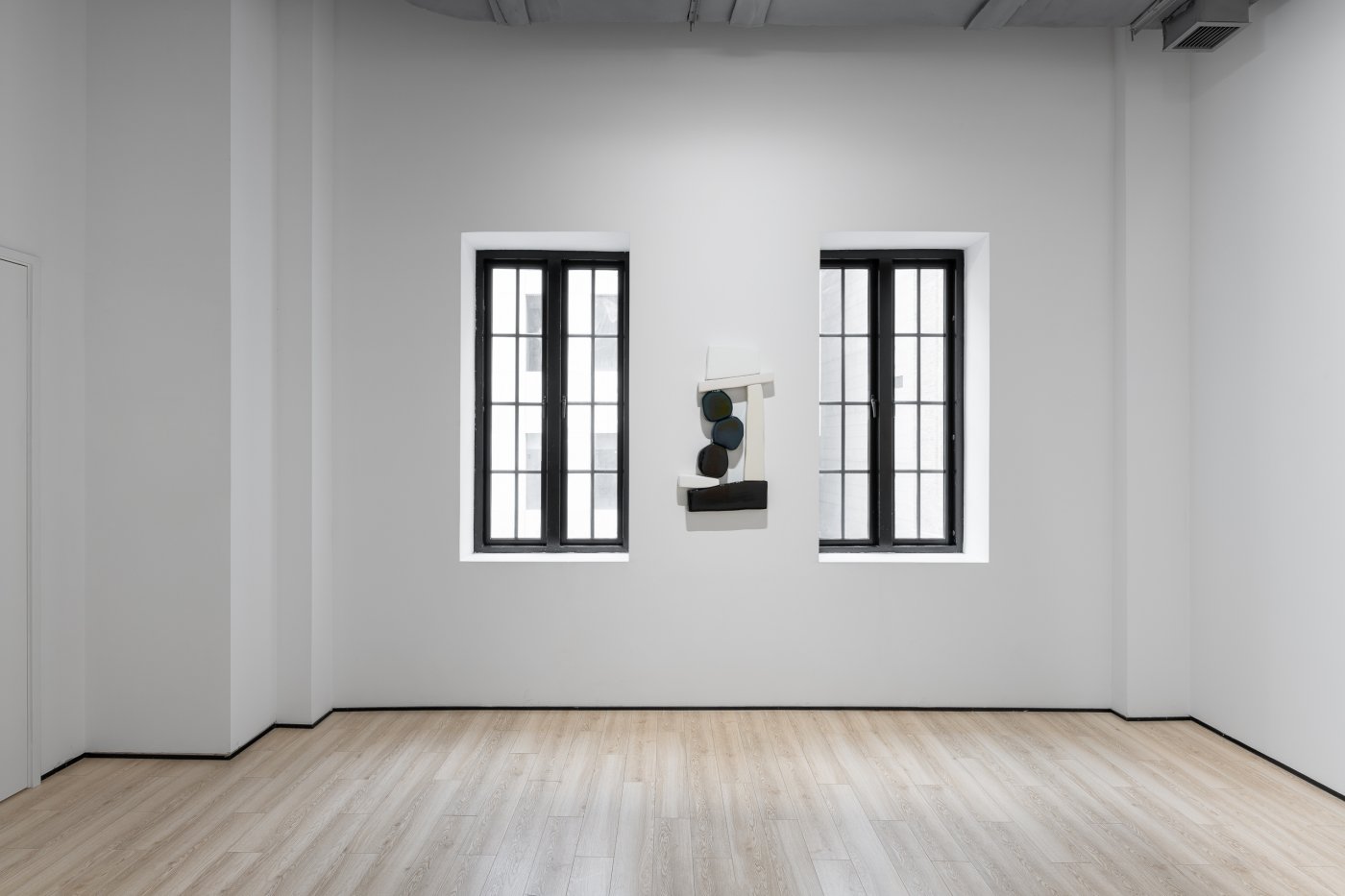 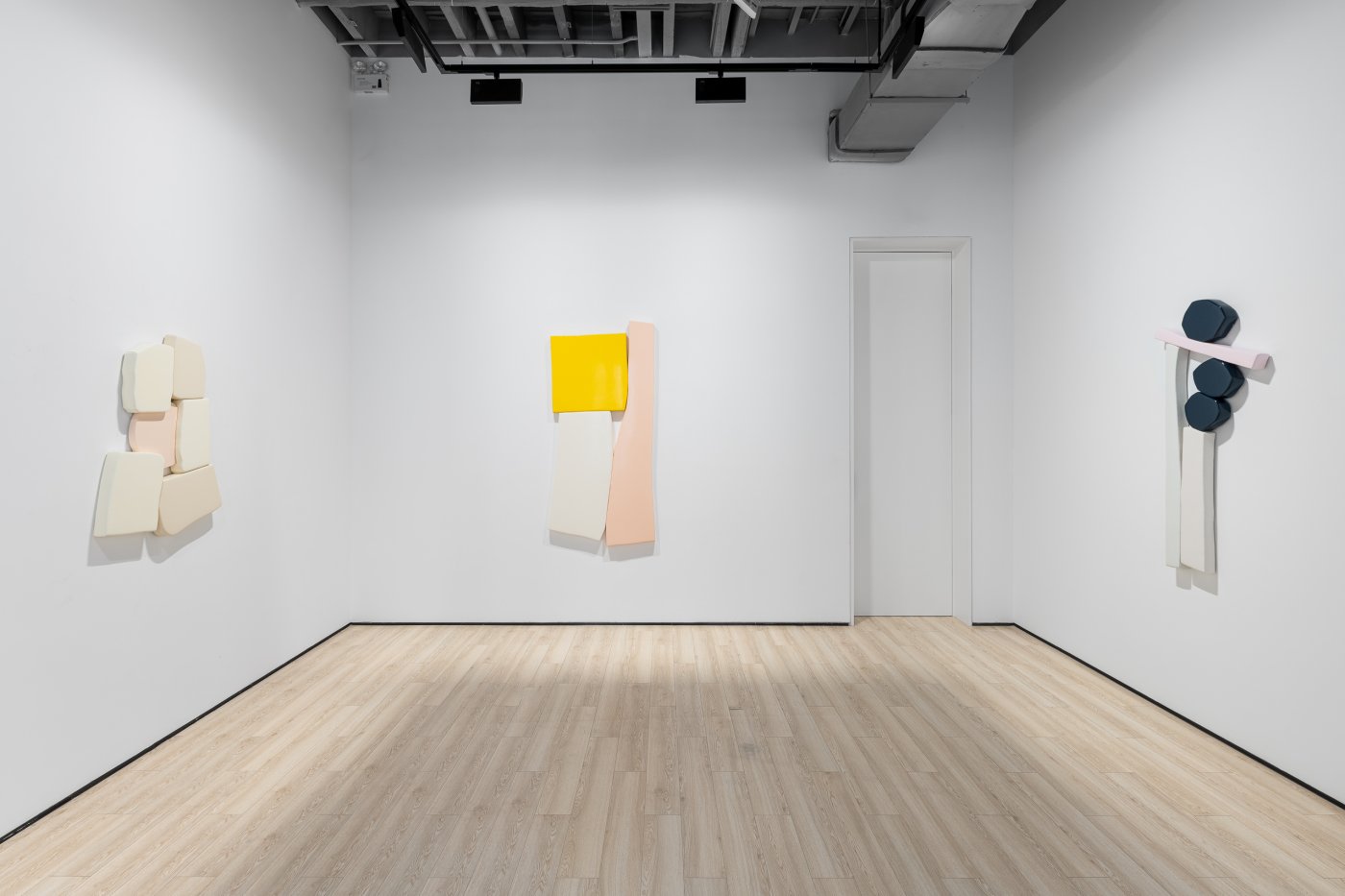 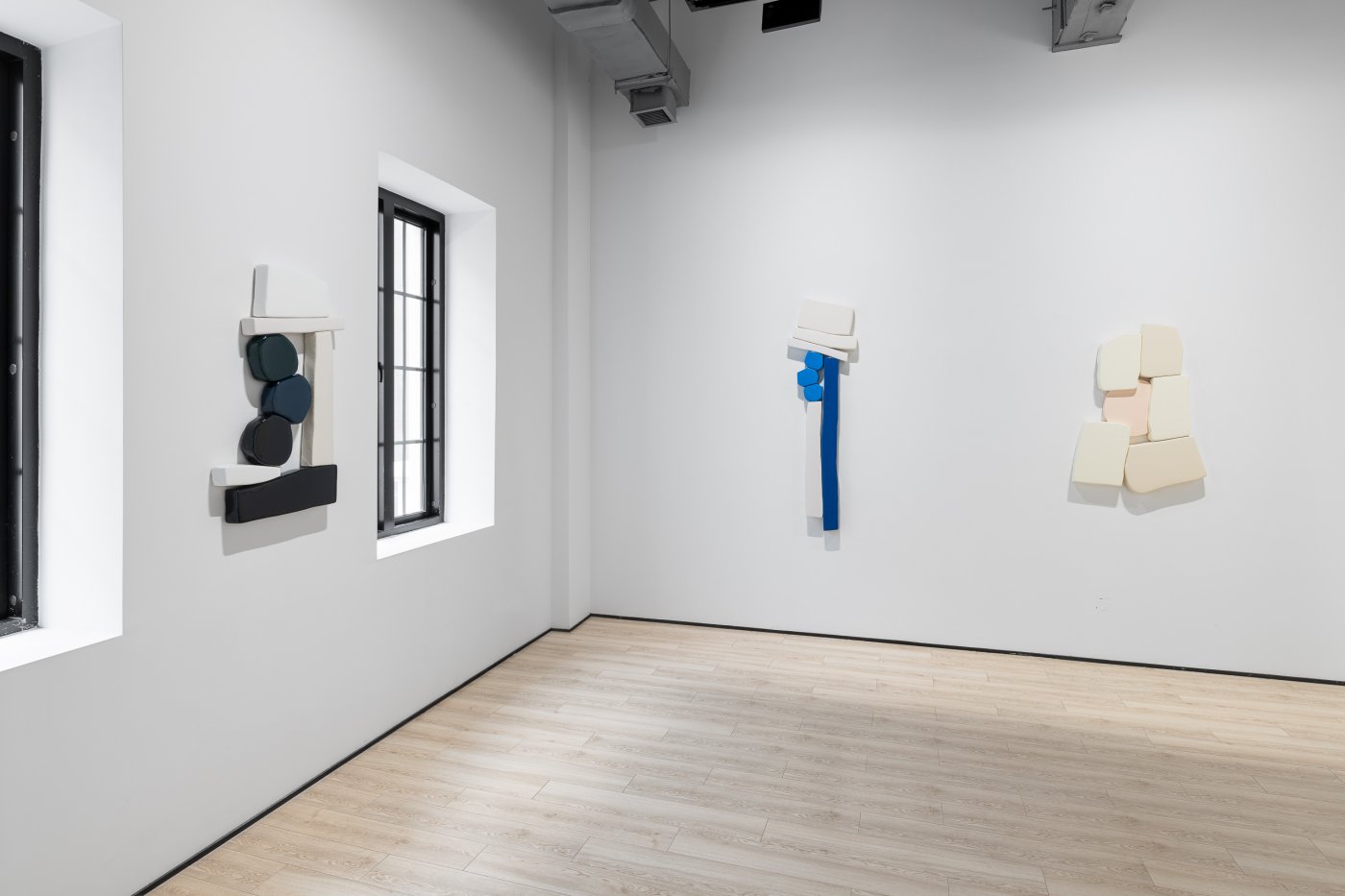 Is it sculpture, or is it painting, or is it something else entirely? This is the question that seems to naturally shadow the conversation surrounding Justin Adian’s provocative work. In Tipsy, Adian continues to plumb this liminal territory with works that quite physically reside on a tilt, staunch in their sly and playful refusal to firmly alight on one side or the other.

The sense of unbalance in these works is compounded by their verticality; there is an innate, oblique figurative reference in these pieces, which hang tall and flush to the wall. But the mysterious, organic forms of their composition confer upon the works a more ancient quality, as if we were witnessing a cairn marking the way upon a trail, or more pointedly, perhaps a totem marking that suggestion of corporeality.

Working in his signature style, Adian conceives of his individual objects through an elaborate drawing process that includes sketching first on paper, and then cutting his shapes from three, layered pieces of plywood. He sands, saws, and hollows out the wood in what he considers a continuation of this drawing process, albeit one that manifests through the use of hand, tool, and physical labor. From there felt is stretched over the shapes and then covered again by canvas. The forms can only come together in one way; Adian assembles them as they were dreamt of in his mind’s eye. The underlying felt gives the shapes their softness, a plush quality that bestows the viewer with an irresistible urge to touch. The perceived cushions of the work, like a soft pillow or the curve of a cheek, long for caress. This conjuring of pillows or skin provokes an acute compassion, and nurtures an intimacy between work and viewer that is profoundly humane.

With echoes of the work of John McCracken or Robert Morris in their refusal to commit to one medium or another, the “tipsiness” of these three-dimensional paintings is evident in their construct. Both Across the Line (2022) and Staying Put (2022) are notable for their Jenga-like configuration of mismatched shapes. In the former, a duo of skinny buttresses underpin a pair of circular shapes, which in turn hold up a slanted platform. Atop this wobbling tower sits one more ball, poised as if it were about to roll from the structure, and possibly topple it all. In the latter, two slender, pillar-shaped forms seem to support three precariously stacked orbs, which themselves bear the load of three horizontally laid, slab-like objects. In considering Adian’s roguish construction, we know intellectually that the forms hang united on the wall, and yet there’s a fanciful, but powerful, impression that it could all be knocked over with a feather.

On first glance, both Empty the Sun (2022) and Hardscrabble (2022) feel sturdier. The boxy elements of Empty the Sun nestle against each other, as if in an embrace. With its wide, irregular rectangles engulfing a sphere at the center, the muscular composition of Hardscrabble belies the uncertainty of its title, a rough-and-tumble term for the struggle of labor. Upon deep reflection, we appreciate the tenuousness—and tenderness—of the forms holding together. Whether the center can hold is a question that underlies all art, and indeed, humanity.

Almost Too Much (2022) also dances on a threshold. Three circular shapes and a slim pillar again support two bulkier, top-heavy objects in an arrangement that seems as if it all rests upon a cushioned plinth. Adian allows space in his work for temporality to exist. The viewer regards it with anticipation; the off-balance sensation of three tremulous balls possibly holding a bit more than they can bear is tangible. Likewise, his cunning gesture to the pedestal, the workaday structure so intrinsic to the display of art itself, is another instance of the artist at play. He once again gestures to the question we began with: is it sculpture or is it painting, or is his work something else entirely? The viewer looks closer, resists the urge to touch, and is drawn ever deeper into the chimerical mystery of Adian’s guileful work.

Justin Adian (b. 1976, Fort Worth, Texas) lives and works in New York. He received his BFA from the University of North Texas and an MFA from Rutgers University. His work is included in the permanent collections of the Dallas Museum of Art, the Modern Art Museum of Fort Worth, the Bowdoin College Museum of Art, and the San Antonio Museum of Art. This is his third solo exhibition with Almine Rech.