Hollybush Gardens presents a solo exhibition of recent works by Jumana Manna. Expanding on the artist’s ongoing enquiries into the complex relationships between bodies and their environments, the works on view recombine archaic and archaeological fragments together with components from an indeterminate future simultaneously in construction and falling into ruin. 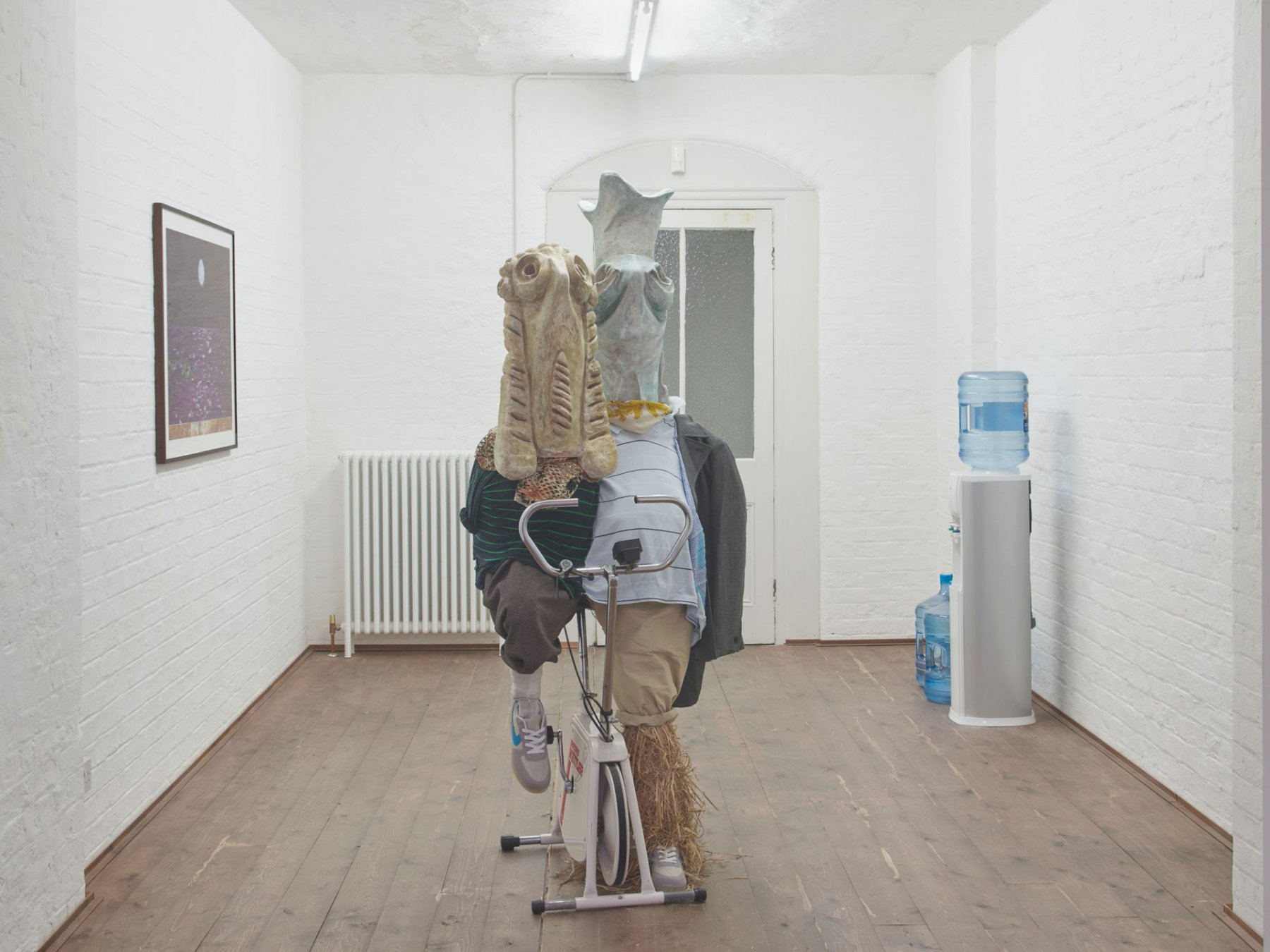 The works on view derive from a significant body of work first shown in 2019 at Home Works 8 in Beirut, in a collaborative installation with Haig Aivazian. Titled The Setting of Noon, the exhibition was staged as a disused office, at once outdated in its compartmentalisation of business and leisure, and futuristic in its dystopic work-from-home character. Complete with a waiting area, a reception desk, ergonomic office chairs, glass cubicles, LED tickers and corporate art, the installation explored the notion of fertility as a central motor traversing time, from pre-historic agrarian societies to contemporary financial economies.

The installation imagined an unknown group of people who take refuge from global regimes of chronological standardisation, resource extraction and their labour patterns. They reorganise the office space, turning cubicles into glasshouses for plants, huddling around a water cooler after the nearby river ran dry, and reviving ancient rituals to imagine new social formations. Tongue-in-cheek in its amalgamation of new age, vaporwave and retro-futuristic design, the work is also dead serious in its premonitory diagnosis of the historical origins of society’s present and future ailments.

The figure of CFO (Chief Financial Officer; 2019), re-staged here, is a cross between a double- headed ancient fertility god and a suited office worker. Mounted on an exercise bike donning a blazer and knock-off Nike trainers, the scarecrow figure embodies wellness and multitasking efficiency; it conjures rain to irrigate shares and ward off pestilence, at the same time as it trades toxic assets and monitors the opening and closing times of various stock markets. The figure is accompanied by Pedestals (2020), a set of diminutive furniture of ambiguous use—up- holstered plinths for jewellery display, knee pads for worship or gym props. They are part of The Setting of Noon’s upholstered chair-sculpture permutations that explore the role of furniture in organising systems of value and bodily dispositions.

Also on view is Corniche (2020), which belongs to a series of collages of imaginary landscapes composed from meticulously cut nature-themed packaging of household cleaning products, formulas that use synthetic chemicals to conjure idyllic imaginations of nature through scent. Playing on the landscape genre in the tradition of Western painting, Corniche presents a night scene of a view over a polluted body of water. This mysterious landscape seems unfixed in time, evoking both a past sullied by humans and a future abandoned by them.

About the artist
Jumana Manna (b. 1987) lives and works in Berlin, Germany. She was awarded the A.M. Qattan Foundation’s Young Palestinian Artist Award in 2012 and the Ars Viva Prize for Visual Arts in 2017.