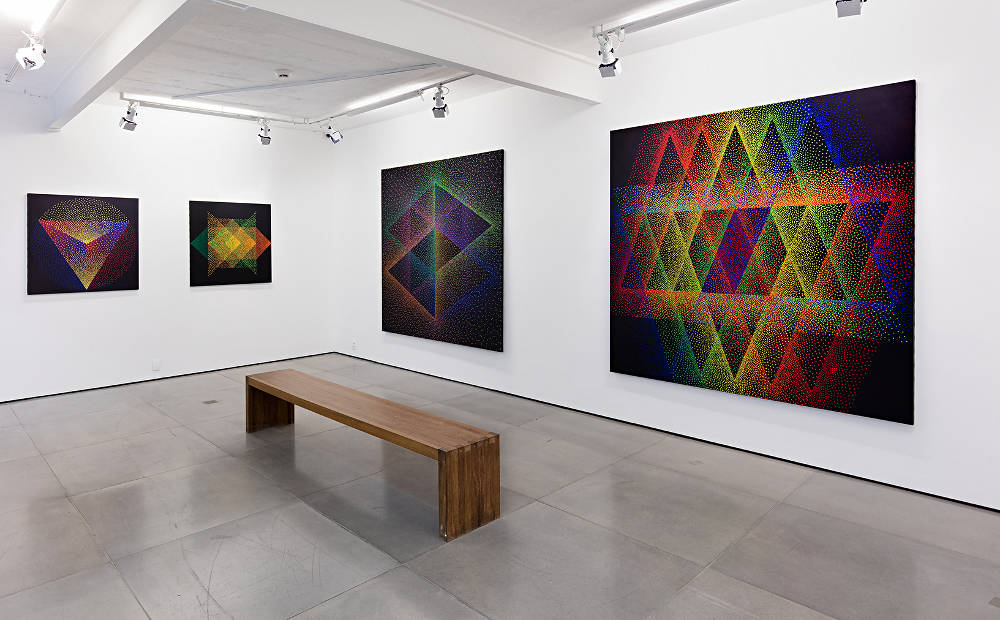 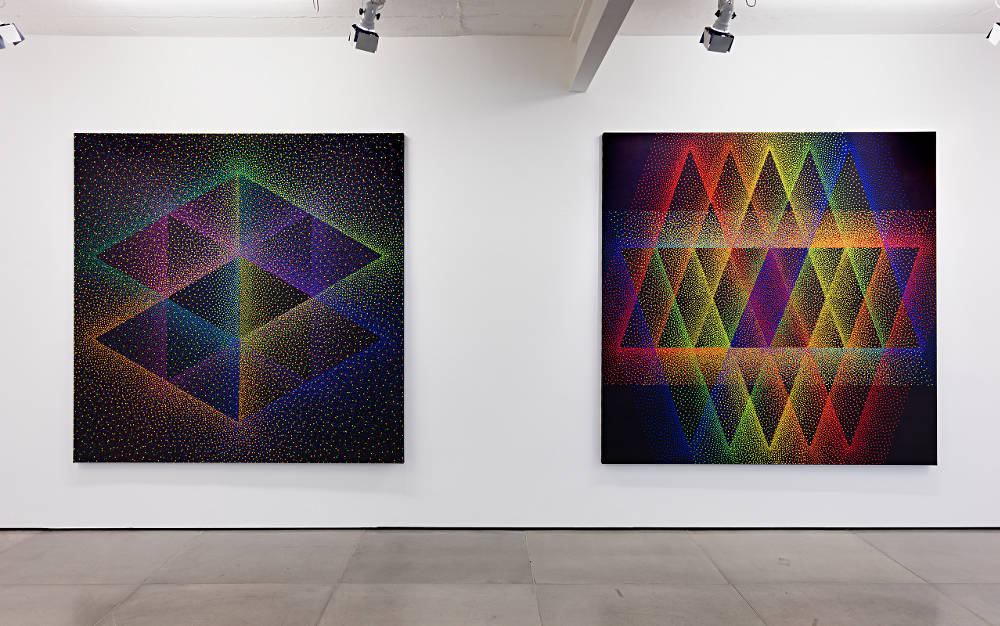 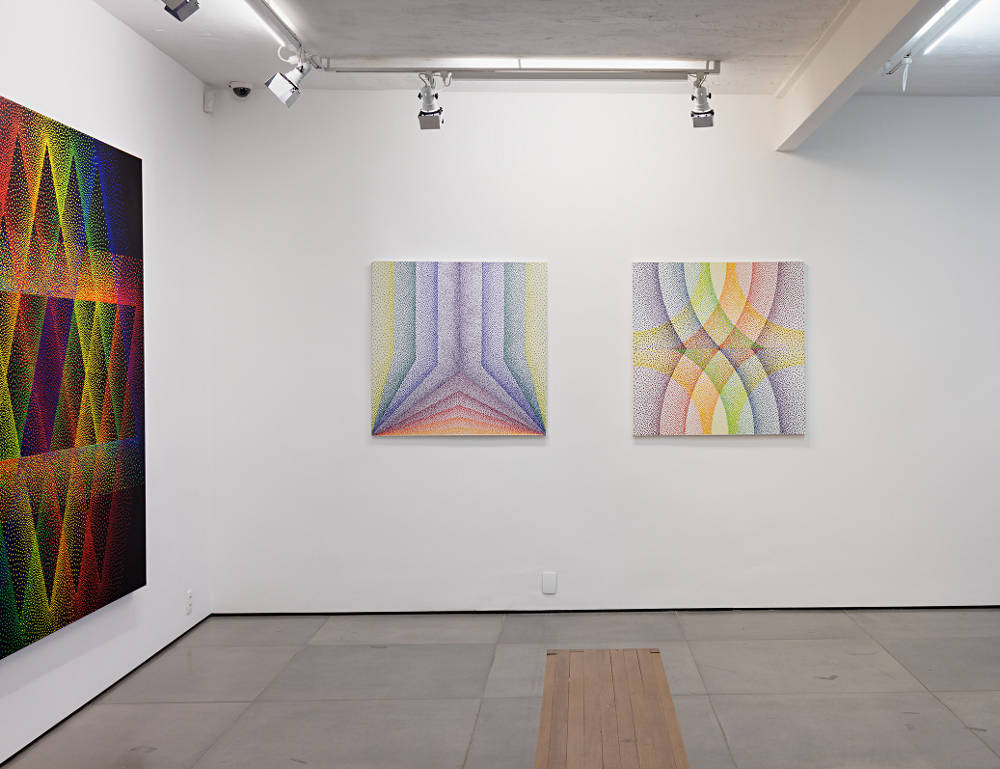 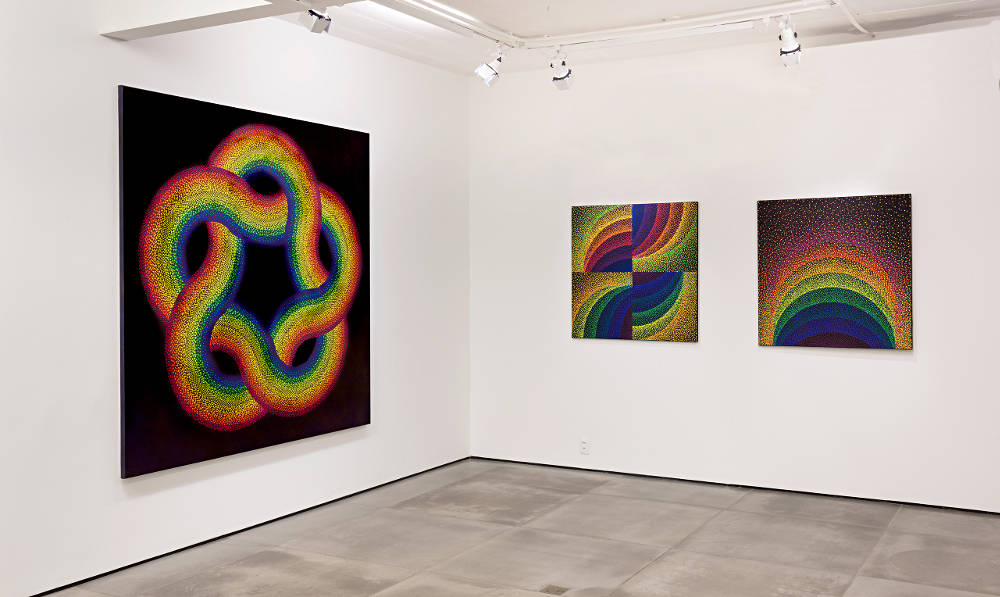 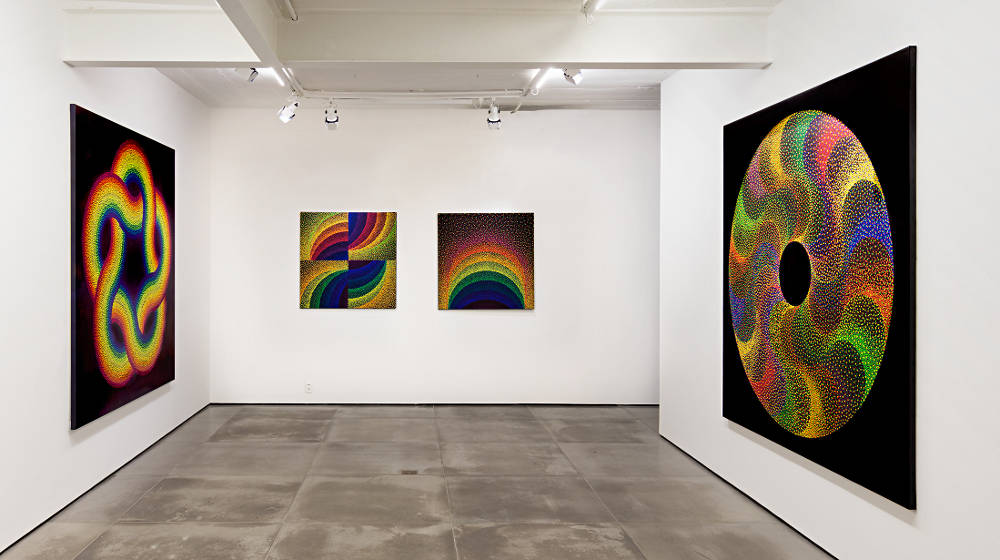 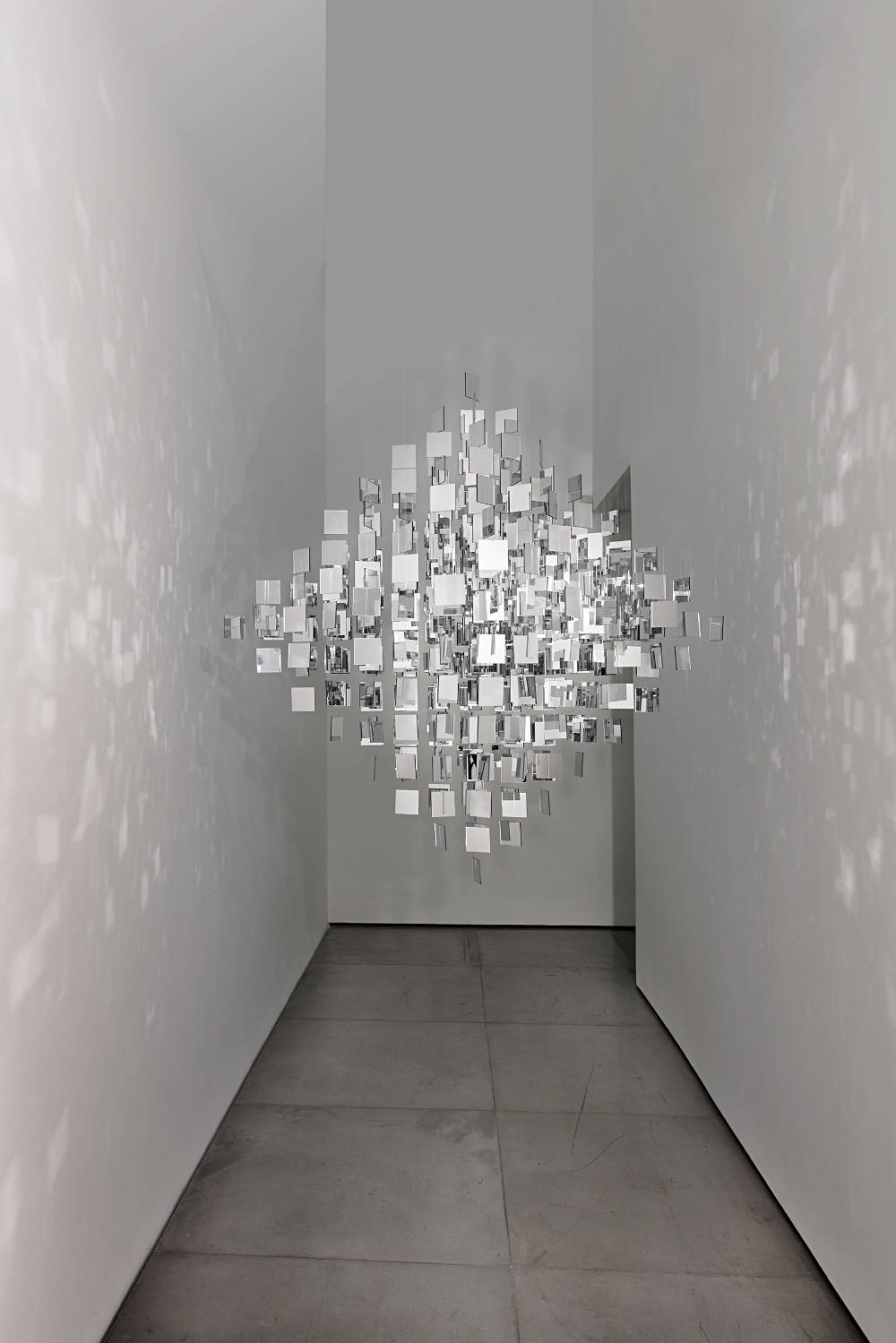 Accompanied by a text by Rodrigo Moura, the exhibition features new paintings from the Alchimie series, a sculpture from the Torsion (2004) series, a mobile from the Continuel series, and Alchimie Virtuel, with technology that allows the spectator to enter the artist’s universe. This work, in virtual reality, updates the question of virtuality that Le Parc has been exploring for more than 50 years, including in the paintings Réels et virtuels / series Surface noir et blanc (1950s), Volume Virtuel (1970s), and the sculptures Cercle Virtuel (1960s). By anticipating this discussion, Le Parc became widely recognized as a visionary.

“Resuming contact with Le Parc’s works and ideas as he turns 90 years old is an opportunity for reactivating this belief in the emancipatory role of art – today without the dogmatism that ruled his initial ideas from within the kinetic art group – in the hope that it brings an opportunity for transformation”, writes Rodrigo Moura, in the text he wrote for exhibition.

The current “alchemies,” in acrylic on canvas, are large-scale works, conceived based on various stages of drawings and smaller paintings that are expanded in progressively modified compositions. “In some paintings we see a large black center which, surrounded by an overlapping of grouped and overlaid colors, appears atomized, giving rise to a simultaneously disorienting and hypnotic effect,” says Le Parc. The Alchimie series was begun in 1988, in the form of small sketches that arose based on chance observations by the artist, which were gradually realized. “These “alchemies” are part of my living adventure, expressed in my work as an experimental artist,” Le Parc says.

In Torsion, the artist reaffirms this persistence in a continuous experimentation, in which each new set of artworks is rooted in what has been previously developed. The series of sculptures – which in monumental sizes occupy public spaces of countries such as Mexico, Portugal and the United States – is linked to the spirit of his first reliefs, especially the “virtual volumes” developed in the 1970s. Even though the artworks in the Torsion series are not virtual, but real with the striking presence of stainless steel, this material, by its satiny surface, allows multiple changes due to the way it attracts light. The investigation of the effects of light on the surface of bodies in movement can also be seen through the hypnotic effect of his mobiles, represented in the exhibition by the specimen Continuel Mobile Miroir (2017).

Julio Le Parc (b. 1928, Mendoza, Argentina) lives and works in Cachan, France. The artist presents the spectator with a fun and demystified view of art and society through his perceptually illusory paintings, sculptures and installations. Le Parc makes color, light, shadow and movement interact in a way that makes the shapes seem to move, solid structures to dematerialize, and light itself to appear plastic. As a cofounder of the Groupe de Recherche d’Art Visuel (GRAV), he worked to break the limits in art, and the participation of spectators directly contributed to his famous kinetic sculptures and light environments.

From the 1960s onward, however, he began to develop a series of different works that used “milky” light: these objects, generally constructed with a lateral source of white light that was reflected and broken up by polished metal surfaces, combined a high degree of intensity with a subtle expression of continuous movement.