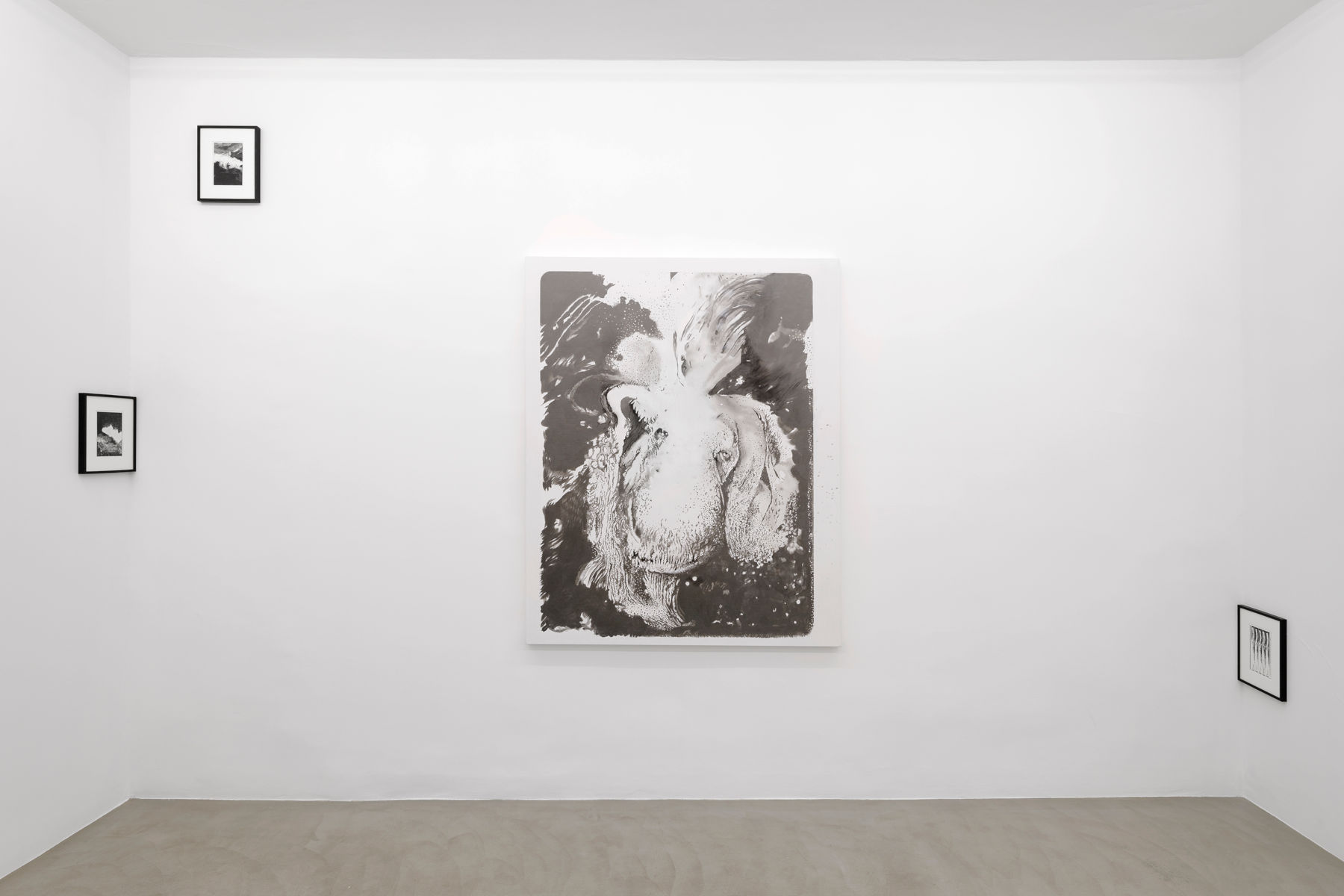 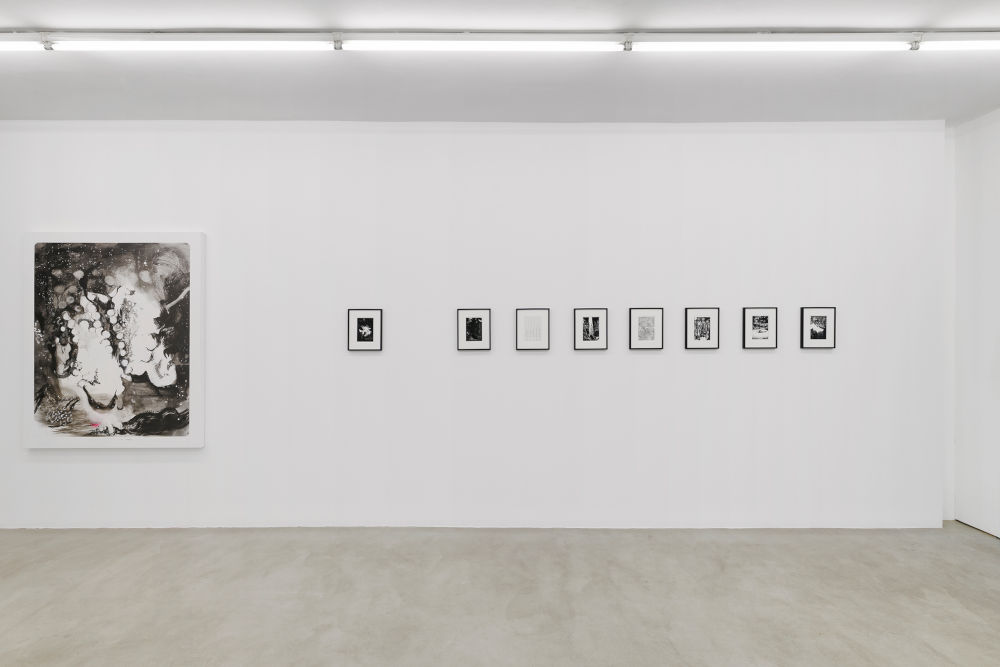 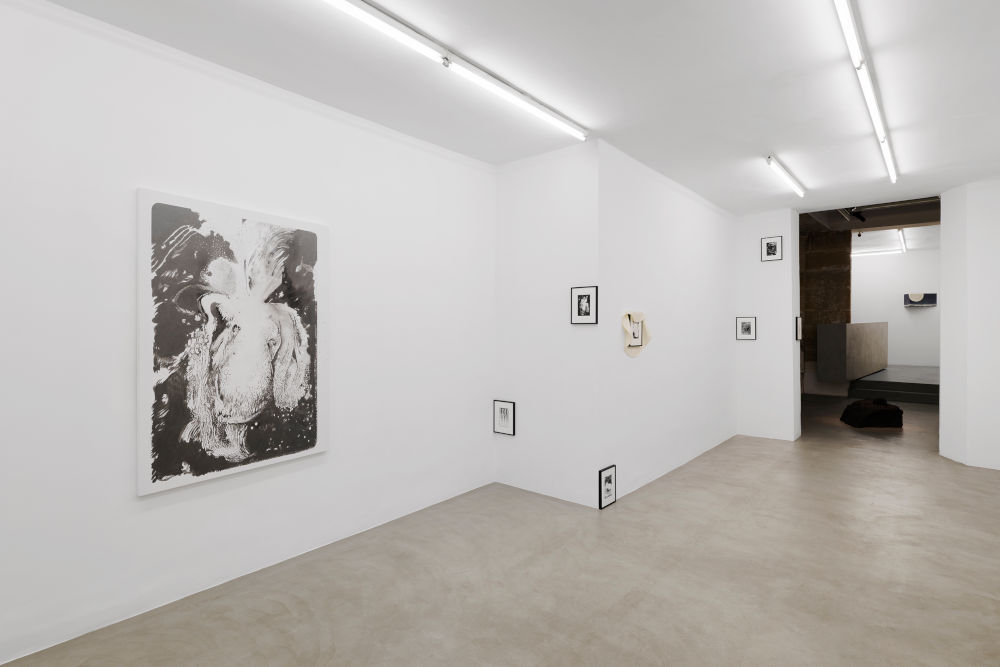 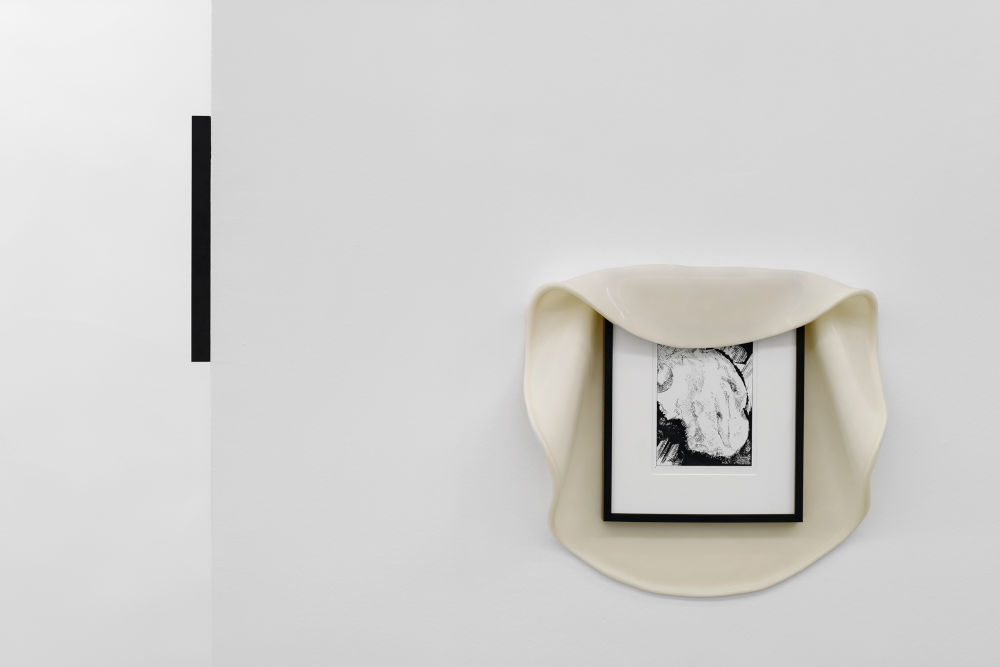 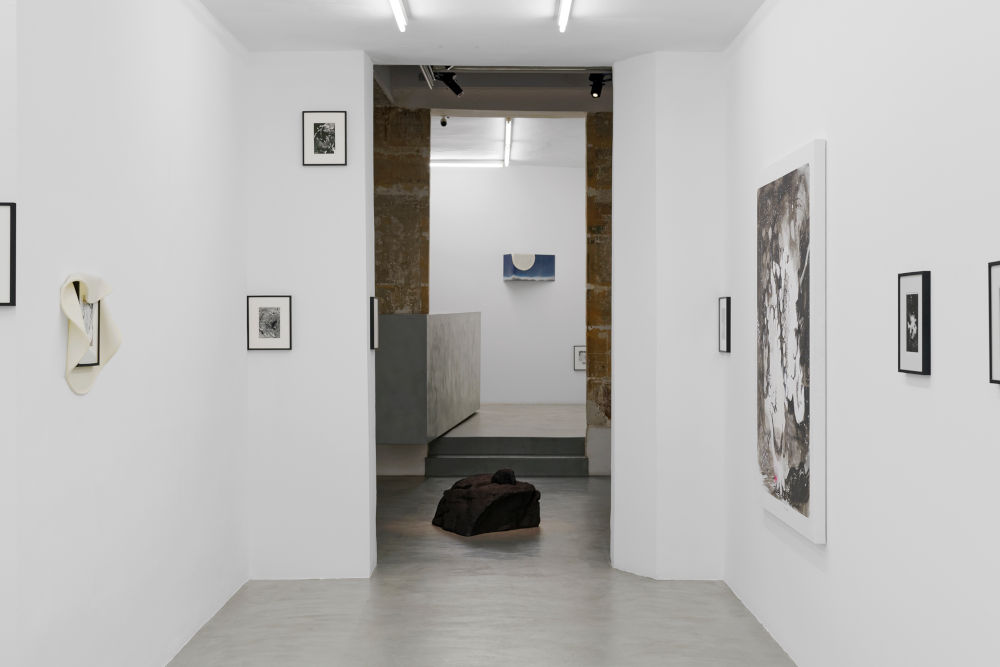 The drawings that make up Julien Tiberi’s Symphonic Lava series are to be envisaged as a dreamlike and mind-blowing rush through “a four-second timeframe, stretched out over 96 scenes.” The erratic world of Symphonic Lava unfolds in a perilous universe of instability. In a state of disorientation, one wanders from an inhabited crevasse to a desolate void and distinguishing the living from the inanimate is not an instinctive act. The artist retains shreds of reality that he extends into the supernatural. The sensual magma of blackened paper that makes up Symphonic Lava invites us to experience all this and so much more.

In the spring of 2018, Julien Tiberi was invited by the Zerep Company to play the drums in Les Chauves-souris du volcan, a performance written and produced by Sophie Perez in collaboration with Xavier Boussiron. Over several months the artist wandered the stage and backstage of the show exploring its dramatic devices and techniques as well as the impact of peripheral elements such as the glow of the lighting, the use of dry ice and different intensities of light and sound. One evening, during a creative residency with the team, he made a pencil sketch of one of the characters from the show. This portrait gave him the idea of producing a series of drawings and subsequently the desire for a book in the gonzo style, an ultra-subjective form of journalism combining investigative techniques and journalistic writing from the angle of an autobiographical narrative. To the best of his knowledge, this genre had no equivalent in the field of graphics, so he invented one. Julien Tiberi’s first book was therefore to be a work of “graphic gonzo.”

It was with this mindset and following a strict protocol that Julien Tiberi created the Symphonic Lava series: it was to be drawn from memory, using black Indian ink, on the satin side of a sheet of 250g/m2 Barbizon paper. One drawing a day: a cadence that echoed his “dessins d’un jour” produced in the High Court, during the Clearstream trial in 2009, and that he had managed to deliver more quickly than the official courtroom sketches that appeared in the press.

However, the type of drawing Julien Tiberi has produced for Symphonic Lava is far from that of a storyboard. From his first impulse to the final touches, the process is permeated by happenstance. His way of “putting the hand before everything else,” as with his drumming and other improvisations, favors the spontaneous inscription of strangeness on the paper, lends variety to the styles used for the different scenes and renders the density of the inking irregular. And fascinates the artist. The use of ink enabled him to “target the devices employed in the performance” such as the use of semi-darkness, flashes of light and contrasts, and by analogy the way these devices work, passing from darkness to light in an infinite number of shades of grey, produced by the successive use of an eraser. By working on shades of black reinforced by darkness Julien Tiberi mimics the techniques of theater. The ink, obliterating or revealing different areas of the paper, works like stage lighting, focusing on one part of the stage and obscuring the others. Unlike the use of pencil that “when erased soon produces a kind of fog” the combination of ink and eraser “fixes the skeleton of the drawing, and allows its contours to be worked on by a process of removal,” thus producing “an interpretational device capable even of dealing with the texture of light.”

Oscillating from a close-up to a panorama without bearings or from a mollusk to a quasi-abstract shape, the scenes from Symphonic Lava are reminiscent of William S. Burroughs’ mediumistic paintings, whose magical aim was to produce (in us) the effect that was represented (in the drawing). Delivered without explanation or reference, this type of drawing is dedicated purely to experience. By grabbing the spectator’s attention and slowly opening his eyes to what is played out in the scene, Tiberi’s drawings function in a similar way. They lose us and yet hold us in their grip. What is this place? It is no longer quite that of the performance, but rather a fragmented, imperfect and dilated version that Julien Tiberi’s memories have recreated and to which his ink-soaked drawing attest, notably with their static explosions, morphean recurrences and successive engulfments; so many sketched attempts at working around a space without boundaries. Whence the ectoplasmic auras that invade the pages like misty emanations.

At one particular moment in the creative process leading to Symphonic Lava, it became necessary for the artist to have an overview of the whole. Arranged following the chronology of their creation, the scenes revealed sequential events: the character in the first drawing gradually fades into billows of smoke, an octopus appears then disappears in a dark glow, a hand rises from the darkness, etc. Although this material originated from the stage performance, and was nourished by its tableaux vivants, there was nevertheless a lack of recognizable or sufficiently frequent “anchorage points” or “fixation points” to galvanize the narrative and catch the eye. Creatures whose habitat is close to volcanoes were to serve as a pretext: the artist had discovered several relatively unknown species that were physically fascinating. He drew a number of them, without seeking to be accurate in his depiction and deliberately altering them from what he remembered, with a desire to create animal portraits: “of creatures that look us in the eye.” Strategically inserted into the series, these scenes began to function as “post-performance hallucinations,” like subliminal images or the deformations observed whilst tripping on acid. The artist then completely re-arranged the order of the scenes for the books layout, in what he referred to as a “total recreation,” like the rewriting of a musical score.

Disturbed visions, confused feelings, specters and shadows, certain details are drawn directly from Julien Tiberi’s artistic pantheon, however he also cites vague reminiscences of Afred Kubin’s figures from the brink of the abyss (1902-1907 period), the textures of Virgil Findlay’s scratchboard pulp fantasy illustrations from the 1950s and memories of Charles Burchfield’s unkempt landscapes from the 1930s, depicting “the sounds and auras of things.” These are all residual elements that emerge from the artist’s darkroom, yet if they conjure up the golden age fantasy, they do so in an opaque manner. Like inked raw materials, impervious to light and whose blacks are shot through by darkness, the pages of Symphonic Lava are waiting for us to “clarify the vision” that is to say to appropriate the relationship between what is brought to light and the pervading darkness. It is only at this moment that a rapport with time will emerge that we can experience, page after page, alongside the disorientation particular to a space that becomes accessible by the very fact of no longer being there.

After graduating in history of art and philosophy, Alexis Vaillant began his professional career at the MAMCO in Geneva (CH) (1995-1999) before co-founding the Paris Toasting Agency with Eva Svennung in 1999. He is an independent exhibition curator and has worked together with many important European cultural institutions including the Musée d’art moderne de la Ville de Paris (FR), the Stedelijk Museum Bureau Amsterdam (NL), the EDF Foundation, Paris, the De Appel arts center in Amsterdam, the Centre d’Edition Contemporaine in Geneva, the Schirn Kunsthalle in Frankfurt (DE), the ICA in London (UK), the Vilnius Center for Contemporary Art in Lithuania (LT), where he organized the 9th Baltic Triennial and the Bordeaux CAPC (FR), whose artistic programming he supervised between 2009 and 2016. He has designed and published scientific works, exhibition catalogs and anthologies of artist’s writings for leading publishing houses such as Sternberg Press in New York and Revolver in Frankfurt. He has contributed to numerous publications for Flammarion, JRP|Ringier, Les Presses du Réel, as well as magazines such as Frieze, Metropolis M, Kunst-Bulletin and Afterall. During the first half of the 2000s, he was the managing editor of the Pacemaker journal (Toastink Press).