Julien Creuzet: feathers our hands our wings glimmer to dance the orange sky

Julien Creuzet: feathers our hands our wings glimmer to dance the orange sky


Andrew Kreps Gallery presents flapping feathers our hands our wings glimmer to dance the orange sky, an exhibition of new works by Julien Creuzet at 394 Broadway, the artist’s first exhibition in New York. 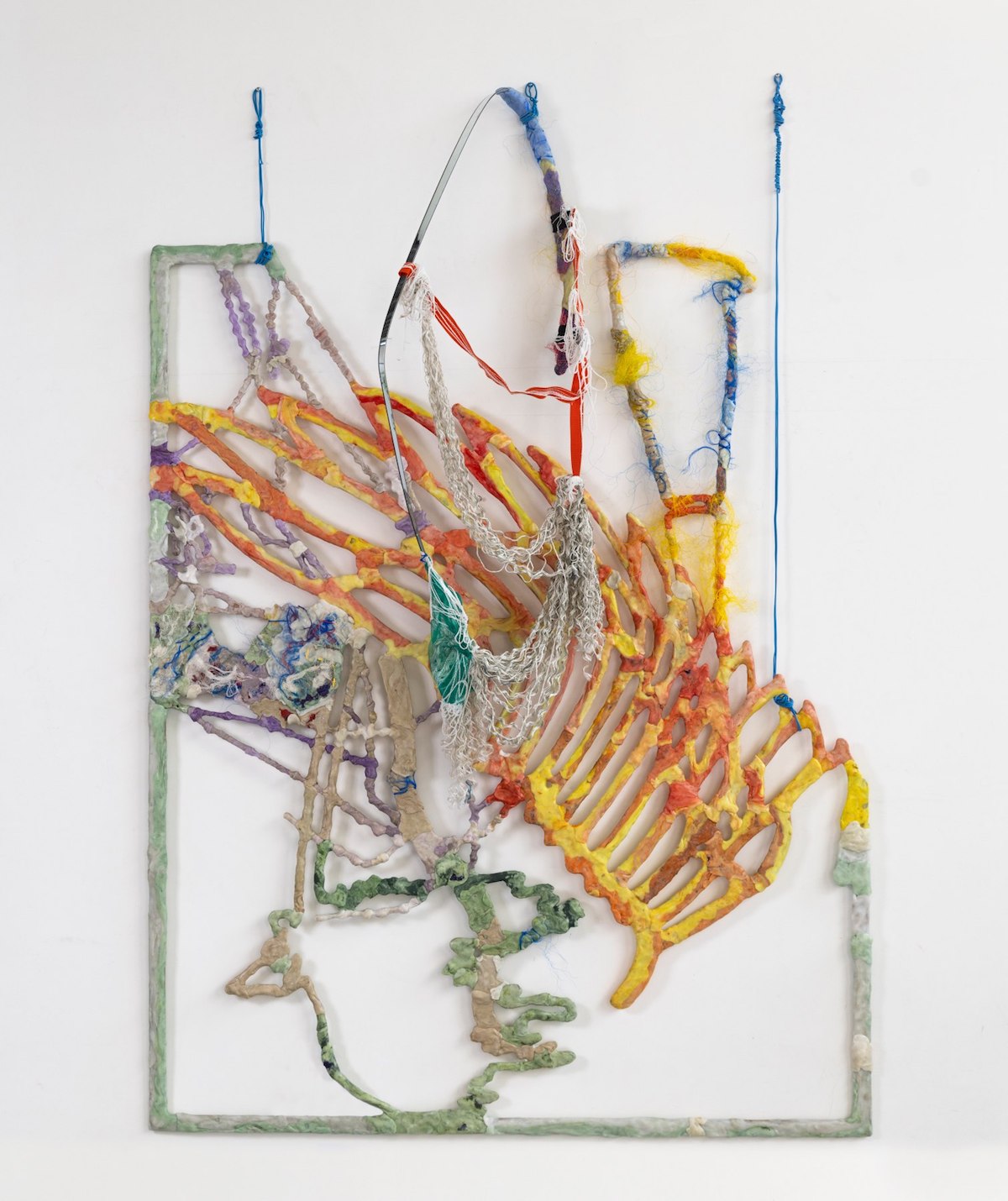 Both skeletal and architectural, Julien Creuzet’s materially dense sculptures weave together his own lived experience with the broader, social reality of the Caribbean Diaspora, which is the result of shared history but simultaneously, has produced a multitude of outcomes. Abstract in appearance, the works’ metal armatures are drawn from maps, topographies, and an array of other images. The resulting forms slowly accrue media, found and new plastics in kaleidoscopic color, detritus, torn fabric, varying textures, and the vestiges of Creuzet’s own touch, creating an accumulation of material that feels like the aftermath of moving through time and place. In dialogue with Creuzet’s writing practice, the titles of his sculptures are excerpted from his own poetry and function as a point of entry, connecting the tangible, historical references within the work with the concerns of the present. Resisting a finite narrative, and remaining open-ended, Creuzet’s sculptures are embedded with the anxieties of impending climate crises, the question of emancipation, and a desire for Black affirmation.

In a new video titled Crossroads, an abstracted figure adorned with feathers, fruits, the wreckage of ships, and viruses, dances in a Bèlè style. A legacy of the music traditions of enslaved people in Martinique Bèlè combined music and movement to create new forms of emotional expression and became a vital form of resistance. Overlayed with texts, and interwoven with imagery of plants and flora, the video is set to sound produced by Creuzet and spoken word in Martinican Creole, suggesting a dialogue with the continuing influence of the Caribbean diaspora on contemporary music. Throughout his work, Creuzet looks to combine both visual and aural languages, to bring together fragments of place, history, and perceptions, into new forms of plurality and dialogue.

Julien Creuzet (b. 1986) is a French-Caribbean artist who lives and works in Paris. His work is currently the subject of a solo exhibition at the LUMA Foundation, Arles, titled Orpheus was musing upon braised words, under the light rain of a blazing fog, snakes are deaf and dumb anyway, oblivion buried in the depths of insomnia. Past solo exhibitions include Camden Arts Centre, 2021, CAN Centre d’art Neuchâtel, Switzerland, 2019, Palais De Tokyo, 2019, and Fondation Ricard, Paris, 2018. Creuzet has additionally participated in numerous group exhibitions, including Manifesta 13, Marseille, 2020,  In 2021, Creuzet was nominated for the Prix Marcel Duchamp, and in 2019 was the recipient of the Camden Arts Centre prize at Frieze London.