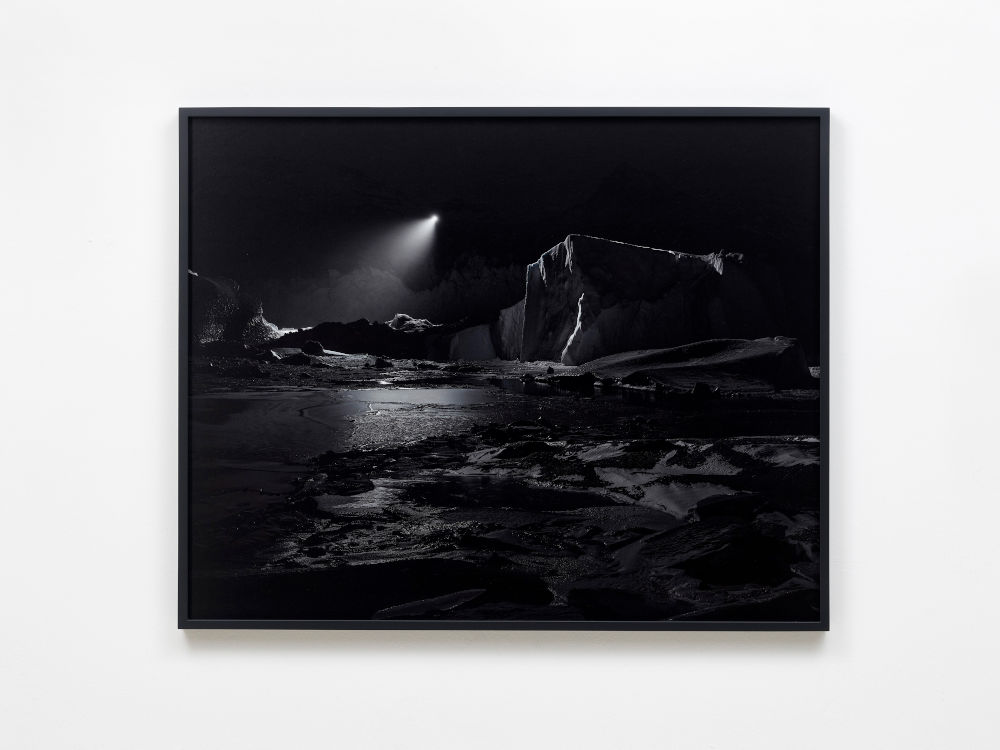 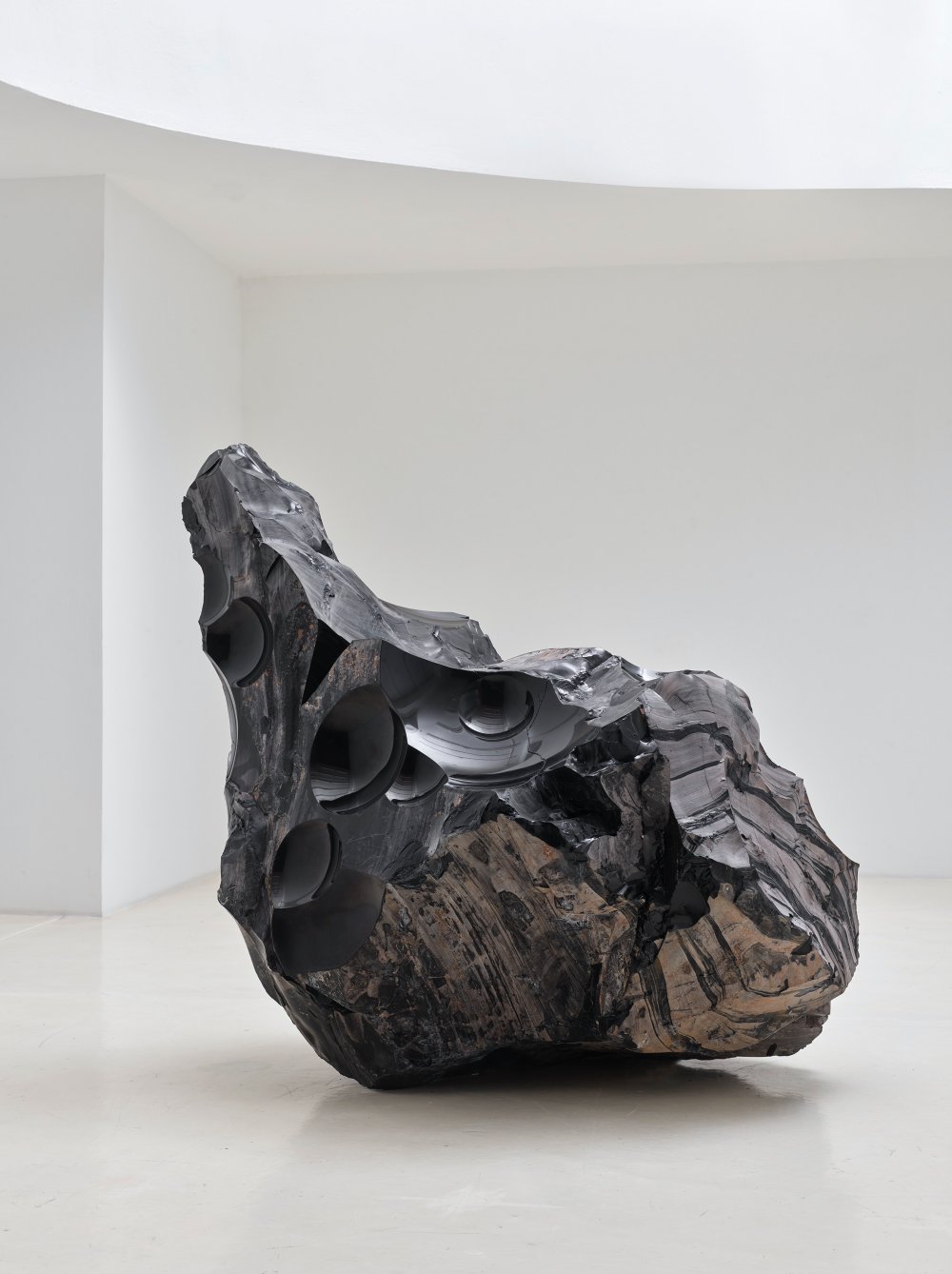 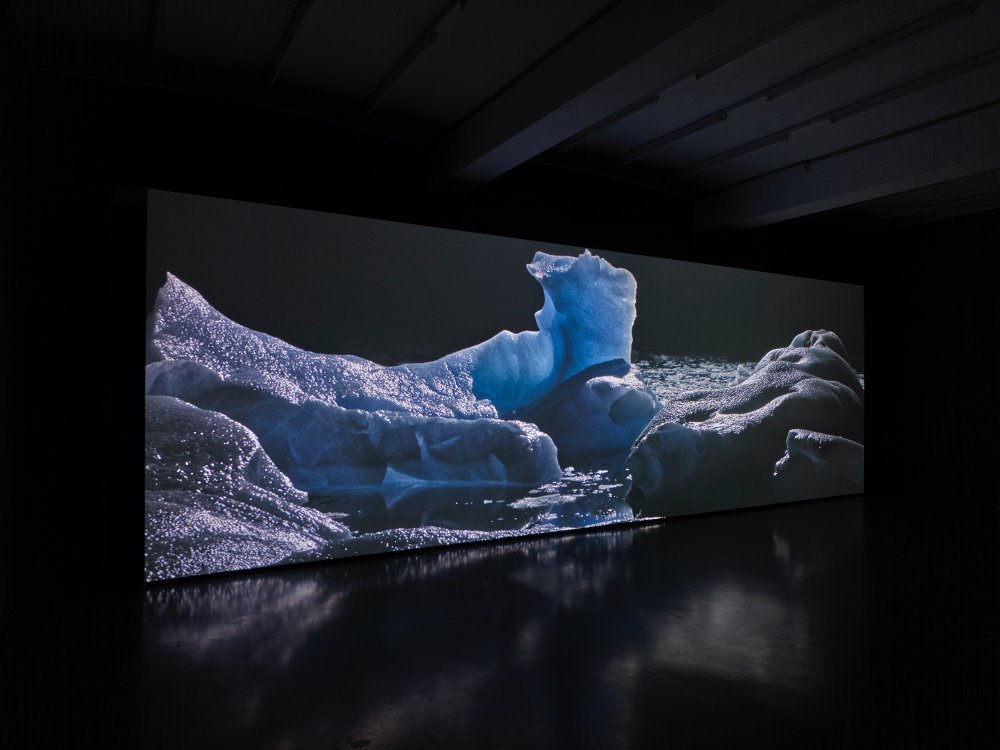 Julian Charriere
Towards No Earthly Pole, 2019 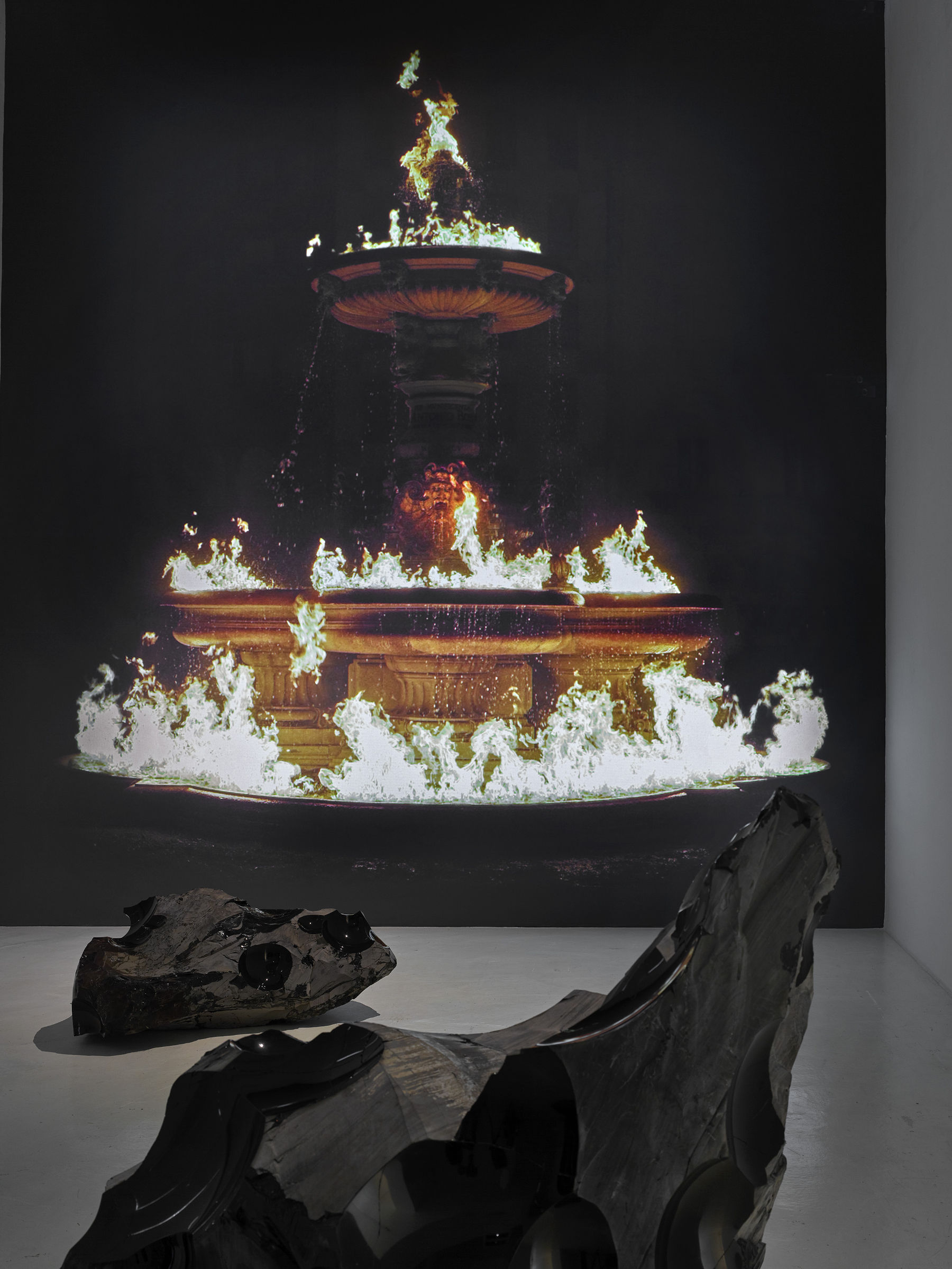 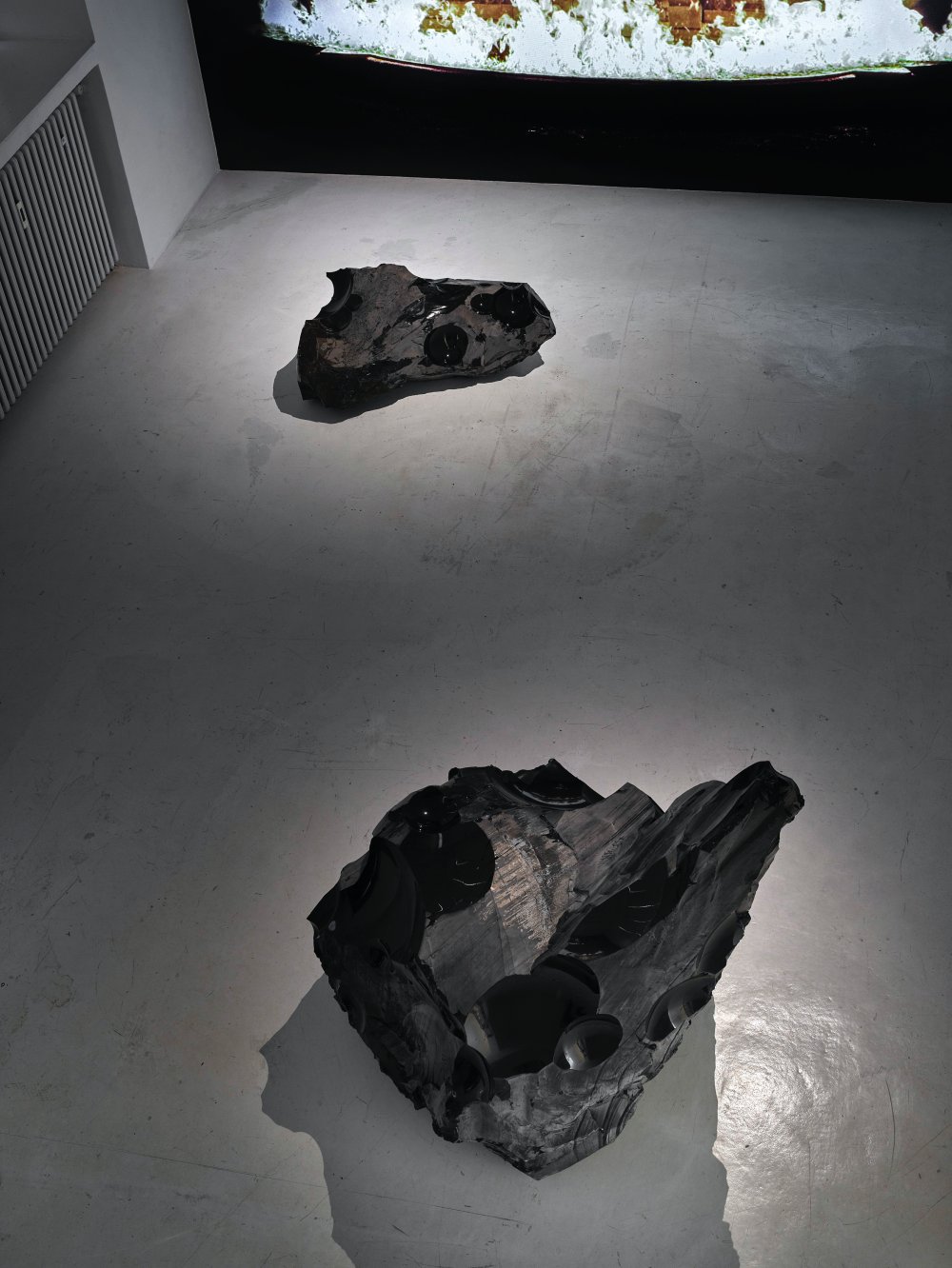 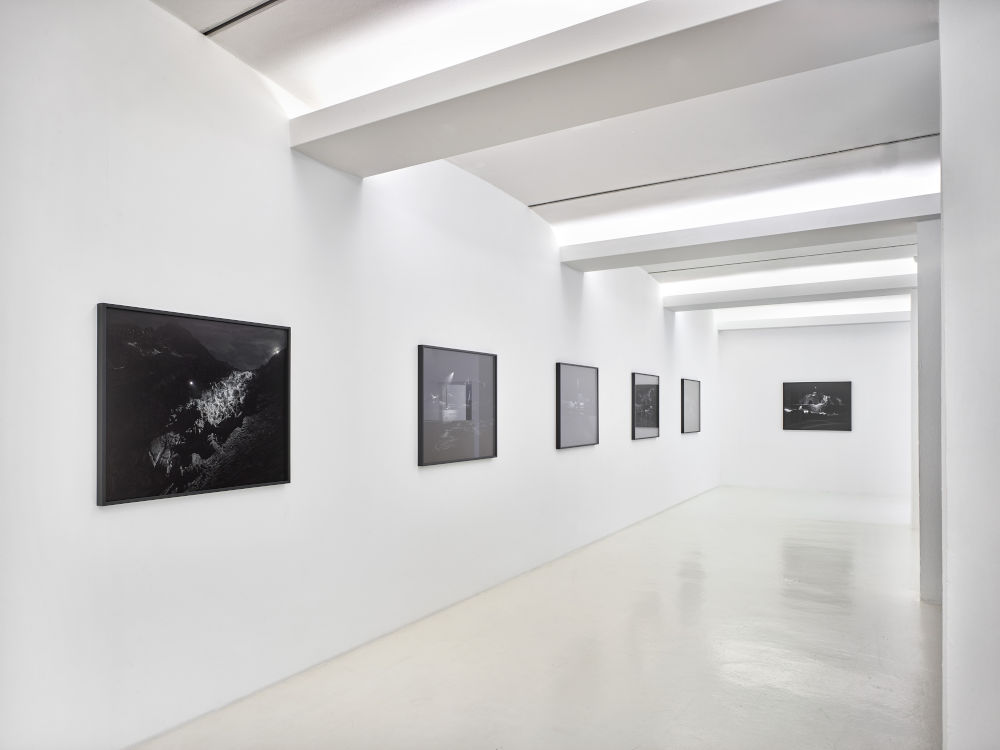 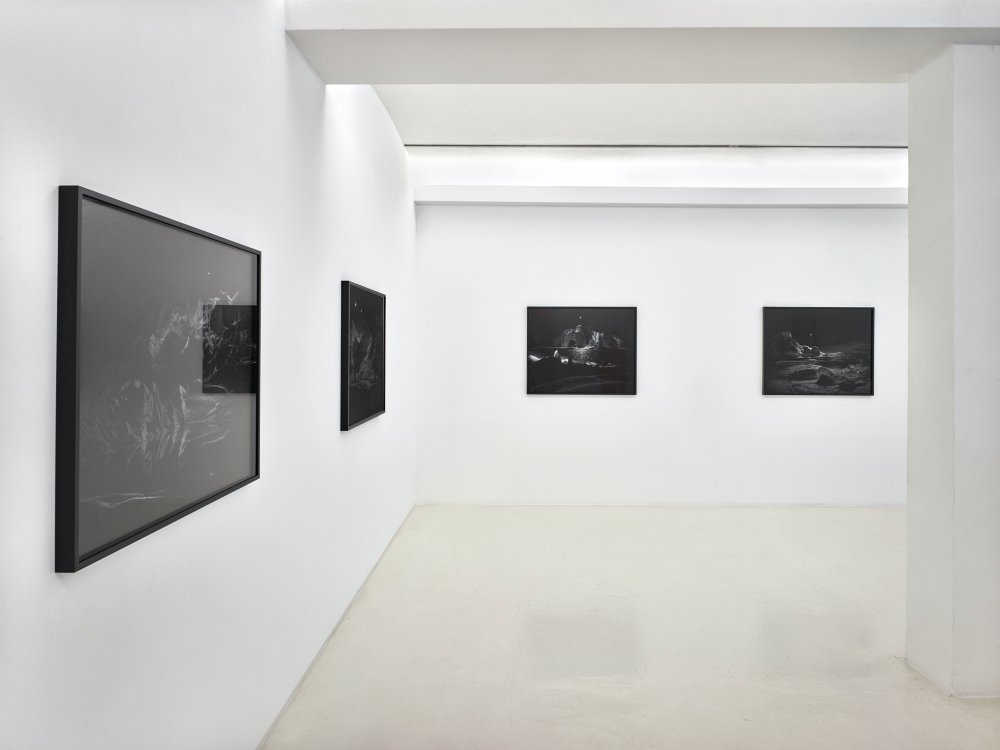 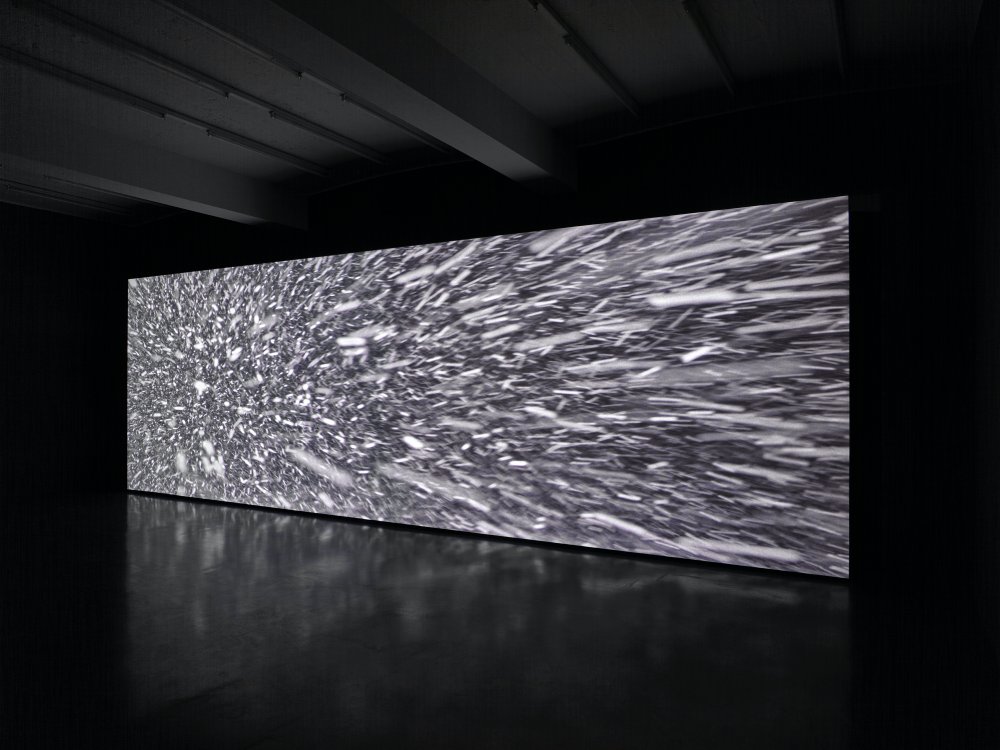 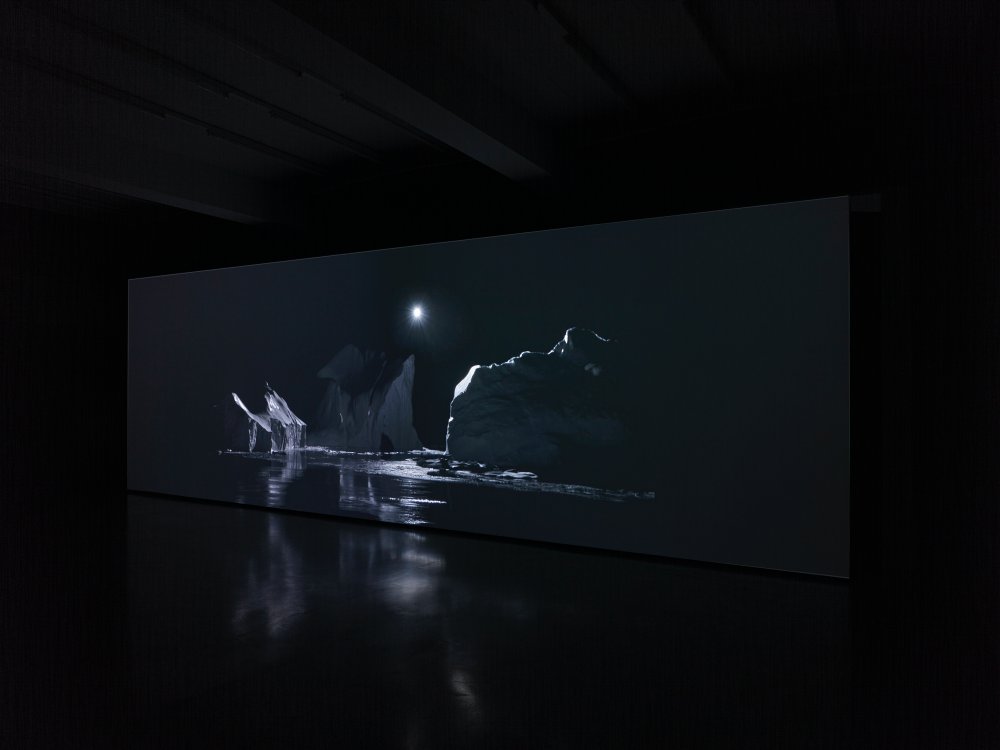 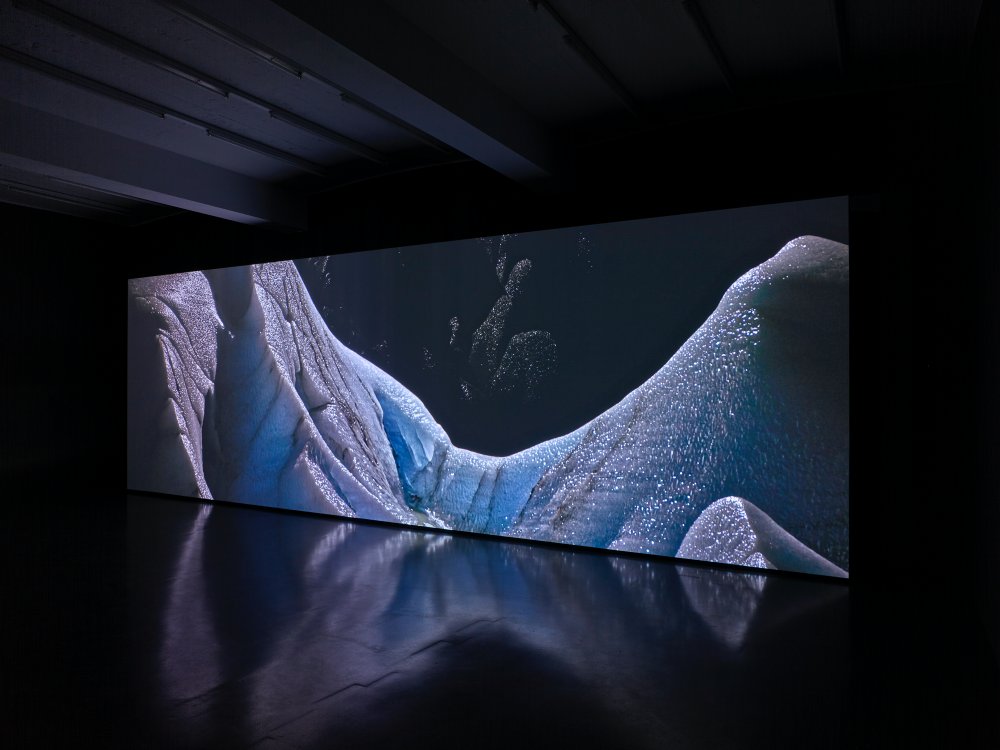 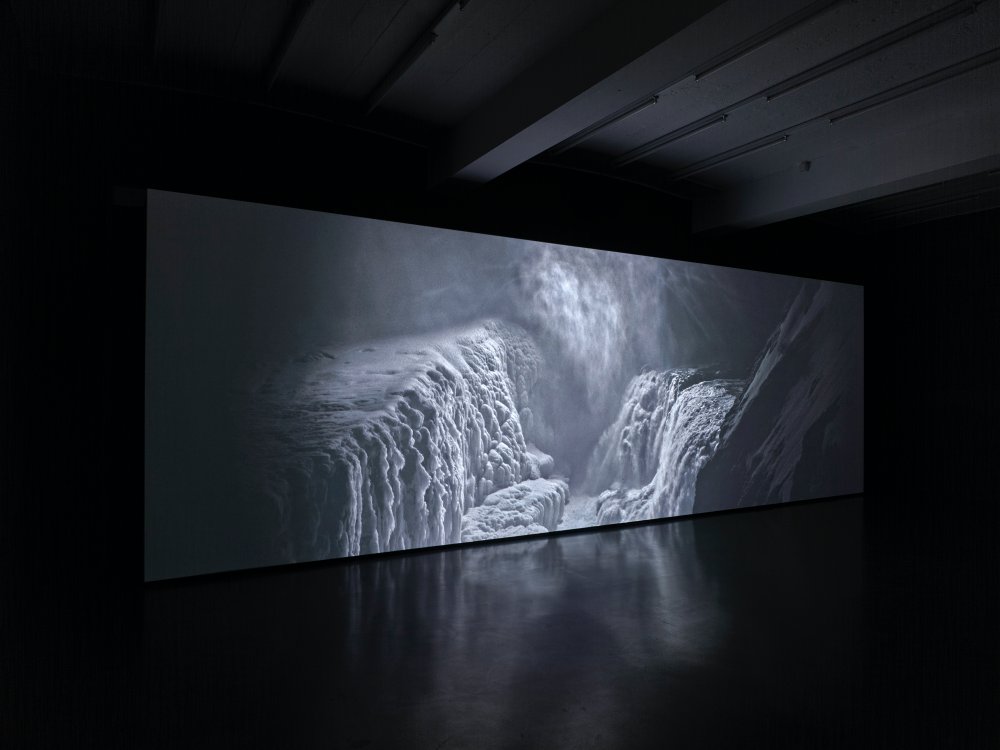 Flames rise from the tiered basins of a neoclassical fountain, to form a conical pyre in the night. Overflowing rings of burning liquid cascade downward, in rhythmic splashes, gurgling amidst the conflagration. Illuminated droplets seem to hang in midair, caught between flight and the gravitational pull of the mass below. And Beneath It All Flows Liquid Fire (2019), a video recording of a site-specific performance staged in Lugano, Switzerland, dramatizes a tension between the vertical impulse of flame and water’s tendency to seek the lowest level.

Thresholds between realities are figured as transitions between states of matter in Julian Charrière’s newest body of work. The burning fountain encapsulates the enigma of another world: a speculative glacial landscape, composed of video footage shot by drone under the cover of arctic night. Images of polar and high-altitude glacial regions are at once alien and overly familiar—cool blue, gleaming from the crevices of jagged cliffs, vast stretches of whiteness, and, occasionally, portraits of cultural life on bare terrain. Long a domain of projection and fantasy, these regions have played host to a myriad of fictions, from the literary to the paranoid. And yet, as exquisitely sensitive registers of climate change, they are also indices of a reality principal within today’s mediascape—saturated with stock images of calving glaciers and stranded polar bears. As the poles and mountaintops warm at twice the rate of the rest of the planet, threatening local cultures and economies, global strategic interest in new shipping channels and mineral rights leave little time for melancholy. The poles are overexposed.

The importance of defamiliarizing ourselves with their iconography issues from a need to confront the radically changing conditions of the environment itself. Drawing inspiration from Jules Verne’s prescient novel The Purchase of the North Pole (1889), Julian Charrière deploys a drone’s uncanny perspective in search of a critical optic. Stemming from a series of expeditions to high latitudes and altitudes in the Arctic, Greenland, Iceland, the French and Swiss Alps, and Antarctica, Towards No Earthly Pole presents a unique vision of 21st Century glacial landscapes—a novel consideration of their mythos, delicate ecology, intensive technological mediation, and fraught geopolitical conditions. The video follows a spotlight over the surface of glaciers and icebergs bobbing in frigid seas. Haunted by knowledge that the earth is warming all too rapidly due to human activity, the camera’s uncanny technological gaze tracks rutted paths of meltwater, and the sublime vista of glacial waterfalls, drawing attention downward to the waterline, beneath which ninety percent of any iceberg remains submerged.

“When you return to earth, send us some ice, for we thirst for cold water down here,” said the people of the underworld to Kúnigseq. The Inuit story of Kúnigseq, collected in the early twentieth century by the Danish-Greenlandic explorer Knud Rasmussen, tells the tale of a wizard who visits the underworld by descending through floors rinsed with seawater. Aided by guiding spirits, he passes through a reef entangled with slippery seaweed into a world of abundance that resembles that of the living in many respects—except insofar as “there is no snow, and a beautiful open sea.” The underworld, we may infer, is a warm place. Like Orpheus and other mythic travelers to the underworld, Kúnigseq is urged to resist his mother’s embrace and the berries she offers him, lest he be forced to stay below with his departed kin. As he departs, the inhabitants of the underworld plead for some ice, to quench their thirst for cold water.[1]

Told to pass the time during the long months of polar night, these stories were expanded and elaborated until the listeners fell asleep. As Rasmussen relates, many begin “with the proud declaration that “no one has ever heard this story to the end” and end abruptly, as though the narrator gave up in mid-stream, having suddenly noticed that all the members of his audience were sleeping. “The telling of the story thus becomes a kind of contest between [the storyteller’s] power of sustained invention and detailed embroidery on the one hand, and his hearers’ power of endurance on the other.” One can readily imagine sinking into the embrace of a dream on a cold winter’s night, comforting visions of a warm underworld beneath the ice; a world so warm it calls for a drink of refreshing meltwater from the world above.

“Time moves differently here in the underland,” writes Robert MacFarlane of his subterranean journeys. “It thickens, pools, flows, rushes, slows.”[2] Beyond dreams, the geological underworld supplies its own flow of transgressions. One of these takes the form of lava, spat up from the belly of the earth in volcanic eruptions, which cools rapidly to form obsidian once it reaches the surface. Obsidian lacks the crystalline structure associated with true minerals; it is, rather, a supercooled and congealed liquid, a form of black (or green) glass whose physical properties cause a distinctive conchoidal fracture pattern. The ripple-like fractures produce extremely hard edges, which allowed obsidian to be fashioned into flints by Neolithic peoples and thus to become one of the earliest materials to be traded and transported over large distances. Much later, dark obsidian mirrors delivered omens and pleasantly distorted landscapes in the form of the Claude Glass. Sculpted from large chunks of obsidian, Charrière’s Thickens, pools, flows, rushes, slows unearths these complex histories and casts black volcanic glass against glacial ice, itself a true mineral, whose shattering pattern now resonates across the threshold of worlds.

Dehlia Hannah, PhD is a philosopher and curator based at Aalborg University-Copenhagen, and editor of the forthcoming book Julian Charrière—T