MAMOTH presents The Watery Realm, the first presentation of the work of Julia Adelgren in the UK, featuring a selection of paintings produced over the course of the last four years.

Julia Adelgren
Out of This World, 2019

Julia Adelgren
Neither This nor That, 2019 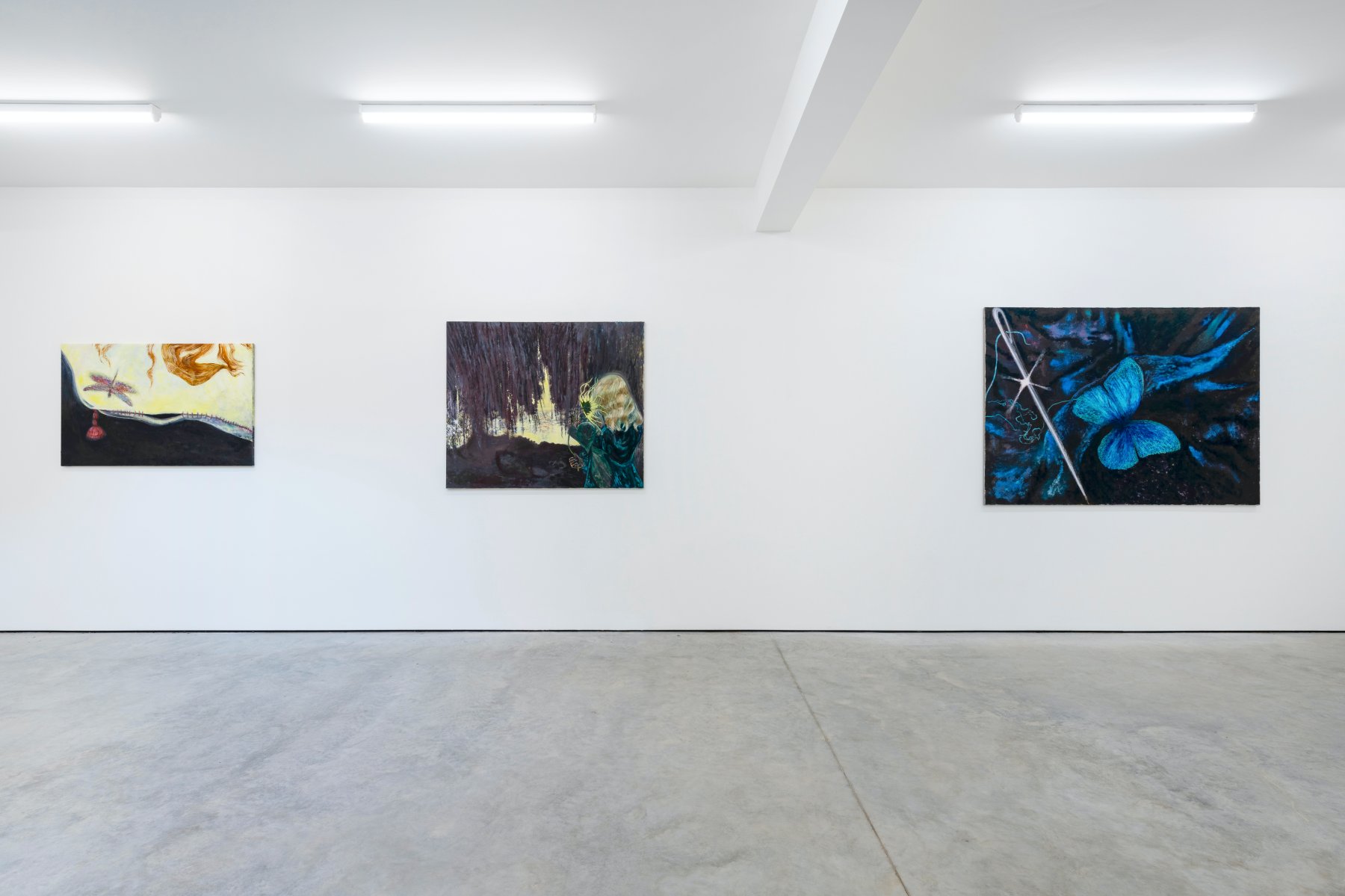 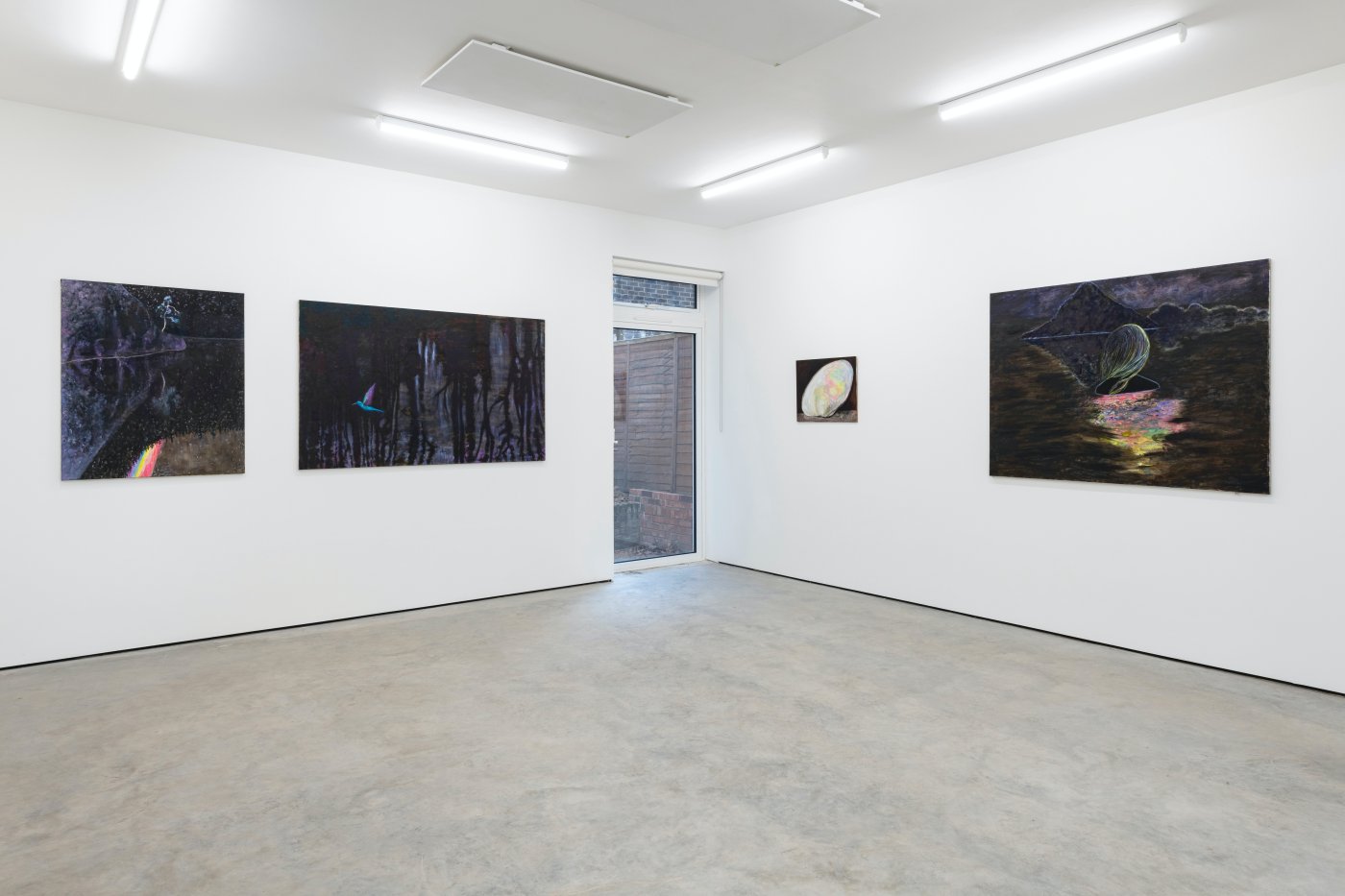 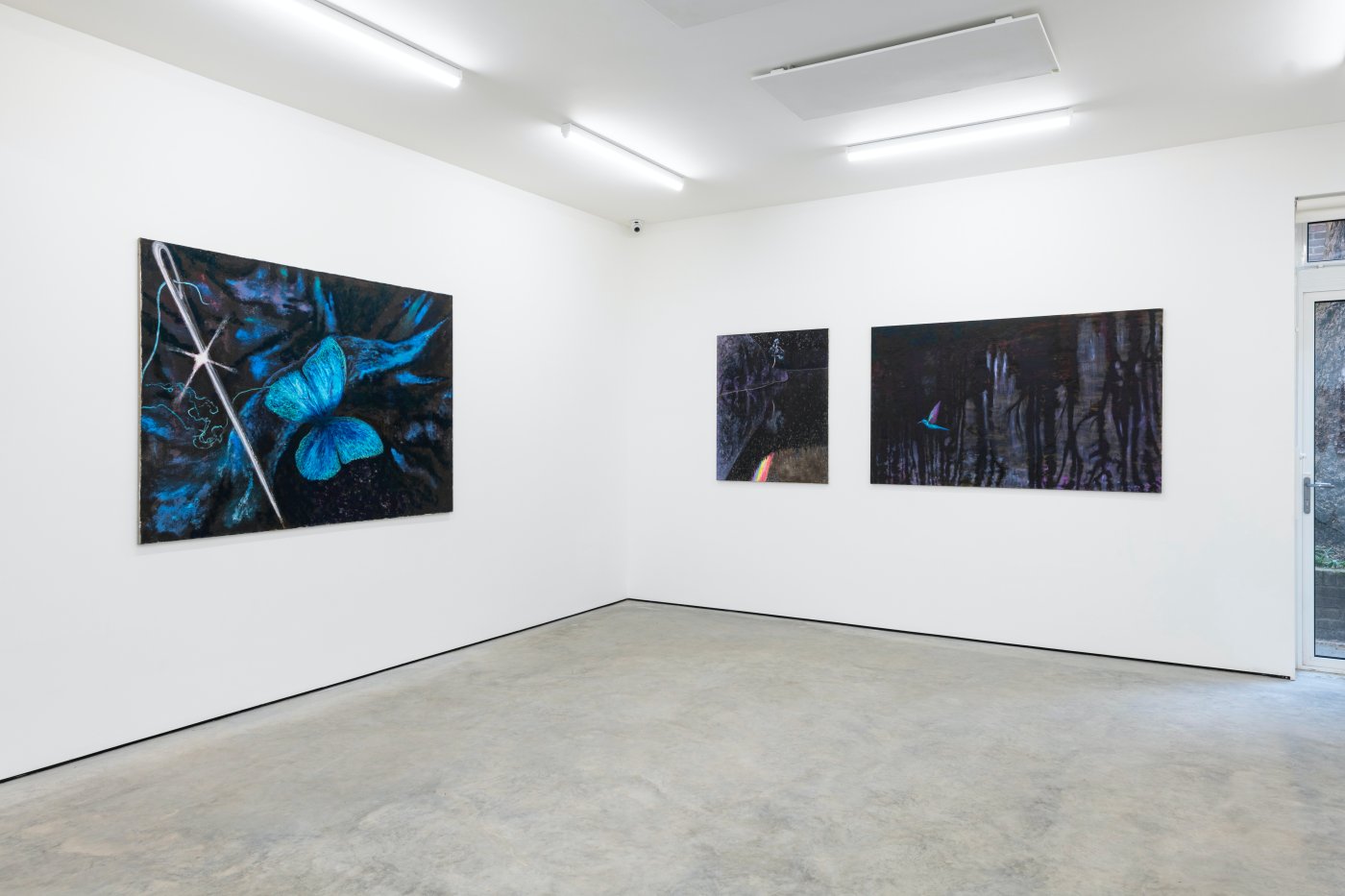 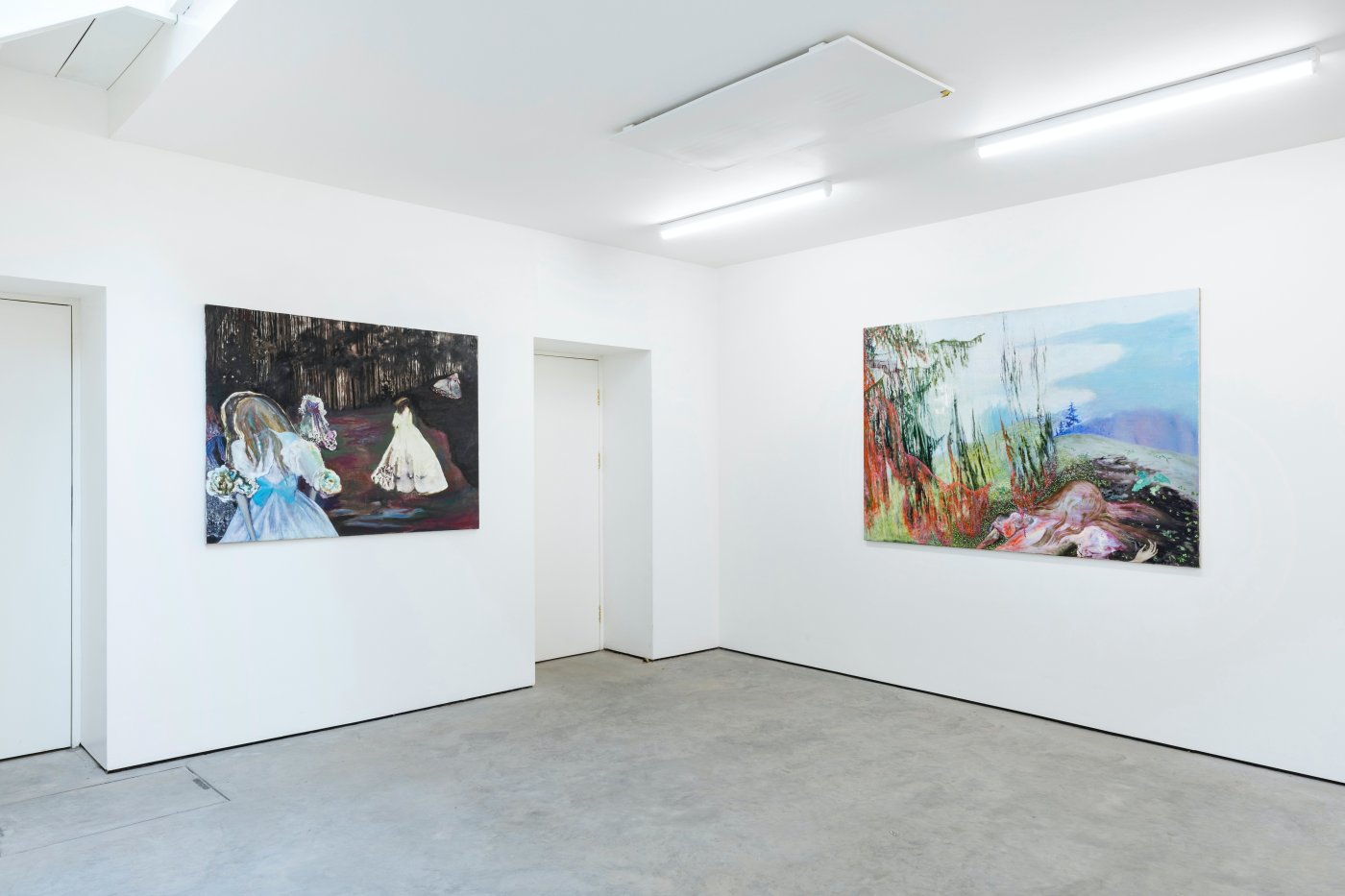 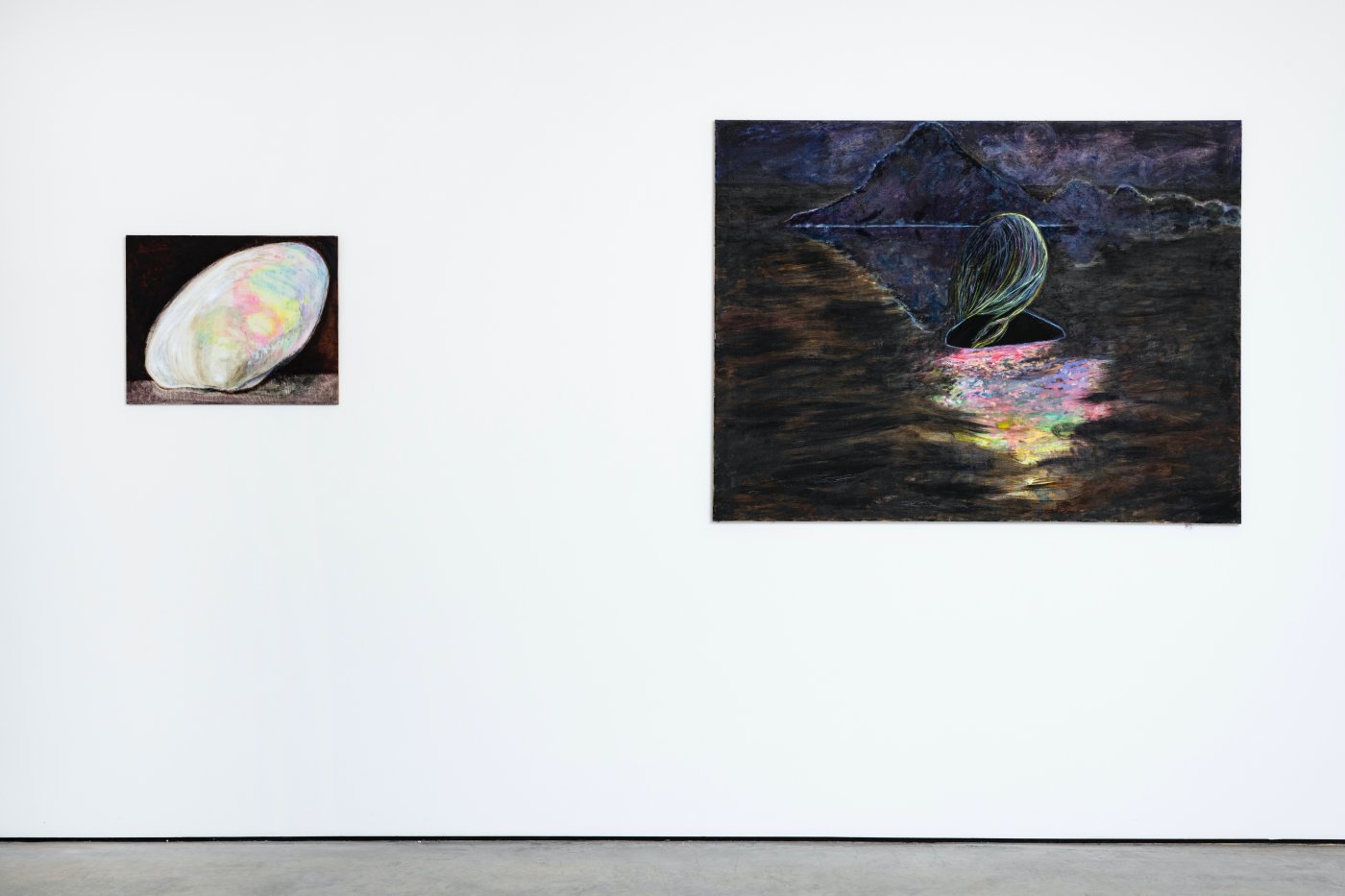 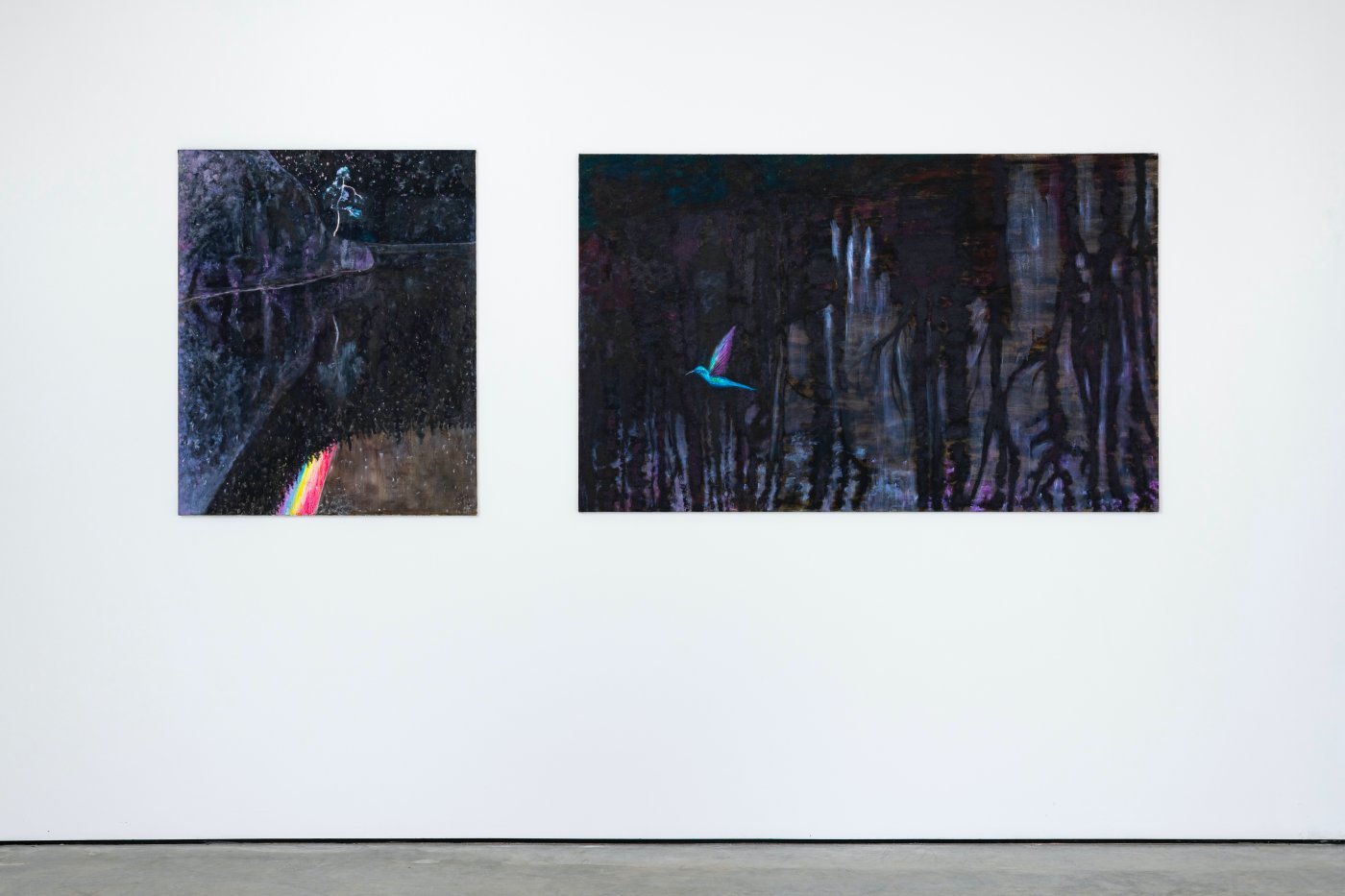 Born in Sweden, Adelgren has lived and studied in Stockholm, Bergen and Düsseldorf and is currently living and working in Copenhagen. Highly attuned to the natural world, everyday life in these diverse cities has provided her with constant visual stimuli, especially the sweeping mountainscapes, dramatic skyscapes and earthly colour tones of Bergen’s natural scenery.

Adelgren’s unique style of landscape painting engages a contemporary interest in psychological compositions, distilling personal observation, forms taken from her dreams, cinematic freeze frames and references to a range of influences. Adelgren is inspired by the work of writer Patrick Modiano; the landscape paintings of Corot; Monet; and Bruegel the elder; the tradition of Japanese woodblock prints and the films of John Cassavetes; Rainer Werner Fassbinder; and Andrei Tarkovsky to name just a few examples.

Adelgren values the importance of physically constructing a canvas herself. Beginning with stretching linen onto a wooden frame, then treating the linen with rabbit skin glue followed by a layer of gesso, this process gives greater control, allowing her to further understand how to build up surface textures and painterly effects from the first layer. Adelgren’s studio practice is one of accumulation over time, a bodily process of stepping back, moving left to right across the surface of the canvas, considering all possibilities. Synthesising direct experience with collective storytelling, Adelgren allows forms, motifs and subjects to enter her compositions organically.

Painting with oil on linen, her subject matter and methodology lends her painting an expansive and otherworldly repose that appears independent of space and time, whilst simultaneously alluding to everyday life. “The stories or images that reach me through reading integrate in the paintings very naturally, because I use them to discuss things that are on my mind with myself. I suppose it’s all about what you are susceptible to in your life at a certain time and place” – Julia Adelgren

Taking its title from Yuko Tsushima’s story of the same title, Adelgren’s exhibition at MAMOTH uses water as a poetic protagonist, and chimes with the more folkloric events of Tsushima’s story. Her work hones in on the interplay of light and reflection on the surface of water, whilst rendering water as a perpetually unknowable body, enveloping, sometimes threatening, but offering transportive possibilities.

The works on display possess a distinctly nocturnal colour palette. Presenting a world of variable light and shadow. The task of defining the nuanced shifts in light, becomes an exercise in how to paint darkness, in its myriad textures and colour tones, which slowly reveal themselves, the longer they are viewed. Observed from life, even in the midst of darkness, Adelgren’s technique for painting water is always seemingly playing tricks with the eye, a fantastical production, where what is on or below the surface is in dialogue with that which is above.

The Watery Realm, the show’s title work, is a painting derived from the artist’s mind. Though Adelgren set out with quite a clear idea for this composition, her way of working is very different for each work. Her paintings can begin with just a colour, a texture or a detail in mind, other times, the whole picture is more or less fully formed from the beginning. In this painting, a large butterfly rests, shimmering tones of teal and aquamarine, to its left an enlarged needle and thread glistens. These recognisable objects are depicted in an intimate setting from a personable distance, where one can imagine peering into the bed of a shallow river at night. Adelgren was reading Tsushima’s story when working on this painting, she remarked that the narrative seemed to mirror a lot of what was happening in the painting at the time. This palpable relationship with the text can be felt throughout the show.

Other works on display came out of a longer development period, where the image can change many times beyond recognition from where it began. Adelgren has commented that “…for a long time they can be like sandpaintings, coming and going, shape-shifting”. Rainbow Blood for example was in progress for a large part of 2020. The painting depicts a female figure, her face obscured, back turned, partly submerged in water, straight ahead a ragged series of rocks, foreshadows the whole composition. Adelgren consciously doesn’t give identifiable detail to her figures, wishing the viewer to be unencumbered by characterisation, amplifying instead the atmosphere and mood which reverberates in the absence of conclusive detail. Behind the figure, to the bottom of the image, luminous colours pool on the surface of the water, beaming light in the midst of darkness. The heaviness of the dark tones works by contrast to spotlight the sheer intensity of the fluorescent colour that flanks the figure.

Iridescent blue is one of numerous works on display where the point of view appears to be skewed, rendered in the reflection of water, from the perspective of someone looking downwards. This a departure from earlier works, in particular works such as Thee Who Seeks, Thee Who Shouts, Thee Who Seeks, also on display, where the central formation of five women can be viewed in a woodland, on solid ground, straight on, at human eye level. Iridescent blue by comparison represents Adelgren’s recent movement resulting in a perspectival playfulness, where the forms take a little more time to comprehend.

Though she draws and sketches on paper, Adelgren doesn’t use preparatory drawing for her paintings. Her compositions often begin with the compulsion to simply render a form as seen in a dream. Wild Strawberries or Bell Heather is one such example where the painting has the quality of a conjured dream, the horizontal red stitching in the image could just as easily be sutured flesh as it could be stitched cloth. Waspish strands of hair cascades from the top of the frame, to the left a dragonfly hovers on the surface of the image. Adelgren has noted that with paintings such as these, everything can still change during the process of its making. Informed by intuition, Adelgren has remarked that “I think that my painting is a lot about blowing life into the pictures. Making them become what they are, not what they could be”. The Watery Realm has the texture of a palimpsest of stories, with echoes of Nordic Romanticism, forms partially visible in the darkness rise to the surface, with time becoming more and more incandescent.

Installation view of Julia Adelgren, The Watery Realm at MAMOTH, 2021. Image courtesy of the artist and MAMOTH