Perrotin presents Daydream, a solo exhibition by artist Josh Sperling, organized across three floors of the gallery’s New York space. The exhibition, Sperling’s largest, marks a return to key motifs in the artist’s practice, developed over the course of the last decade and re-articulated by Sperling in this new body of work. Additionally, in Daydream, the Ithaca-based painter debuts a new series, continuing his investigation into the material possibilities of color and form. 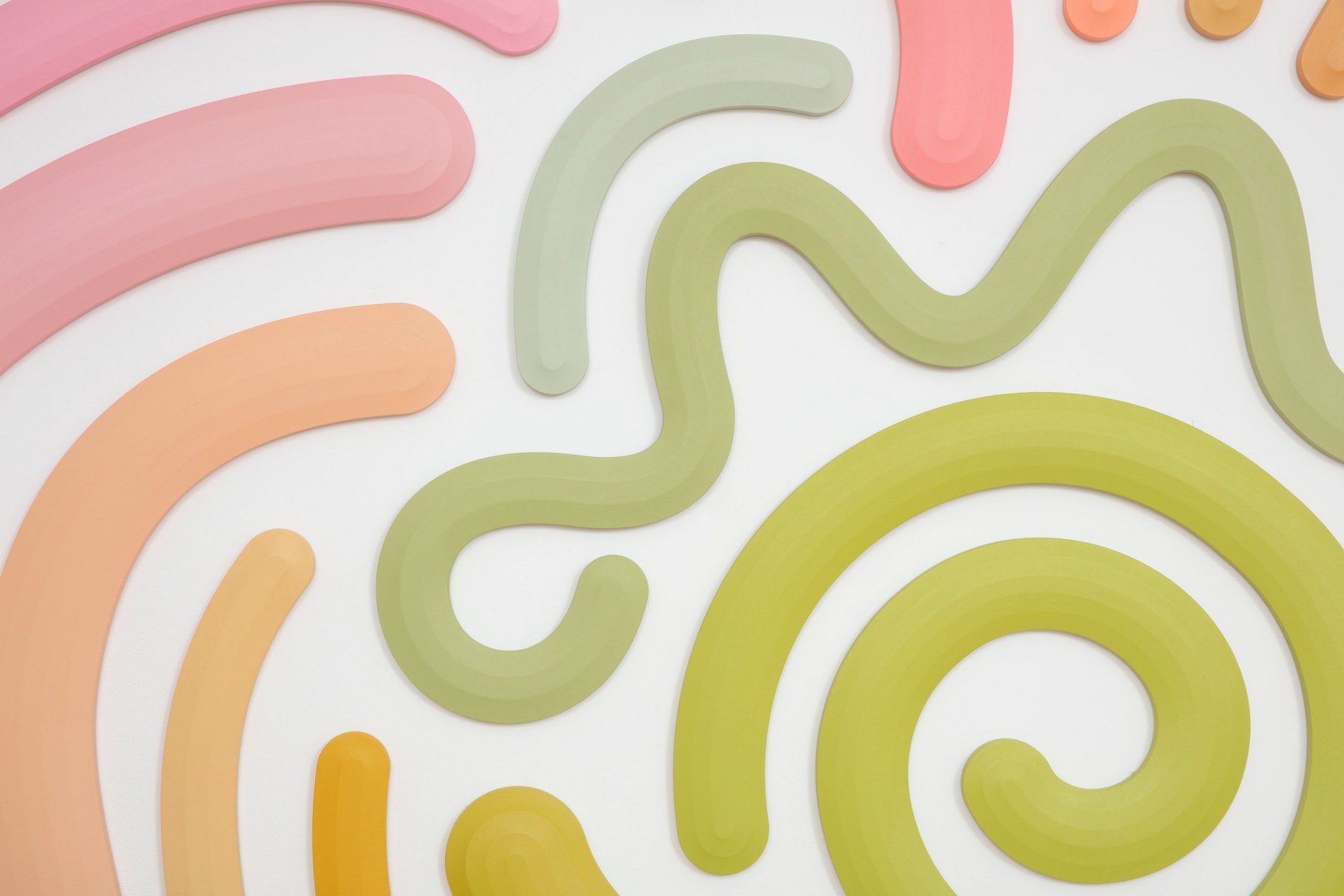 The following essay was authored by writer and critic Max Lakin after visiting Sperling’s studio in Ithaca, New York.

Taped to a small refrigerator in the back of Josh Sperling’s studio in Ithaca, New York is a curling piece of office paper printed with seven bulleted lines of plain type that detail, in the flattest possible terms, how to understand color:

These rules are immutable and rigorous, but also there’s something clarifying and non-negotiably true about them, which is what a Josh Sperling work is like, too. Color is important to Josh, and he’s obsessive about it. That’s clear from just a few minutes with him, before you learn that his studio has developed 1,200 proprietary blends of paint, and before you see a good percentage of them, in the form of little pots of finely tuned burnt umber and cadmium red and manganese blue that colonize the floors and figure into the finished paintings, which are deeply saturated and uniformly immaculate. Looking at one of Josh’s paintings is also like being submerged in it, each construction a warm bath of azure or malachite or cerise, each one a fully formed world.

Josh is also interested in shapes. His paintings don’t look like paintings, exactly. They curl and wend and spiral. They shimmy up the wall and slide across it, possibly in a corkscrew, or maybe a segment of sine curve. They don’t really do this, of course, because they’re securely fixed in space and strictly mapped, yet they manage a kind of uncanny movement, vibrating like beveled moray eels. His built-up canvases, stretched over precision-cut plywood supports that radiate outward, like the rings of a tree, protrude from the wall in limitless permutations, so that the picture plane not only extends into space, it makes space part of the deal. There’s a sense of freedom about them that’s totally hypnotic. Many artists have been credited with liberating the picture from the canvas, but Josh’s feel like a jailbreak, like he’s hooked his truck to the stretcher bars of a painting and floored it, busting apart the whole thing, making something new with the parts. The astrophysicist Carl Sagan, another Ithaca resident, said “If you wish to make an apple pie from scratch, you must first invent the universe.” Josh seems to have taken the advice.

Where do Josh’s shapes come from? One of his earliest series, the squiggles, still make up the atomic structure of everything that came after. To any artist, the line is the crucial bit of information, the primordial imperative that sets the whole thing in motion. Josh’s squiggles are like that — the mark, the brushstroke. His lines are stretched taught, so it’s something of a miracle that they should look so soft, as if you were to take a circle and unravel it the way you would peel a clementine.

His practice travels along the formal continuum shared by the Minimalists, so there’s some Frank Stella and Sol LeWitt and even Donald Judd in there. But there’s a lot of design, too: the Googie drive- ins of mid-century Los Angeles, with their postwar optimism and look- at-me geometry — the Bob’s Big Boy Broiler of the mind; and Memphis: a puckish clash of squiggles and blaring color that shakes you just enough so you can see straight. Josh’s constructions are finely wrought, like a particularly beautiful chair you can’t sit in, like the constituent parts of a Peter Shire settee grafted onto the wall.

At first, his newest series seems to return to a more orderly form: a square canvas, neatly confined within its frame. That’s a bit of a feint; they’re some of the most conceptually heavy works Josh has made yet, interlocking bands that bubble and contract, like an undulating bicycle chain without end, and which expand outward from a central node — a classical, satisfying circle-in-the-square formation. Each piece, which can seem to incorporate a technicolor dreamcoat of hues, actually only features one, viridian green, say, or pyrrole orange, dialed up and down along the spectrum so they resemble an Josef Albers on psilocybin. After a while of looking they begin to hum, the crash course seminar painter’s taped to the fridge given physical form.

On a drive through downtown Ithaca, Josh points out Sagan’s former residence, a majestically spooky Egyptian Revival tomb built partway down a cliff overlooking Ithaca Falls. The pitch of it looks maniacal, the whole thing ready to totter into the gorge at any moment. But there’s a placidity, too, an awareness of its place in space. There’s something of that terrain in Josh’s work, his panels suspended in elegant precariousness, the roughness of their ridges smoothed into something beautiful, the kind that reveals itself in balance.