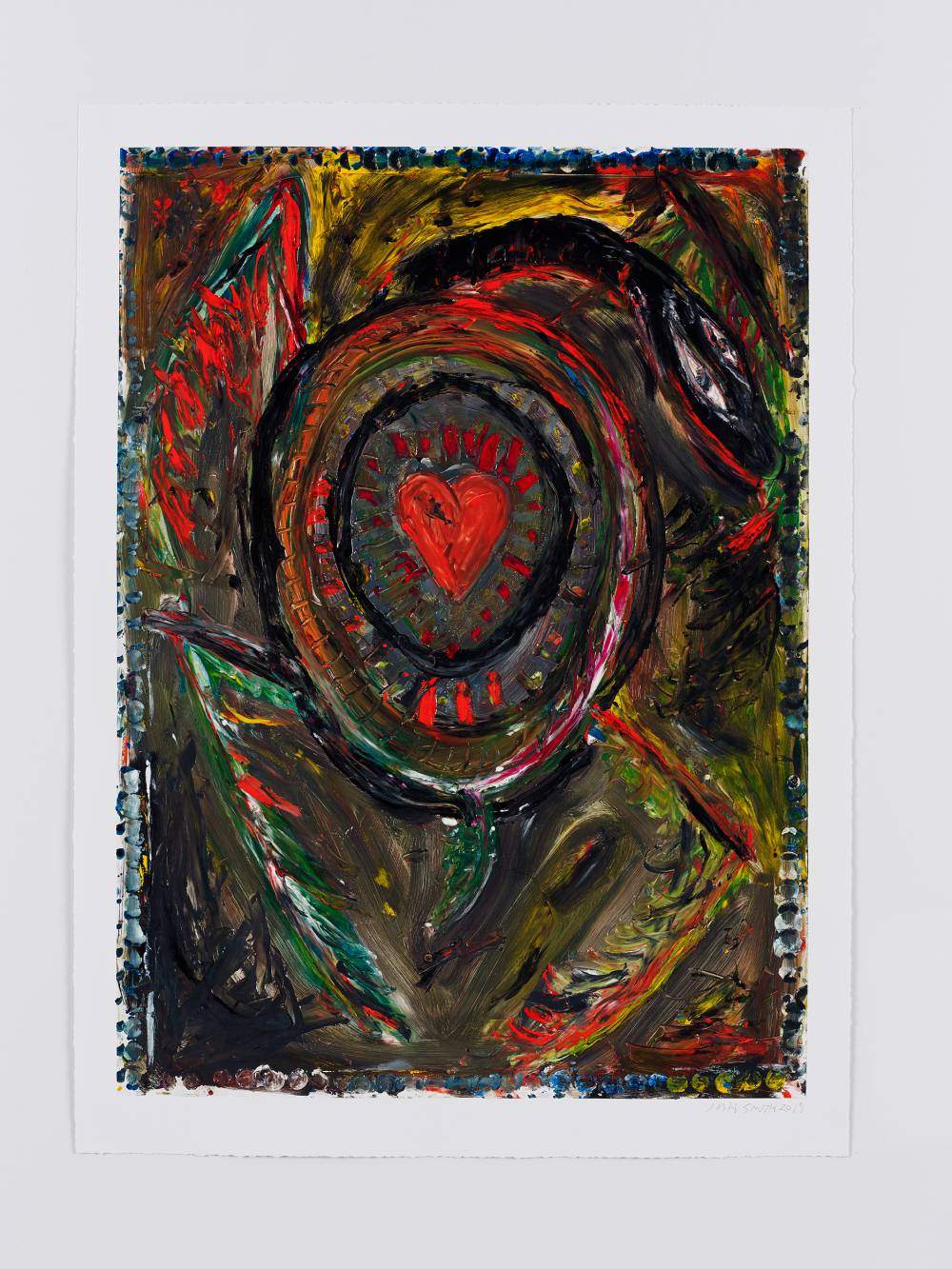 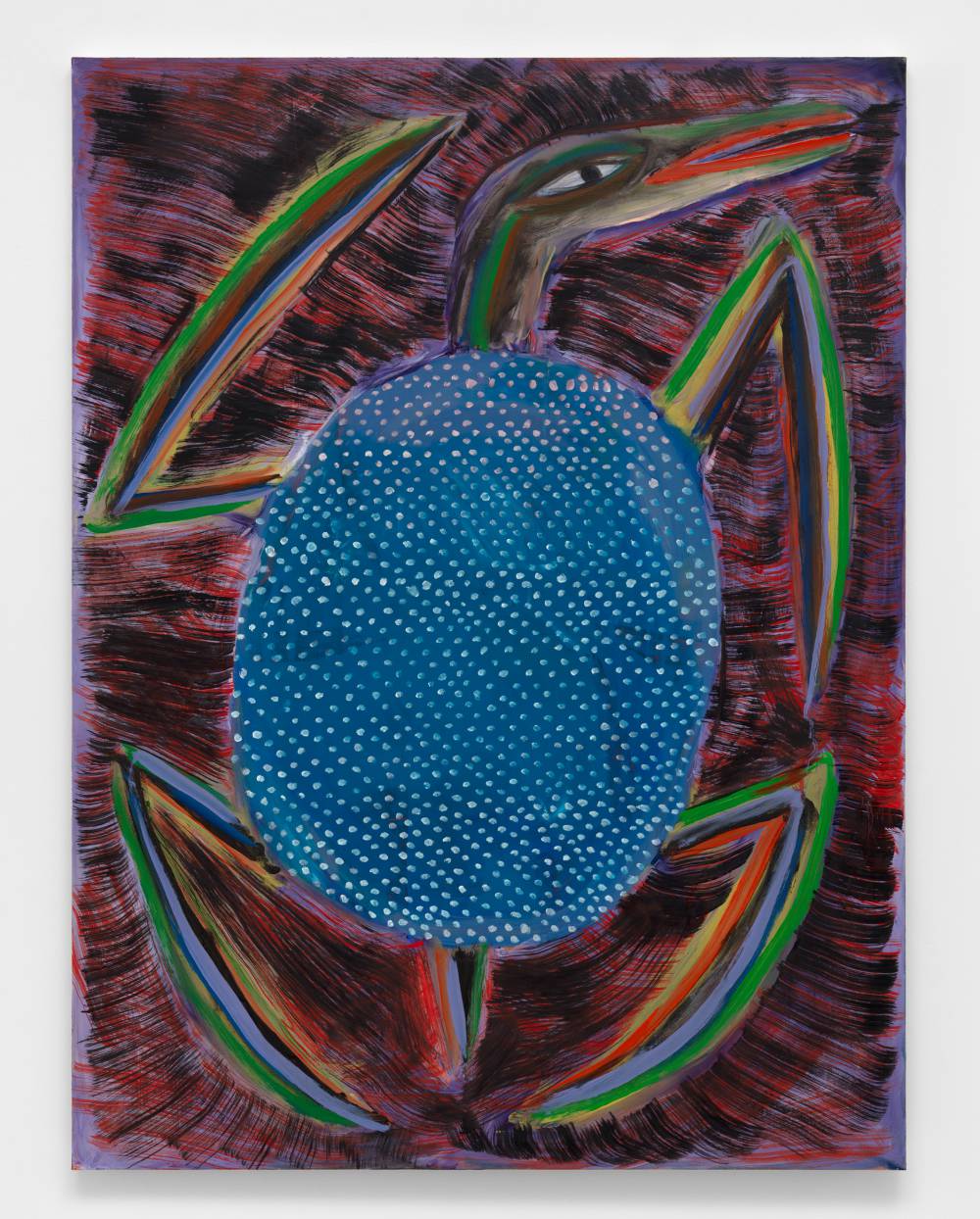 Smith is known for paintings in which he uses his name as a motif to create a cosmos of semi-abstract images employing myriad techniques, all of which are informed by art history. Besides painting, his work encompasses print, sculpture, drawing, and collage. In his practice, Smith often uses existing forms, which are sometimes derived from well-known mythological narratives, at other times from pop cultural phenomena such as tattoos or animals. This cosmos includes iconic images, such as two palm-trees on a beach, a fish, a dinosaur, a half-cut melon, the grim reaper, or a devil-like figure. Smith’s way of painting his name and of repeating iconic images calls into question notions of originality and authenticity as well as human communication in general.

In this exhibition, Smith shows new paintings of a turtle seen from above. The form is easy to recognize—and even to reproduce. The repetition of this figure is a way of avoiding too much focus being placed on the motif while continuing to develop it. Each depiction is unique through variations in palette, style, and even—in a minimal way— the subject itself. The turtle can be seen as an excuse for painting a huge abstract oval at the center of each canvas. At the same time, it is not a product of mechanical reproduction, but the result of an accurate contemplation by the painter, always reflecting a different mood. The simple form of the turtle expresses a complex tension between the ornamental or abstract shell, the background, and the reptile’s extremities, which carry out different postures. Each rendered turtle retains its own character while the iconographic similarity is apparent.

The exhibited canvases elicit the question of how Smith develops his themes. A body of work from 2019, including, for the most part, smaller formats depicts more abstract turtles. Their outlines are not sharp and they seem to disintegrate; consequently, the technical aspect of painting and its expression of the self come to the fore. The turtles are framed by an almost folkloristic painted line, which resembles a frame. These frames are characteristic of Smith’s oeuvre as they stem from his practice of leaving a canvas’s edges blank so it can be carried before it is dry.

Smith also shows a suite of larger canvases of ornamental turtle-shells, painted on wholly different decorative or abstract backgrounds, and creating dramatic tension. A red dotted shell on a green-grey cloudy background emanates an atmosphere of solitude or even melancholy, while the turtle with a polka-dotted shell and a green floral background seems to be optimistic in a contemplative way. With regard to their outlines, these animals are far more distinct than earlier ones, and, as if to acknowledge the turtles’ new sharpness, Smith did not “frame” them.

While the abstract turtles seem to point to an inner self, the ornamental ones explore surface. The act of painting the same subject in two different ways creates individual characters while simultaneously allowing a dialogue between the works. The figures are reflections of the emotional state the artist is in, as well as the viewer’s feelings when confronted with these images. The iconic status of the motif is kept in the background by the quality of painting, prompting one to question how iconic images are perceived. On the one hand, one could ask what the iconic value of a turtle is, on the other, Smith goes beyond any form of iconic or symbolic meaning by creating his unique method of communication.

Josh Smith was born in 1976 in Okinawa, Japan (his father was in the military) and, after a number of relocations, grew up mostly in East Tennessee. He has lived in New York since 1998. He has had several solo exhibitions in the United States and abroad at institutions including Bonner Kunstverein, Bonn, DE (2016); Museo d’Arte Contemporanea Roma, Rome, IT (2015); The Brant Foundation, Greenwich, US (2011); Centre d’Art Contemporain Genève, Geneva, CH (2009); De Hallen Haarlem, Haarlem, NL (2009); and MUMOK, Vienna, AT (2008). He has also participated in important group exhibitions such as Painting 2.0: Expression in the Information Age, Museum Brandhorst, Munich, DE (2019-20); The Forever Now: Contemporary Painting in an Atemporal World, Museum of Modern Art, New York, US (2014-15); The Painting Factory: Abstraction after Warhol, Museum of Contemporary Art, Los Angeles, US (2012); Le Printemps de Septembre, Toulouse, FR (2011); ILLUMInations, Venice Biennale, Venice, IT (2011); and The Generational: Younger Than Jesus, New Museum, New York, US (2009). His works are held in numerous public collections including the Centre Pompidou, Paris, FR; MUMOK, Vienna, AT; the Whitney Museum of American Art, New York, US; and the Museum of Modern Art, New York, US.

Josh Smith: Life @galerieevapresenhuber Zürich new paintings of a turtle seen from above, repeated to avoid too much focus on the motif while continuing to develop it - each turtle has its own character while remaining iconographically similar click the link in our bio for more #JoshSmith #GalerieEvaPresenhuber #EvaPresenhuber #Zurich #gallery #exhibition #art #painting #abstract #figurative #geometry #contemporaryart #modernart #seemoreart #GalleriesNow #lifestyle #ID17878