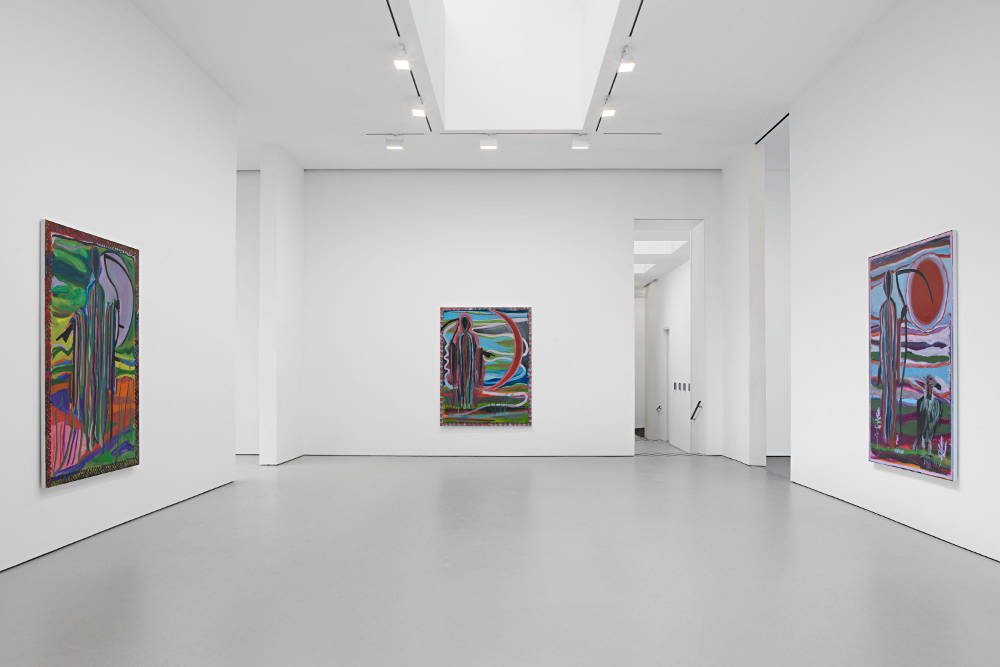 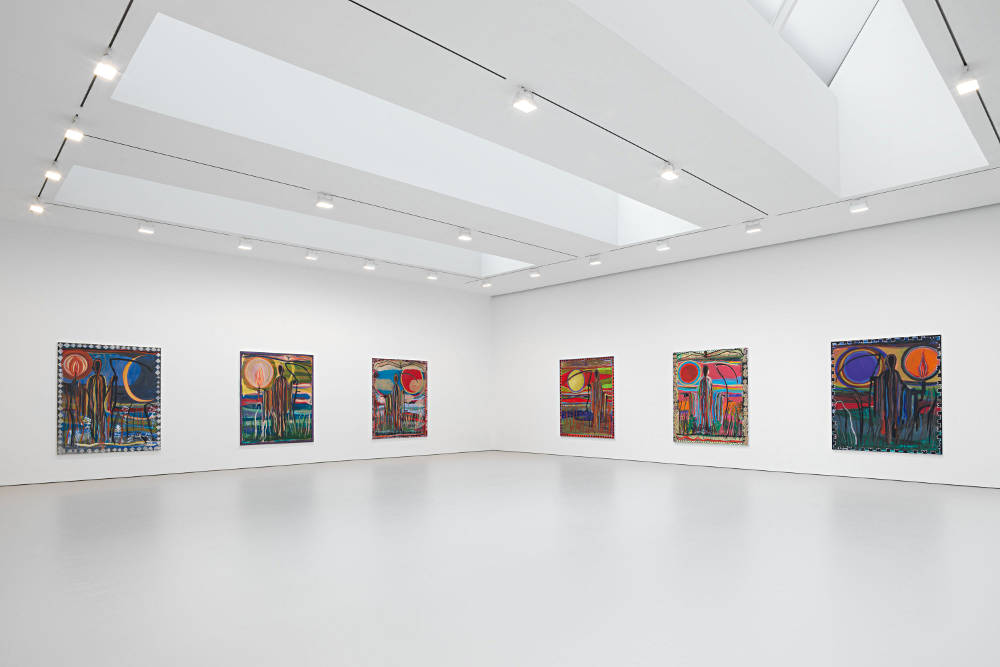 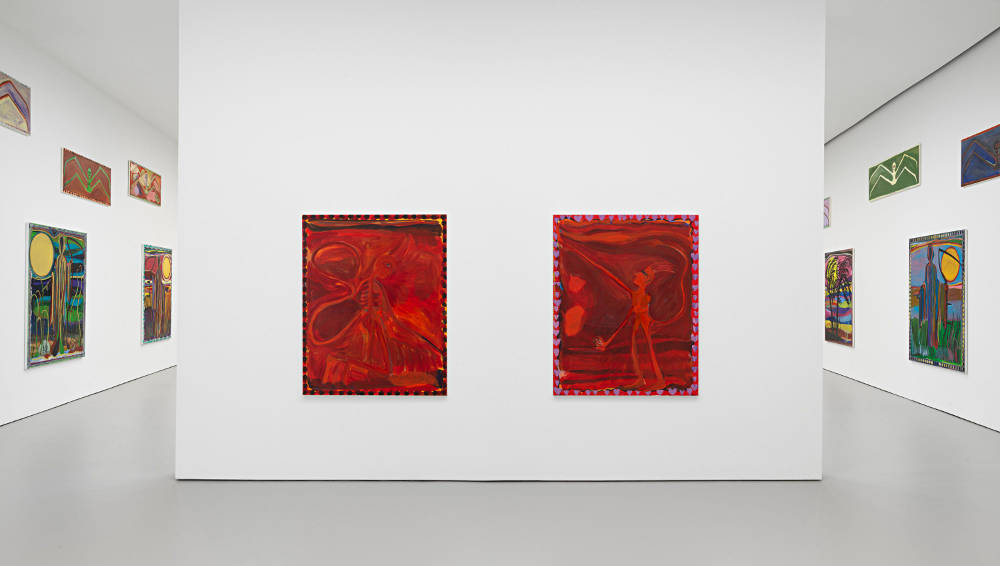 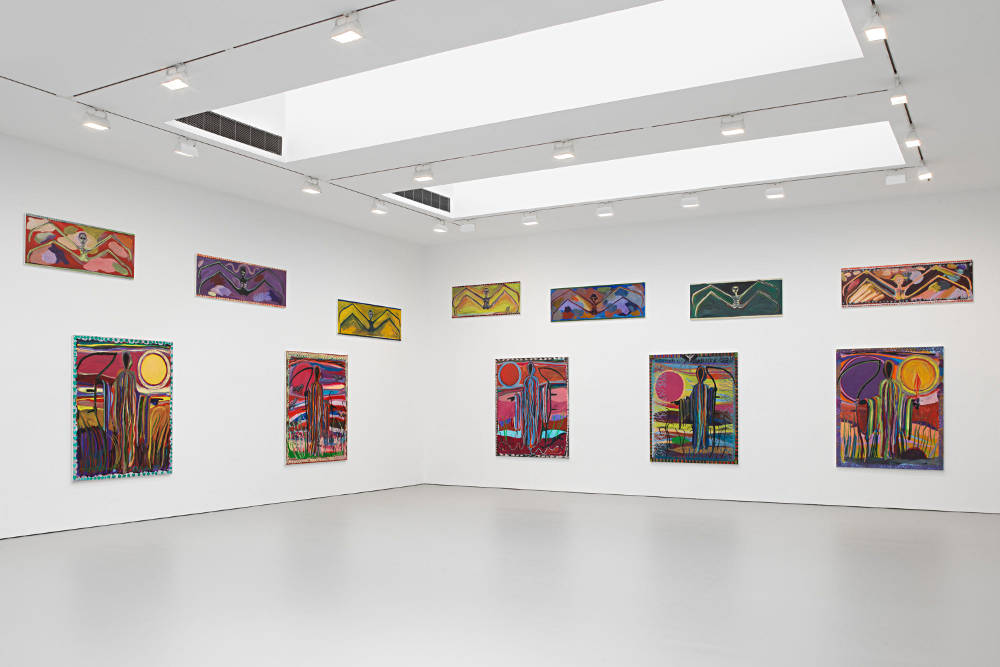 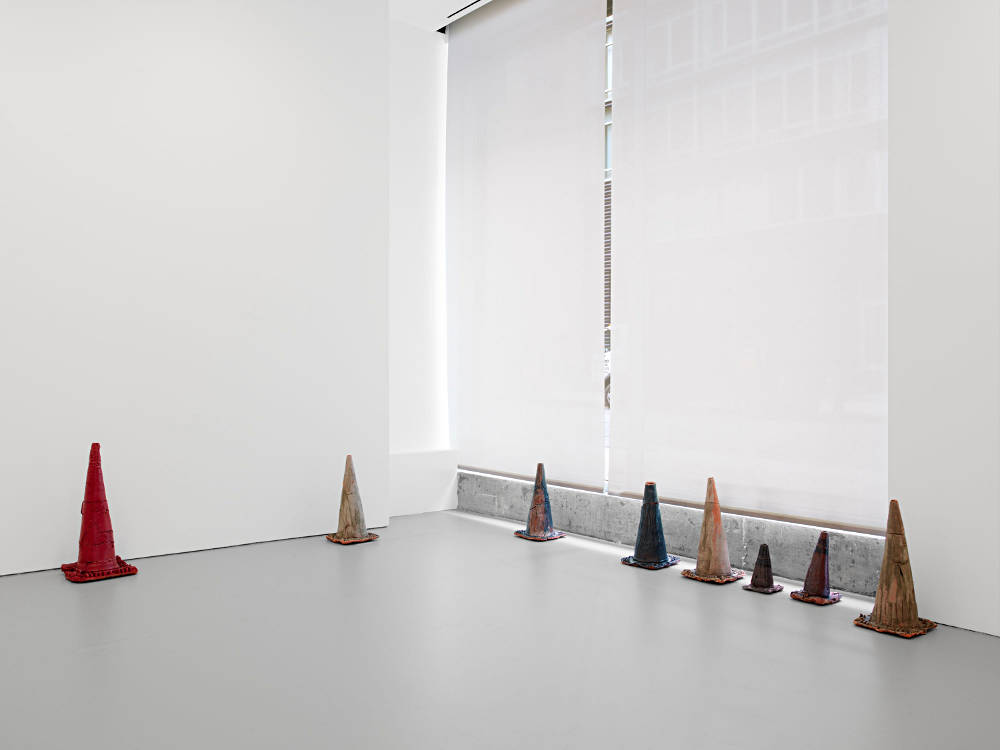 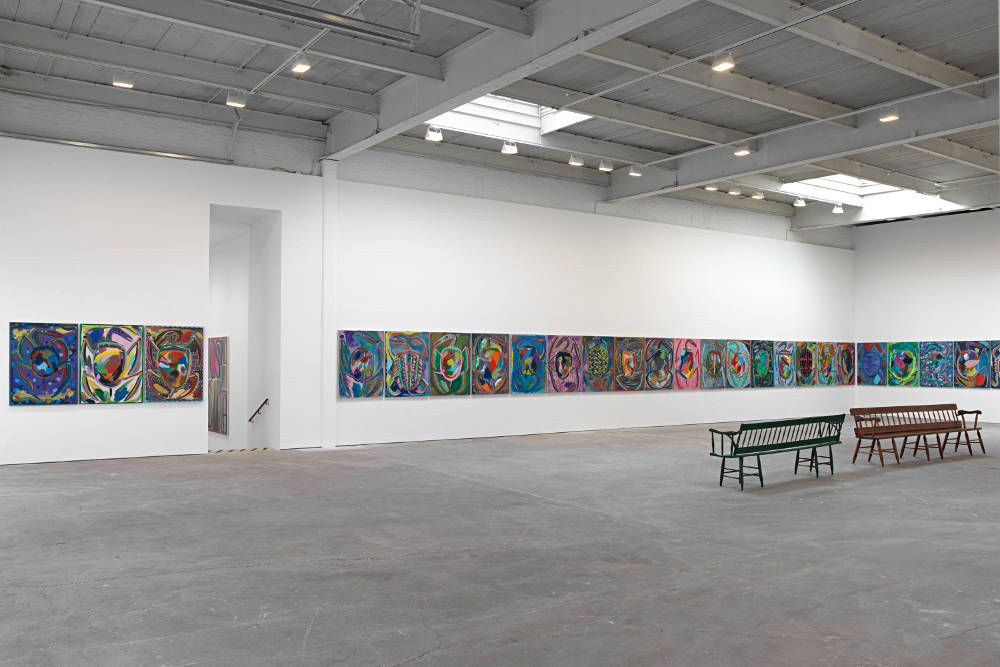 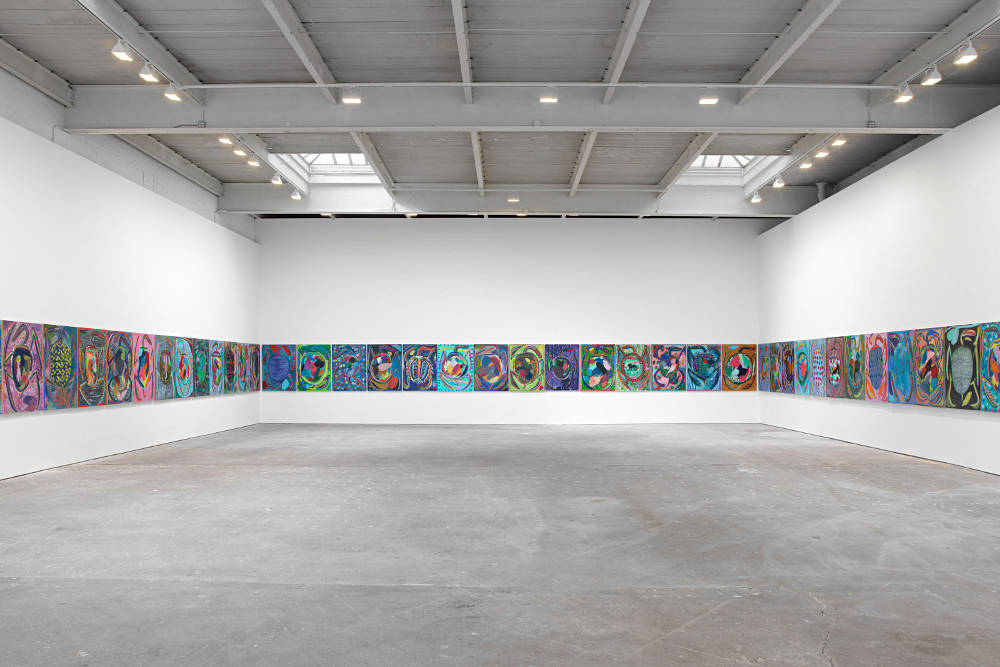 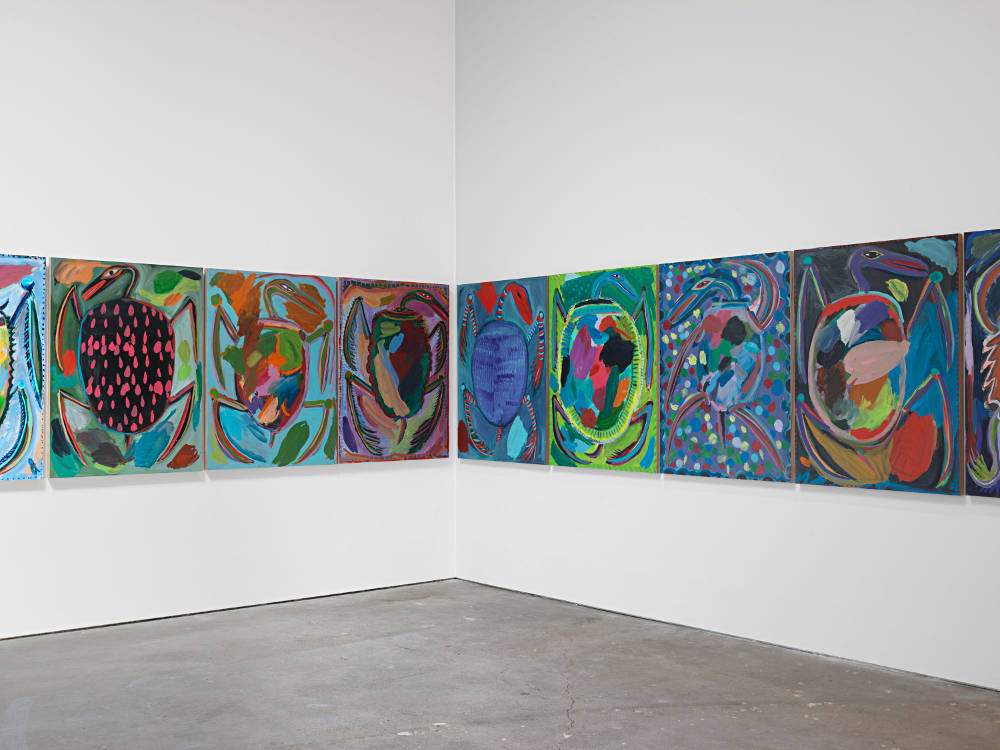 Since the early 2000s, Smith has developed a prolific and expansive body of painting that employs specific visual motifs as a means of exploring the potentiality of the painted surface. These visual forms, which include his name, fish, skeletons, leaves, and palm trees, among others, serve as unassuming structures through which Smith pursues his investigation of the medium, resulting in works that forthrightly present themselves to the viewer. Though fully realized as individual artworks, each painting serves as a stage in an ongoing, interrelated, and heterogeneous process of image production and experimentation, in which motifs, colors, and visuals are recycled, refined, and reimagined.

Emo Jungle features an array of new paintings by the artist, including several new “Reaper” paintings, part of an ongoing series that depicts the figure of death. Rendered in lush ribbons and fields of color, the blank, empty faces and shapeless cloaks of the reapers serve as genderless, formless ciphers for the viewer. These Reapers, several constituting the largest Smith has produced, are made additionally distinct by the unique border treatments that Smith applies. The borders allude somewhat to the artist’s interest in early American decorative wall stencils, as well as the serrated and perforated edges of postage stamps, which signify a kind of self-contained meaning or value.

Also debuting at the exhibition are paintings with entirely new motifs. One such group of works depicts a devil-like figure. Smith represents this character with a paintbrush, reaching to the corners and margins of the canvases, self-reflexively painting himself into the compositions. “Human Animals” are the focus of another series, which features primate-like creatures whose long limbs seem to stretch and determine the margins of the wide rectangular works. In another prolific new series, Smith explores the form of the turtle. In these paintings, the turtles’ shells morph into palettes—open-ended surfaces of endless possibility—where Smith mixes paint and experiments with facture and color. The group is presented in its entirety, uniquely installed in the gallery’s 519 West 19th Street space, so as to emphasize the similarities and differences between the individual works. Smith chose the turtle specifically because, as he states, “it’s a boring thing that I love.” Turtles, like the artist’s other motifs, remove the imperative to find meaning or be confounded by the artwork. “The meaning perhaps arises in the making,” Smith explains, “leaving the viewer something purely for their visual engagement. They don’t have to be burdened with the meaning. What they’re left with is purely for them. The viewer can love it; they can hate it, but they’re not going to walk up to it and feel dumb.” Throughout the gallery, Smith has installed groups of ceramic traffic cones, a form that extends his formal interests into the sculptural realm.

Smith’s work has also been included in important group exhibitions such as Painting 2.0: Expression in the Information Age, which opened at the Museum Brandhorst, Munich, and subsequently traveled to the Museum Moderner Kunst Stiftung Ludwig Wien (mumok), Vienna (2015–2016); The Forever Now: Contemporary Painting in an Atemporal World, The Museum of Modern Art, New York (2014–2015); The Painting Factory: Abstraction after Warhol, Museum of Contemporary Art, Los Angeles (2012); ILLUMInations, the central exhibition at the 54th Venice Biennale (2011); and The Generational Triennial: Younger Than Jesus, New Museum, New York (2009).