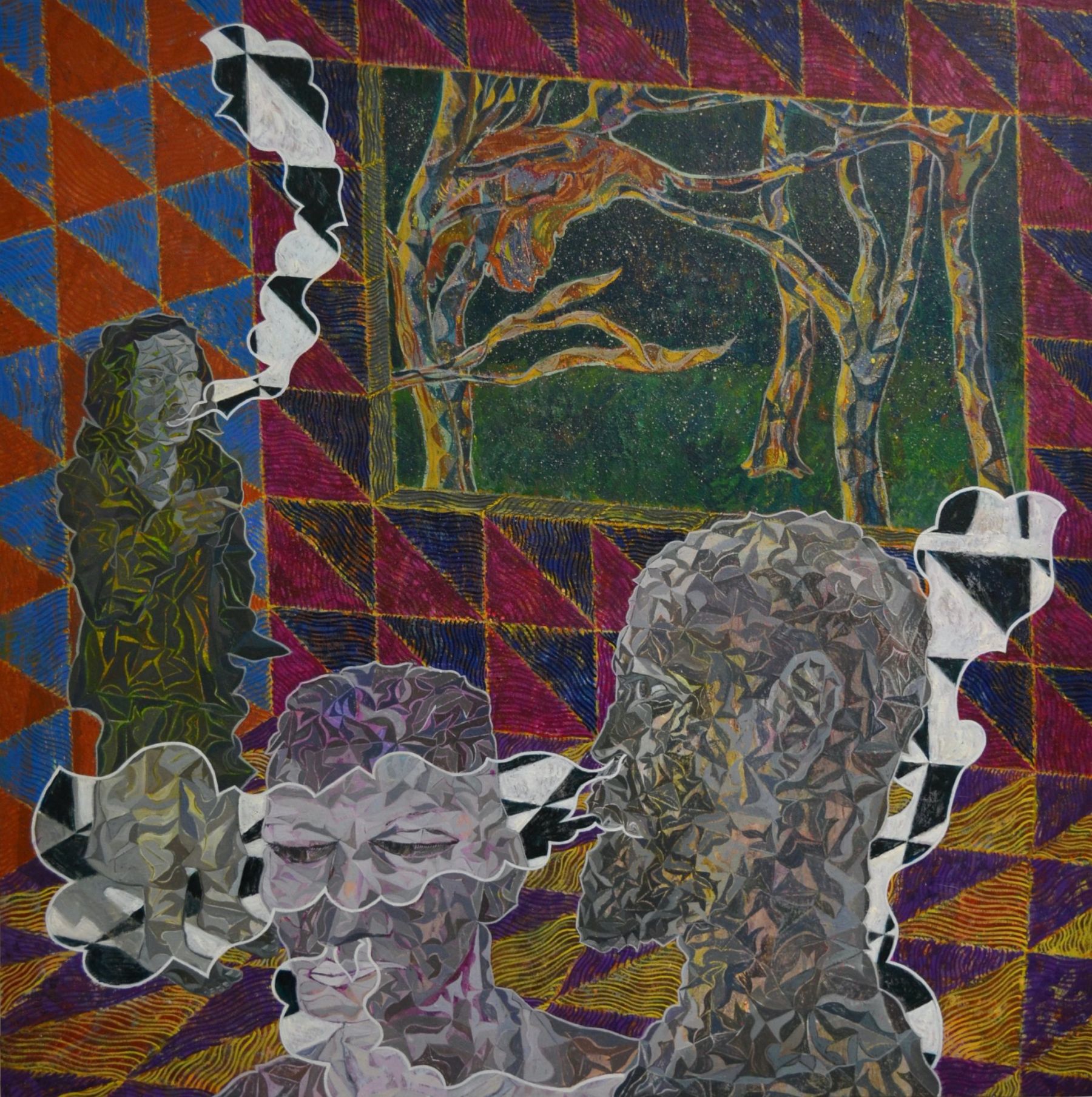 Between these paintings, Josh Raz depicts figures navigating environments that either contract or dilate. Each composition appears warped by a lattice of images and lines, ensuring any ground that figures walk upon is gradually revealed to be laid on precarious foundations. This instability is compounded by the imagery of each work oscillating between the familiar and the fabricated. In welcoming indecision, the paintings are consequently anchored in their failed attempts at clarity. These aesthetic qualities are mirrored by some of the more intimate concerns of Raz’s current work.

Primarily, the paintings reflect the negotiation between individualism and a desire to connect with others. By extension, they address a cultural shift from valuing external fact towards prioritising our individual emotions as a measure of reality: the idea that ‘if you feel it, then it is true’. Within some paintings, scenes are constructed that show external experience becoming increasingly walled off. Other paintings hint that this exists in tandem with our internal experience being given new avenues to explore: each road winding over another in a one-way spaghetti junction that coils inwardly, towards the self.

At times, temporary rushes are sought to hot-wire a getaway, or perhaps to re-experience ourselves, or to re-establish our closeness to others. Within some of these paintings, the scenes crystallise the desire to flee from quotidian regularity and to seek ecstatic experiences as a means to this end. Their static nature hints that the expanded internal awareness offered by these rushes is enticing, yet always fades with time’s arrow. This in turn endows some paintings with a bathetic quality. Amongst the paintings shown there is numbness and its embrace. Found also is a refusal to accept this state and an attempt to depart and search for something new.

Since winning the Hix Award in 2016, Josh Raz has been featured in GQ magazine (May 2017) and produced two solo shows, The Atrophy Experience, held at Hix Gallery, London in 2017 and Hubris and a Whimper, held at Abject Gallery, Newcastle upon Tyne in 2018. Between these two exhibitions, Raz has completed a residency in Al Cuz Cuz, situated in the mountains of Malaga, Spain and participated in a number of group shows. Most recently, Raz exhibited at Christie’s and Unit London as a part of the group shows ‘Uncovers’ (2019) and ‘Beyond Borders’ (2019/2020).