Sean Kelly presents ‘Existential Time’, Joseph Kosuth’s eighth solo exhibition with the gallery. This presentation, which approaches the problem of time and existence employing a selection of literary references, brings together a series of new works throughout the main gallery. 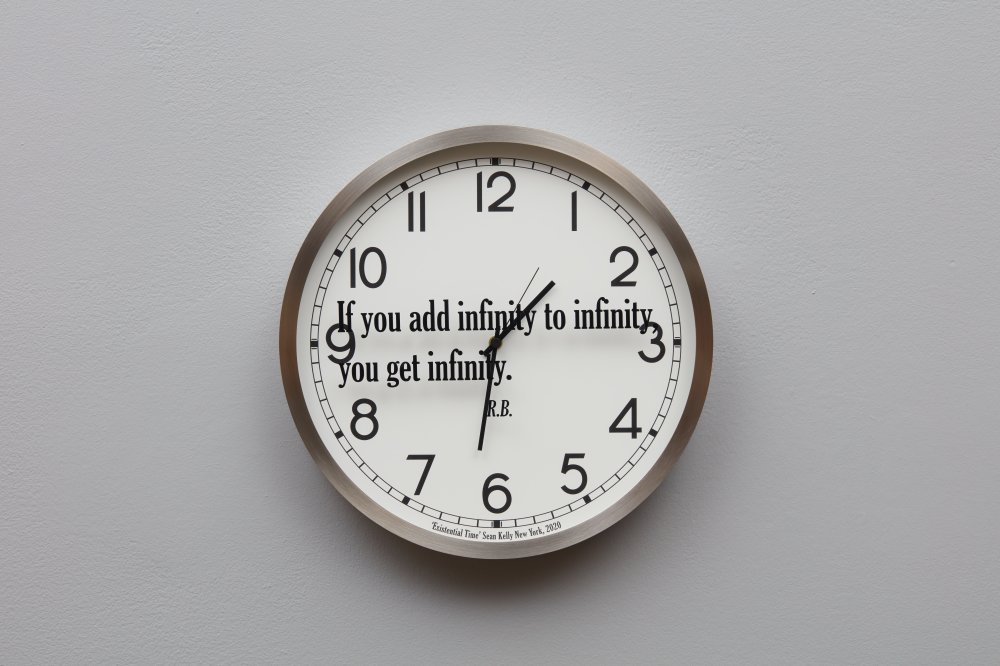 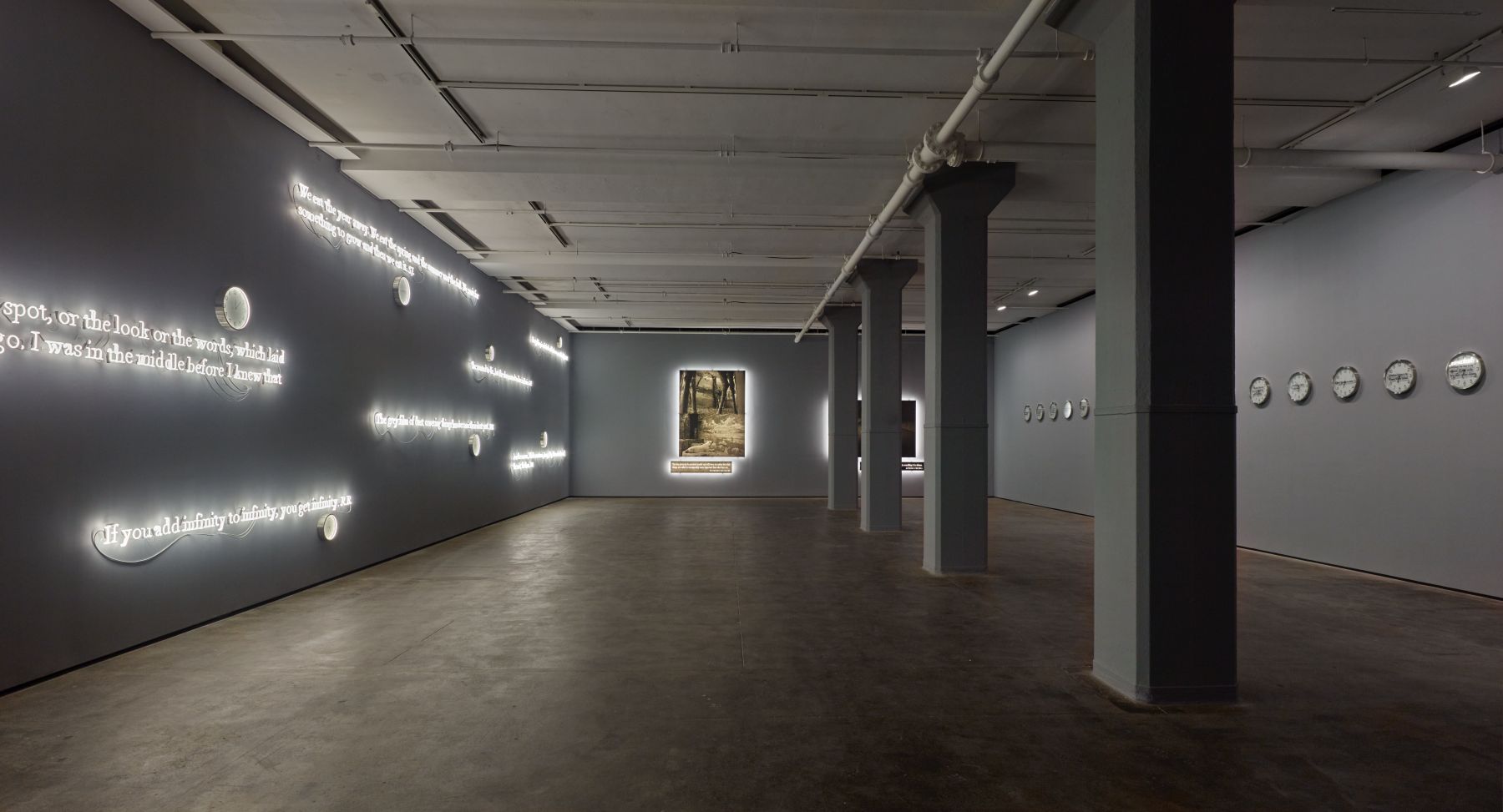 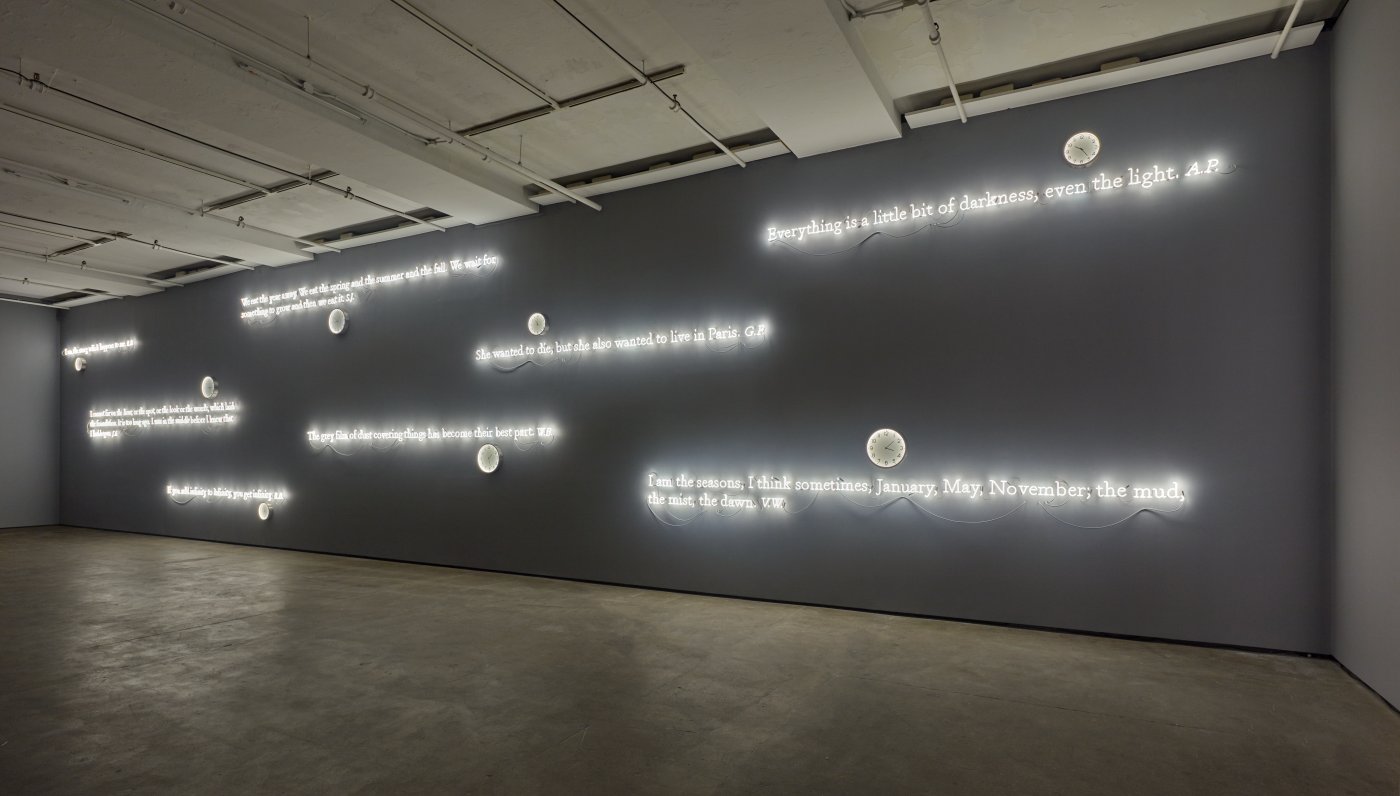 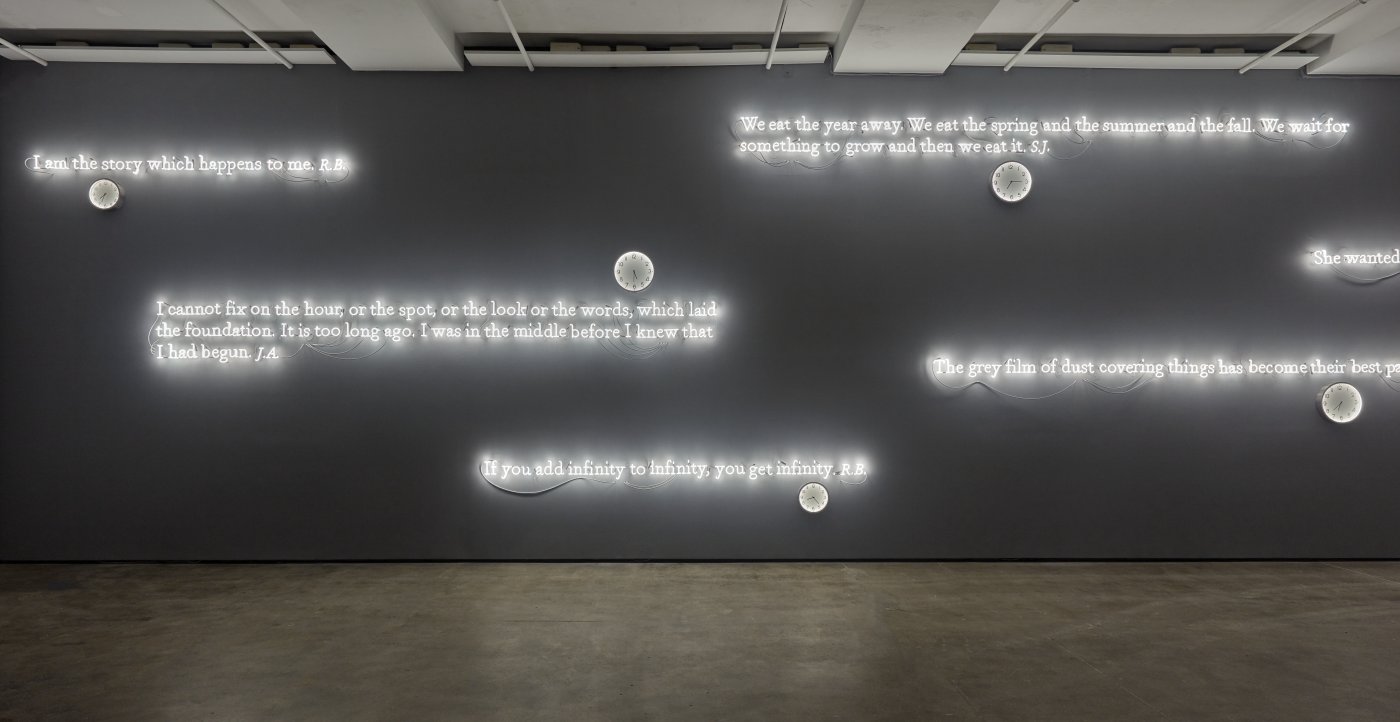 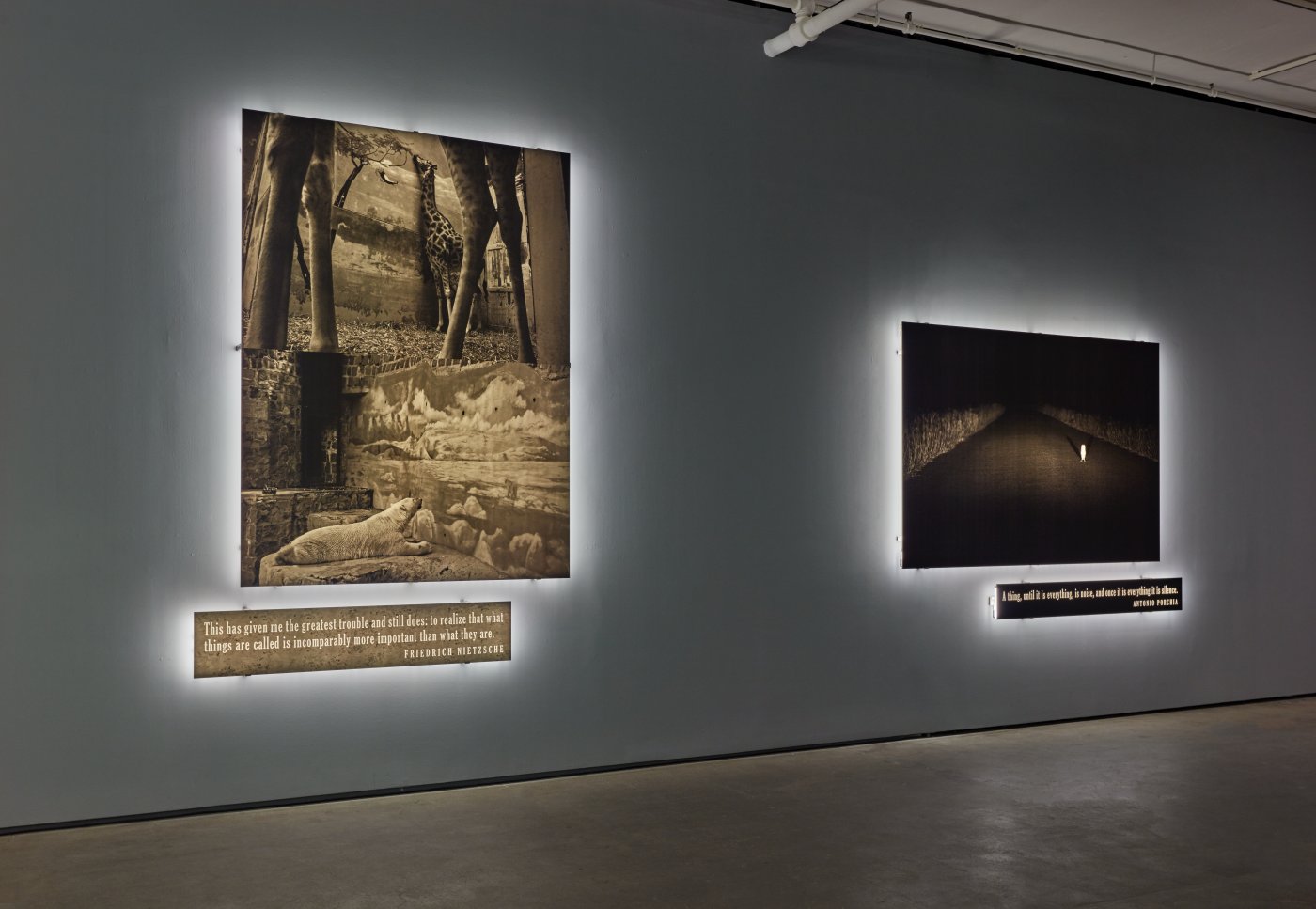 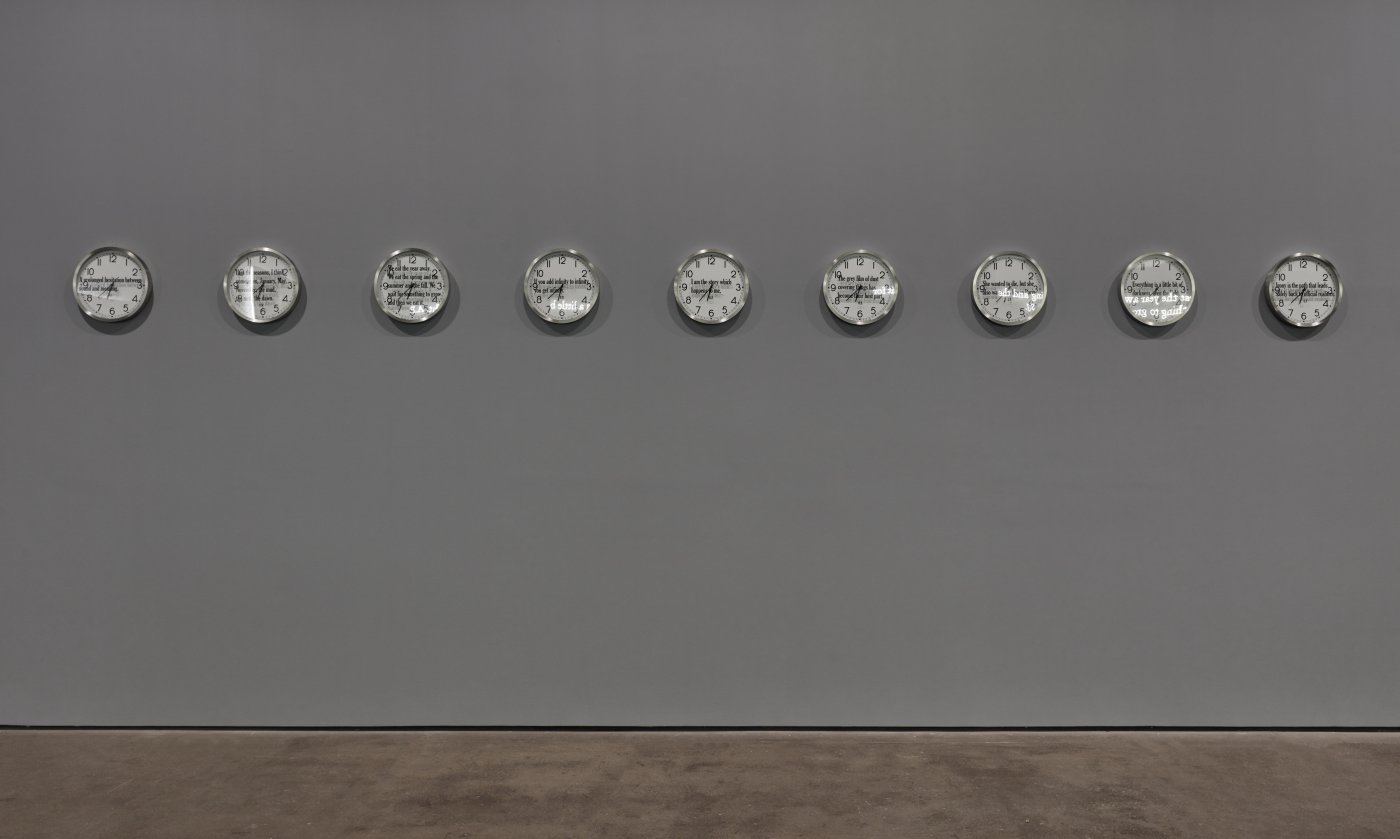 Joseph Kosuth, one of the pioneers of Conceptual art and installation art, has initiated language-based works and appropriation strategies since the 1960s. His work has consistently explored the production and role of language and meaning within art. His reflection on time stems from both a personal and philosophical concern with finding meaning within the various contexts and narratives life provides. It is thus also an investigation into the process of making meaning in artistic practice. Kosuth anchors and provides the tempo for the viewer/reader’s fluid experience of the exhibition through the use of the analogue clock. Time is thus referenced both literally and figuratively.

Kosuth removes the necessity of an objective shared truth while experiencing the work and highlights the freedom, choice, and responsibility inherent in everyday experience as well as in an artistic practice in general. The exhibition as a whole is a reflection on the gap that holds together beginnings and ends. Kosuth’s ‘Existential Time’ endeavors to punctuate the lack, limits, and surplus of meaning surrounding the narrative experience of time and life, while exploring the powerful and finite territory of the present. Kosuth states, “As artists we all begin to construct with what is given. We appropriate fragments of meaning from the detritus of culture and construct other meanings, which are our own.”

Joseph Kosuth lives and works in New York and London. Kosuth’s internationally recognized work has been the subject of solo exhibitions at institutions including the Multimedia Art Museum, Moscow, Russia; the Kunstmuseums Thurgau, Warth, Switzerland; Haus Konstruktiv, Zurich, Switzerland; the Australian Centre for Contemporary Art, Melbourne, Australia; and the Louvre Museum, Paris, France amongst others. He has also been invited to participate in numerous installations, museum exhibitions, and public commissions including Documenta V, VI, VII and IX (1972, 1978, 1982, 1992) and the Biennale di Venezia in 1976, 1993, 1999 and 2007. Most recently, in 2019 Kosuth installed a permanent public installation at the Miami Beach Convention Center, Miami, Florida and Bill Graham Civic Auditorium, San Francisco, California. His work is featured in major private and public collections including the Museum of Modern Art, NYC; the Tate Gallery, London; the Solomon R. Guggenheim Museum, NYC; the Whitney Museum of American Art, NYC; the Van Abbemuseum, Eindhoven; the Stedelijk Museum, Amsterdam; the Louvre Museum, Paris, France; the National Gallery of Victoria, Melbourne; the Museum of Contemporary Art, Sydney; the Centre Pompidou, Paris; and the Galleria Nazionale d’Arte Moderna, Rome amongst many others worldwide.