​…art is a weapon, more than an aesthetic problem, manifesting something from oneself. Making art means discovering what exists and not be afraid of it.

Tapestries is a solo retrospective of pioneering Catalan artist Josep Grau-Garriga (1929-2011). This is the artist’s first solo exhibition in New York since 1983 and features experimental tapestries from 1970 to 2011. 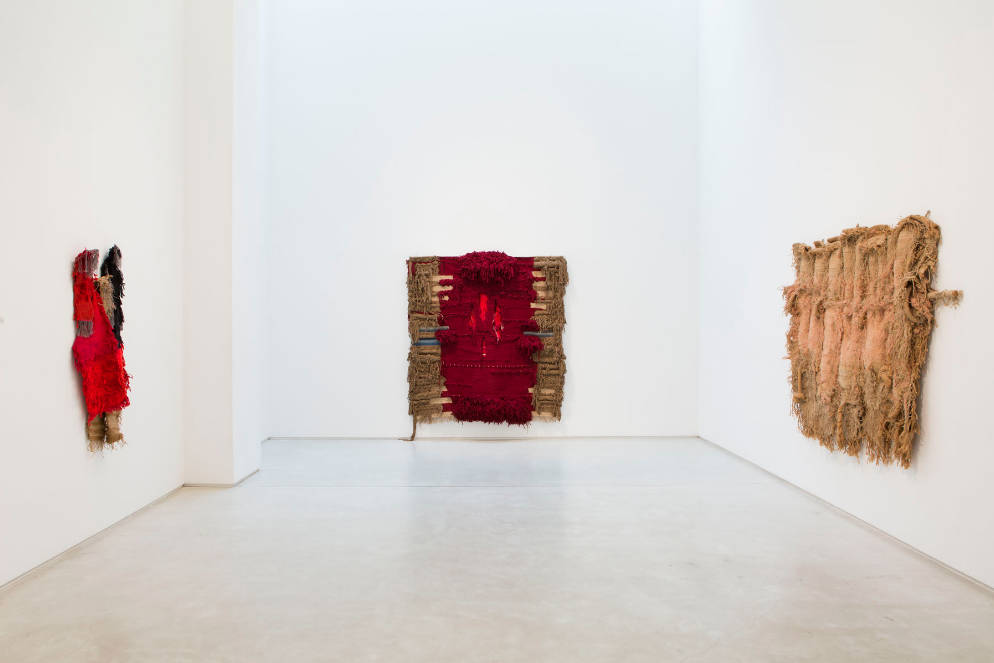 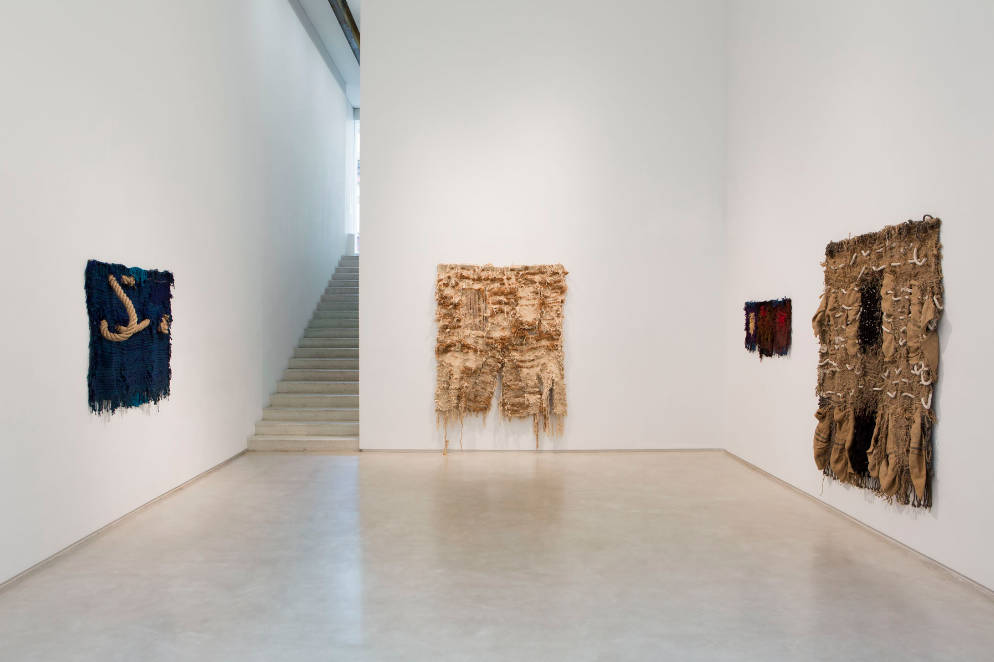 Tapestries celebrates his elevation of the form from craft to art and his avant-garde approach to textiles, reflecting upon the political context of his practice.

Grau-Garriga grew up on a farm in Sant-Cugat-del Valles, near Barcelona. He was the grandson of an anarchist hairdresser and the son of a Republican farmer. At the age of seven, the Spanish Civil War broke out; when he was 10 years old, his father was arrested and imprisoned by Franco’s forces. This fascist regime left indelible scars on the artist, and infused his art with drama, color, and the heroic and mystical voices of Catalonia. Grau-Garriga was influenced by the great Spanish painters Velazquez and Goya, who also took a political stance in their work. His 1970s tapestries, with red gashes and blue yarn, are his abstractions of wounds, bruises, and tears.

Grau-Garriga trained as an artist, studying painting between 1946 and 1952 at the Escola de Belles Arts de Sant Jordi, Catalonia. A quick hand, he was commissioned to paint frescoes at the Ermitage de Sant Crist de Llaceres in the traditional Catalan art style. In 1955, Grau-Garriga was invited to become the creative director and to lead an experimental workshop at Casa Aymat, his hometown carpet and tapestry manufacturer, changing the course of his practice. At the time, tapestry was a dying, slow, and costly art form associated with old aristocracy and religious practice. Under his direction, along with fellow weaver Jean Lurçat in France, the genre was revived. Grau-Garriga introduced a new dimension into the art of tapestry where he took the traditionally figurative flat form and eliminated its expensive materials such as gold threads and silks. He created abstract expressionist compositions made up of humble materials: animal and vegetable fibers, string, hemp, sisal, old sacks, and wool leftovers, as seen in Ferides I (Wounds I). This work cleverly interlocks blood red wool and earth-colored jute with blue accents in a range of different weaves, creating a multilayered textile sculpture. These developments revolutionized the genre and according to Grau-Garriga created a “tapestry of our time, harsh, that speaks to our history.”

In the late 1950’s, Grau-Garriga made frequent trips to Paris, where he traded techniques and ideas with Jean Lurçat. While in Paris, he discovered the work of artists associated with Art Informel, a pictorial movement that developed in Europe during the 1940s and 1950s with Jean Fautrier, Jean Dubuffet, Antoni Tàpies, and Alberto Burri. From then on, Grau-Garriga pushed the tapestry genre to its limit, giving up the preparatory cardboard cartoon design and taking up the loom himself. Mastering each stage of the production process gave him freedom to experiment fully. By the early 1960s, his weavings gradually developed into sculptural textiles and a tactile medium; Grau-Garriga saw his work as a volume in space. With great innovation, he explored the beauty of the backside of the tapestry, the messy underbelly of the work that is usually concealed.

Throughout the 1960s and 1970s, his experiments attracted weavers such as María Assumpció Raventós and Aurelia Munoz and led to the foundation of the Catalan School of Tapestry. Artists such as Joan Miró, Antoni Tàpies, and Pablo Picasso also flocked to Sant-Cugat-del Valles to work with Grau-Garriga. In 1970, Philippe de Montebello, a young American curator and future director of the Metropolitan Museum of Art in New York, mounted Grau-Garriga’s first major retrospective at the Houston Fine Arts Museum, after meeting him in 1969 while the artist was traveling in the United States on a grant. In 1987, by invitation of the painter Rufino Tamayo, Grau-Garriga visited Mexico. Reacting strongly to the political and social climate in the country, he created a monumental commission for the Museo Rufino Tamayo in Mexico City.

Grau-Garriga’s move to Anjou, France in the 1990s began a period of tranquility that was reflected in his practice. His work now evoked natural landscapes and spirited pleasures. The latest tapestry in the exhibition, Drap i més (Fabric and More), functions as a snapshot of Grau-Garriga’s career, highlighting interplay between bright and soft colors. The roughly woven and torn background of raffia and cotton echoes his Catalan period, while an appropriated piece of lichen green wool rests elegantly as the center, whereas the lower part suggests bark peeling off a tree. The work appears at once brutal and refined, becoming the high point of Grau-Garriga’s life-long groundbreaking experiments with tapestry.

Born in 1929 in Saint Cugat-del Valles near Barcelona, he moved to Anjou, France, in 1991 where he remained until his death until 2011.