How to construct something in common on a piece of land that is in perpetual movement? In an interview with Contemporaryand, a magazine focusing on African and diasporic perspectives in art, the artist, performer and writer Josèfa Ntjam (1992, FR) asked this question to define the focus of her practice, which employs assemblage – of images, words, sounds, and stories – as a method to deconstruct hegemonic discourses on origin, identity and race. ‘When you are forced to move in many different ways’, she explains, ‘things are less fixed, they become spongier, and what emerge as a result are hybrid forms, the need for dialogue, using syncretism and “plug-ins” (branchements or connections) as forms of construction.’ (1) 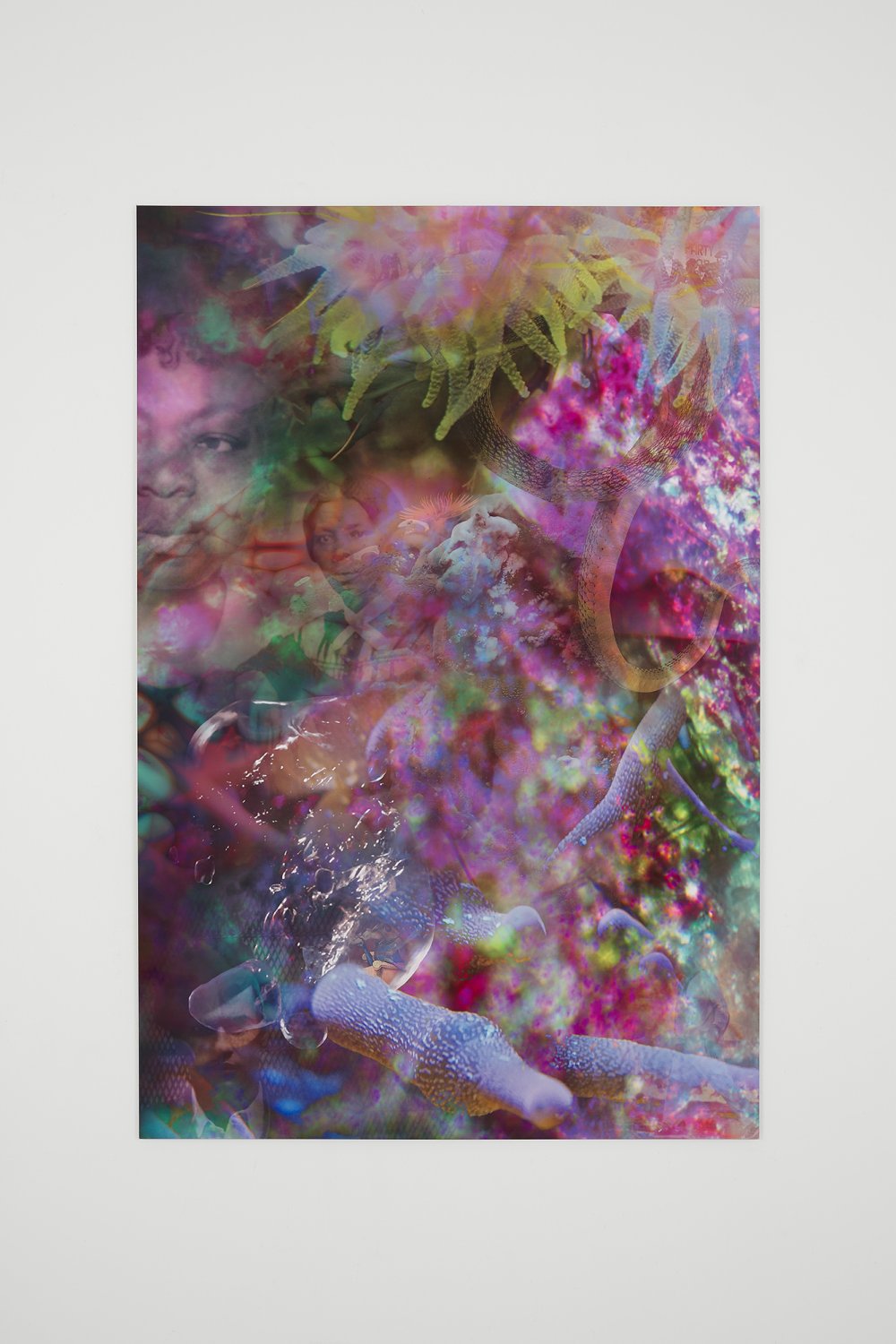 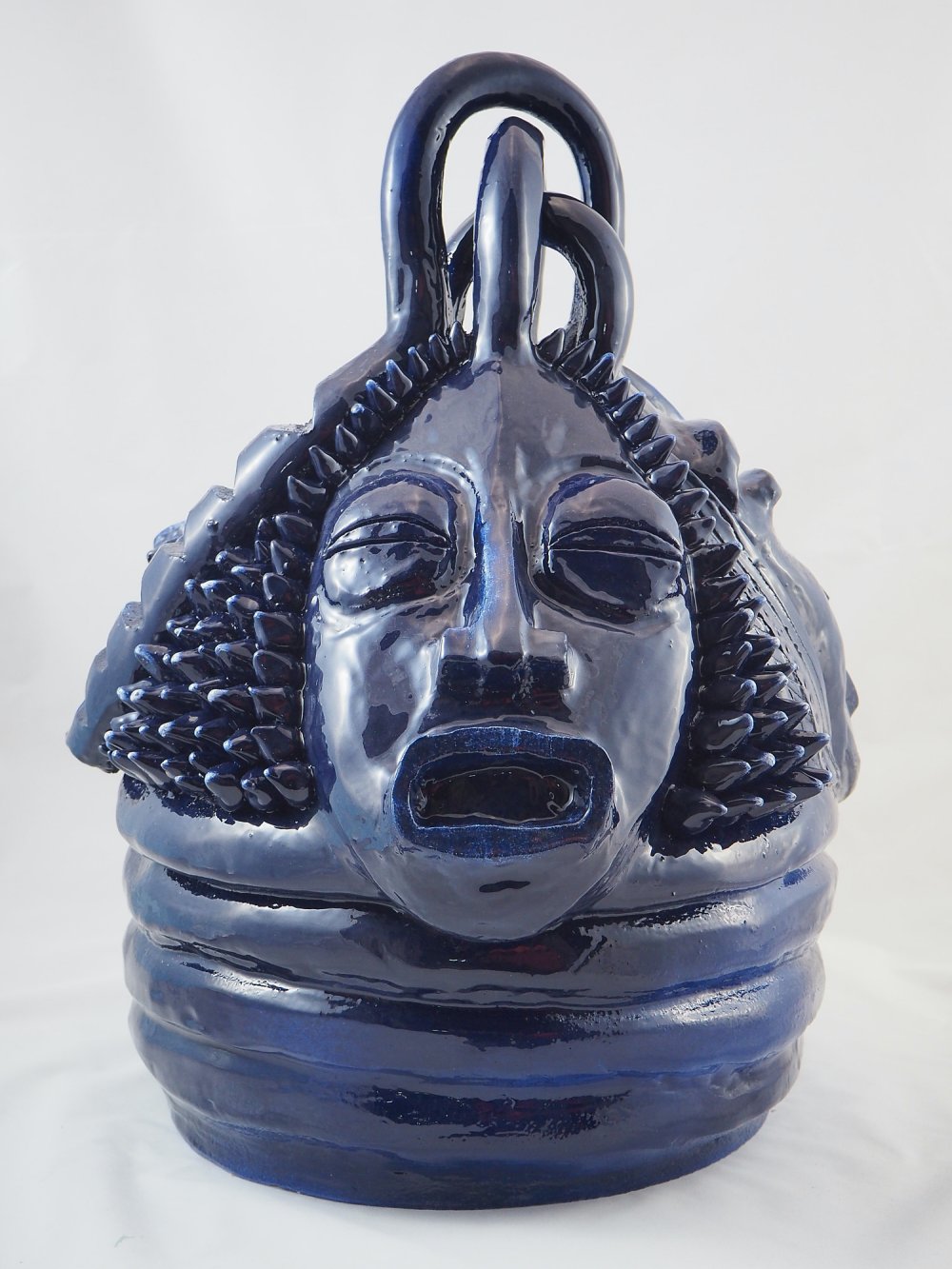 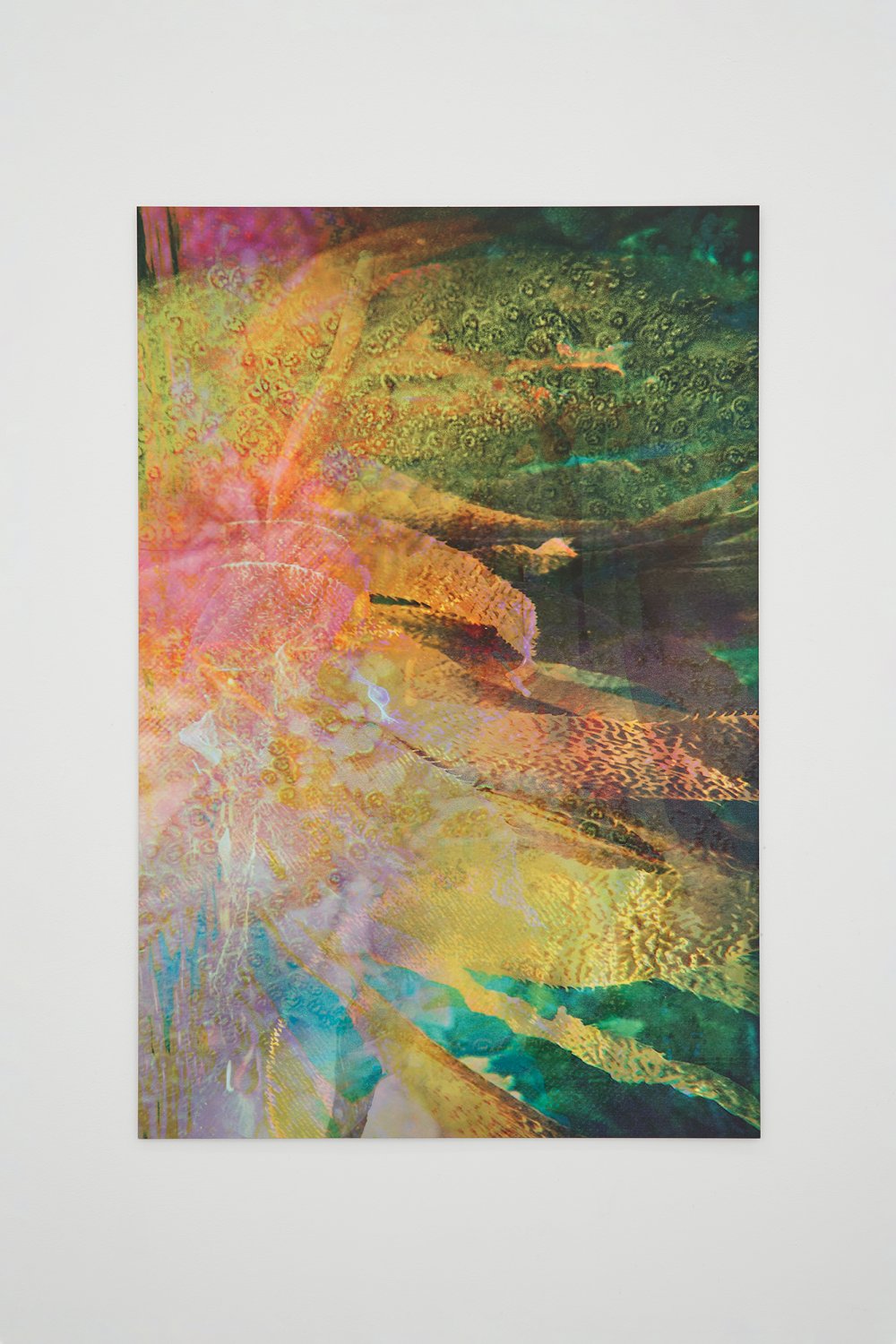 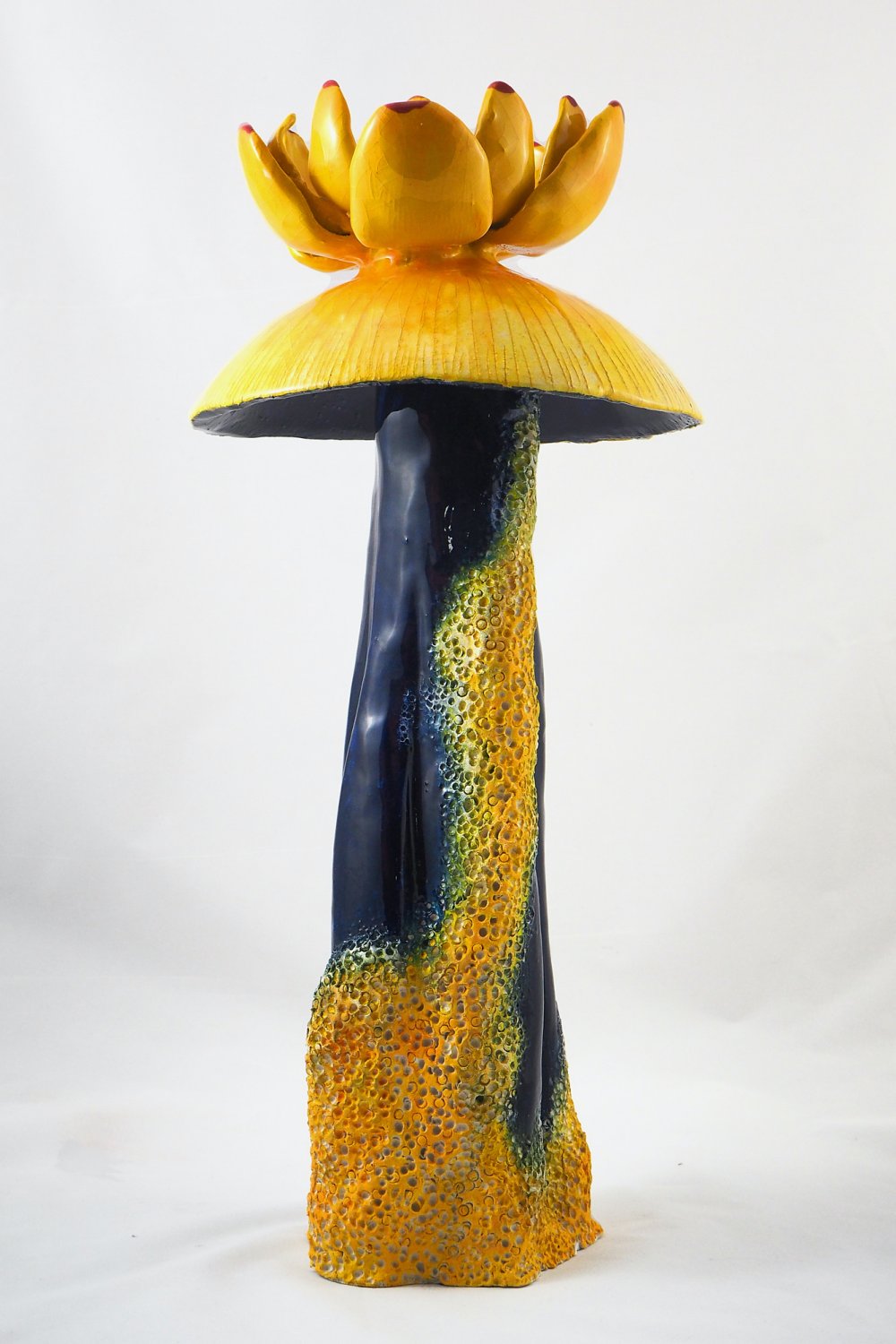 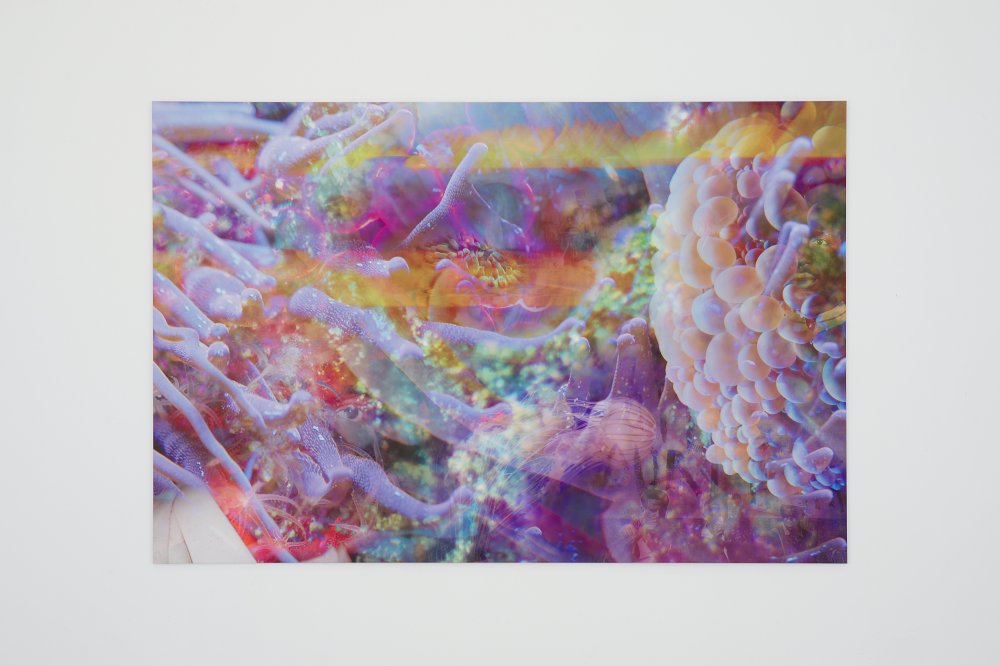 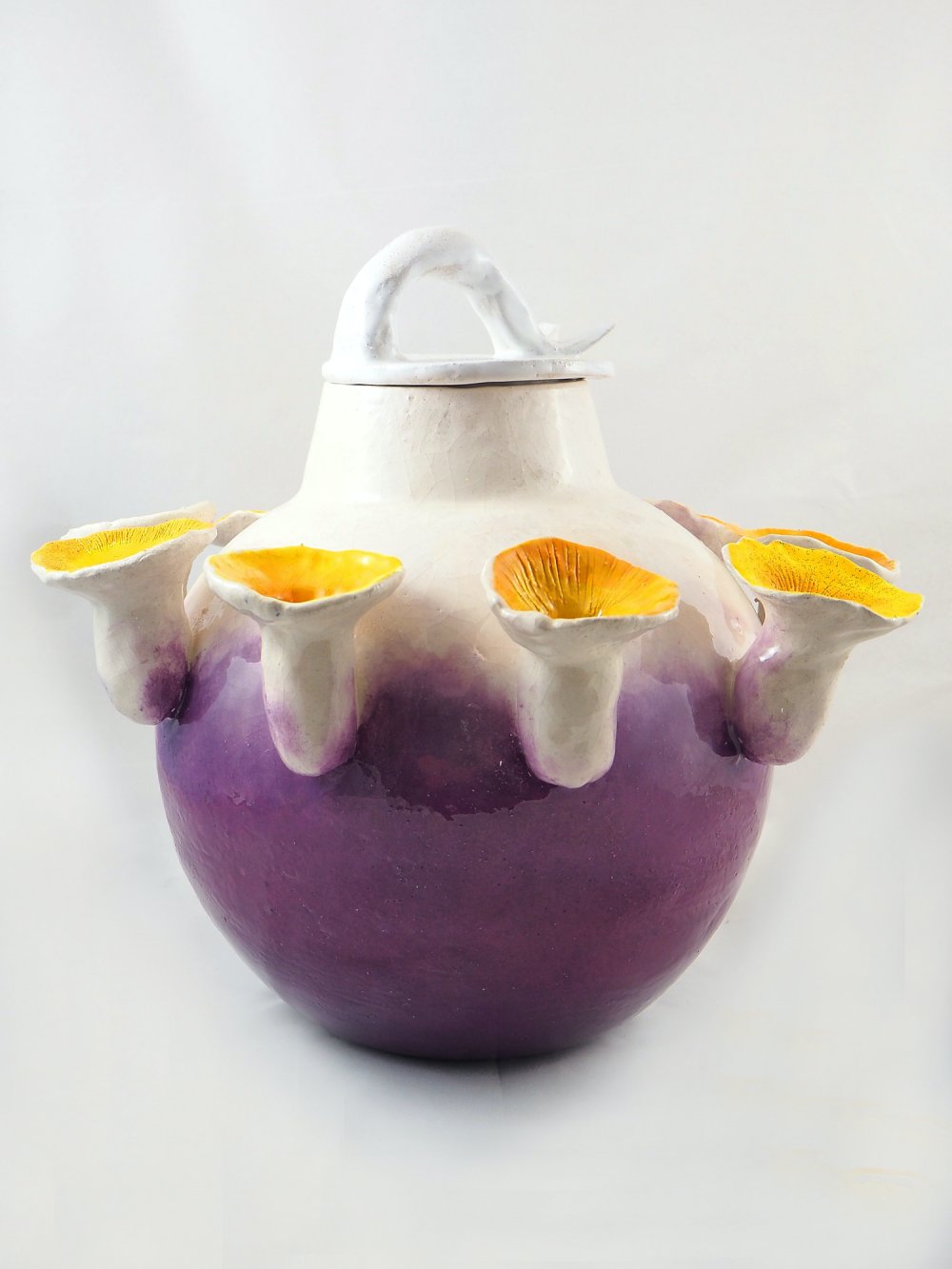 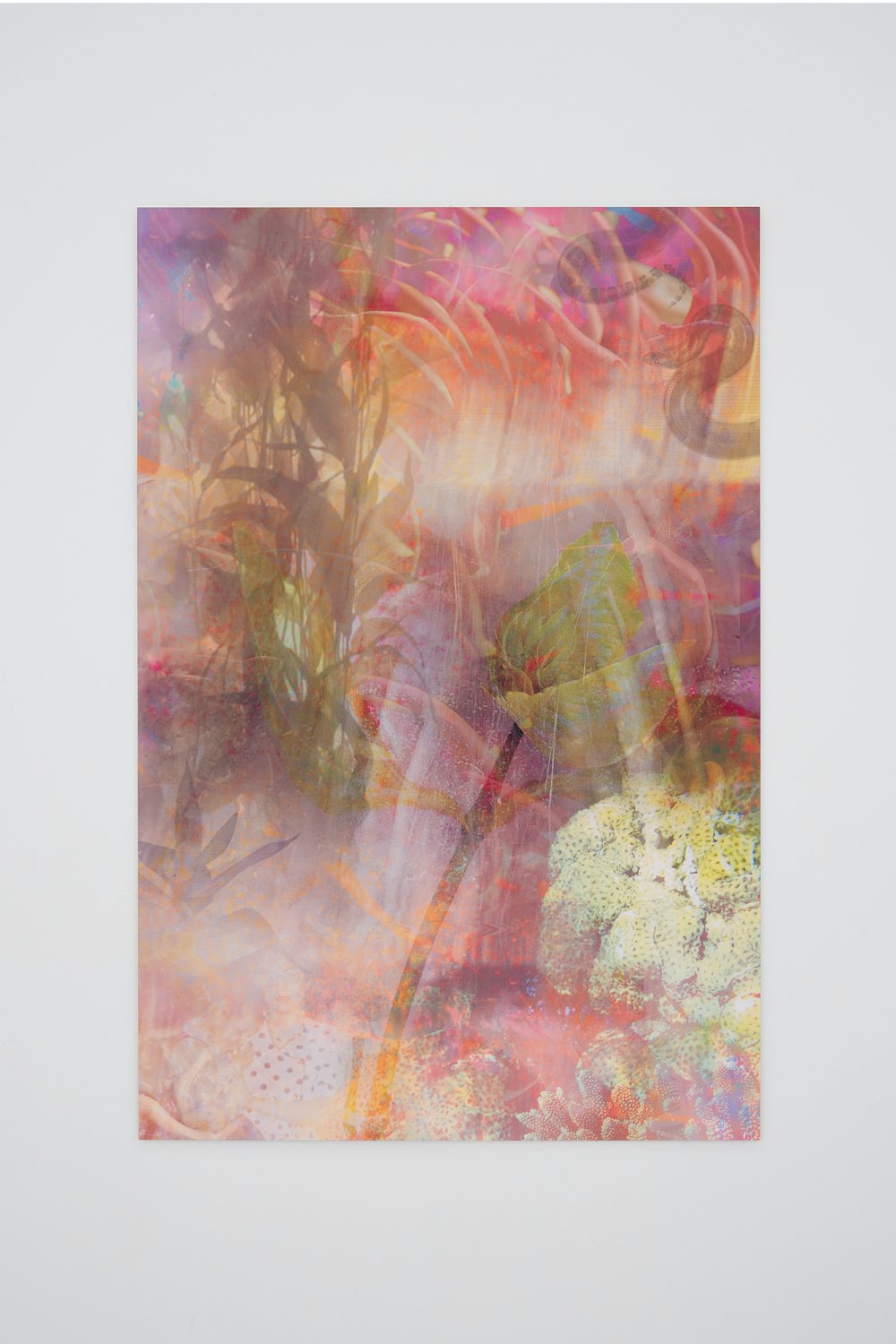 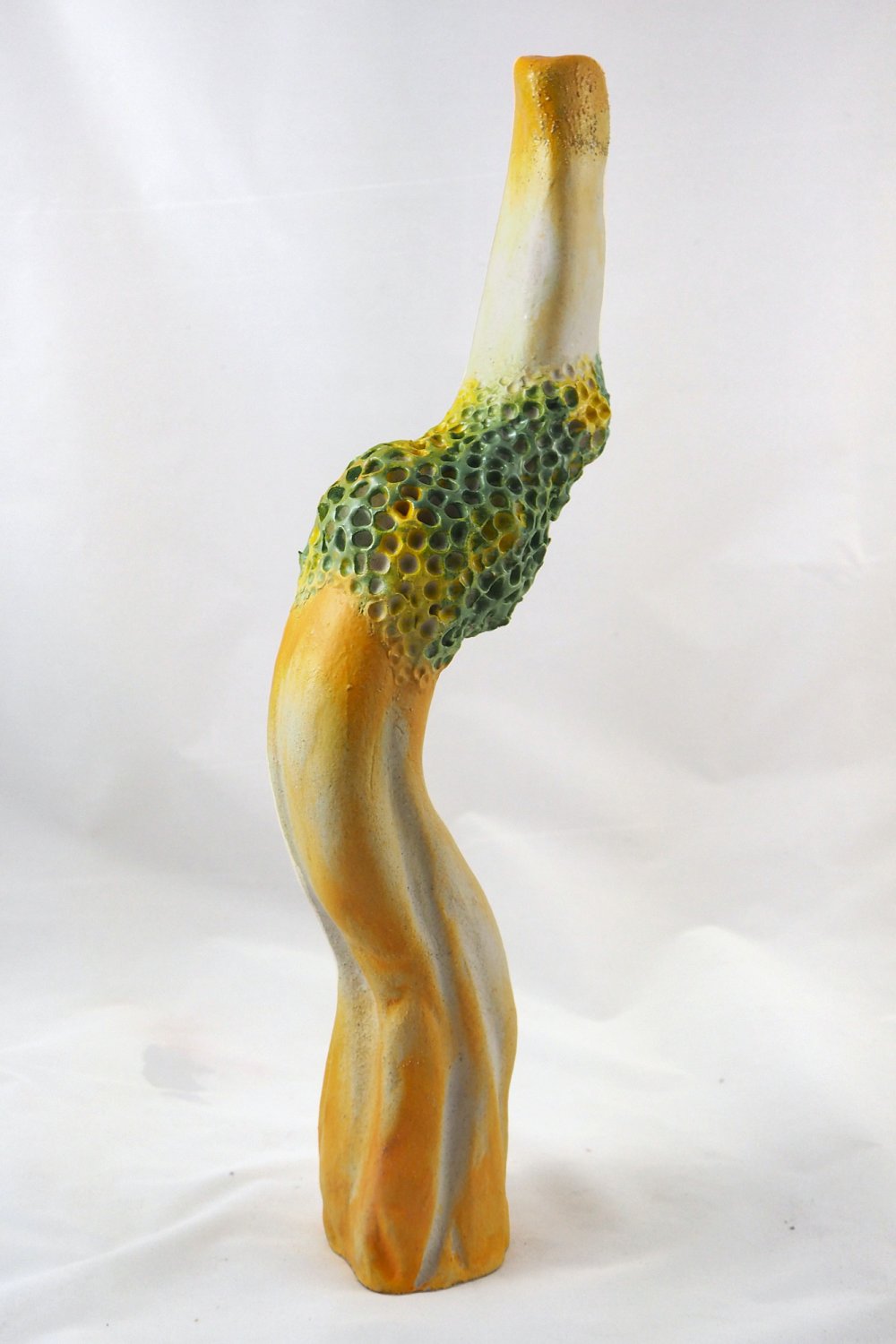 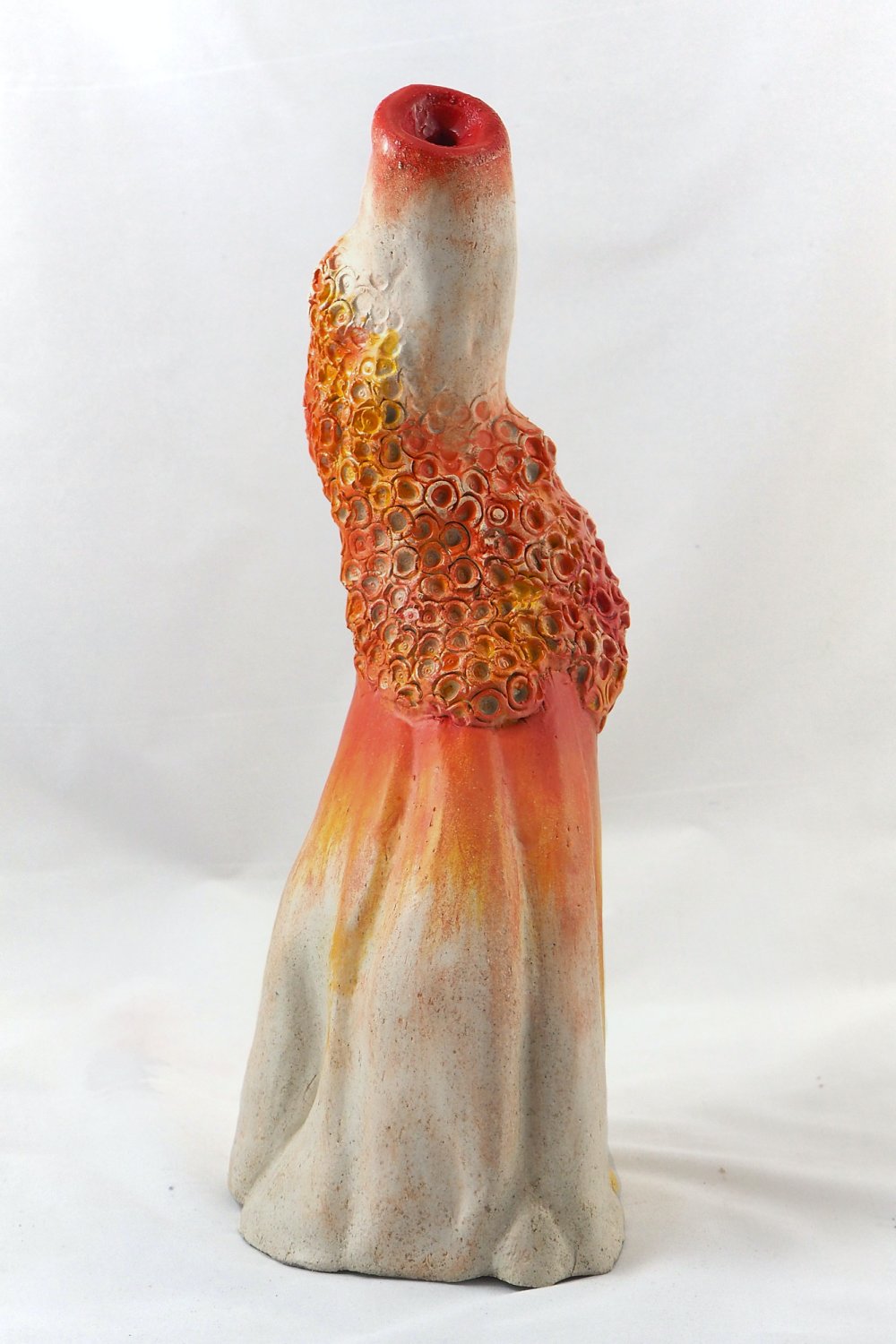 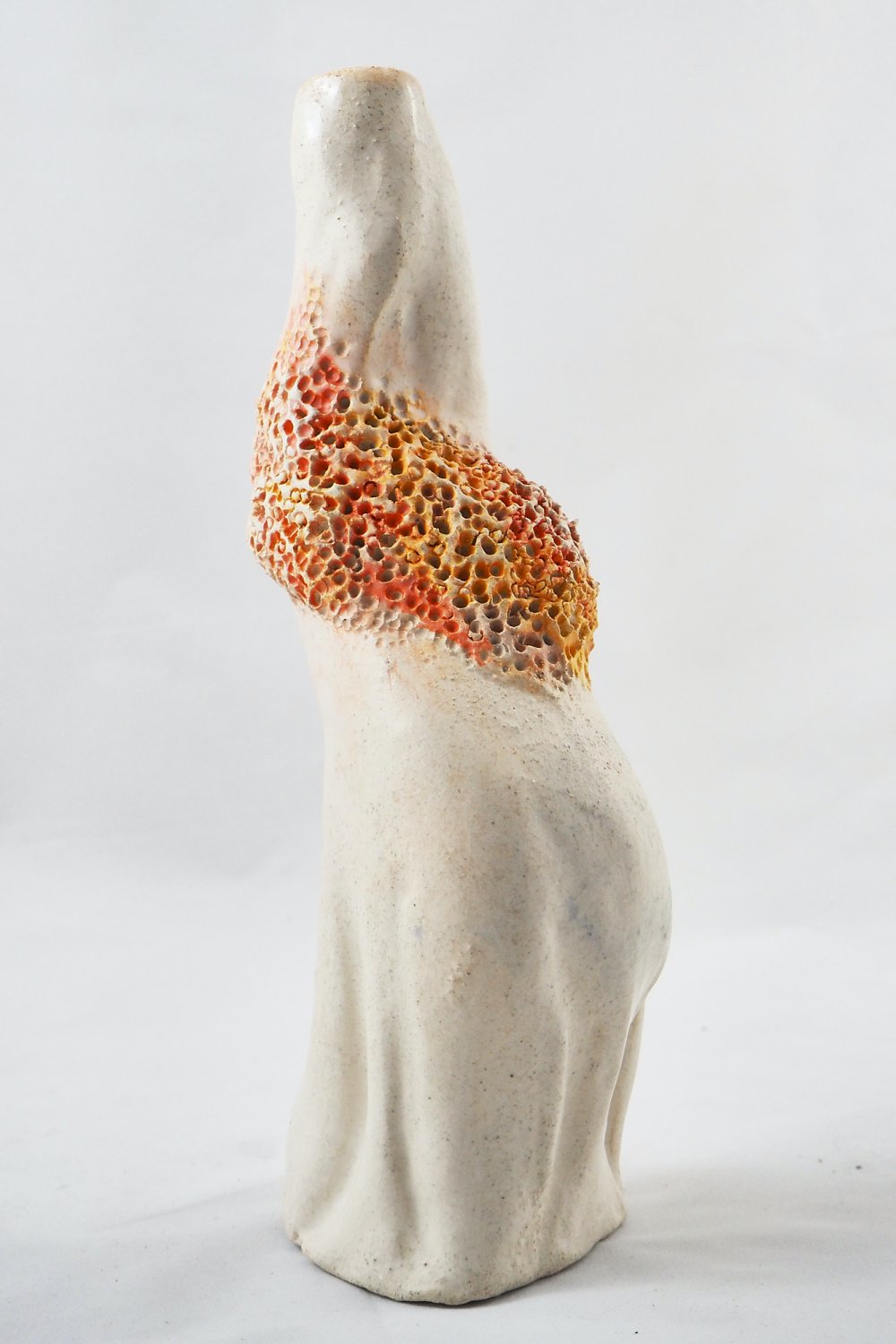 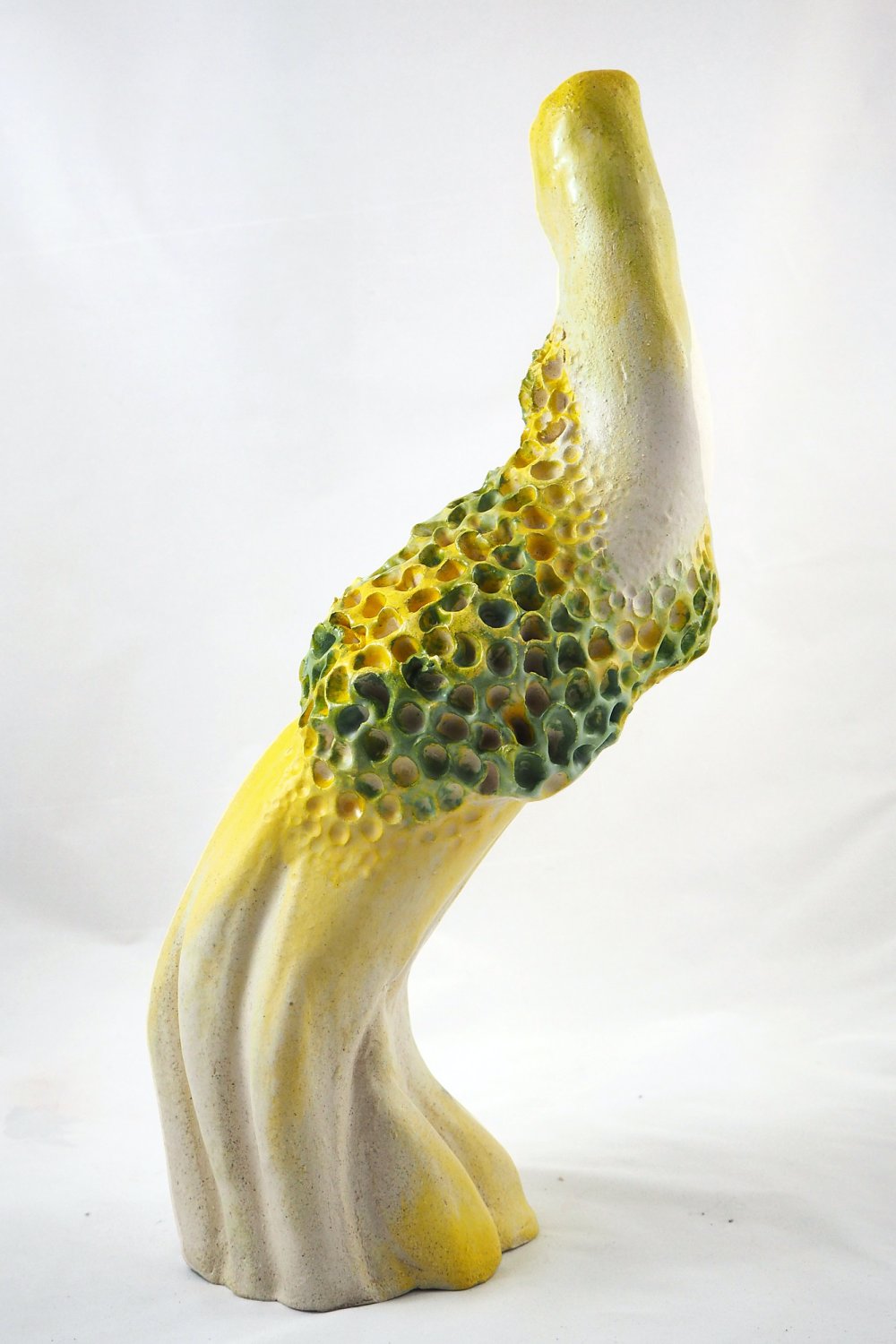 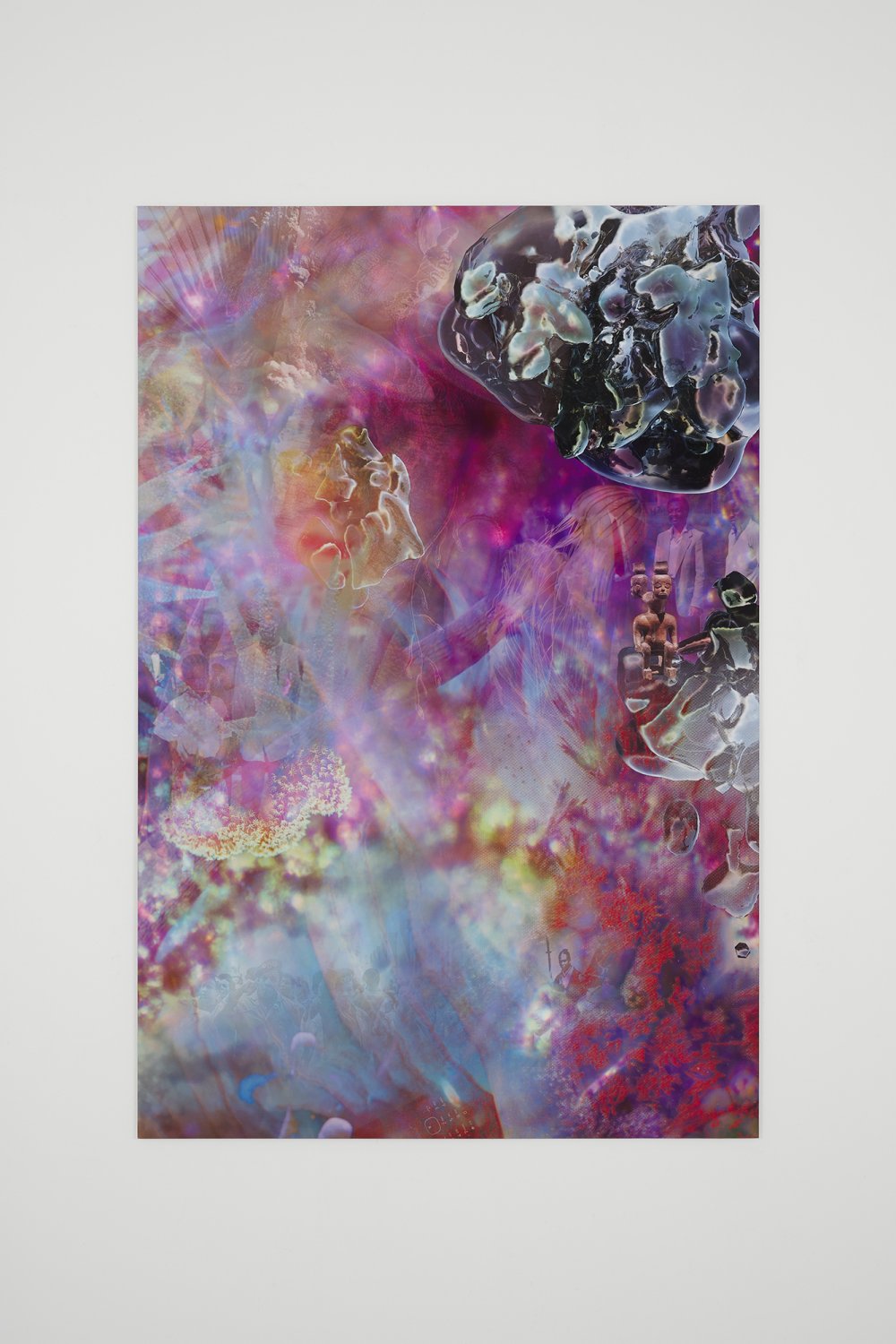 Series of 21 photomontages printed on Lama Li paper with bark and resin
Installation: c. 145 x 270 cm
This series of work is composed of a single image that the artist divided into 21 fragments that can be acquired individually or as a single artwork 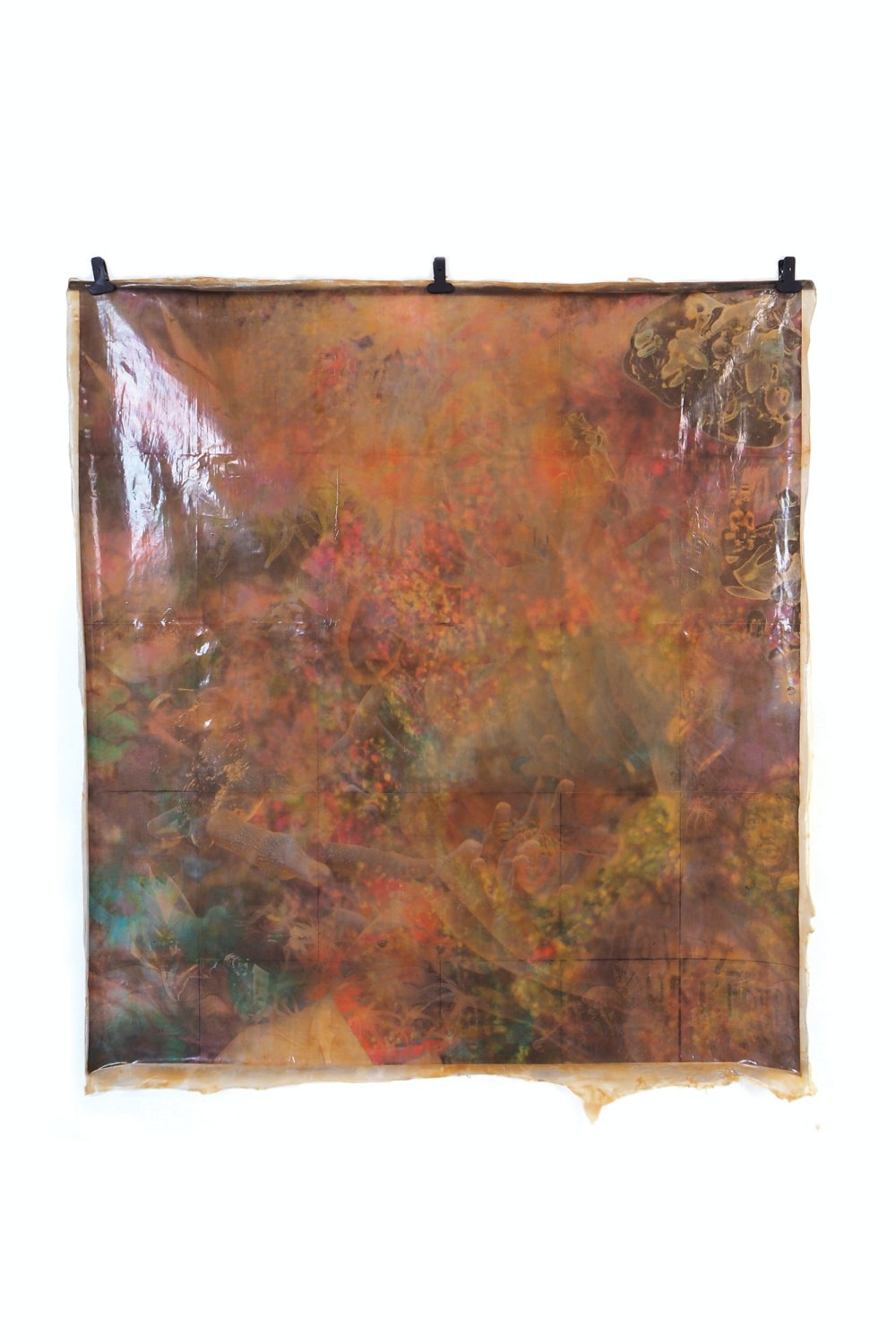 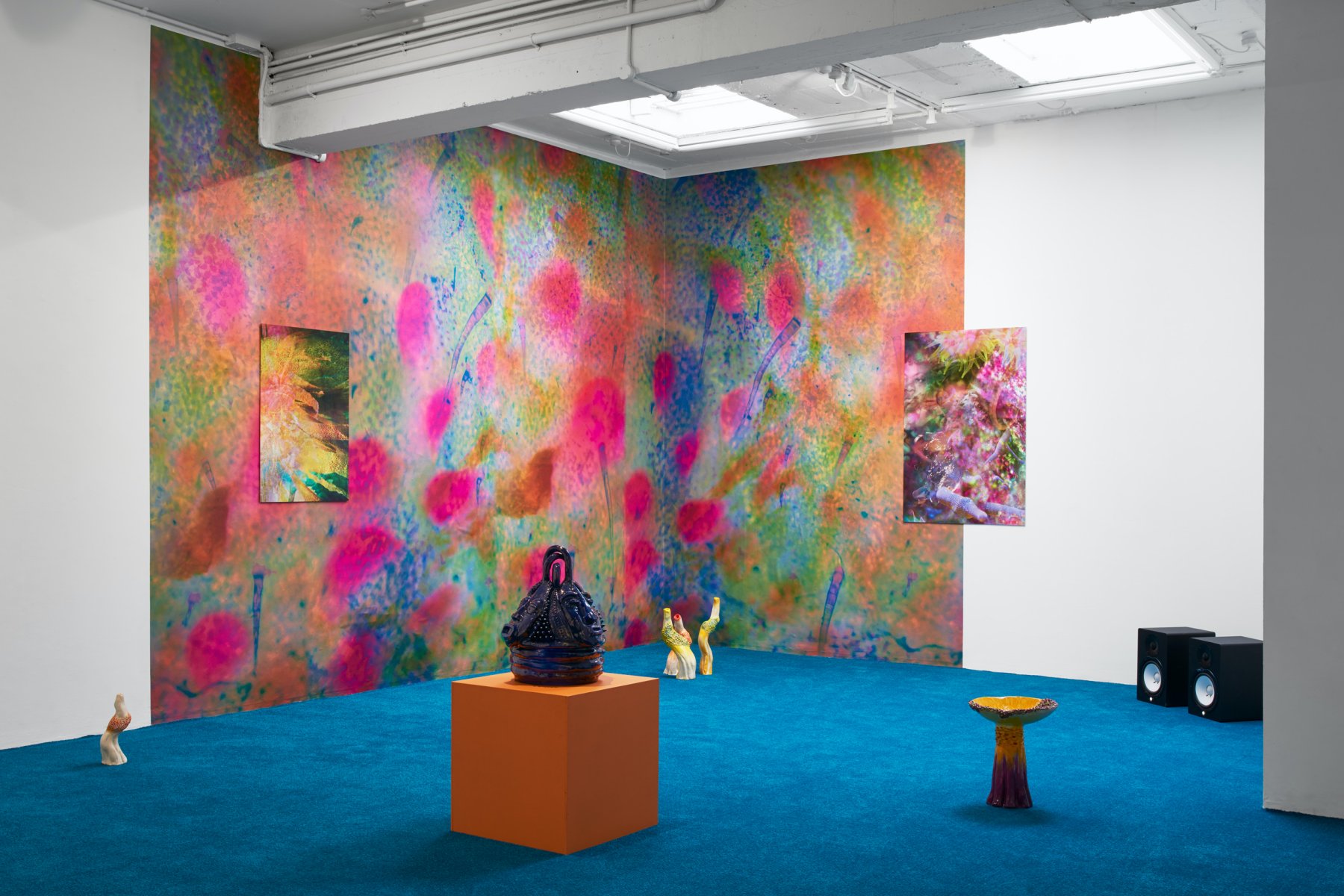 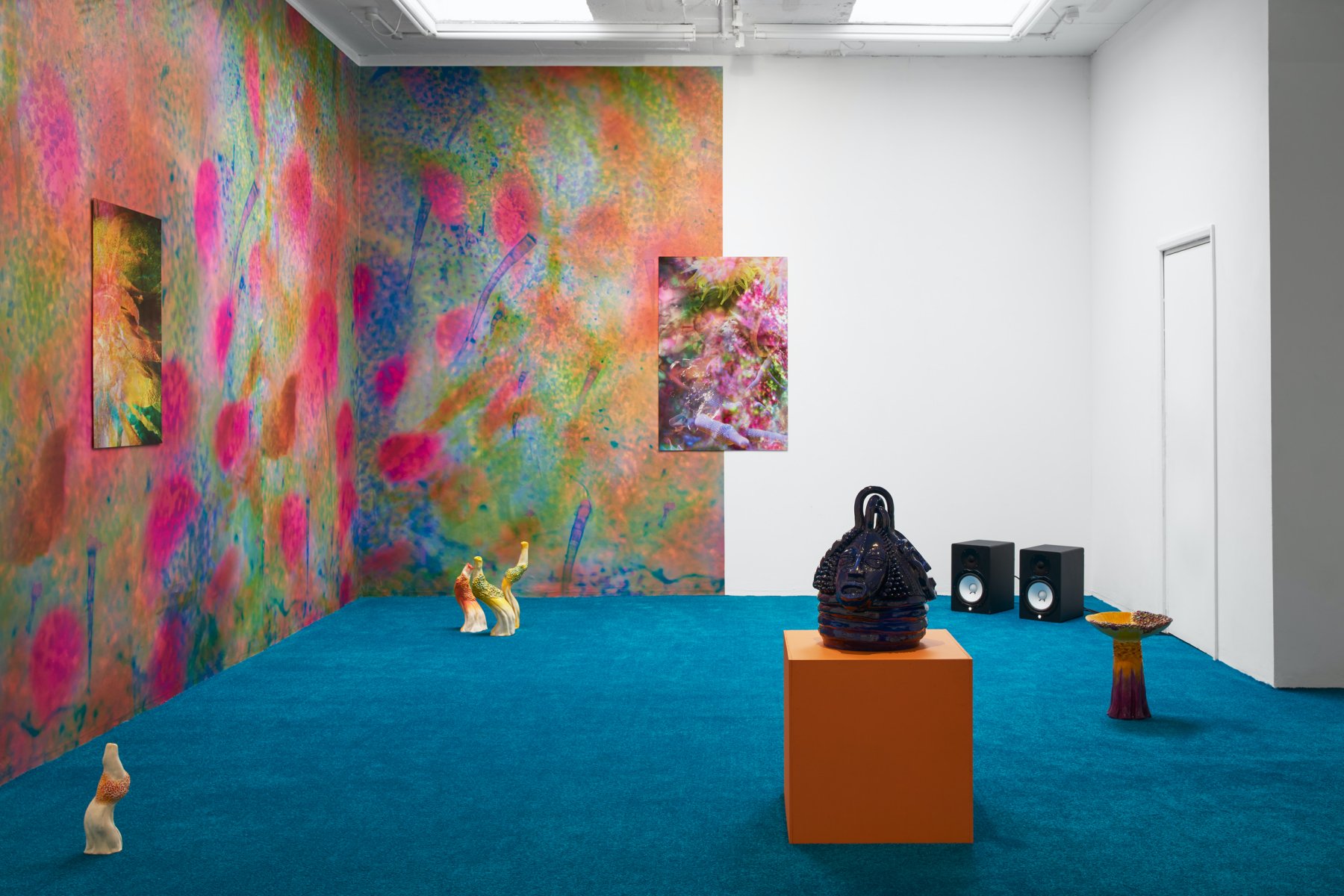 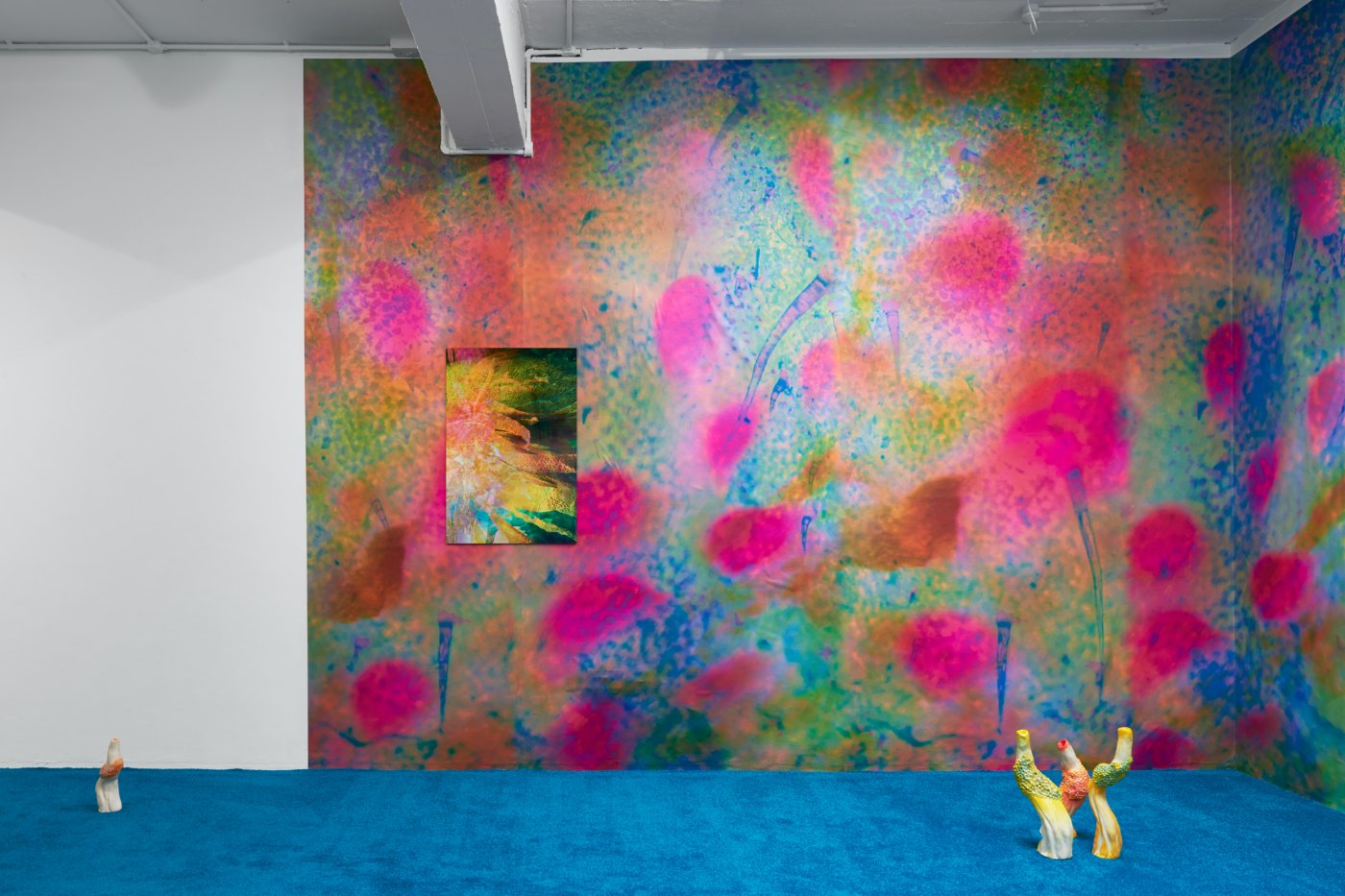 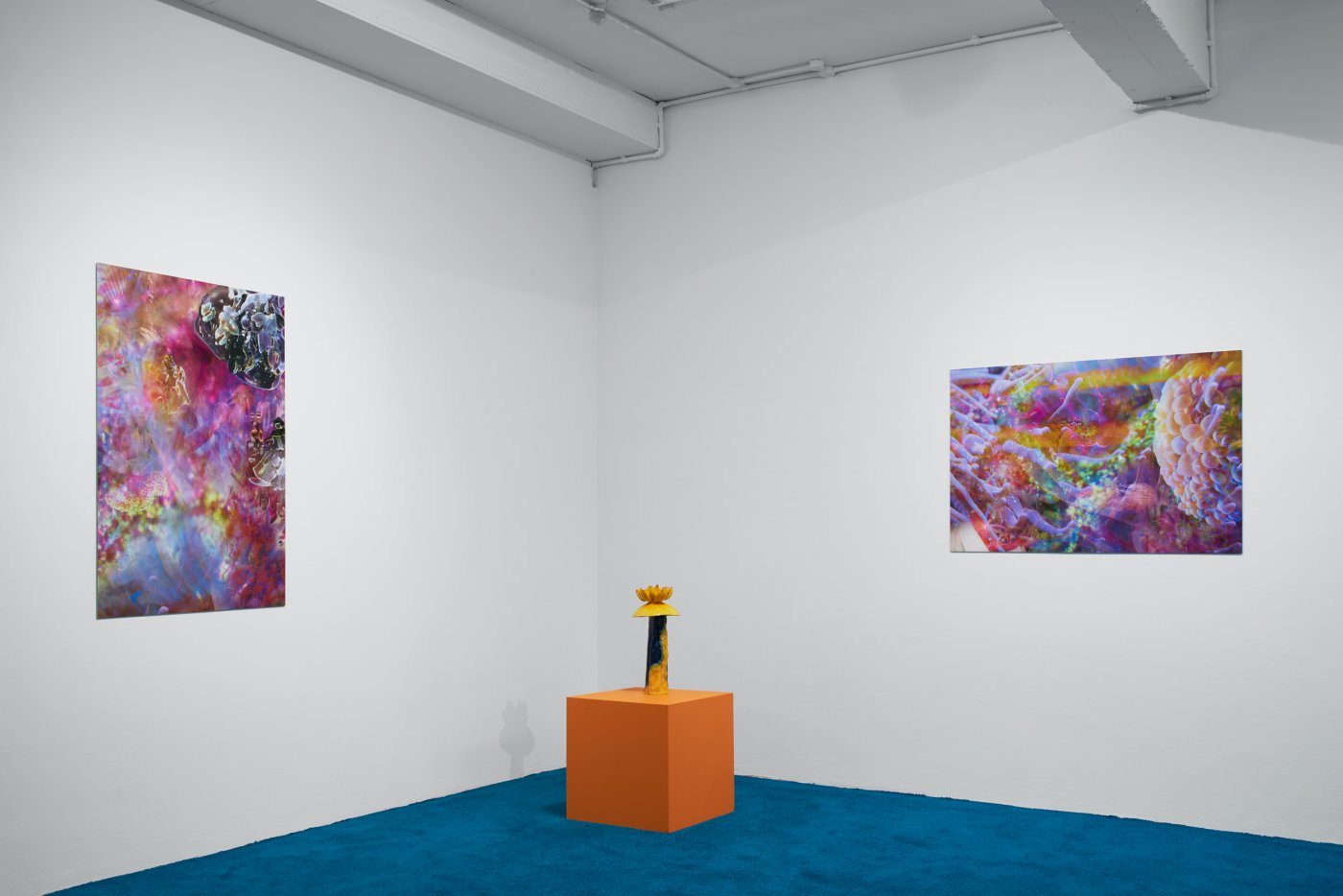 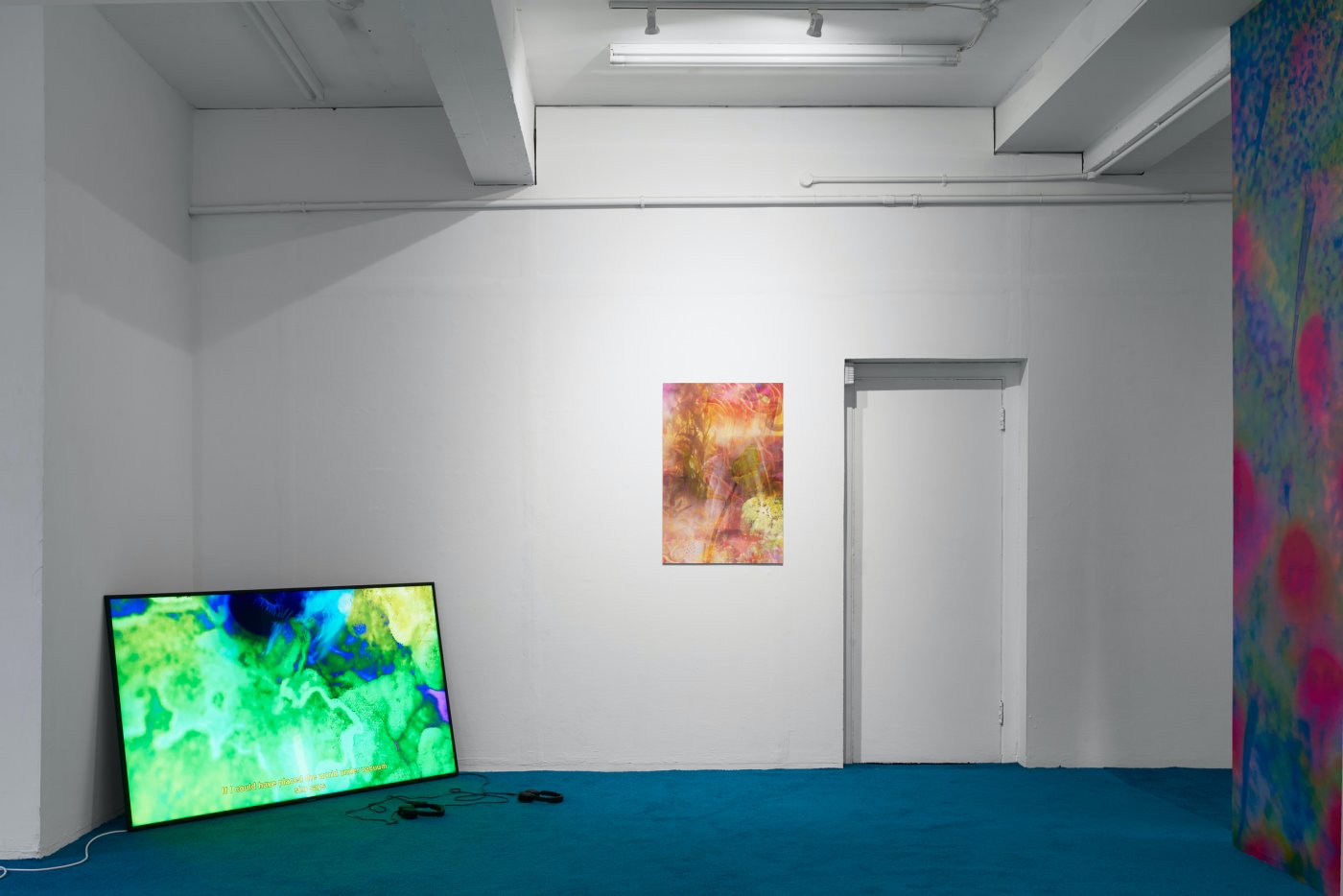 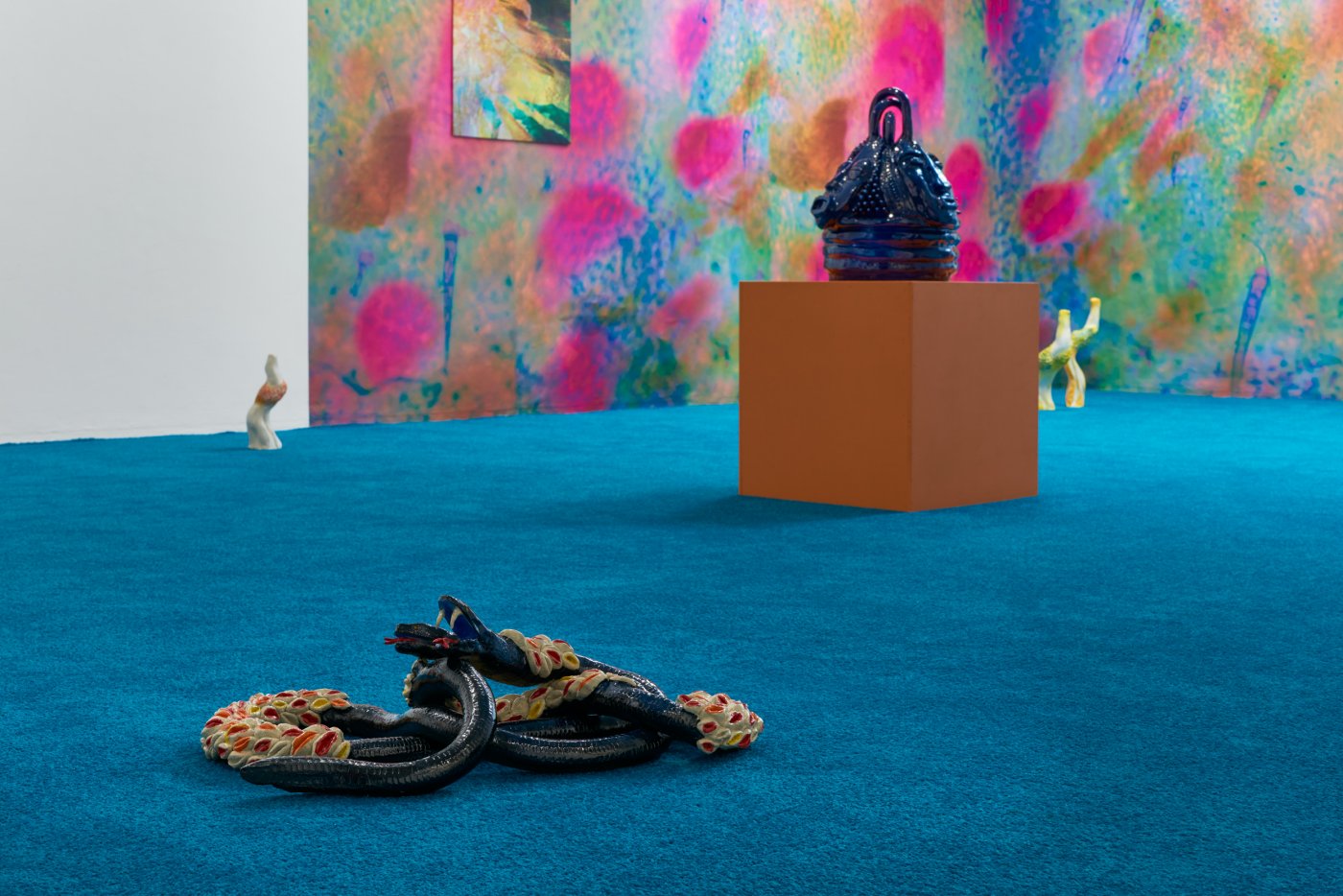 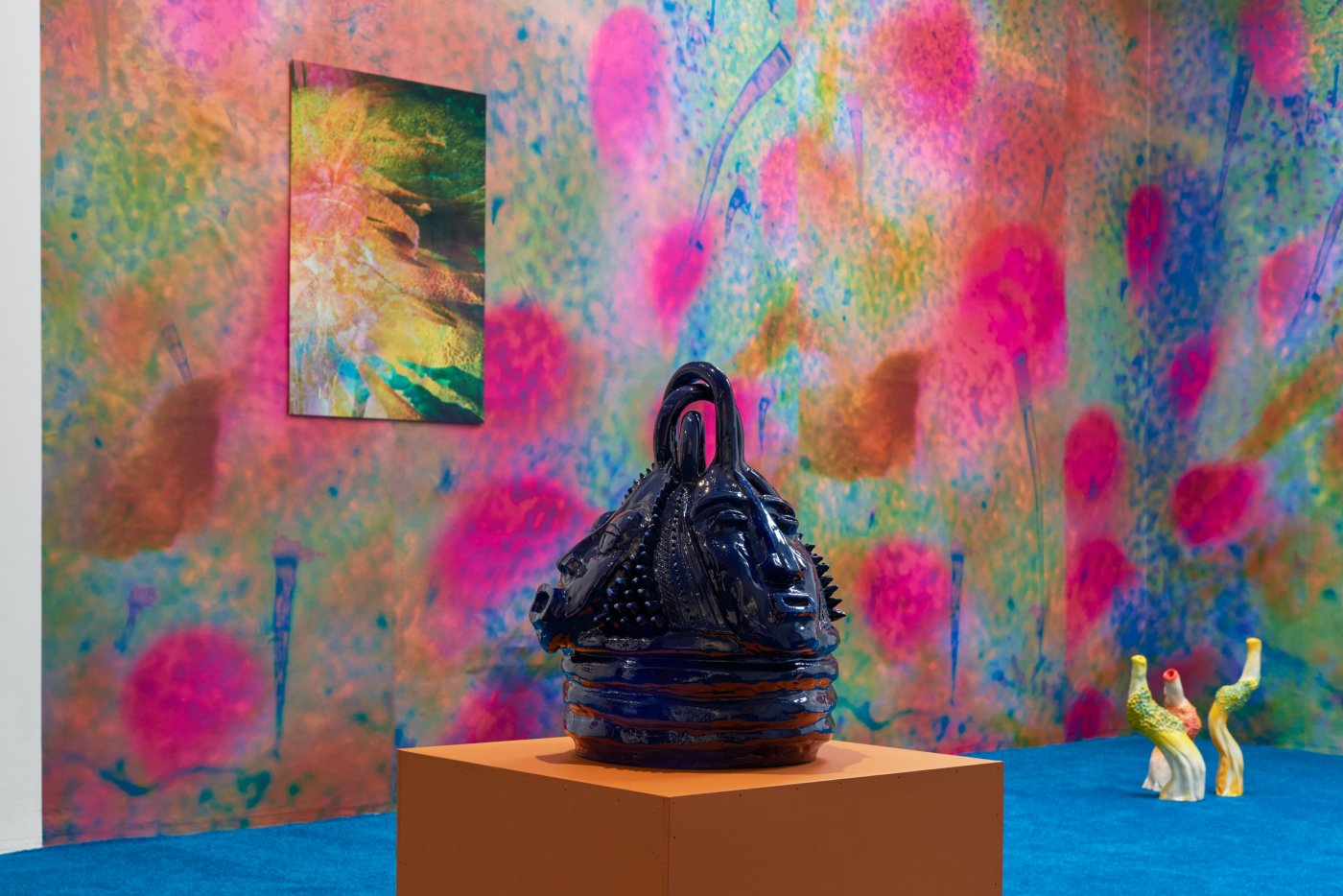 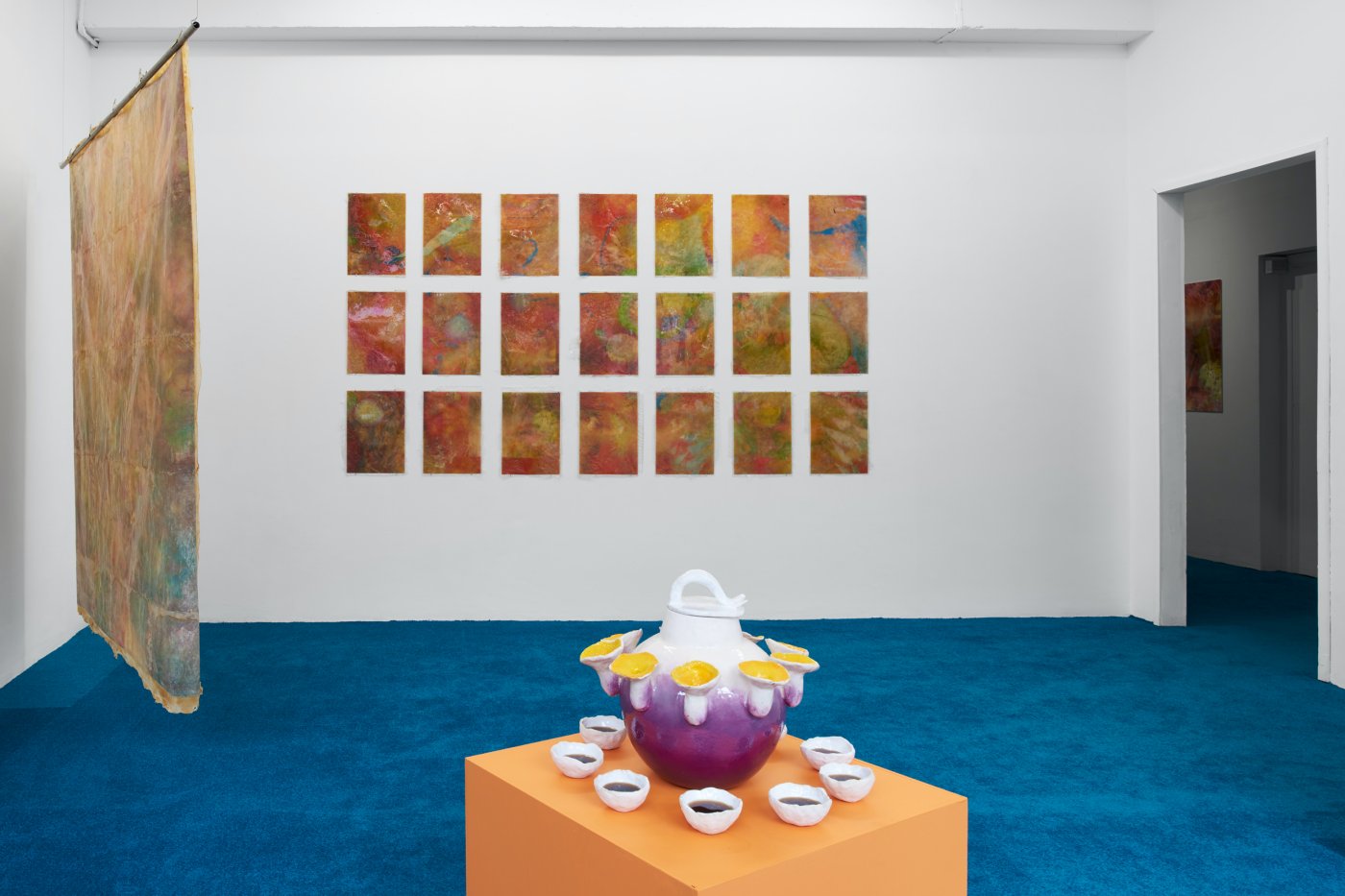 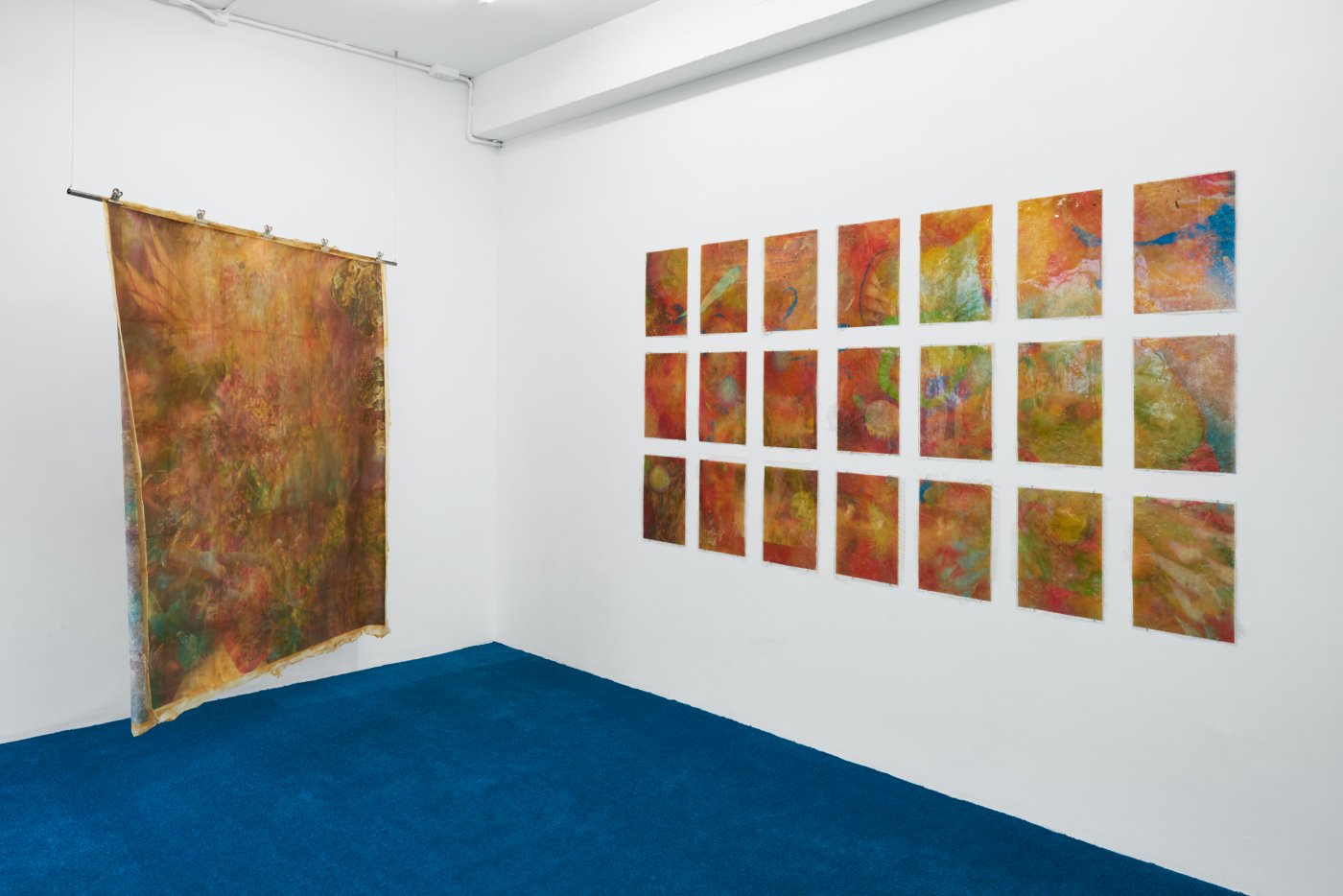 In Molecular Genealogies, her first solo exhibition at NıCOLETTı, London, Ntjam explores the history and future of emancipatory movements by weaving multiple narratives drawn from African mythology, ancestral rituals, the wars of independence in Cameroon, Algeria and Burkina-Faso, anti-racist activism in the US, as well as her personal and family archives. Through a newly commissioned series of sculpture, photomontage, film and sound, Ntjam reassesses the genealogies of these stories and events in light of research into molecular biology and quantum physics that she pursued with the Arthur B. McDonald Canadian Astroparticle Physics Research Institute at the Agnes Etherington Art Centre, Ontario, in Jan–Apr 2021. The resulting artworks tell a story of co-dependency between science, history and fiction, conflating microscopic views of plants and rocks with ancient deities and political activists within a display that Ntjam conceived as a futuristic ‘maquis’ – the scrublands or jungles where resistance fighters escape the forces of power by mimicking natural elements and blending in with their environment.

Ntjam introduces this resistance tactic through the character of Mami Wata, a voodoo figure and fish-woman divinity venerated in much of Africa. In the first room of the exhibition, Offering to Djengou (2021), a ceramic jar with nine spouts, welcomes the viewer with a selection of beverages concocted to invoke Mami Wata’s spirit and condition our bodies for future revolts. Above the sculpture, a video enumerates these potions’ recipes, listing the required ingredients to either ‘create disorder’, ‘summon our undead’, or ‘for our independence’, for which the artist recommends, for instance, a mix of ‘crushed plantamisée flower + elderflower + castor-oil branch + sunflower’, which should then be ‘applied as cataplasms on our monuments.’ (2)

Mami Wata reappears as a three-headed figure in Jengu – Mami Wata (2021), a ceramic sculpture evoking the divinity’s multiple identities in African mythology, where she can be alternatively represented as a monster, a mermaid, a dangerous woman or a saviour – as Ntjam explains, ‘Mami Wata has as many stories as there are people telling it’. Referencing Léopold Moumié-Etia’s book Jengu – Mammy Water (1981), in which the Cameroonian writer describes Mami Wata as a ‘being that can be either masculine or feminine… with very dark skin… but which can, at will, turn white’, Ntjam’s work invite us to emulate the goddess’ capacity to remain ungraspable, constantly changing her appearance, gender and attitude to avoid being assigned a single position and origin.

Similar ideas of fluidity and hybridity are being examined through sculptures of plants and animals, including a group of flowering mushrooms, sprawling algae, and a contorted snake called Nummo – the name of a Dogon spirit often taking the form of a hermaphroditic, fish-like creature. Questioning the categories in which scientific reasoning tends to circumscribe beings and things, Ntjam’s sculptures also allude to the techniques of camouflage, mutation and adaptation performed in nature. As she explains, ‘I often refer to plants, animals, and organic materials and substances found at a microscopic level – molecules, particles, etc. – as I’m interested in how their evolution and techniques of survival and multiplication reflect certain modes of resistance and action that have been used by minoritarian and oppressed groups of people across history.’ (3)

Throughout the exhibition, Ntjam speculates on the possible interconnectedness of historical mechanisms, natural organisms and molecular processes in a series of photomontages printed on various materials such as rice paper, latex, and Chromalux aluminum panels. Made of archival photographs and 3D scans of objects and vegetal elements, Ntjam’s photomontages conjure an opulent universe in which, collapsing the micro and the macro, documentations of riots and portraits of political dissidents merge with an array of abstract cellular shapes, mythological animals, equatorial plants and computer- generated jellyfish. Moumiémone (2021), for instance – the title is a contraction between the name of Cameroonian writer and militant Marthe Ekemeyong Moumié and an anemone –, shows an aquatic landscape in which digital renderings of snakes and closeup images of crystals are layered with photographs of Huey Percy Newton (1942–89), the co-founder of the Black Panthers, and Harriet Tubman (1822–1913), an American abolitionist who rescued 70 enslaved people using the Underground Railroad networks. In other works, Ntjam juxtaposes images of particles and screenshots of digital glitches with figures such as the American political activist Angela Davis (b. 1944), Félix-Roland Moumié (1925–60) – an anti-colonial leader assassinated in 1960 by the French secret services –, and Yasuke, an African who visited Japan in the 16th century and became the first Black Samourai.

Composed of interlacing narratives, organisms and substances, Ntjam’s photomontages dive into the microcosmic to capture the sparkling textures of personal and collective memories. Through cultural and biological worldbuilding, the artist fragments the chronological unfolding of history in an attempt to find, in its breaches, the gateways towards new modes of being and belonging.
In Molecular Genealogies, the establishment of a parallel between molecular processes of division, coagulation, proliferation – e.g. the human blood coagulation system –, and the micro-organisations that spread within disparate cells of society to infiltrate political bodies, remaps history into a space of uncertainty that constantly shifts and mutates, alternatively reverting, accelerating and springing simultaneously in multiple places, like an electron in an atom.

Beyond the seas, unaligned spaces, absolute dissolution of our absurd times, labels have been erased by a time- consuming acid. They, we, you, I, no pronoun will ever be able to confine us now. Ah! You didn’t expect it. Not being able to assign us, to dissect us, a word after another. We’ve slipped through your pores, eroded by these whispered cycles of history.