Jose de Jesus Rodriguez: Back on the Inside

Jose de Jesus Rodriguez: Back on the Inside

GAVLAK presents Back on the Inside, the gallery’s first solo presentation of the work of Brooklyn-based artist José de Jesus Rodriguez. 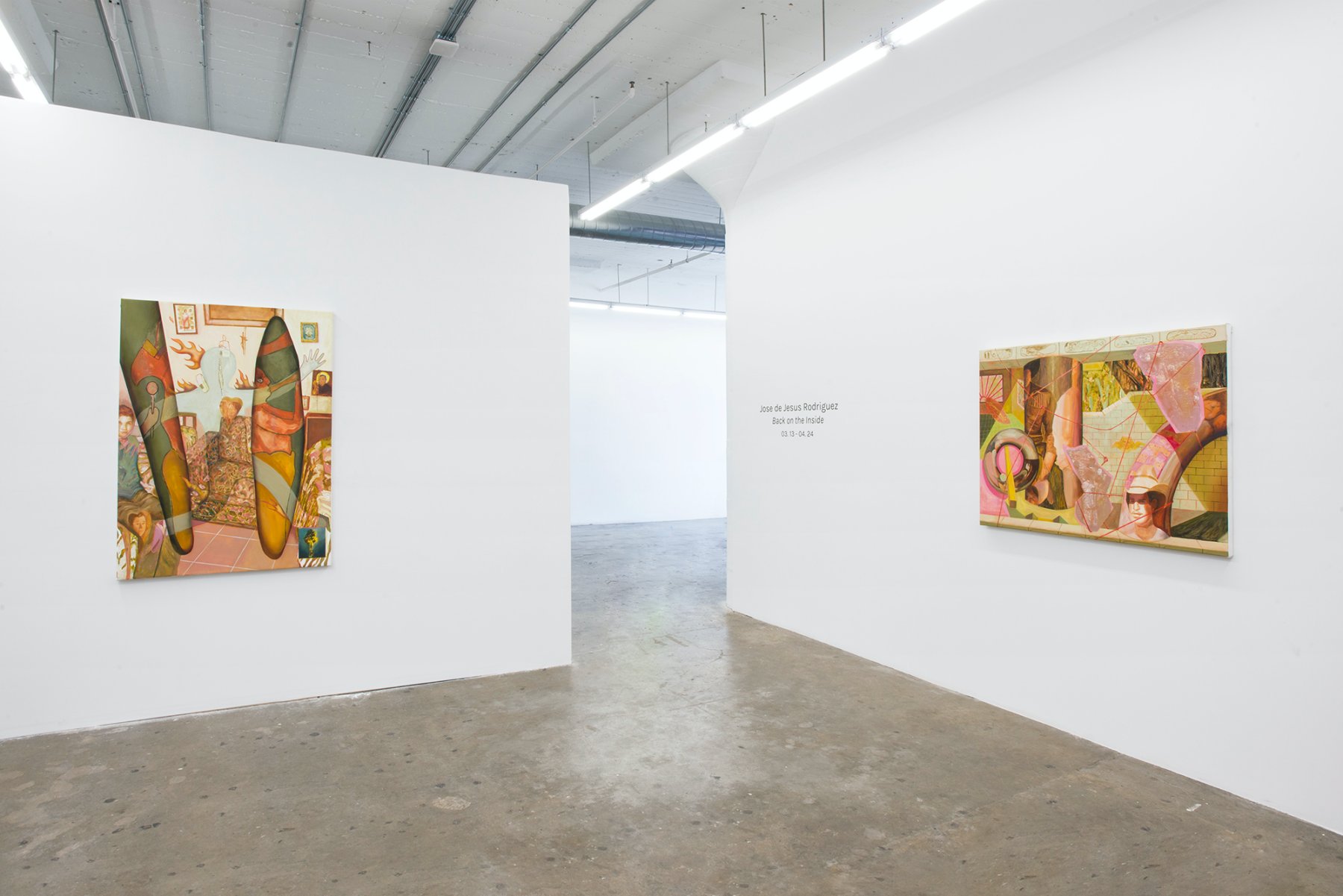 Four new paintings (all 2021) demonstrate Rodriguez’s facility in styles ranging from abbreviated line drawing to mimetic realism. The coexistence of these distinct approaches within the same picture plane serves as a reminder that all images, no matter how simple or sophisticated, compel belief. By incorporating a range of images that have become shorthand for Chicanx experience in American visual culture, the artist underscores how the repetition of these symbols coalesces into ideology. With every stylistic shift Rodriguez demands the viewer reconsider the effects familiar iconography produces.

The warm sepia tones coursing through I’m not a burning man, I’m a burning, man infuses the domestic interior with nostalgia, as do the muddled floral patterns of the furniture crowding the small room and the religious icons hanging slightly cockeyed on the wall. A watchful child bearing a woman’s portrait on his knee peers from behind one of two lozenge-like shapes that dominate the foreground, each displaying half of a red figure recalling those of the murals of the ancient Mayan city of Bonampak. A cartoonish silhouette leaps the expanse between the two beds, chameleonically taking on shades of everything it touches, trailing flames from its shoulders while a crucifix pirouettes above.

From this rendering of his great-aunt’s bedroom Rodriguez transports us to her funeral procession in Clean on the Inside, Cream on the Outside, where the faces of mourners clad in white turn inscrutably away. A visual quotation of a Diego Rivera mural rendered in pinks and oranges inside a teardrop-shaped enclosure follows closely behind, the individuality of the faceless laborers within similarly obscured. Lines created by carving into dried paint with woodcut gouges produce effects similar to relief prints, while on the opposite side of the canvas an object similar to a folding screen contorts a naturalistic desert landscape rendered in stormy shades of ochre, further compounding the multi-dimensional space of the composition.

In both his individual practice and his work as a community-based arts educator, Rodriguez has absorbed the technical and ideological particularities of socially engaged art forms ranging from Mexican Muralism to the 1930s printmaking collective Taller de Gráfica Popular. In producing paintings that engender doubt in the relationship between truth and appearances, he proposes alternatives to the uncomplicated visions of collectivism these initiatives promoted, suggesting that dissonance speaks to the realities of contemporary subjects better than harmony.

José de Jesus Rodriguez (b. 1991, Salinas, California) lives and works in Brooklyn. His work was featured prominently in recent group exhibitions for Company Gallery, New York; Richard Heller Gallery, Los Angeles (2021) and Charles Moffett Gallery, New York (2018). In 2018 he was an artist in residence with the Sharpe-Walentas Studio Program, New York. He was a teaching artist with Groundswell, a New York City-based community arts organization from 2014-2018. Rodriguez holds an M.F.A. from Yale University and a B.F.A. from the University of California, Santa Cruz.

Installation view, Jose de Jesus Rodriguez: Back on the Inside, 2021, GAVLAK Los Angeles