rosenfeld presents ‘Falling’ the gallery’s first solo exhibition of the Spanish artist José Castiella. The artist shows paintings and a selection of his ‘coffee’ drawings in the exhibition. 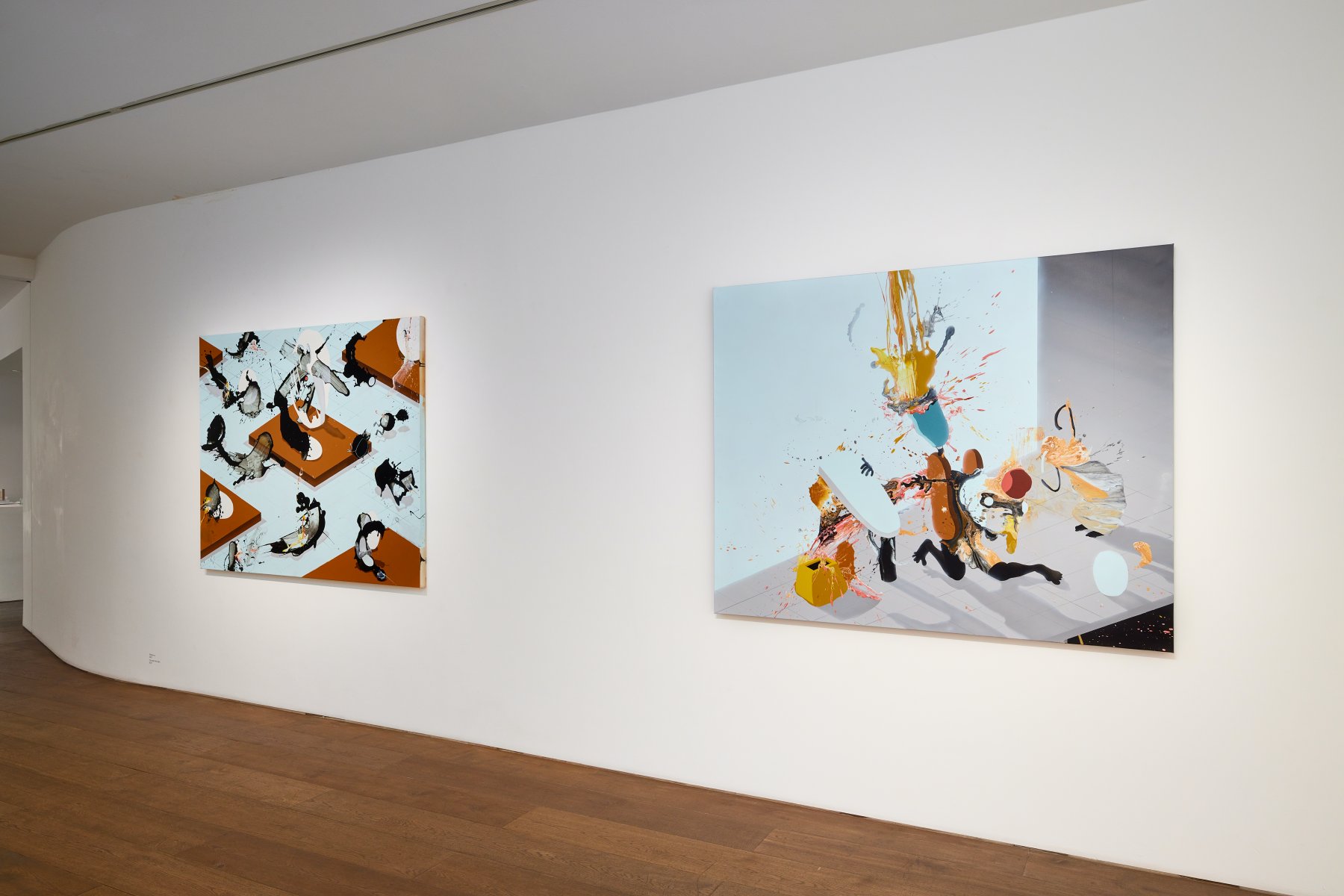 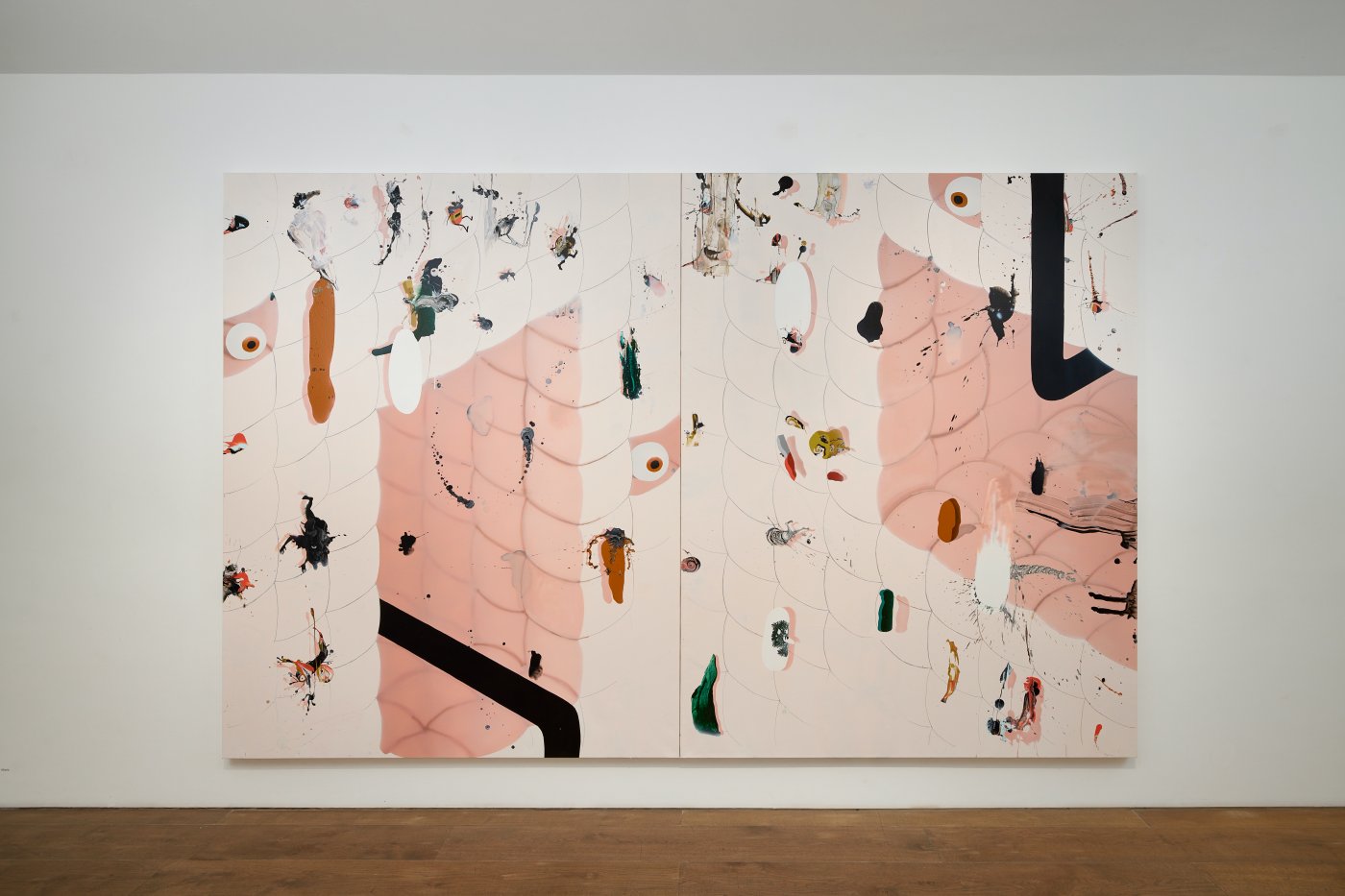 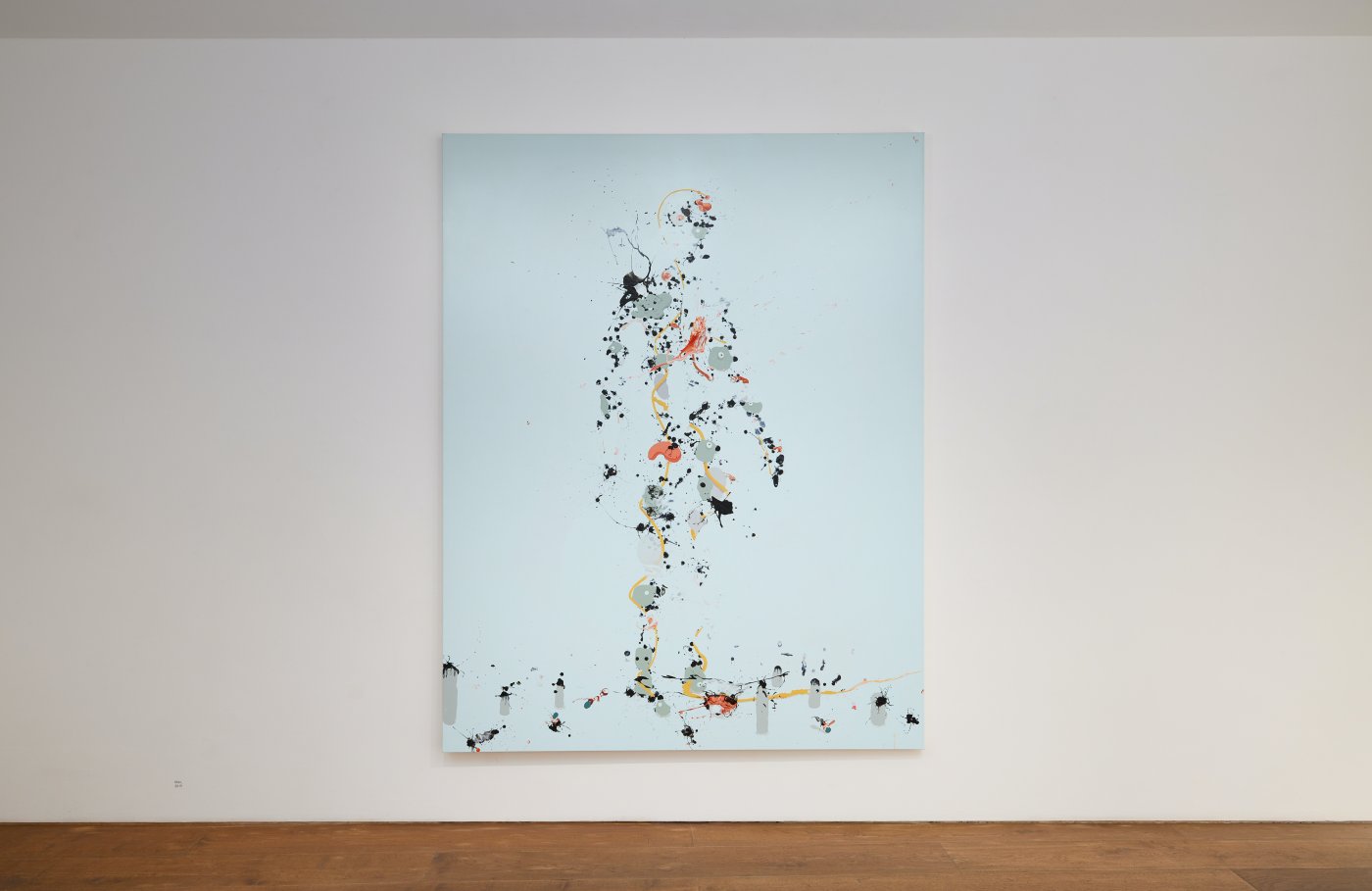 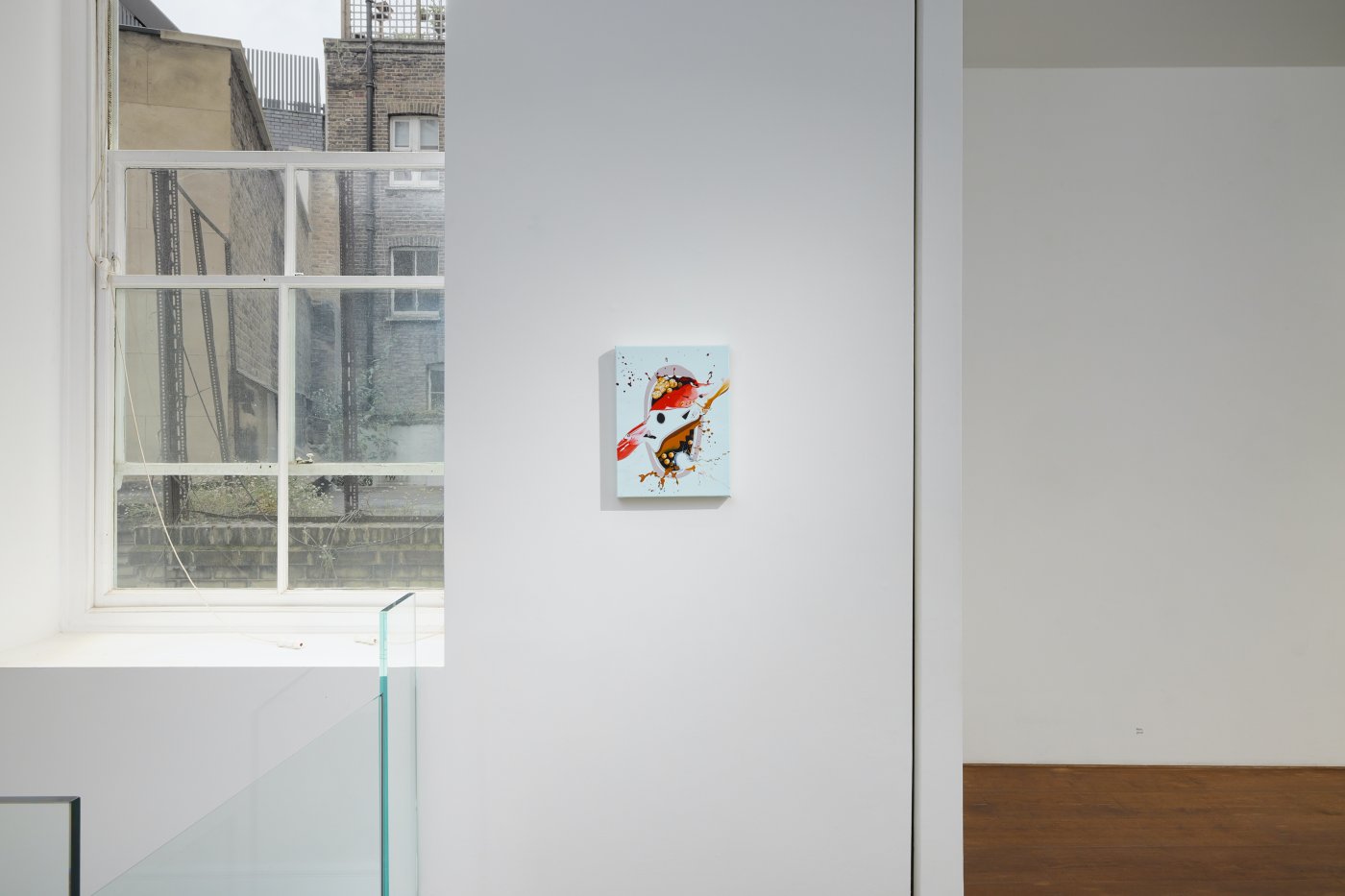 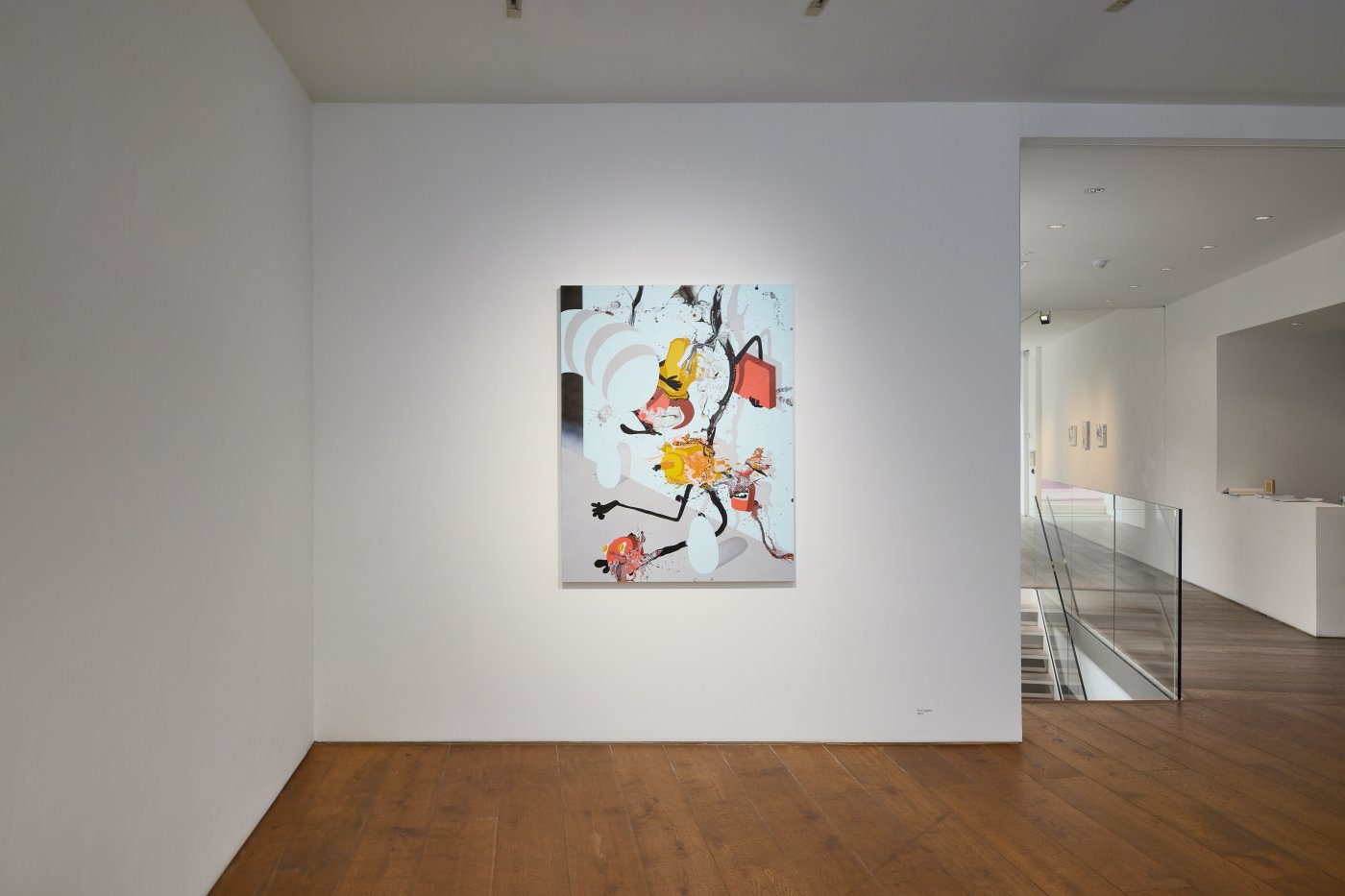 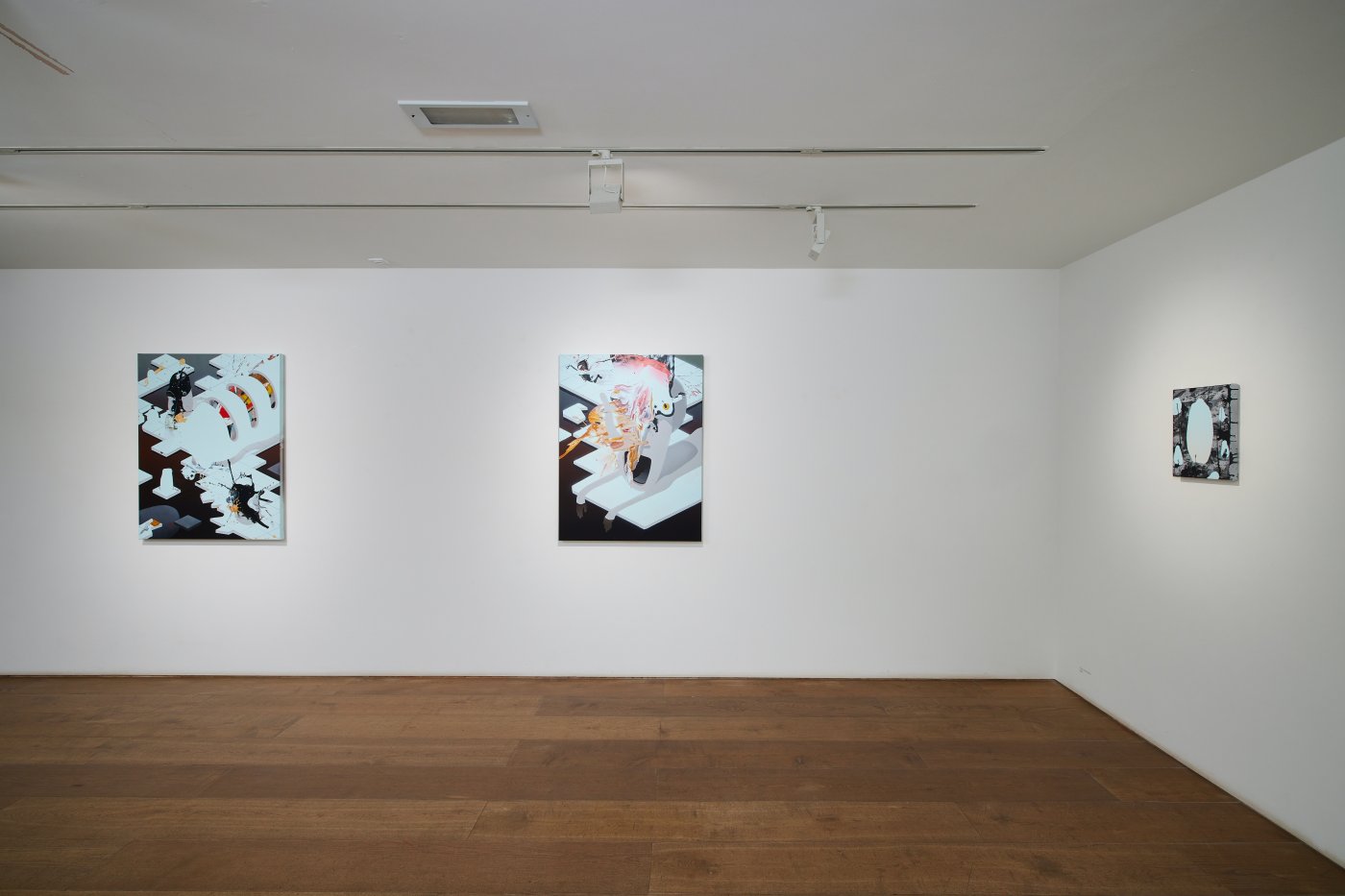 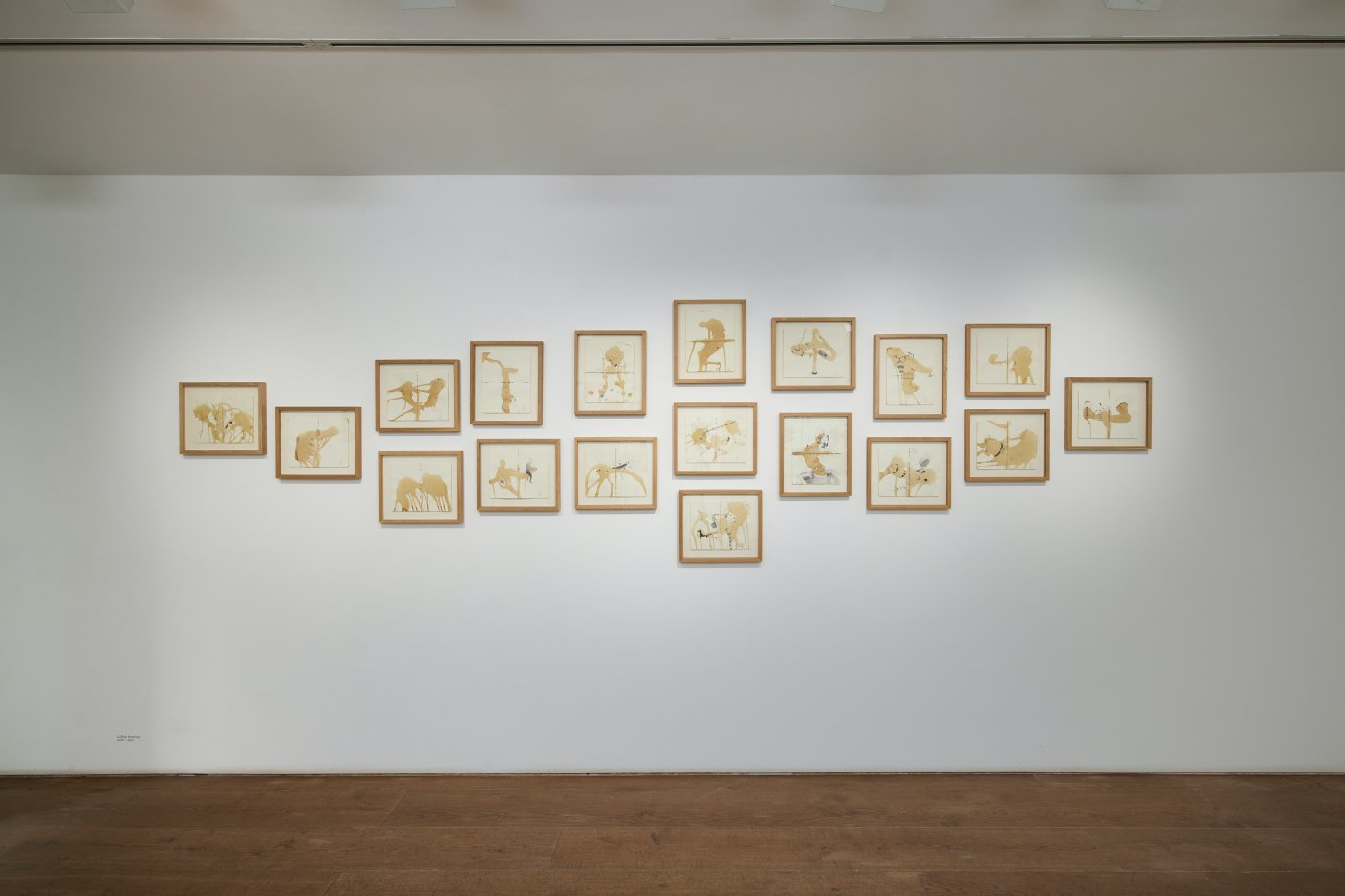 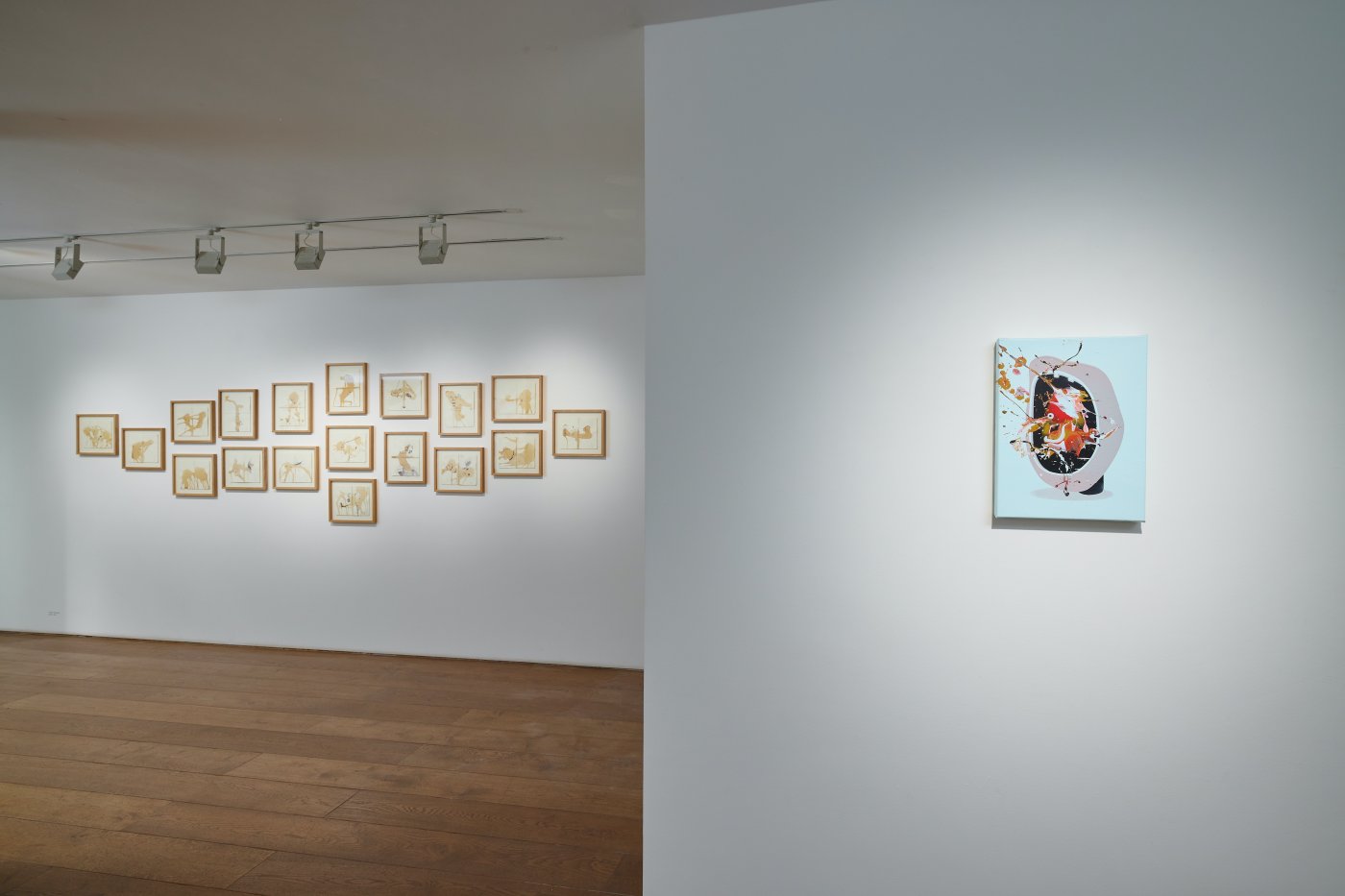 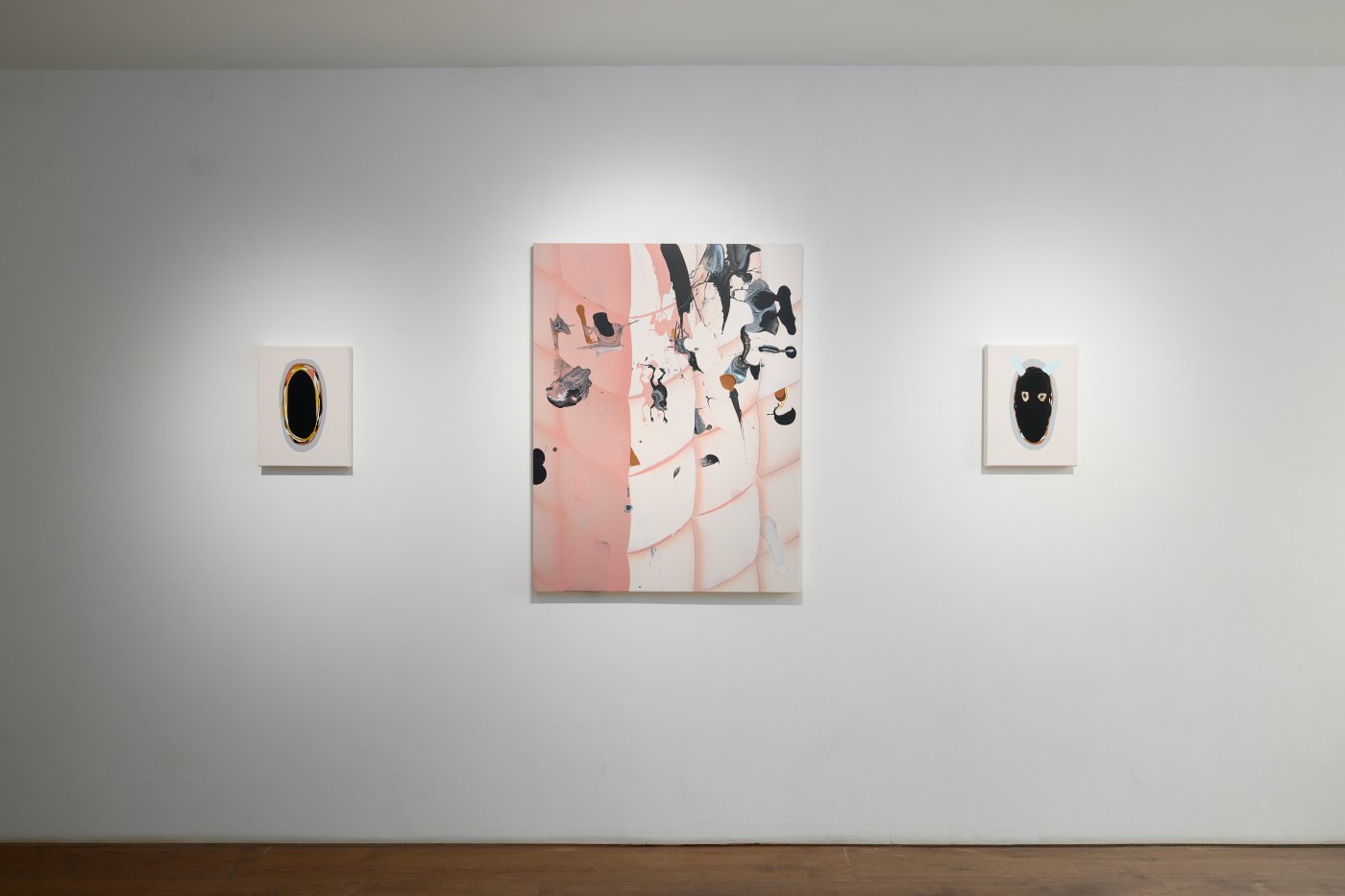 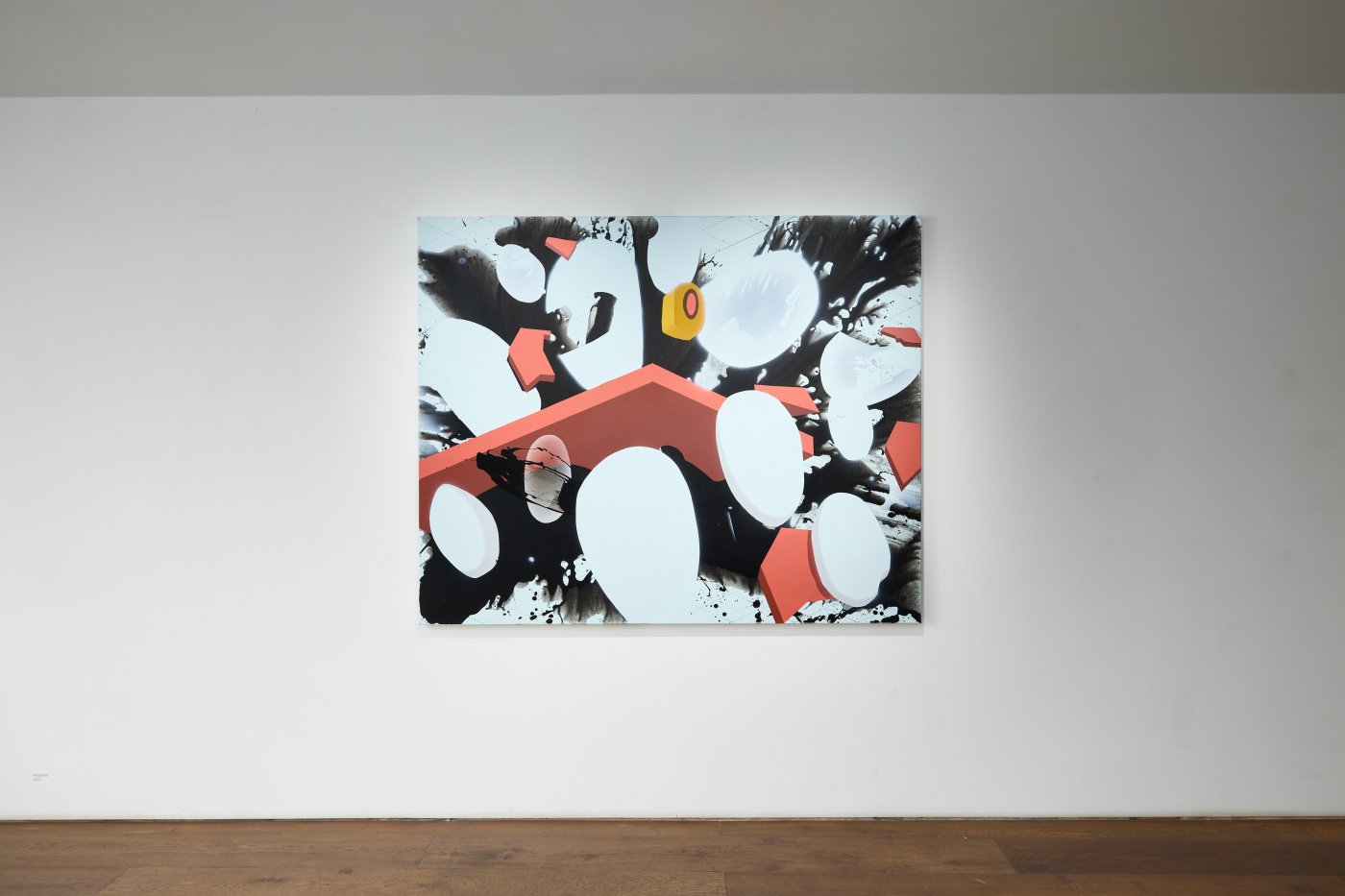 Influenced by such widely disparate sources as Hieronymus Bosch, Bruegel, animation, video games and the Japanese Yōkai spirits his works are the result of pure chance at the same time as an attempt at controlling the process as it unfolds. Initially the canvas is laid on the floor as Castiella pours on the paint before placing the work on the wall and waiting for the paint to begin its mysterious journey in a totally autonomous way. Each individual work is, for the artist, a voyage of discovery as his own contribution is intrinsically related to the effect of the paint as it travels down the surface of the canvas. Castiella’s interventions change continuously as the painting achieves new unforeseen forms.

The artist’s world is populated by a plethora of strange, surreal figures as if we are getting a glimpse into a past-apocalyptic world after a climactic disaster or another more lethal virus has taken hold. The variously formed monsters, on occasions sporting a hand, foot or one bulbous eye appearing mysteriously from random blobs of paint. However, often these figures make us smile which points to a further influence in Castiella’s work; the idea of the tragi-comic which is a thread present in both Spanish theatre and cinema. The artist presents us with a total world view which, on occasions, is terrifying and yet on others wins us over with its macabre humour. Bosch’s blackness is tempered by Castiella’s interest in Japanese mythology and the figures of Yōkai, spirits which can be malevolent but also mischievous, friendly or even helpful to humans.

The artist’s prowess with line, shadow, volume and transparency is testament to his previous slavish copying of Old Masters. This combination of a highly technical and supremely proficient painter combined with the freedom which his ‘modus operandi’ gives him seems a unique and endlessly fascinating combination; an endless tension between the desire for freedom and the need for control.

The main work in the exhibition is a diptych entitled ‘Waiting on a padded abyss’, where each canvas measures 250x195cm. This hugely ambitious composition displays the artist’s endless inventiveness but also his ability with space, line, form and colour presenting us with a Kafkian tragi-comic world view with an extraordinary array of strange creatures scrambling up and down the padded net which covers the pictorial surface. Based on the geometric idea of a spider’s web, this device gives the artist a perfect mechanism to explore the dichotomy between structure and chaos which is so fundamental to him.

Throughout all the works on show, the artist’s continual ability to explore and expand his pictorial language whether in paint or in the drawings builds up a continuous tension over the fate of these wildly deformed characters as they emerge grasping for life from the all-engulfing presence of paint.

The ‘coffee’ drawings provide a fascinating glimpse into the spontaneity in Castiella’s working method utilising both a more concise form as well as the medium of water colour which allows him even less possibility to exert his desire to control. Looking at a series of these works shows the line that ties them to Goya’s ‘Disaster of War’ etchings although, as with his paintings, black humour tempers the more purely black and tragic works of Castiella’s monumental predecessor.